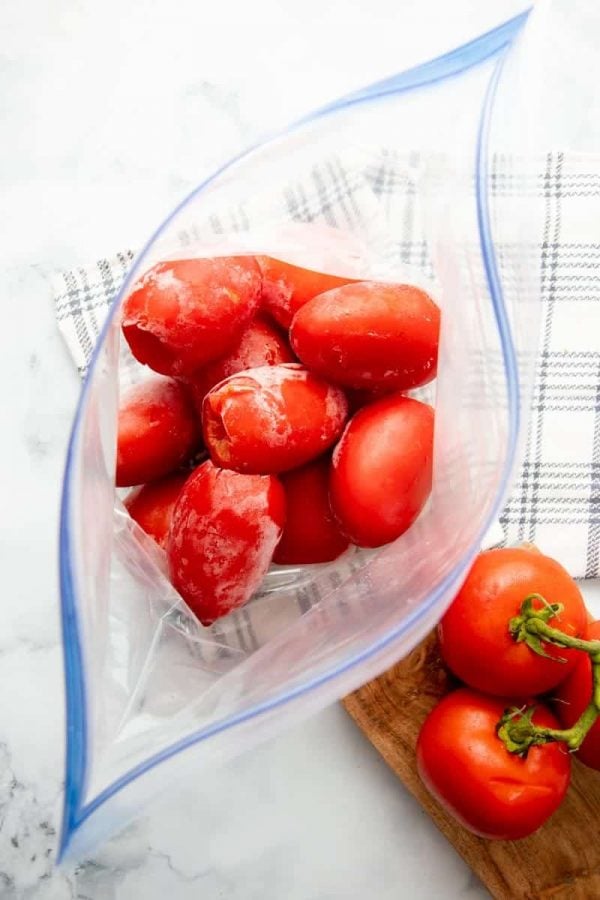 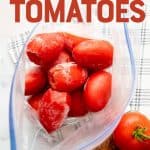 I’m relatively new to the world of tomato freezing, but now that I’ve started, I’ll never go back! Freezing tomatoes is one of the easiest ways to preserve a windfall of tomatoes—no blanching, no peeling, just freeze and go. The tomatoes that come out of the freezer work perfectly in place of canned tomatoes in soups, stews, and casserole dishes.

Freezing tomatoes is also a handy trick if you are trying to stockpile enough tomatoes to use for canning tomatoes. As you harvest tomatoes, pop them in the freezer, and once you have enough for a batch of diced tomatoes or salsa, you bring them out and get to canning! 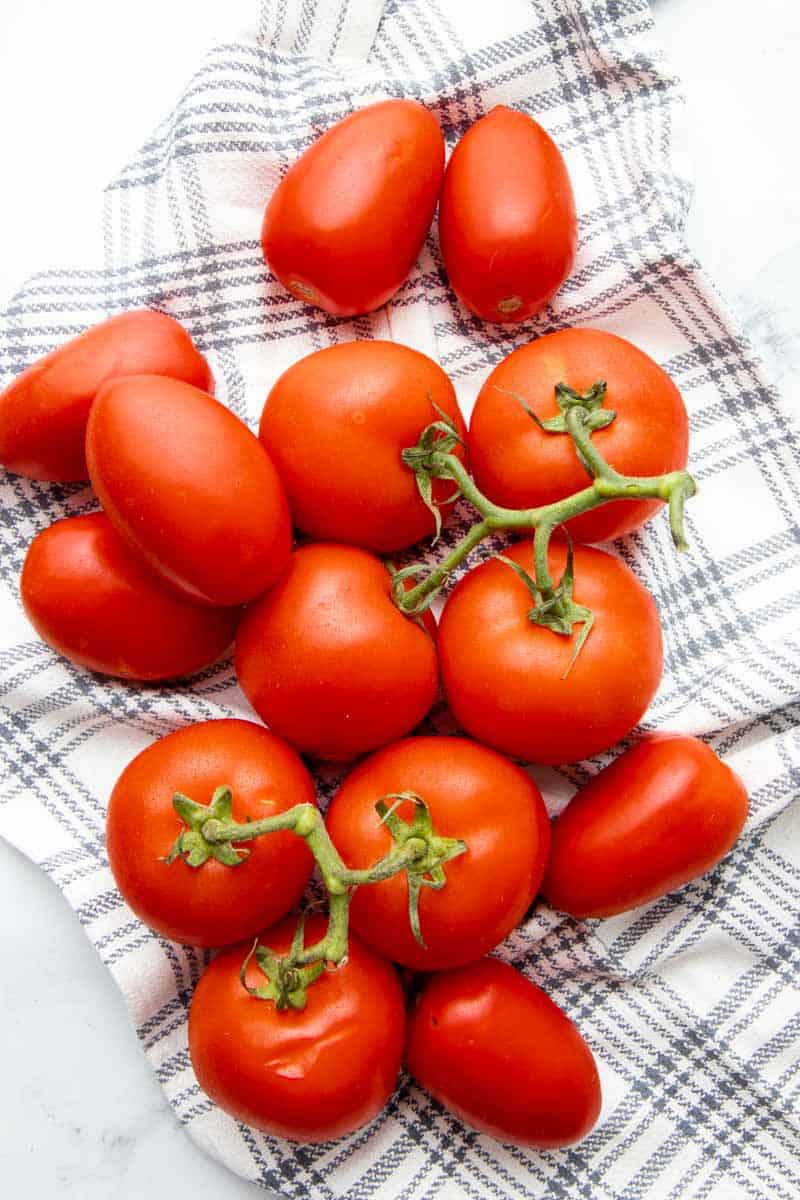 How do you prepare tomatoes for freezing?

Prepping tomatoes for freezing is way less labor-intensive than preparing for canning tomatoes. Use a small, sharp knife at an angle to remove the core at the stem end. And then…that’s it! You’re ready to freeze some tomatoes! 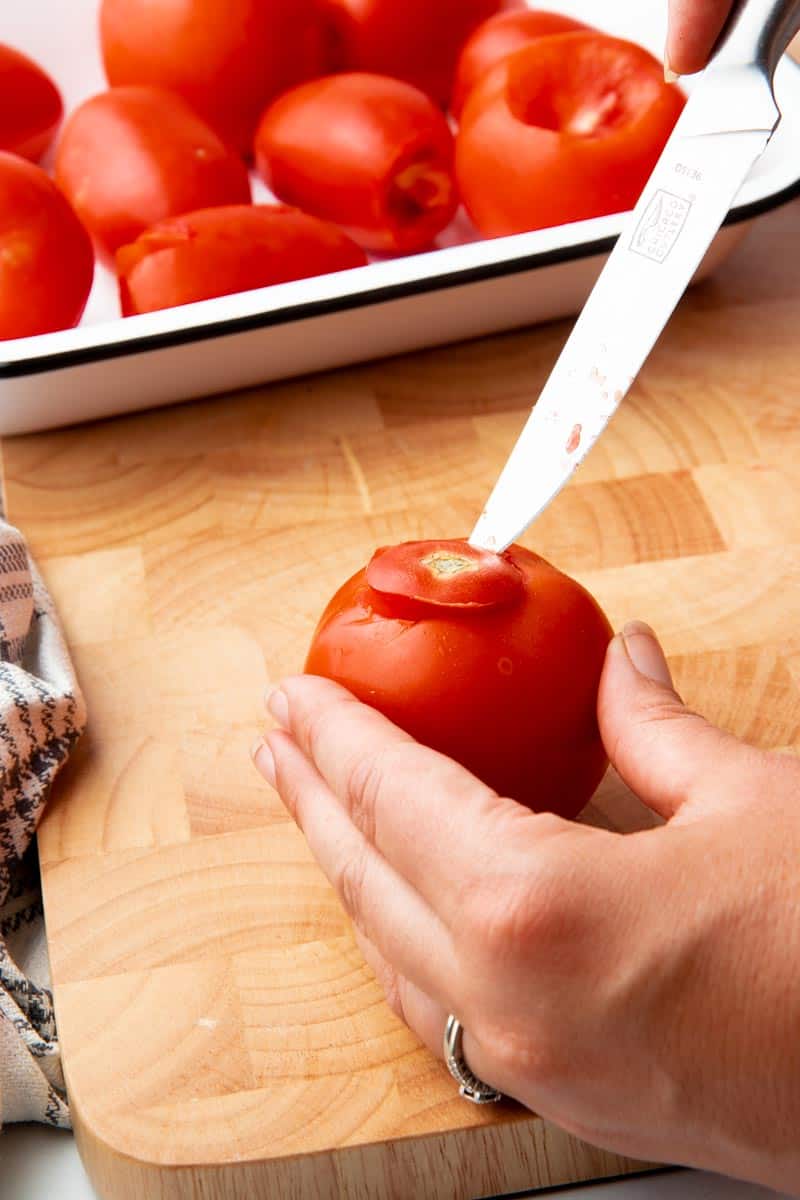 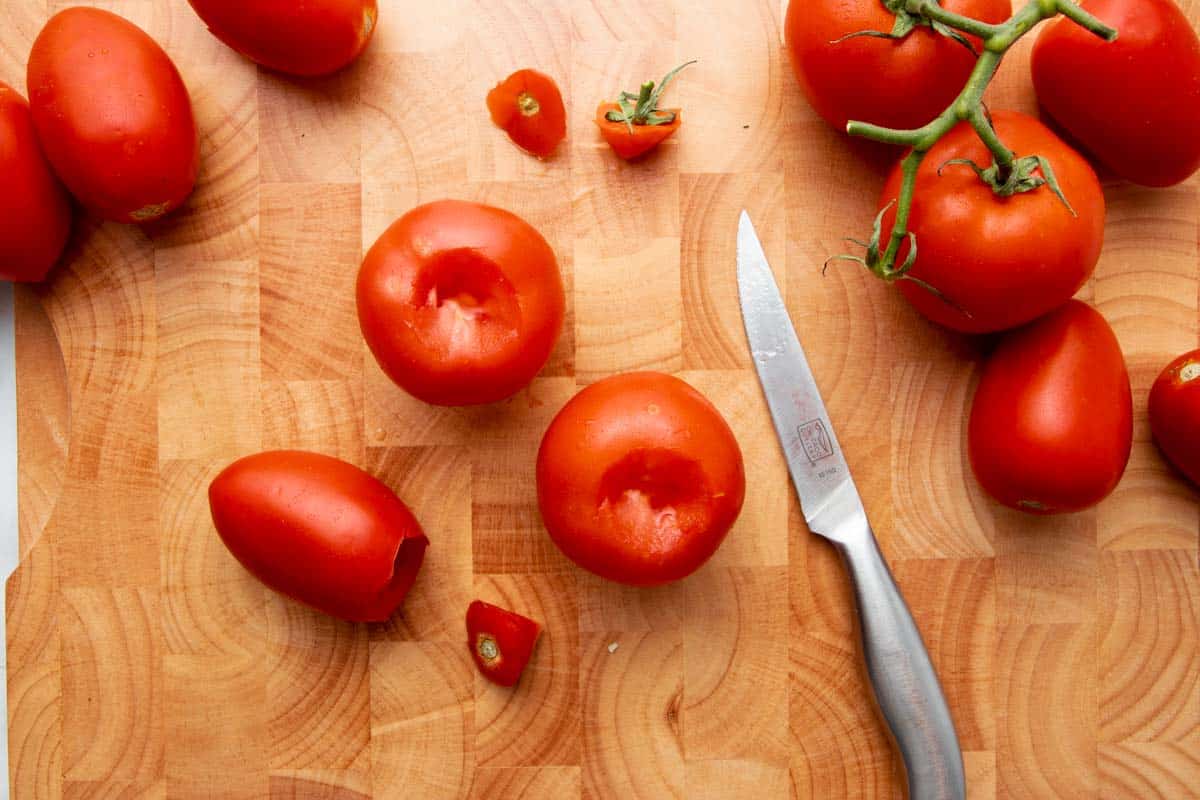 Do I need to peel the tomatoes first?

I don’t peel tomatoes when I freeze them. In fact, freezing makes it super easy to get the skins off when it is time to cook—so it wouldn’t be a good use of time to try to peel them beforehand. Instead, when you are ready to use your frozen tomatoes, you can rinse them in water for about 10 seconds, and the peels should slip right off!

Can you freeze cherry tomatoes?

Sure can! If you have an abundance of cherry tomatoes, you can do this with them as well. I will say that coring and peeling tiny tomatoes is a bit more tedious than working with the big ones, so you might want to find another way to use up your cherry tomatoes. We suggest our Lemon Orzo with Shrimp and Tomatoes!

Is there a way to freeze tomatoes without blanching them first?

Absolutely! You can skip the blanching entirely when you’re freezing tomatoes. The point of blanching when you are canning tomatoes is to remove the skins. The process of freezing and thawing makes the skin slip right off without any blanching. 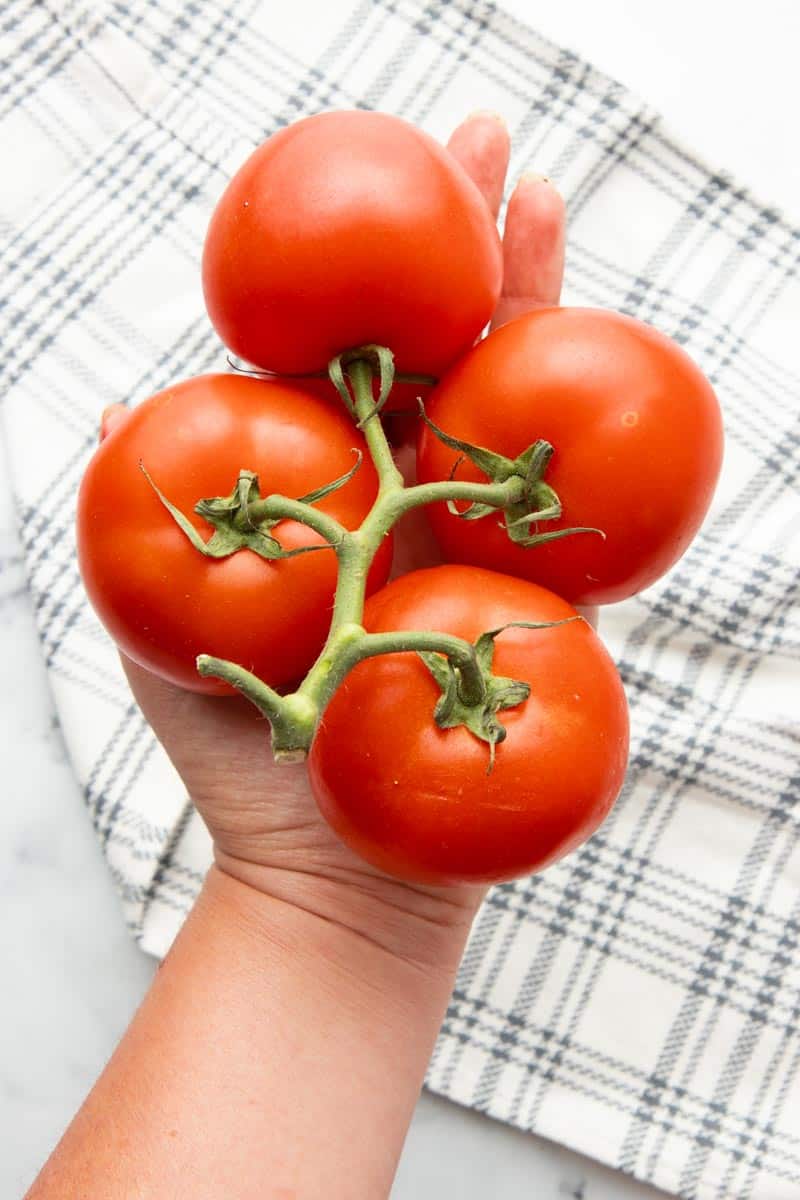 Okay, teach me how to freeze tomatoes!

Ready for some super-speedy tomato freezing? Here’s what you’ll do: 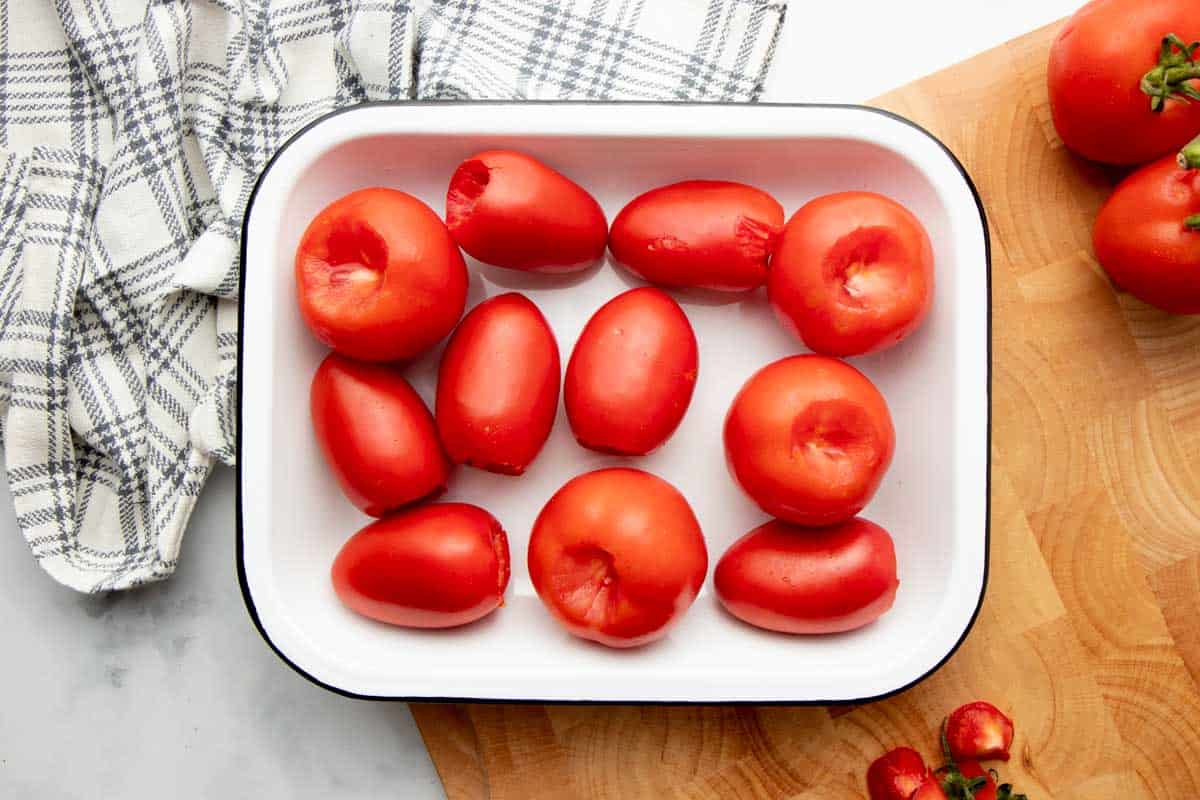 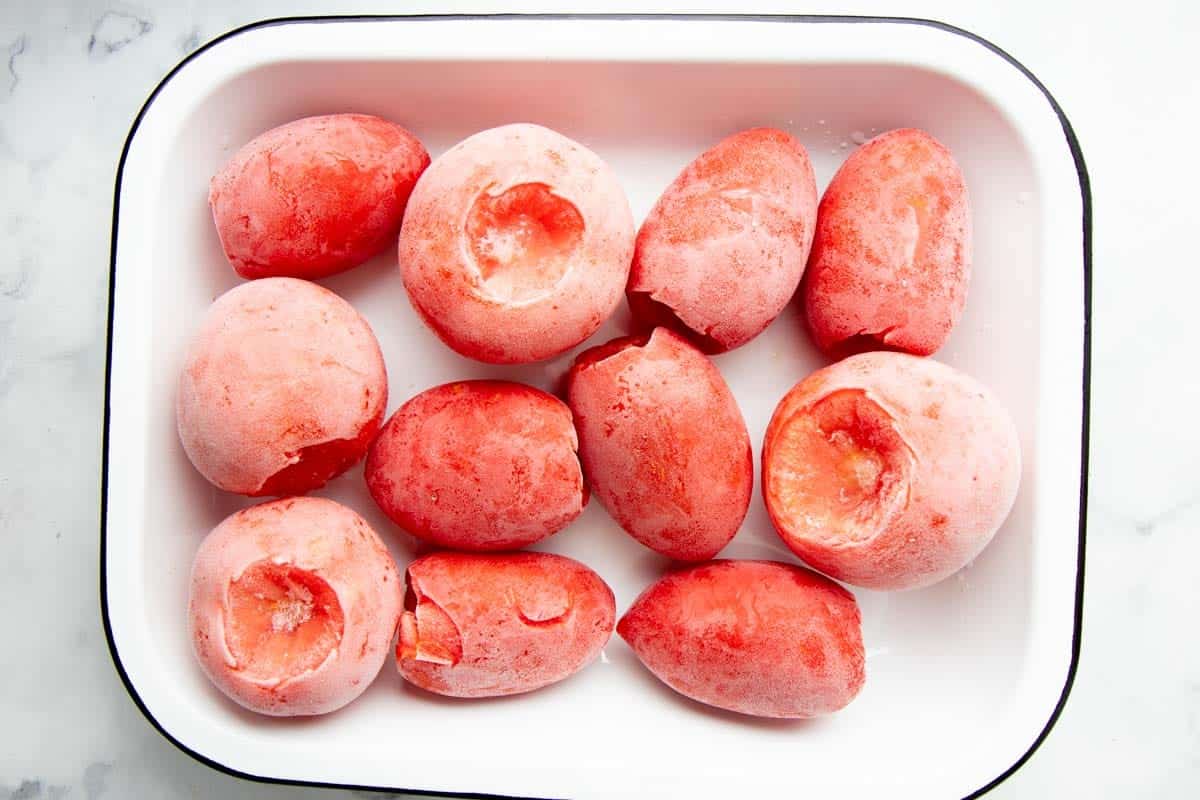 What containers should I use to freeze tomatoes?

There are lots of ways to freeze tomatoes! Here are four of my favorites: 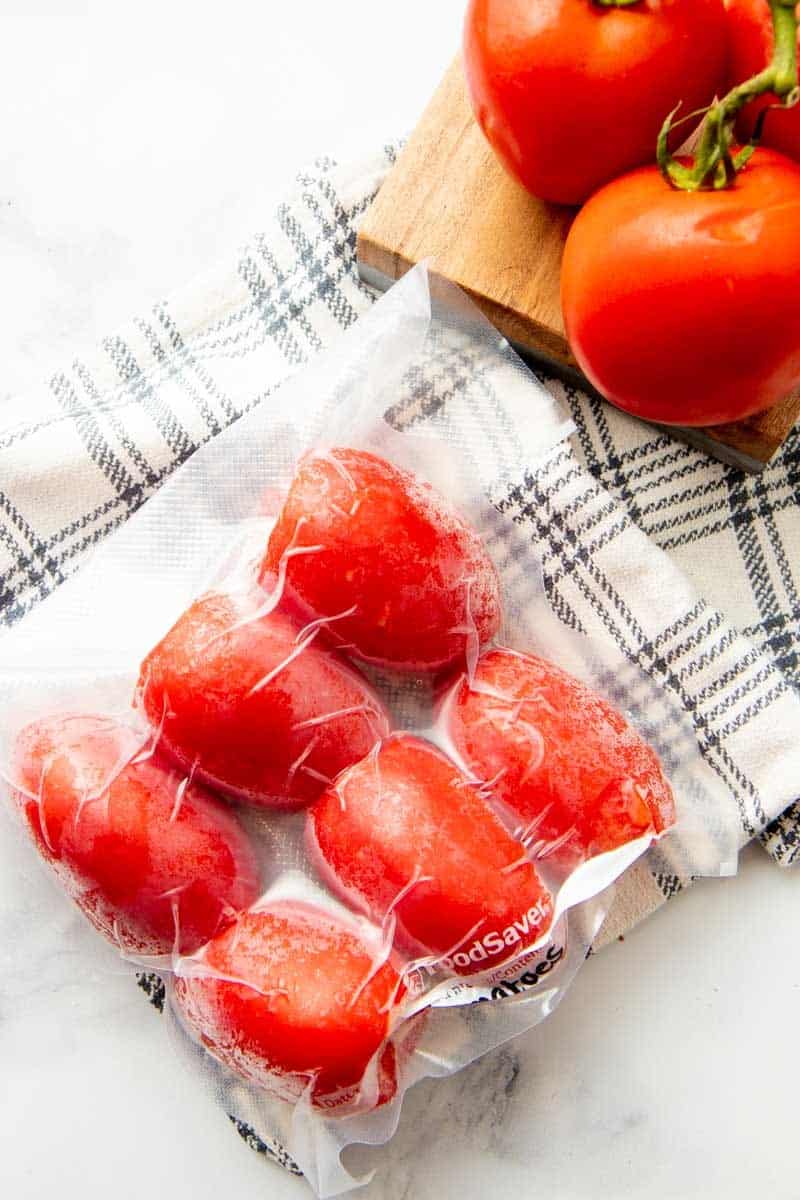 How long do frozen tomatoes last?

Without vacuum sealing, you’ll want to use your tomatoes within about 8-12 months. If you have vacuum sealed your maters, you can get as much as 2-3 years out of them!

How do you thaw frozen tomatoes?

Place the tomatoes in a bowl on the counter or in the fridge and let thaw. The skins will slip right off, and you can then dice or smash the tomatoes to use them. Make sure to toss the juice into whatever you are making—that’s packed full of flavor! 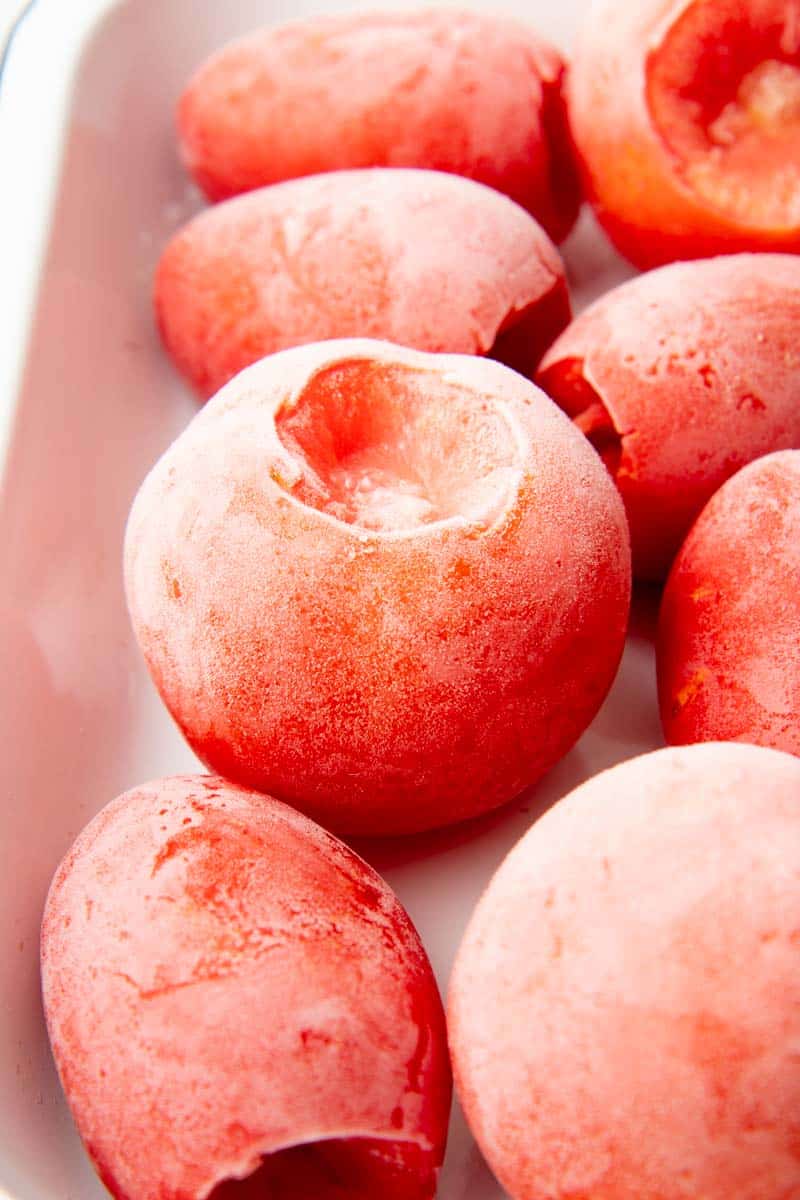 Can I use them frozen?

Sure can! And, in fact, for many purposes, you don’t even need to thaw the tomatoes before using them! Just run the frozen tomatoes under cool water for about 10 seconds to slip off the skins, and then toss them whole (and still frozen) into soups, stews, or sauces. Depending on how you’re cooking them, the tomatoes may fall apart, or you might need to smash them with a spoon or potato masher.

How can I use frozen tomatoes?

Alright, now that your freezer is stocked with vine-ripened tomatoes, what do you do with them all? Well, you can use them whenever you’d use canned tomatoes. Here are some options:

This can be done for any amount of tomatoes, as long as you keep them in a single layer on your baking sheet for the initial freeze. This may require you to do the freezing in batches.

To peel your tomatoes, rinse the frozen tomatoes under water for about 10 seconds, and the peels should slip right off.

Frozen tomatoes will be good for 8-12 months with most freezer containers or bags, though they will last for 2-3 years if vacuum sealed.