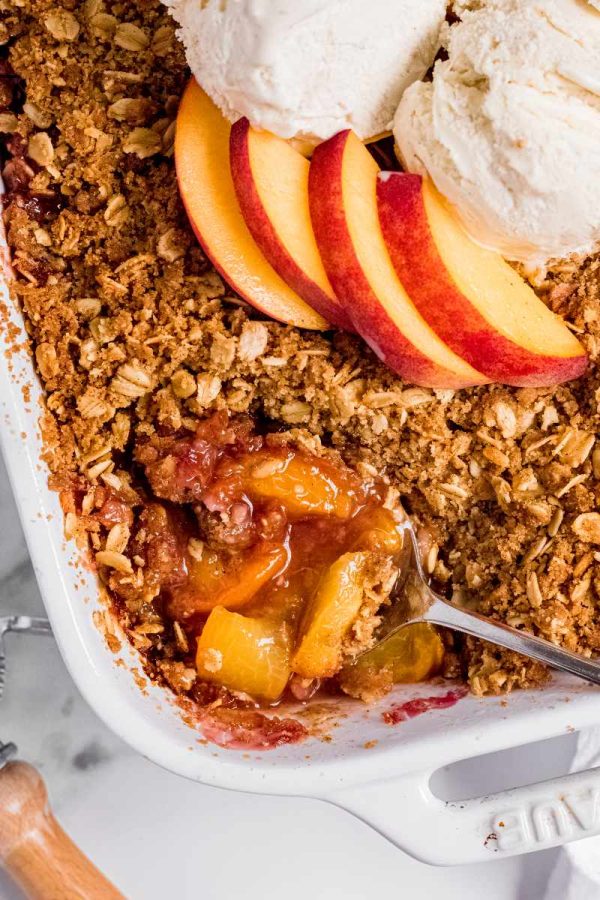 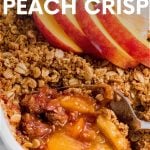 Homemade peach crisp is the perfect summer treat. It’s easy to make, and you can’t beat the taste of fresh peaches covered in a crispy, crumbly, cinnamon and brown sugar crust. This recipe makes the best peach crisp and is one of my favorite easy summer desserts!

What is the difference between a peach crisp, cobbler, and buckle?

Cobblers, crisps, and buckles, oh my! There is a whole world of delicious deserts out there. 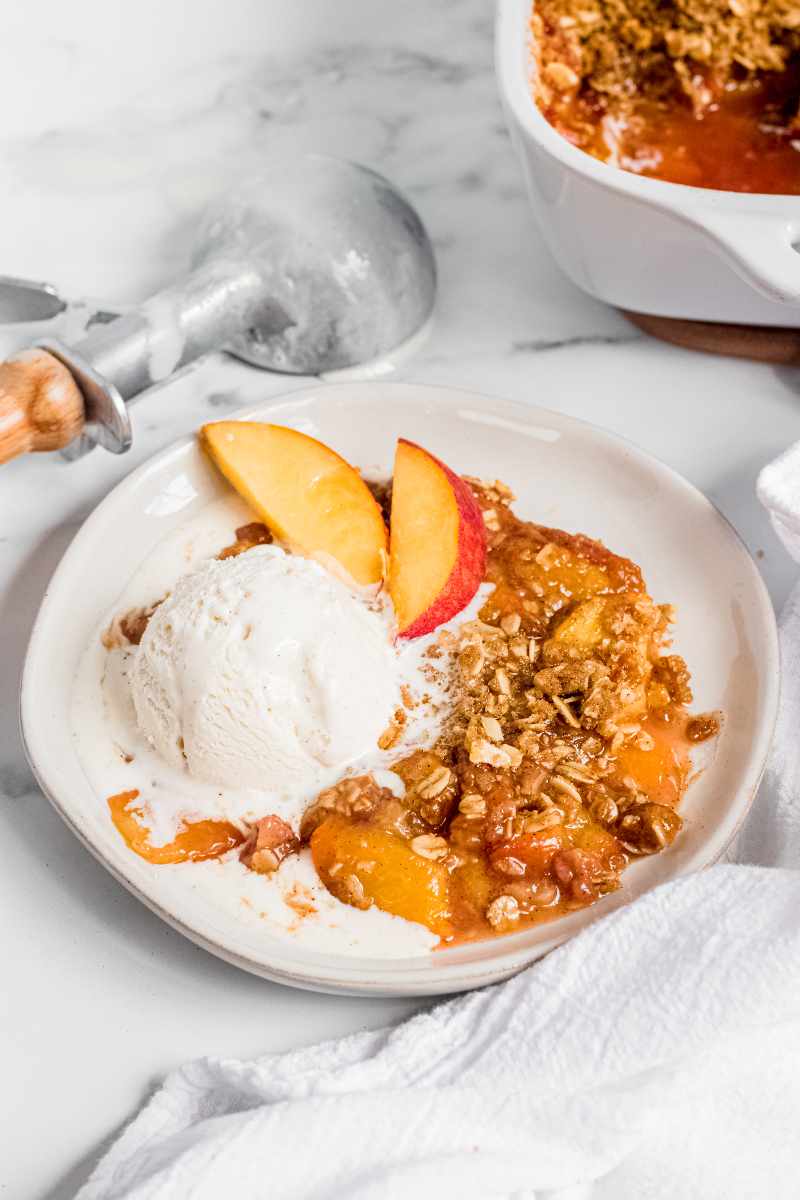 What do I need to make peach crisp?

This is a fairly simple recipe to make. In terms of tools and equipment, all you’ll need are two mixing bowls and an 8″x8″ or 10″x7″ baking dish. You’ll also need the following ingredients.

This peach crisp is delicious when served with a scoop of vanilla ice cream, some Cocowhip, or a dollop of whipped cream. 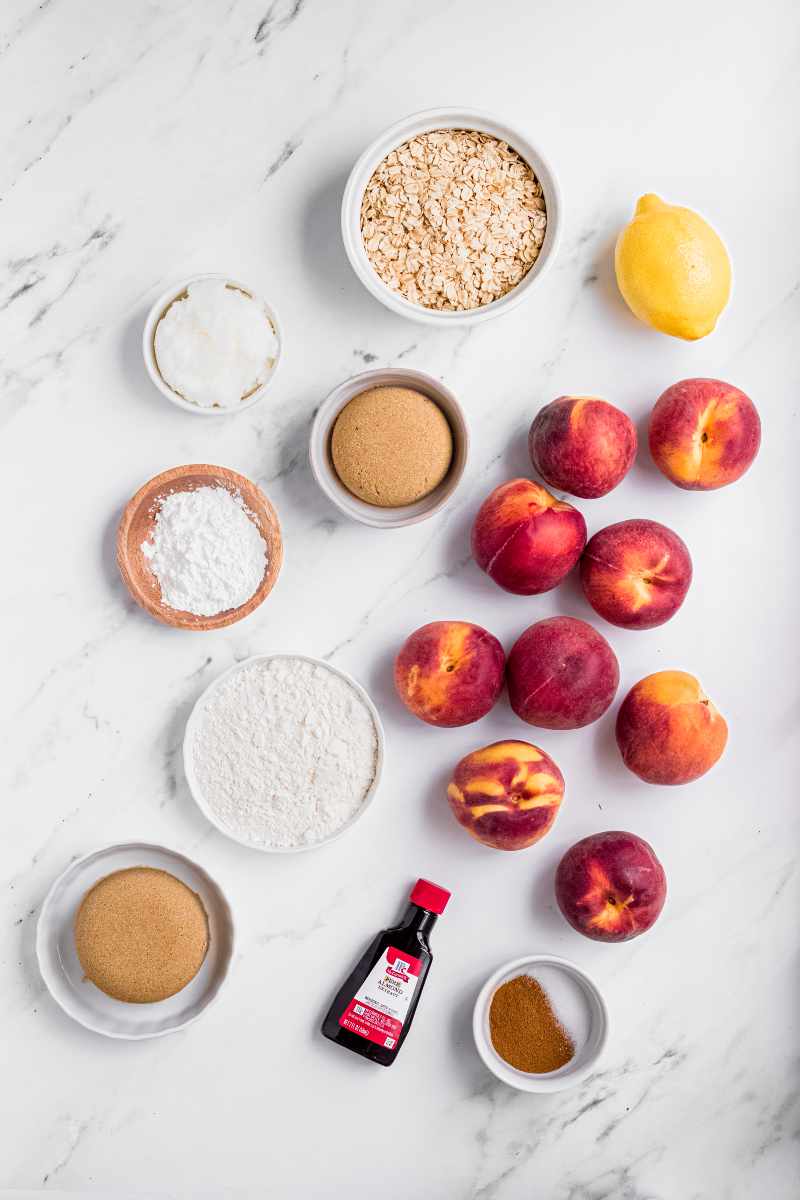 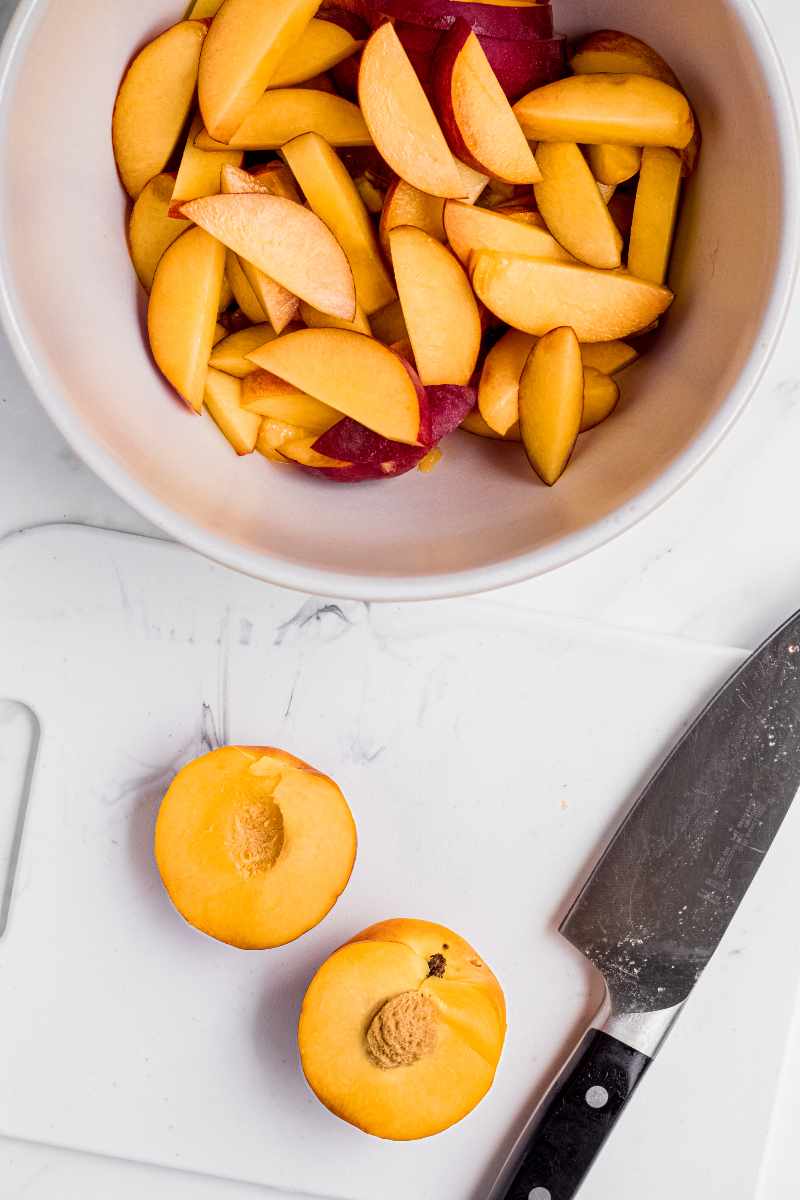 Can you leave the skin on the peaches?

Yes! One of the best parts about this peach crisp is that you don’t have to remove the skins from the peaches before you cut them. This saves you a lot of time and effort. As the peach crisp cooks, the skins break down until you won’t be able to taste them anymore.

You will still see a few red flecks in your cobbler from the remaining skin, so feel free to peel your peaches if you want to.  The easiest way to remove the skin from peaches is to boil them in water for 30 seconds before dunking them in ice-cold water. This allows the skin to slip right off.

How do I make peach crisp?

Uh, this seems like a LOT of crisp topping.

It is! This peach crisp recipe makes more topping than you might think you’ll need. Trust me when I say it’s worth it to use what the recipe calls for. It’ll make a super thick, super crumbly topping to your crisp that everyone will love. 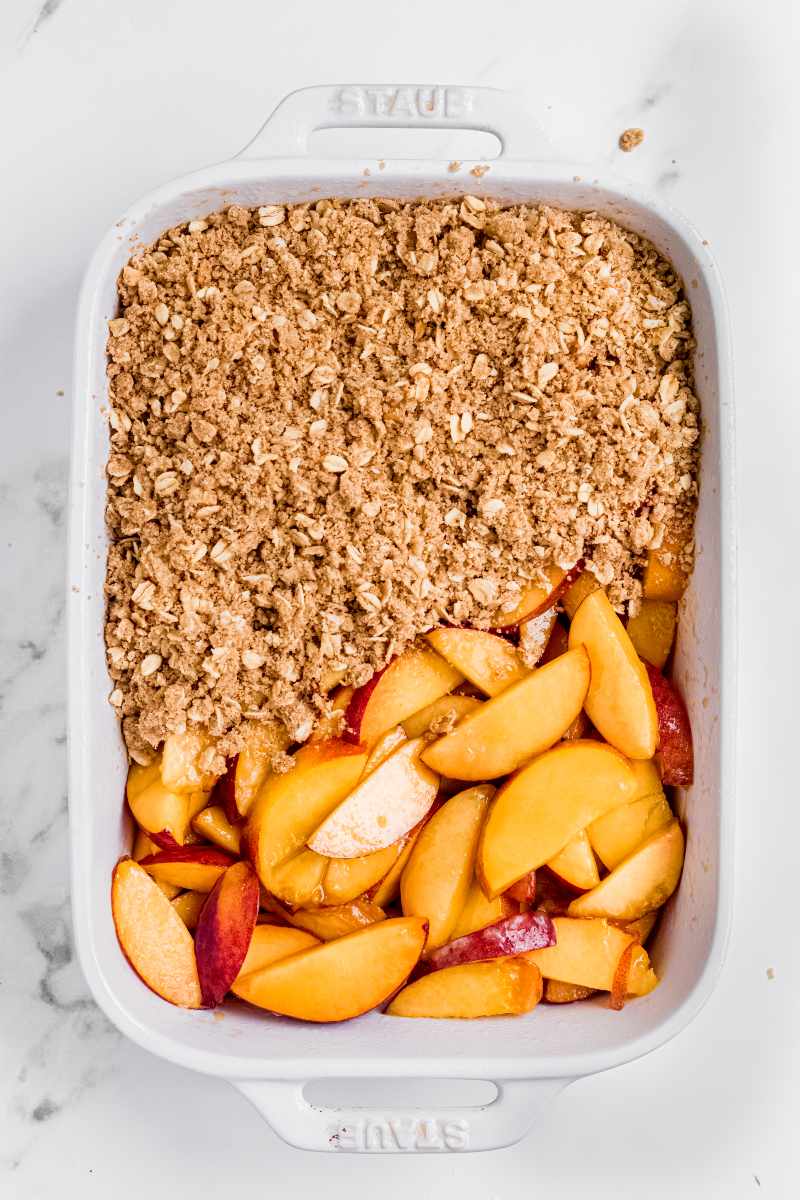 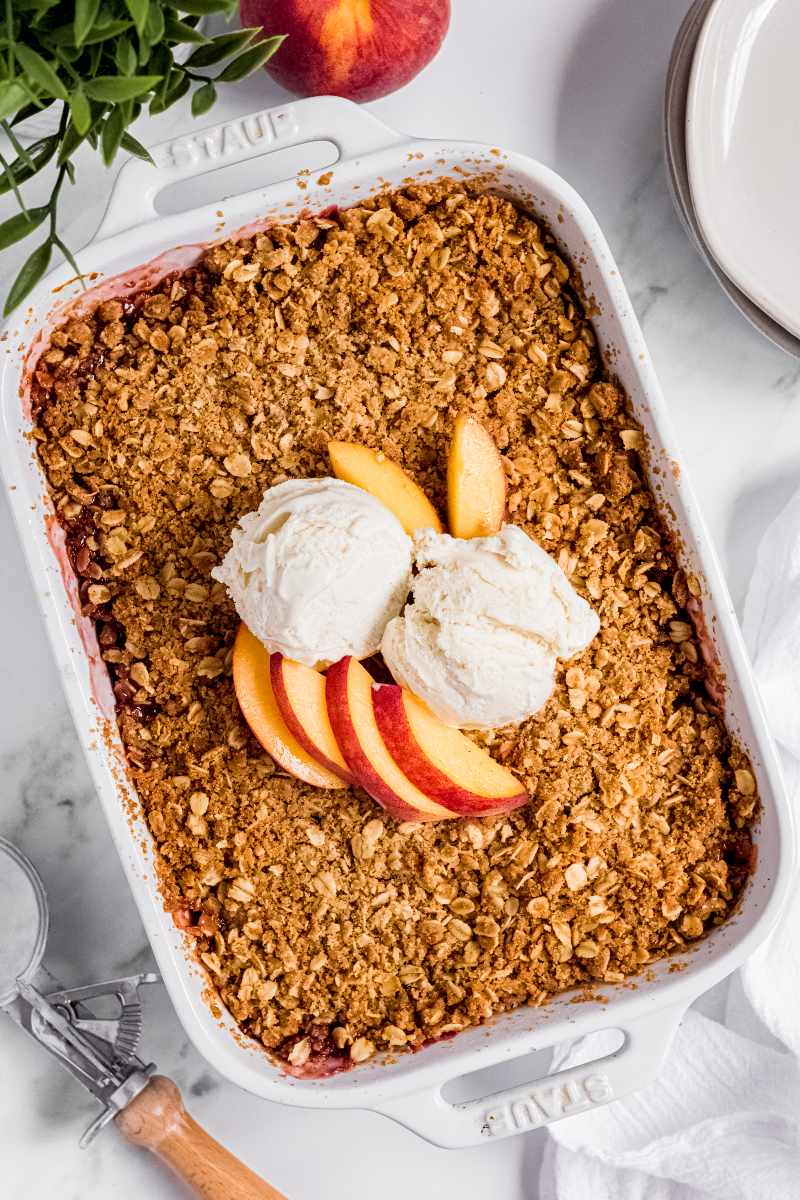 Can you substitute frozen peaches for fresh?

Yes! It’s definitely worth learning how to freeze peaches because peaches lose their freshness quickly. Thankfully, you can use frozen peaches to make dessert recipes such as this one. If using frozen peaches, allow them to defrost in the fridge and drain any excess liquid prior to baking.

If your fresh peaches are still hard, place them in a brown paper bag and leave them on the counter for a day. Tossing a banana into the bag will speed up the ripening process even more!

Why is my peach crisp soggy?

An important step in cooking peach crisp is letting it cool after it comes out of the oven. Cooling allows the crisp to solidify slightly, gelling together. Your peach crisp should sit for at least 15 minutes after cooking to prevent it from being soggy when you slice into it.

If your leftover peach crisp is soggy, then the culprit is once again not letting it cool enough. Before sticking your crisp in the refrigerator, you need to make sure it’s fully cooled. 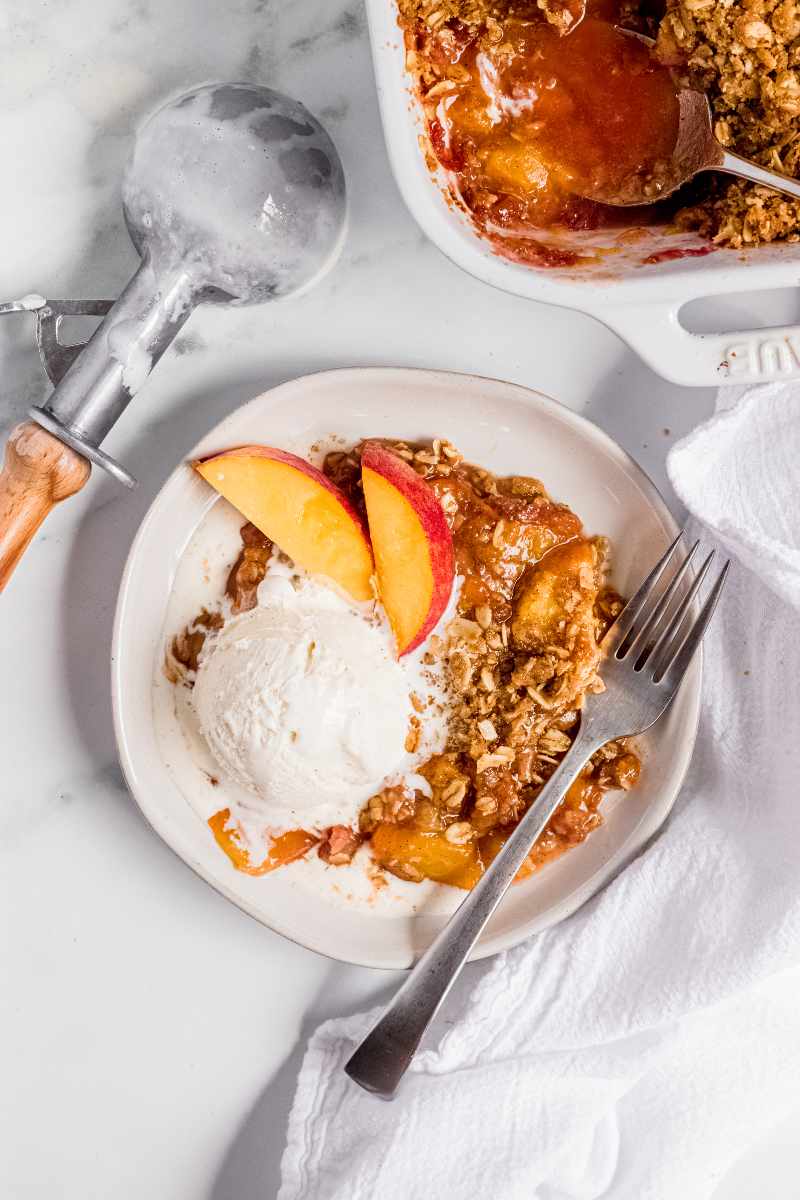 Should you refrigerate peach crisp?

If your family is like mine, there’s no need to stick your peach crisp in the fridge! Peach crisp will last for up to two days on the counter as long as it’s covered in plastic wrap or stored in an airtight container. If you still have leftovers after two days, by all means, move them to the fridge. They’ll stay fresh for up to one week in an airtight container when refrigerated.

Can you freeze peach crisp?

Yes! This is a great dessert for making ahead and freezing. Allow your cooked peach crisp to cool completely at room temperature. Then, wrap it in several layers of plastic wrap before wrapping it in a layer of aluminum foil. You can keep your peach crisp in the freezer for up to two months.

For the crisp topping

Kaitlyn Bain is a professional health and wellness writer with a passion for helping her clients educate their readers on healthy lifestyles. She loves cooking, reading, and exploring the outdoors on hikes with her family in Northern Ontario.
More posts by Kaitlyn Bain