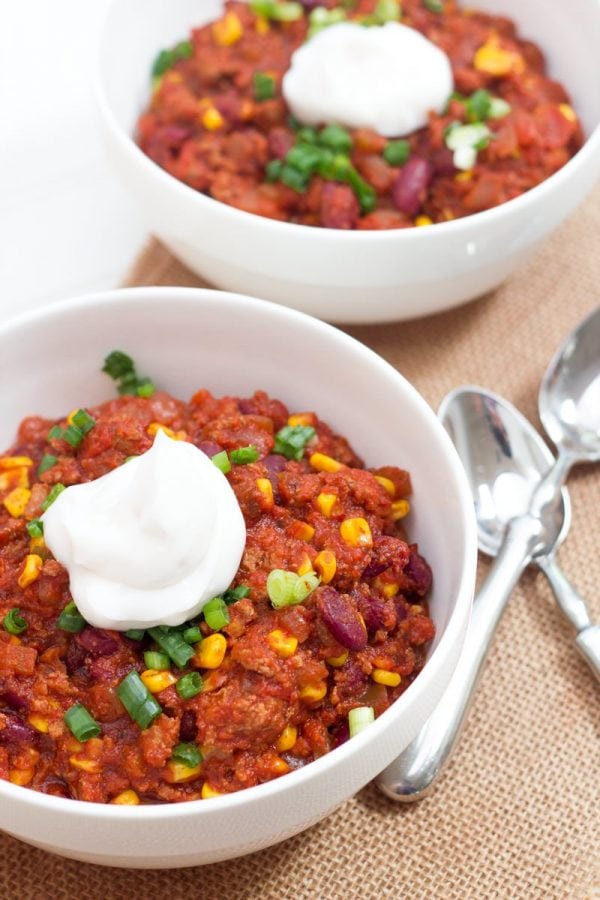 Recipe At-A-Glance
Gluten-Free, Slow Cooker1 hour
This thick and hearty Taco Chili is surprisingly light thanks to a base of lean ground turkey. It’s a definite crowd-pleaser!
Jump Directly to Recipe 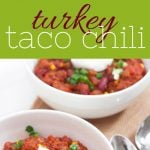 I know that chili is a pretty personal dish. In some regions, it’s sacrilege to put beans in your chili. Other people like chili so hot it makes your eyes water. I personally love thick and hearty chili, but I know some folks like chili thinner like soup. It’s hard to land on a chili that everyone loves, but let me tell you, I’ve got one. Meet taco chili. 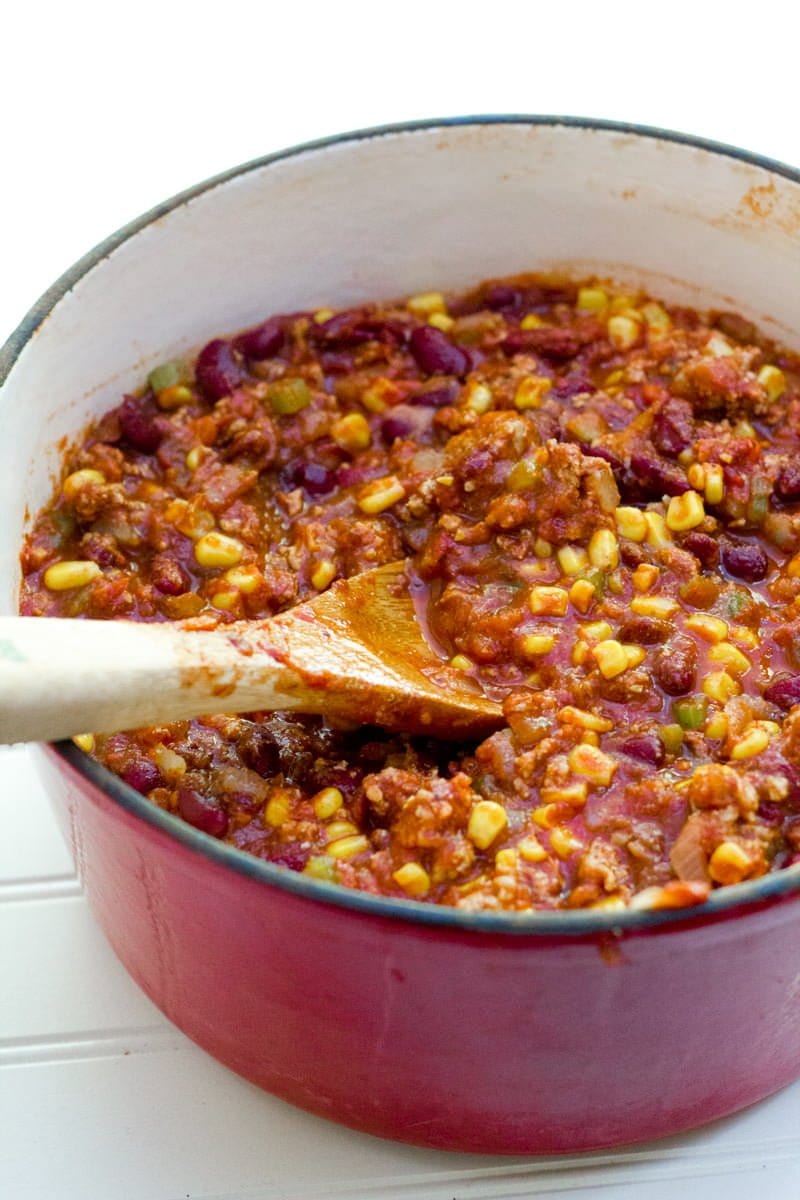 I’ve never met someone who didn’t like this taco chili. It’s a recipe that’s been in my family for years, and has been served to hundreds of people and met with hundreds of rave reviews—including from the girls on my dorm floor during my freshman year in college. Whenever I’d come back from a weekend visit home, Mama would send me with a big pot of taco chili, a bag of tortilla chips, and a tub of sour cream. We’d line up the chili, chips, and cream on the floor of my dorm room and invite all of our floormates over to snack on homemade chili and gossip about the boys’ floor. 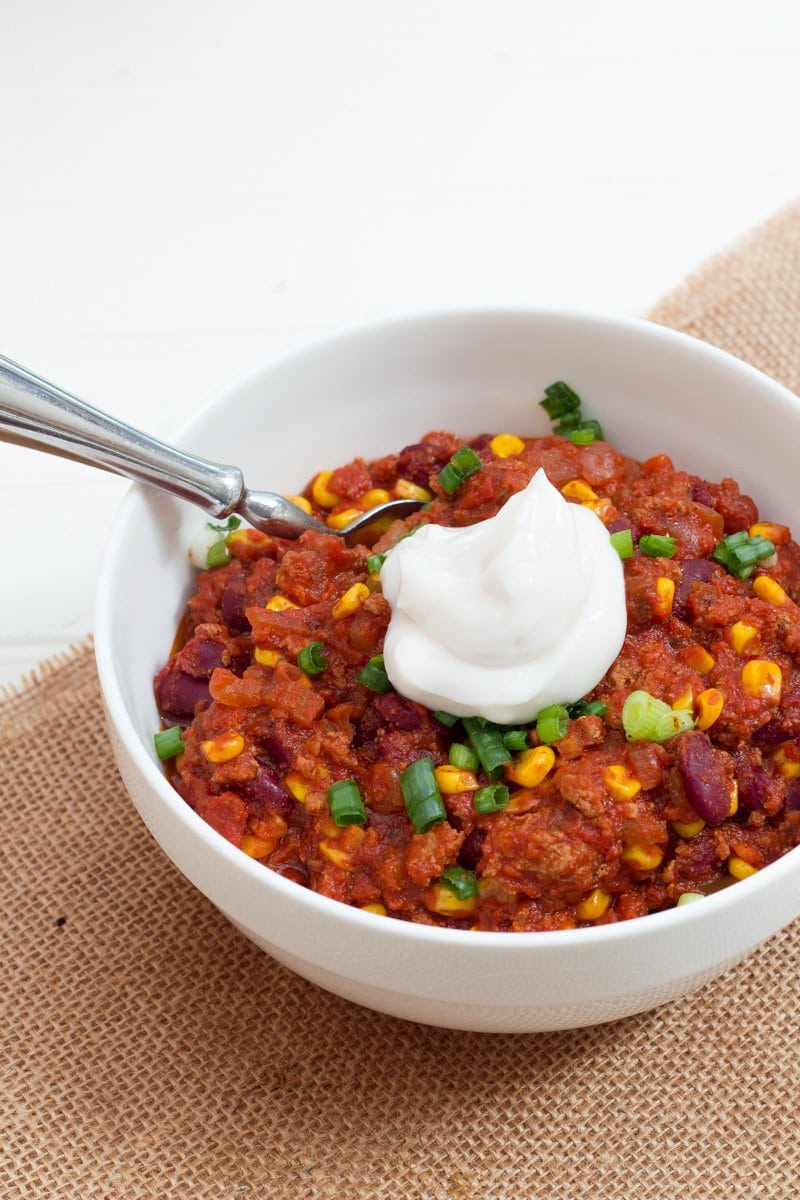 It’s also incredibly easy to make. The “taco” part of this chili comes from its super easy flavor ingredient—taco seasoning! Yup, instead of pulling out 300 different spices from your cubbard, the majority of the flavor of this dish comes from a packet of taco seasoning. Easy peasy! Of course, you can also make your own taco seasoning and get the same awesome flavor, plus have the ability to customize the flavor to your family’s liking. 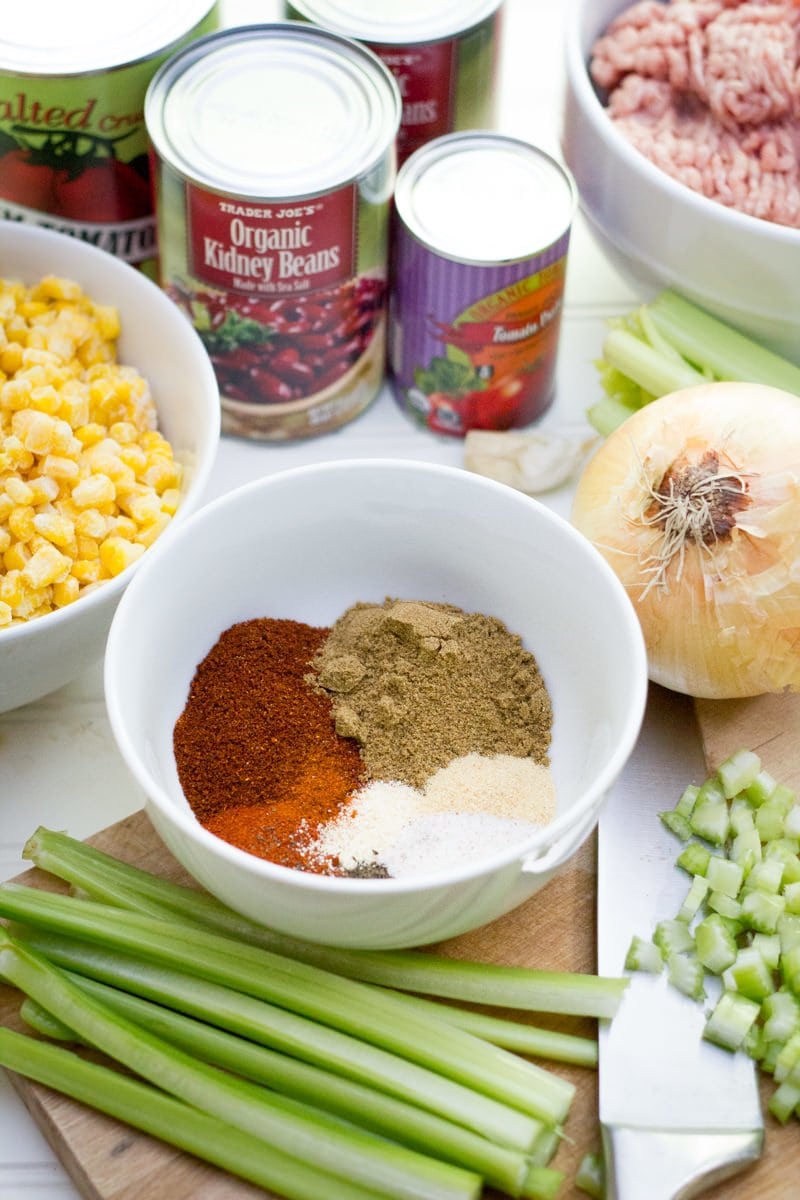 The original version of this recipe calls for two whole pounds of ground beef, and while it’s totally delicious when made that way, it’s also incredibly heavy and calorie-dense. I instead tend to switch out the ground beef for leaner turkey – you still get lots of awesome flavor in a much lighter dish. My recommendation is to go for a ground turkey with a little bit of fat. Skip the 99% fat-free stuff—it’s also 99% flavor free!

Worth noting, I’ve also made this chili in the slow cooker no less than a billion times, and it turns out just as well as it does on the stove top. I don’t brown or pre-cook anything. Just toss it all in and put in on low for 6-8 hours or high for 4-6—making sure you stir it a few times during cooking to break up the ground turkey.

It also freezes really well! Let it cool then freeze it flat in gallon freezer bags. When you’re ready to eat, either warm it up on the stove, or plop the chili popsicle in the slow cooker and let it warm up slowly while you do other things. 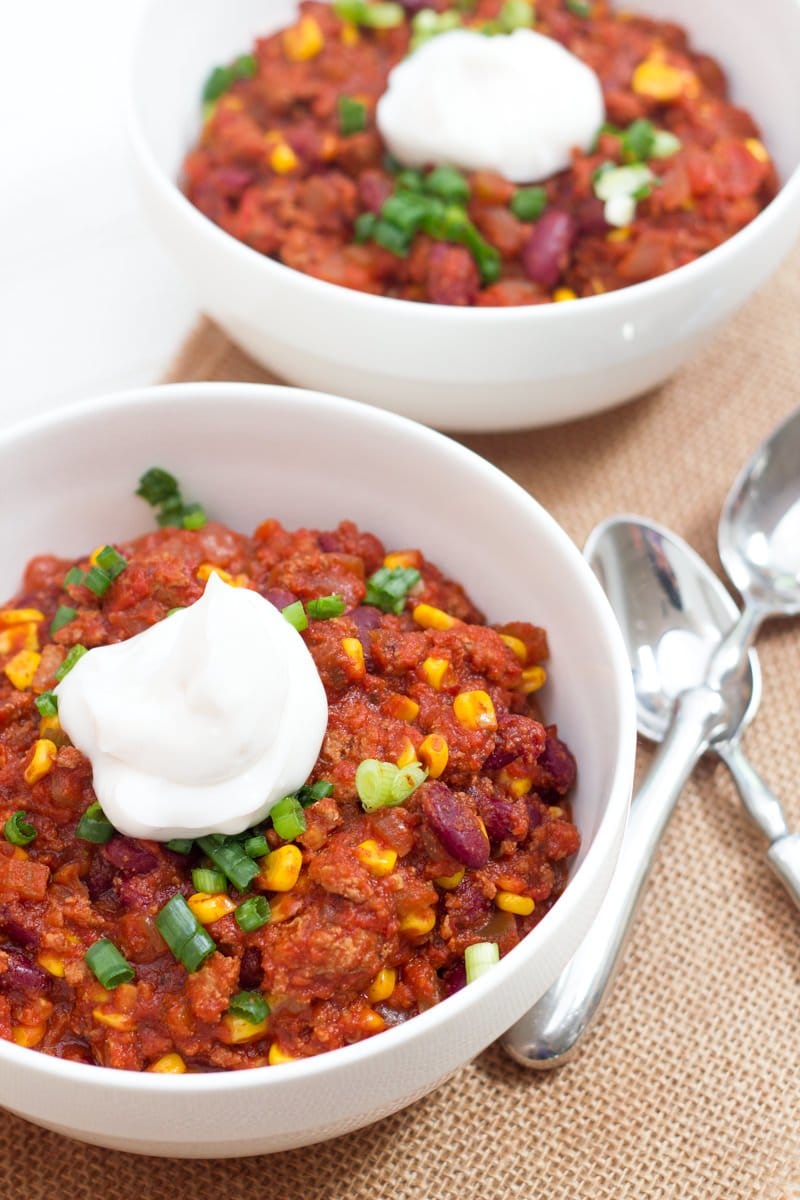 If you really want to please a crowd, make up a batch of this stuff, and then set up a chili bar for everyone to customize their own bowl. I like to put out bowls of diced green onions, minced cilantro, chopped avocado, sour cream, cheddar cheese, tortilla chips, elbow macaroni, sliced olives, and saltines, and let people go to town! It’s a great way to feed a crowd in the fall and winter, and it’s really easy on the host because you can make the chili and chop all the toppings ahead of time. Just bring it all out, set out some bowls and spoons, and wait for the compliments to come in.