Meal Plans →
Recipe At-A-Glance
...
Gluten-Free20 minutes
Shrimp and grits is one of my favorite comfort foods at the end of a long day. Dinner in less than 20 minutes? Sign me up!
Jump Directly to Recipe 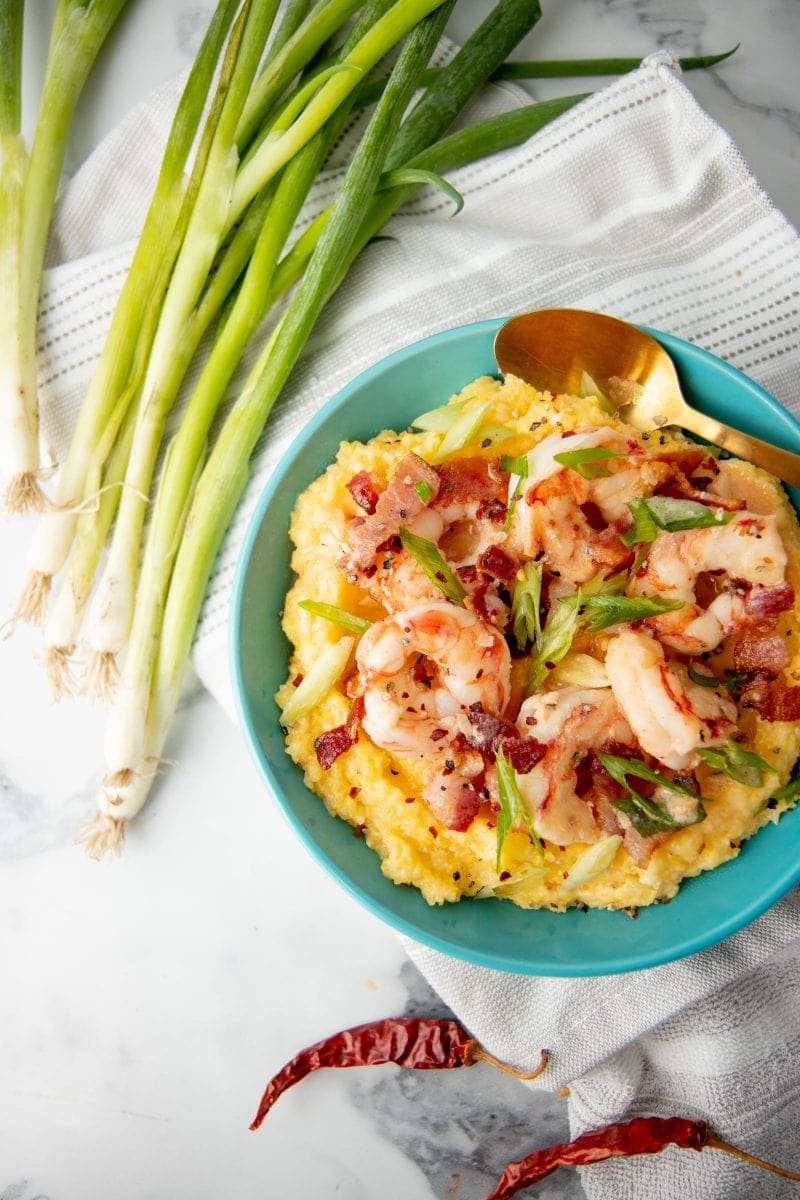 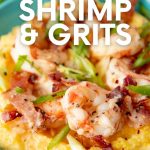 Shrimp and grits (or more commonly “shrimp ‘n’ grits”) is a Southern food cornerstone, and it was a staple on my Southern Midwestern dinner table growing up. Cheesy, stone-ground grits are topped with some plump shrimp sautéed in a lemon-garlic pan sauce. It’s topped with crispy bacon, bright green onions, and a sprinkle of cayenne pepper for kick.

My favorite part of this dish is that it is perfect for the nights when I’m riding solo. It comes together in 15 minutes and makes a perfect single serving. Of course, just double, triple, or quadruple the ingredients for two or more servings. 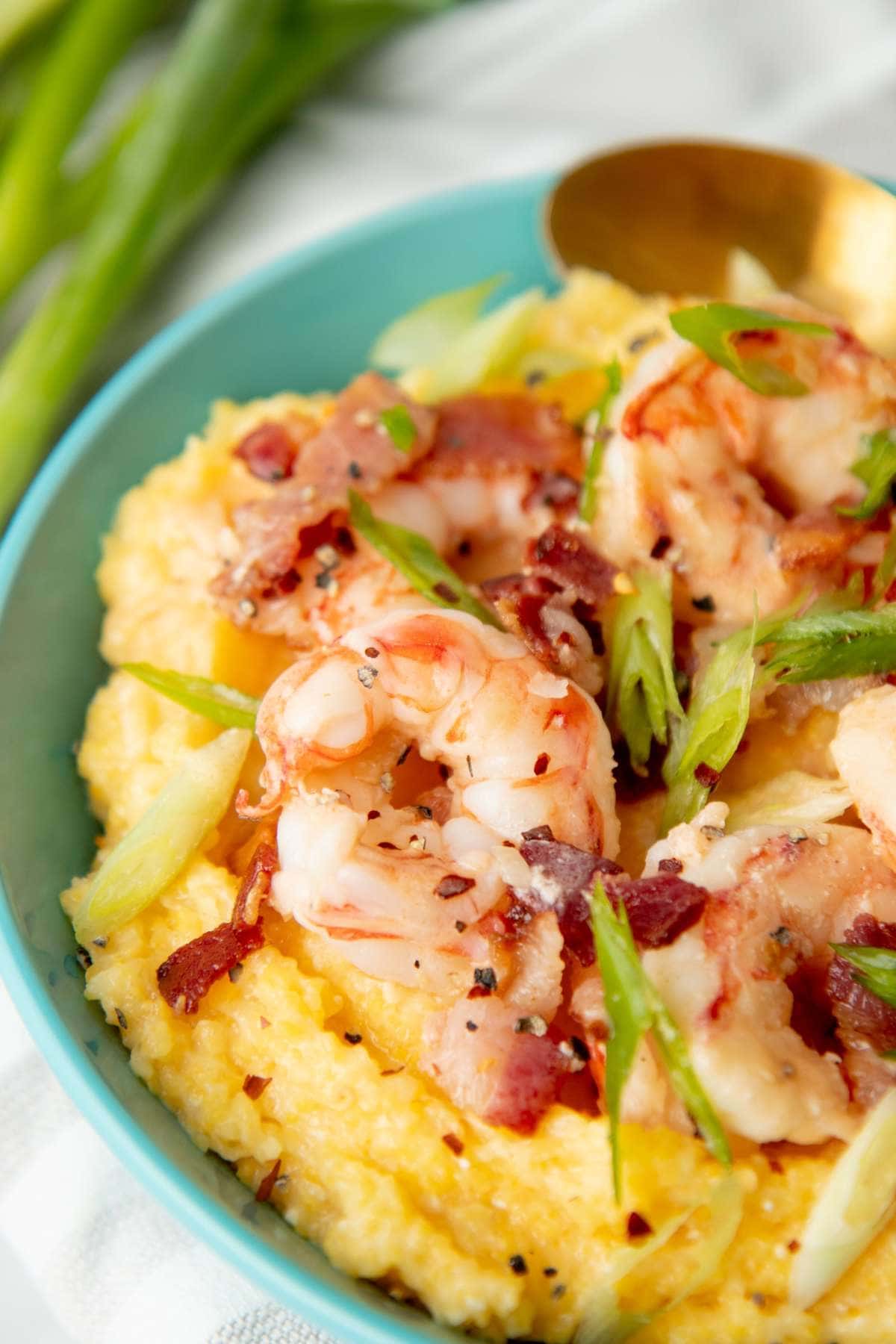 Okay, um, what are grits?

If you’ve never heard of grits, I won’t hold it against you—it’s definitely a regionalism! Grits are basically a cornmeal porridge. Here’s what you need to know about them:

Stone-ground grits tend to be my favorite for the best flavor and texture. They’re relatively bland on their own, but the butter, cream, cheese, or gravy they’re cooked with adds some serious flavor. 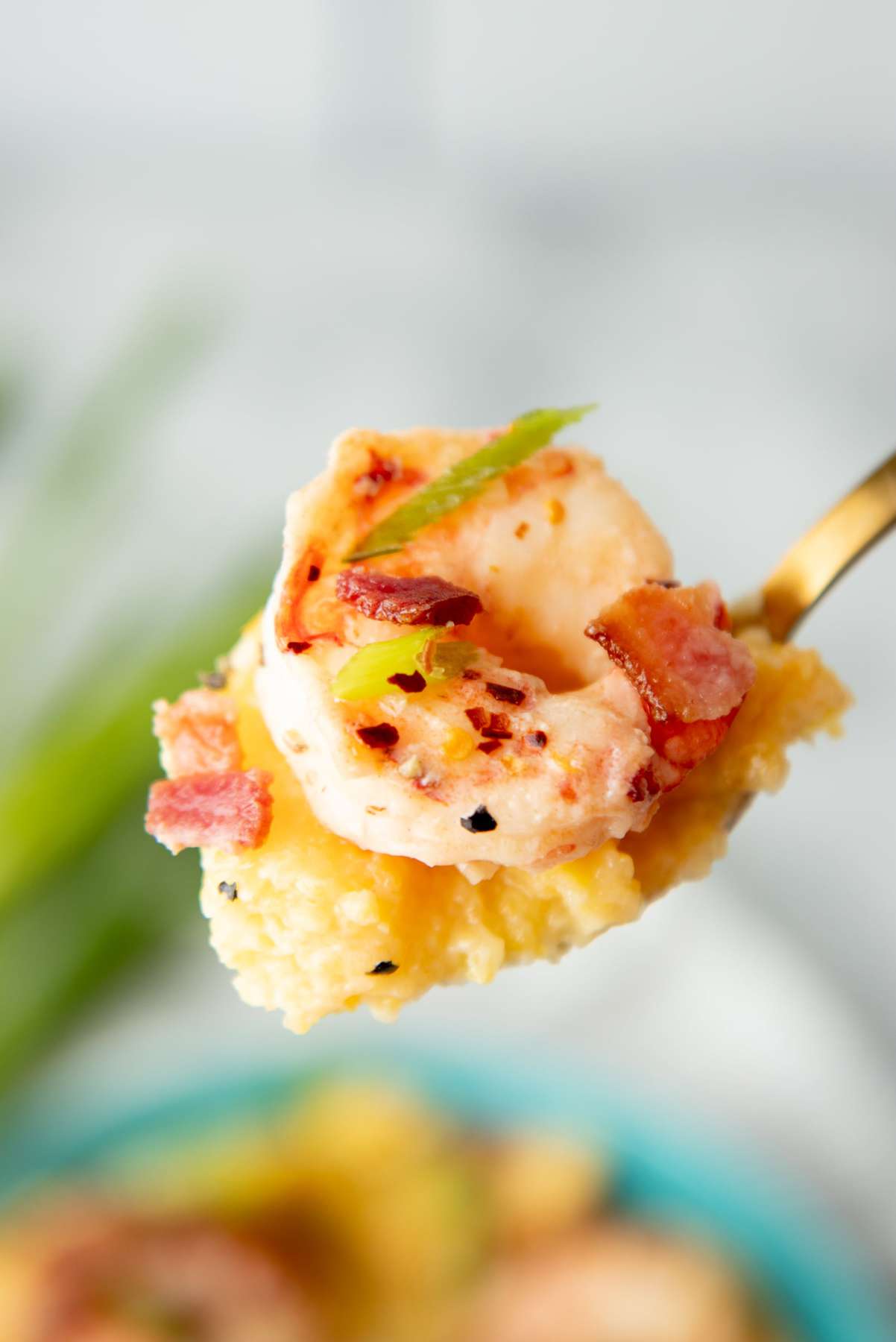 What’s the difference between grits, cornmeal, and polenta?

Grits, cornmeal, and polenta are all ground-up corn—which makes them pretty darn similar. The main difference is the grind size and in some cases, the type of corn used. In a lot of ways (but not all!), they can be used interchangeably. Here’s the info on each:

To make things even more confusing, you can also cook and the cool grits/polenta into slabs to turn into foods with even more names! For example, slabs of grits that are then sliced and fried are called “Mush” (and they are delicious served with butter and maple syrup like pancakes—YUM). 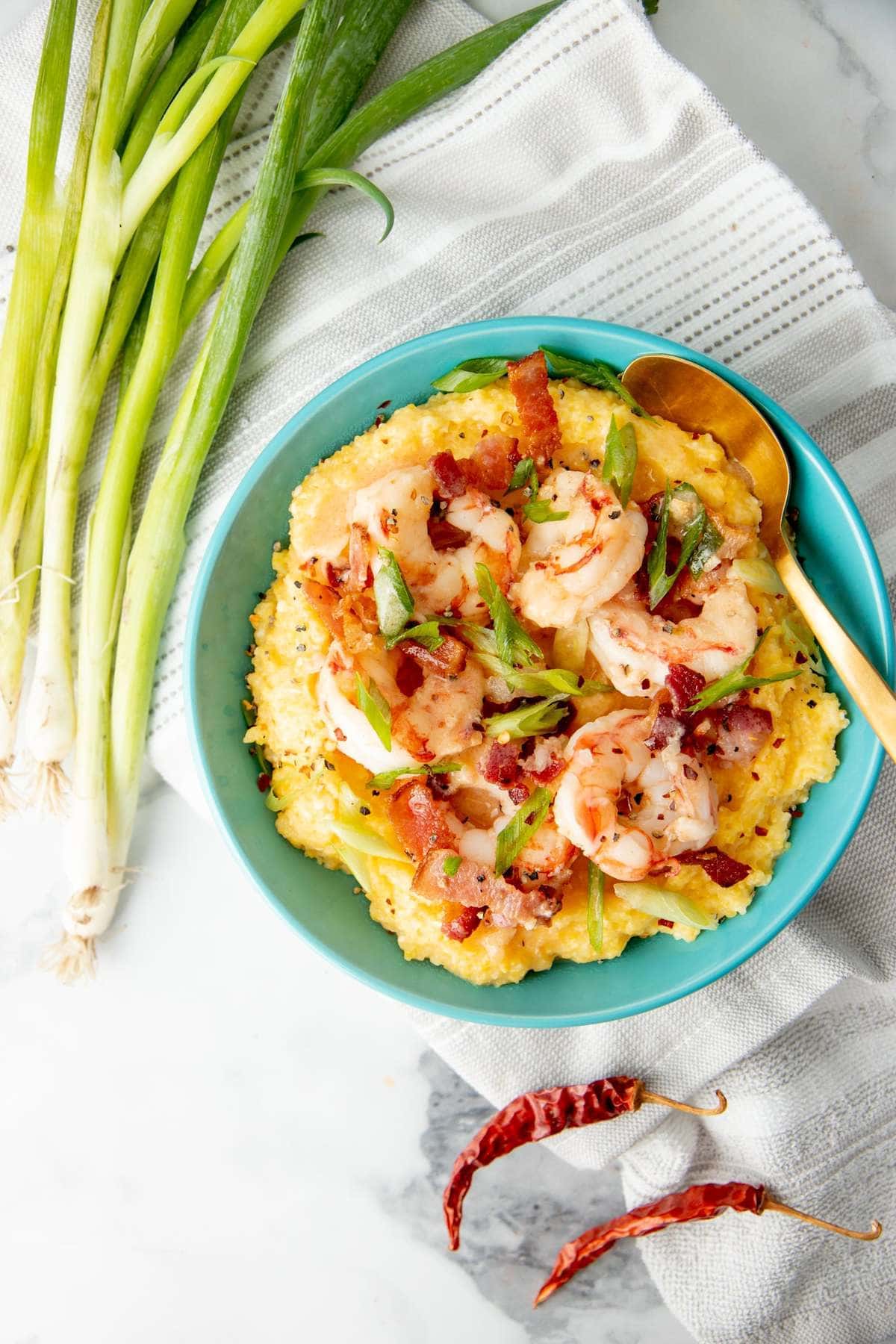 Where did shrimp and grits originate?

Many folks might think Shrimp and Grits originated in American South (where they were originally called “breakfast grits”), but as with many dishes in American food culture, shrimp and grits has its origins in Indigenous and enslaved peoples.

Food historians don’t agree on the exact origin story for shrimp and grits, but most agree that it’s a combination of colonizer adaptations of traditional Indigenous foods—like the Muscogee people’s corn preparation methods—and variations on traditional dishes from enslaved Africans—like traditional corn porridge and shellfish dishes served in Mozambique.

If you’re interested in the origins of this dish (and you should be—know the history of your food!), I highly recommend checking out a few of these resources on the history of shrimp and grits: 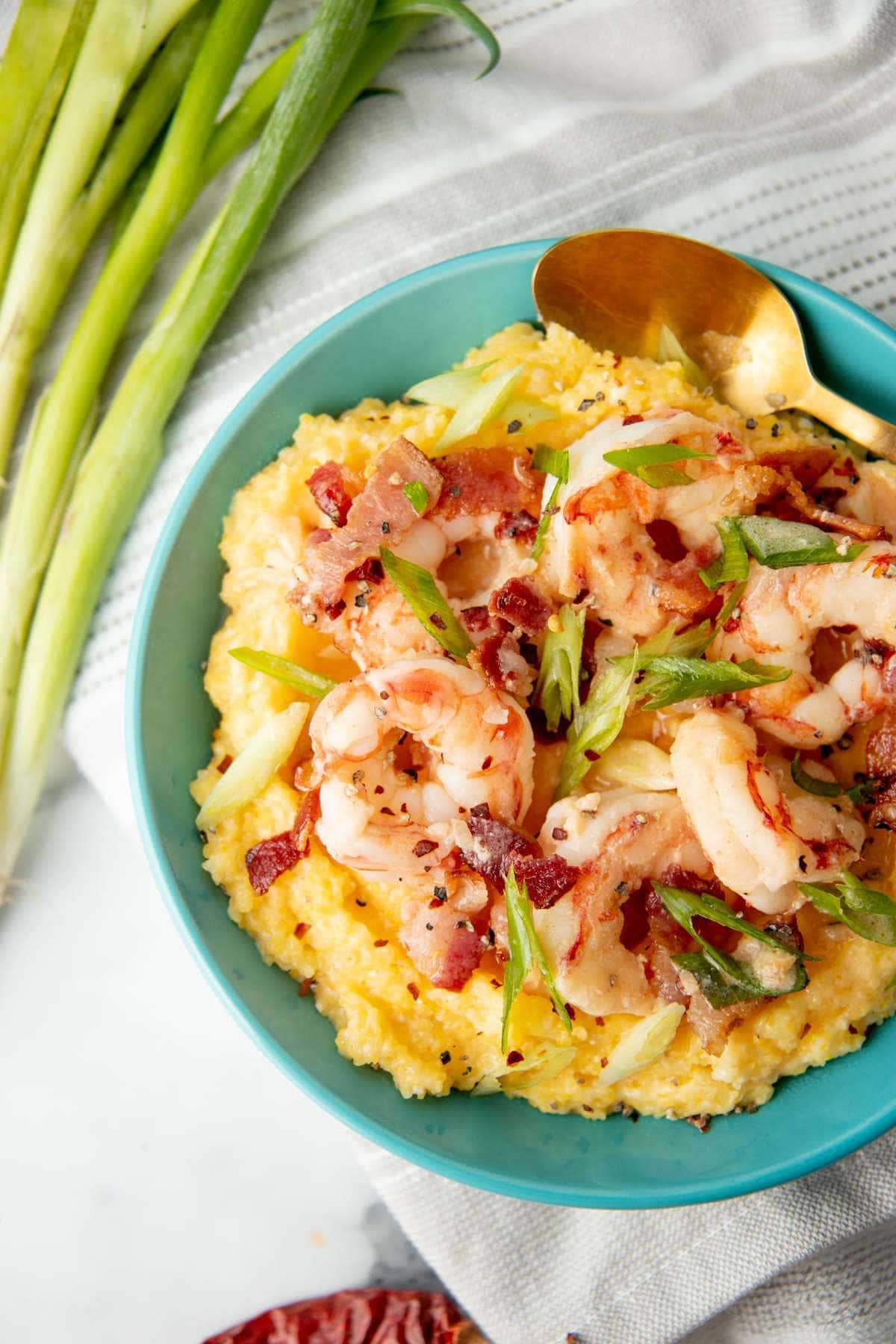 What do I need for this shrimp and grits recipe?

Yep! Since they are made from ground corn, grits are naturally gluten-free, as is this entire recipe.

Where are stone-ground grits in the grocery store?

If you’re hunting for stone-ground grits, you should start your search in the aisle that has breakfast foods. It’s often found with oatmeal and prepared pancake mixes. If it’s not there, you could try the gluten-free aisle, and if you still haven’t located it, try the baking aisle. Some stores don’t know what to do with them, so they put them there. 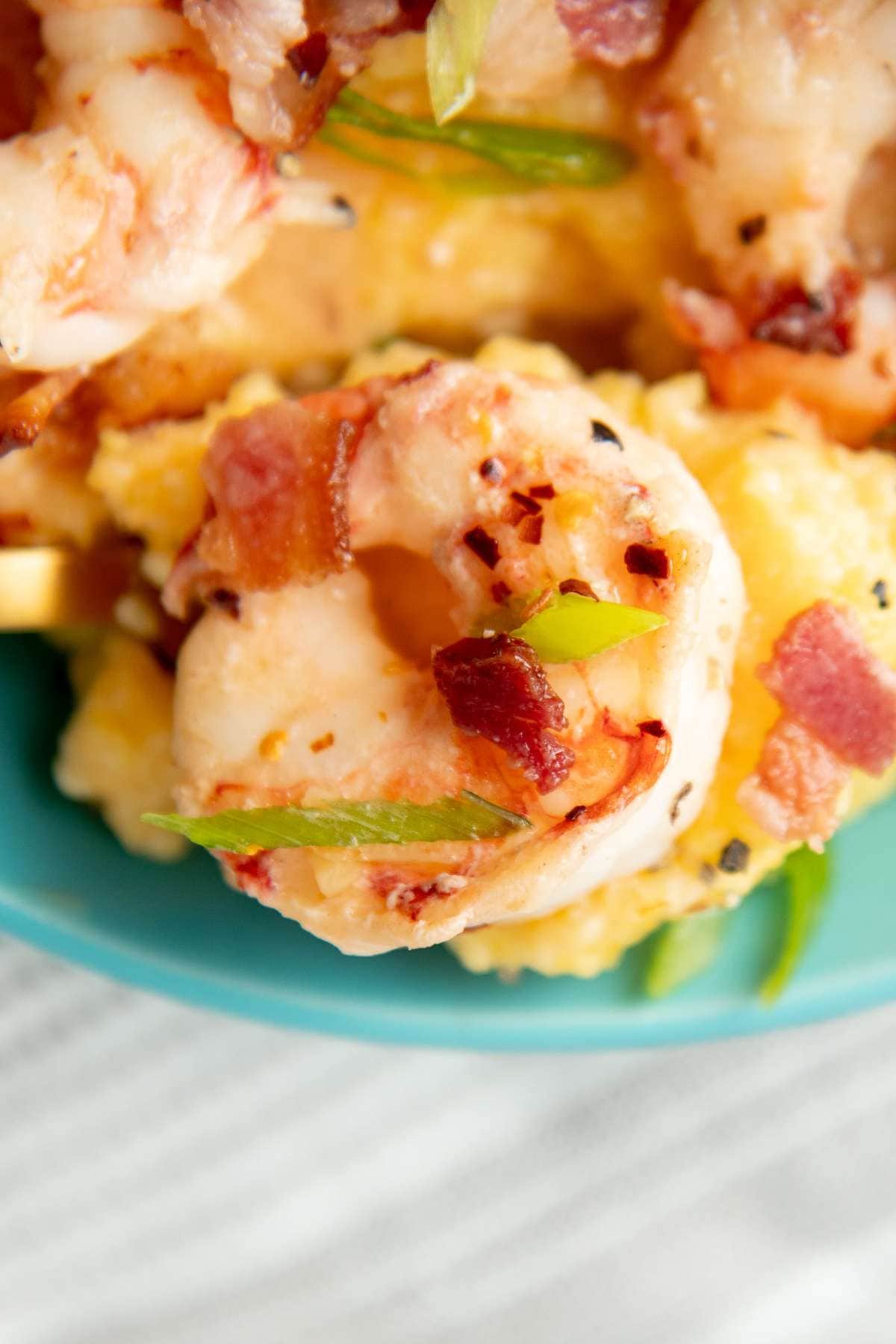 If you are way up north, you might not be able to find anything labeled grits anywhere. If so, look for coarsely ground cornmeal or polenta. If you’re planning ahead, you can get them through online retailers like Amazon. Bob’s Red Mill makes an excellent stone-ground batch of grits!

What kind of shrimp should I use?

Any raw shrimp will work in this recipe, including frozen shrimp. To save time, look for deveined and shelled shrimp that have the tail removed for you. Medium and large shrimp give you the perfect meaty bite, so I’d recommend staying away from tiny shrimp. If you’re going to use frozen shrimp, you can pop them in a bowl of cold water to defrost for 15-20 minutes. 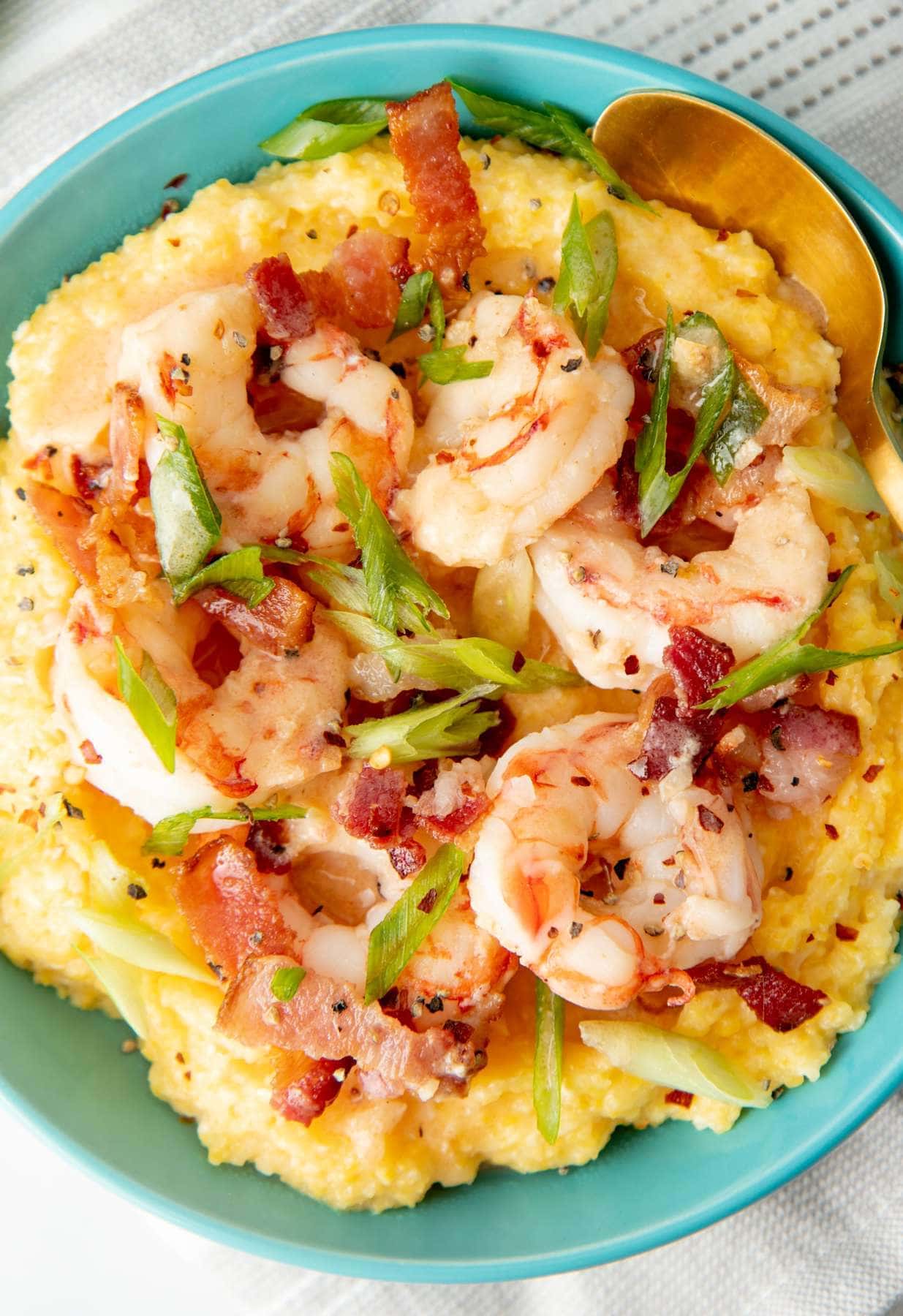 Can you make this shrimp and grits recipe paleo-friendly?

This recipe works best with grits, but if you’re allergic to corn or you prefer not to eat it, you can check out my Shrimp and Cauliflower Grits recipe. It uses cauliflower instead of grits, but you still get that creamy, warming comfort food feel. There are guidelines in the recipe to make it dairy-free, so it’s a super adaptable recipe!

Can this recipe be doubled?

Absolutely! This recipe was designed to make the perfect serving for one person; however, it’s too good not to share. You can double, triple, or even quadruple the recipe if you’re looking to feed the whole family. 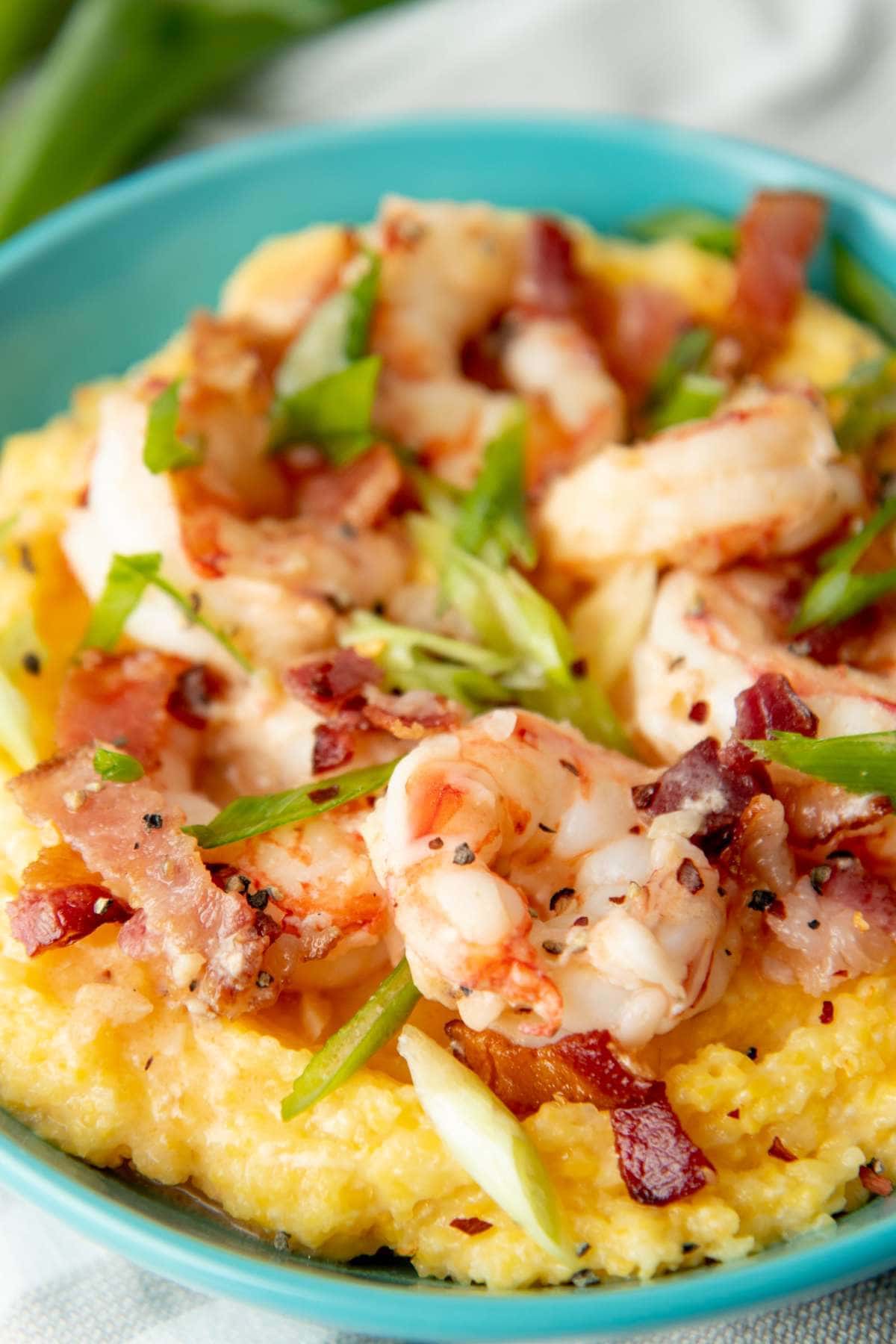 Can this shrimp and grits recipe be made ahead of time?

Shrimp and grits are at their tastiest right after they’ve been made. This is when they’re super creamy and delicious. This shrimp and grits recipe only takes 15 minutes to prepare. It should whip up quickly enough that you can benefit from the fresh, cheesy flavor, no matter how busy you are. You can make them ahead of time, but I wouldn’t suggest it—reheating the grits takes nearly as long as making them from scratch! 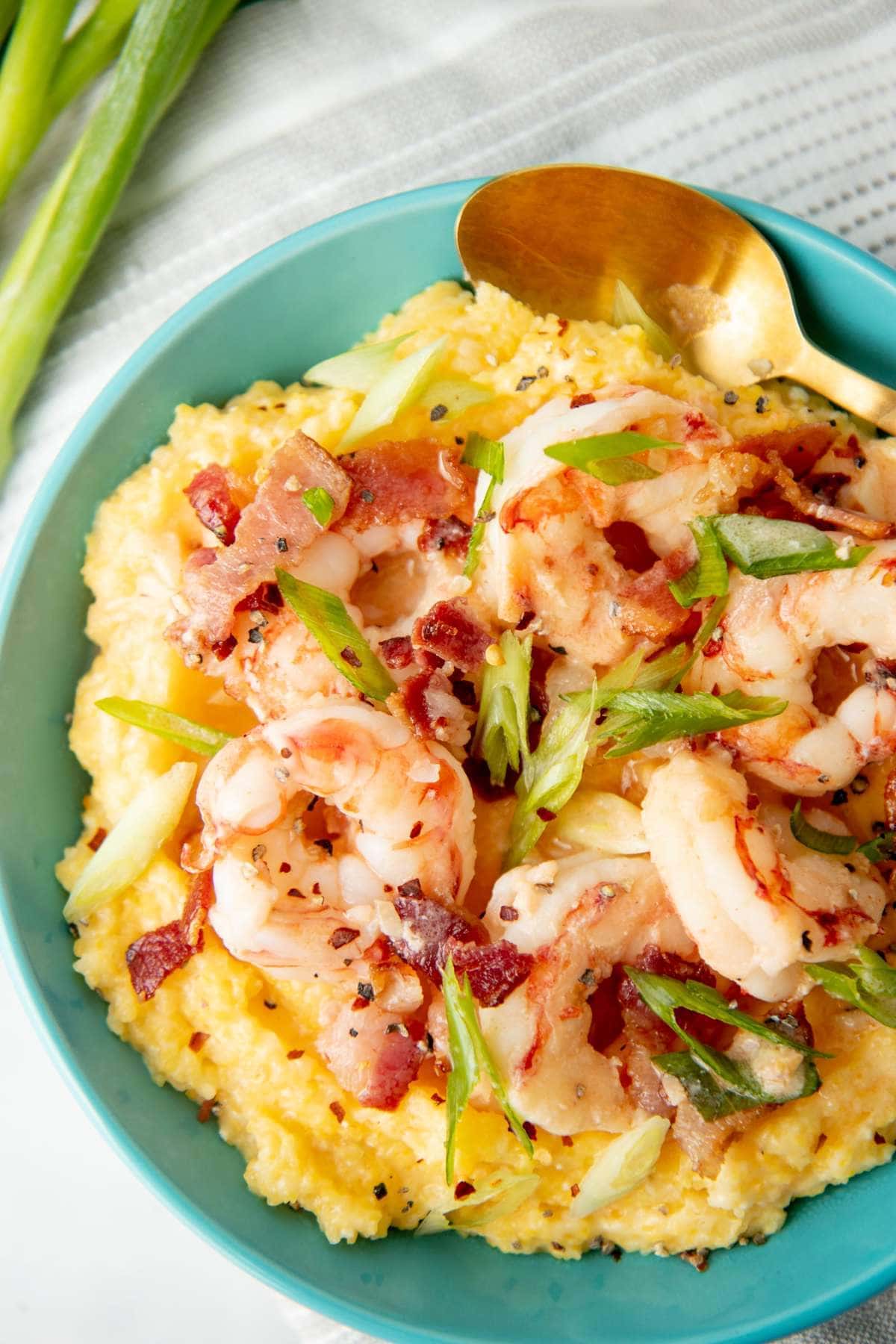 Can this shrimp and grits recipe be frozen?

Absolutely! If you happen to have leftovers, you can freeze the shrimp in one container and the grits separately for up to 2 months. The cheesier and creamier the shrimp and grits are, the better they freeze. It’s best to allow your grits to cool completely before freezing.

When it comes time to defrost, place the container in the fridge overnight. You can then pop them in the oven, covered, at 350°F until they’re warmed through.