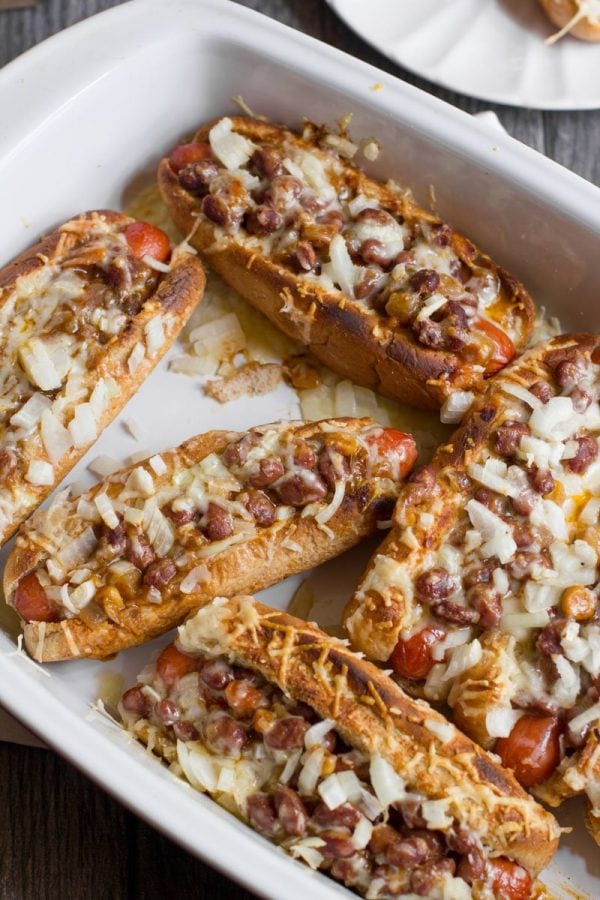 Recipe At-A-Glance
...
Quick & EasyReady in 20 min
Feed a crowd quickly and easily with these Oven Baked Chili Dogs. They get melty, gooey, crispy, and crazy delicious in the oven!
Jump Directly to Recipe

Let me introduce you to my favorite food on the planet: chili dogs. Okay, actually, my second favorite food, because: pizza. But I consider pizza in a category of its own. Everyone loves pizza. So, it isn’t really news that I love pizza. But chili dogs? That’s probably a bit of a surprise.

Did you think my favorite food would be a raw kale salad or salted caramel brownies or hand-formed whole wheat ravioli made with heirloom organic butternut squash harvested from our own garden? Yeah, not so much. I mean, those sound quite yummy, but those don’t even come close to the perfect food that is a really good chili dog. Hello, lover.

Now, you all know that I try to eat as healthfully as possible, and as much as I would like to be one of those people who says stuff like, “Oh my gosh, I love salad, it is the best! I could eat it all day every day!” I am so not. Not even a little. And I’m sure you’ve picked up on that based on the fact that my salad and smoothie recipes are interspersed with cookies and cakes.

I like vegetables. I love how they make me feel. I love preparing them in yummy ways. I love growing them. Veggies are great. But if the world is ending tomorrow, I’d skip the broccoli and request a big plate of baked chili dogs for my last supper. Preferably with a giant root beer in a big frosty mug. And my Mama’s chocolate chip cookies for dessert.

That’s what I think is my absolute favorite thing about a truly healthy diet—there is plenty of room in it for your favorite foods, even if they aren’t the healthiest. Day after day of healthy food choices aren’t going to be erased by a chili dog (or two) every now and again. And in fact, allowing yourself the freedom to eat those unhealthier foods occasionally is probably what makes it easier to choose healthier foods day-to-day. That’s why I think unhealthy foods are healthy, too!

It took me a shockingly long time to figure this all out. Years and years worth of starting and stopping new healthy diets and cleanses and eating plans. Years and years worth of feeling guilty when I would “mess up” and cave to eating something tempting. Years and years worth of a disordered relationship with food. Sometimes my balance still gets a little off (tipping a little more to the chili dog side and a little less to the kale salad side), but all it takes is a gentle correction to fix it. No guilt. No feeling like a failure. Life became much happier when I gave myself some room in my diet to eat the foods that I enjoyed without guilt—regardless of their nutritional value. 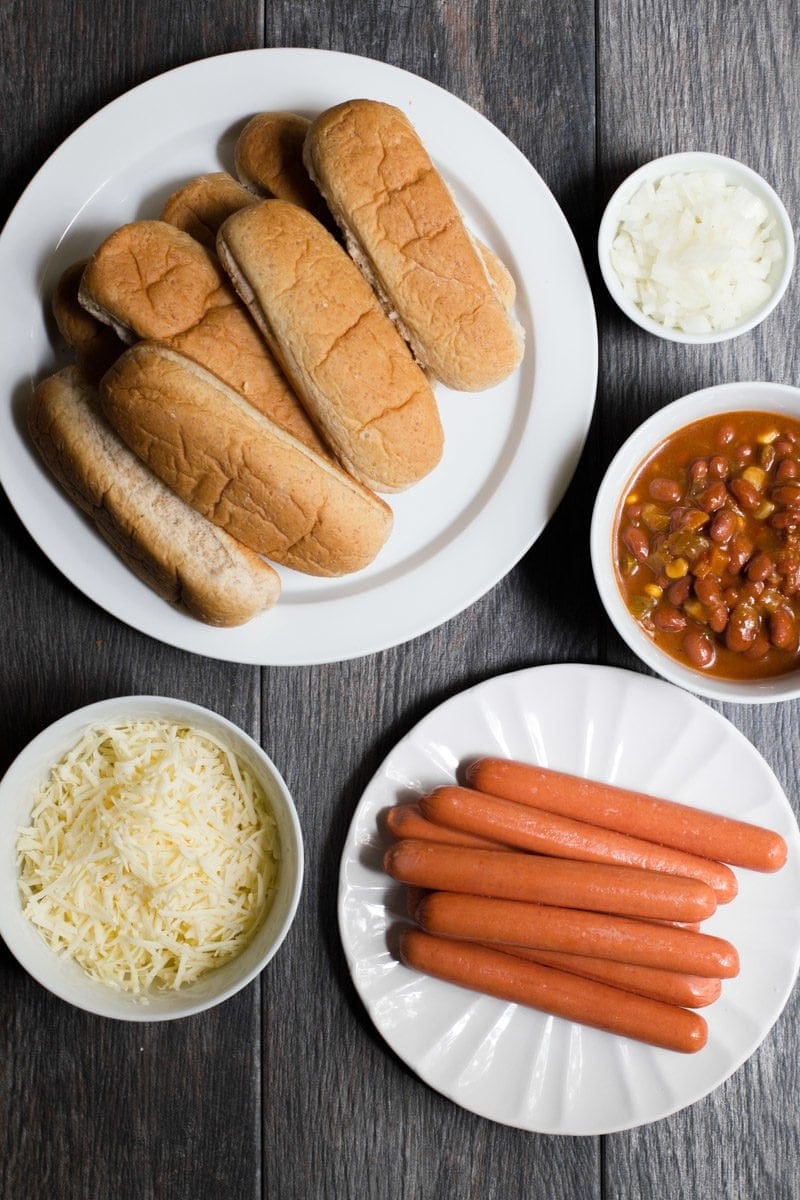 Of course, when you’re cooking not-so-healthy foods, there are always ways to make them healthier. I’m not talking about putting asparagus in your hot dog buns (although, try it), but I am talking about choosing cleaner ingredients. Like for these chili dogs, I chose organic, all-beef hotdogs, whole wheat buns, and organic canned chili.

I think perfection is so often the enemy of good. Especially when it comes to eating. If you have the resources available to make food from scratch from organic, local ingredients all the time—awesome! But if you don’t, do what you can when you can—that’s equally awesome. Any step forward is an important step. Even if it’s something as simple as finding a hot dog brand that is better for your family than what you normally buy (I like Applegate Farms, FYI). Simple choices like better hot dogs add up to a healthier life. And that’s what we’re all trying to live, right?

Alright, enough Deep Thoughts with Cass, let’s talk about these particular chili dogs. I know you’re probably questioning why anyone would ever need to bake chili dogs. I mean, it doesn’t get much simpler than slapping a hot dog on a bun with some chili on top. True. Chili dogs inherently are pretty easy peasy, but let me tell you when Oven Baked Chili Dogs are SO MUCH EASIER AND BETTER.

(A) Easier to feed a crowd. You can load up as many pans of these suckers as you think your party-goers will eat. The oven makes it a breeze to get hot, tasty chili dogs out at once for everyone. These baked chili dogs are made for your game day party.

(C) And the most important thing: THEY TASTE SO MUCH BETTER. In my opinion, baking chili dogs is the only way to make them. The inside gets a little gooey and warm (good gooey, not like dunking-your-buns-in-water-to-win-a-hot-dog-eating-contest gooey). The cheese gets all melty and bubbly. And the edges of the buns get just a little bit crispy. It’s like a texture party in your mouth. It’s aca-amazing.

Now, a lot of your chili dog success hinges on your chili choice. If you have extra homemade chili leftover from a few nights back, awesome, use that up! If you have the time to make yourself a pot of chili just for chili dogs, grand!

But if you’re like me, and just want to go from zero to chili dog in as little time as possible, it’s canned chili for you. Don’t be scared. There are actually some pretty tasty canned chilis out there right now. I use Amy’s Organic, and while it won’t ever hold a candle to my homemade Turkey Taco Chili, it does the job just fine and dandy, and it allows me to satisfy my chili dog craving in less time than it takes to watch a Friends rerun. Since Amy’s is also vegan, you could also easily sub in your favorite veggie dogs here and make veggie chili dogs. YUM.

Okay, I’ve spent entirely too long talking about chili dogs instead of giving you the recipe for chili dogs (although admittedly, this isn’t much of a “recipe” just a method suggestion). I’ll shut up now and provide you with what you came here for. Enjoy (and without a single ounce of guilt, k?).