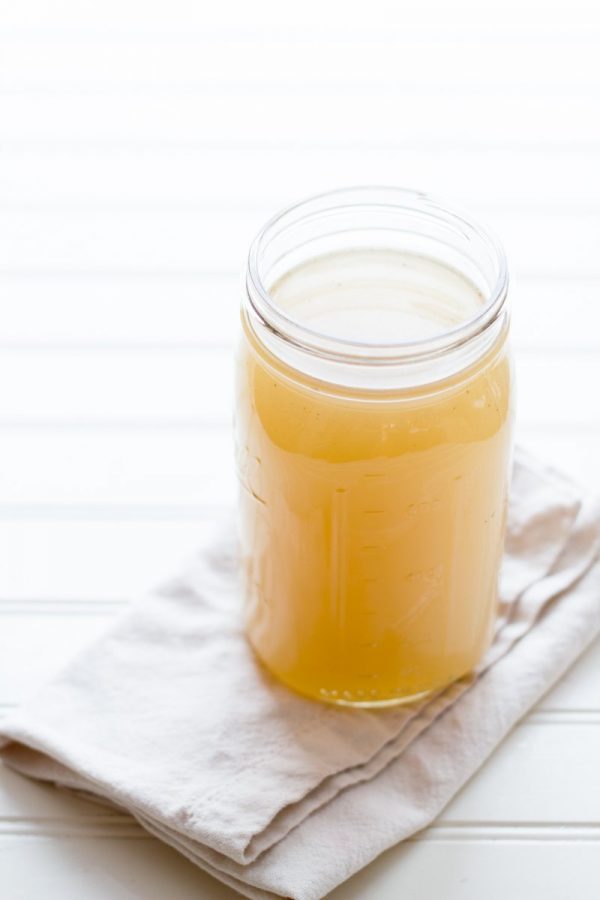 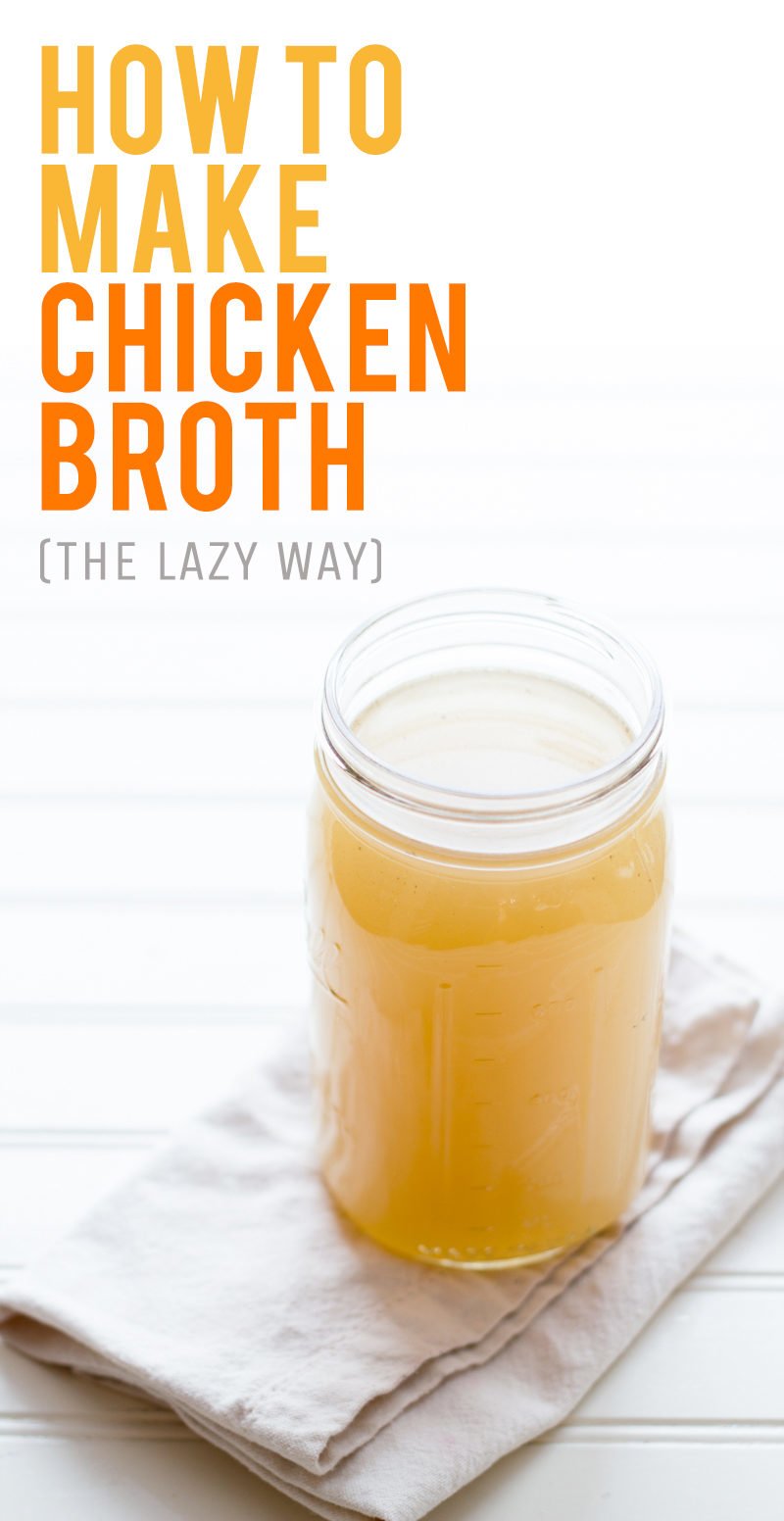 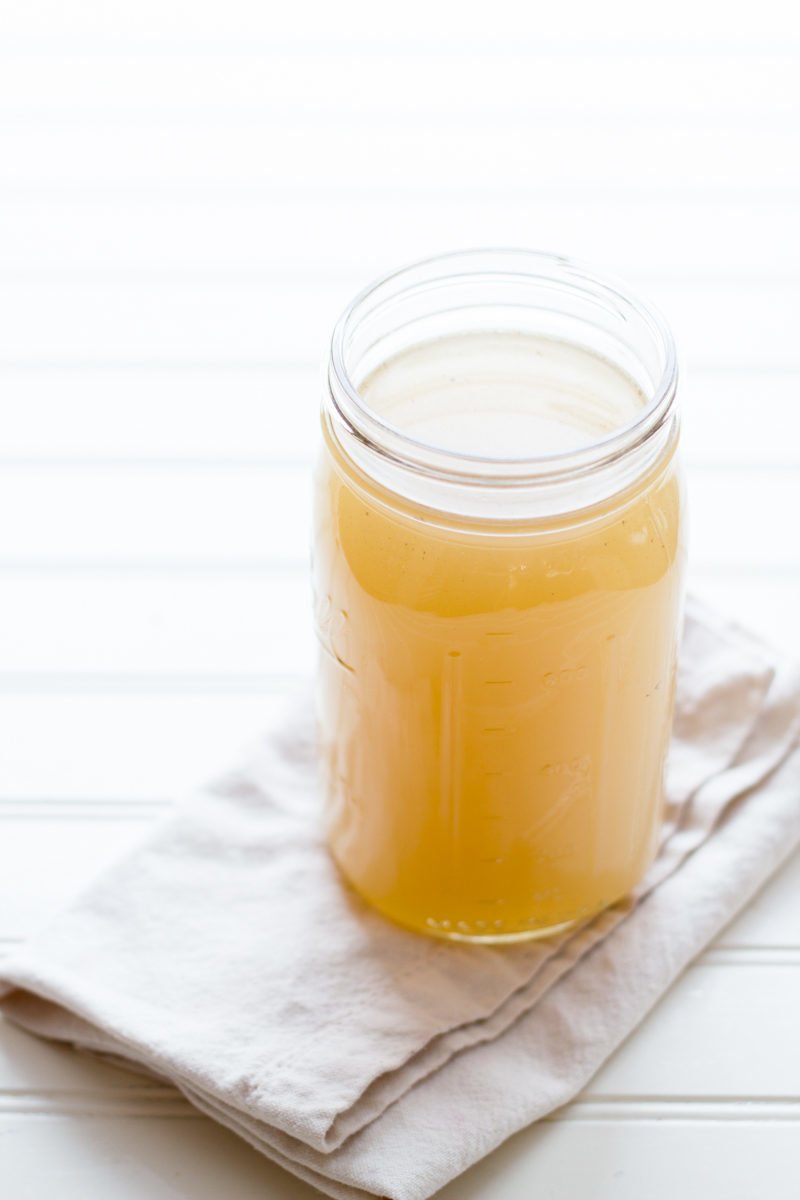 I’m going to let you in on a little secret: I haven’t bought chicken broth in years. I used to think making chicken broth was this big, long, complicated process, and that kept me from making my own forever, but then I discovered the really easy trick to super easy chicken broth, and I haven’t looked back. Homemade chicken broth is tastier, healthier (you can control the sodium levels), and, the main reason I make it, it’s so much cheaper! Especially with this method. It’s practically free! 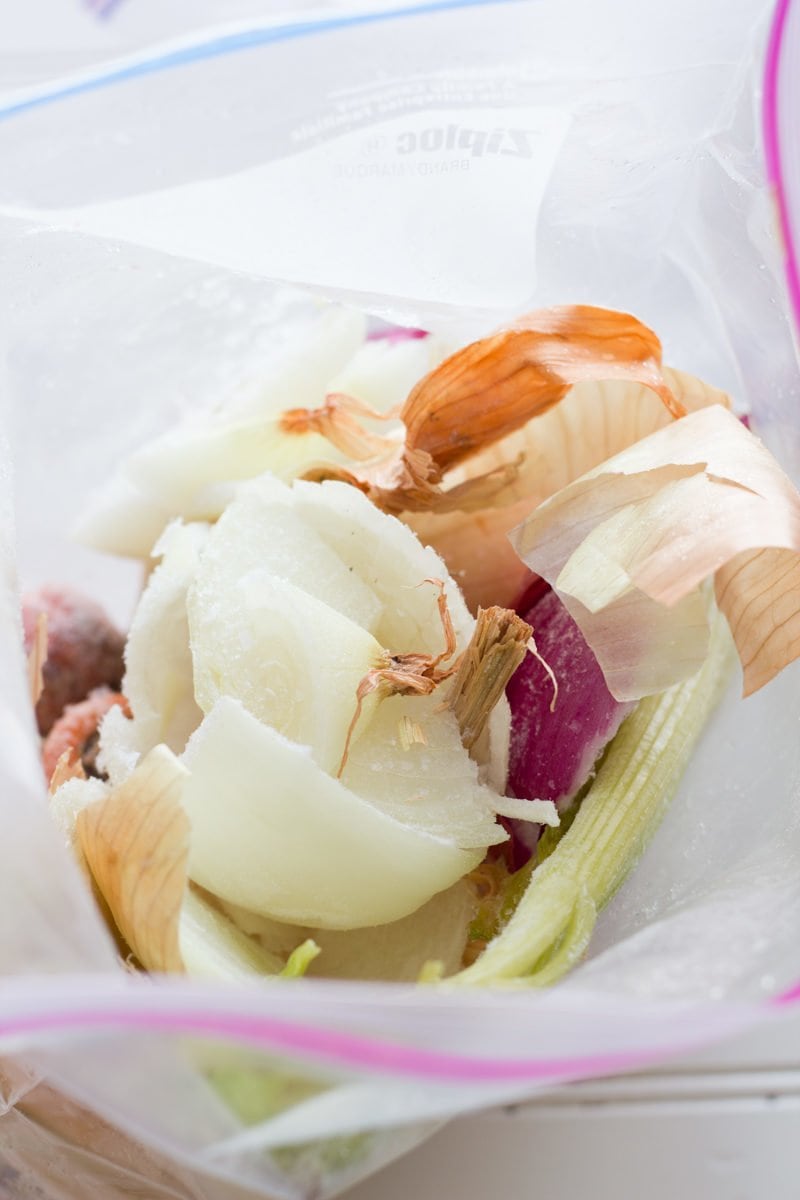 I keep two gallon-sized freezer zip-top bags in my freezer at all times. In one bag goes chicken scraps—leftover bones and skin from chicken breasts, trimmed fat scraps, carcasses leftover from whole roasted chicken. I ram it all in there and freeze it.

In the second bag goes all my veggie scraps—onion skins, carrot peels, celery leaves. I just fill it up as I’m cooking throughout the week. I don’t worry about ratios (too much onion or too little celery), I just fill it up with whatever I have leftover.

Then, once both bags are completely full, it’s time to make some chicken stock. 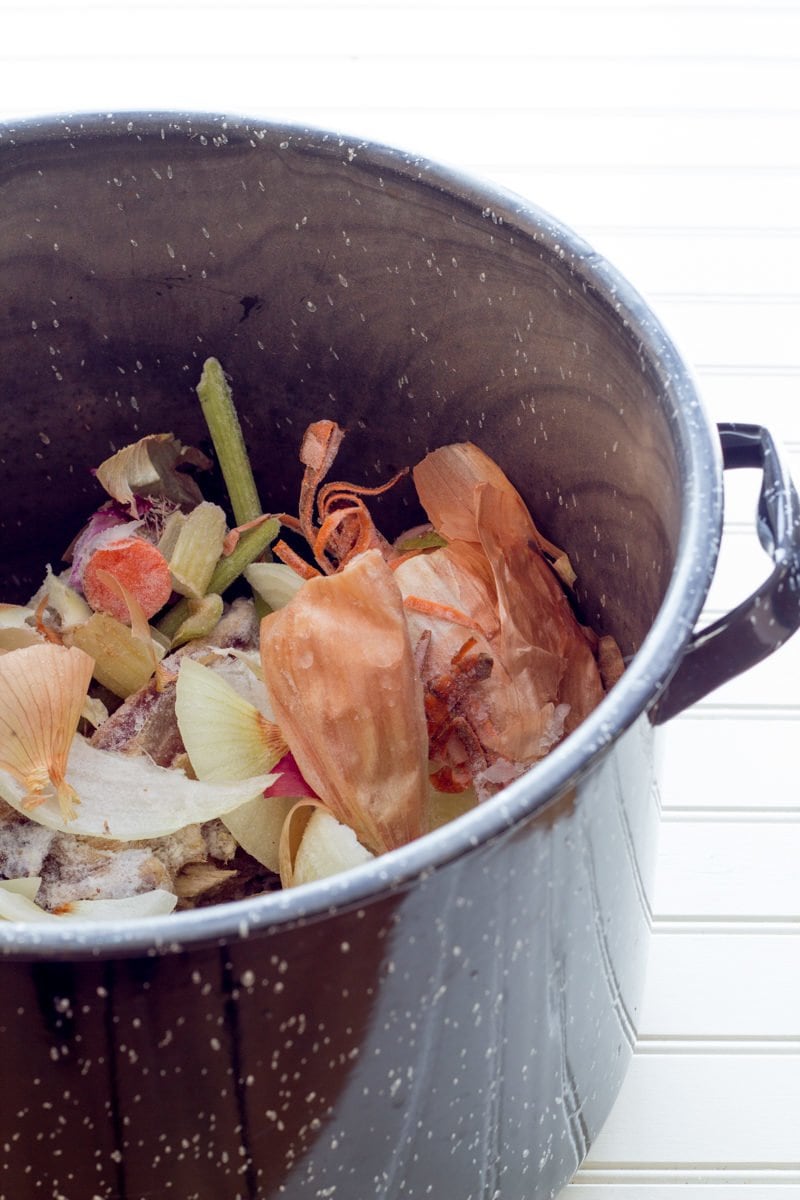 I dump both bags into a giant stock pot (I tend to use my 21 quart canning pot), throw in a couple of bay leaves and a few shakes of poultry seasoning, and then fill up the pot with water. I honestly don’t measure at all. See? Lazy. I also don’t salt my broth—I save that step for when I’m actually cooking with the broth down the road. 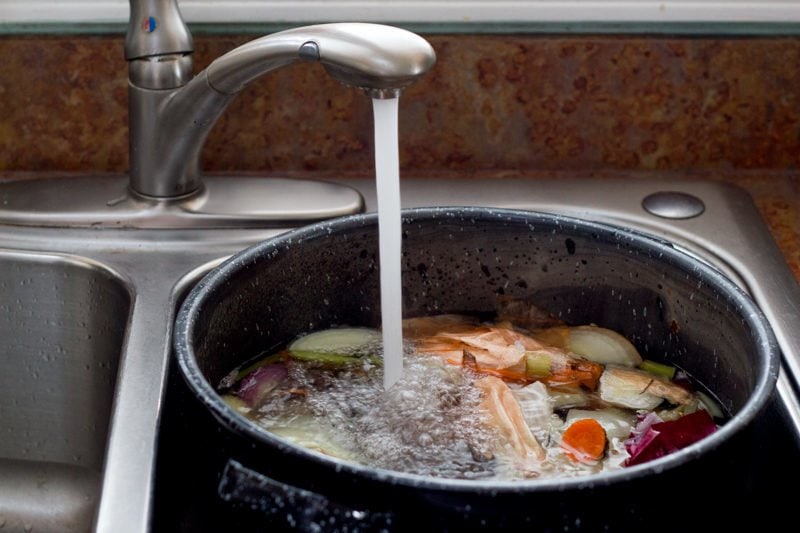 And then I pop it on the stove on high. 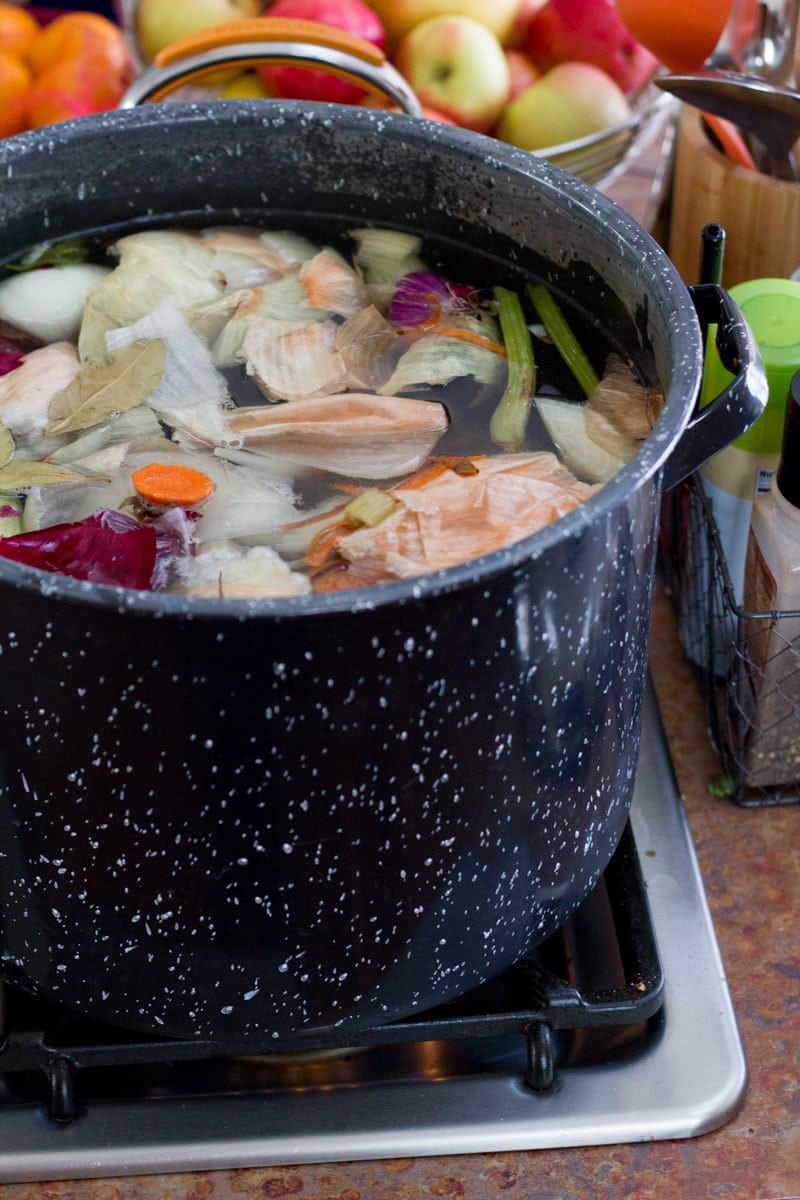 I bring it to a boil, reduce the heat, and simmer for a few hours, or until the broth looks like, well, how broth should look! It should look rich, dark, and super delicious. 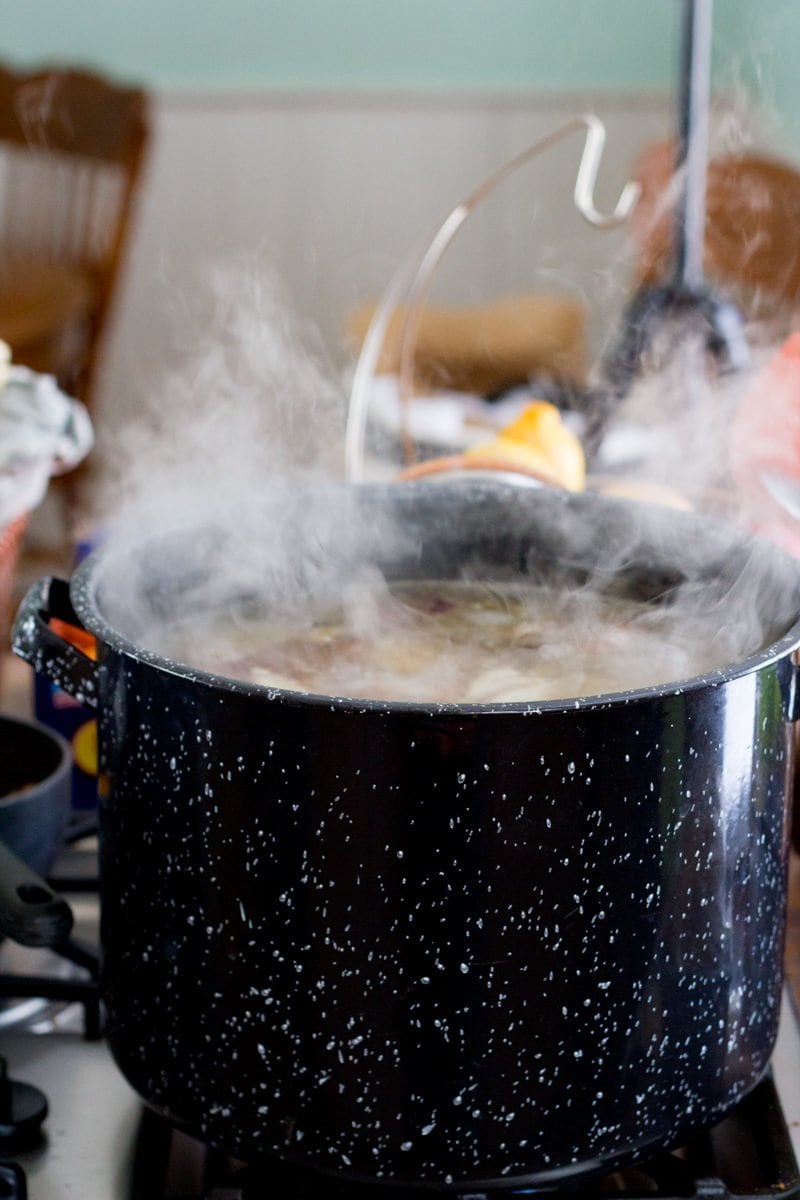 I know some folks strain off the fat, but I like to keep it in my broth (fat=flavor!), so my next step is to let the broth cool slightly, and then strain it. I usually strain it twice, once through a fine mesh sieve, and then again through my Greek yogurt strainer. 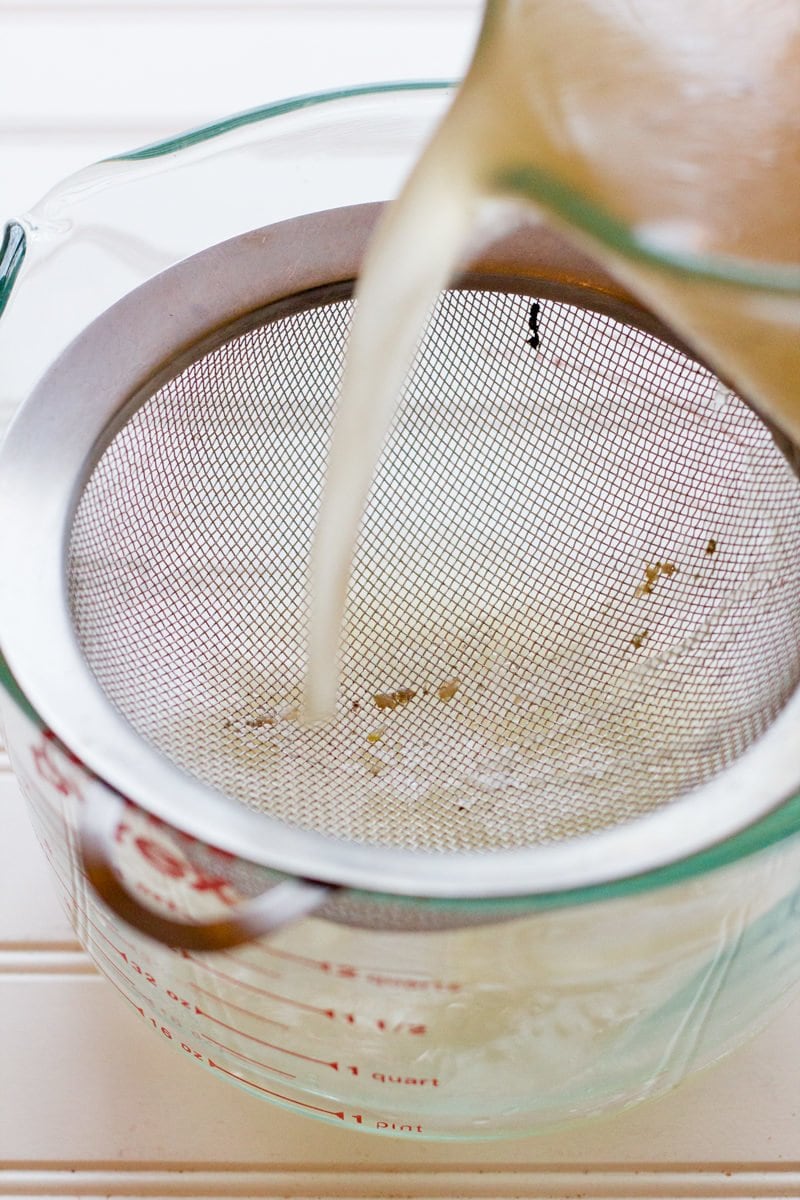 Then, I let it cool completely, and freeze it in four-cup servings in quart zip-top bags. I’ve also frozen them in quart canning jars—freezing in jars works beautifully, just as long as you keep enough headspace. In fact, I’d prefer to freeze them jars, but I just don’t have enough freezer space (mama needs a new freezer!). 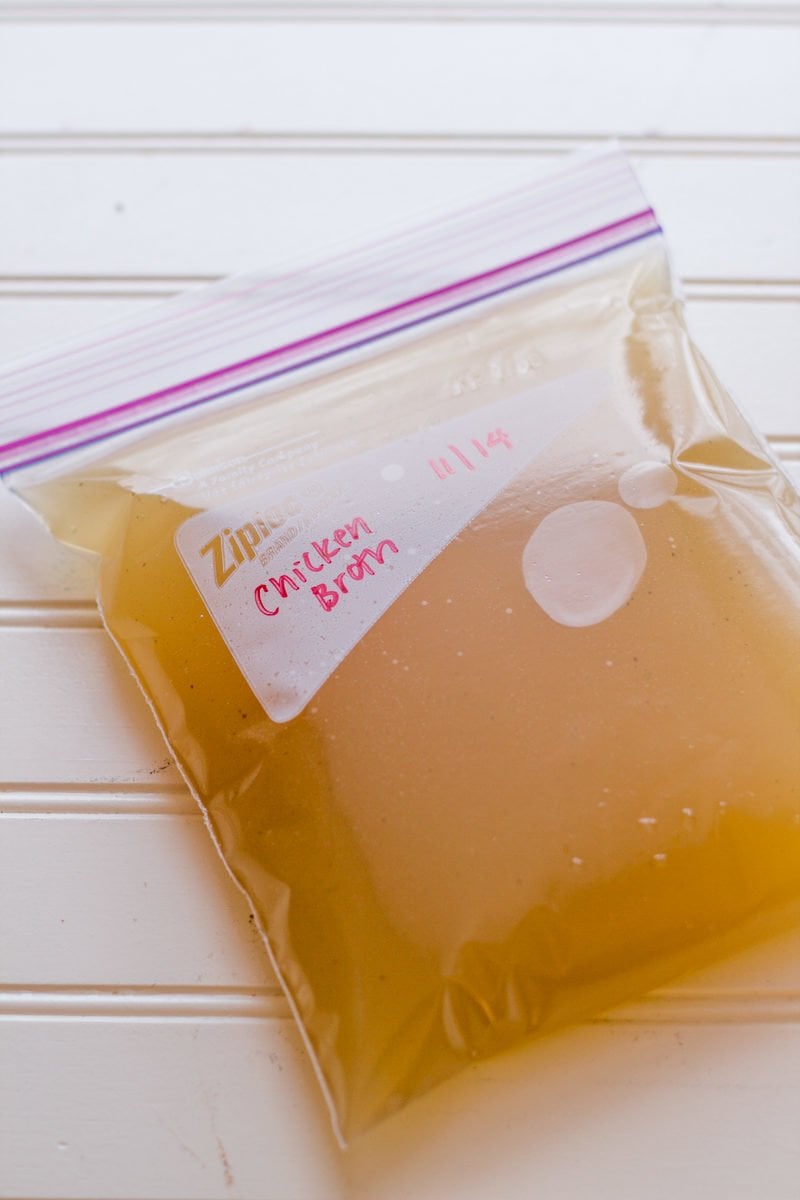 After boiling down, I usually get between 12-15 quarts of broth from each batch (one chicken scrap bag and one veggie scrap bag). And that’s almost always enough to last me until my scrap bags fill back up again. It’s a wonderful system!

And, considering I’m going to have those chicken and veggie scraps anyway, making this broth is totally free. Twelve quarts of good, organic broth runs about $45—that’s a nice savings!

I know a lot of folks say healthy eating is expensive, and I definitely agree it can be, but I think with little tricks like this, and a little bit of time, you can make up for a lot of that extra expense.