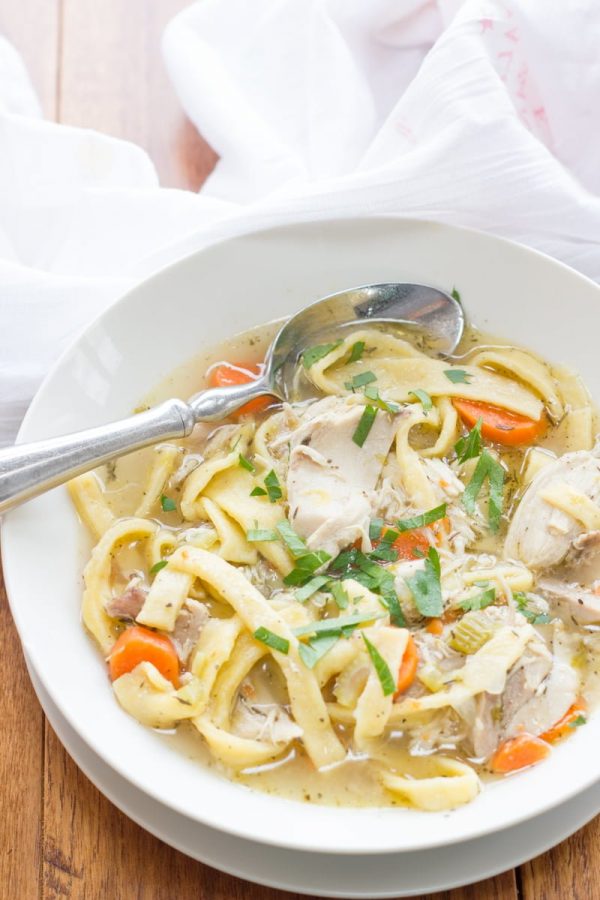 Recipe At-A-Glance
Comfort Food2 hours
Skip the can, and instead make the best Chicken Noodle Soup you've ever had—completely from scratch!
Jump Directly to Recipe 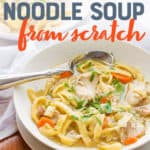 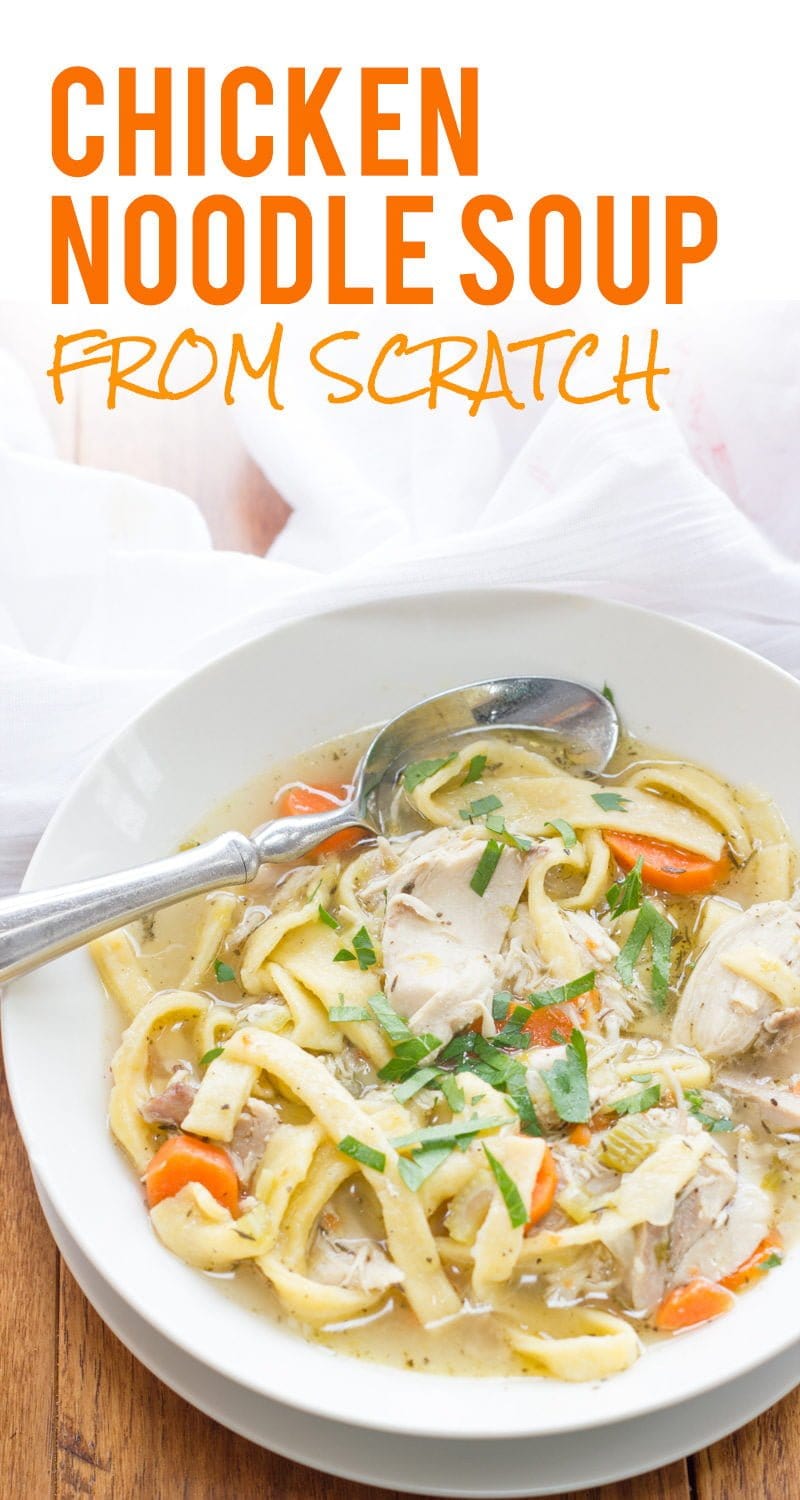 When I have a cold, I tend to just power through without any drugs. For me, if I take anything that makes me feel better, I tend to use that newfound energy to overexert myself. Which leads to my cold sticking around for even longer. It’s best if I just stay away from the medicine cabinet and stick to more comforting type of remedies, like herbal teas and soups. 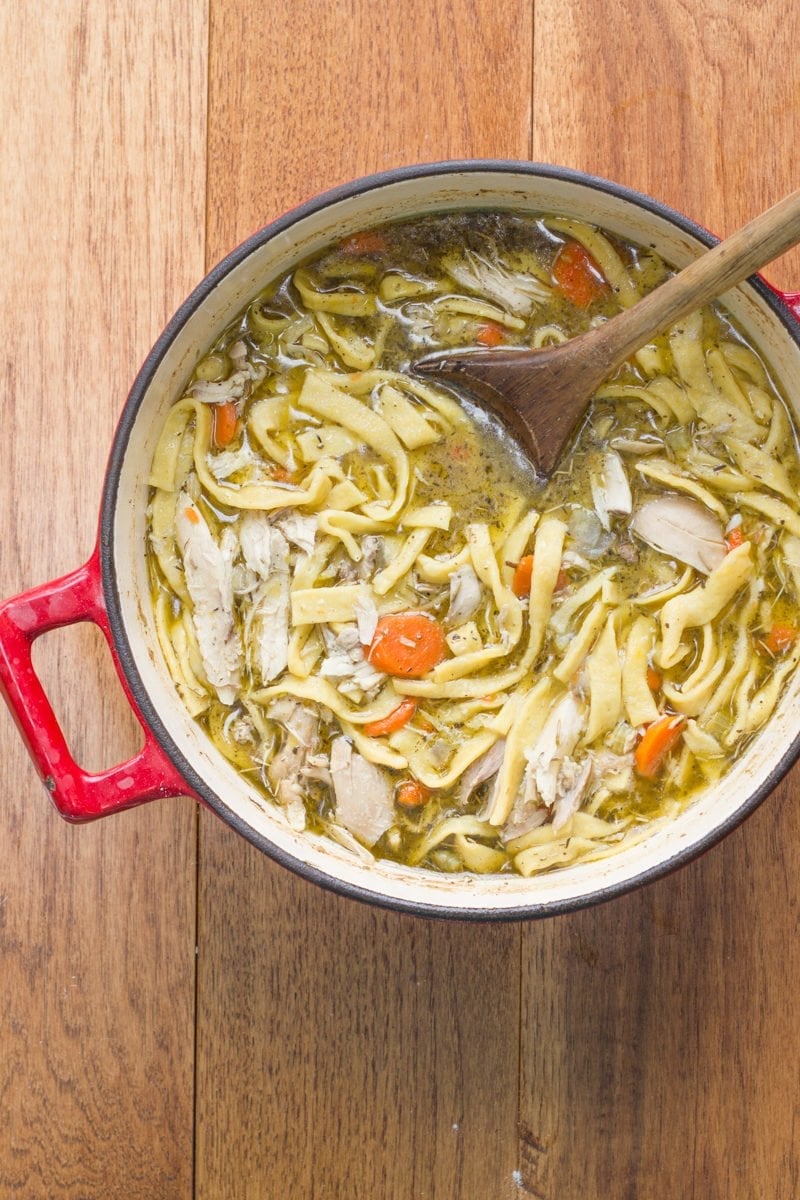 If I’m feeling well enough to hit the kitchen, I always try make myself up a giant batch of chicken noodle soup when I’m sick. And I do it the old-fashioned way—100% from scratch.

It may sound like a crazy undertaking when you’re fighting off a virus, but I actually find making soup from scratch to be super relaxing (weirdo, right?). And it’s really low stress. Nothing is going to suddenly burn. You’re not going to ruin your soup because you had to go blow your nose (and then wash your hands). I get to do some chopping and some simmering and some stirring. And it’s such a slow and lazy process, I can just park myself on the nearby couch if I need a break. 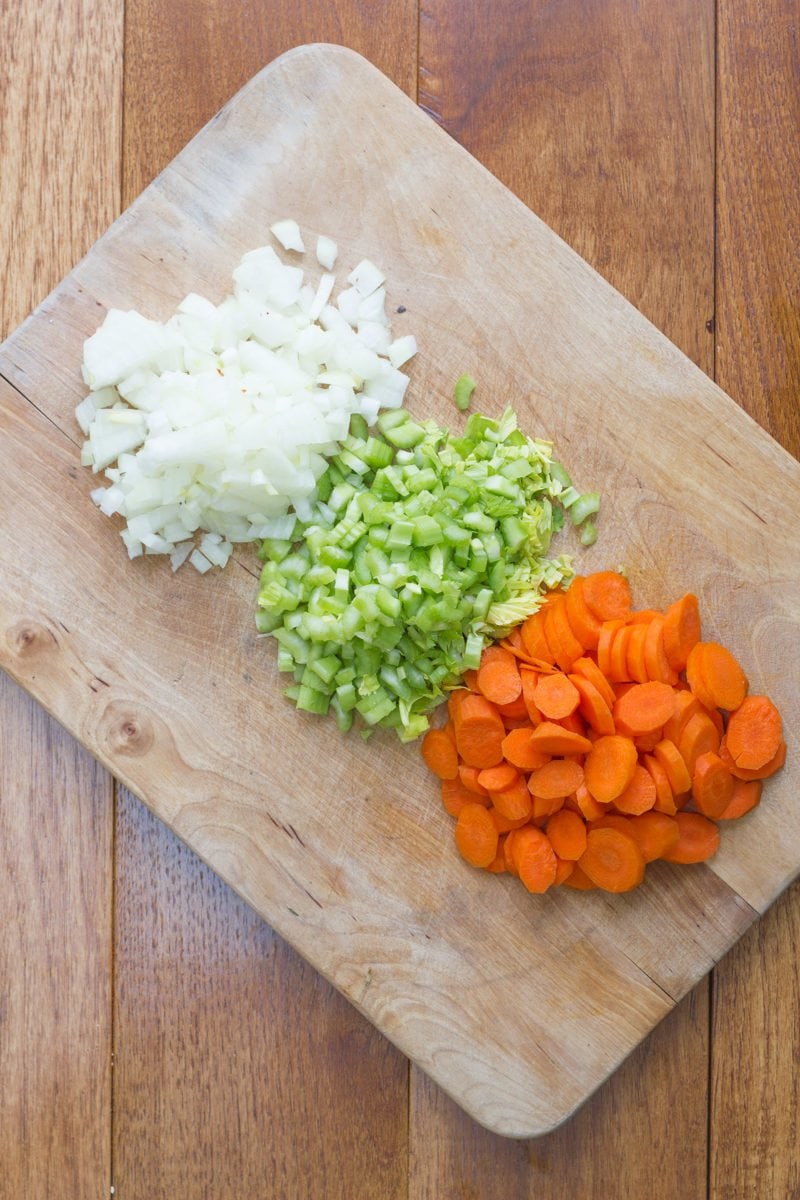 There are two parts of this recipe that really make it “from scratch”—the first is using a whole chicken to create the stock, right in the same pot that you cook the soup in. It gives you so much incredible flavor that you’ll never be able to recreate using a store-bought broth. You can make some darn good soup using the boxed stuff (and the stuff you make at home), but for the best ever chicken noodle soup, make it fresh using a whole chicken. You’ll be happy you did. It’s also cheaper. Around here, you can get a whole, free range, organic chicken for about $15. You’d spend that much on organic broth alone! 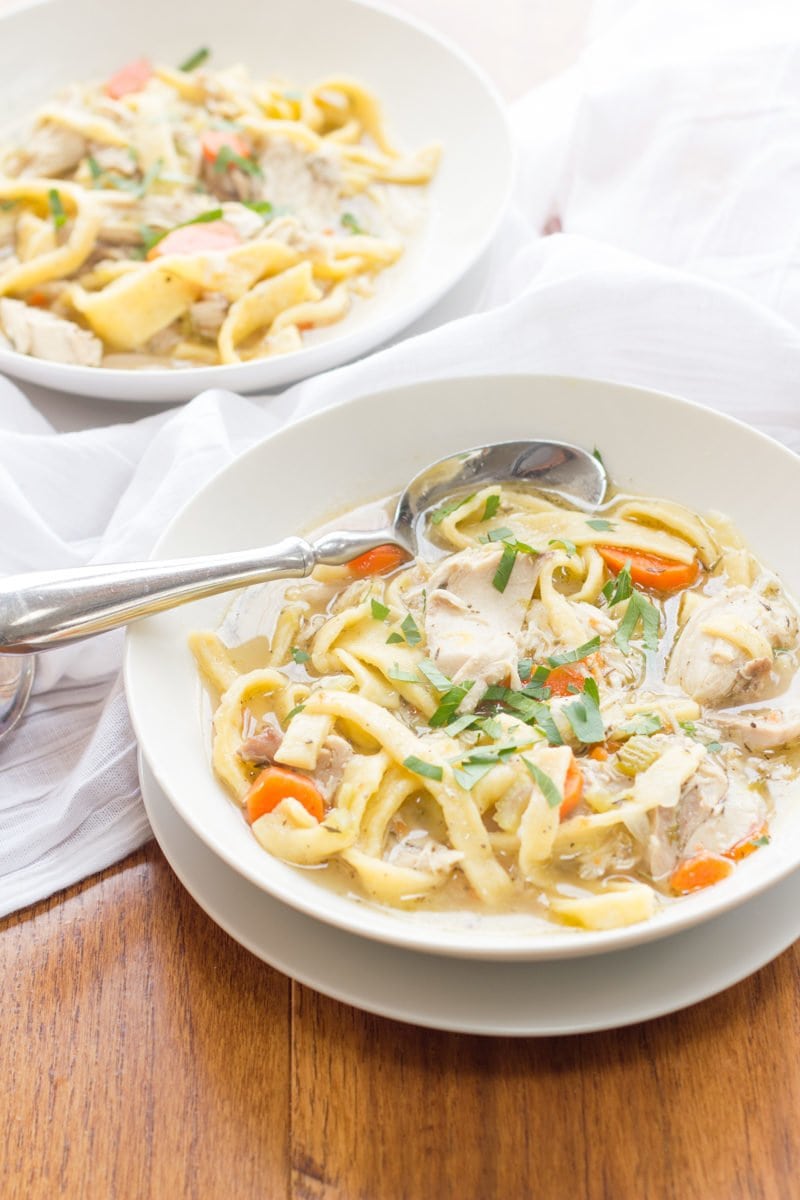 The other from scratch aspect is the egg noodles. You can definitely pick up a bag of egg noodles from your store (especially if you have access to the yummy Amish-made egg noodles they sell around here), but there is something really nice about making your own egg noodles. It sounds time intensive, but it really isn’t. And man, are they yummy. 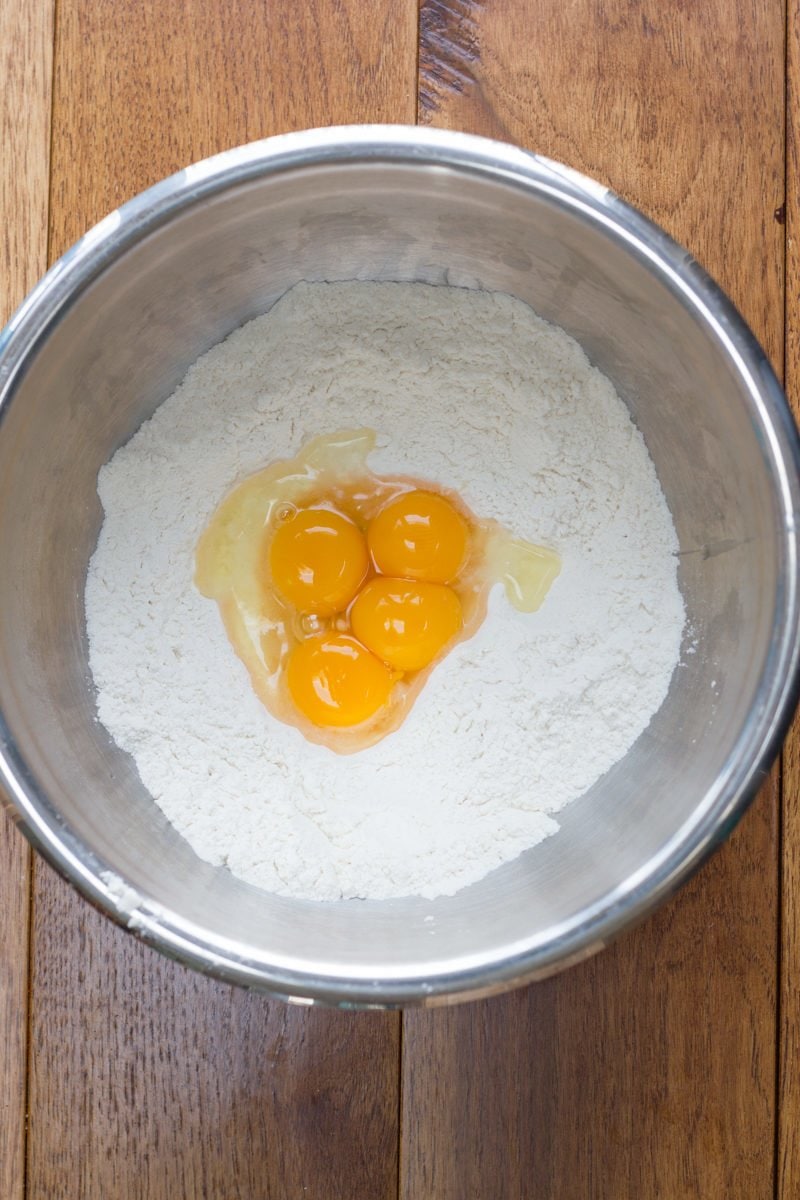 These noodles are remarkably similar to dumplings, but they are just rolled out thinner and sliced smaller. If you’ve never made your own egg noodles before, my one big bit of advice is to roll them as thin as you possibly can. Like, paper, see-through thin. They will expand like those growing dinosaur sponges you used to get from the dollar store as a kid (just me?). 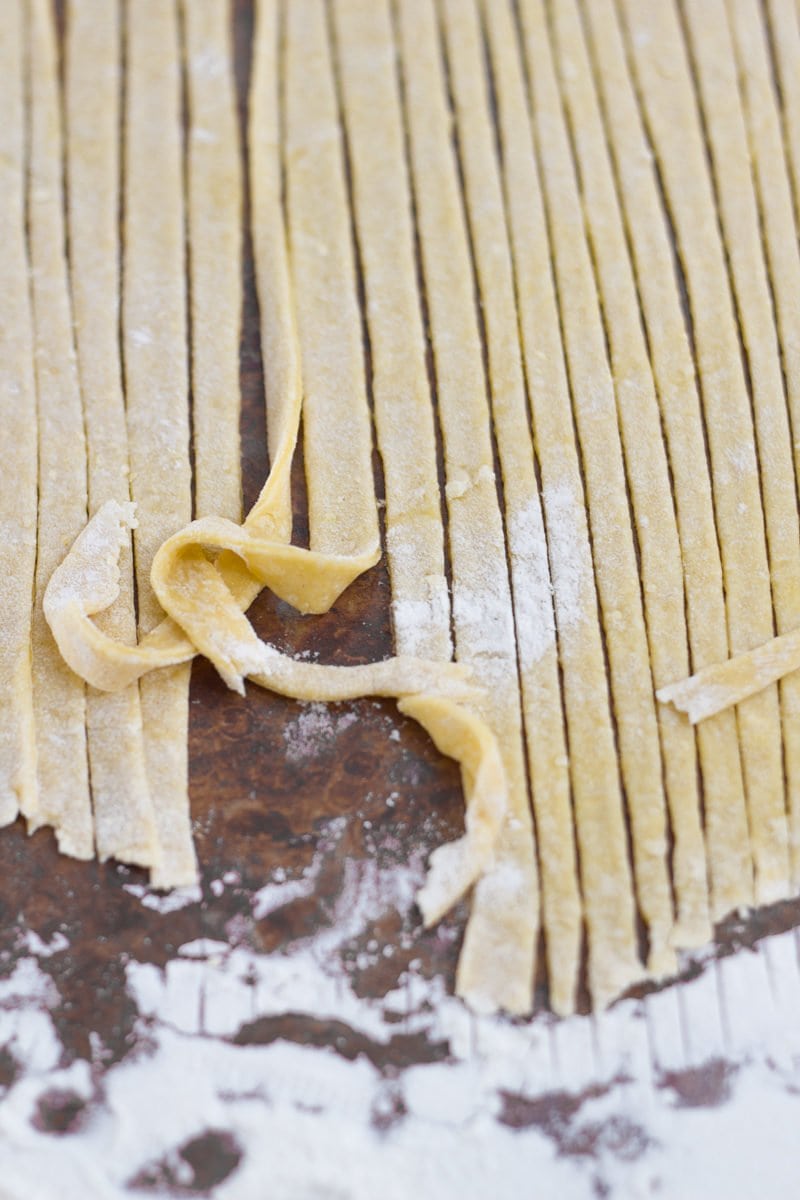 Other than making the broth and the noodles, all the rest of the recipe really requires is some chopping and simmering. You can do that! Even with a head cold!

And the best part about chicken noodle soup—it makes a ton. So you can eat on it throughout your entire illness, giving you plenty of time to rest and recover. Hopefully by the time your leftover soup is gone, you’re feeling much better. 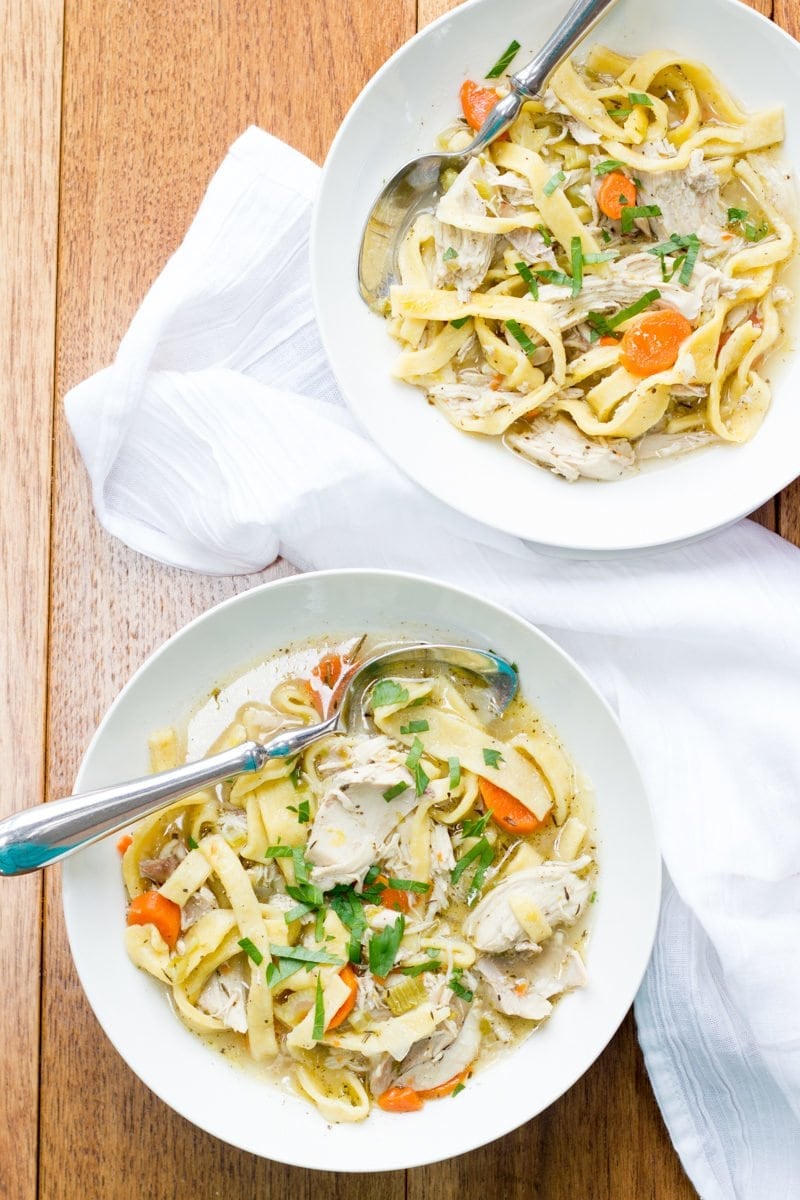 If you aren’t feeling up to making your own noodles from scratch, or if you can’t eat grains or gluten, you could also make my Chicken Zoodle Soup.

If you aren’t sick yourself (I hope you aren’t!), you probably know someone who is, and I literally can’t think of something sweeter than bringing your sick friend a bowl of chicken noodle soup made from scratch. You always see people doing that on TV shows and in the movies, and it always seems like such a nice thing to do. Plus, it makes enough that you can keep some at home for yourself, because chicken noodle soup isn’t just for when you have the crud. Everyone wins.

Depending on how much broth your noodles absorb, you might need to add a cup or two of water to thin out the soup after the noodles are finished cooking (or just eat it thick!).