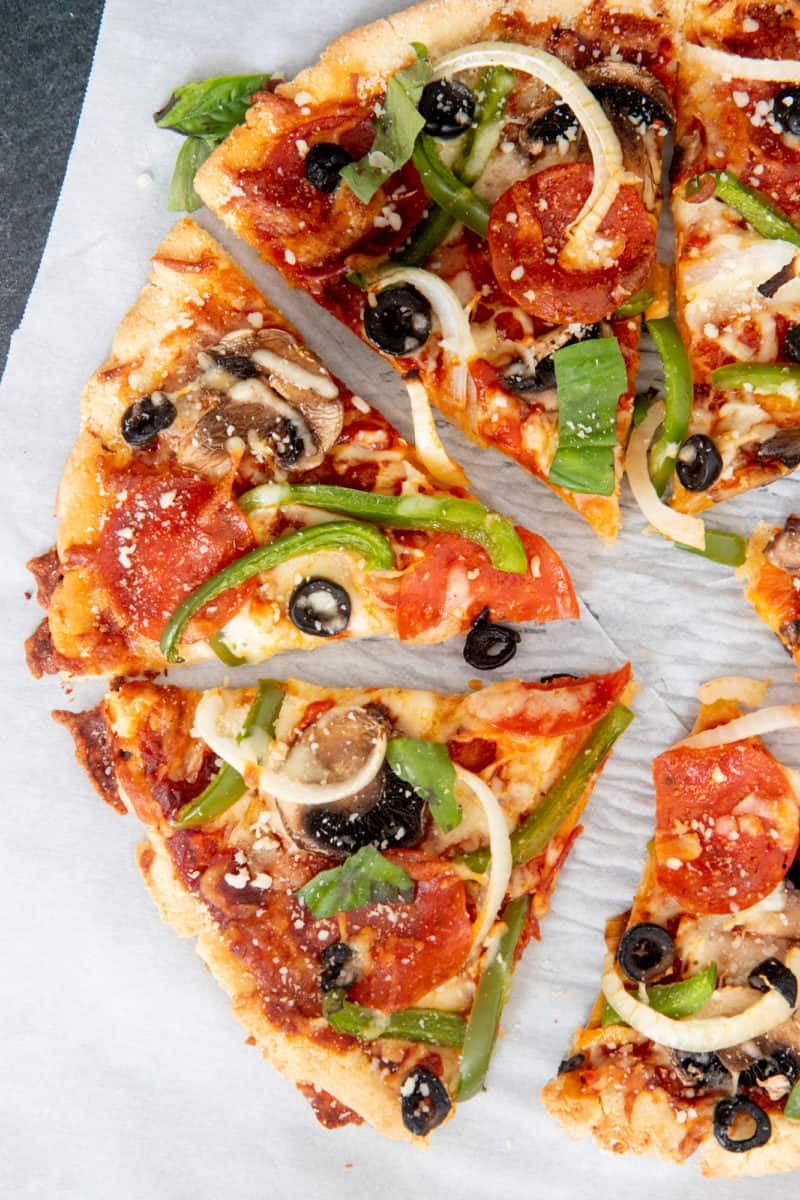 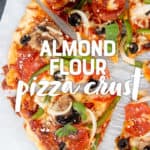 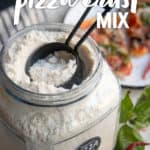 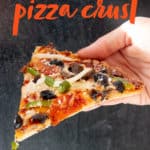 When my healthcare professional first suggested I cut out grains to help reduce inflammation in my body, my first reaction was, BUT WHAT ABOUT PIZZZAAAAA!?! The thought of never again having a perfectly cheesy, doughy piece of pizza made me almost break down in tears.

I eventually recovered from my grief and got to work in the kitchen. I first started my journey for the perfect grain-free, gluten-free pizza crust by testing allllll the recipes that are already out there. And I mean ALL of them. There is a reason that this recipe is going up two full years after I started eating this way—and that’s because it took a long journey to get to what I think is the BEST almond flour pizza crust recipe out there. 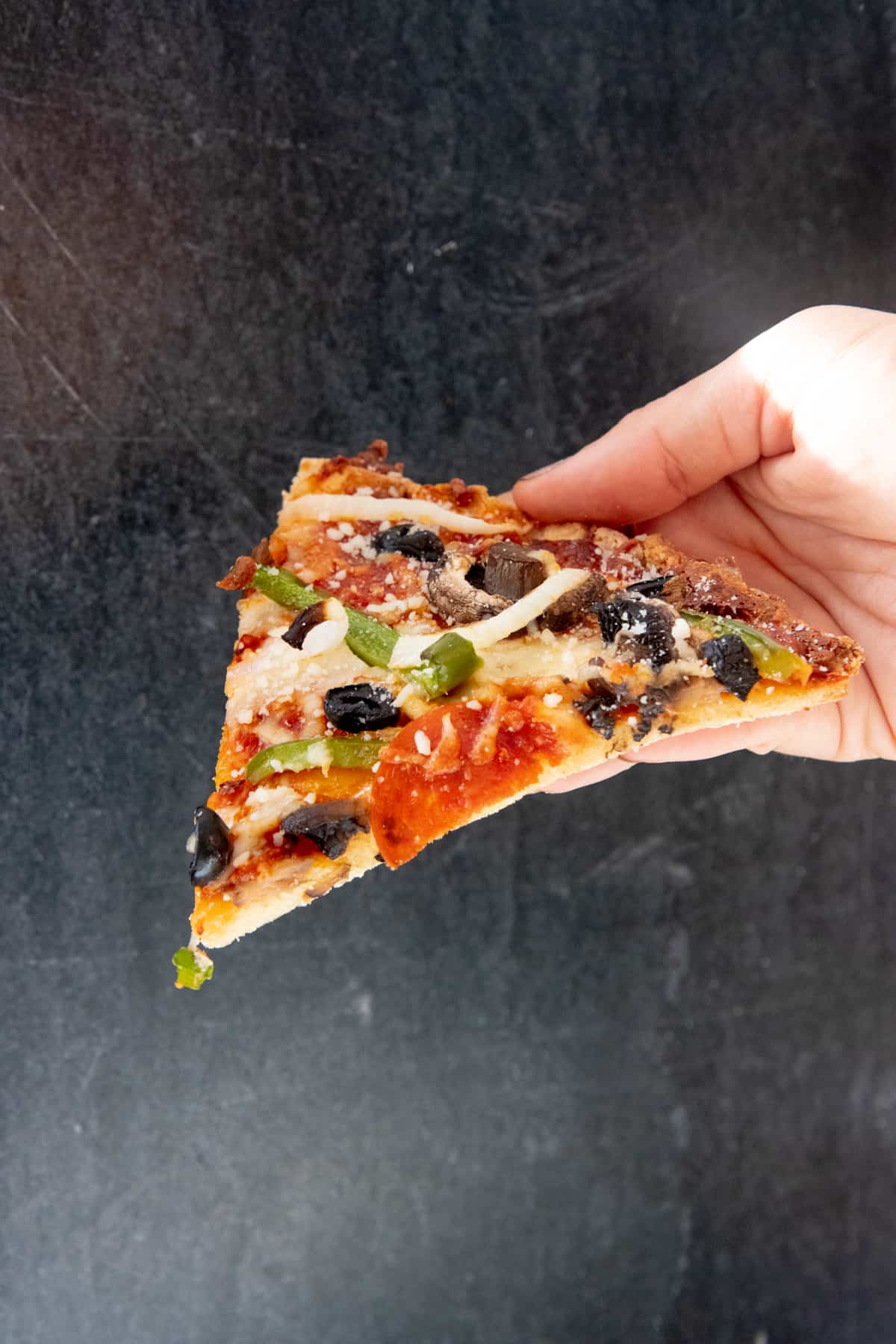 Many of the recipes that I tried were too floppy (I am not one of those people who like to eat pizza with a fork). Or too crumbly. Or too crispy. Or too taste-like-coconut-y. Or, maybe the worst sin of all, took way too much time start-to-finish for my weekly Friday night pizza. I’m already exhausted from a full work week, so I do not want to pull out a million ingredients and spend two hours crafting homemade pizza.

Eventually, I landed on a pizza crust recipe by Frankensteining together a number of different recipes—and the flavor and texture were absolutely top-notch, but it was a wee bit too time-consuming. I know a recipe isn’t a good fit time-wise when I find myself drifting to ready-made convenience foods, and I found myself relying on frozen grain-free pizzas more often than I wanted—even though I had this super tasty recipe in my back pocket. So it was either go bankrupt buying $10 a pop specialty pizzas or streamline the process, so streamline the process I did by tweaking the original recipe and turning it into an easy-to-use pizza crust mix! Just grab a scoop of the pre-made mix, mix it up with a handful of easy-to-grab ingredients, and you’re in the pizza business. 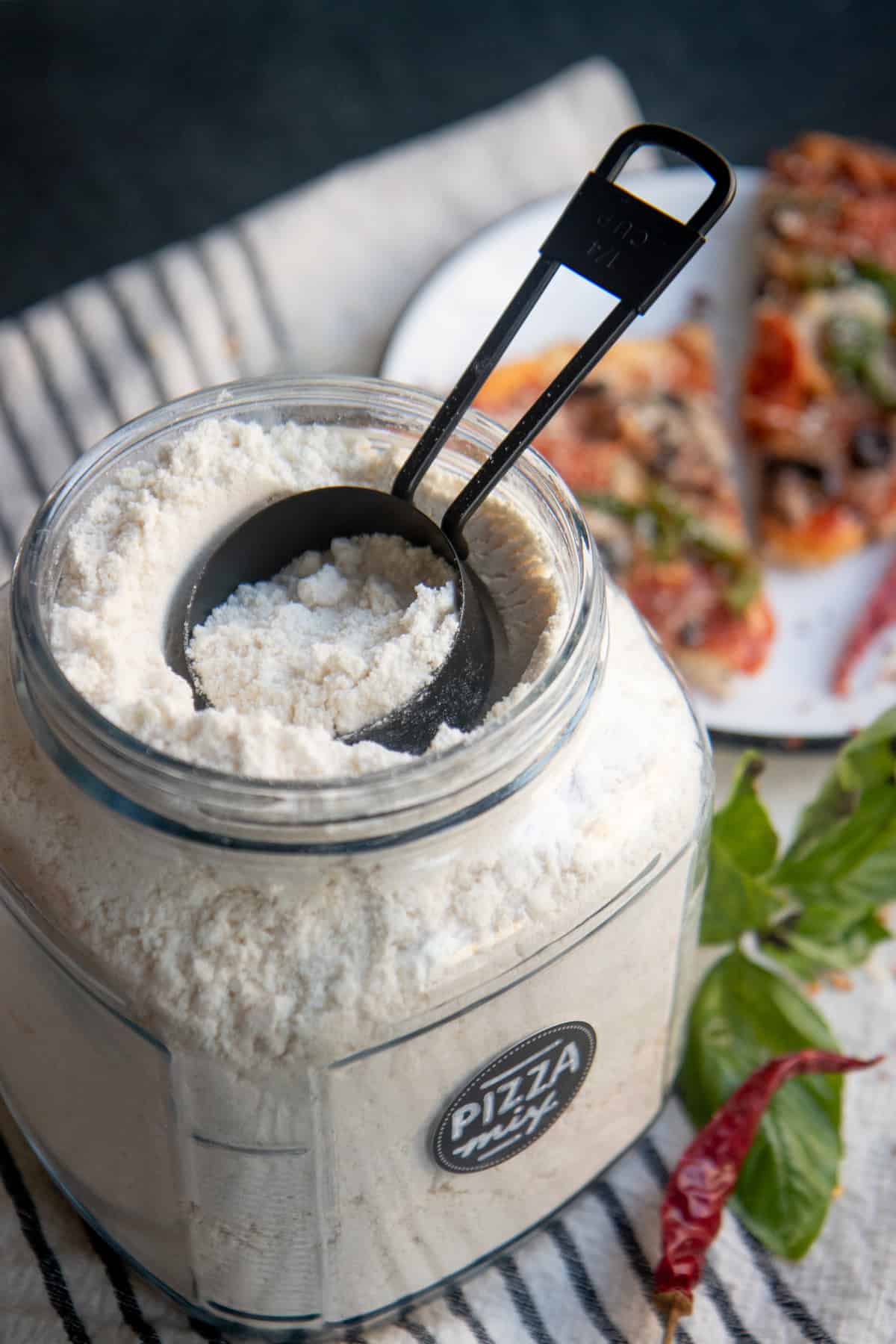 We call this pizza crust “almond flour” crust because that’s the predominant flavor—it’s got a great nutty undertone—but the problem I’ve found with strictly or even mostly almond flour pizza crust is that it turns bready and crumbly. Not necessarily bad qualities in general, but definitely not what I want in a pizza crust. In this recipe, almond flour is used to make it sturdy, flavorful, and hearty, but it’s also combined with tapioca flour and coconut flour to make it chewy and crispy. In the mix itself, I also added garlic powder and salt for seasoning. When you make the mix into pizza crust, you add in water, olive oil, apple cider vinegar, and an egg for liquid ingredients.

Is this a yeast-free pizza crust mix?

Yes! This pizza crust is completely yeast-free. I have tried adding yeast and letting it rise for a bit to give that distinctly yeasty flavor, and it does add another dimension—although it absolutely isn’t necessary. We’ve included this “bonus round” in the notes section of the printable recipe down below. 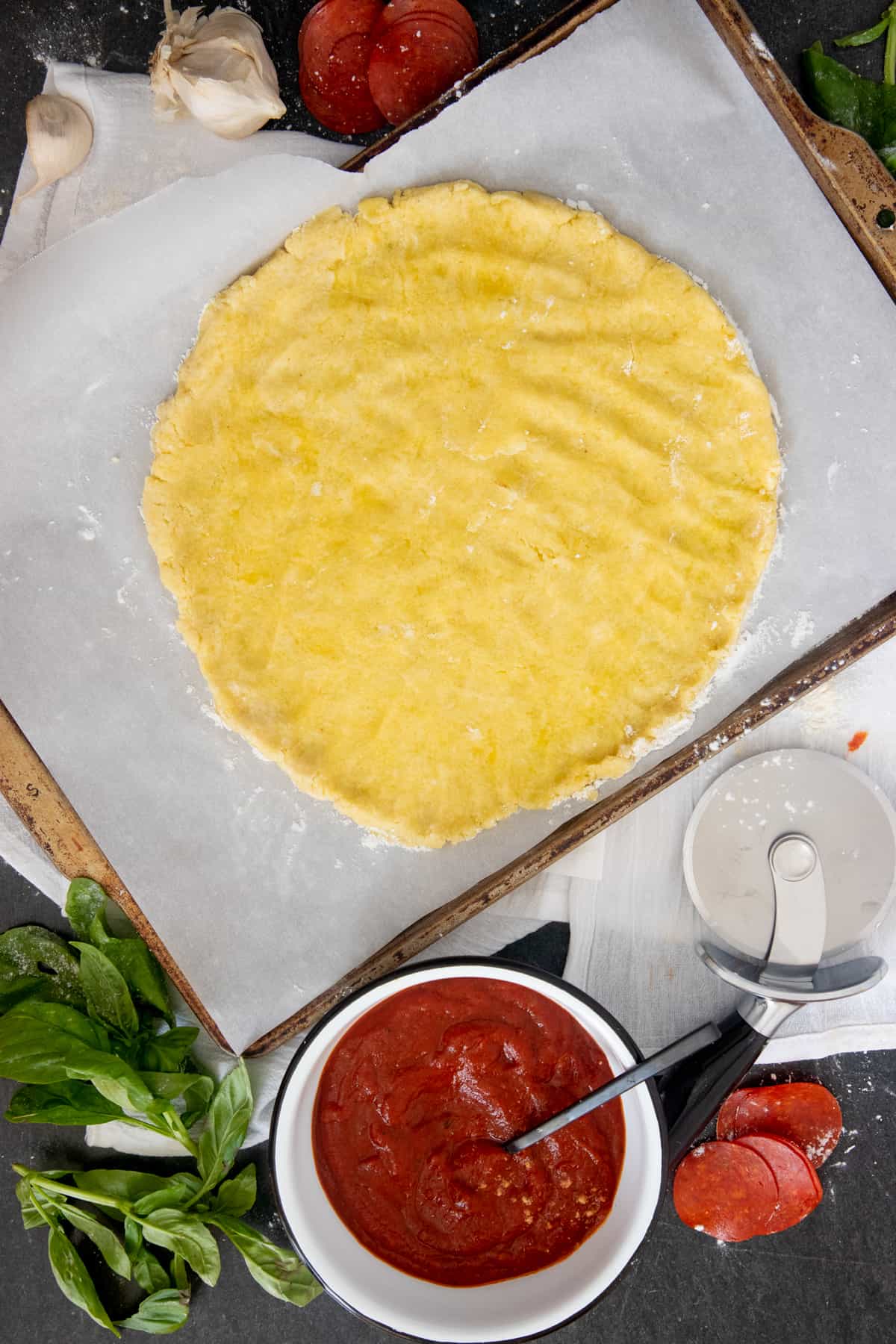 Wait, can you even eat pizza on a paleo diet?

You sure can eat pizza if you are following a paleo diet! Just as long as the pizza is dairy-free and grain-free, you’re golden. Make sure to leave off the cheese! I highly recommend trying a pizza with my Cashew Alfredo Sauce as the pizza sauce, with roasted chicken, spinach, and some Cashew Parmesan sprinkled on top. It’s gooey and delicious, and you’ll never miss the cheese! It’s basically my Spinach Chicken Alfredo Pizza without the intestinal discomfort (at least for me).

What about a Whole30 diet?

Nope. If you’re eating Whole30, pizza of any kind is off-limits until you’re through your 30 days—even if the ingredients are technically Whole30 compliant (like this recipe is). Why? I’ll let the Whole30 website explain that. 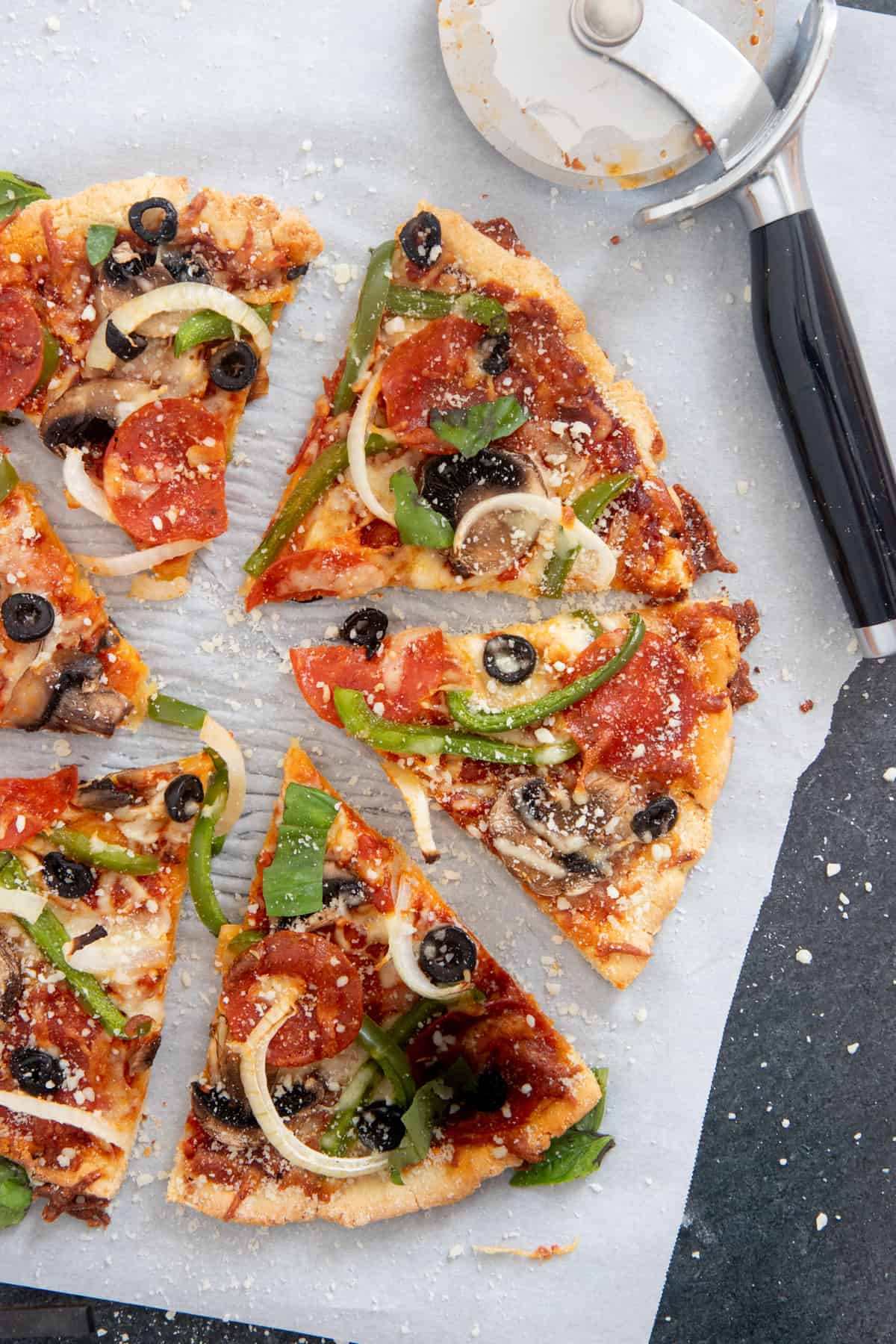 Can you make this paleo pizza crust ahead of time or even freeze it?

Yes, you sure can. And we’ve included the directions in the recipe for make-ahead and freeze-ahead. HOWEVER, the joy of this pizza crust mix is that it’s ready to go whenever you have a hankering for pizza. It takes all of about four minutes to mix up from scratch—you don’t even really need to make it ahead or have it in the freezer!

Sure is! This is a dairy-free, grain-free, gluten-free pizza crust recipe, which means it can fit into a ton of different diets.

Yes, for the most part, you can play around with the flours included in this pizza crust mix recipe, with one exception—the coconut flour. Coconut flour marches to the beat of its own drummer, and it’s really almost impossible to substitute for. There is a limited amount of coconut flour in each crust, so I don’t think the crusts taste super coconutty.

Substitution options for the almond flour

Any nut flour should do the trick here, although I will warn you that the more strongly flavored the nut, the more pronounced the flavor will be in the crust. Nowadays, you can pick up blanched almond flour at almost any grocery store, or online for a good price at Thrive Market and in bulk on Amazon.

Substitution options for the tapioca flour

I’ve had good luck subbing in arrowroot powder for the tapioca flour. However, I try to stick to the tapioca flour because it runs about half the price of arrowroot! I only use arrowroot if it’s a pizza-making emergency (those happen, you know). A couple of important notes: tapioca starch and tapioca flour are the same thing, so feel free to use them interchangeably. Tapioca starch/flour is not the same as cassava flour, even though they come from the same plant. 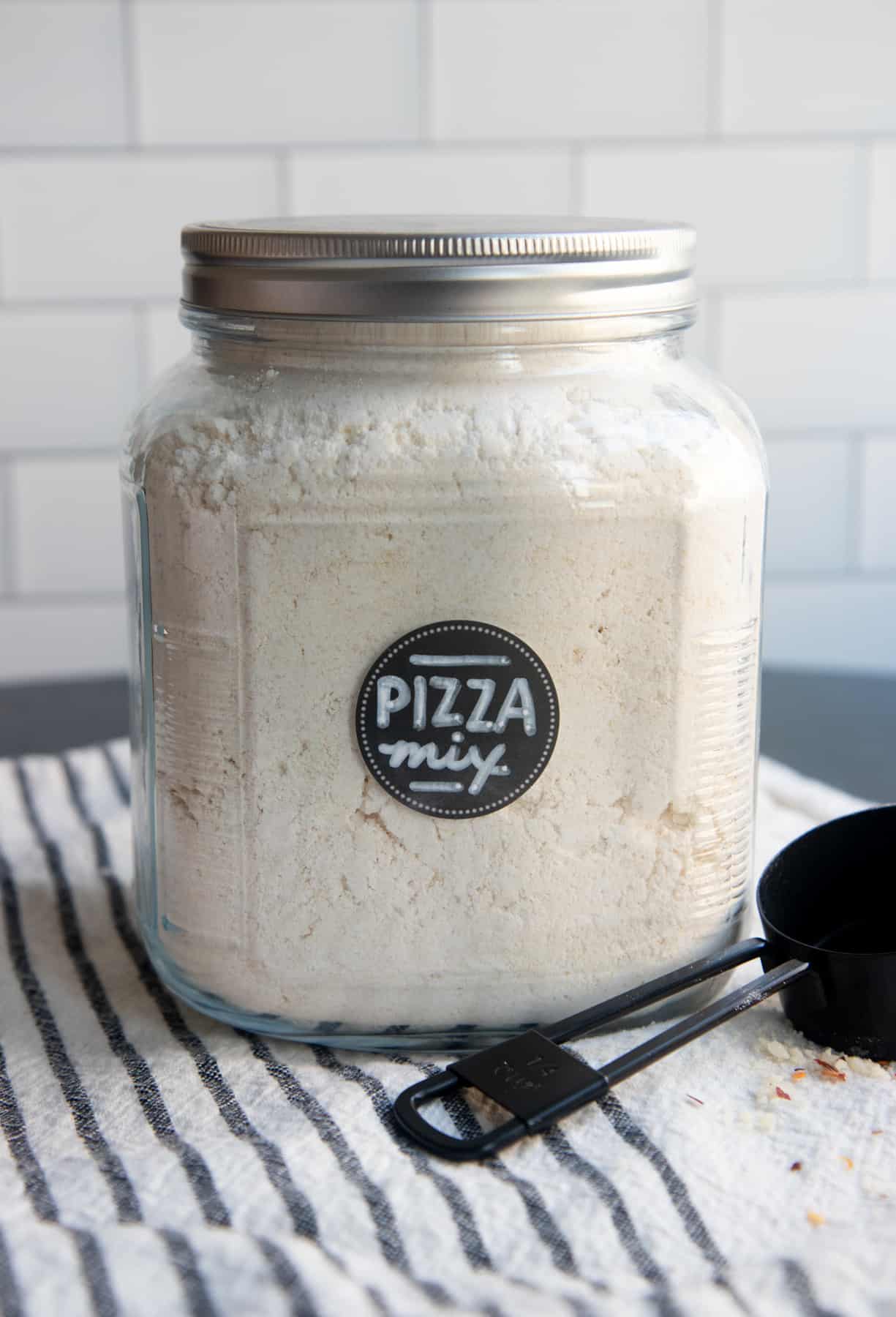 How can you make sure this almond flour pizza crust is crispy?

The beauty of mixing flours together in this ratio and having it ready to go ahead of time is that your pizza crust will be inherently so much more crispy than the almond flour pizza crusts you may be used to. I prefer to bake my pizza at a high temperature and on parchment paper to really help crisp it up. I love using reusable silicone baking sheets wherever I can, but when you’re trying to crisp something up (like with roasted pumpkin seeds or crispy baked sweet potato fries), parchment paper is really the way to go. 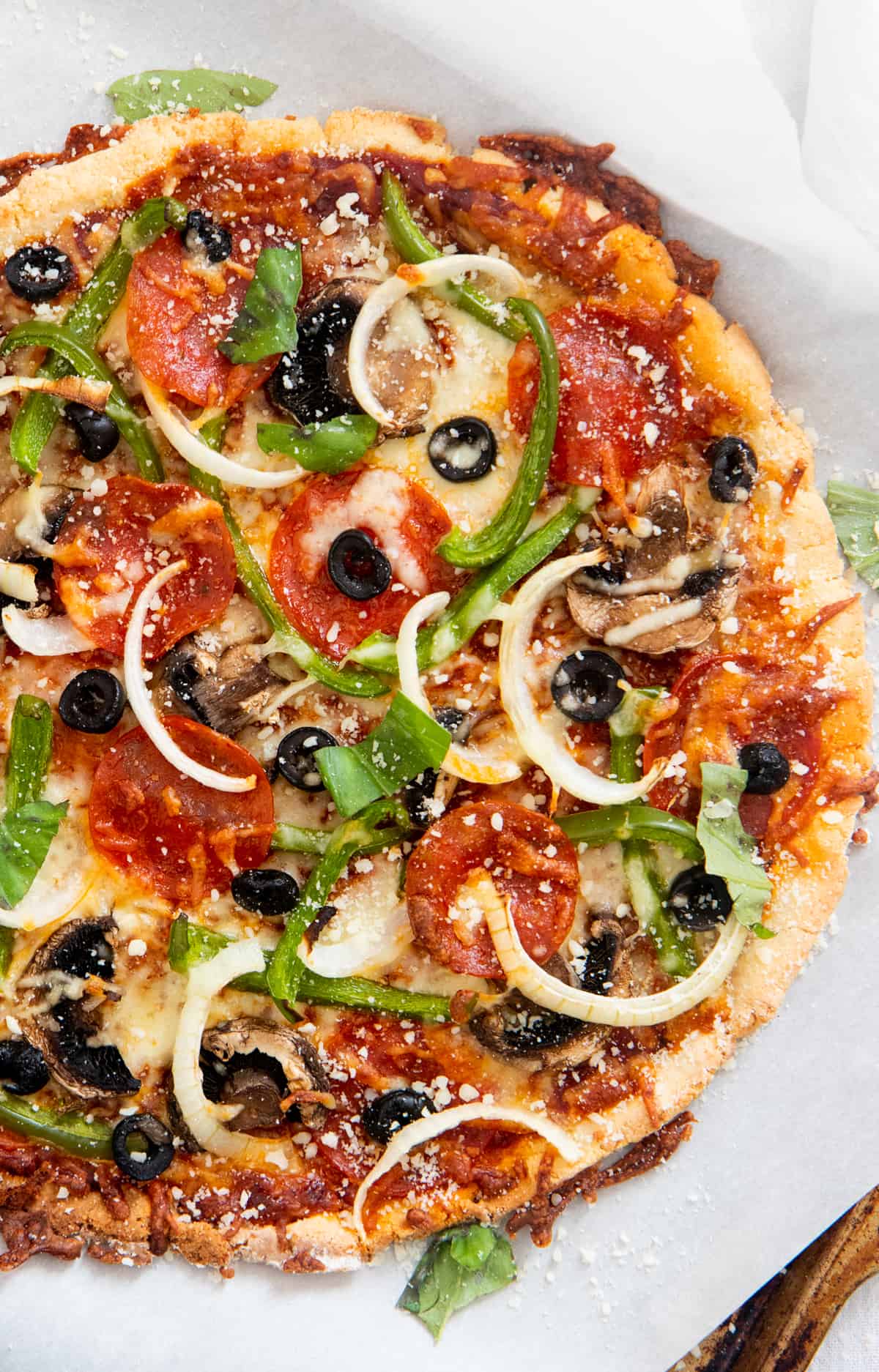 Thankfully, as I’ve healed from Lyme, I’ve been able to loosen up the restrictions on my diet a bit. My body now allows me to occasionally enjoy a fully-loaded, gluten-filled, cheese-covered pizza, and I happily (and healthfully) enjoy every bite! You gotta nourish your soul, too, friends. But when it comes to “day-to-day” pizza (yes, that’s a thing, I’m making it a thing), this pizza crust mix is my go-to. I can happily eat pizza every Friday night without my body getting mad at me, and that’s just the best gift on the planet. I hope you enjoy! 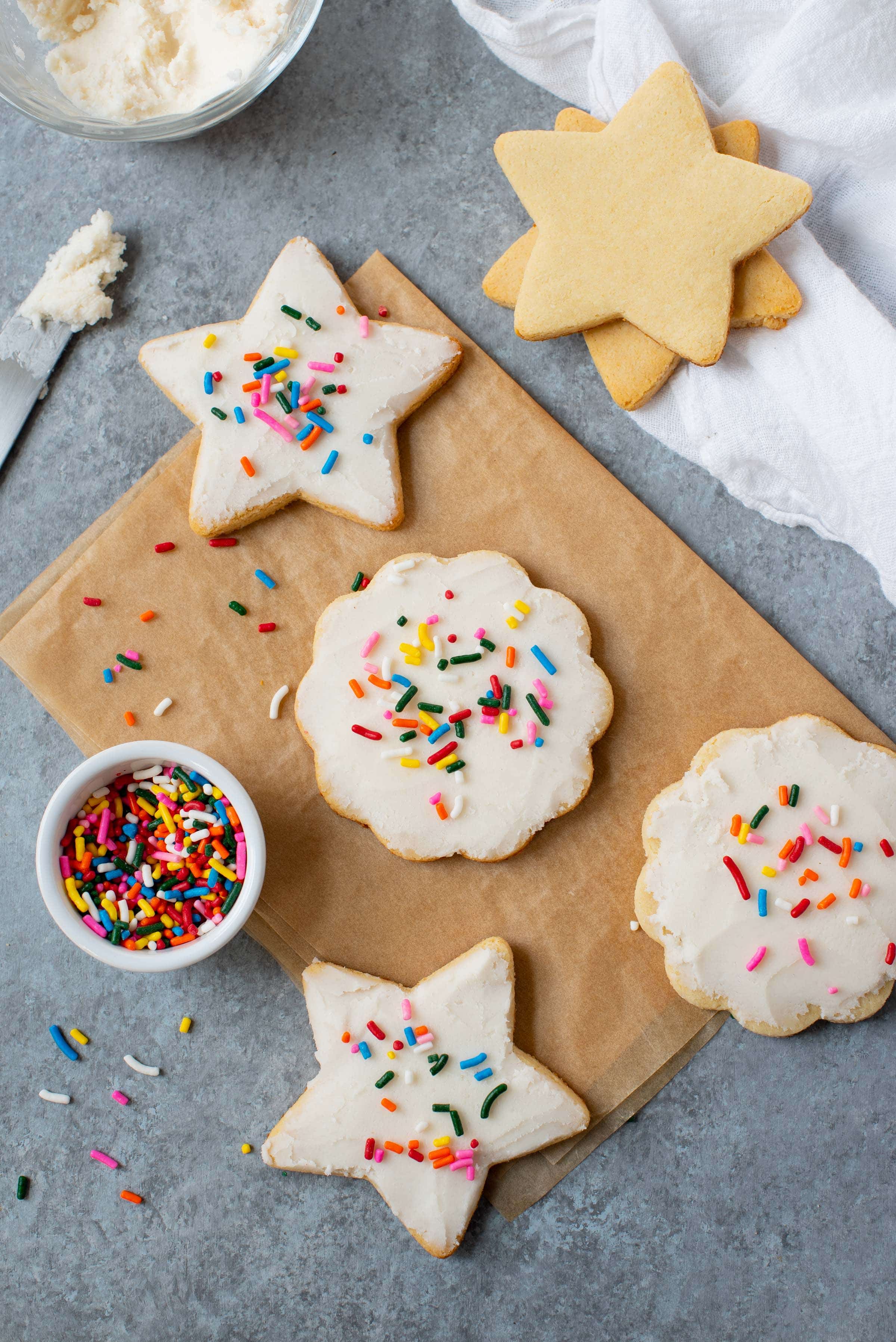 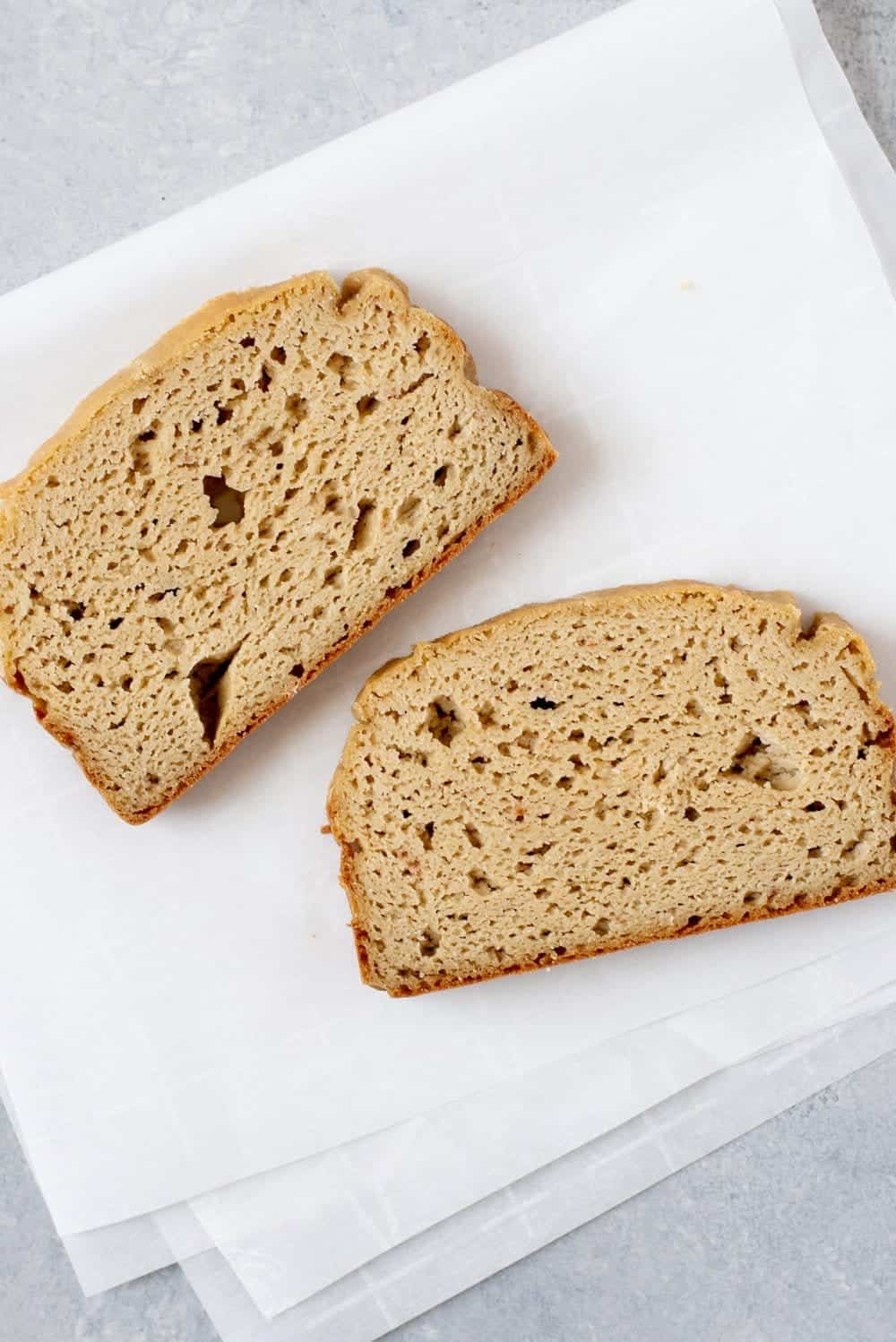 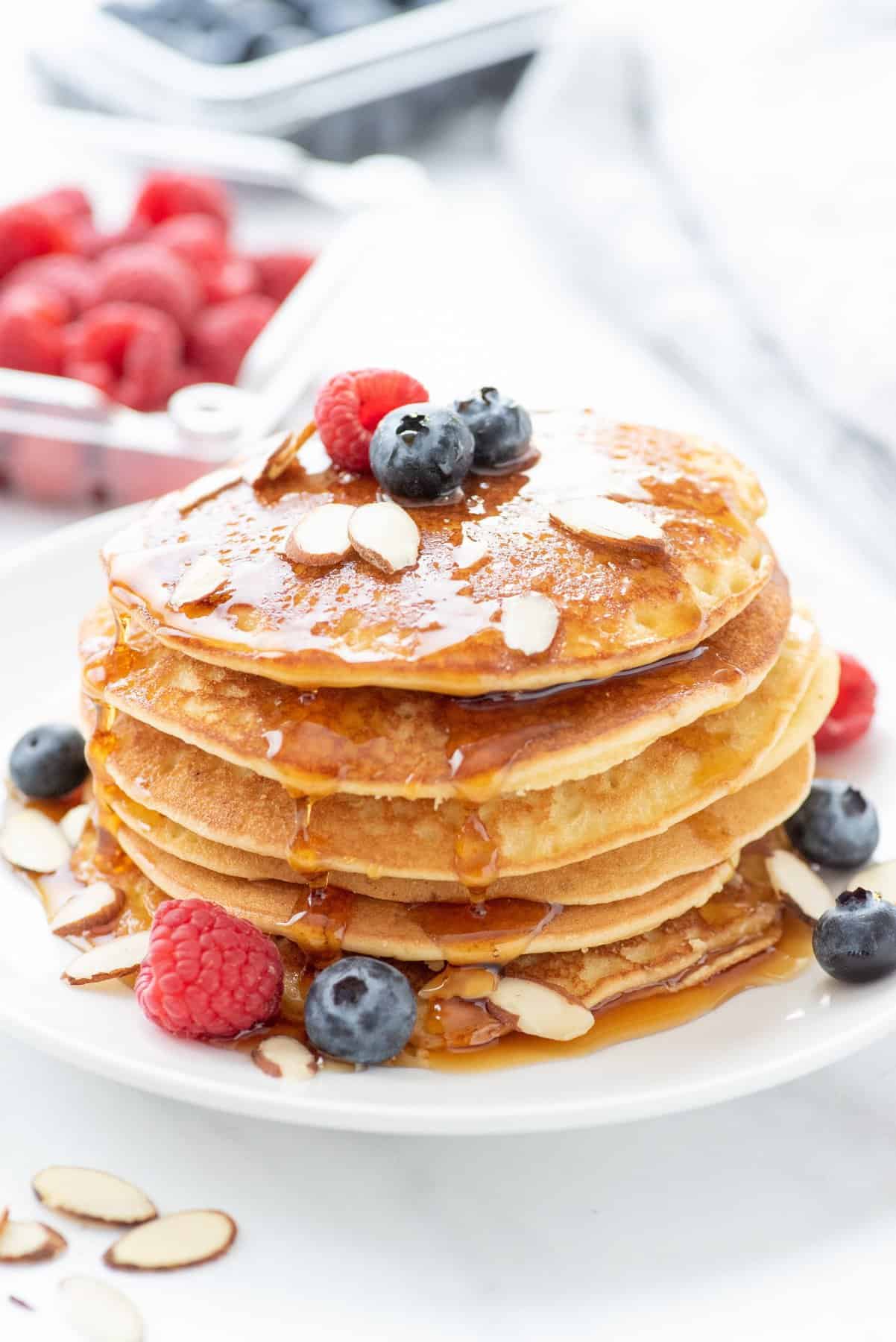 To Make the Mix

To Make the Crust