Meal Plans →
Recipe At-A-Glance
...
Slow Cooker, Gluten-Free3 hours
Use this amazing ham glaze recipe to make a juicy, flavorful ham anytime! This Slow Cooker Ham is so simple to make, you can even serve it on a weeknight.
Jump Directly to Recipe 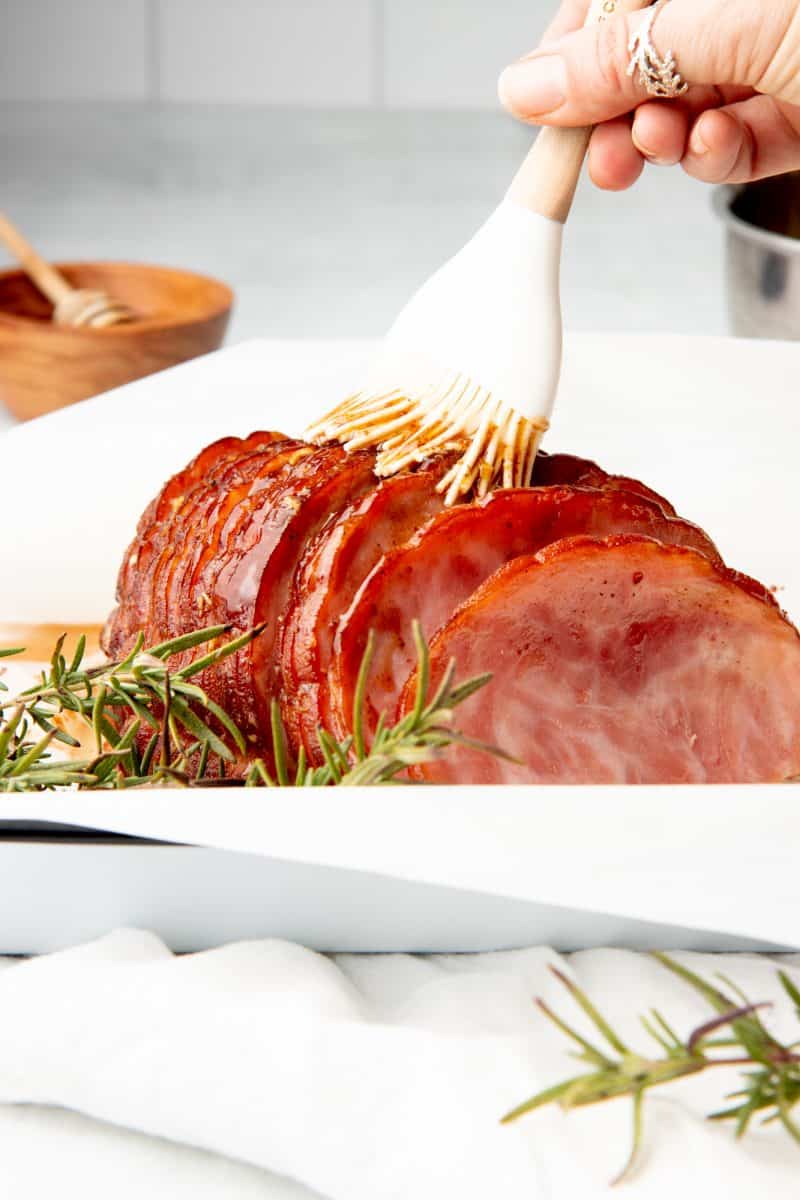 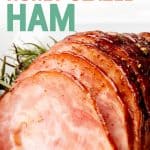 We tend to reserve cooking juicy, tender ham for holidays, and while I love a good ham for Christmas or Easter dinner, I’m here to tell you that by using the slow cooker, making a ham is easy enough for even the busiest of weekdays!

My method for slow cooker ham results in a tender, juicy, über-flavorful ham with just a few minutes of hands-on time. The secret: an amazing homemade honey ham glaze that whips up using ingredients you have on hand. This rich and thick glaze adds tons of moisture and flavor! 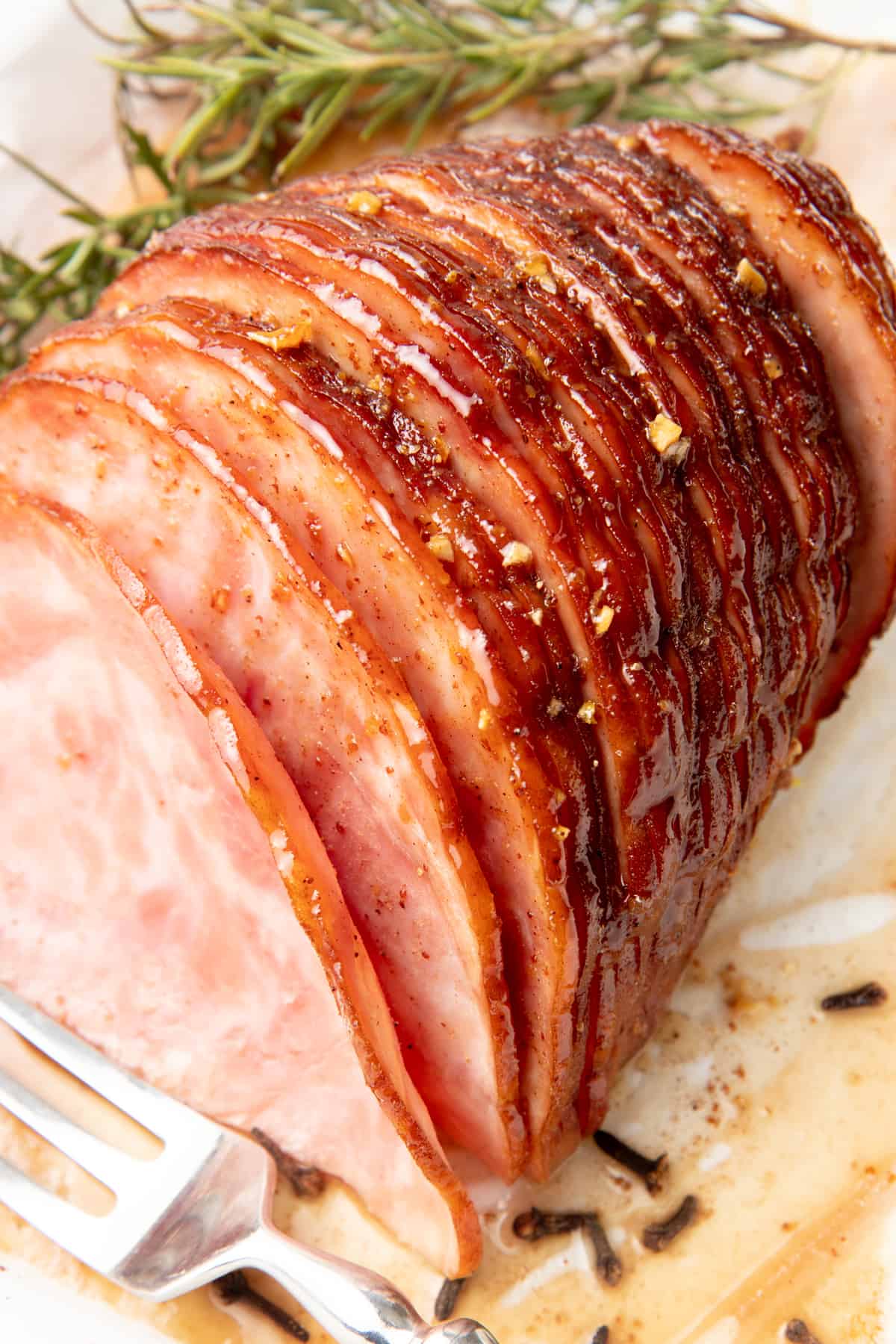 Should I buy a boneless or a bone-in ham?

There are some pros and cons to going with either type of ham, so it’s more of a personal decision than anything. Here’s some info that might help you make a decision:

I’ve made this recipe with both boneless and bone-in hams, and I do prefer the flavor and moisture you get from a bone-in ham—but it’s hard to beat the convenience of a boneless. It’s really up to you, whichever you prefer.

Do I need to get a spiral ham?

Having a pre-sliced ham (also sold as a spiral-cut ham) will save you a lot of headaches when it comes time to carve, and it also has the added benefit of allowing you to get all the flavorful glaze in between all the slices. A pre-sliced ham is less important if you are getting a boneless ham, as those are much easier to carve than a bone-in ham. 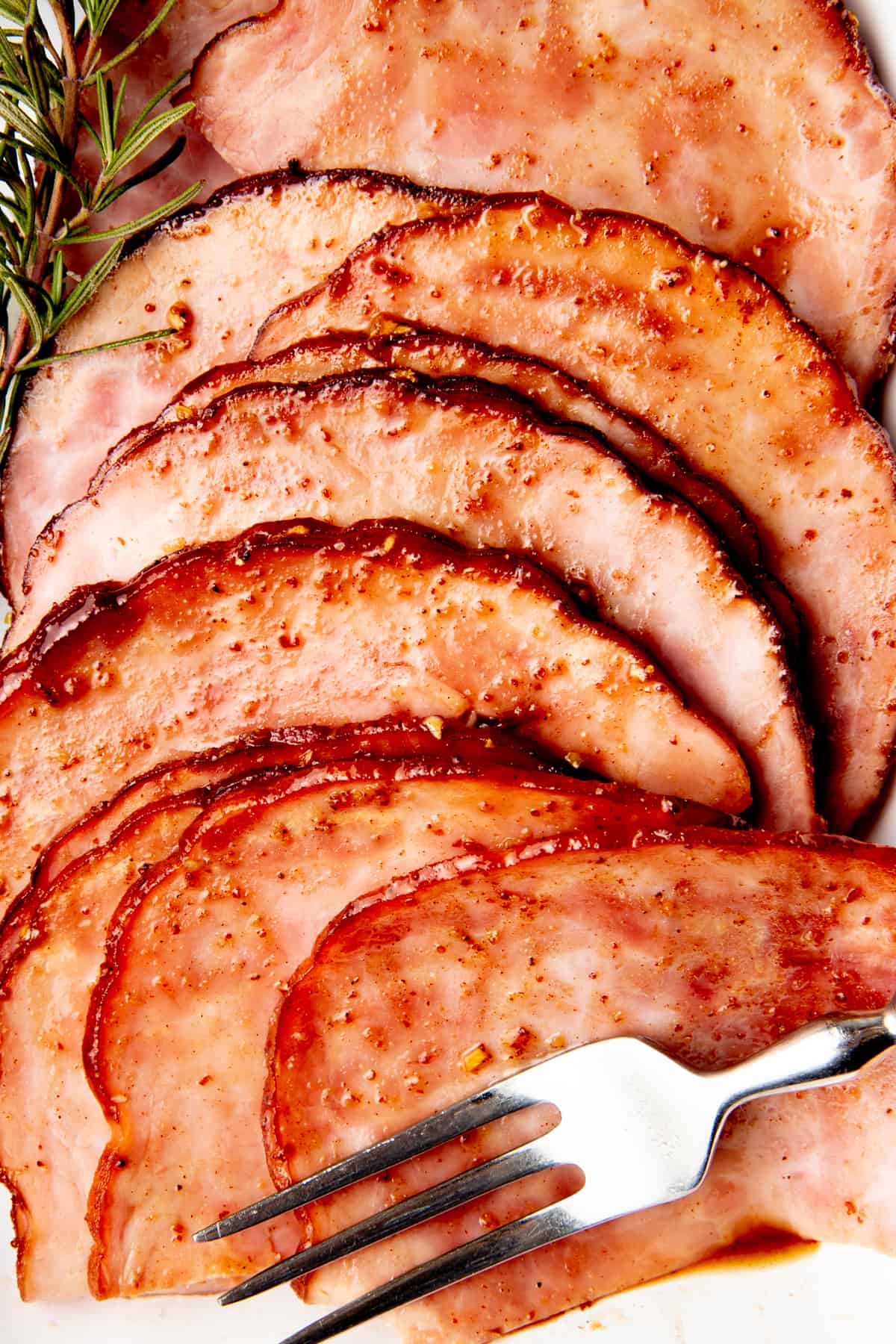 What size ham should I look for?

The general recommendation for ham serving sizes is that you need about 1/2 pound of boneless ham per person, or 3/4 pound bone-in ham per person. I have found that a boneless quarter ham (about three pounds), is plenty to serve my family of three for dinner, and still have plenty of yummy leftovers for next-day sandwiches.

Wait, will a ham really fit in my slow cooker?

Now, I know what you’re thinking—there is no way my slow cooker will hold a ham. And, well, that’s true if you have a small slow cooker. But if you have a larger one (like my six quart one), you can absolutely fit a quarter ham with the lid on, and you can even fit a half ham if you make a fake lid with aluminum foil—it works perfectly.

I’ve found that most smaller hams (quarter hams) fit in a slow cooker pretty well. The largest ham I was able to fit in my slow cooker was a 7-pound ham. If you end up going bigger, you might have to trim off some of the end to fit it well. 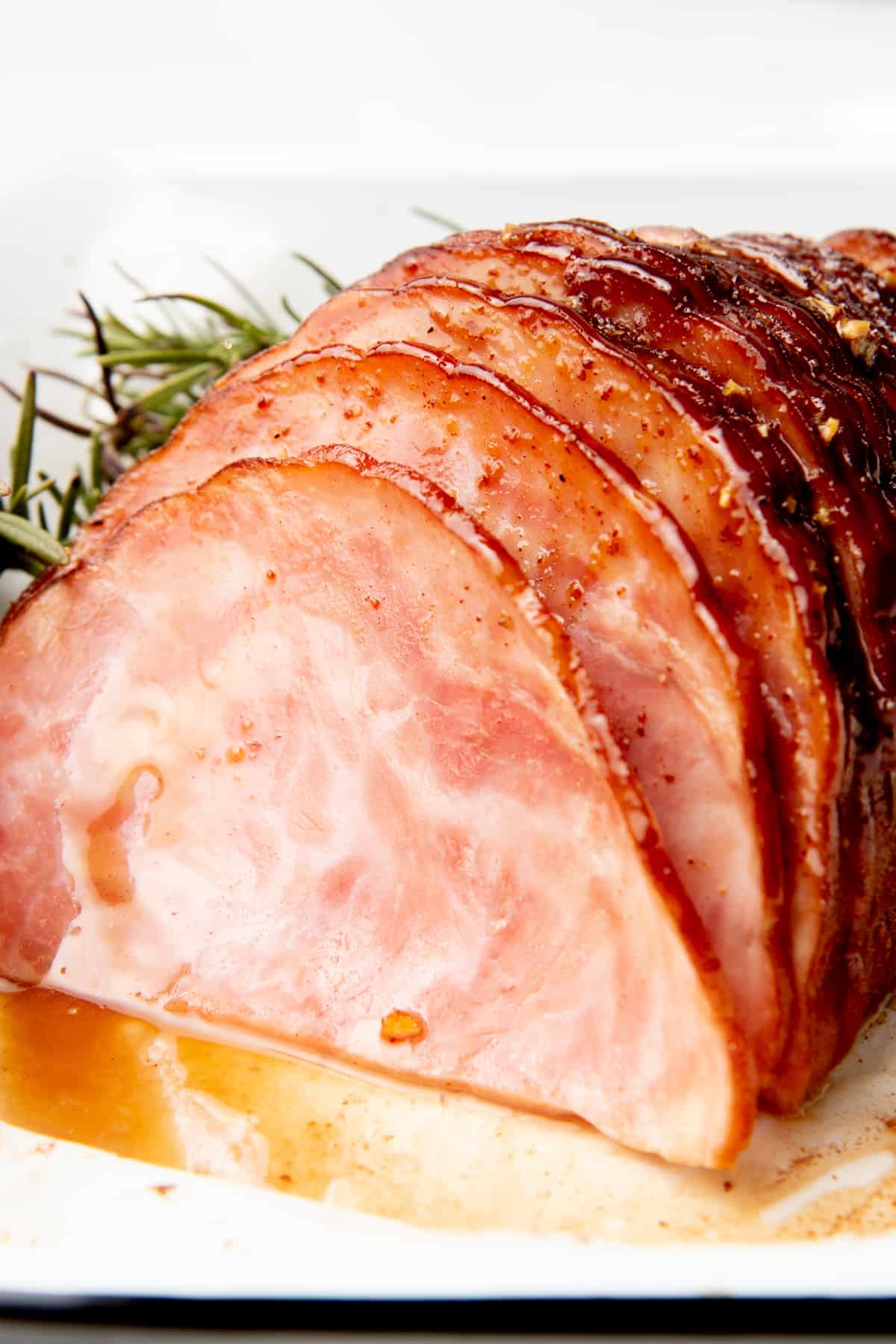 So how do I make Crockpot ham?

The great thing about slow cooker ham is that if you absolutely must serve turkey for all your holiday meals, this ham is so simple that you can make it for pretty much any meal. It doesn’t have to be a totally special holiday dinner. Heck, this is even fast enough prep time-wise to work for a weeknight dinner! And then you could have really amazing sandwiches for lunch at your desk the next day. Here’s how to make it:

Okay, but wouldn’t it be faster to just warm the ham up in the oven?

Yes, you can absolutely warm up a fully-cooked ham in the oven, and have dinner on the table in a shorter amount of time. But not only does the slow cooker keep the whole process so beautifully hands-off, it also keeps the ham from drying out. In the slow cooker, the ham is kept covered, and is cooked slowly at a low temperature. All this comes together to help retain moisture, so you end up with a juicy, delicious ham. 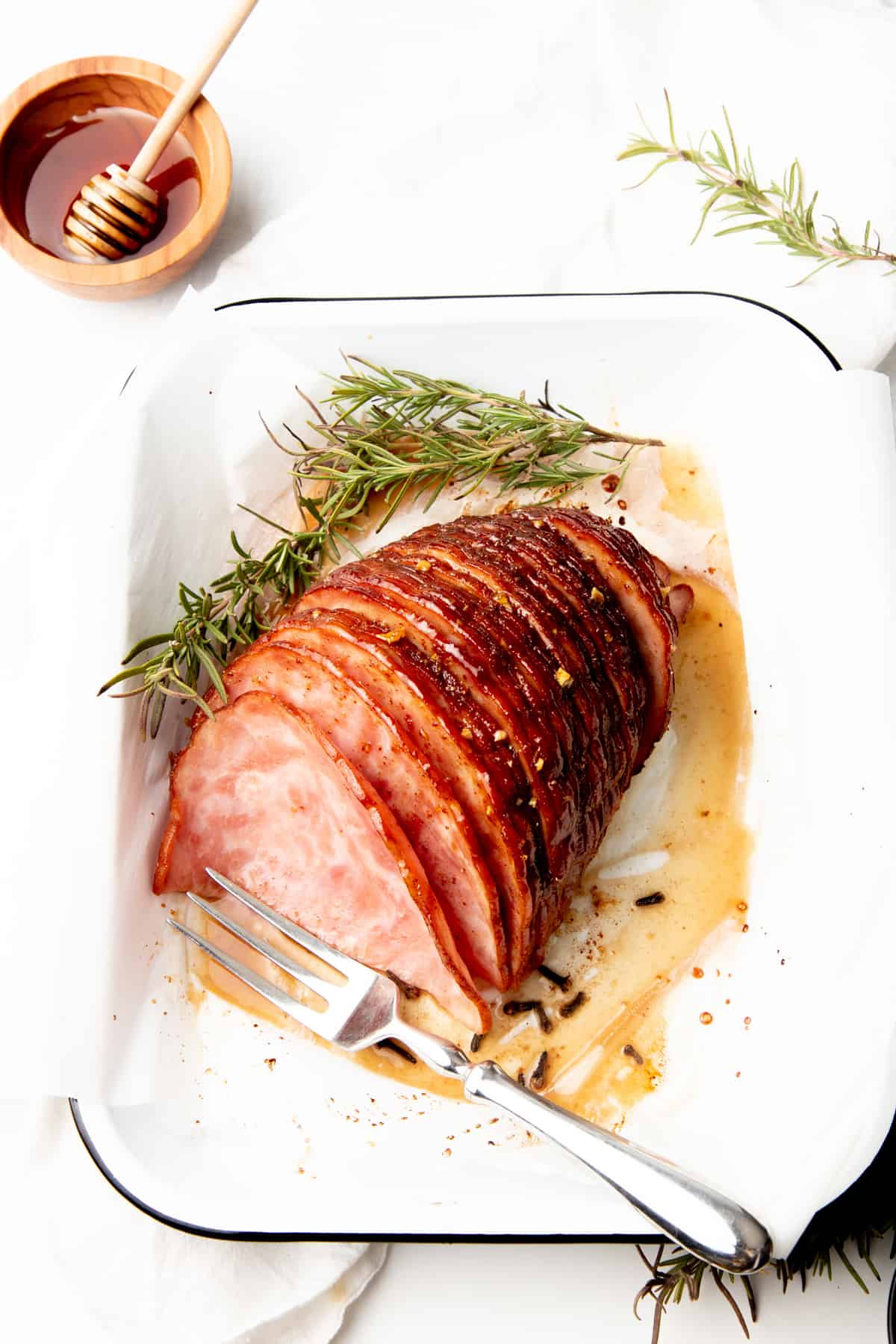 Is the glaze really necessary for this slow cooker ham recipe?

You could just cook the ham in the slow cooker in the honey mustard mixture, serve it, and call it there. It would be delicious! But I like to go the extra step and simmer down the cooking liquid and juices, glaze the ham, and then put it in the oven for a quick trip under the broiler. It gives it that glossy, glazed, sticky, delicious coating that is pretty much the thing dreams are made of. 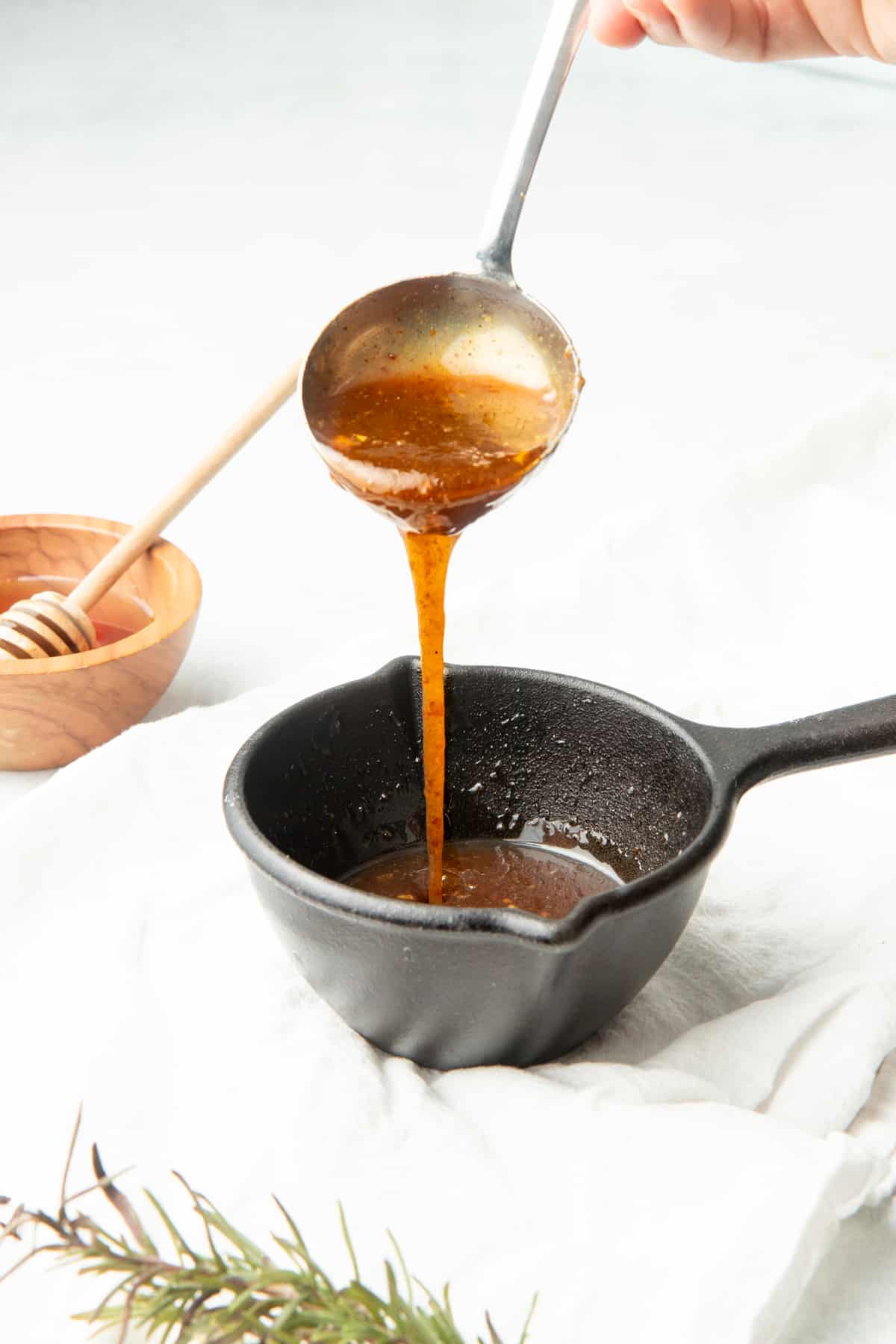 How do I reheat the leftovers?

Unless you’re having a huge gathering, you’re bound to have some leftover ham. You can certainly eat it cold, but if you want to heat it up, you have two options. For heating up just one or two servings, you can warm up individual pieces in a skillet over medium heat. To warm a larger batch of slices, place the ham in a baking pan, add ½ cup of water, and cover with foil. Heat in a 350°F oven for 15 minutes.

Warm or cold, you can use your leftover ham in sandwiches or salads, serve it for breakfast, or stir it into soups. 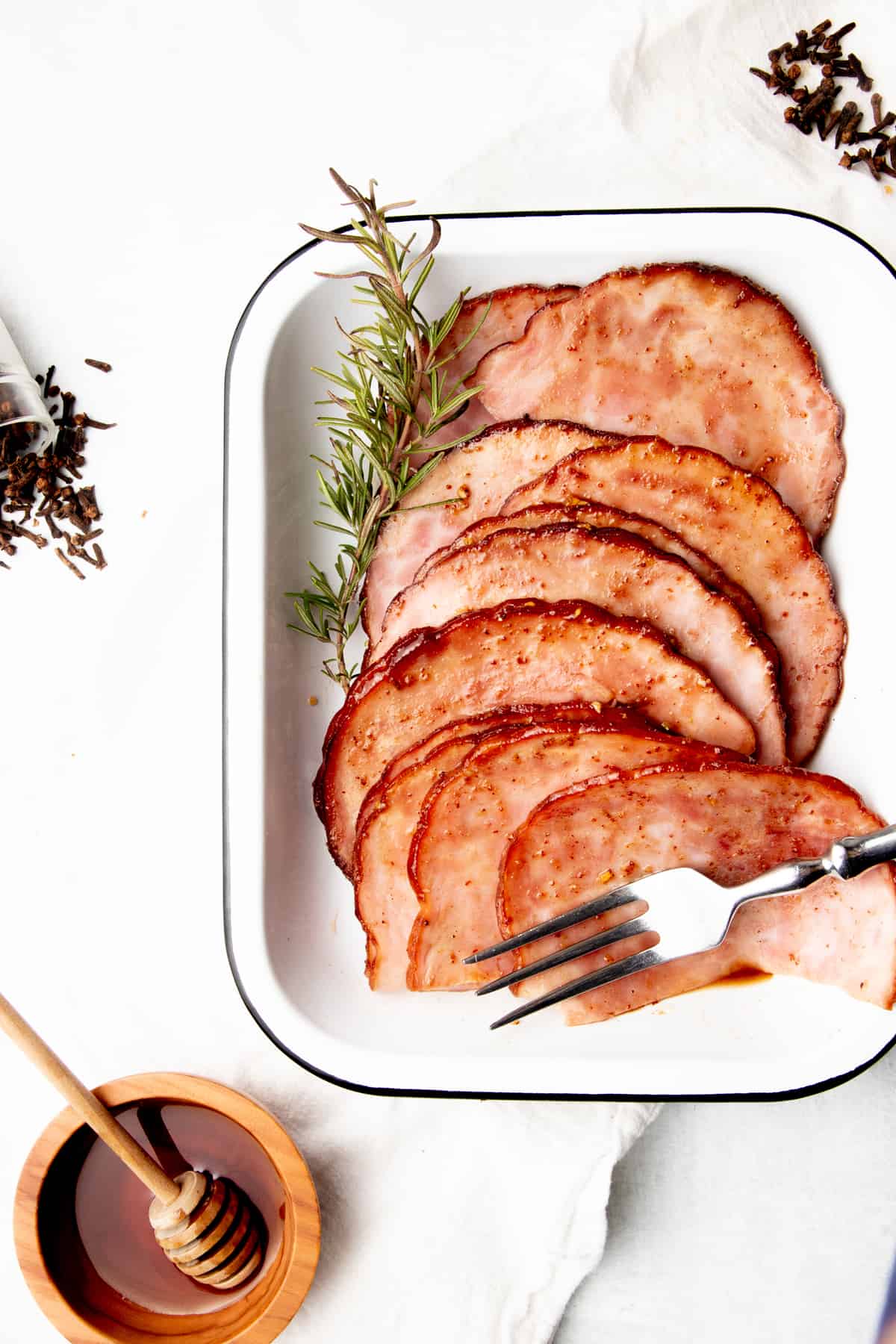 What should I serve with slow cooker ham?

I typically make this Crock Pot ham recipe in the colder parts of the year, so I like to serve it with side dishes that are either 1) comfort food, or 2) made with fall or winter produce. If you have access to a second slow cooker, serve this ham alongside some mashed potatoes. Yeast rolls are a classic option (don’t be scared—cooking with yeast isn’t that hard!), or you can try something different with some butternut squash basmati rice. To get some colorful produce on your plate, try a pomegranate persimmon salad, glazed beets, or cranberry applesauce.