Meal Plans →
Recipe At-A-Glance
...
Gluten-Free2 hours, 40 minutes
This glazed Christmas ham is sweet, spicy, and packed with warming flavor for the holidays. The whole family will be asking for seconds.
Jump Directly to Recipe 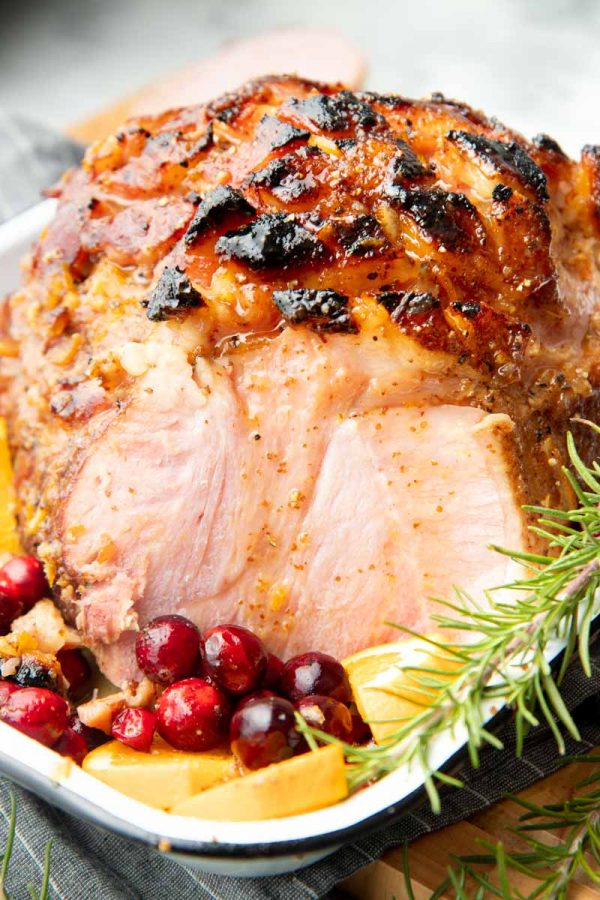 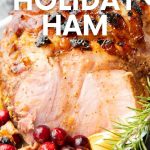 Ham is one of the easiest main dishes you can make for the holidays—if you can warm up a frozen pizza in the oven, you can cook a perfect ham for Christmas!

Our Christmas ham recipe is slathered with a mouthwatering orange-bourbon glaze that elevates this classic dish to something truly special. We’ll step you through the entire process for rocking this bourbon glazed ham recipe. Let’s get cooking! 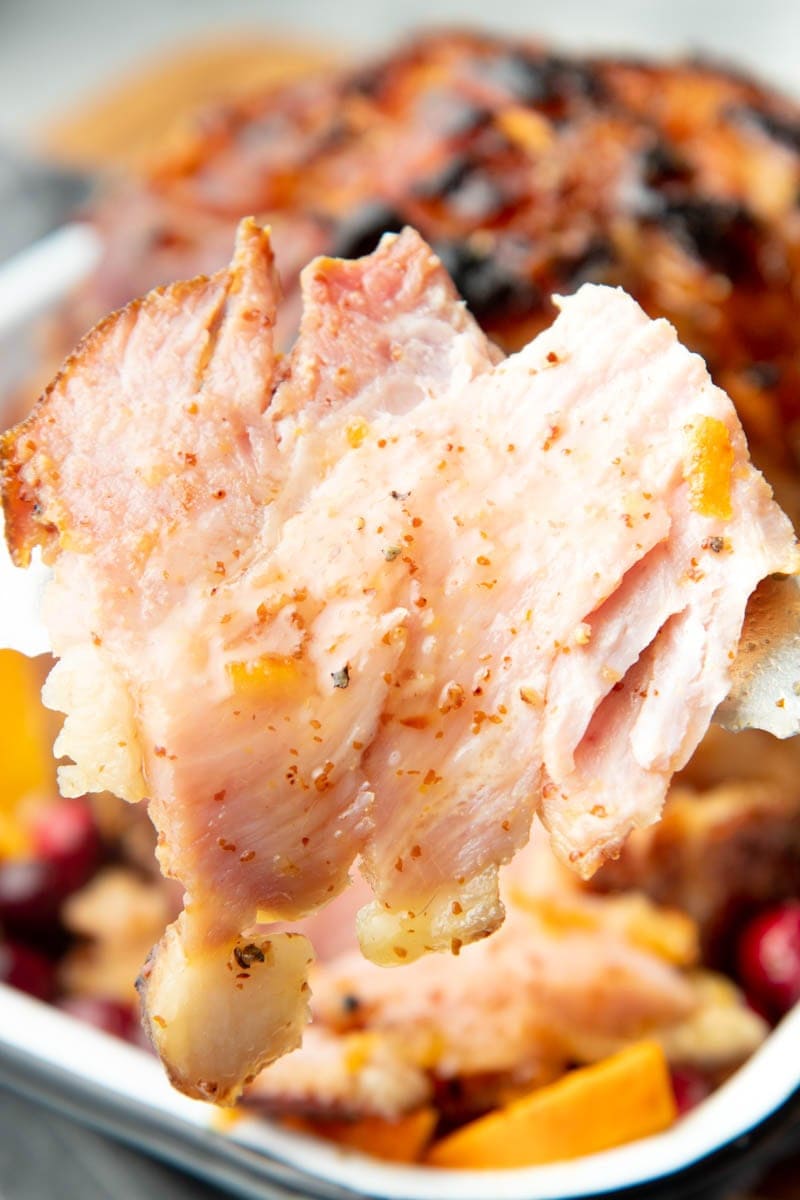 What do I need to make this Christmas ham?

This traditional ham recipe is as simple as it is delicious. The secret to this delicious holiday ham is our sweet and savory glaze. You only need a handful of ingredients to get this ham going! 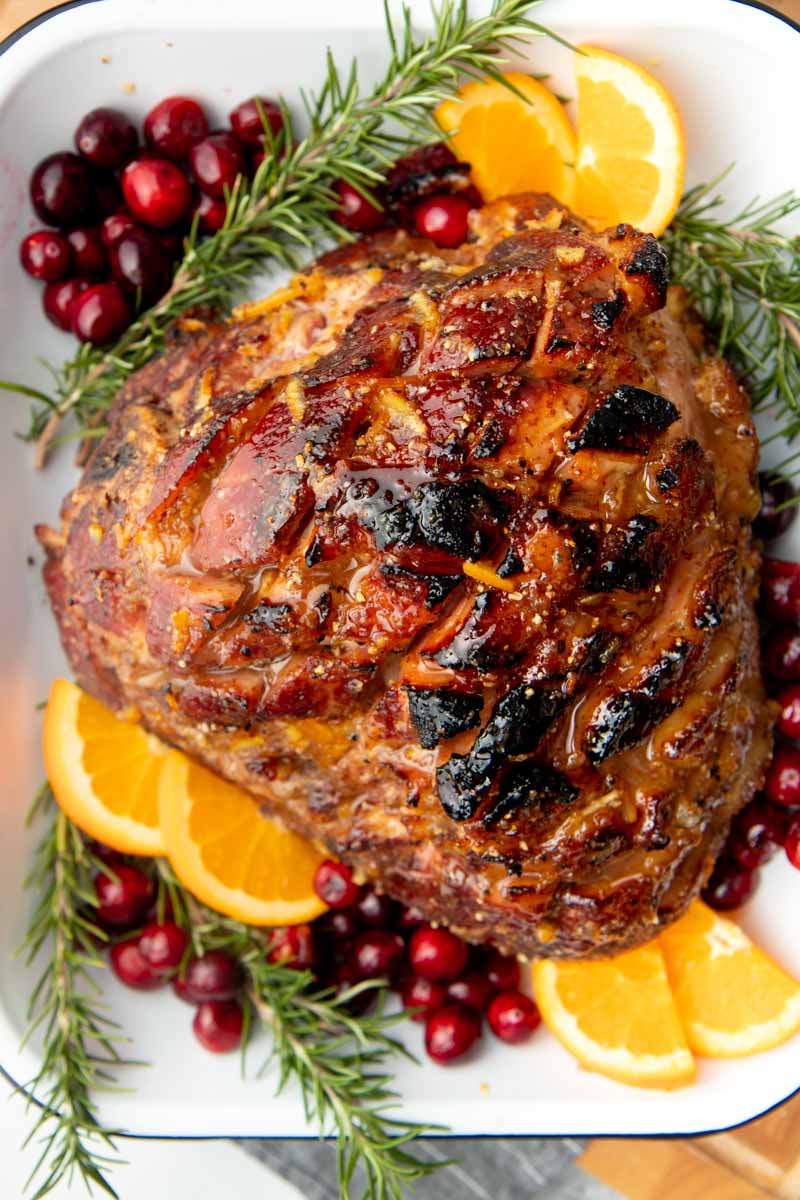 What kind of bourbon should I use?

You can use any type of bourbon that you want, although we will say this isn’t the place to use your highest quality stuff. Save that for sipping, and instead use a medium-quality bourbon here. Trust us, you won’t taste the difference!

Is there a substitute for bourbon?

Bourbon is one of the most complex tasting alcohols. So many factors play into what type of flavor profile it’ll end up with, and this can make it difficult to swap out in a recipe. Thankfully, ham pairs well with other alcohols, including brandy, rum, whiskey, and dark beer. These can be substituted equally for bourbon to lend a similar sweetness to your Christmas ham glaze.

What if I don’t want to use alcohol? Is there a non-alcoholic substitute for bourbon?

No worries if you aren’t into this bourbon glazed ham! Just check out our Honey-Glazed Ham recipe instead, which is alcohol-free. 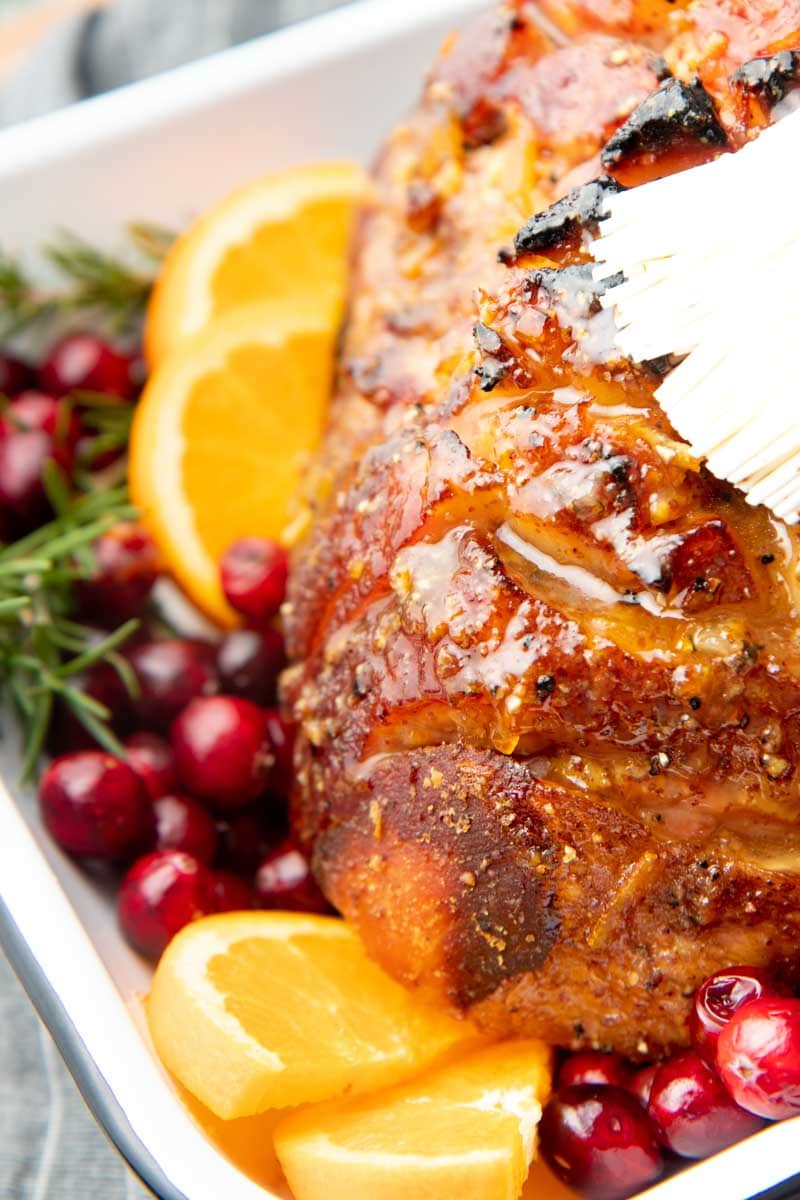 Does my ham have to be pre-cooked?

Almost all hams that you buy in the grocery store are pre-cooked. A baked ham takes less time to prepare and cook since the hard work has already been done for you. All you’re really doing with a pre-cooked smoked ham is heating it up and allowing the flavors of your bourbon glaze to sink in for the best holiday ham.

If you happen to get your hands on a fresh ham (typically you would get this directly from a farmer), this recipe isn’t the recipe for that cut of meat. Instead, try our Maple-Mustard Glazed Pork Roast.

Bring your ham out of the fridge and let it sit on the counter at room temperature for one to two hours before you begin cooking. This will allow your ham to cook more evenly when placed in the oven, resulting in a juicy ham throughout with no dry bits.

Can I use a boneless ham instead?

I’d recommend sticking with a bone-in ham in this recipe. You can’t beat the delicious flavor the bone adds when cooking your dish. It helps retain moisture, leaving you with a mouth-wateringly moist Christmas ham! The bone is also great for adding flavor to soups and other dishes long after your bourbon glazed ham has been gobbled up.

However, if you’re looking for an easy and delicious recipe for boneless ham, you’ll love my slow cooker honey-glazed ham. 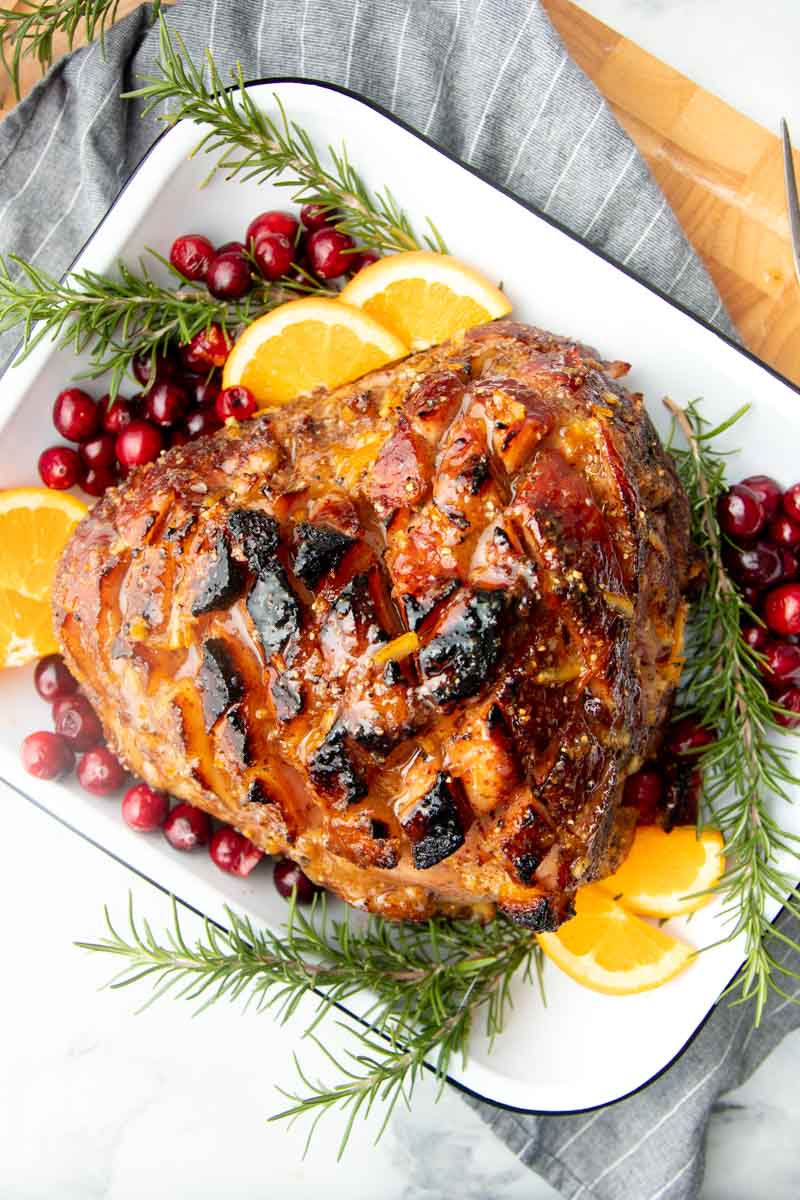 Do I need a spiral ham?

You don’t need one, but it can be helpful! Spiral cut hams allow for easier cutting, especially when you have a bone-in ham. The other benefit to a spiral sliced ham is that it offers spaces for your glaze to slide into, allowing the glaze’s flavors to infuse your whole ham.

In this Christmas ham recipe, you score the outside of your ham, which accomplishes the same thing. Spiral sliced hams tend to be more expensive, so it all comes down to personal preference. Both types of ham will work in this recipe.

If you do choose to use a spiral ham, reduce the cooking time slightly to keep the ham slices from dying out.

How large of a ham will I need?

As a rule of thumb, you’ll need approximately ¾ of a pound of bone-in ham for every person you’ll be serving. So for a smaller, more intimate gathering, you could get away with a ham that’s only five pounds and still feed six people comfortably. If you’re planning a larger get-together—say 12 guests— you should aim for a ham that’s roughly nine pounds.

What do I do with the ham bone?

Don’t throw out that bone! It can be used to add flavor to a variety of recipes. If you can’t use it right away, just toss it in your freezer until you’re ready to cook with it. You can then use it in soups, stews, and ham and bean soup to bring a smoky ham flavor to your dishes. 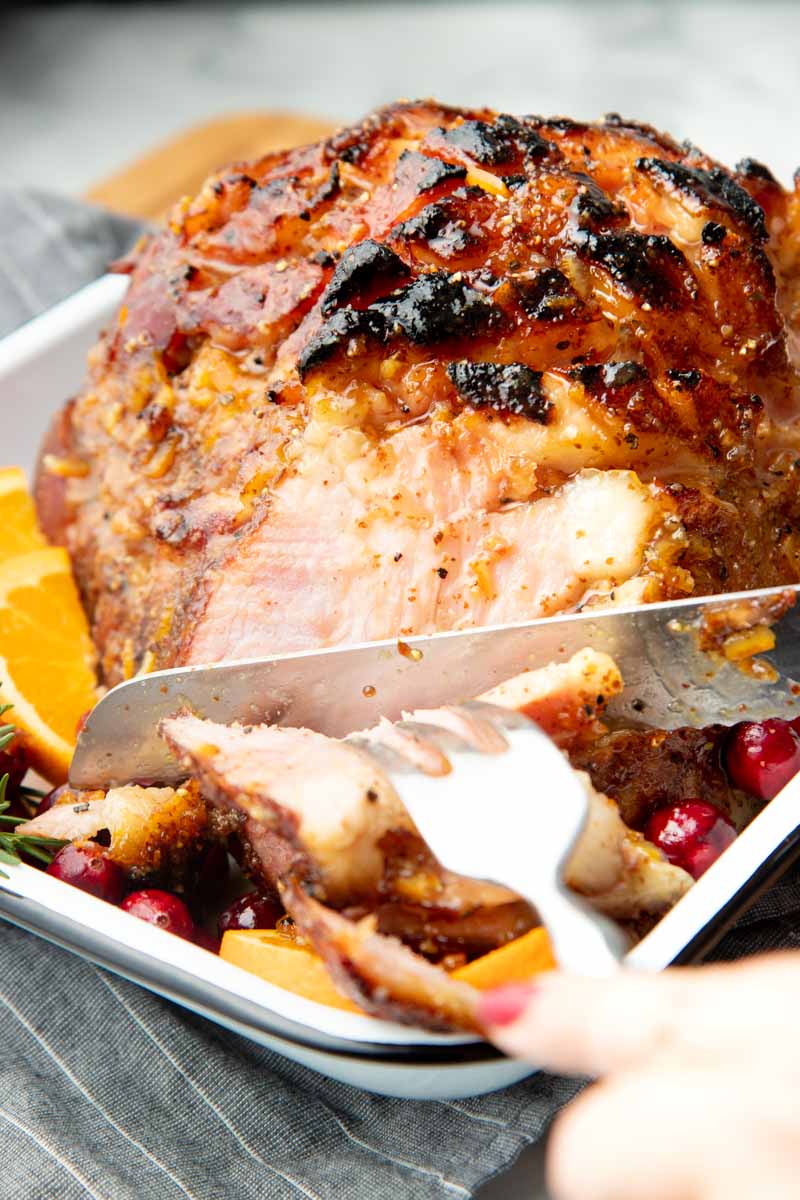 What should I serve with my Christmas ham?

I wrote a whole post that’s jam-packed with Christmas dinner ideas. It has everything from vegan dishes to appetizers to sides. There are tons of delicious options in that post that will pair well with your Christmas ham main dish. In fact, you’re bound to find enough tasty ideas for multiple holiday dinners!

How do I properly store my ham?

After purchasing your ham from the store, you can safely store a whole ham in the fridge for as long as listed in the “best by” date on the packaging. Make sure you keep it in the original packaging.

After cooking, place your leftover ham in an airtight container in the fridge. It should be eaten within five days, which shouldn’t be a problem, since this is the best Christmas ham recipe you’re going to find! 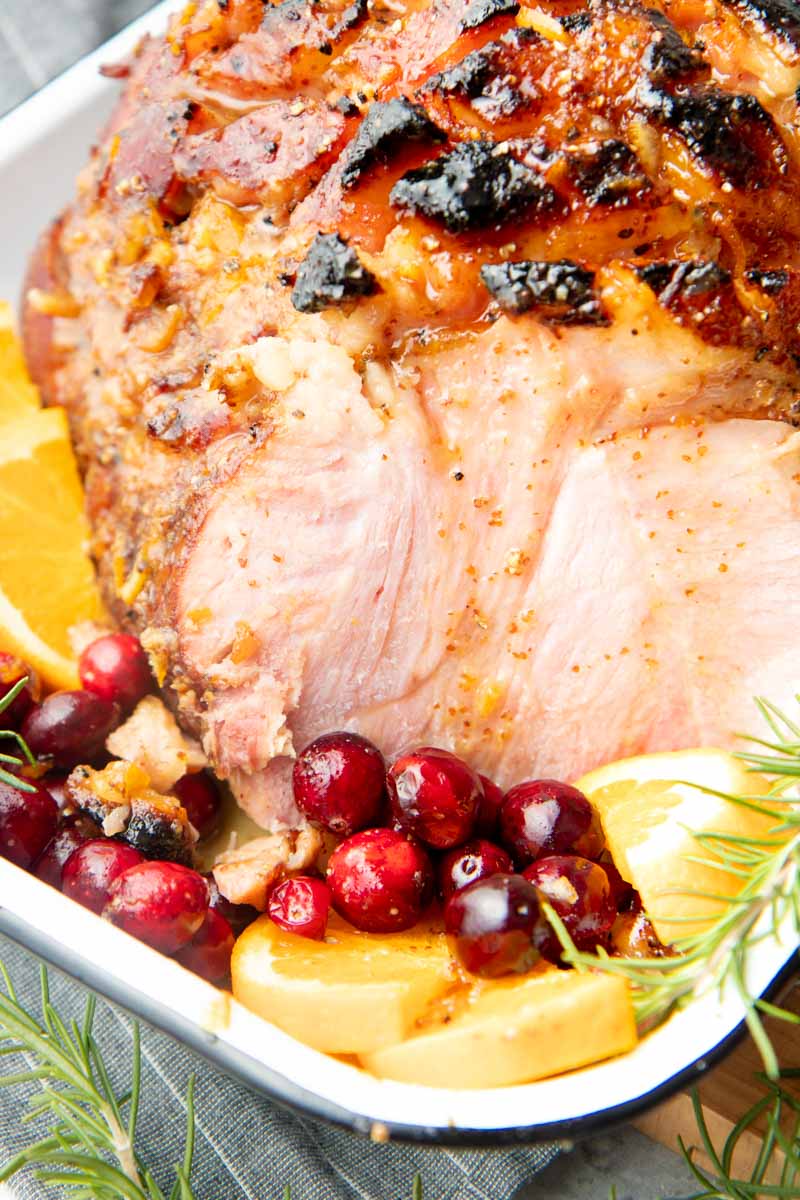 Can my Christmas ham leftovers be frozen?

Yes! You can freeze your ham leftovers for one to two months and still have flavorful, moist ham. After that, it will still be safe to eat, but the quality may decline. To prevent freezer burn, make sure that your ham leftovers are stored in airtight freezer-safe containers.