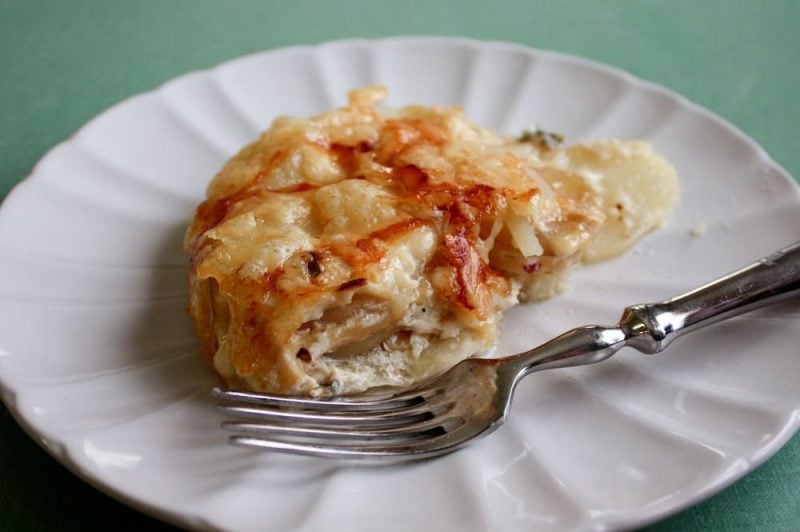 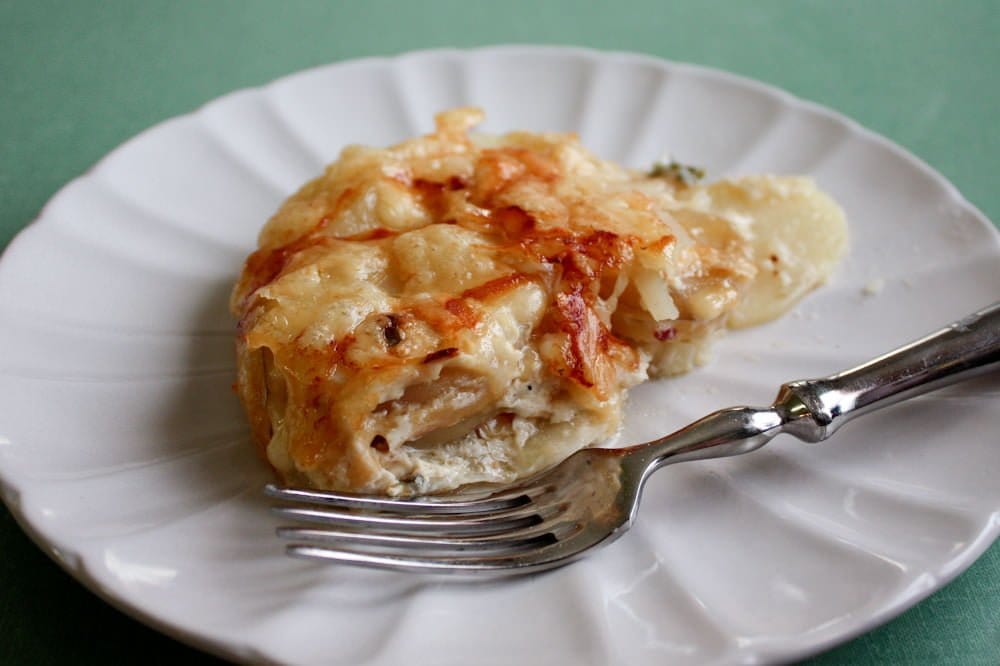 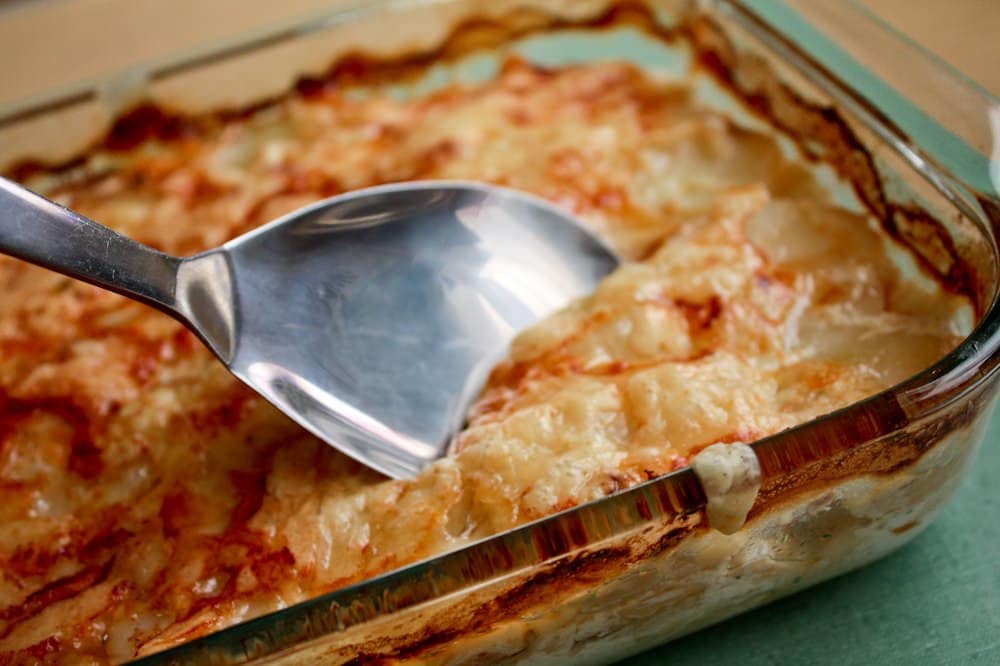 In the later decades of the last millennium, convenience foods were big business (and still are). Most households were switching from the previously standard stay-at-home mom model to dual-income, go-go-go lifestyle that embraced any product that freed up of a spare second of time. 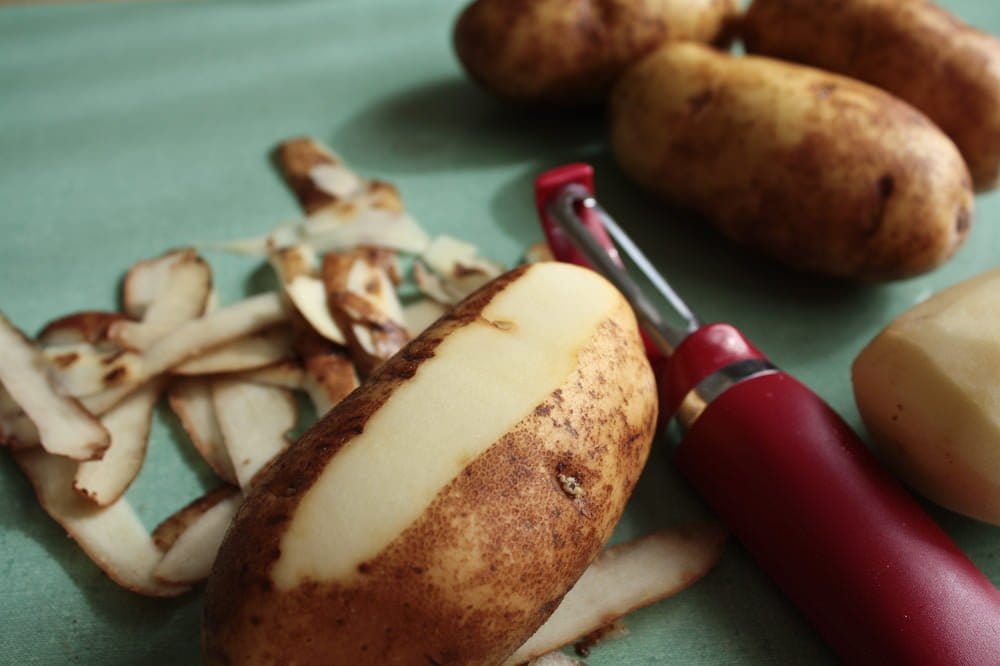 I’m not exactly sure which year scalloped potato “mix” showed up on store shelves, but I do know that the sheer variety of flavors and styles indicates that there must still be a big market for the product. 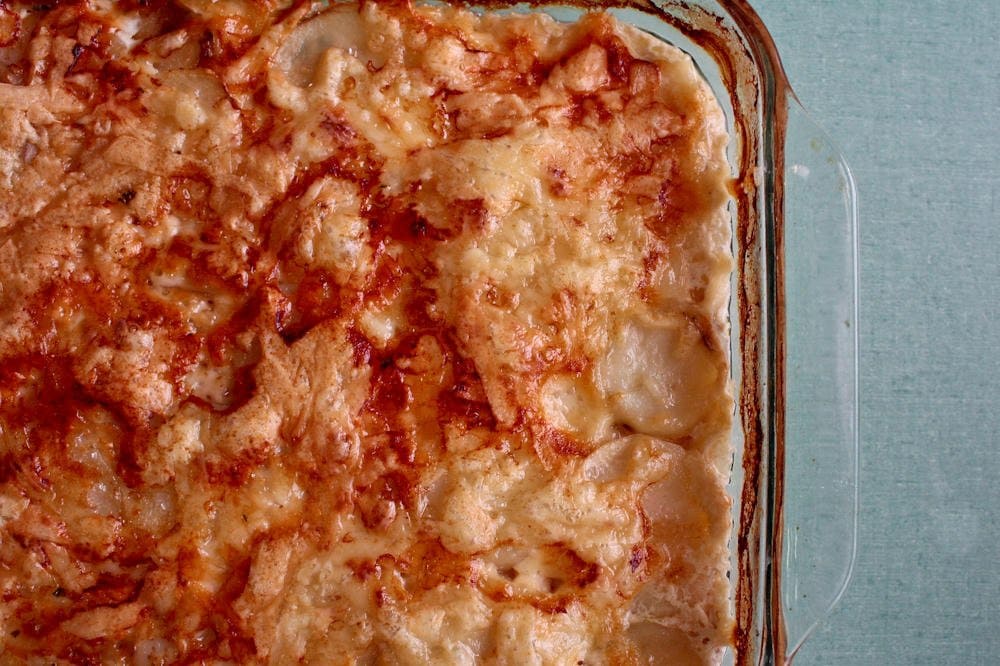 I get it though. For us “convenience-food natives” it is ingrained in us that if a box mix exists, it must mean that the from-scratch version of the dish is punishingly difficult and time-consuming.

I mean, if it wasn’t why would they offer boxed mixes? 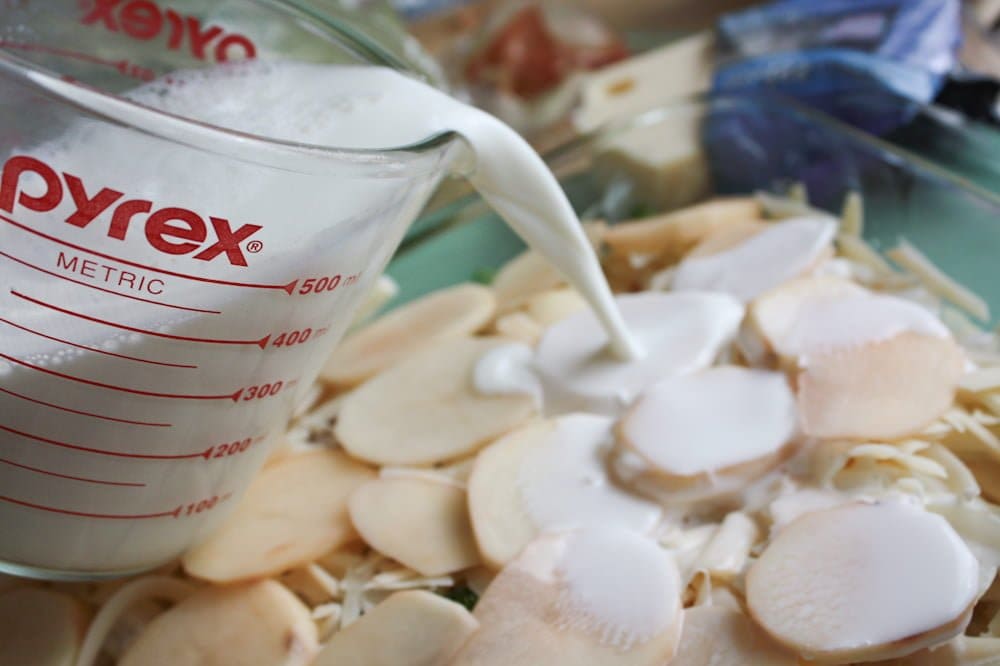 Because they are jerks. That hate cheese. And flowers. And puppies. 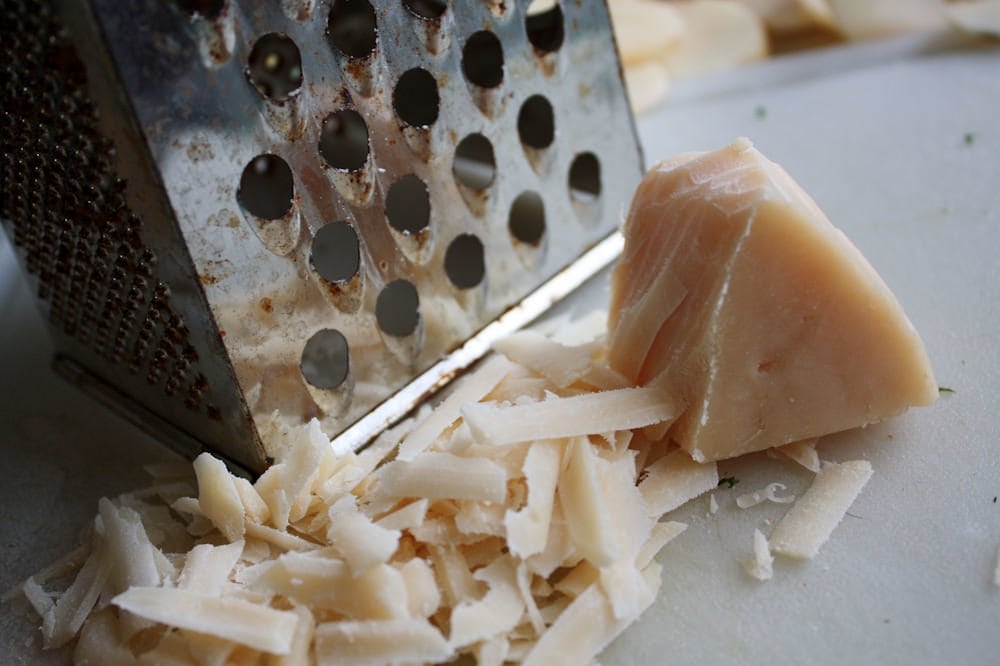 As I’ve tumbled along my culinary journey, I’m starting to realize more and more how many processed foods are just flat-out silly. But growing up in the age I did, I didn’t really know any different. It’s fun to think about food differently. 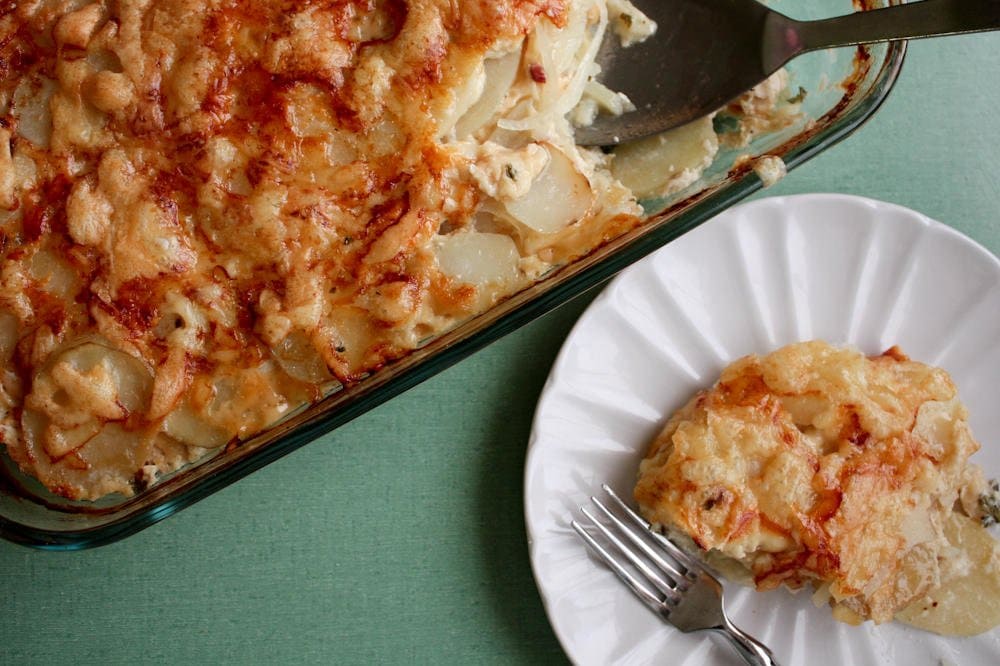 While scalloped potatoes are decidedly time-consuming (mine took about two hours, including 90 minutes of cooking time), there is nothing hard about them. In fact, other than the slicing, I think this would be a great dish to have kids help with! 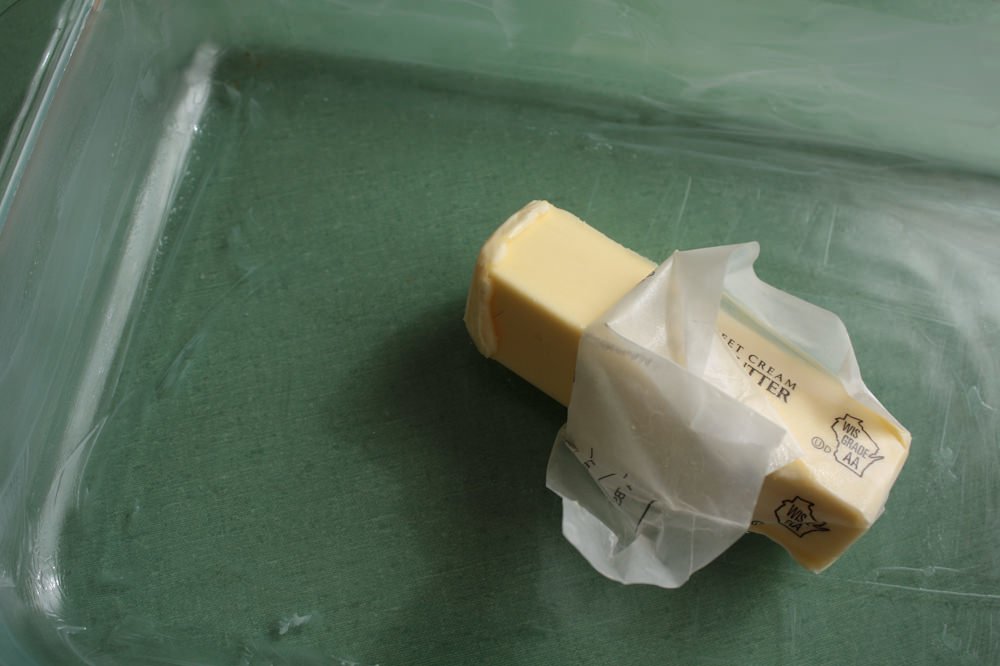 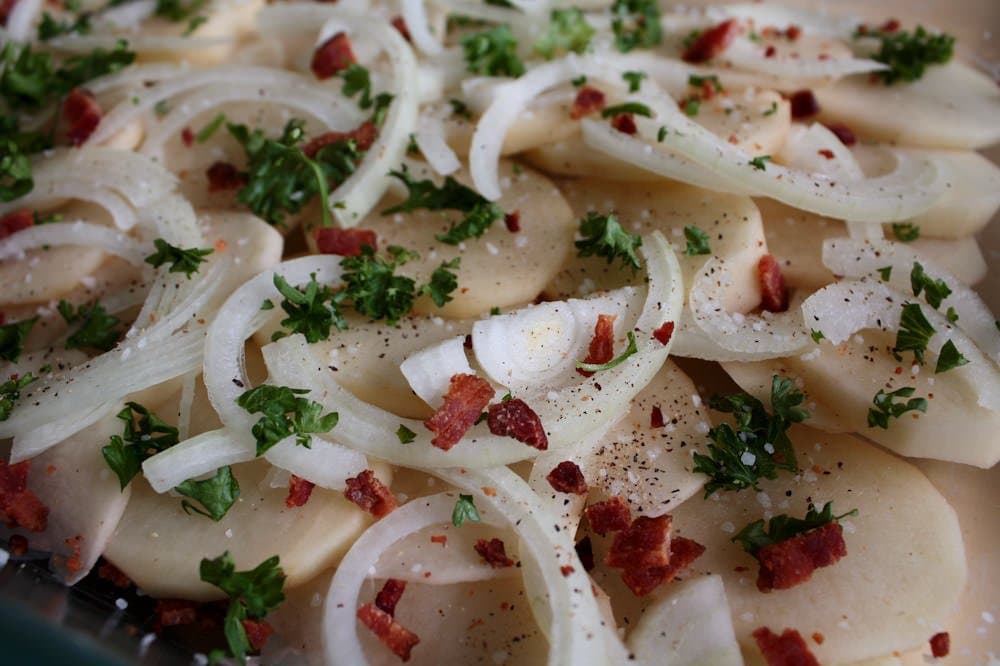 These are fabulous as a side for pork. Which was the plan. Until I consumed so much of the potatoes themselves that I had no room for pork.

Obviously, they are also an excellent main course. 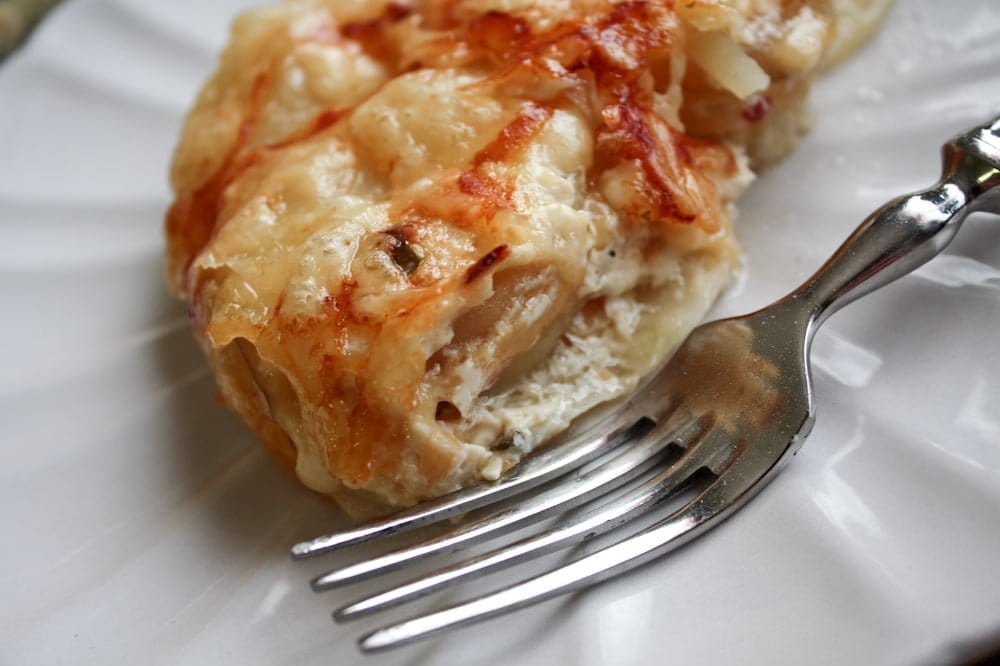 Preheat oven to 350°. Grease a 9 x 13 inch baking dish with butter. Layer 1/3 of the potatoes in the bottom, top with salt and pepper. Layer on top of that 1/2 of the onions, 1/2 of the parsley, 1/2 of the bacon, 1/3 of the Swiss and Parmesan cheese. Repeat layers. Top with the remainder of the potatoes. Mix half and half and milk together, pour over potatoes evenly, sprinkle butter pieces evenly over top. Cover with aluminum foil and bake for 50 minutes – 1 hour, or until the potatoes have absorbed most of the liquid. Remove foil, cover in remaining cheeses and bake for 20-30 more minutes, or until cheese is browned and all the liquid is absorbed. 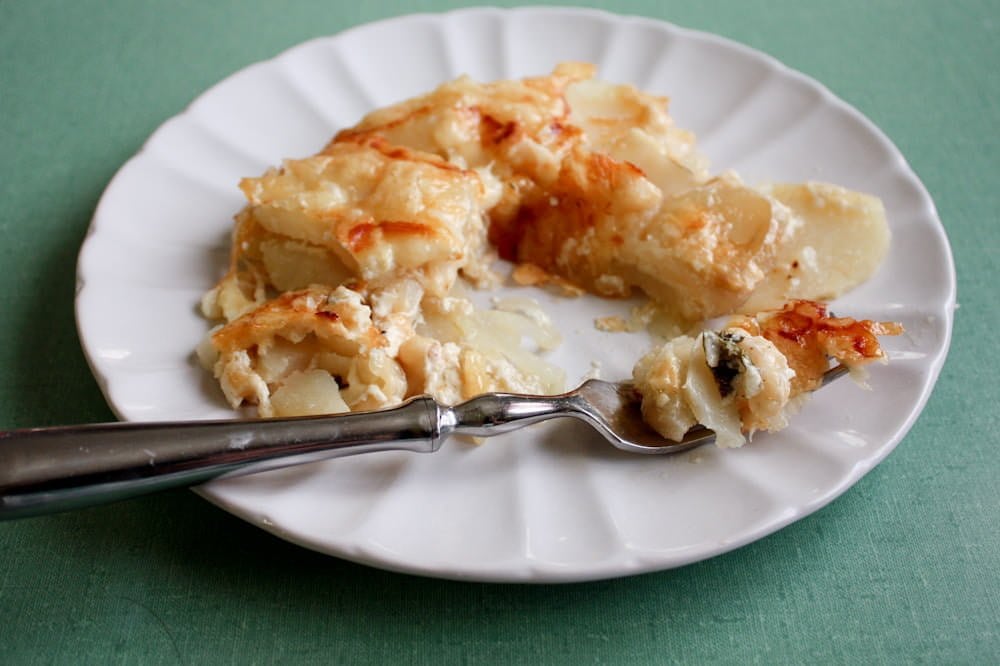