I realize that Brussel sprouts are so universally hated they’ve become a cliché that sitcoms use to torture kids at the dinner table. But don’t believe the negative hype—I promise I can make you like Brussels sprouts. Even if you’ve tried them before and thought they were not-so-delicious, please read on, I have faith in your relationship with sprouts!

There are two big reasons why most folks say they don’t like Brussels sprouts—mushiness and stinkiness—and both of those issues come from improper cooking. That’s not the way good Brussels sprouts should taste! 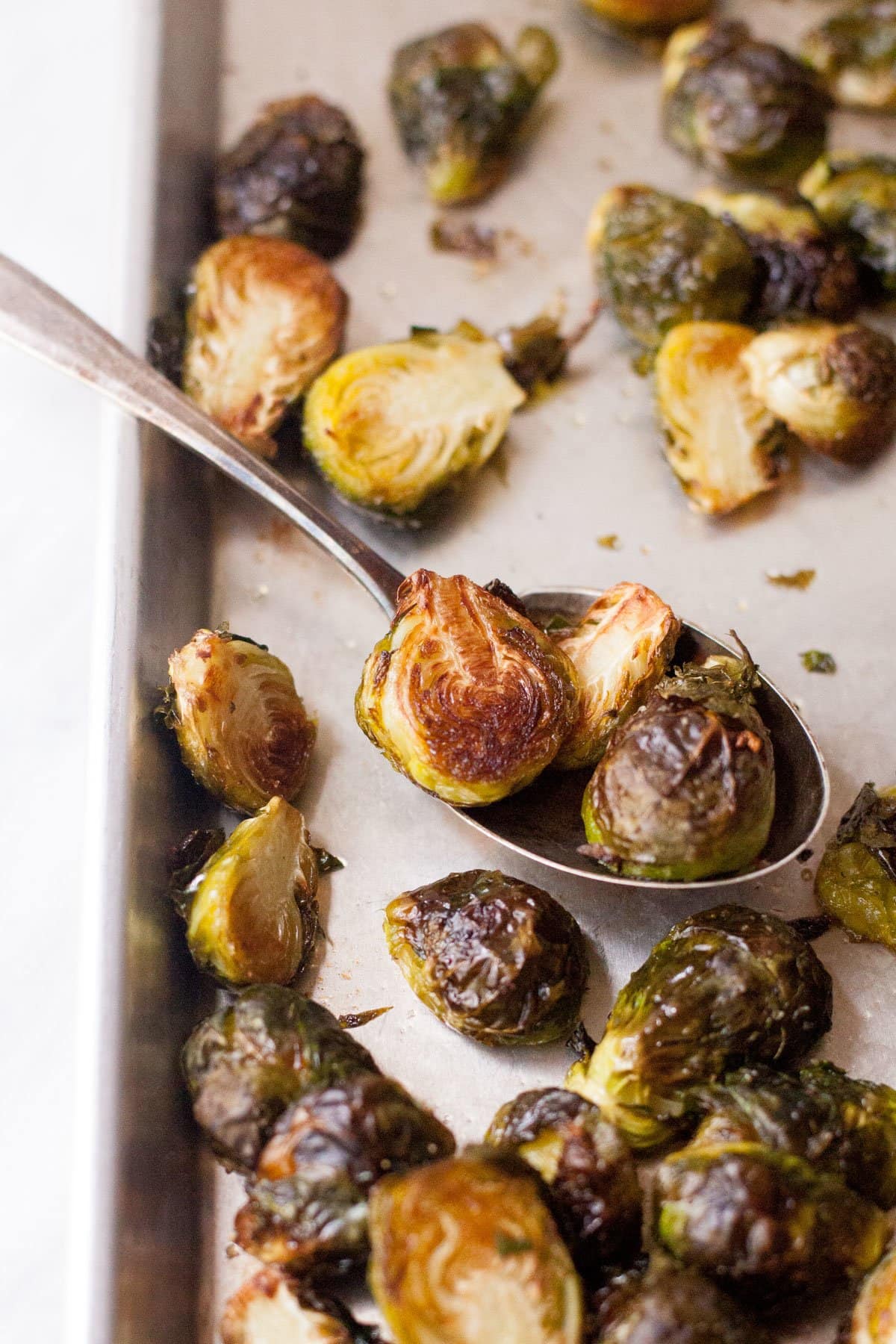 Not all Brussels sprouts are the same. For the sweetest, mildest flavor, you’re looking for sprouts with tight, compact, bright green leaves. If the leaves have started to open up or turn brown, your sprouts are older and will be even more sulphur-y when cooking. Brussels sprouts are excellent storage crops—they’ll store up to two months after being harvested—which means there is no rush for growers to get the sprouts to the grocery store. The sprouts you buy from your grocery store might be weeks or months old. 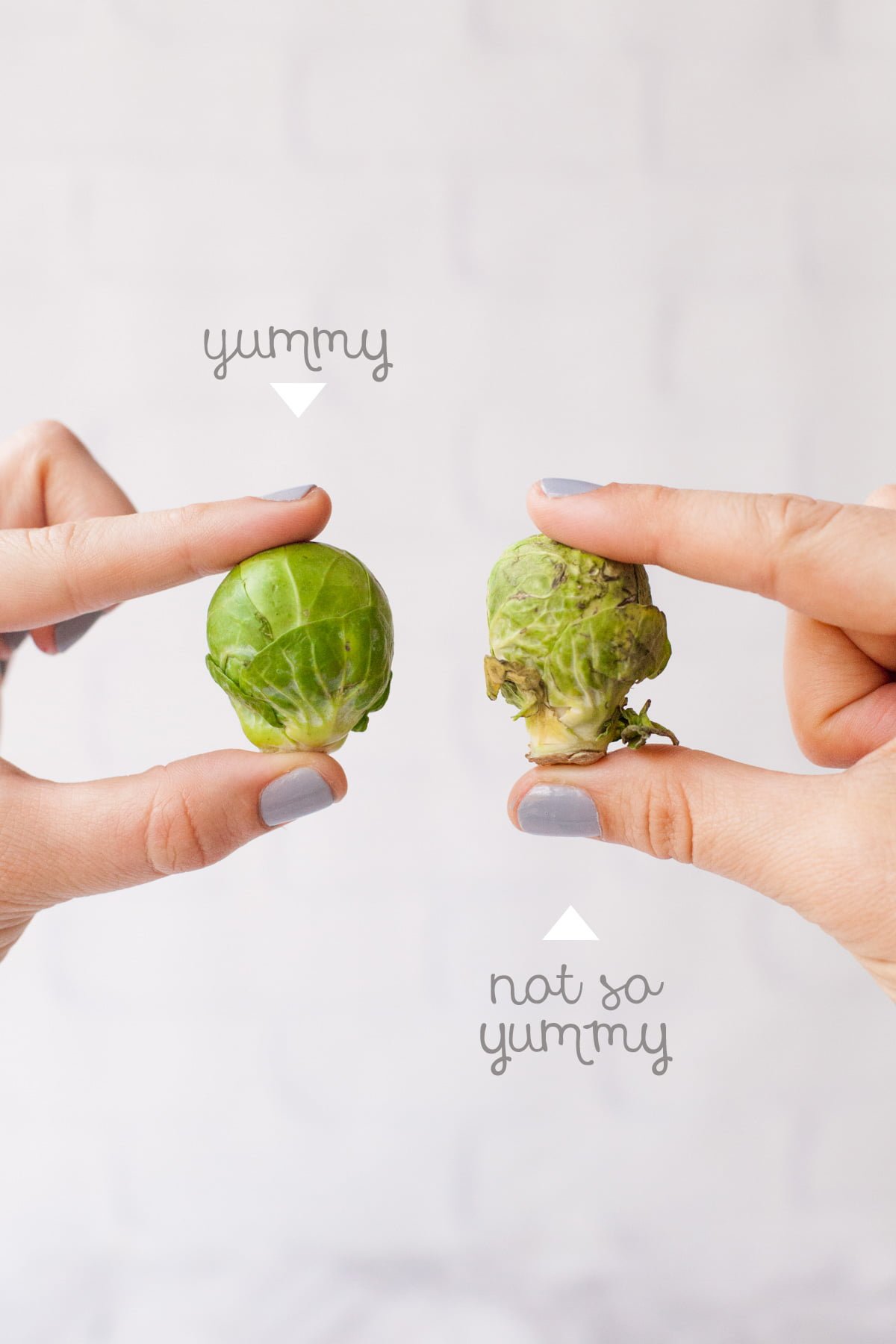 A fun hint about Brussels sprouts (and all brassica veggies—kale, cabbage, etc.) – they actually taste sweeter if they’ve been hit with a frost or freeze while still on the plant. This almost never happens with grocery store sprouts, but you can get these frost-kissed sprouts at your local farmer’s market. Just head there after the first frost and ask anyone selling Brussels sprouts if they were harvested after the frost. Trust me. The difference is worth the effort. You’ve never tasted Brussels sprouts until you’ve tasted some fresh ones that have been hit by a freeze.

And, if you have the space, Brussels sprouts are relatively easy to grow on your own. They are a long season crop—meaning you basically grow them from frost-to-frost—but it’s worth the wait.

Most store-bought Brussels will have the stem mostly trimmed off, but if you want to really make sure there aren’t any woody parts, take a sharp knife and just lop off the bottom of the sprout. 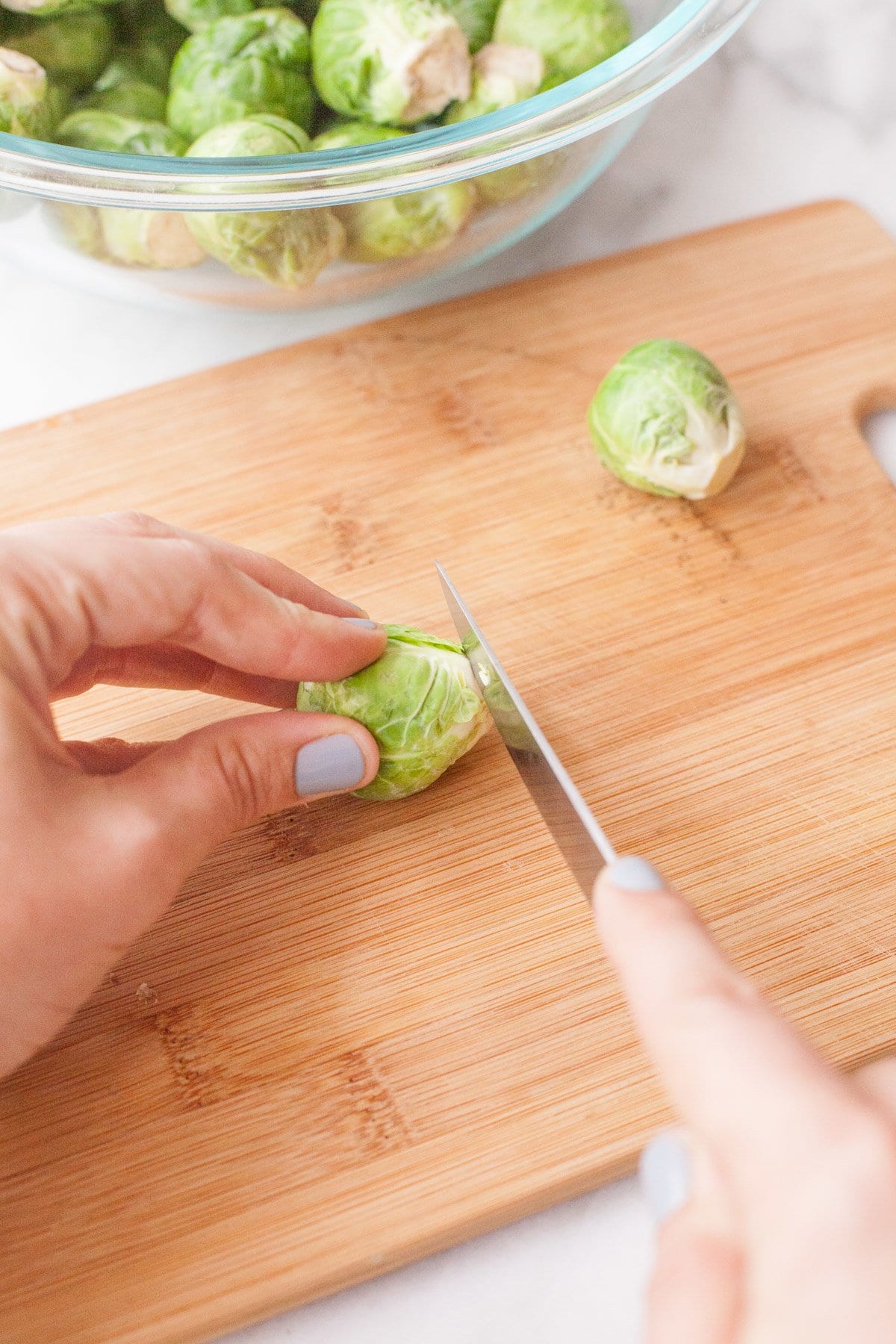 To make cooking time a little quicker (and thus avoid over-sulphuring up the place), I like to slice my sprouts in half. This has the added bonus of giving more surface area to brown, caramelize and get exponentially more delicious. 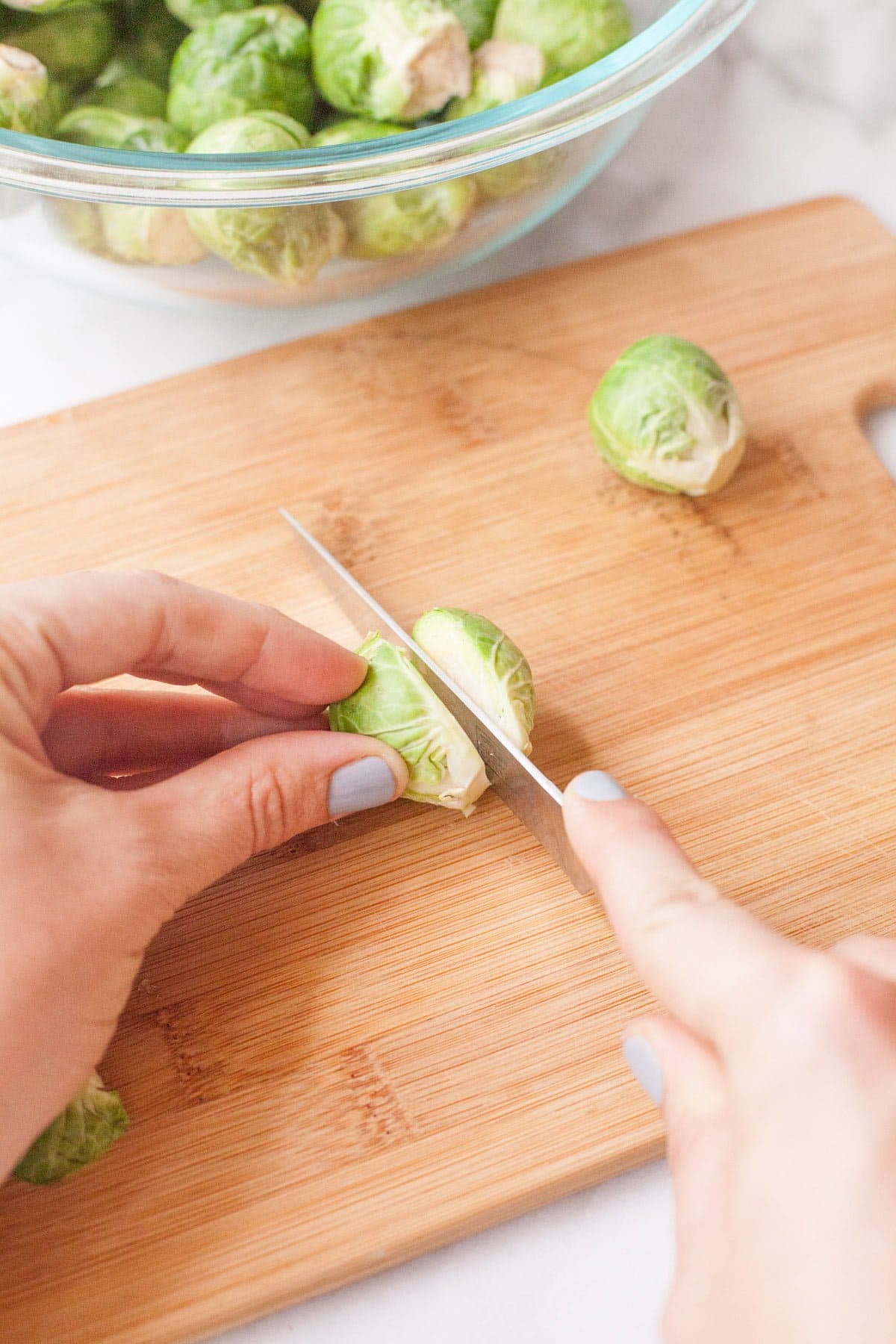 When you slice your sprouts in half, any loose leaves that tumble off should head straight to the compost—treat those like the outer leaves on a head of iceberg lettuce, just not good eats.

There are a lot of fun ways to flavor roasted Brussels sprouts, but most of the time, I’m a purist. I like olive oil (or avocado oil), sea salt, and freshly-cracked pepper. I toss my sprouts in a bowl with the oil—I use about two tablespoons per pound of sprouts—until they are all well-coated. 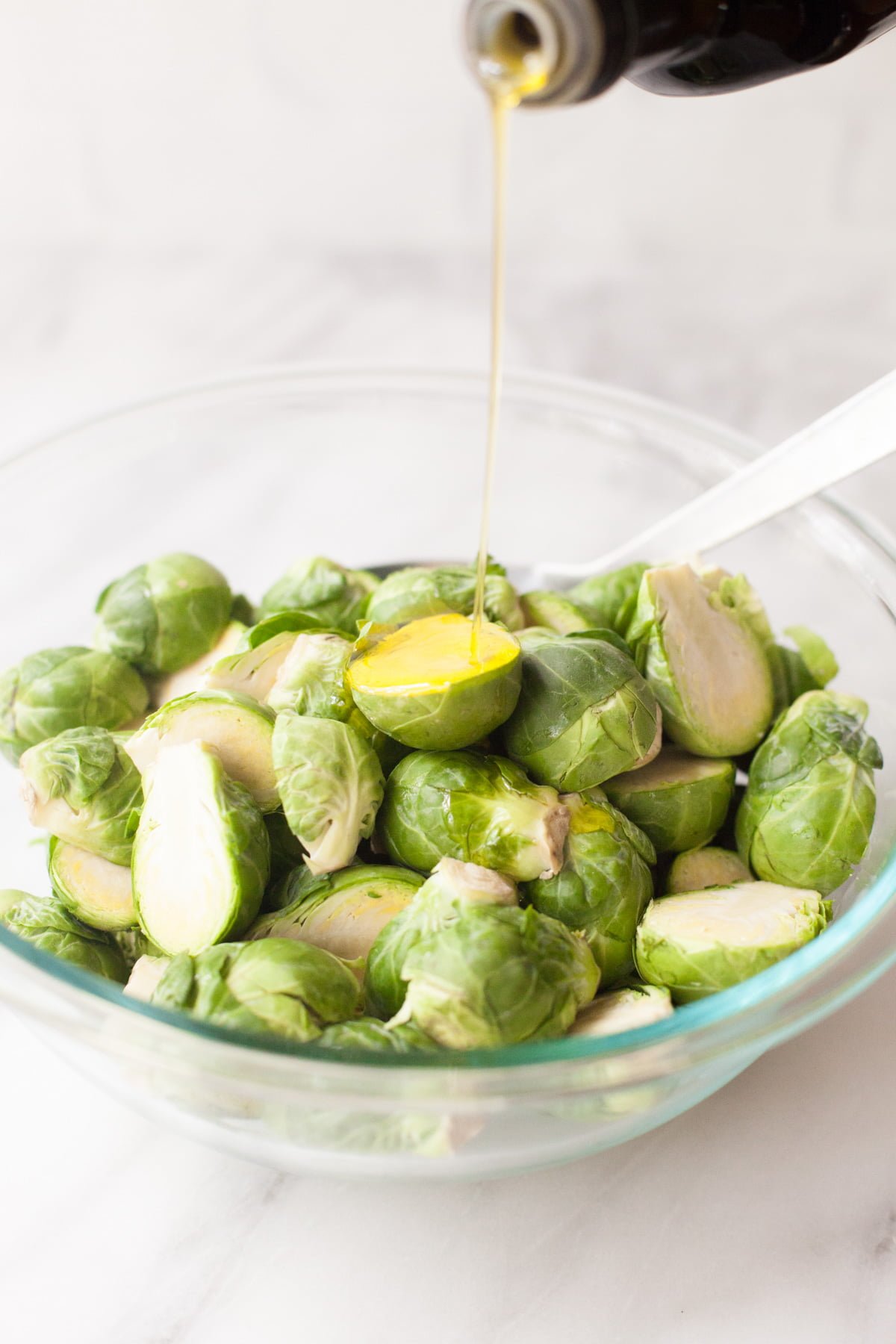 Then I spread the sprouts onto a baking sheet. Now, here is where a lot of folks make a mistake—don’t you dare crowd those sprouts! You want enough space around each sprout for air to circulate. If they’re packed in there, they won’t roast and get caramelized, they’ll steam. And you know what isn’t tasty? Steamed Brussels sprouts. Use two baking sheets if you have to. 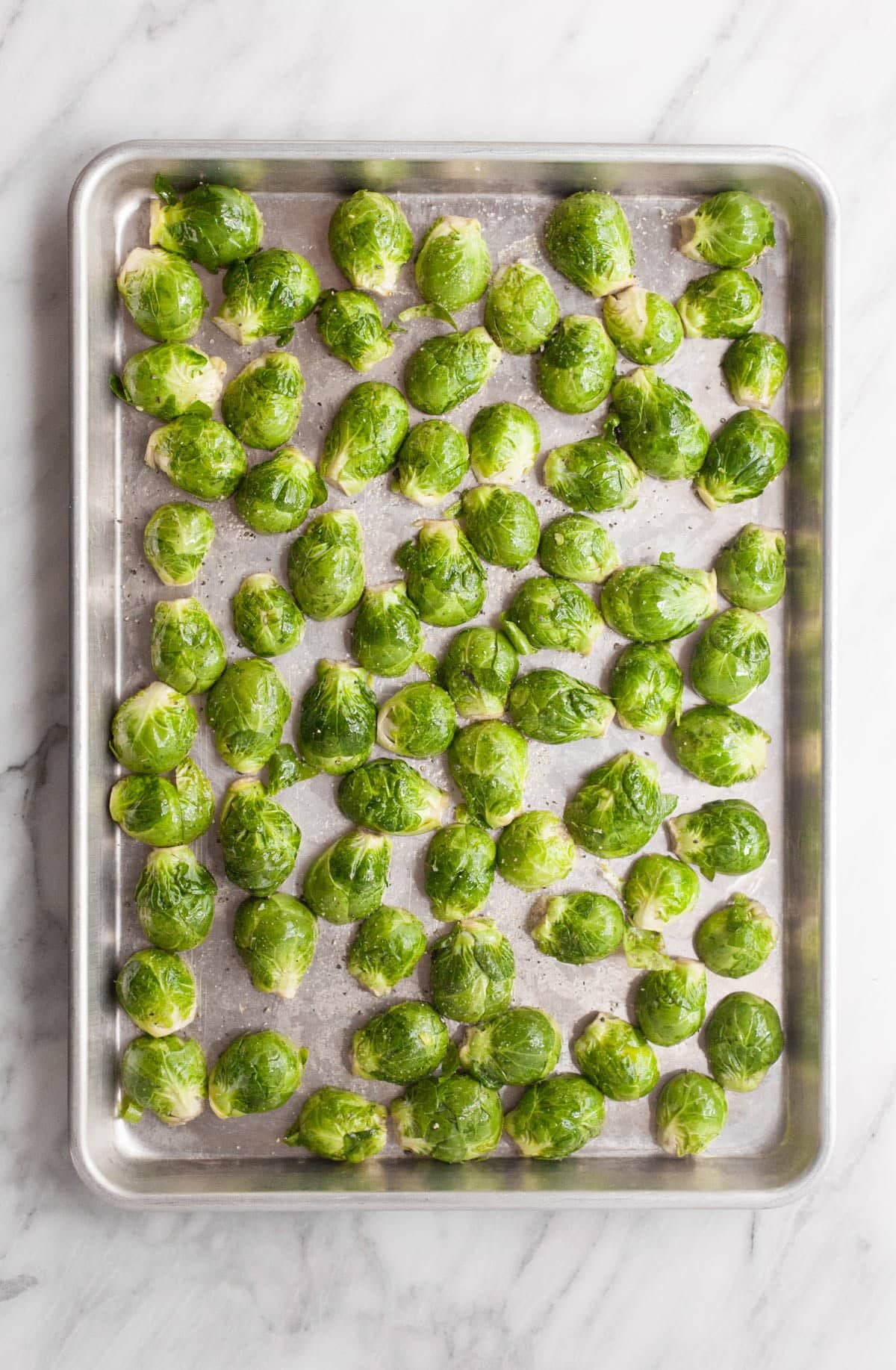 I also make sure the cut-sides of the sprouts are down on the baking sheet because I just tend to like the caramelizing on that side, but you really don’t have to be as uptight about it as I am. Then, once the sprouts are adequately spread out, I give them a sprinkle of salt and pepper.

I’ve tried roasting sprouts on parchment paper and baking mats, and while I love the easy clean-up factor of those, neither of them give me the same awesome results as just roasting the sprouts directly on my baking sheet.

Another mistake folks make when roasting veggies (any veggies)? Using too low of an oven temperature. You want that baby hot, hot, hot. Lower temperatures do a great job of softening and cooking vegetables without caramelizing. Higher temps bring out those sugars and help the sprouts cook more quickly (again, to avoid the activation of too much sulphur). I roast my veggies at 450°F. 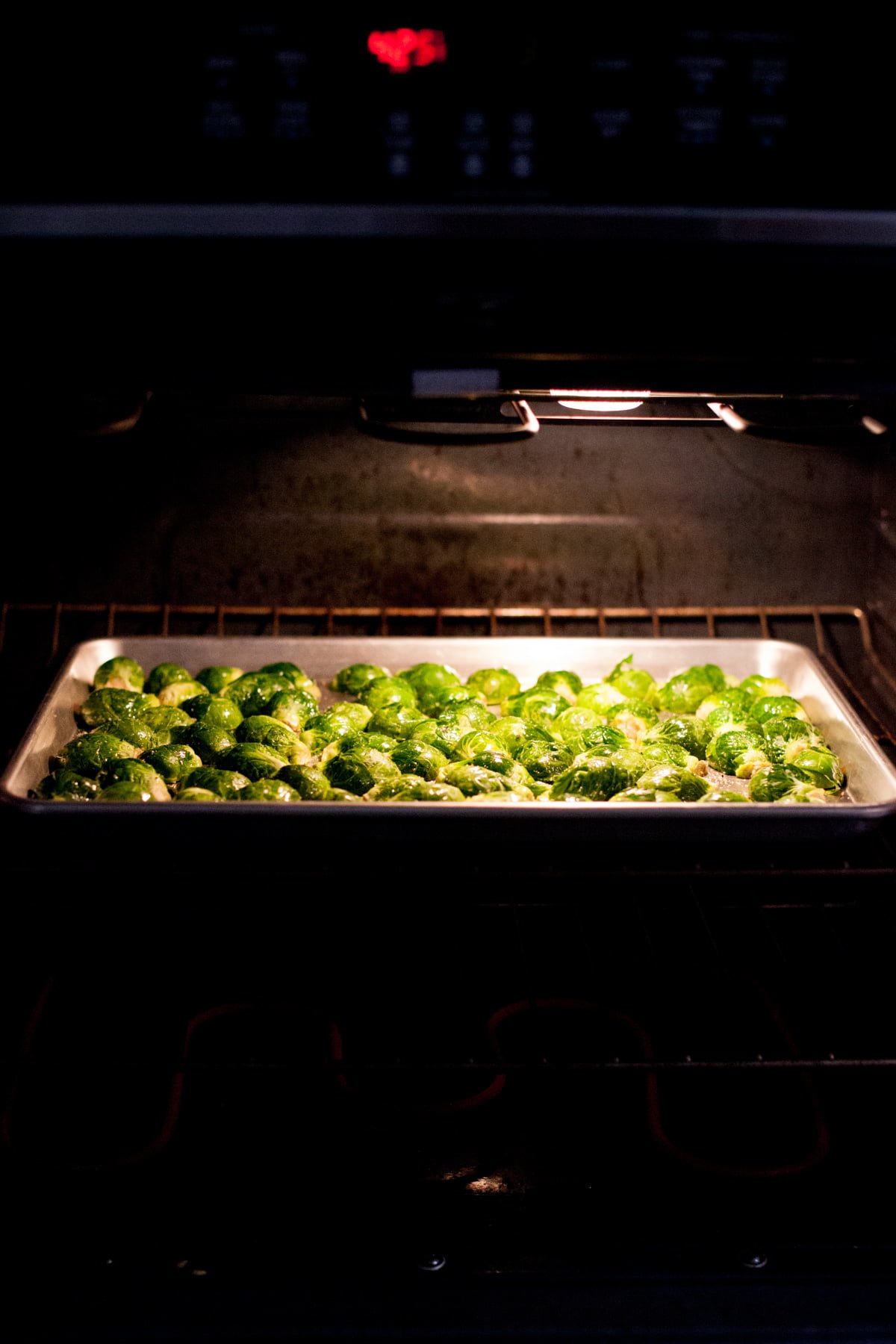 At that temperature, the veggies will roast pretty darn fast, so don’t walk too far away. Depending on the size of your sprouts, you’ll want to flip them after about 15 minutes, and they’ll be ready after an additional five. Basically, when they are tender and brown, you’re good to go. Then you taste for seasoning, add more salt and pepper if you wish, and devour your super-healthy side dish. I really like to add a little bit of crunchy sea salt right before serving.

Why are my roasted Brussel sprouts not crispy?

Sounds like they got overcrowded on the pan! Whatever you do, don’t crowd the pan, or you’ll end up with steamed Brussels sprouts instead of roasted. You may need to use two sheet pans! 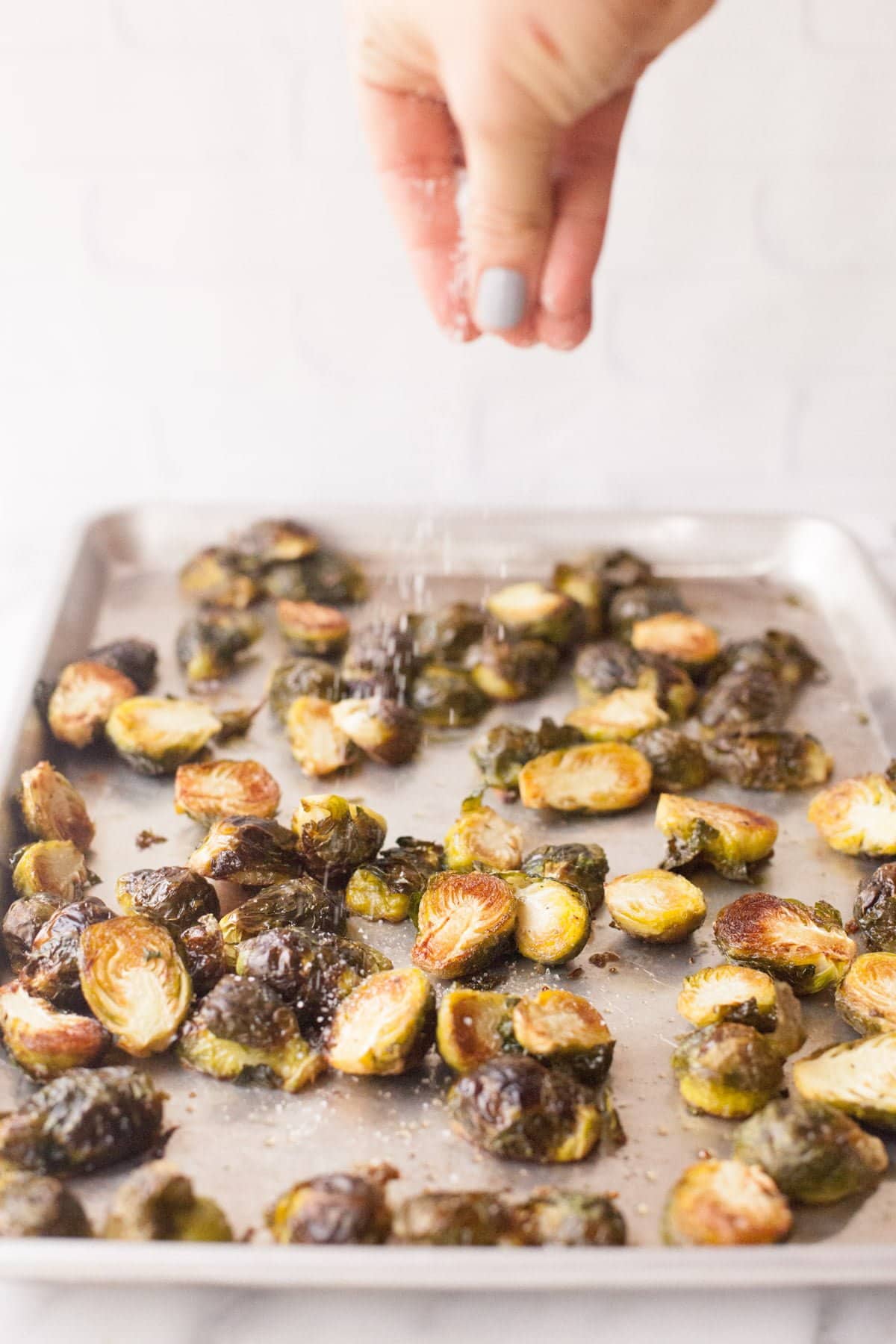 Is it better to roast Brussel sprouts whole or cut in half?

You can technically do either, but we think that cutting them in half first gives you better roasted Brussel sprouts. It gives the sprouts more surface area for delicious caramelization and browning. Plus, it speeds up the roasting time. Overcooking Brussels sprouts is where the stereotypical stinkiness comes from, so a quicker cooking time keeps the veggies sweet rather than bitter.

How should I store the leftovers?

Leftover Brussels sprouts will be good in an airtight container in the fridge for 3-5 days.

What is the best way to reheat Brussels sprouts?

Leftover Brussels sprouts can be warmed up in the microwave, but if you want there to be some crispness to the caramelized edges, you can warm them in a skillet on the stove. Alternatively, you can spread the leftovers in a single layer on a sheet pan and warm in a 350°F oven until warmed through.

And for more simple sides, check out:

You don’t really need a recipe to make these babies, but just in case you want to print it out, I’ve written it out below. Enjoy!