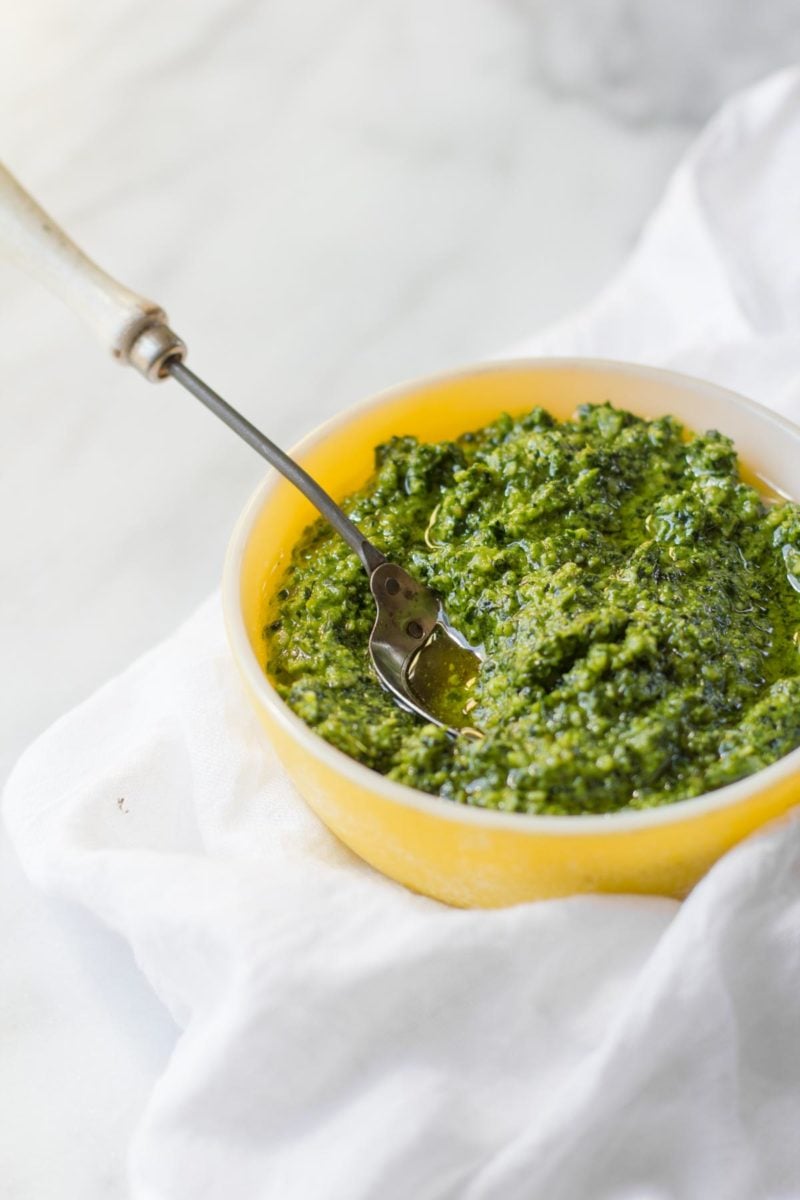 This Kale and Walnut Pesto is a great seasonal recipe for Spring and Fall. Mix it with pasta for an easy weeknight dinner!

Right around this time two years ago, when I was über pregnant with Juniper, we went back and forth about putting in a garden. We loved gardening, but Juniper’s due date was at the beginning of June (her June 21st birthday laughs in the face of due dates), and it just felt like asking for trouble to put in a garden when we were expecting a tiny human.

But my husband really wanted to do it. Because he’s optimistic and hard-working and idealistic and, sometimes, a little bit delusional (love you, baby). So, like all good old married couples, we compromised. We put in a much smaller garden, and focused mostly on cool-weather crops that would have run their course by the time the nugget made her arrival. 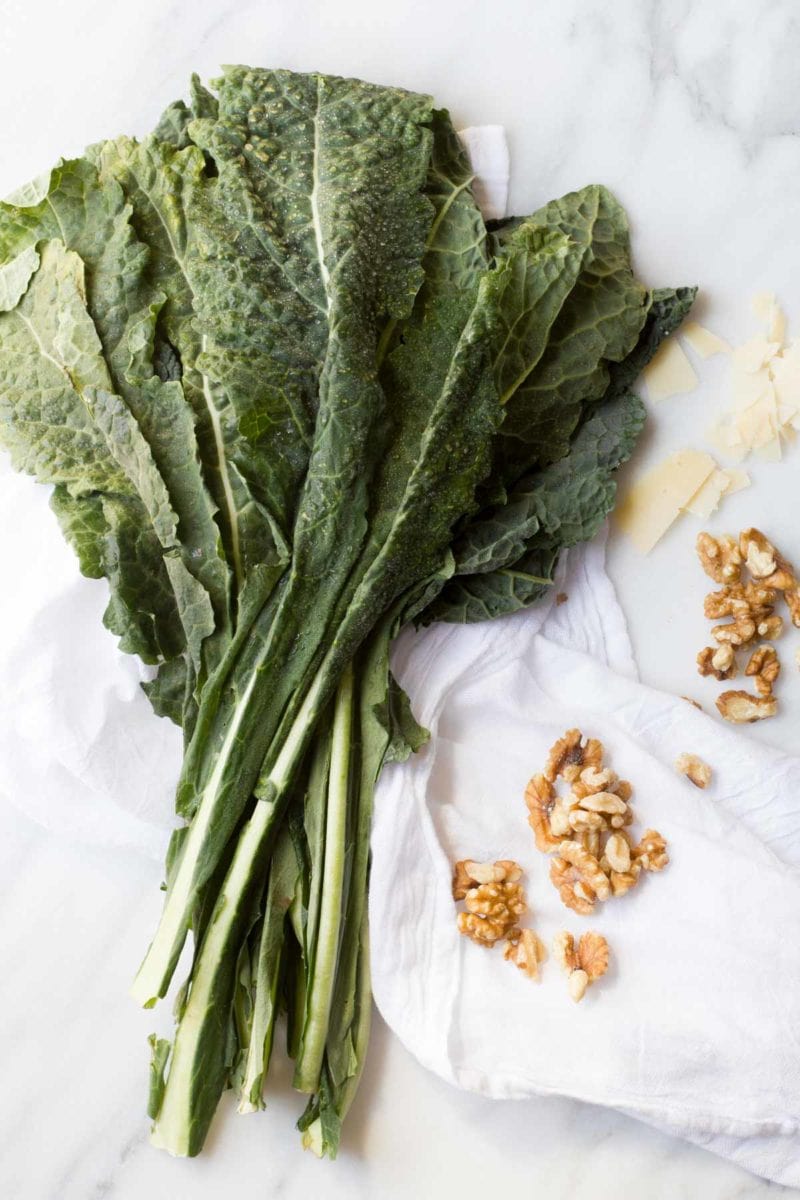 At the time, my husband worked doing social media stuff for a local nursery, and one day after we’d made our garden decision, he came home from work with some kale starts from the nursery. He excitedly pulled them out of the car to show me, and I pretty much immediately started laughing.

Why? Well, did you think there were one or two kale plants in the flat? You know, the amount that would be reasonable for two people who are expecting a baby in the middle of the gardening season? Heck no. There were sixteen kale plants. Six. Teen. Now, those of you who don’t do a lot of gardening might not know this, but kale is incredibly prolific, easy to grow, hardy, and pretty much impossible to kill.

He just got a little excited. It was cute. I love him lots. 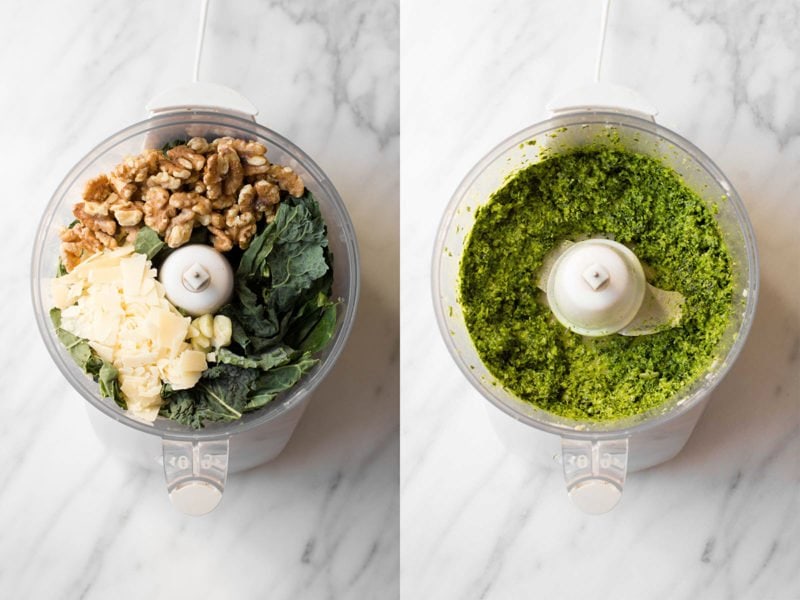 We planted all 16 of those kale plants, and all 16 of them took off like gangbusters. We were eating kale smoothies for every breakfast. Kale salads at every lunch. Kale hash for supper. I made kale chips. I froze kale. I donated kale (by the bushel—literally) to our local food pantry. I came thisclose to setting up a kale stand at the end of my driveway. If that’s not a thing, it totally should be.

And then, the beautiful bundle of joy that is Juniper made her arrival, and just like I suspected, we had no spare time or energy to garden. We stopped watering. We stopped weeding. And eventually those kale plants, as resilient as they are, couldn’t handle the neglect any more, and went to the big kale patch in the sky. 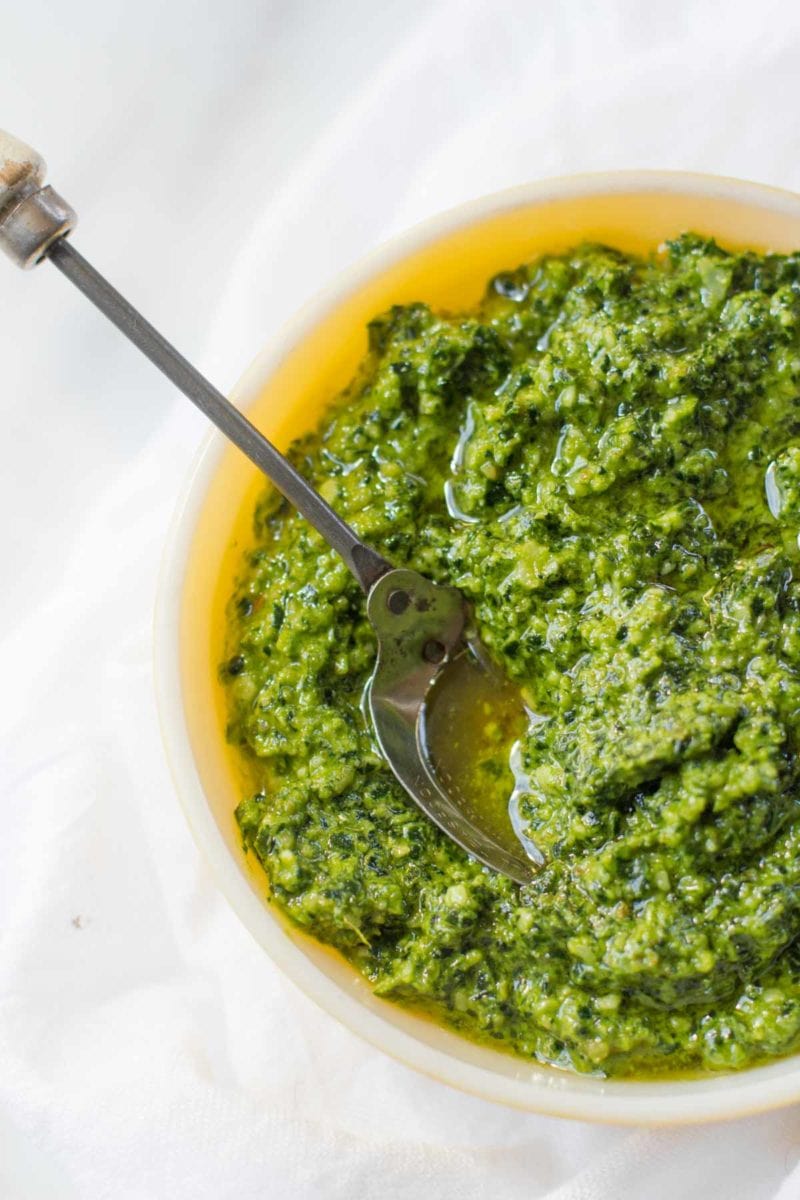 I’m so glad that Craig convinced me that we should put in a garden that summer, because not only was it a great distraction from my third trimester discomfort, but it really broadened my kale horizons. That sounds so silly, but there is nothing like having pounds and pounds of a produce item to help you stretch your recipe development muscle.

One of my favorite discoveries from the Summer of Kale/Juniper is kale and walnut pesto. Now, kale pesto is nothing new, and I’m not even a little bit claiming it to be “mine.” In fact, I was making kale pesto way before the Kale Takeover of 2014. But what I did do was really perfect my kale pesto recipe that summer. And I’ve been making it ever since. 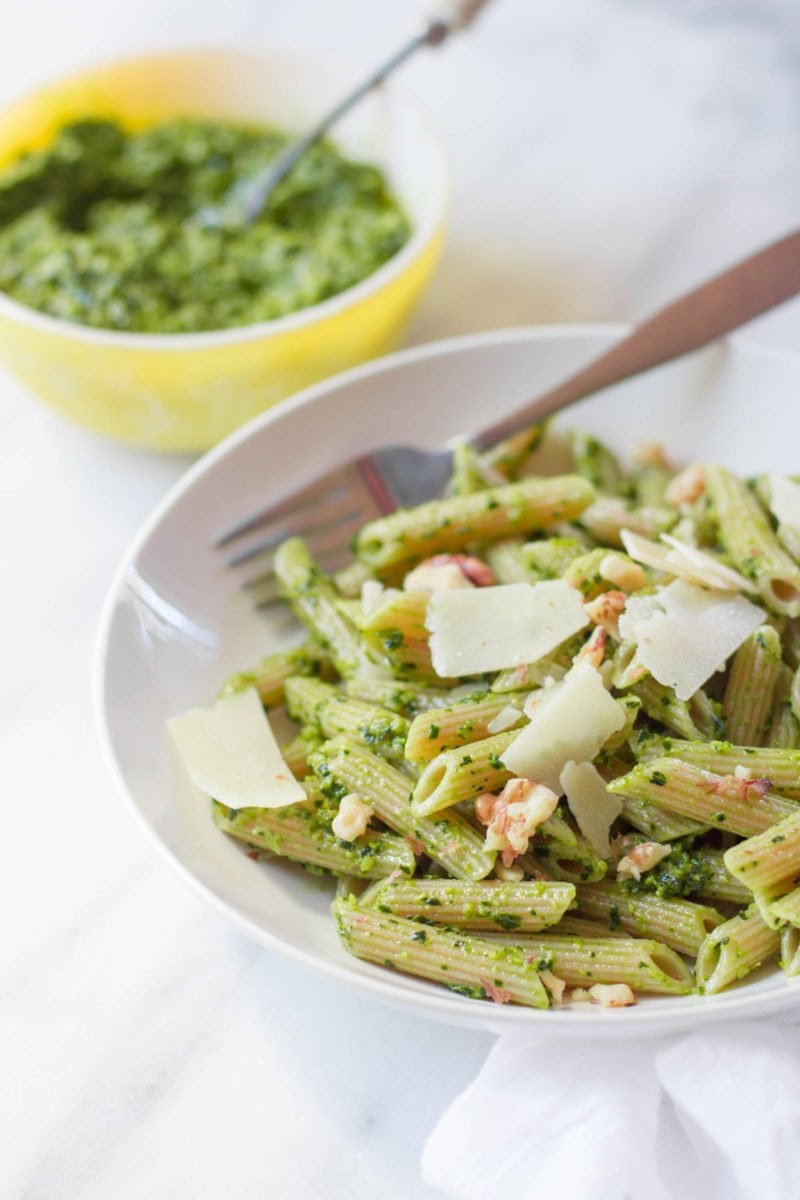 One of the issues I have with many of the kale pesto recipes out there is that they still call for fresh herbs like basil or parsley, which is all well and good if you live in Southern California, but here in the Midwest, when kale is at its peak, fresh basil is not.

I know, I know, I can buy it for $5 an ounce at the grocery store, and that’s good in a pinch if you need a little for a recipe, but I longed for a kale pesto that was, um, just kale. I wanted a pesto that was in-season in the Spring and Fall, and this Kale and Walnut Pesto is it! 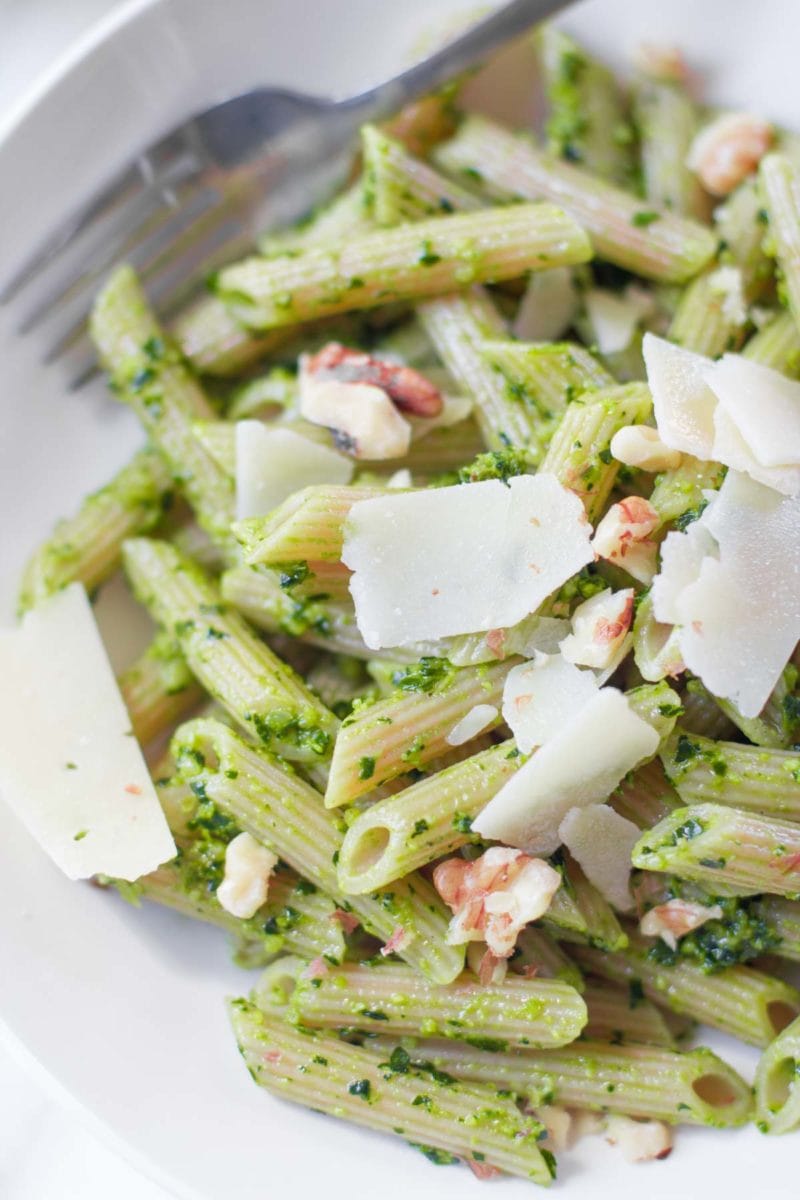 You can use this kale and walnut pesto for just about whatever you want to drizzle a flavorful sauce on, but the classic (and, let’s be honest, best) way to serve it is on some hot, piping pasta. Pesto pasta is one of my absolute favorite easy weeknight dinners. Boil some pasta. Drain, but reserve a bit of the cooking water. Toss pasta with pesto and cooking water. Serve. You can top it with meat, if you like, or a runny egg or nothing at all. And it’s always delicious. Enjoy!

To use on pasta: cook pasta according to package directions. Reserve 1 cup of cooking water before draining. Toss drained pasta with desired amount of pesto and cooking water to create a sauce.