Meal Plans →
Recipe At-A-Glance
...
Canning & Preserving5 minutes active time
Dehydrating tomatoes is an easy way to preserve them, and there are three ways to do it. Read our guide to learn how.
Jump Directly to Recipe 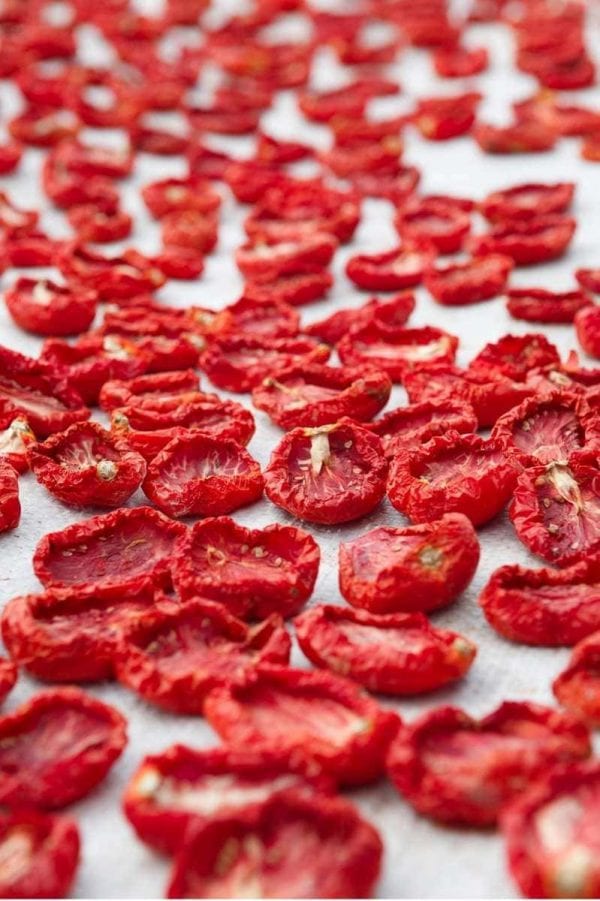 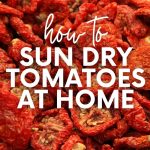 While you know we love canning and freezing, there’s a hidden preserving gem that will allow you to enjoy the fresh flavor of summer throughout the long winter months—dehydrating! Dehydrating is an easy way to preserve your tomato harvest, and there’s very little prep work. You just slice your clean tomatoes and begin dehydrating.

There are several methods for dehydrating tomatoes, and for most of them, you don’t need any fancy equipment to get started. All you need is a little patience and a whole lot of tomatoes! Your oven, a dehydrator, or even the power of the sun can turn fresh, juicy tomatoes into sweet, compact treats. 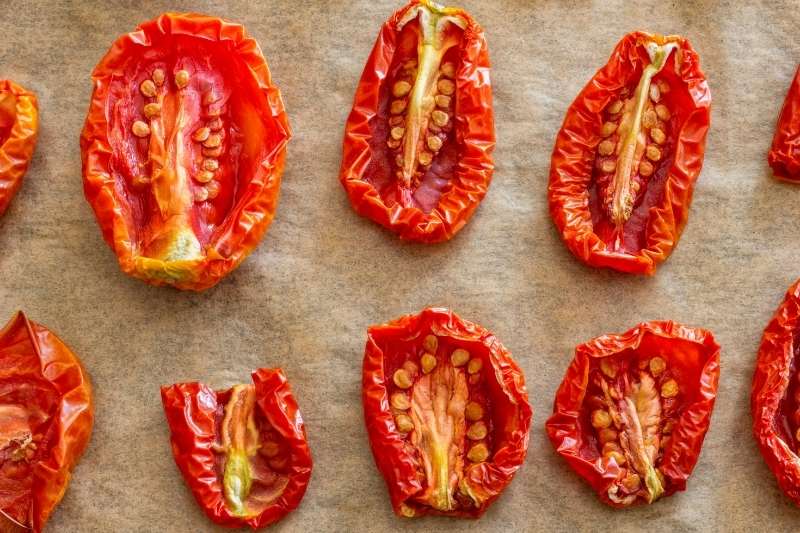 What type of tomato is best for dehydrating?

Any tomato can be dehydrated, whether it’s a firm paste tomato, a juicy beefsteak, or a sweet cherry tomato. This makes dehydrating tomatoes easy because you can use any tomato that you have on hand. That being said, there are some subtle differences between them.

Cherry, grape, and beefsteak tomatoes aren’t canned or frozen as often because of their watery texture and abundance of seeds. So if you have an abundance of these tomatoes, dehydrating them makes a lot of sense.

You’re probably using your plum tomatoes, such as romas, in sauces and canning recipes. But if you do choose to dry roma tomatoes, their meaty flesh allows them to dry slightly faster than slicing and cherry tomatoes. 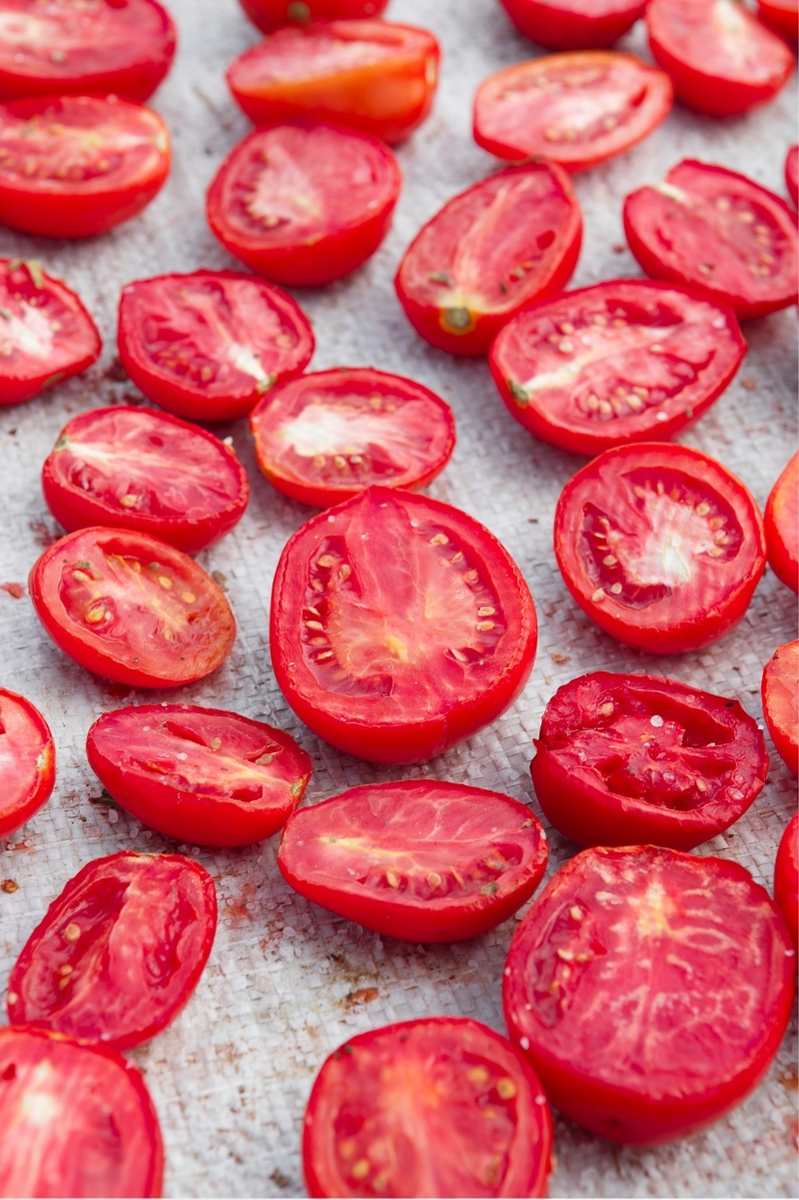 All three methods work well, but not every technique will work for every person.

Sun-dried tomatoes need several days of warm, low-humidity weather to properly dry. Too much humidity in the air can cause your tomatoes to mold. If you don’t live in an arid climate, using the sun to dry tomatoes might not work for you. It’s also the hardest method to control—we have zero control over the weather—so if you’re new to dehydrating, you might want to practice with the oven or dehydrator method first.

Dehydrating tomatoes in a dehydrator is probably the easiest method for beginners, since you control the temperature, and you just set it and forget it. There’s also a steady flow of warm air around all of your tomatoes, so you’re going to get evenly dried slices in the end.

However, not everyone has a dehydrator handy, so if you don’t want to invest in any equipment, you can use your oven for dehydrating tomatoes. The results will still be delicious!

Oven drying isn’t as easy as using a dehydrator, but it’s still fairly simple. It’s worth noting that some ovens don’t go as low as 160°F. If you’re in this situation, you’ll have to pay more attention to your tomatoes by checking on them often. This way, you can be sure they’re not overly dried out, which can cause them to blacken and become too crispy.

Tell me about dehydrating tomatoes in the oven!

Oven drying is the most accessible method for dehydrating tomatoes—you don’t need any special equipment, and you don’t have to worry about the weather. To dry tomatoes in the oven:

If you’re drying multiple trays of tomatoes, you might want to prop open your oven door a bit to allow steam to escape.

What about dehydrating tomatoes in a dehydrator?

Using a food dehydrator is the easiest way to dry tomatoes—it is the most hands-off and least finicky method. All you have to do is: 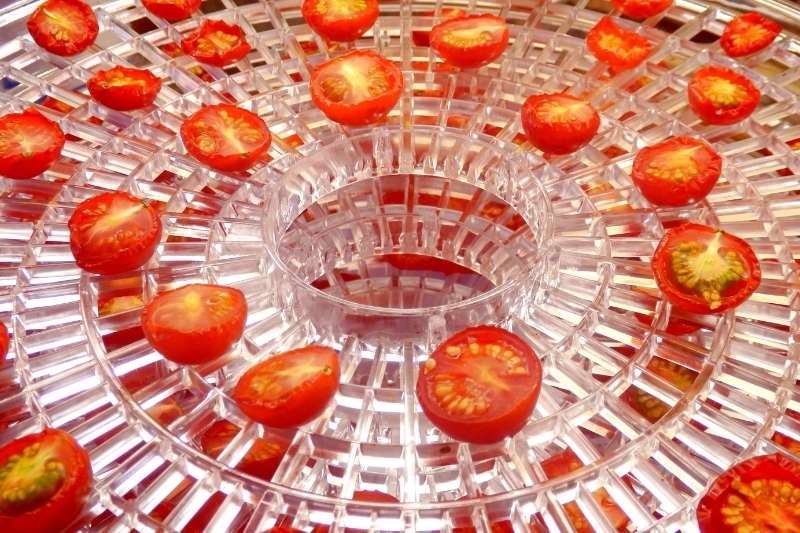 What is the best food dehydrator?

There are a lot of really expensive food dehydrators out there that do great work, but we’ve used this very affordable Nesco Snackmaster Food Dehyradtor for years with excellent results. It’ll set you back less than $100, and you can expand it to hold up to 12 trays—meaning you can dehydrate over 13 square feet of produce at a time! That’s a lot of tomatoes!

How do I make sun dried tomatoes? 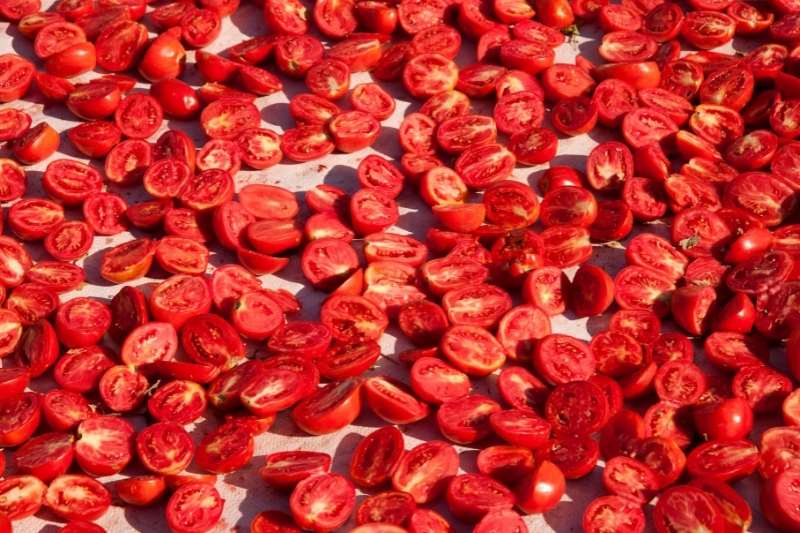 How do I know when my tomatoes are done?

Your tomatoes are finished when they are dry, but still flexible. Over-dried tomatoes will be brittle and tough. Make sure the tomatoes do not feel soft or moist. If tomatoes aren’t dried long enough they will spoil quickly.

Can I cut my tomatoes thinner to speed up drying time?

For best results, stick to the slicing recommendations in the recipe below and make sure that your slices are all roughly the same thickness. 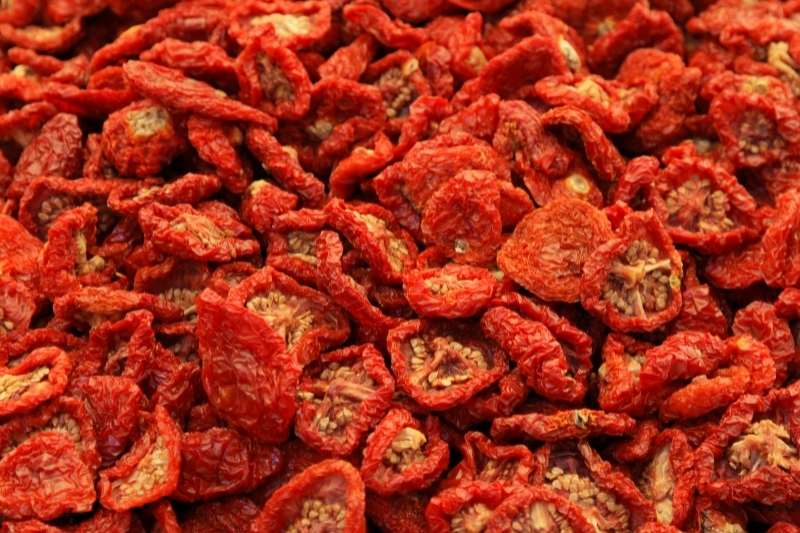 Can I increase the temperature to speed up the dehydrating time?

Once again, patience is key. It takes time and a steady low heat source for delicious dehydrated tomatoes. The water in your tomatoes needs to slowly evaporate—not steam the tomatoes into a goopy mess.

If the temperature is too high, you risk burning or steaming your tomatoes instead of dehydrating them. If tomatoes are dehydrated at too high of a temperature, you risk the middle remaining moist while the outside hardens, which is a recipe for mold.

How can I use my dehydrated tomatoes?

Dehydrated tomatoes are great as toppers on salads, pizzas, and sandwiches, or mixed into spreads. They make tasty additions to soups, stews, and other dishes where they’ll absorb the liquid around them, plumping them up and re-hydrating them. You can also toss them into your casseroles, omelets, and pasta salads for a burst of fresh tomato flavor. They’re also pretty tasty on their own as a snack. The sky’s the limit for these compact dry tomatoes!

Dry at least one batch of your tomatoes until they are brittle dry. Then, once completely cooled, grind them in a coffee grinder. You just made tomato powder! Mix with a little water, and you have instant tomato paste. You’ll never need to buy those little cans or tubes again!

How do I rehydrate the tomatoes?

Soak tomatoes in boiling water for about 10 minutes. Remove with a slotted spoon and pat dry before using. 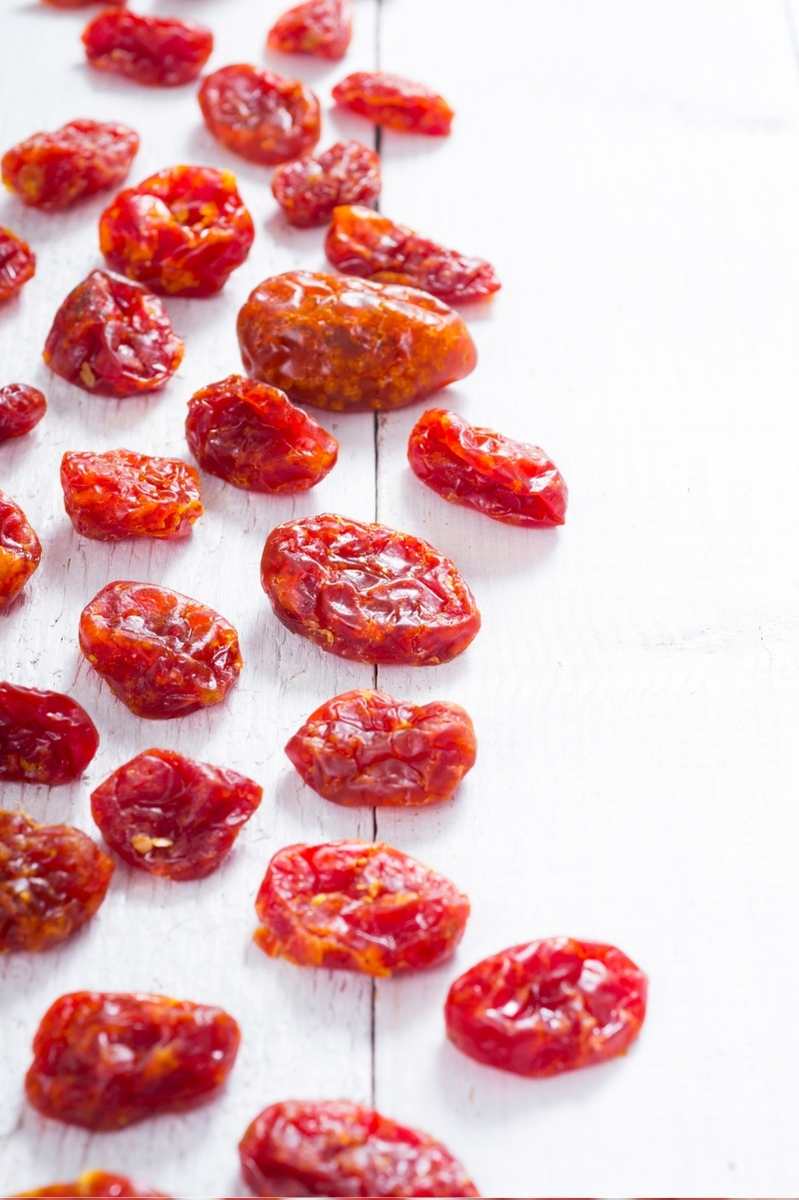 How long will dehydrated tomatoes last?

Properly stored, dehydrated tomatoes should last at least six months at room temperature. When stored in the fridge or the freezer, you can stretch that time to a year.

When you open your tomatoes, check that there’s no mold before eating them. Dehydrated tomatoes that have gone bad often have an unpleasant smell, and they’ll taste stale.

What’s the best way to store your tomatoes after they’ve been dehydrated?

Canning jars are perfect for dehydrated tomatoes storage because they’re airtight. You can use any airtight container as long as it’s completely dry on the inside. Your container should be stored in a cool, dry location that’s out of direct light.

You can also store your tomatoes in the fridge or freezer if you want to safely extend the life of the tomatoes. 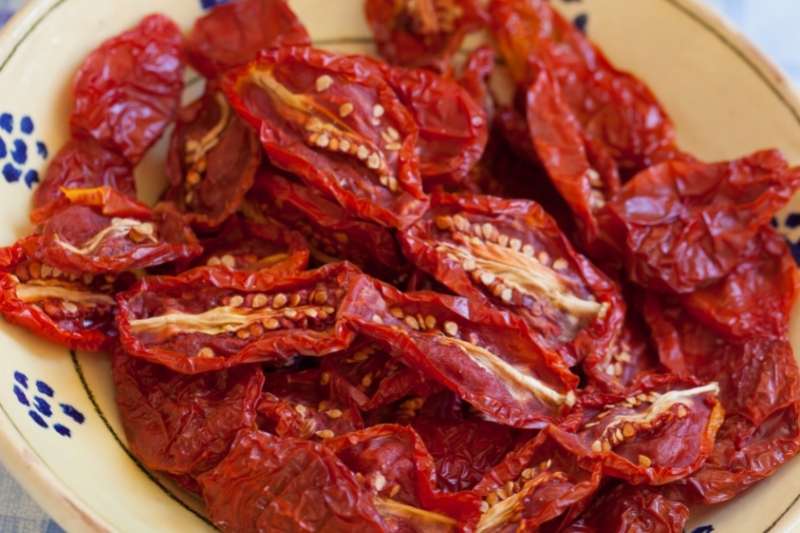 Do I need to remove the seeds and skin of my tomatoes?

Nope! The skin of the tomato contains added nutrients, and it can help your slices hold their shape during the dehydrating process. The seeds also contain beneficial nutrients, so you don’t have to remove them. When you re-hydrate your tomatoes, the skins tend to separate and float to the surface of the soup or water, making them easy to skim out if you’d like.