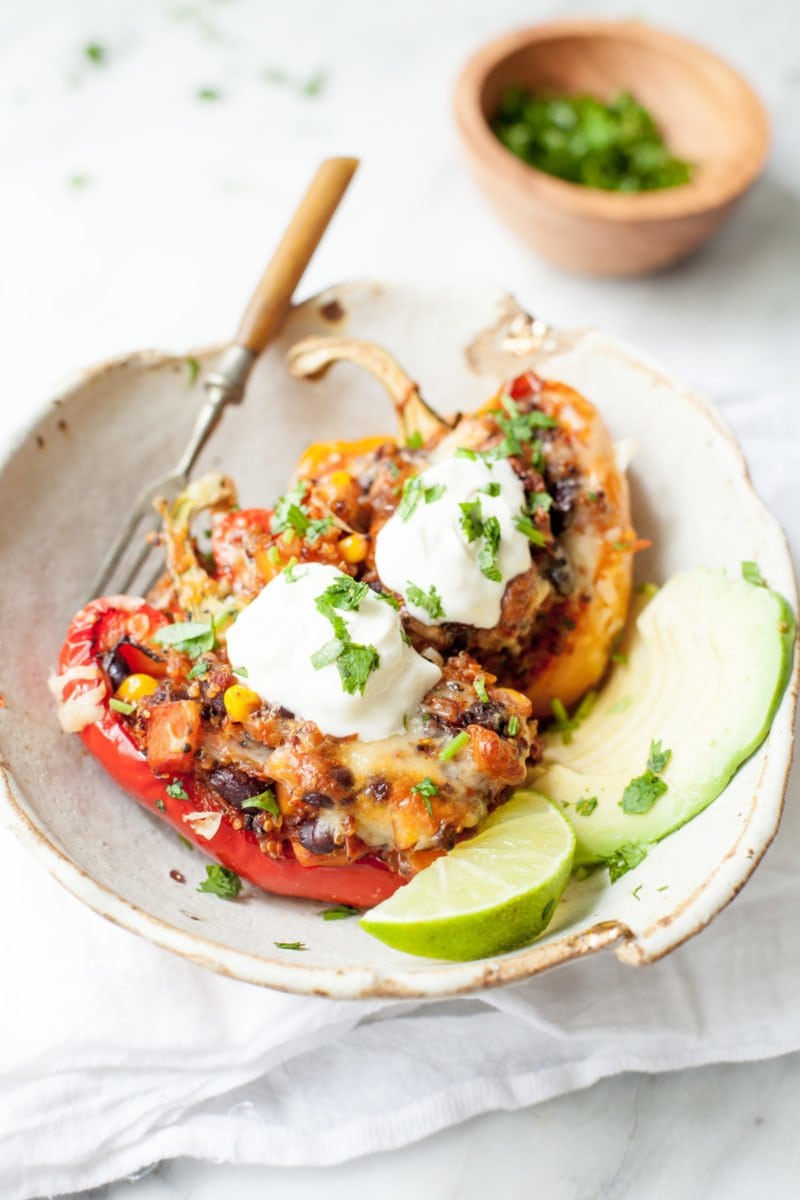 Recipe At-A-Glance
...
Vegetarian, Gluten-Free40 min
These Southwestern Quinoa Stuffed Peppers are a meatless meal that will even satisfy the meat-and-potatoes crowd!
Jump Directly to Recipe

I’m not a vegetarian, but I love cooking (and eating!) vegetarian food. When I first started eating healthier, a big tipping point in my journey was deciding that I’d center most of my meals around plants instead of meat. It’s not that I think there is anything wrong with eating meat, but I do think a lot us make meat the focus of our plates too often.

And because we have that hearty, filling, tasty hunk of meat on our plate, we tend to neglect eating good-for-us fruits, veggies, and whole grains. I know when I have something like a hamburger or pork chop on my plate, I’m a lot less likely to fill up on greens or grains. Vegetarian cooking is fun because it flips the script. Veggies become the focus, and it’s a fun challenge trying to make veggies as hearty and filling as a meat-based meal would be. 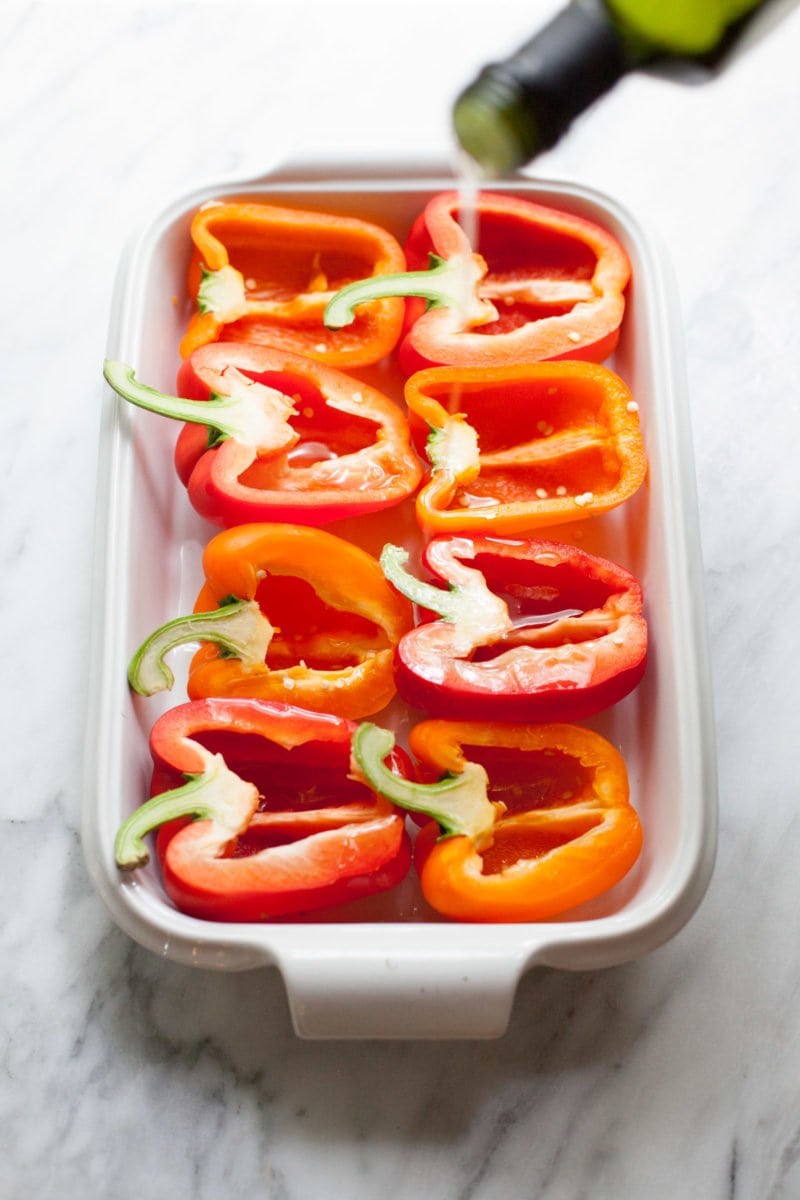 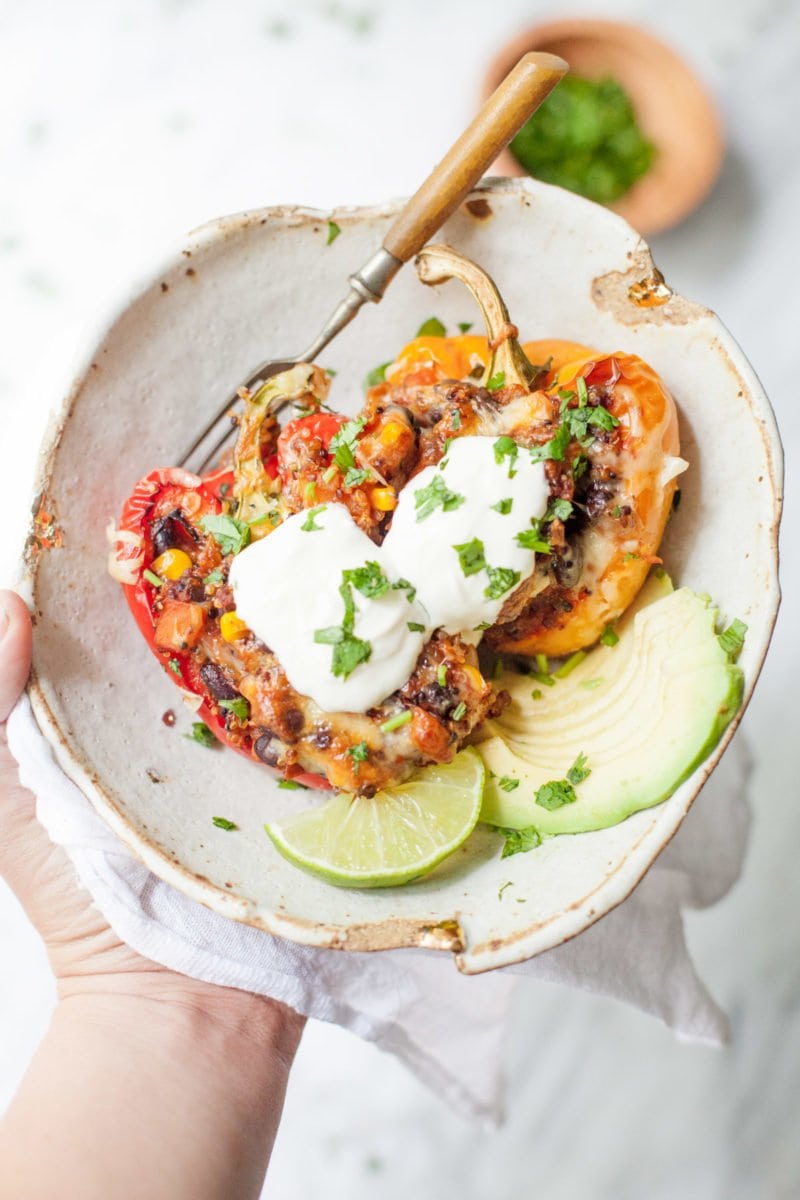 I know a lot of you struggle with making vegetarian meals feel substantial. Or, if you don’t personally, you might struggle with cooking meatless meals for your family because you’re way sick of hearing “but where’s the meat!?” when you put the plates down on the dinner table. It really is an interesting challenge to satisfy the meat-and-potatoes crowd sans the meat (and in the case of this recipe, without the potatoes either). But I think it’s totally possible!

If you’re struggling to incorporate a Meatless Monday (or meatless any day) into your family’s meal plan, here are a few suggestions I have for you: 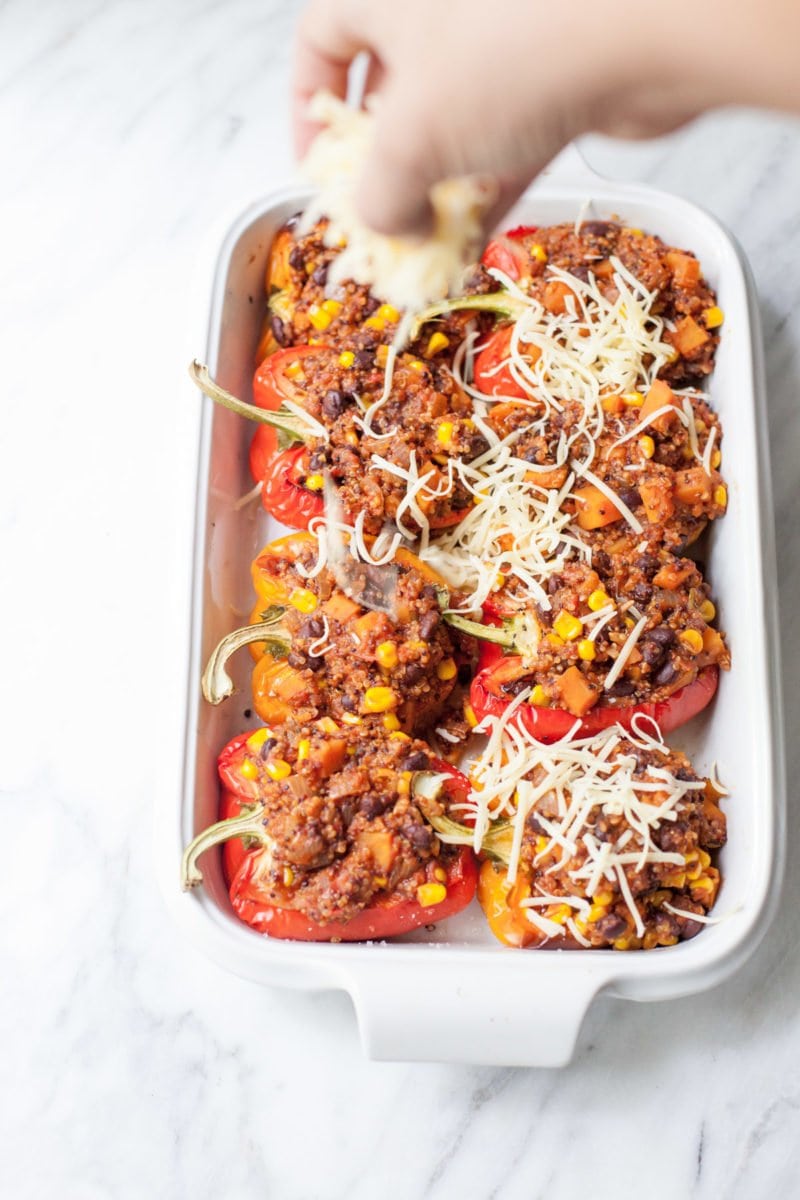 If you’re looking for a Meatless Monday dinner option, these Southwestern Quinoa Stuffed Peppers are a great place to start! As I said above, the quinoa and black bean filling is a pretty darn close facsimile to the typical ground beef filling you’d find in stuffed peppers. Packed with cumin, chiles, sweet potatoes, and corn, the filling is chock full of flavor!

These quinoa stuffed peppers are pretty much as hearty of a vegetarian meal you’ll find anywhere. We top ours with avocado, sour cream, chopped cilantro, and a squeeze of fresh lime juice. So good. So good for you. 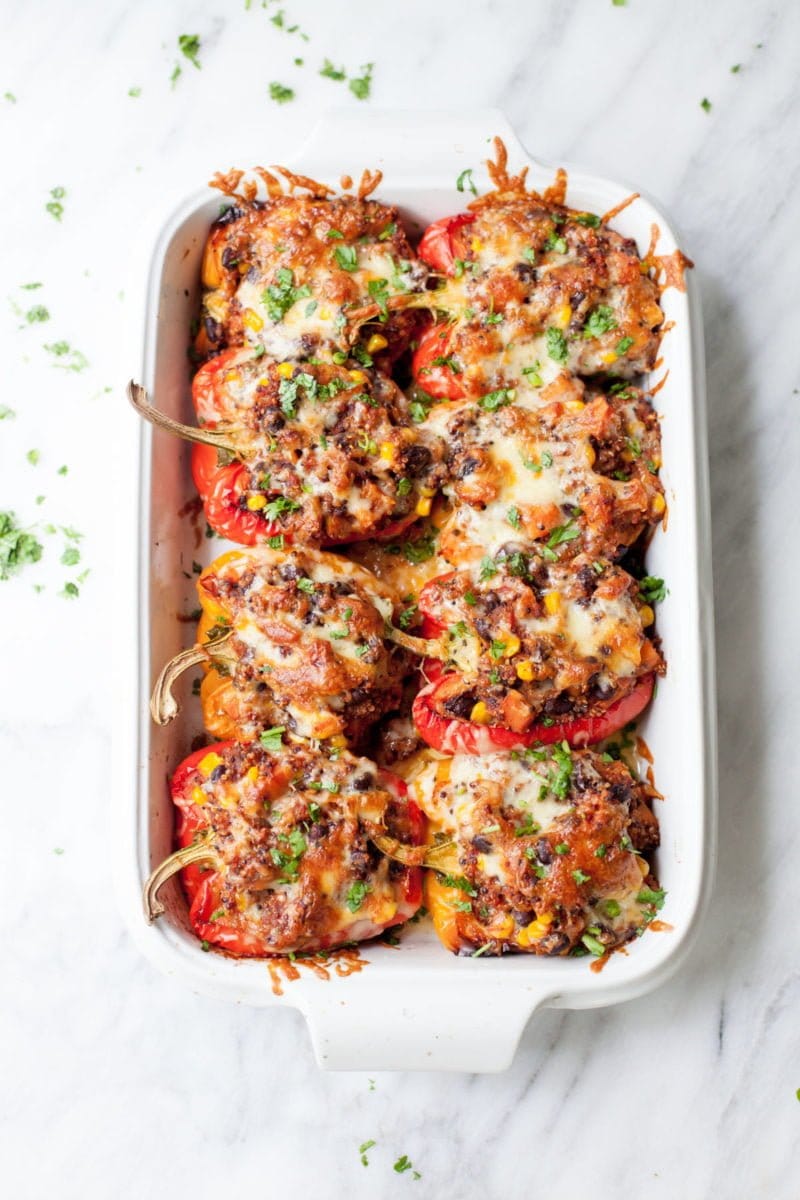 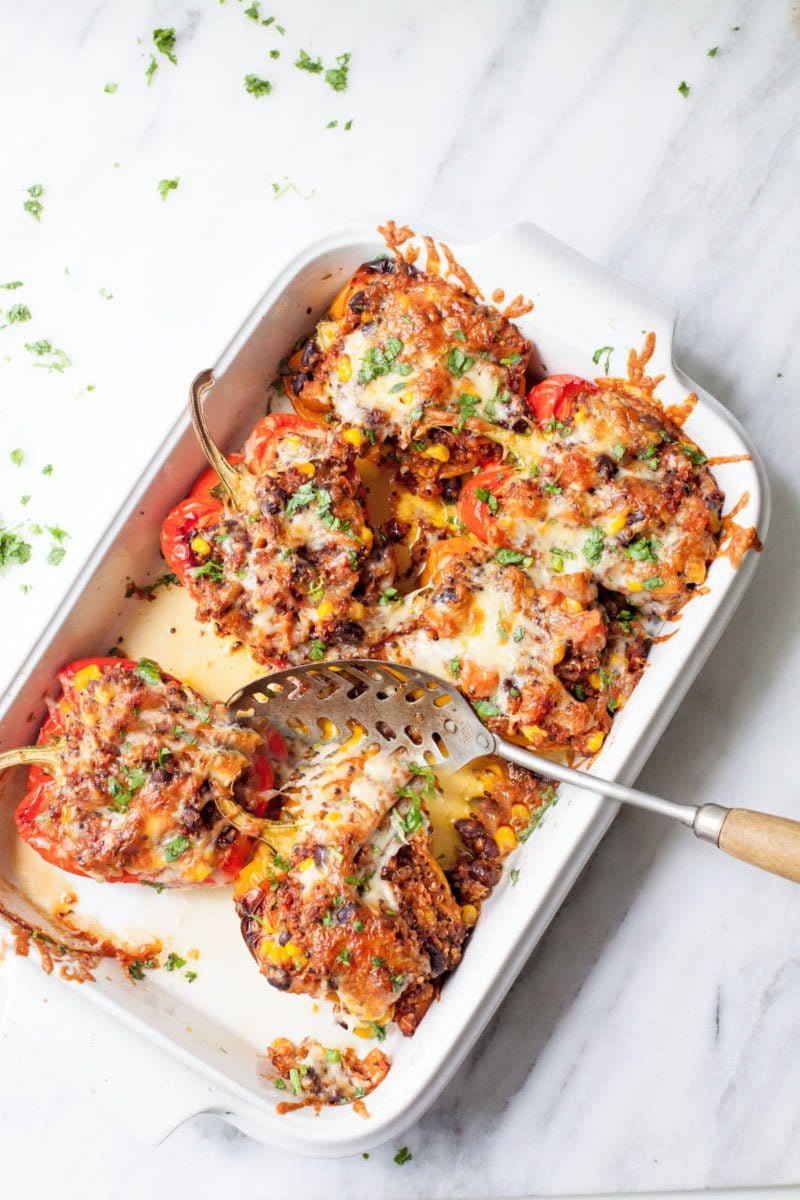 If you’ve ever struggled with cooking stuffed peppers before (the filling is done before the peppers are or they just take FOR-EVA in the oven), I use a method here that is totally fool-proof! The peppers and filling are cooked separately, and then just brought together at the very end in the oven to melt the cheese and get ooey-gooey perfect. Because I recommend filling half peppers instead of stuffing whole ones, the entire recipe takes only about 40 minutes to make, which, if you’ve ever made stuffed peppers the regular way before, you know is a big reduction in time.

This recipe makes enough filling to fill four of those giant bell peppers that I always see kicking around the supermarket in the summer. If your peppers are smaller, you can freeze the extra filling for future dinners, or use it as a side dish, in burritos, or even just as a tasty lunch! Enjoy.