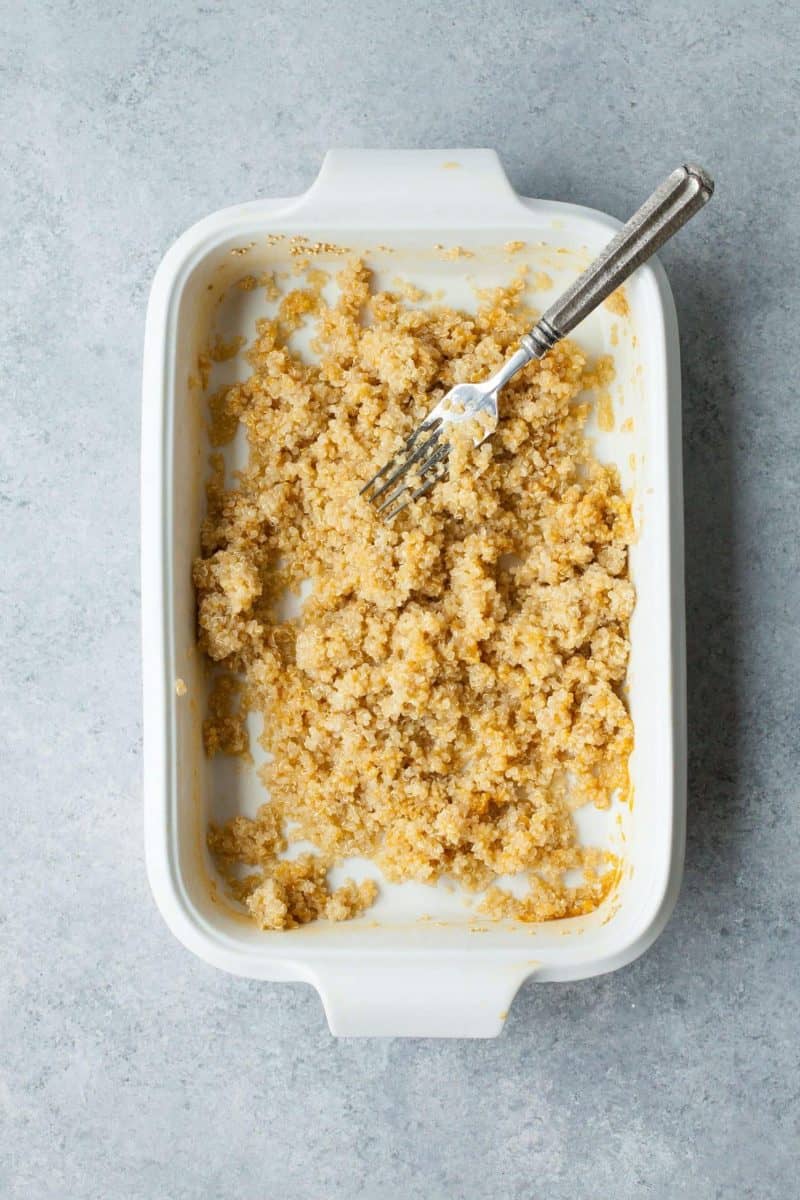 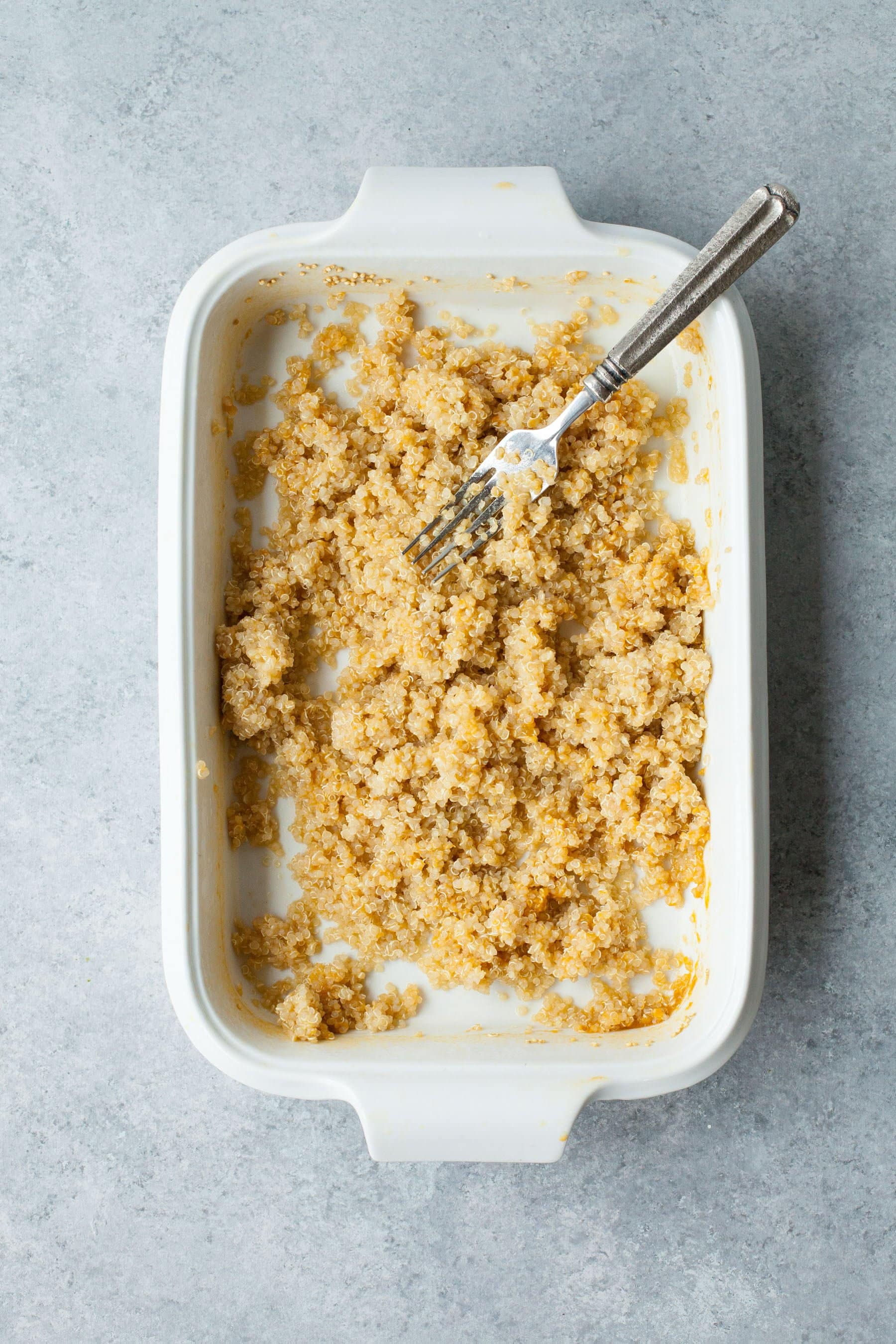 This post is brought to you by a Wholefully partner

Bulk cook quinoa and freeze it today, and you’ll have some easy breezy meals in the future. This is one of my favorite healthy meal prep tricks!

Guys, I am super pumped today to be partnering up with one of my favorite natural foods brands, Bob’s Red Mill, to bring you one of my favorite healthy meal prep tricks—cooking quinoa in bulk in the oven and then freezing it for super easy breezy meals later on.

I’ve been on the quinoa train for years now because I love that it’s a plant-based source of complete protein, super easy to cook, and delicious enough that it doesn’t really need extra butter or salt or flavoring. If you follow a gluten-free diet, quinoa has got to be in your repertoire. It’s one of my favorite gluten-free grains! Quinoa is awesome as the base to grain bowls (like this one) or cold grain salads (like this one) or even casseroles (like this one). Quinoa, for the win!

Quinoa cooks up pretty quickly on the stove (about 15 minutes), but I’m all about saving minutes where I can, so, pretty frequently, I actually bulk cook quinoa and freeze it as part of my meal prep. The key to cooking quinoa in bulk? Do it in the oven!

It sounds weird, but it turns out perfect every. single. time. And the only limitations to how much you do at once are the size of your casserole dish and the size of your oven. I promise, oven quinoa is the fluffiest, softest quinoa you’ve ever made—and it’s almost entirely hands-off.

Then, once the quinoa is cool, you freeze it flat in zip-top freezer bags for easy meals. Let me show you exactly how to do it! I promise you’ll never go back to cooking quinoa the regular way after you try this. 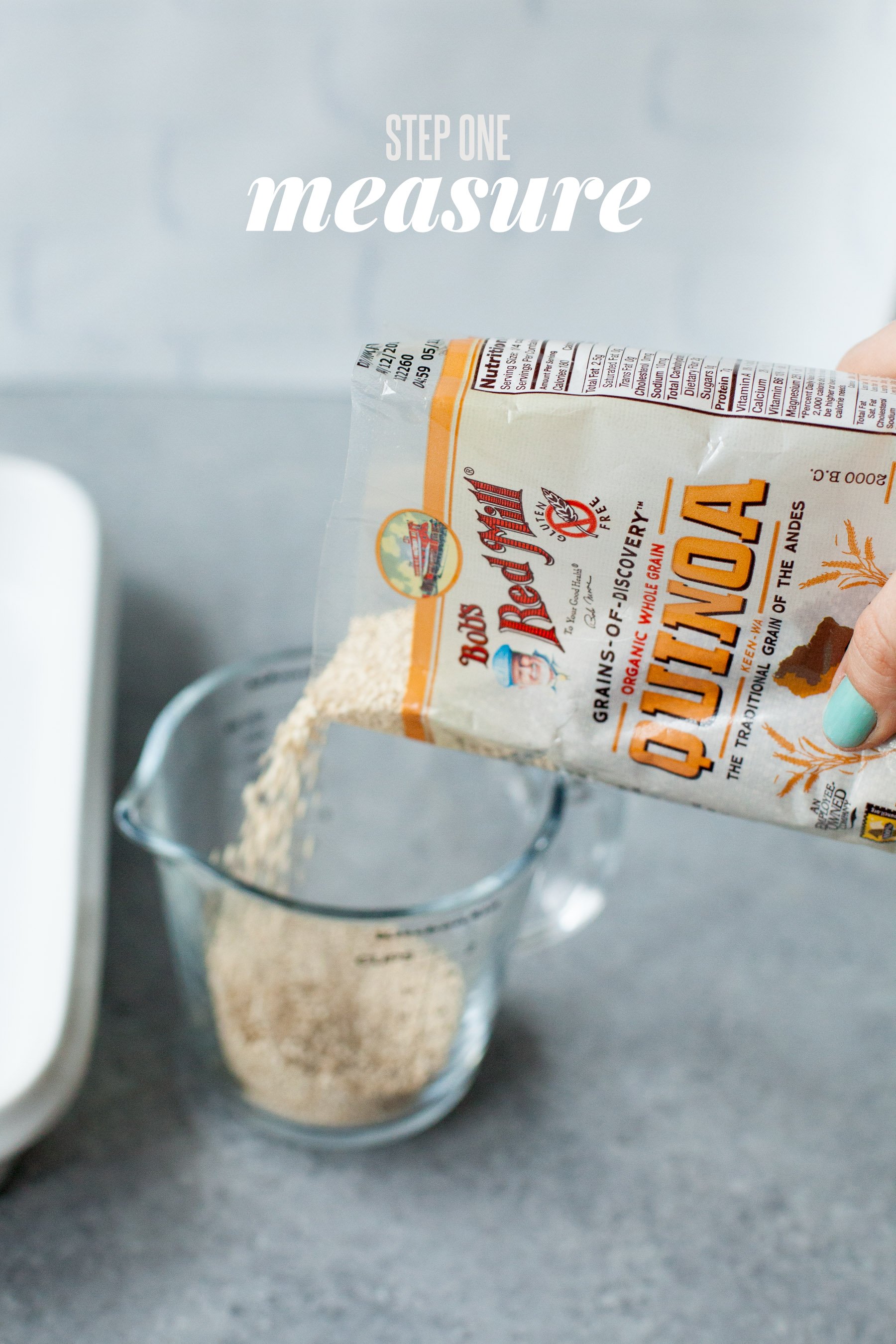 First up, measure out how much quinoa you want to make. For each cup of dried quinoa, you’ll get right around three cups of the cooked stuff. You can make as much or as little as you like. I’ve found that three cups of dried quinoa is about the max for a normal 9 x 12 baking dish. 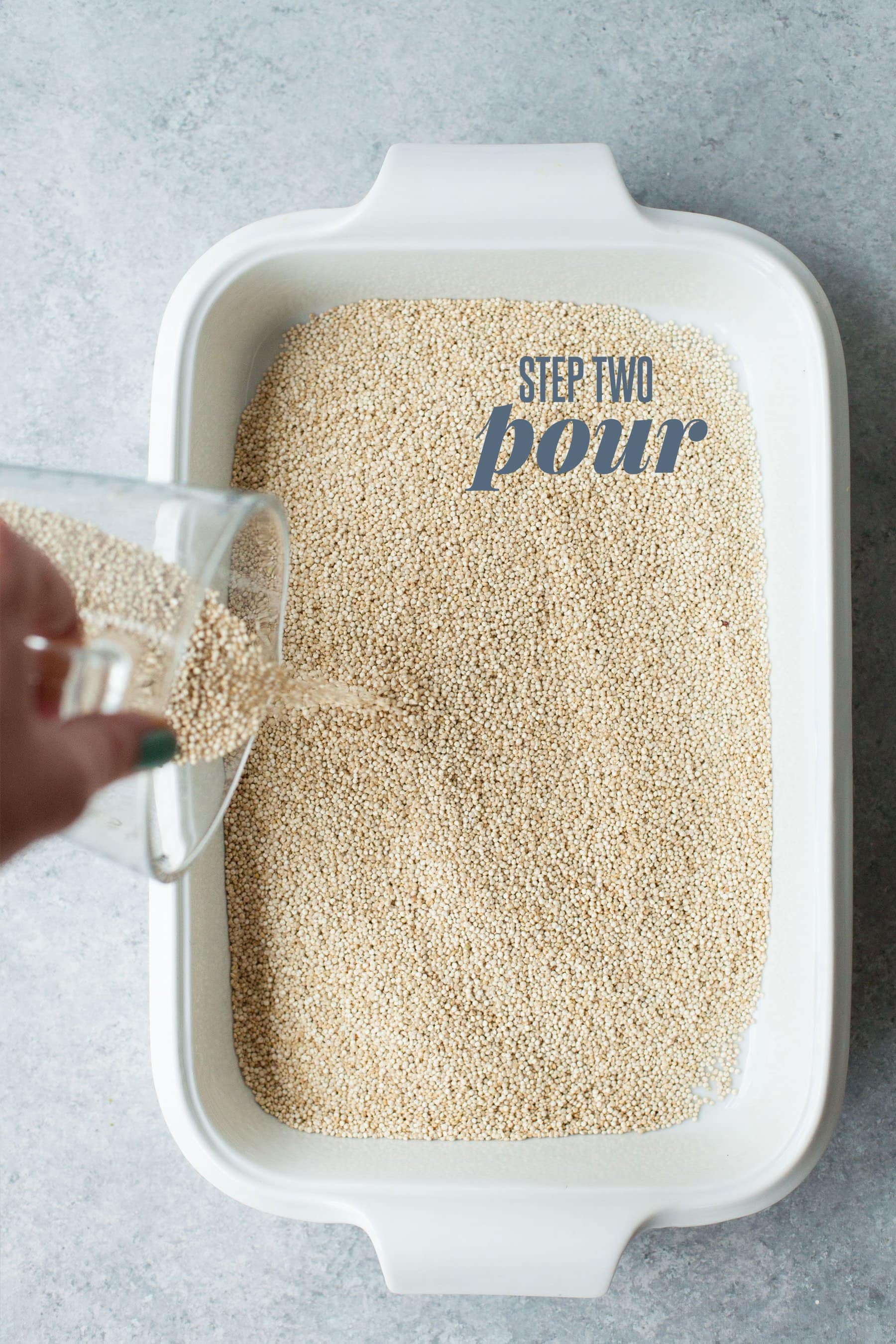 Next up, pour the dry quinoa into a baking dish. A lot of people out there like to rinse their quinoa before cooking—it helps to make the flavor more mild and remove some nuttiness. In general, I don’t rinse my quinoa when I’m using it in savory dishes. I like the nutty, earthy flavor! Bob’s Red Mill quinoa is pre-rinsed, so you can totally skip the step. Time saving = awesome. 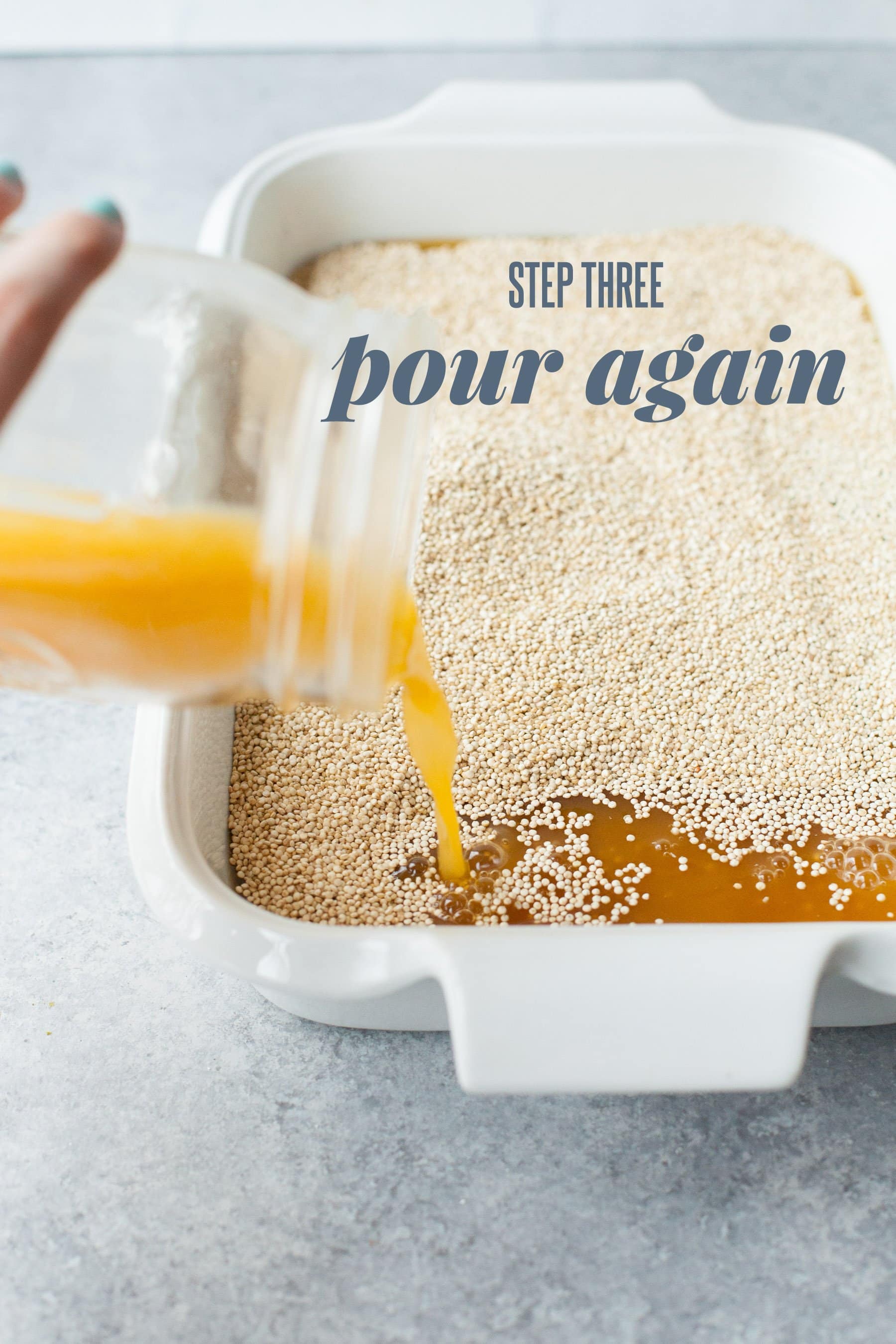 Next up, pour in the liquid—no need to stir or anything—just pour it in. Seriously.

For each cup of dry quinoa, you’ll need two cups of liquid. I like using low sodium veggie broth, but you can use chicken broth or even just plain water. This is also where you could put in other flavorings like herbs, spices, or butter and salt. I like to keep my quinoa pretty plain so it’s nice and versatile. I can always add salt in later, but I can’t take it out! 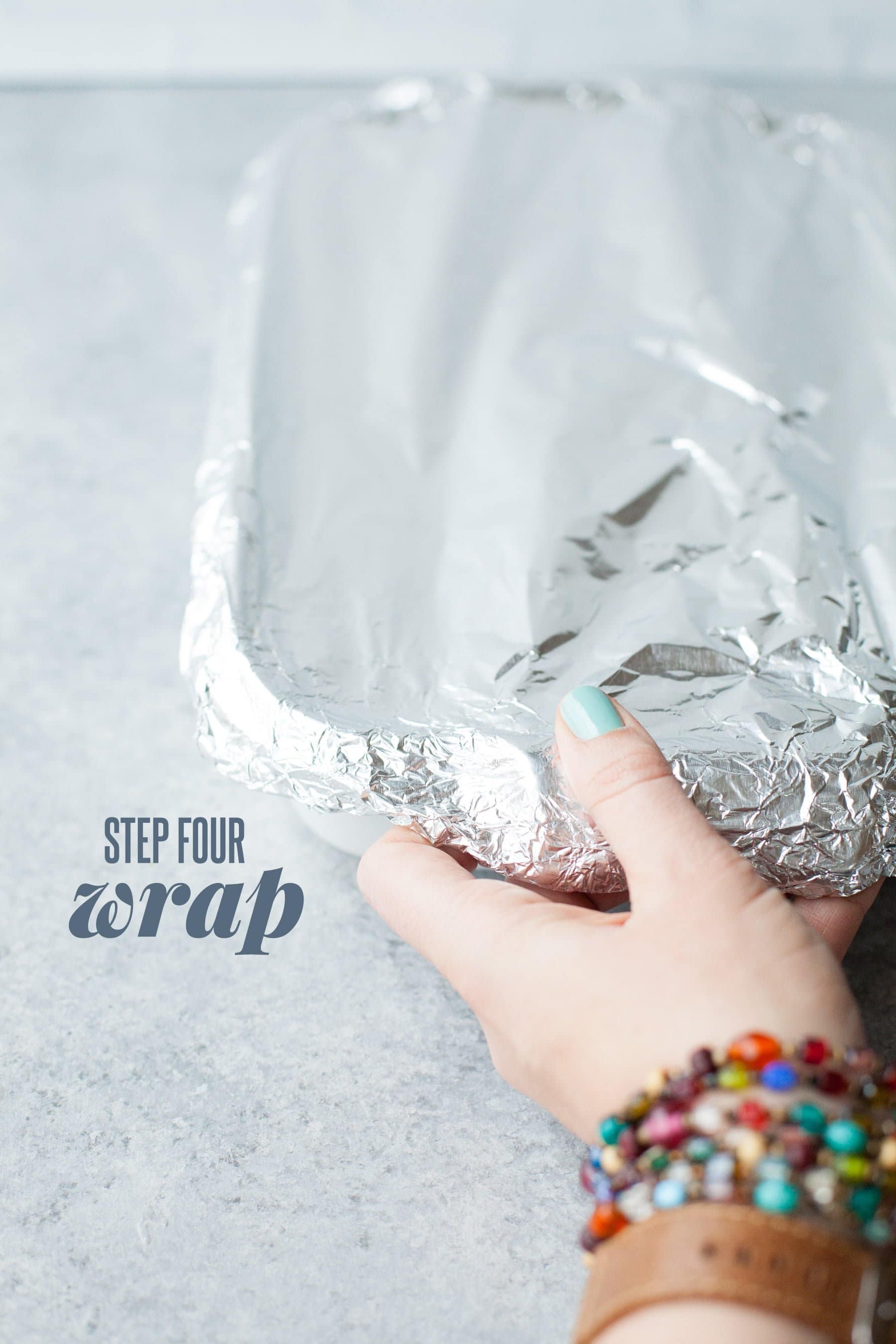 Wrap up the baking dish tightly with aluminum foil. We’re looking to create a glorious sauna for the quinoa (just like you would on the stovetop with a pot lid), so really cinch the foil down around all the edges. 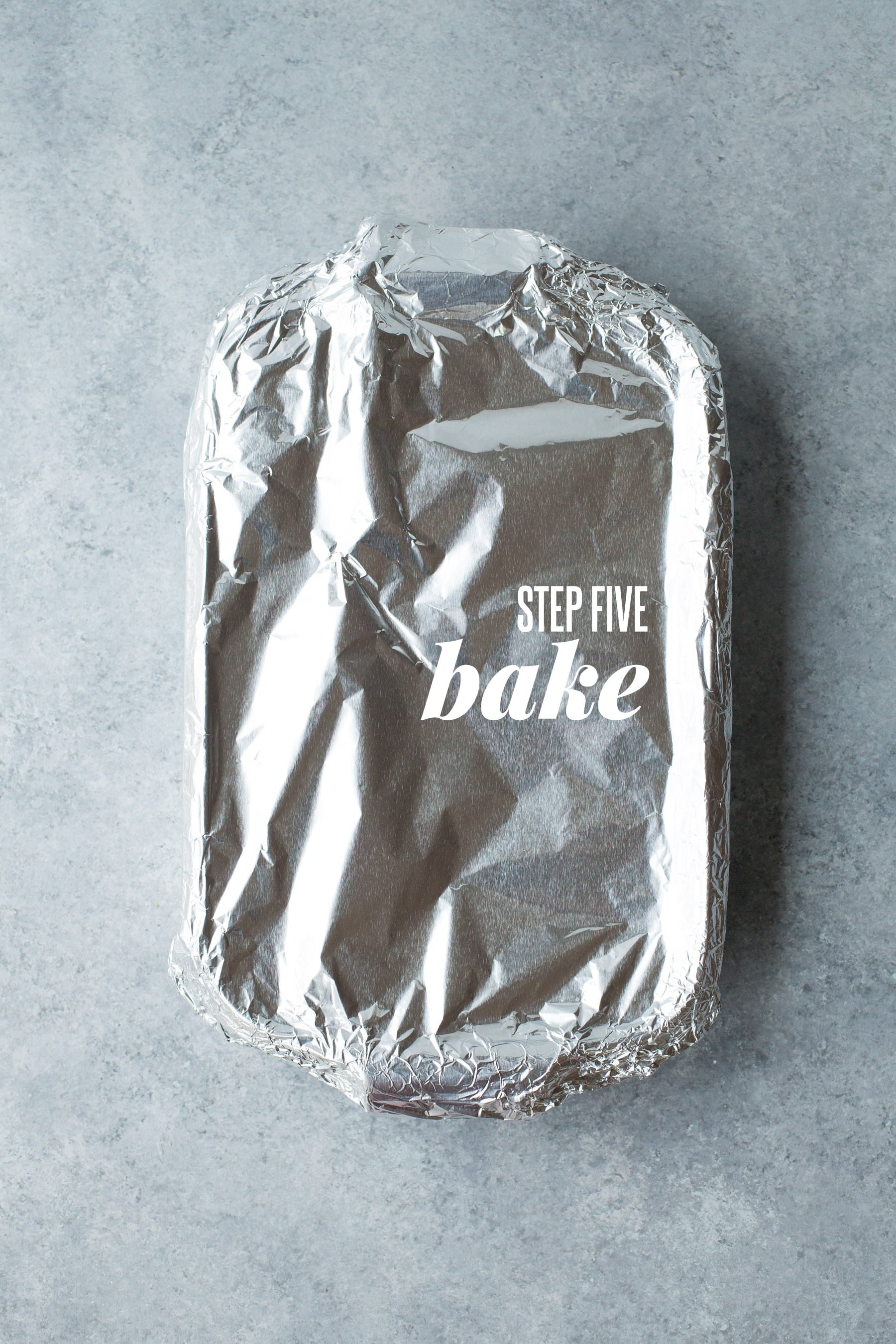 Carefully carry your dish to the oven (especially if you have a big batch—it gets pretty sloshy), and bake in a 375° oven. It’ll be done right at around 25 minutes. If you’re doing a large batch, add an extra few minutes to the cooking time just for good measure.

Once it comes out of the oven, don’t touch it! Just let it rest and steam for 5-10 minutes. Seriously, hands off. No peeking! 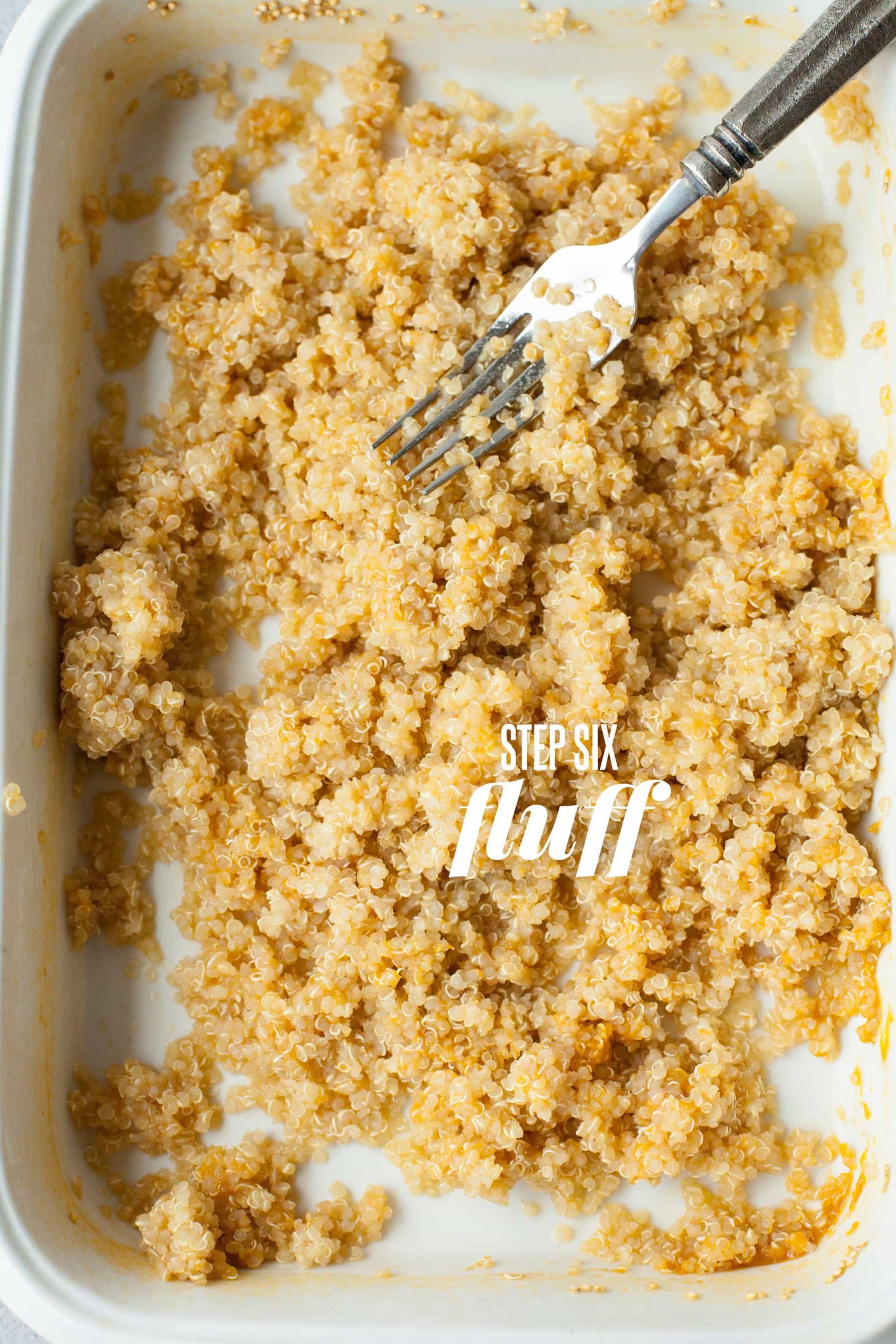 Once you’ve patiently waited for 5-10 minutes, remove the foil, and fluff all that glorious grain with a fork. Perfect. Quinoa. Swoon. 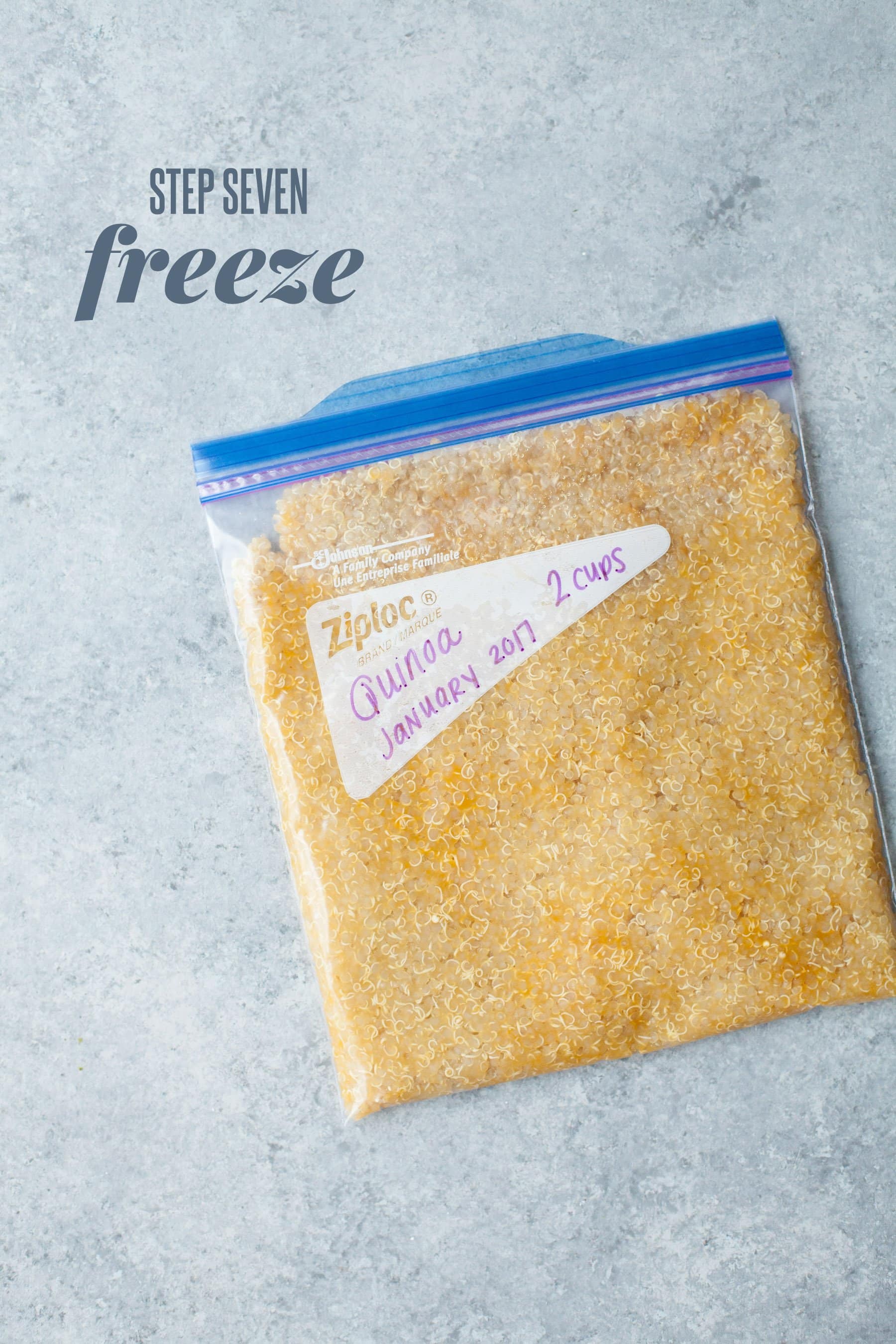 Let the quinoa cool completely, and then scoop into labeled zip-top freezer bags. I like to do two cup portions, because it’s perfect for my small family, but how much you want to put in each portion might be different.

Flatten the bag and get as much air out as possible. Then freeze flat (that makes it easier to store once frozen solid). 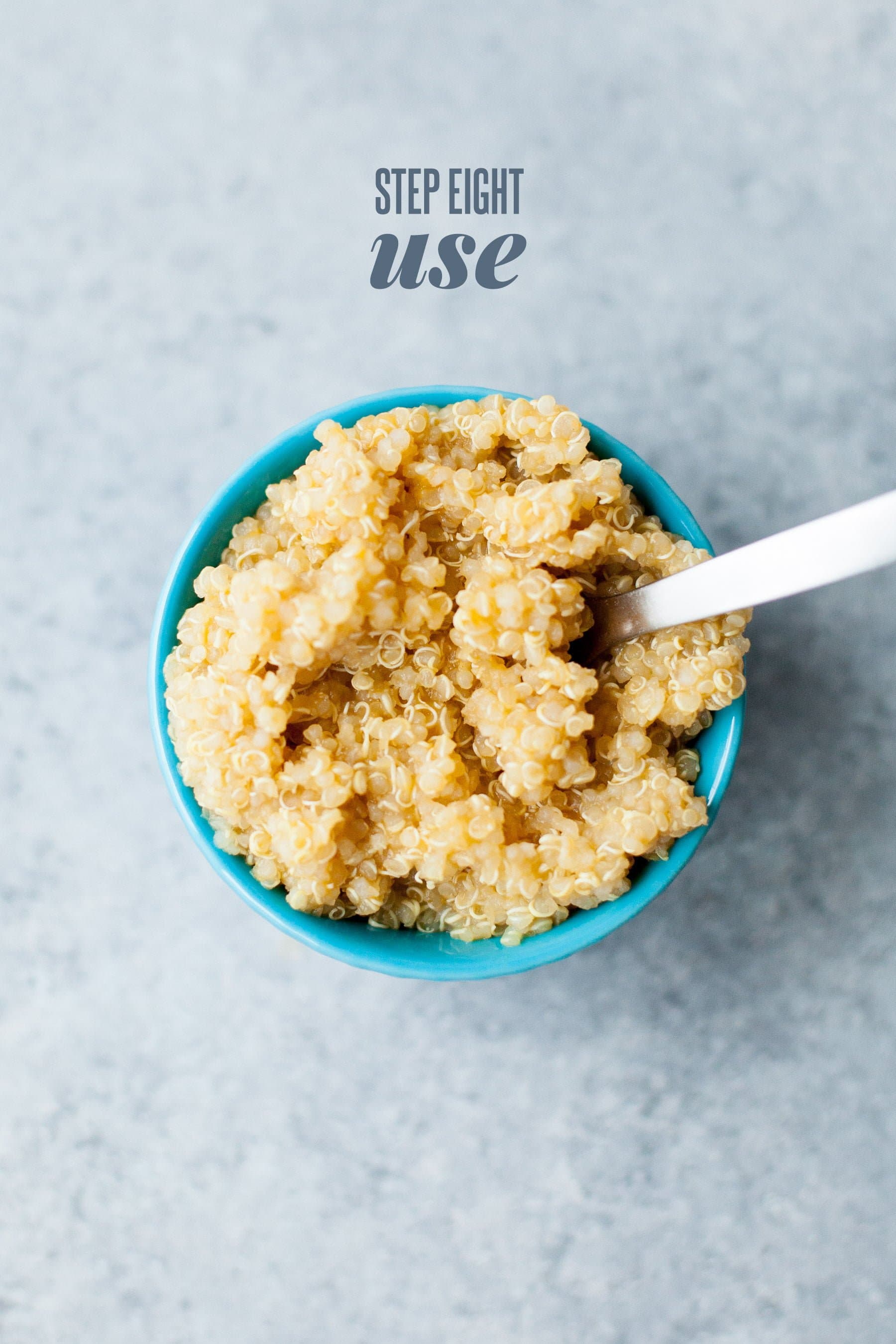 The rare times I’m on top of things, I take a bag out of the freezer the night before I’m going to use it and let it defrost in the fridge. Most often though, I just take it out and let it defrost on the counter about an hour or two before dinnertime. You could also defrost it in the microwave (I don’t have one, so if you guys do this, let me know what the stats/time are, and I’ll include it in this tutorial).

We normally just eat it room temp, but when we do want to heat it up, I place the defrosted quinoa in a saucepan with a lid (to keep it from drying out) just until it’s warm. Or, I’ll spread it out onto a quarter sheet pan, and warm it in my toaster oven for a few minutes. Again, you could nuke it, too! 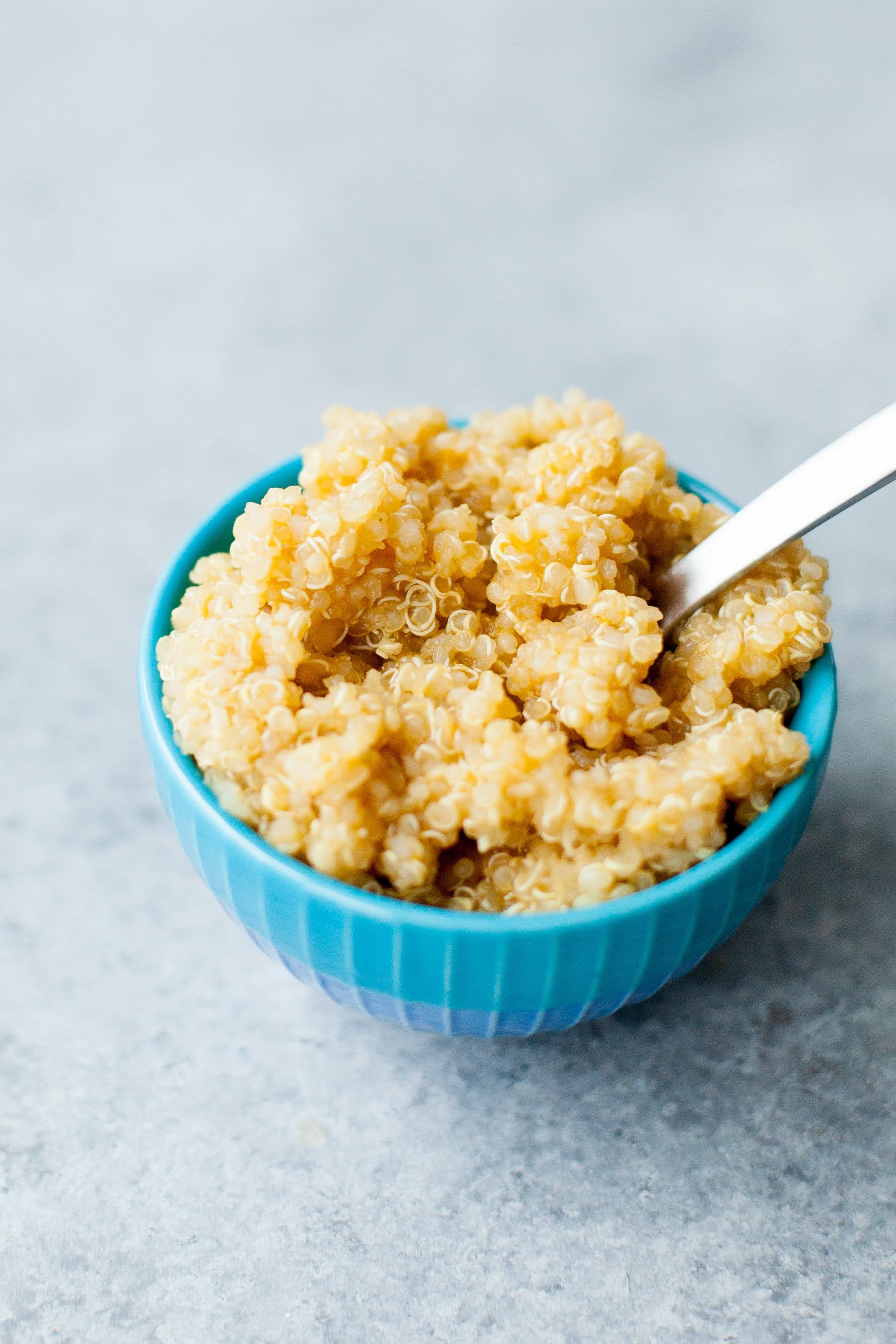 And that’s it! It doesn’t get much easier than that, does it? Here’s a printable version of the “recipe” (I hesitate to even call it that) for easy reference:

Double, triple, or even quadruple this recipe and freeze the extras in zip-top freezer bags.

This is a sponsored post written by me on behalf of Bob’s Red Mill. All opinions are entirely my own. Learn more about Bob’s Red Mill by following them on Twitter, Facebook, Pinterest, or Instagram. Or, visit their website to find stores near you that carry Bob’s products, or to print a coupon!

Want to be a sponsor? Let’s work together!