Meal Plans →
This post is brought to you by a Wholefully partner.
Recipe At-A-Glance
...
Gluten-Free6 hours, 30 minutes
These Slow Cooker Bacon Brown Sugar Baked Beans are a cozy, decadent, and affordable way to please a crowd of fans on game day
Jump Directly to Recipe 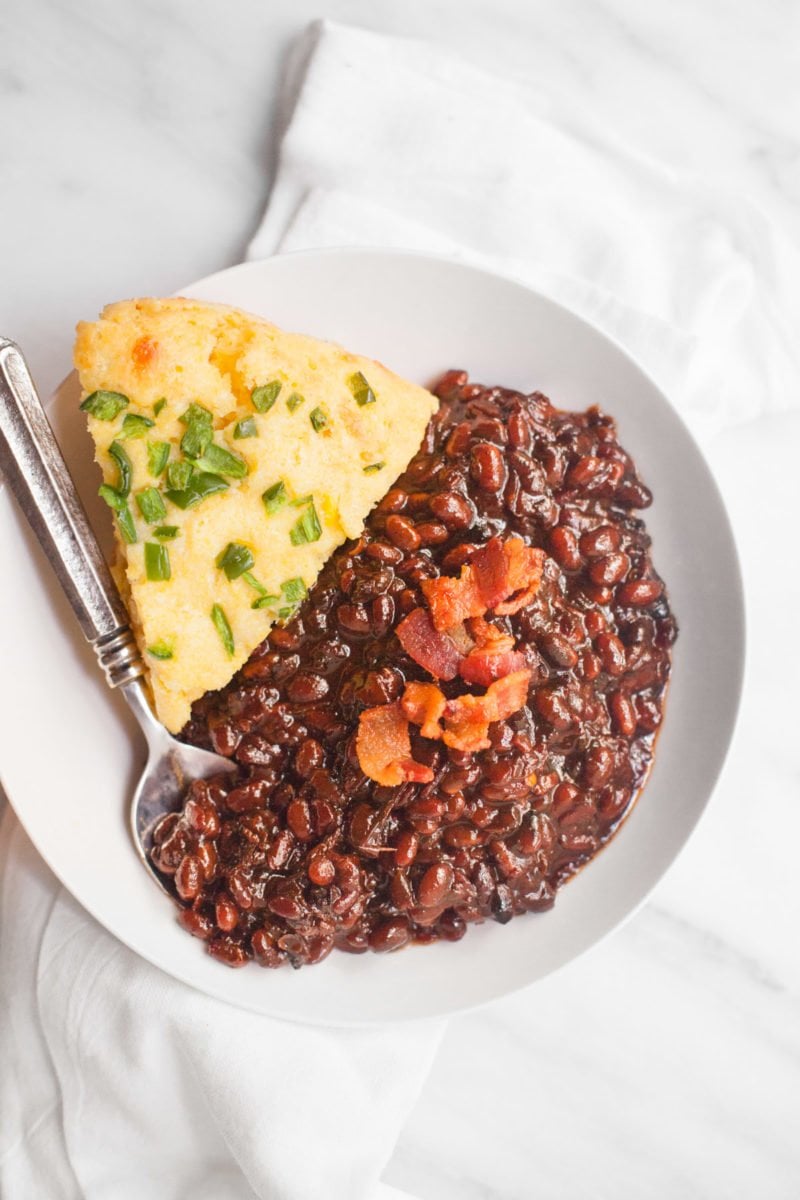 Guys. I don’t want to jinx it, but I think Fall might actually be here to stay. We’ve had the A/C off and the windows open for the better part of a week now. The leaves are starting to turn colors and the chickens are slowing down their laying (a sure sign that the days are getting shorter).

I know Fall is everyone’s favorite season, but I’m actually an equal-opportunity season lover—hence why I live in a place that gets all four of ’em. Although, I have to admit, I am particularly jazzed for the cooler temps this year. Summer is wonderful—and if I had to pick, I’d say I’m a summer girl—but I’m about half past over the bugs and poison ivy and humidity. It was a good run, sunshine and warm weather, but I’m ready to wear my scarves and boots full-time, k? 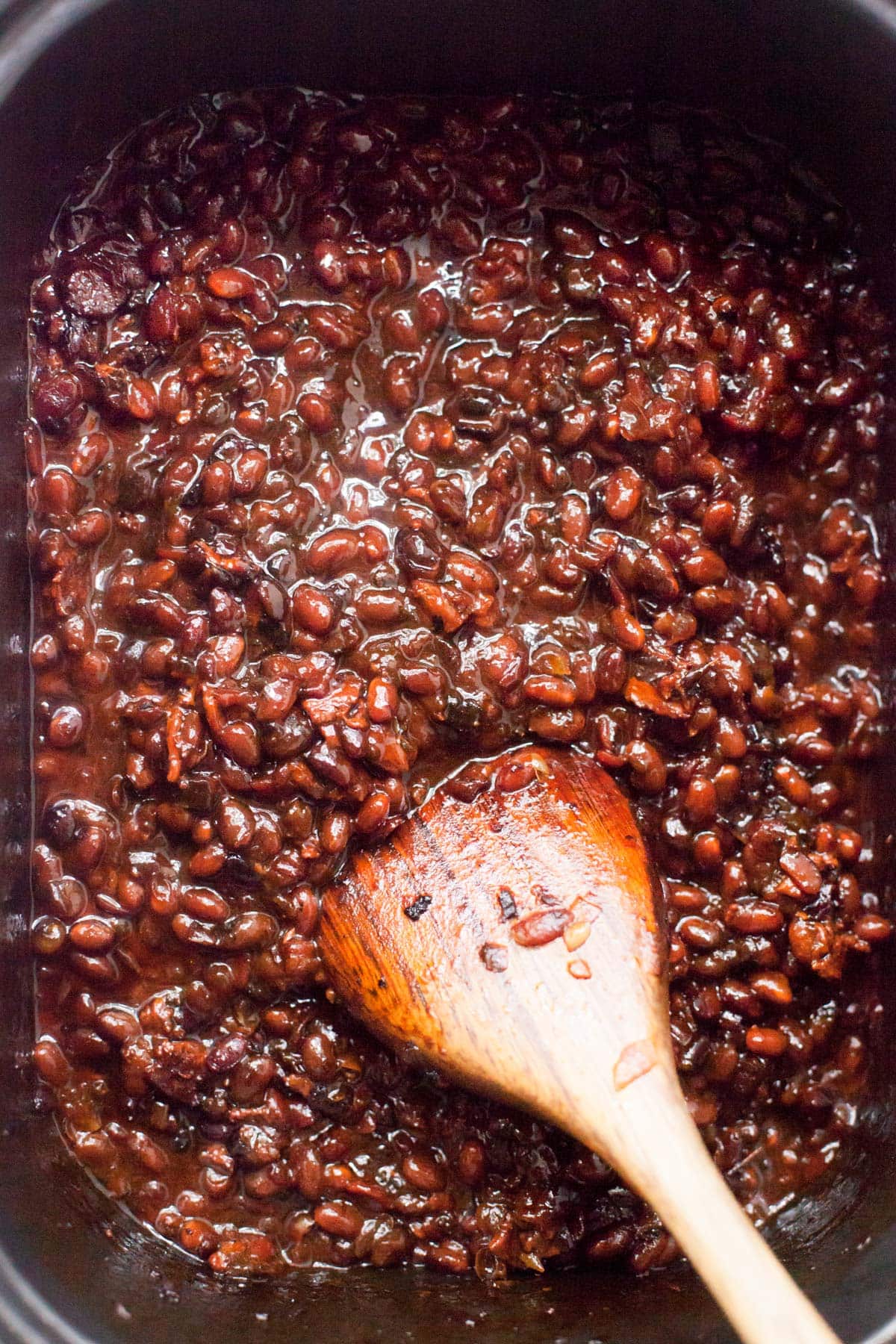 Another sure sign that Fall is here in our house? Hockey season has started (well pre-season anyway)! I know everyone’s all jazzed about football, and we’ve been watching our fair share of the gridiron, too, but we’re definitely more of a hockey (and college basketball) household.

This probably comes as no surprise, considering my husband is Canadian (he’s actually from the city with the highest number of NHL players per capita—it’s kinda in the water there). I never got into hockey until we were married, but it was love at first watch! 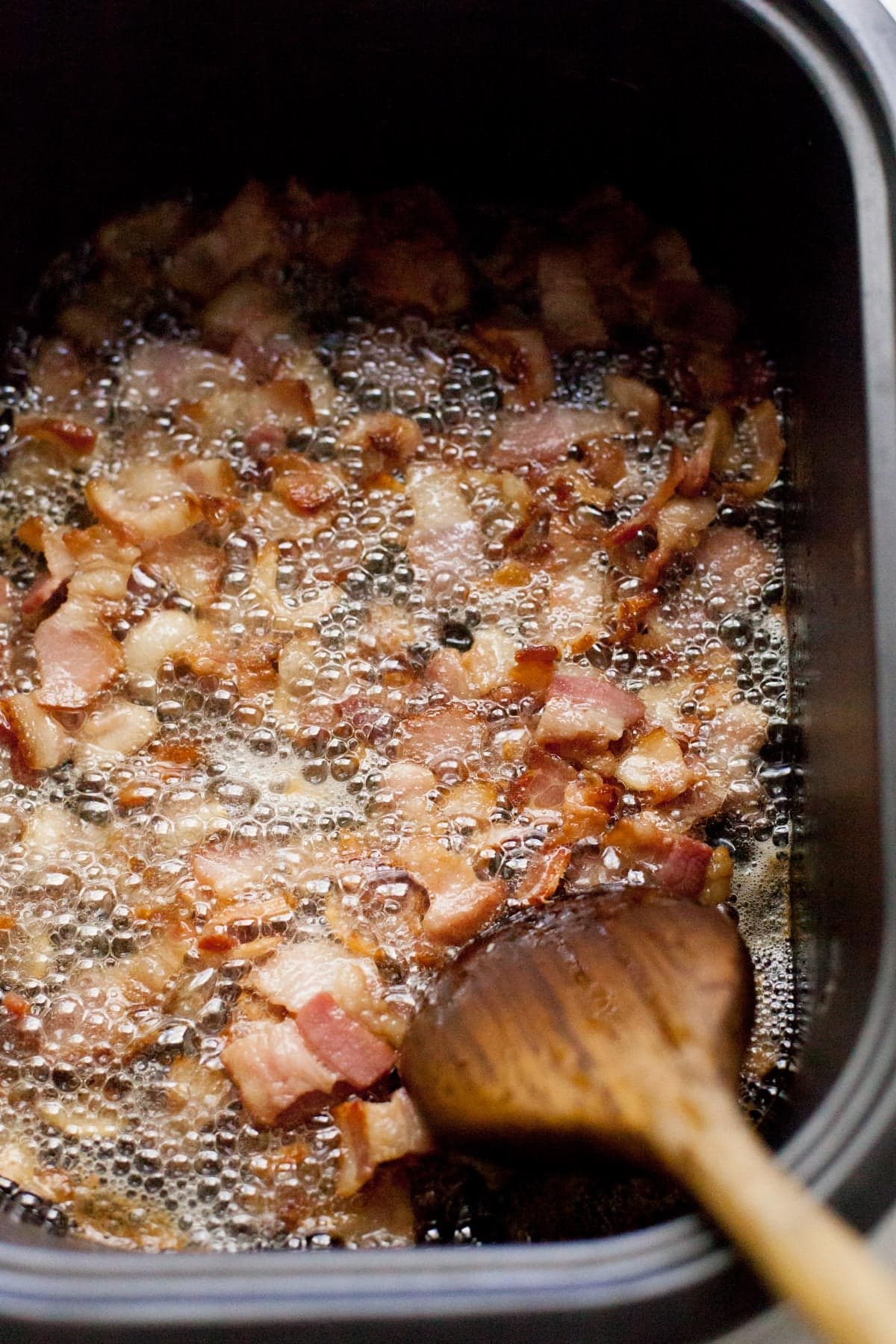 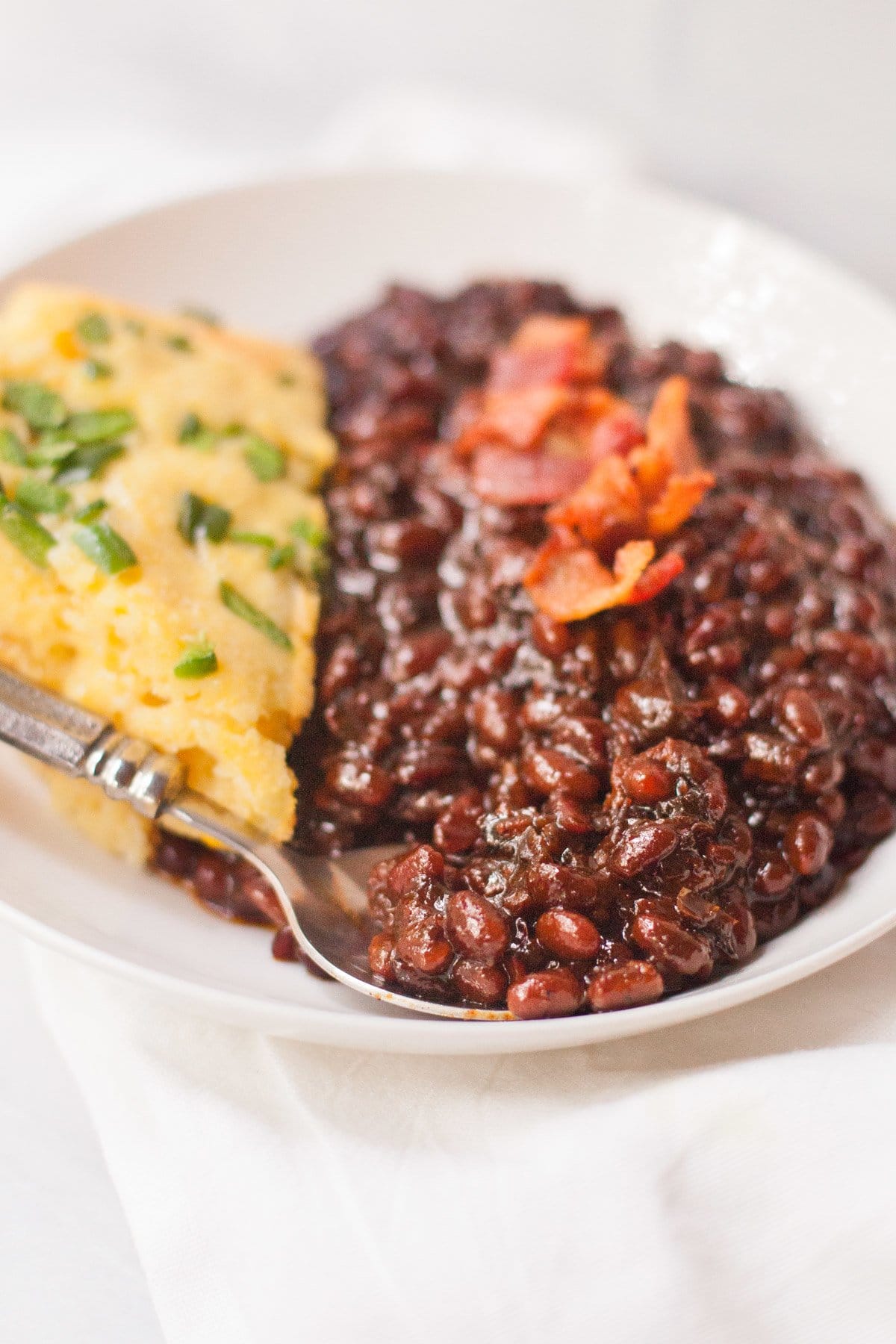 I love watching sports for lots of reasons, but I think the ritual of being a sports fan is my favorite part—to me, there is just something so inherently cozy about curling up to a hockey or football or basketball game on a Saturday night.

A lot of it is how I grew up—we were a sports-watching family, so a lot of my best memories are huddled in a room with my parents and siblings cheering on our teams—but I think a big part of it is also the predictability of it all. There aren’t a lot of things I can say are a given in my life—you never know what is going to happen—but I am pretty certain I can predict that each Fall, I’m going to be able to turn on a football or hockey game (unless there is the whole pesky strike thing going on). I take a lot of comfort in that predictability. 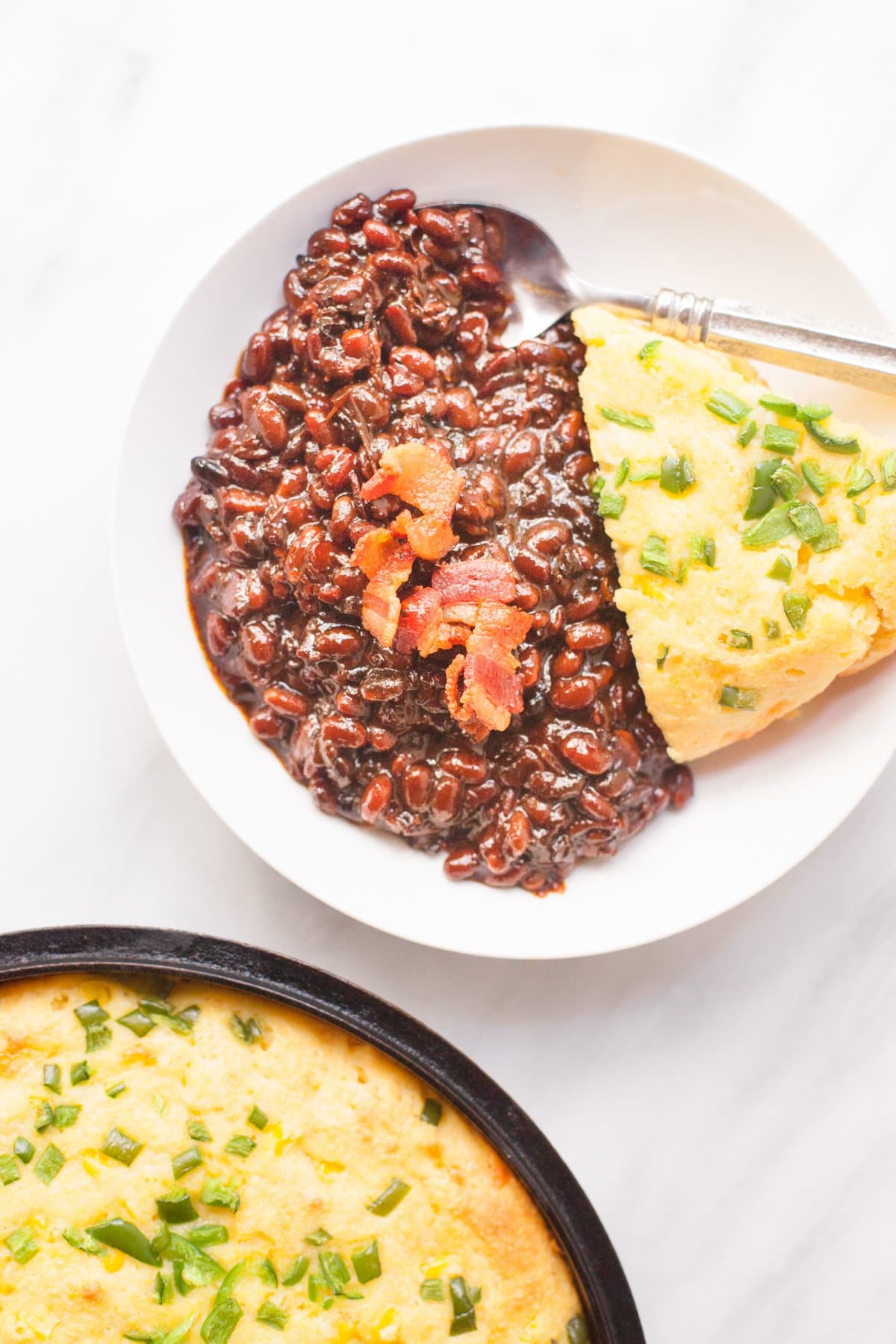 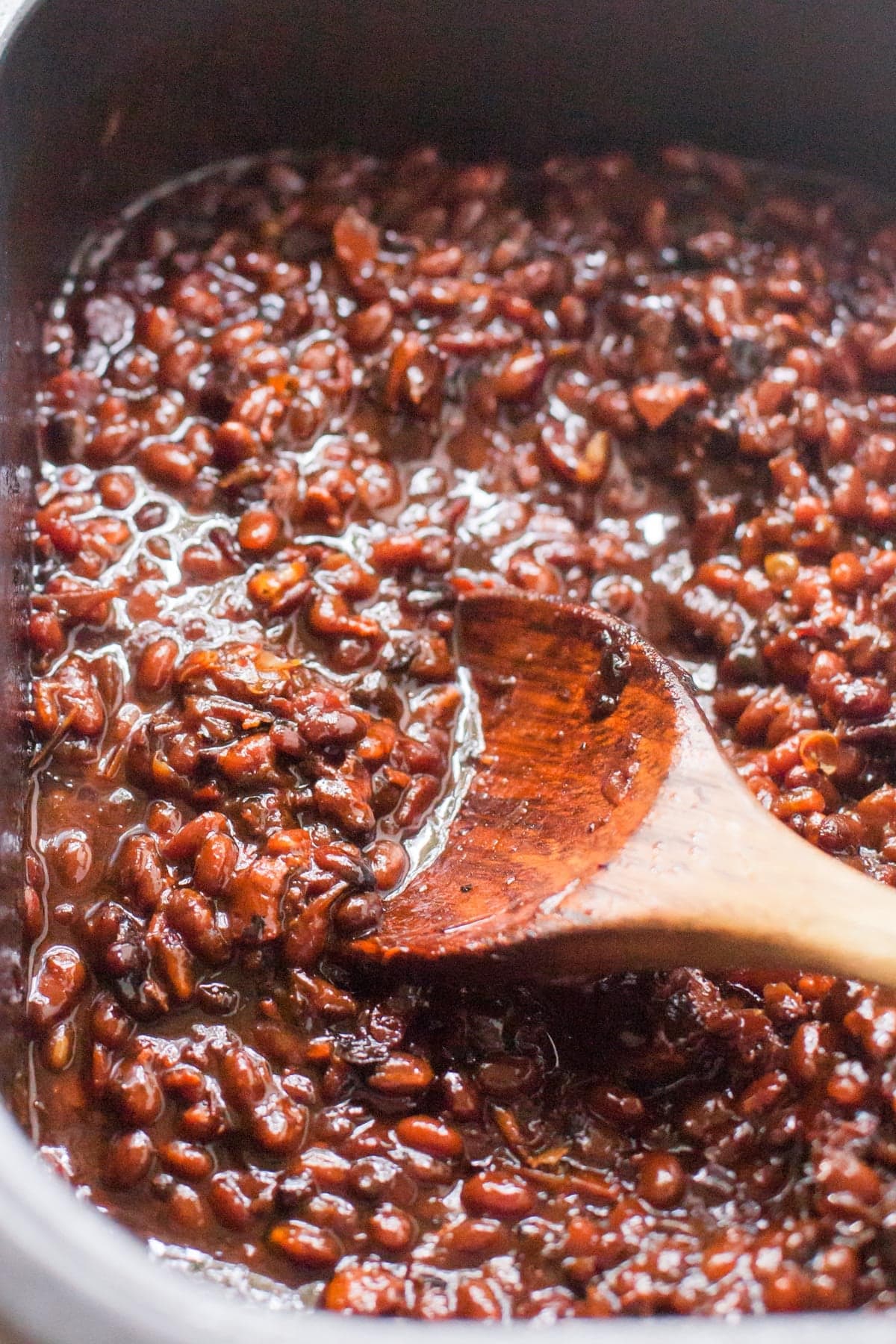 And, of course, good cozy food goes hand-in-hand with hockey (or football) watching. Now, I know baked beans aren’t typically considered a game day staple—and most folks even think of them as a side dish—but to me, baked beans are everything that a good, hearty game day food should be.

They are easy and affordable to make for a large crowd of sports fans. They are comforting, cozy, and decadent (especially with all that bacon). And my favorite part—the slow cooker is absolutely the perfect tool for cooking baked beans. I mean, I’m a big believer that you can cook almost anything in a slow cooker (barbecue ribs, anyone?), but baked beans are a case where you really shouldn’t use anything but a slow cooker. It’s the right tool for the job. 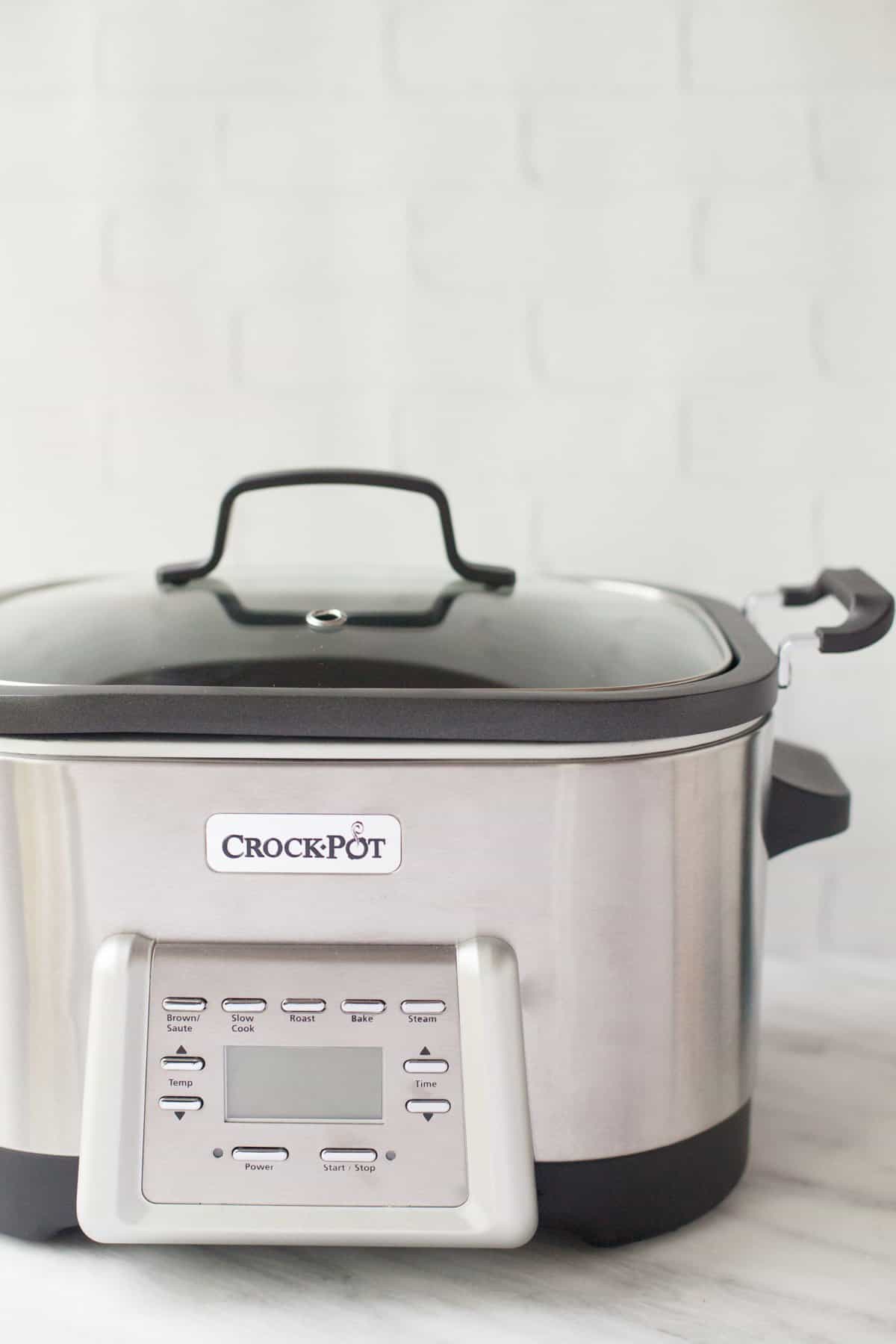 If you’ve ever tried to make baked beans (or any sort of sauce-based bean dish) using dried beans before, you may have run into the problem of your beans never getting soft, even if you pre-soaked them. When dried beans mix with acid, the cooking time is greatly increased. That means you want to skip adding any tomato-based products until your beans have been adequately softened. That’s why the recipe for these baked beans has you adding the acidic ingredients after a few hours of cooking. (Also, the older the beans, the longer it takes to soften them—beans over a year old might never soften.)

Also, this recipe calls for Navy beans, but you could sub in other beans. If you choose to use kidney beans, make sure to bring them to a full, rolling boil on the stovetop for 10 minutes before adding them to the slow cooker. Most slow cookers do not get hot enough to safely cook kidney beans—they have a toxin in them that can make some folks feel pretty yucky if not cooked at high enough temps. Worth noting, the Crock-Pot® 5-in-1 Multi-Cooker I use (and looovveee!) has a sauté setting that gets hot enough to bring dishes to a full rolling boil. So if you’re using this slow cooker, you’re fine to use kidney beans!

We served up these beans with a batch of the Jalapeño–Cheddar Cornbread that’s in my first cookbook. Enjoy! 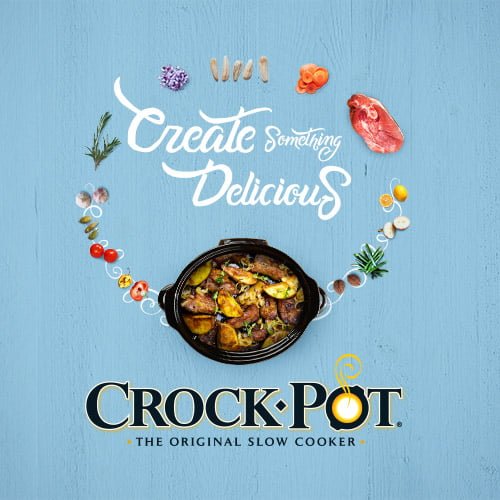 This post is brought to you by a Wholefully partner.
This is a sponsored post written by me on behalf of Crock-Pot® brand. All opinions are entirely my own. Don't forget to visit the Crock-Pot® brand website to see all of their delicious slow cooker recipes!
Want to be a sponsor? Let’s work together!