Meal Plans →
Recipe At-A-Glance
...
Gluten-Free30 min
Grilled corn on the cob is one of the summer's best treats. Turning out a batch that's perfectly grilled doesn't have to be a challenge. Follow this advice for easy grilling.
Jump Directly to Recipe 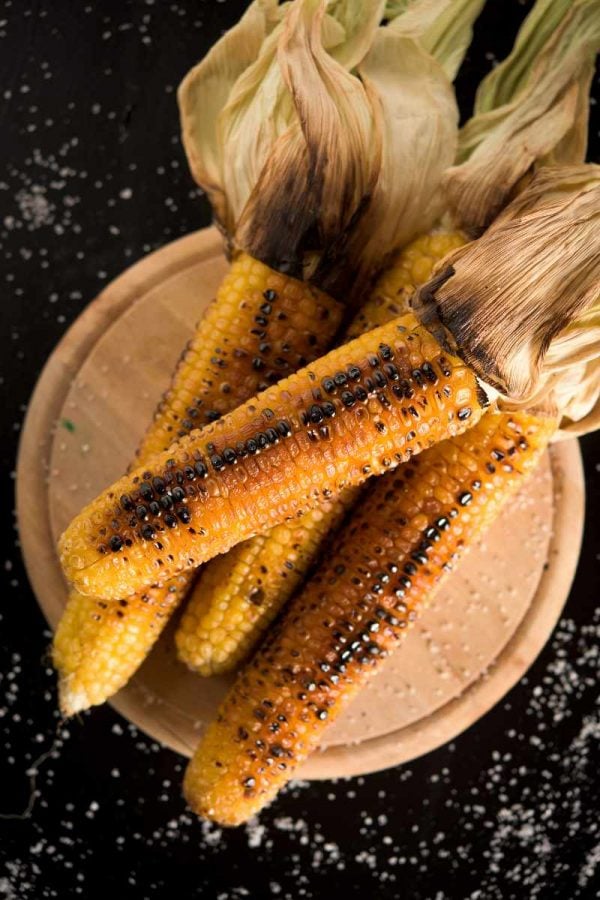 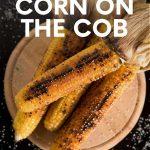 Cooking delicious, nourishing meals is a breeze in the middle of summer when the produce is fresh, tasty, and abundant! When sweet corn is in season, we gobble up as much of it as we can, and this grilled corn on the cob recipe is one of our favorite ways to prepare it because this method is just so darn easy. The charring from the grill helps bring out the sweetness of the corn, and our steam-in-the-husk method helps you get perfectly tender kernels every time. Let’s get grilling! 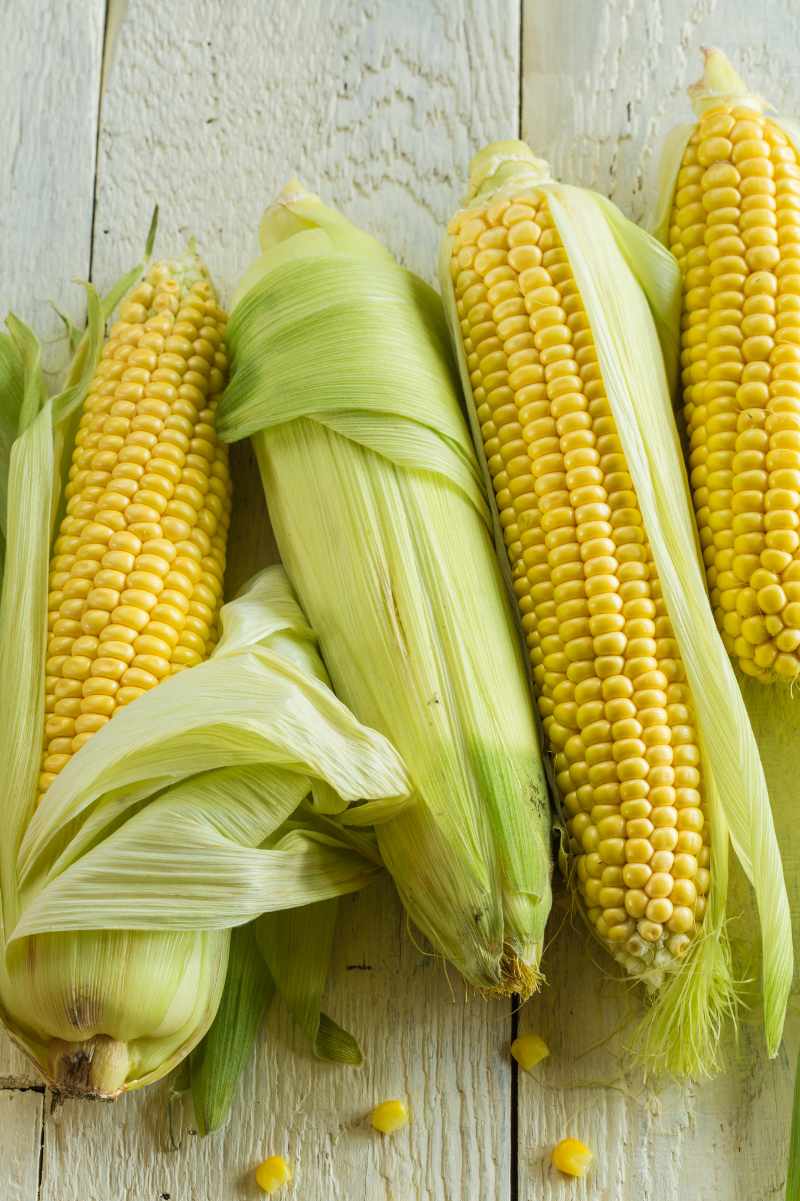 Picking a good ear of corn

For the best grilled corn, you need to start with the best fresh corn! Whether you’re at the farmers’ market, in the grocery store, or in your garden, here’s what to look for:

Many folks will peel back a little bit of the husk to get a peek at the kernels before buying. We get the instinct, but this can leave the corn you leave behind to dry out or be exposed to insects. Unless the farmer or market you are buying from specifically says pulling back the husk is okay, we recommend you stick with our methods above.

Do you have to presoak corn before grilling?

You don’t have to, and honestly, we typically skip the step in our house. But if your corn isn’t as fresh, presoaking the entire ear of unhusked corn in some warm (not hot) water for at least 15 minutes can result in plumper, more tender corn. 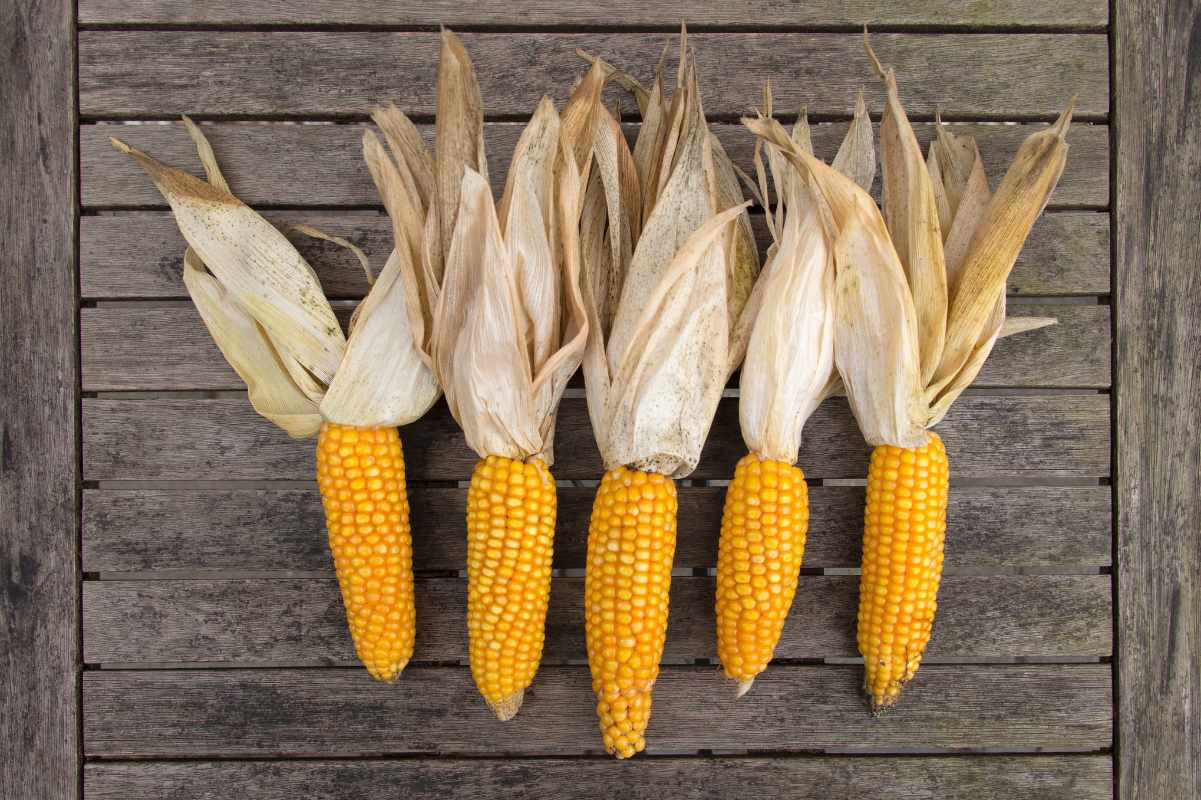 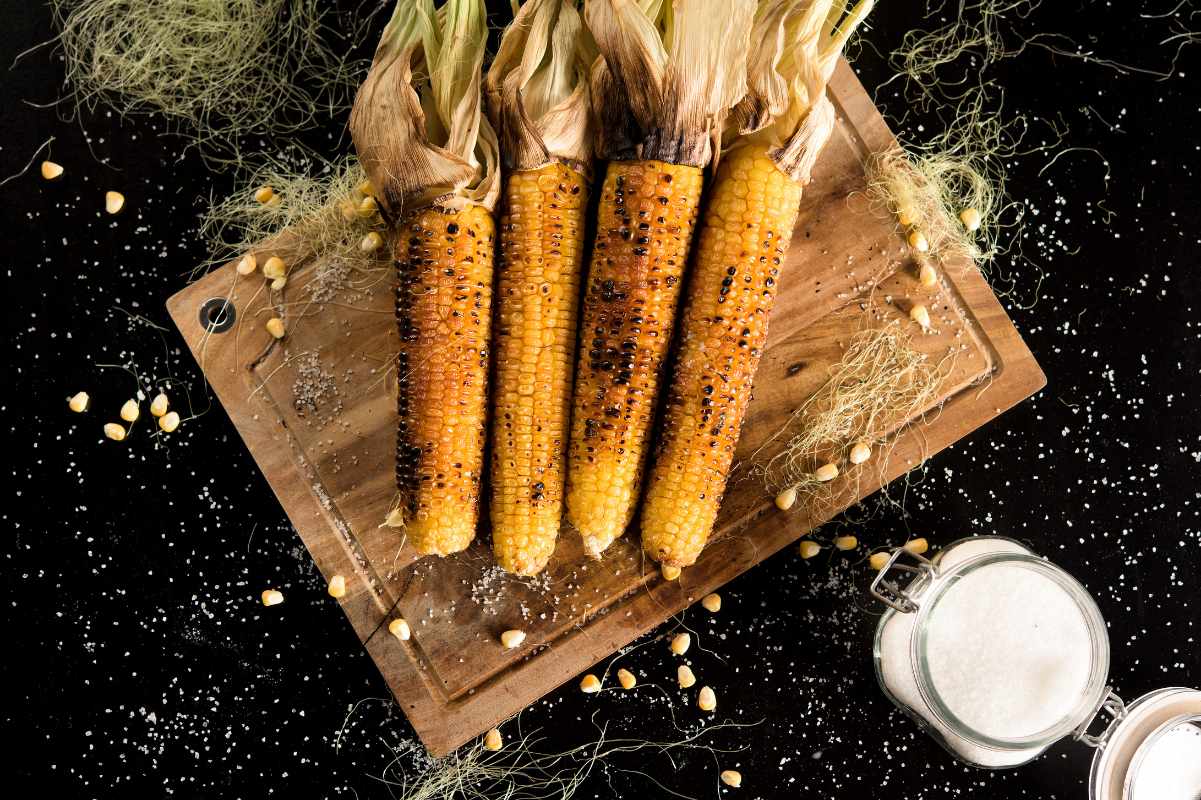 Can you make grilled corn on the cob without boiling first?

Absolutely! Corn on the cob gets cooked through well enough on the grill that there is no need to boil it first. The grill will take care of it all!

Is it better to grill corn with or without husks?

Neither is necessarily better than the other—it all depends on what you want from your corn! Leaving the husks on the entire time allows the corn to steam, making for tender corn kernels. Removing them gives the corn a chewier texture and charred, smoky flavor. For corn that is the best of both worlds, you can place the corn on the grill with husks on for about 5-10 minutes to steam, and then carefully pull back the husks just to char the kernels at the end of the cooking time. 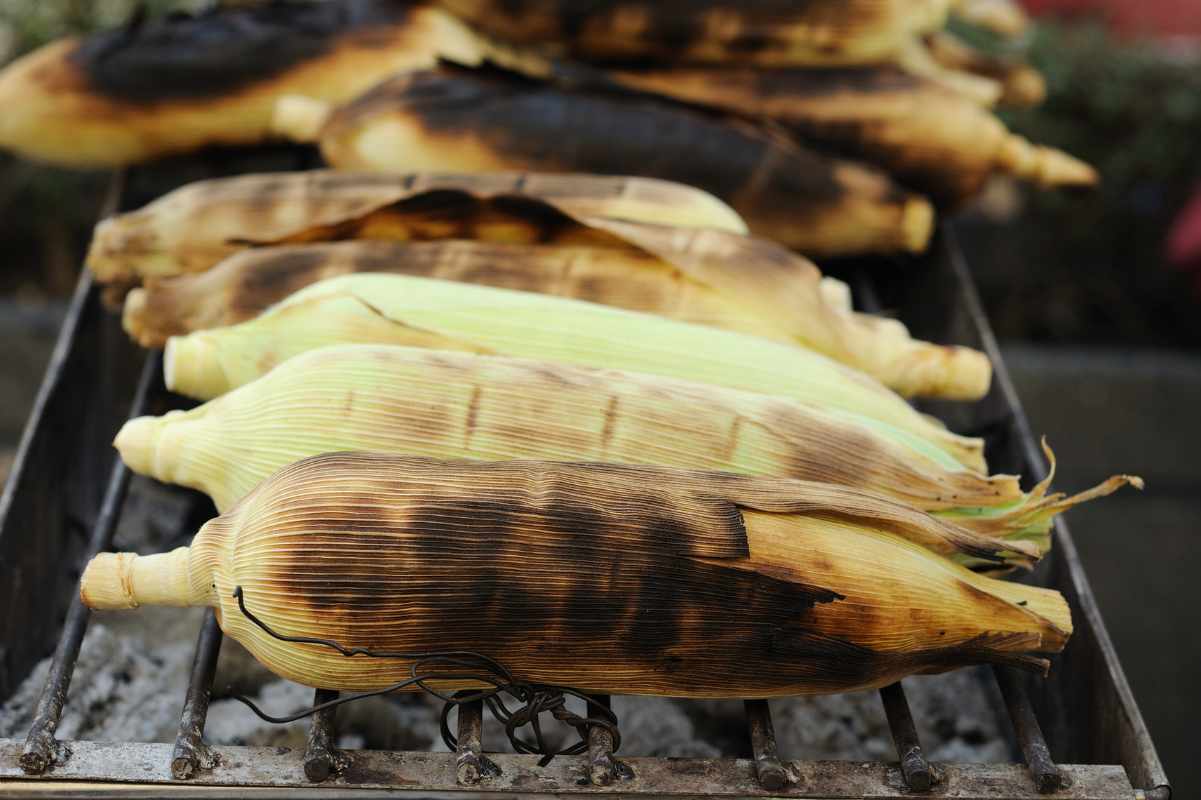 How to cook corn

There are tons of ways to make grilled corn on the cob, but our favorite way is with the husks still attached. Not only do you get to skip the foil (which cuts down on waste and spending!), but it also gives you succulent, juicy kernels. Here’s what we think is the best method:

How do you know when corn is done on the grill?

Corn on the cob is done cooking when the kernels have turned bright yellow underneath the char and feel tender to the touch. You’ll be able to smell it when it is done or close to it, too—grilled corn smells like popcorn! 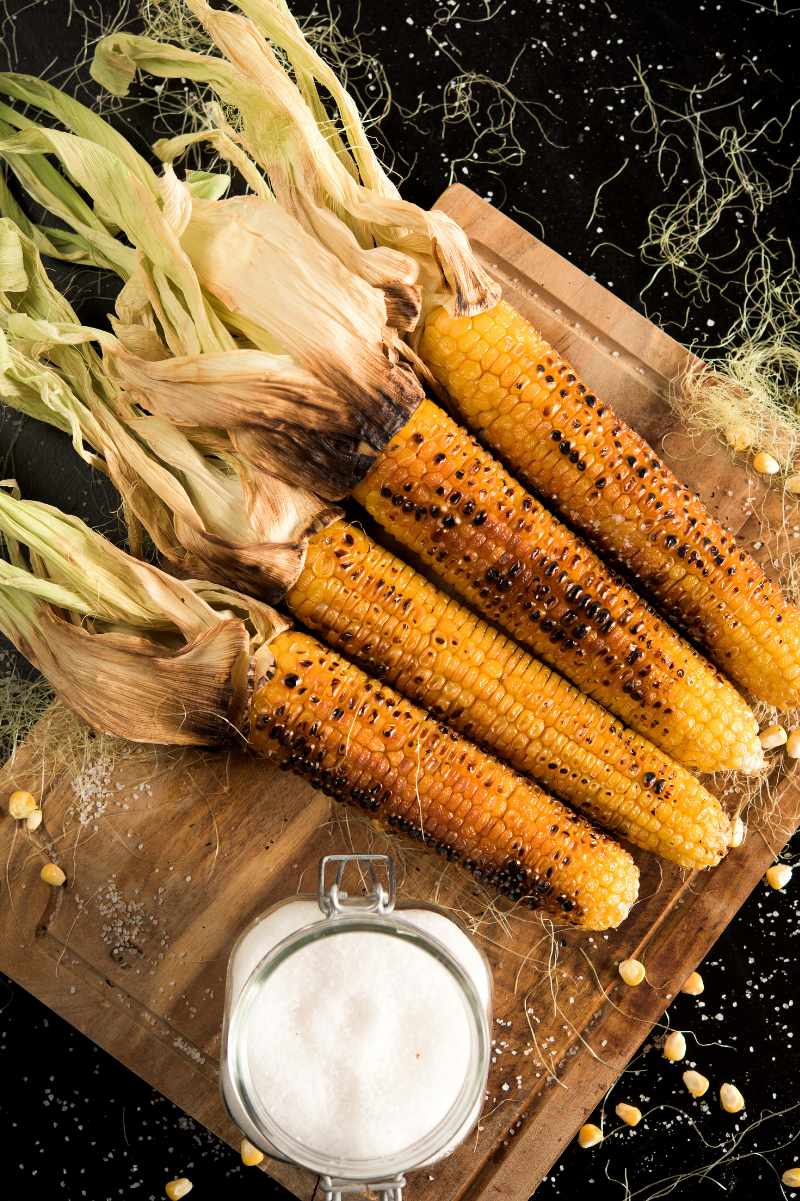 Can you freeze grilled corn on the cob?

You sure can! We like to grill some extra every time we make grilled corn on the cob specifically for freezing. It is so easy, and the taste is so much better than what you’d get from grocery store frozen corn. Plus, the grilled kernels add a smoky flavor to whatever soups, salads, or tacos we’re making.

To freeze grilled corn on the cob, you can skip the blanching (since the kernels are already cooked). Just slice the kernels off the cob, pack them into freezer bags or containers, squeeze out any extra air, and freeze until ready to use.

How can I use grilled corn?

Our favorite way to eat grilled corn on the cob is as-is, fresh off the grill! But if you want to work the corn into some recipes, here are some of our favorites:

1. Preheat the grill to medium-high. Peel back the husks of the corn and remove the silks. Fold the husks back up over the kernels.

3. Peel the husks back again, and spread the butter or olive oil over the tender kernels.

4. Season with salt and pepper. Increase the grill to high heat (though if you are working with a charcoal grill and this is time-consuming, you can do the next step at medium-high heat as well).

5. Put the unwrapped corn back on the grill to char, cooking for about 1 minute per side.