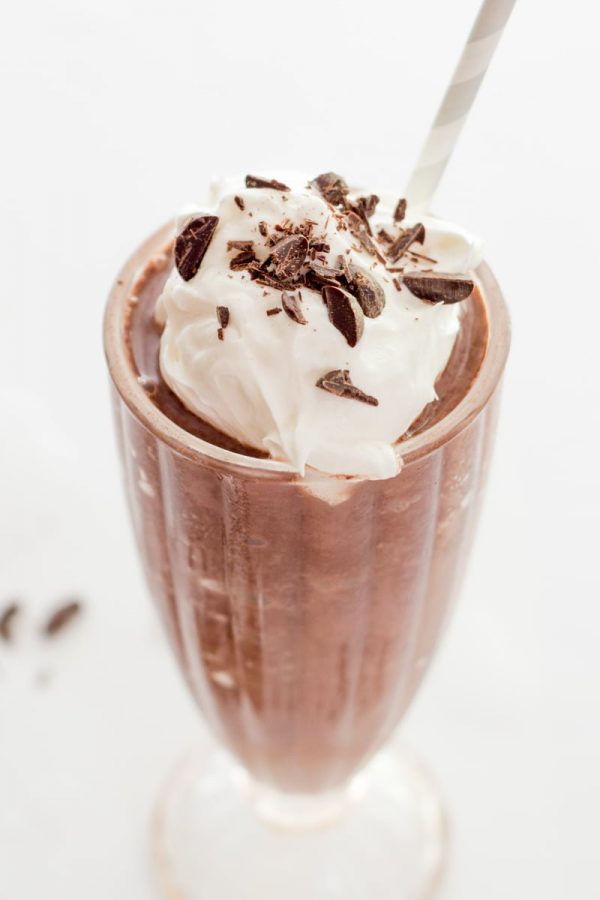 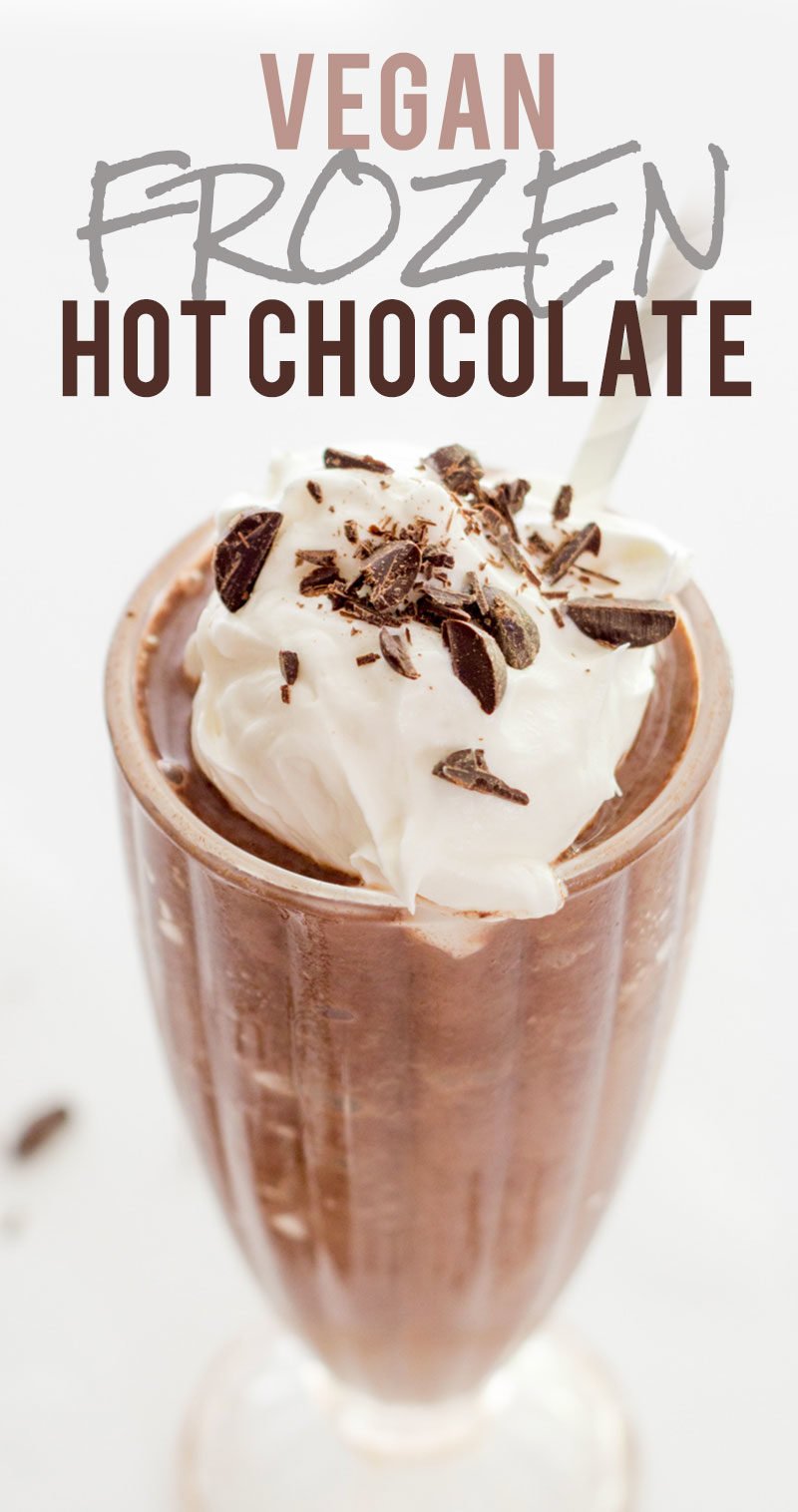 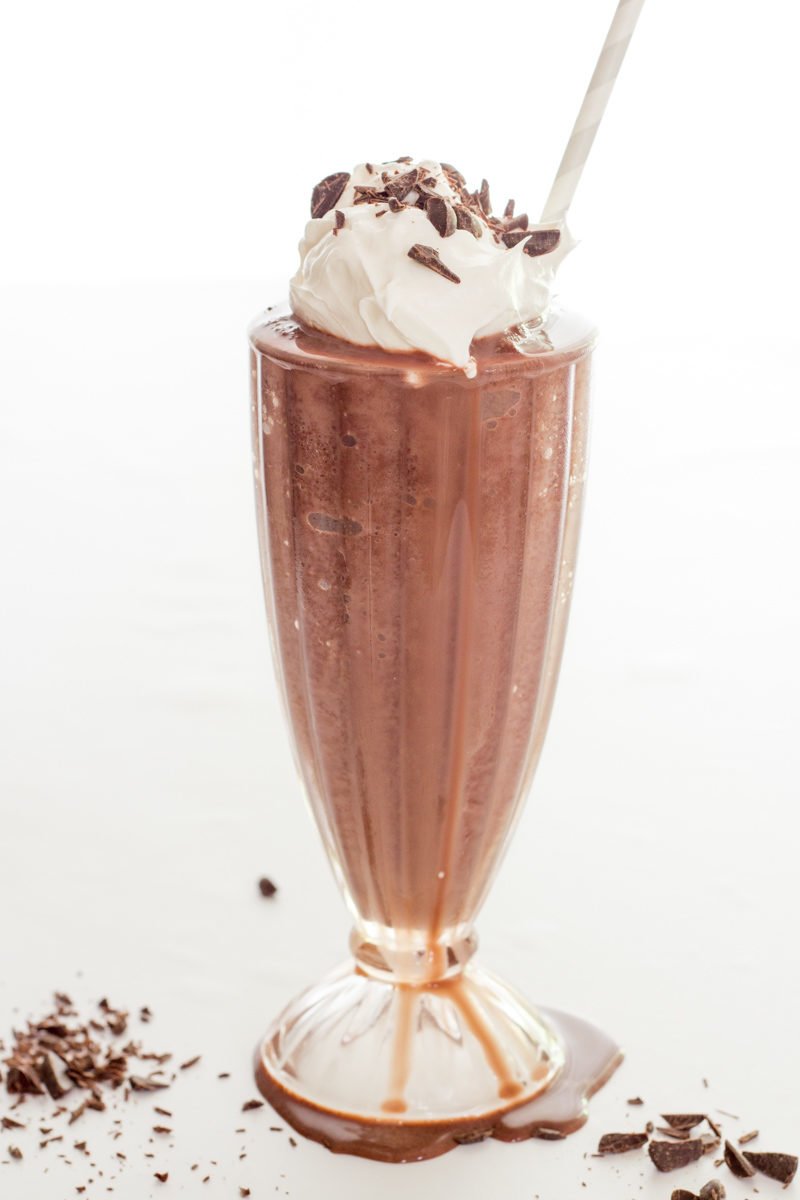 This post is brought to you by a Wholefully sponsor.

This Vegan Frozen Hot Chocolate is a great way to enjoy your favorite cozy beverage in the middle of summer! Adjust the chocolate level and sweetness to your liking.

Frozen hot chocolate has become enough of a thing, that a few times this summer, my dear husband has seen it on a menu or a blog, and the title has spiraled him into a diatribe about how the name makes ABSOLUTELY NO SENSE AT ALL.

He just says that it is cold chocolate milk, but colder. Which, really, is totally true. But colder chocolate milk doesn’t sound nearly as decadent and fancy as frozen hot chocolate, does it? The truth is, the name tells you exactly what it is—a creamy, chocolatey drink like hot chocolate, but FROZEN. Like with ice and stuff. Perfect for summer! 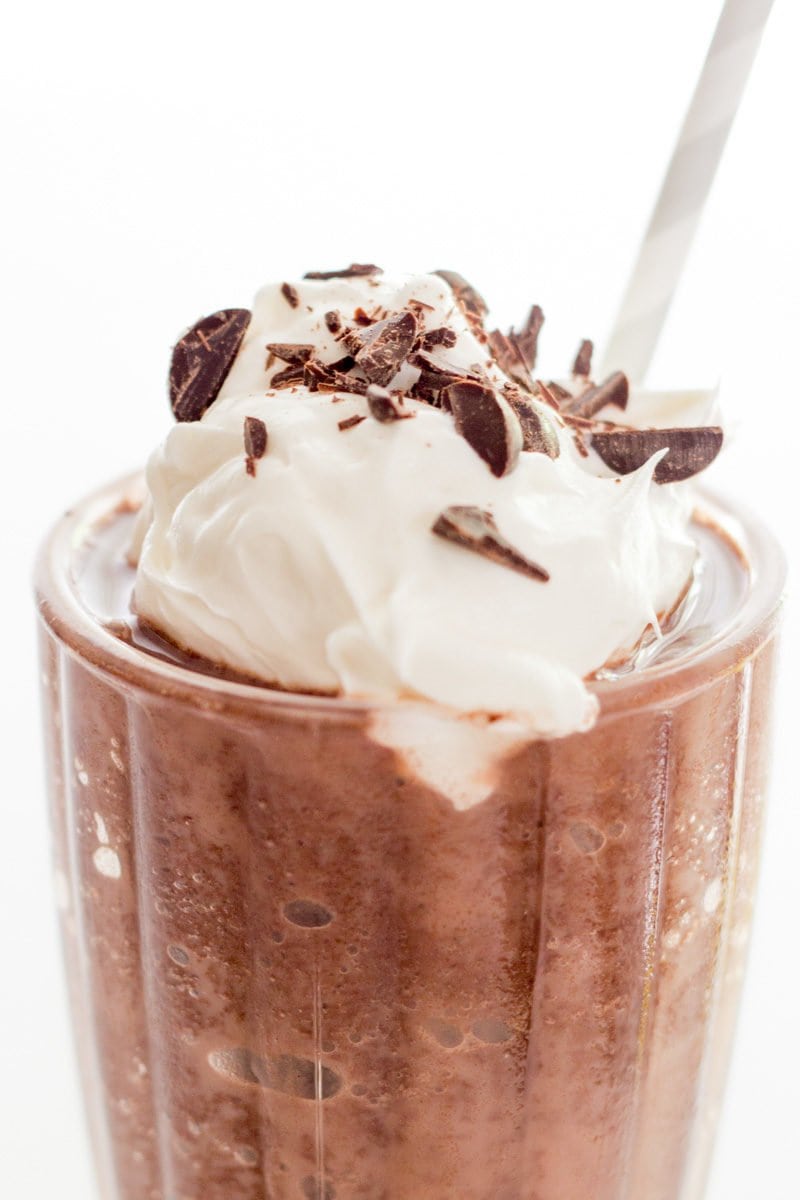 There are a ton of frozen hot chocolate recipes out there, and some of them are even a little complicated (I mean, really, who wants to get out a double boiler to make a frozen drink in the middle of July?), but my version? It’s pretty much as simple as can be.

It’s five ingredients total—and that’s including if you want to put coconut whipped cream on top. This recipe requires absolutely no heating, and all the elements can be made ahead of time and kept handy for whenever you’re craving a frosty, chocolately treat. 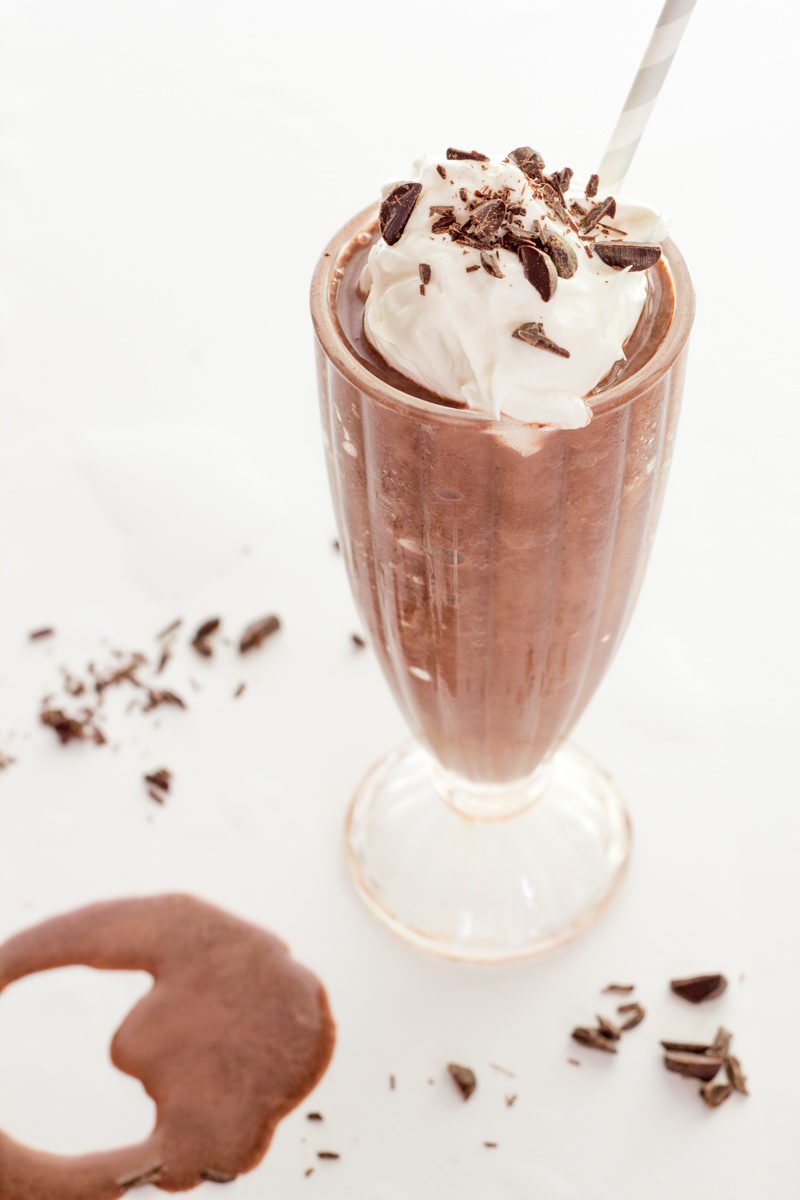 The key to keeping this super easy breezy? Almond Breeze Chocolate Almondmilk. This almondmilk is such a tasty choice for quick summer desserts like this. Super creamy, chocolatey, and a little bit sweet, it works wonderfully as a base for this frozen hot chocolate. I actually use it in two forms in this recipe—frozen into ice cubes and chilled.

If you end up loving this recipe as much as I do, I recommend freezing up a few trays of Almond Breeze ice cubes and storing them in a zip-top bag in the freezer you can quickly make this treat whenever you’re craving it. Not only is it awesome in this recipe, but it’s also a fantastic addition to your morning iced coffee (trust me, you want to try it). 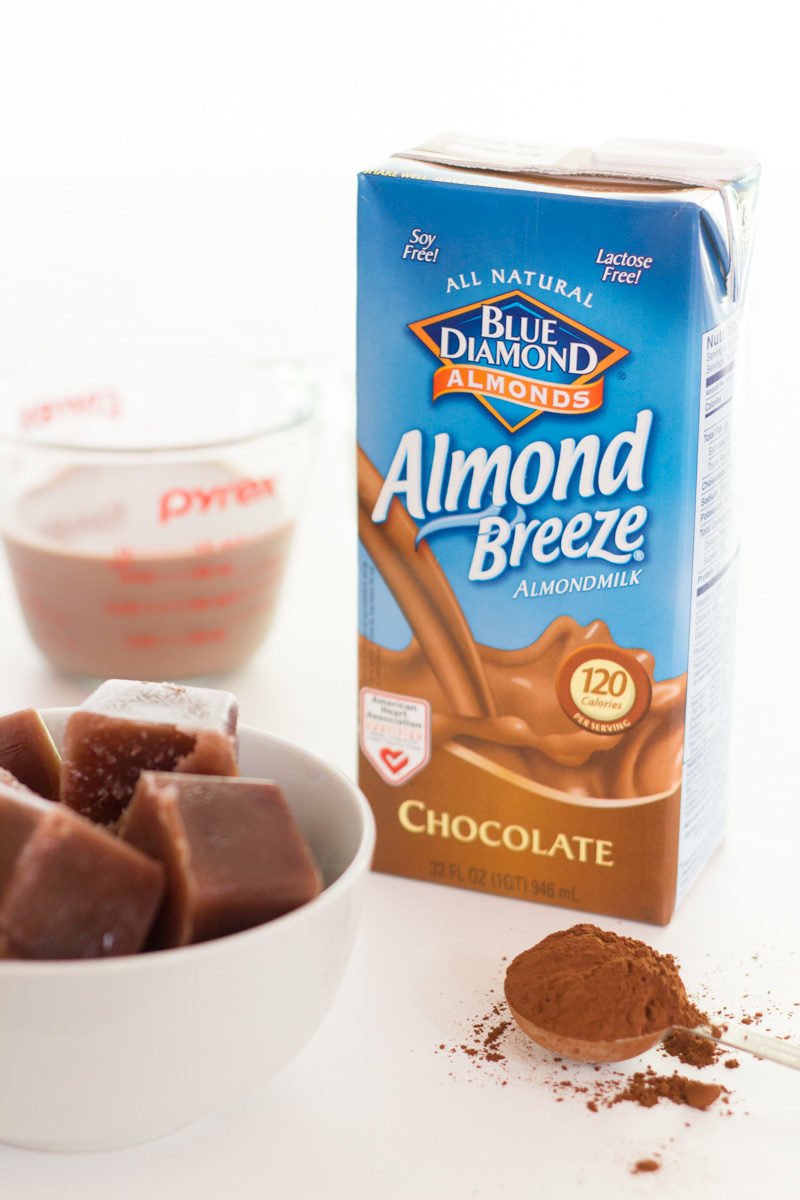 My version of frozen hot chocolate just happens to be vegan—and it works wonderfully well! I use maple syrup to sweeten the mixture just a touch, because I like the hint of maple flavor with the chocolate, but if you aren’t avoiding animal products, you could also use honey. It would be equally delicious!

Those of you who aren’t plagued with a raging sweet tooth might even be able to get away with no sweetener at all—just taste as you go. 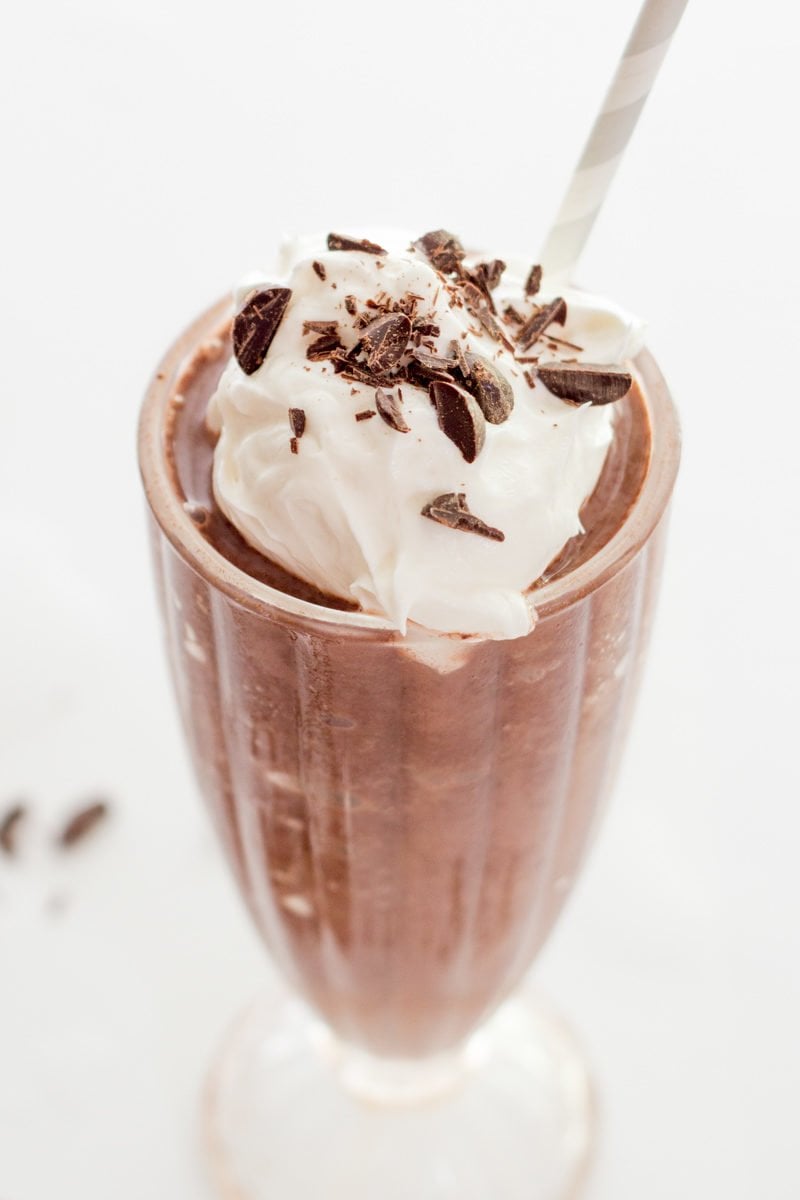 I also added in a heaping scoop of Dutch processed cocoa to make this really nice and rich. You can use either “regular” or Dutch-processed cocoa, but I prefer the Dutch-processed cocoa in raw applications like this because it is a lot less acidic and sharp. It’s just a touch of a mellower flavor—it doesn’t have that bite that you can sometimes get from regular cocoa. More of a milk chocolate fan? Ain’t no thang. Just leave out the cocoa all together. Enjoy!

For the Frozen Hot Chocolate:

Prep time does not include time to freeze Almondmilk. 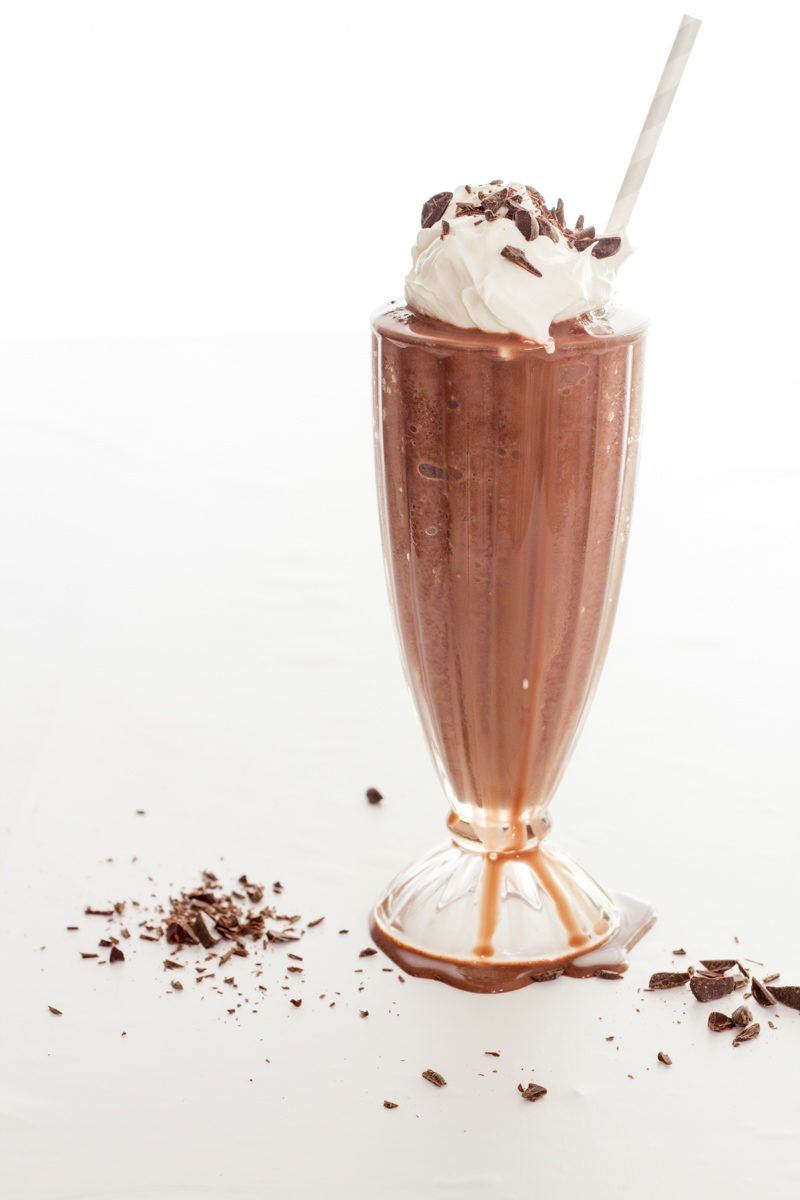 Almond Breeze offers a rich, delicious, lactose-free milk alternative with no saturated fat and no cholesterol. Pour it on cereal, drink it by the glass, or add it to your favorite smoothie.

Want to be a sponsor? Let’s work together!