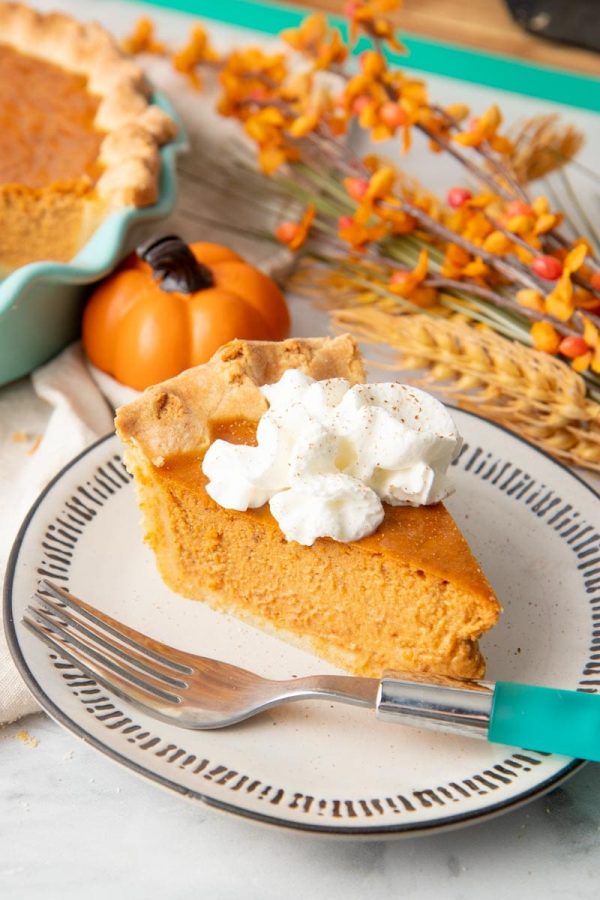 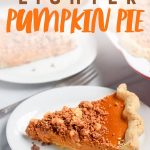 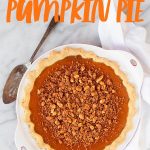 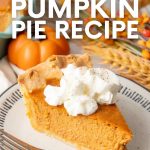 If you’re looking for a tried-and-true pumpkin pie recipe to wow your guests this Thanksgiving, you’ve found it! This recipe has been passed down in my family for generations. It’s been made and tested at hundreds of family-gatherings by dozens of cooks (both novice and expert), and the results are always smooth, creamy, decadent, and totally fool proof.

This pumpkin pie recipe has it all: the warm pie spices, the silky-smooth creaminess thanks to our secret ingredient, and to top it all off, it can be made from start to finish in under an hour! It’s simple, delicious, 100% pumpkin perfection. Let’s get baking! 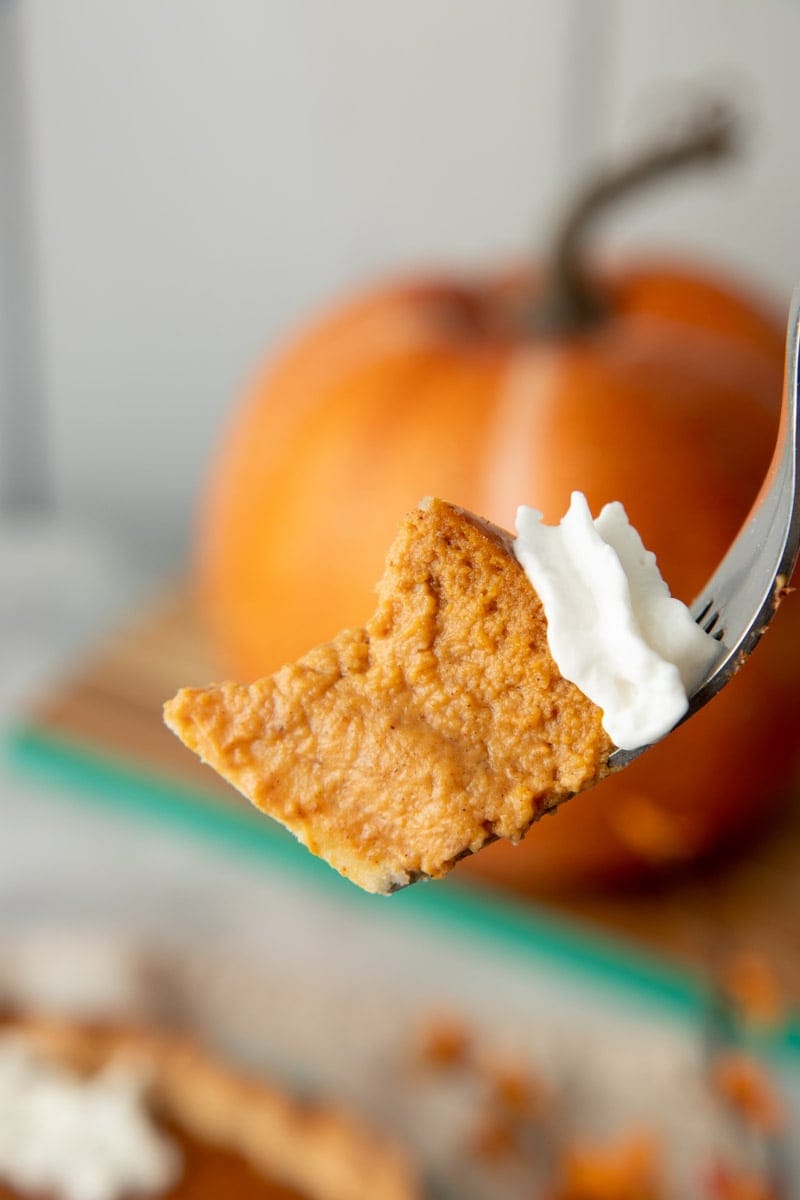 What makes this the best pumpkin pie recipe?

If you’ve ever made pumpkin pie from scratch before, you may have noticed that many recipes call for granulated sugar. Which, if you aren’t careful, can result in a gritty or sandy texture in your pumpkin pie—not good eats. Our recipe uses liquid sweetener (sweetened condensed milk to be exact) and is mixed together using a blender. This makes for the silkiest, dreamiest, creamiest pumpkin pie you’ve ever had! And it’s so easy that even a total baking beginner can have pie success.

Can I use pumpkin pie filling instead of pumpkin puree?

Canned pumpkin pie filling is pumpkin puree typically mixed with sugar and spices such as cloves, nutmeg, and cinnamon.

If pumpkin pie filling is all you have, you can use it, but then I’d recommend using the recipe listed on the can instead of following this recipe. Our recipe is tested to be used with pure pumpkin puree (either canned or homemade pumpkin puree). Pumpkin puree is 100% natural pumpkin with no additions. 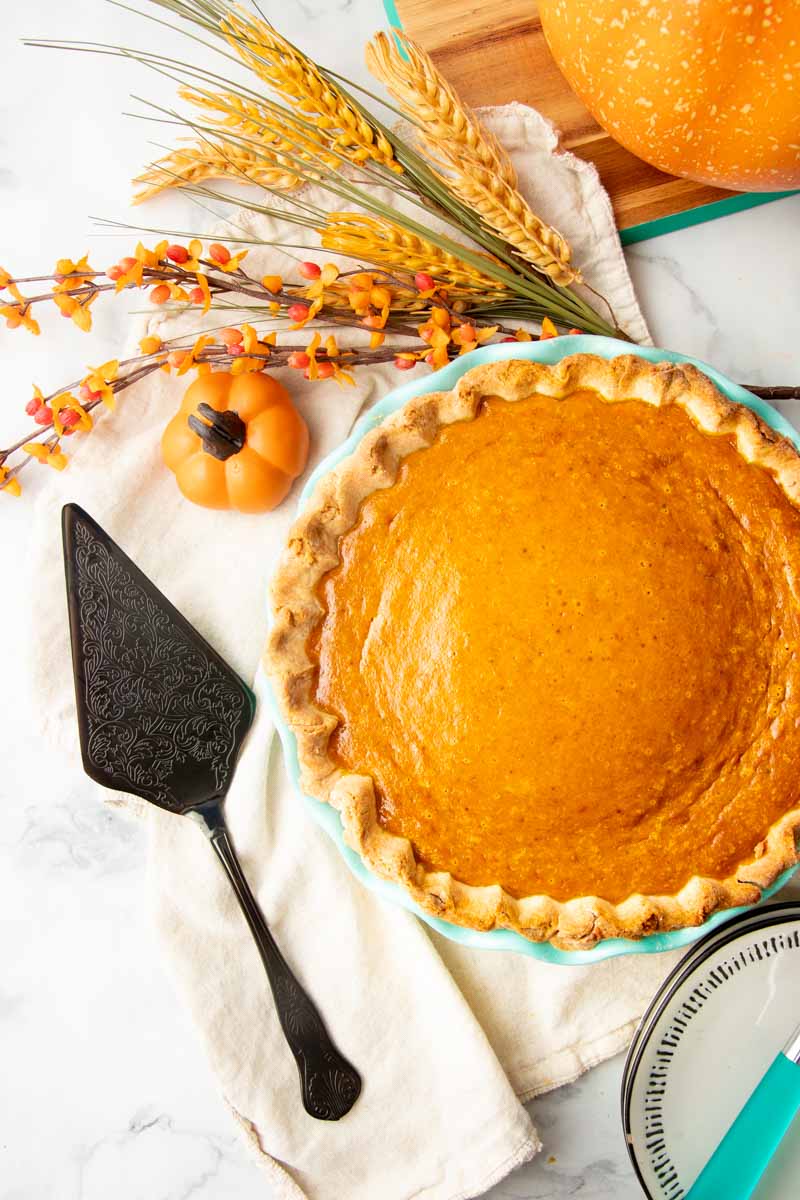 How do I make this with fresh pumpkin instead of canned pumpkin?

Easy peasy! Just follow our tutorial for homemade pumpkin puree and use that resulting puree in this pie instead of canned pumpkin.

The squash used in canned pumpkin is specially bred to be very bright orange in color. Your homemade puree might look more yellow in color, but it’ll be equally delicious!

What can I use as a substitute for evaporated milk and sweetened condensed milk? 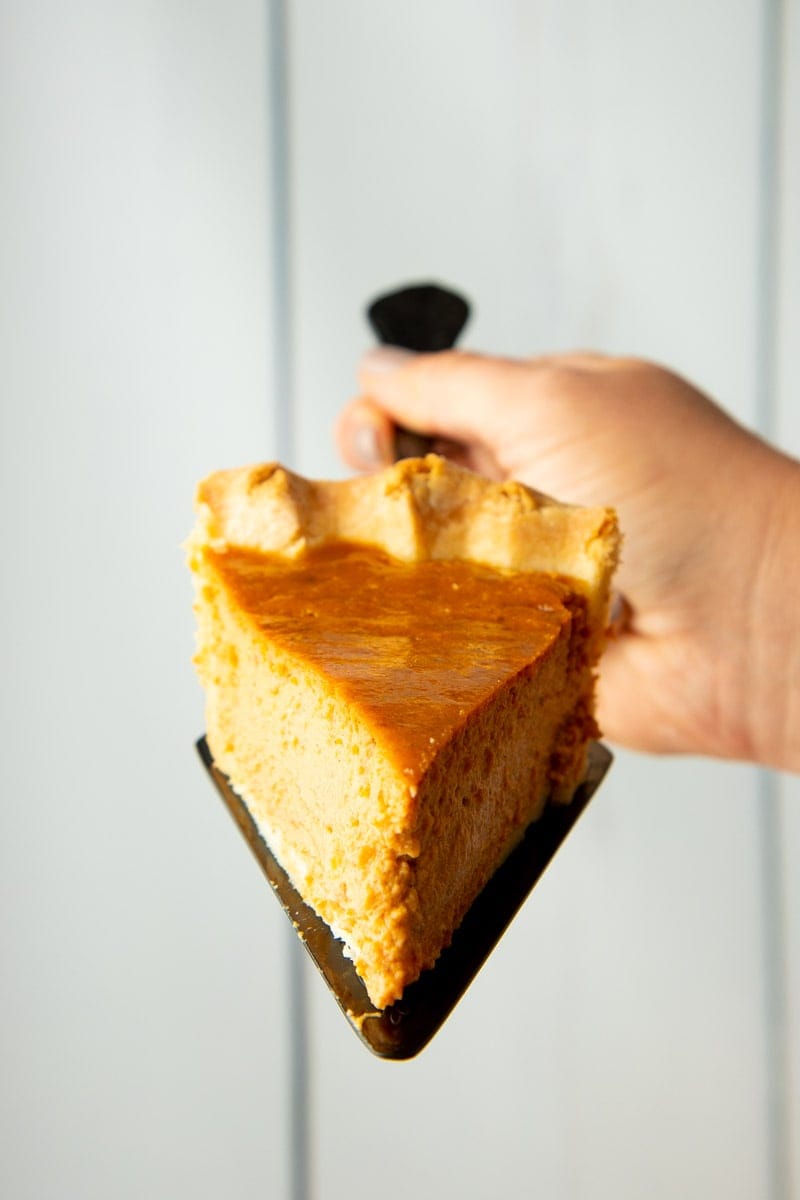 What kind of crust should I use?

The short answer? Any crust you want. That being said, if you’re going to take your pumpkin pie recipe from delicious to heavenly, I’d recommend my perfect pie crust recipe. It’s so simple, you can whip it up in just 10 minutes! Personally, I think 10 minutes is a worthy investment for a flaky, mouth-watering pie crust.

Of course, if your Great Aunt passed down a secret family pie crust recipe that every member of your family learned how to make on their 13th birthday, you should definitely go with that one.

Can I make this with a gluten-free crust?

Absolutely! This pumpkin pie recipe would also work perfectly with the gluten-free pie crust I created. It’s just as flaky and delicious as my flour-containing pie crust recipe. 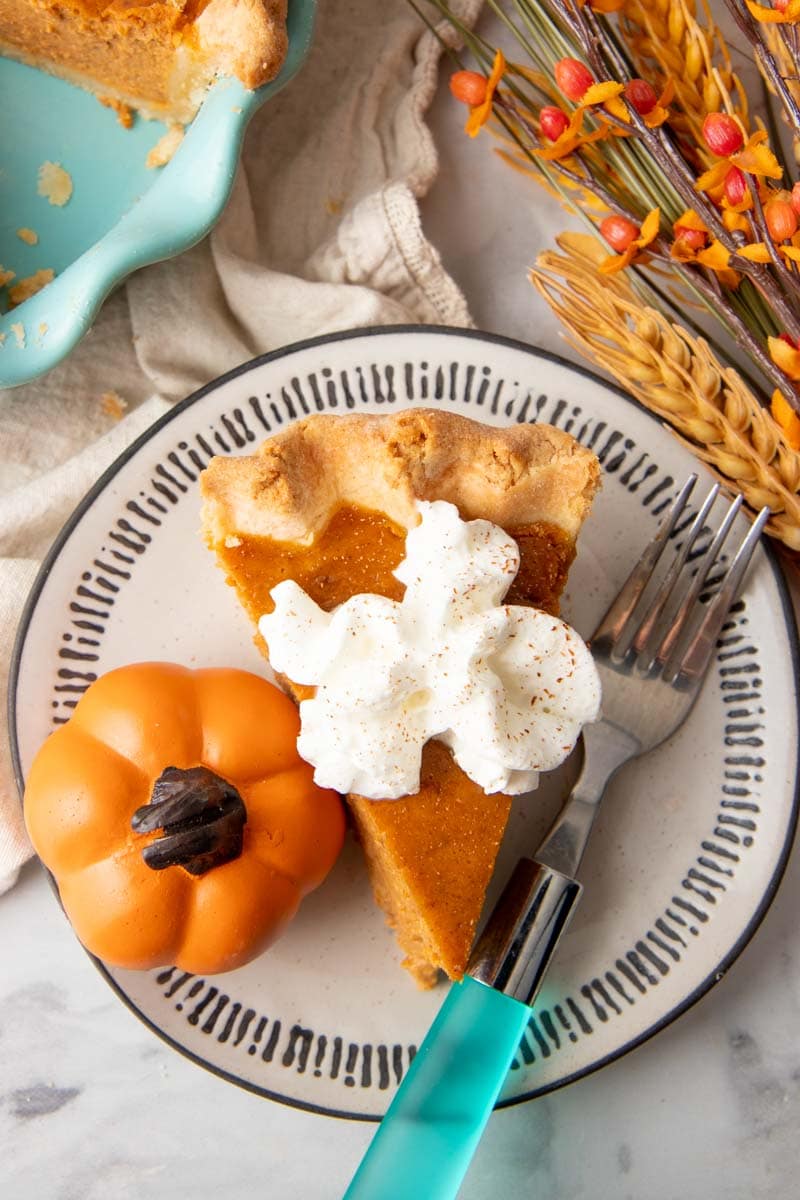 How do you keep pumpkin pie crust from getting soggy?

Because this filling is thick from the get-go, we had no problems with a soggy bottom on our pies. Yay! No need to worry about this.

Do I need to pre-bake my pie crust?

We have tested this recipe with both a pre-baked pie shell and an unbaked crust and found very similar results with both. The pre-baked crust was slightly less soft on the bottom, but honestly, not enough that we recommend spending the time pre-baking your crust.

If you truly loathe even the suggestion of a soggy bottom, you can pre-bake your crust by placing it in a pie dish after your dough is rolled out and line the crust with parchment paper. Fill the parchment paper with some dried beans or pie weights. This will help the pie crust hold its shape, and it mimics the filling you’ll add later.

Place the pie plate in the fridge for half an hour, then preheat the oven to 375°F and bake the crust for 20 minutes. Remove the weights and the parchment paper, prick the crust with a fork a few times, and return it to the oven for another 15 minutes. That’s it! Your pie crust is ready to be used in this pumpkin pie recipe. 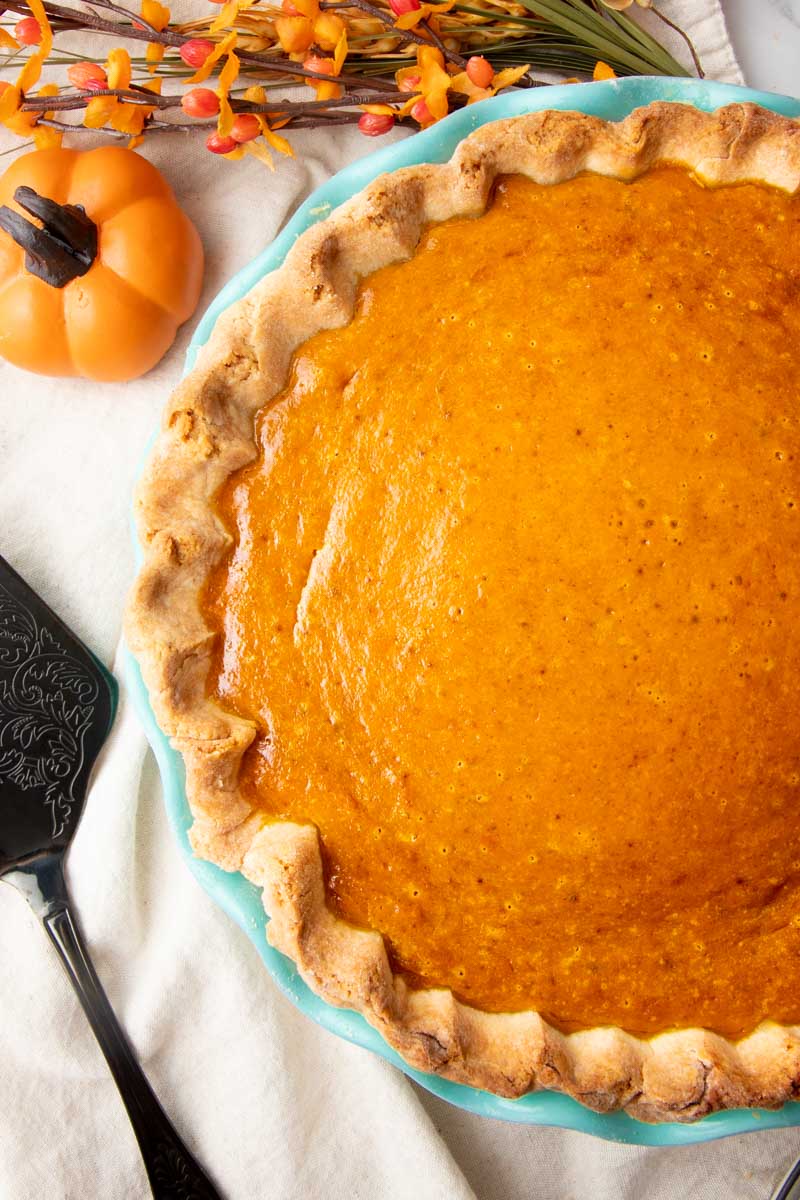 How do I separate the egg from the yolk?

You can get special tools to separate egg whites and egg yolks, but you don’t need them. The simplest way is to crack the egg in your hand. Catch the yolk, allowing the egg white to drip through your fingers into a bowl below. It’s a little messy, but honestly, it’s the simplest way to separate out your egg yolks!

It smells so good! Do I have to wait for my pumpkin pie to cool?

Pumpkin pie smells delicious when it is hot and steaming, but it’s best eaten cold or at room temperature. This allows the pie to solidify and firm up, so you’re not eating warm pumpkin goo. If you prefer your pumpkin pie slightly warm, you can let it cool completely, then re-warm it in a 300°F oven for 15 minutes. 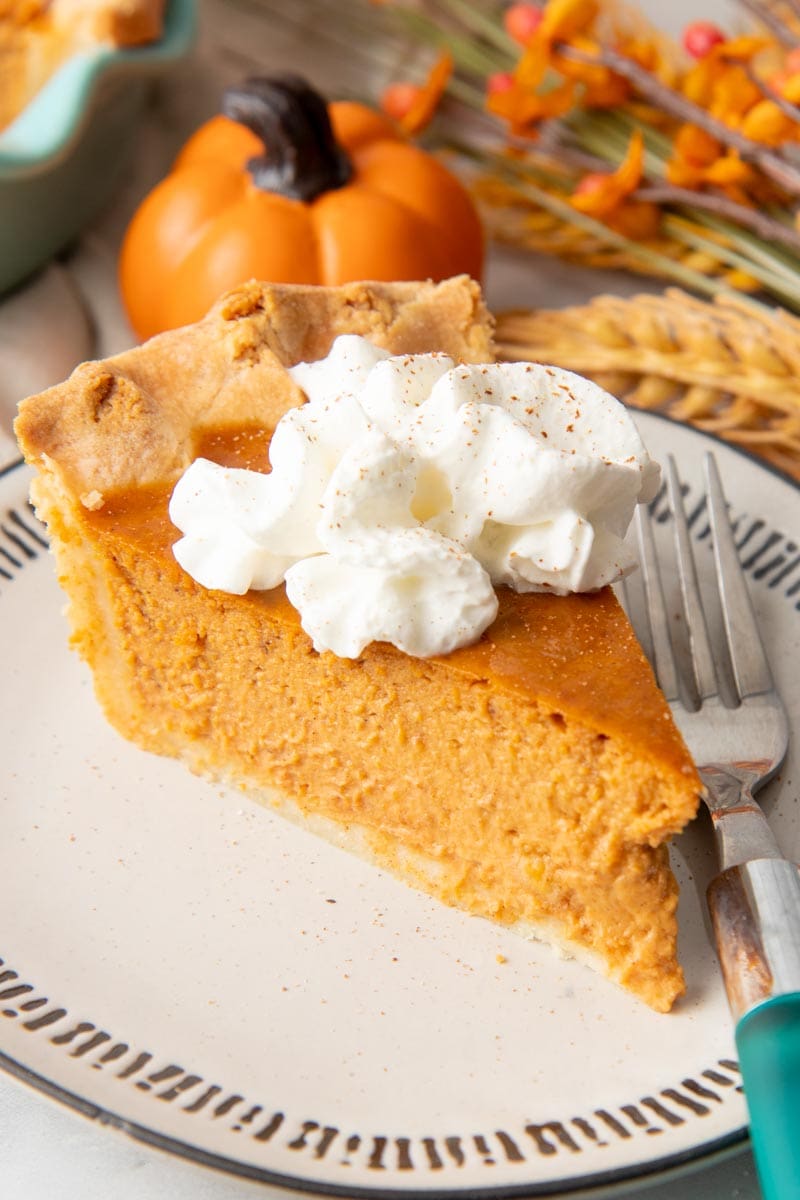 Help! My pie cracked. What did I do wrong?

You didn’t do anything wrong—that cracked pie will be just as tasty as a perfectly smooth one. However, if you want to prevent cracked pie in the future, you should make sure it doesn’t go straight from the oven to the countertop, where it will cool too quickly and potentially crack.

Instead, open your oven slightly, and leave the pie inside. Your oven will slowly cool down over a few hours. After the oven has cooled, remove your pie and let it cool completely on the counter.

Have a cracked pie? Whipped cream to the rescue! Pipe on peaks of whipped cream over the top of the pie before serving—no one will be the wiser.

How long will this pie last in the fridge?

Pumpkin pie is a type of custard, so it’s best refrigerated after it cools completely. It should last up to three to four days in the fridge if it’s covered in plastic wrap or aluminum foil. 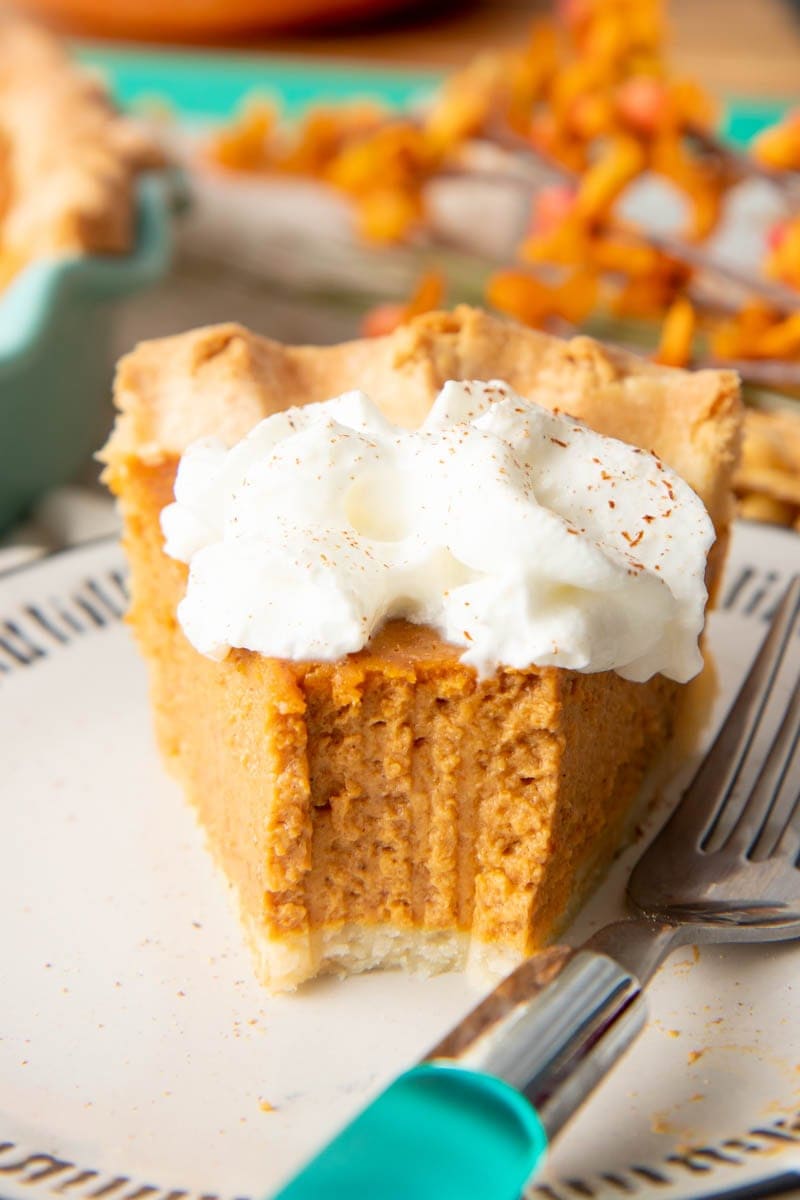 Can this pumpkin pie recipe be made ahead and frozen?

It certainly can! The one tip I’d recommend if you plan on freezing a whole pie is to make it using an aluminum foil pie plate. This way, you can toss the entire pie in the freezer, pie dish and all. After your pie has cooled completely, wrap it in a few layers of plastic wrap, followed by a layer of aluminum foil.

Your pie should thaw in the fridge for at least 12 hours before it’s ready to be topped with whipped cream and enjoyed!