Meal Plans →
Recipe At-A-Glance
...
Holidays10 minutes
Pie crust has a bad reputation for being challenging, but we’re ready to help. Find out our easy-to-follow tips for how to make perfect pie crust every time.
Jump Directly to Recipe 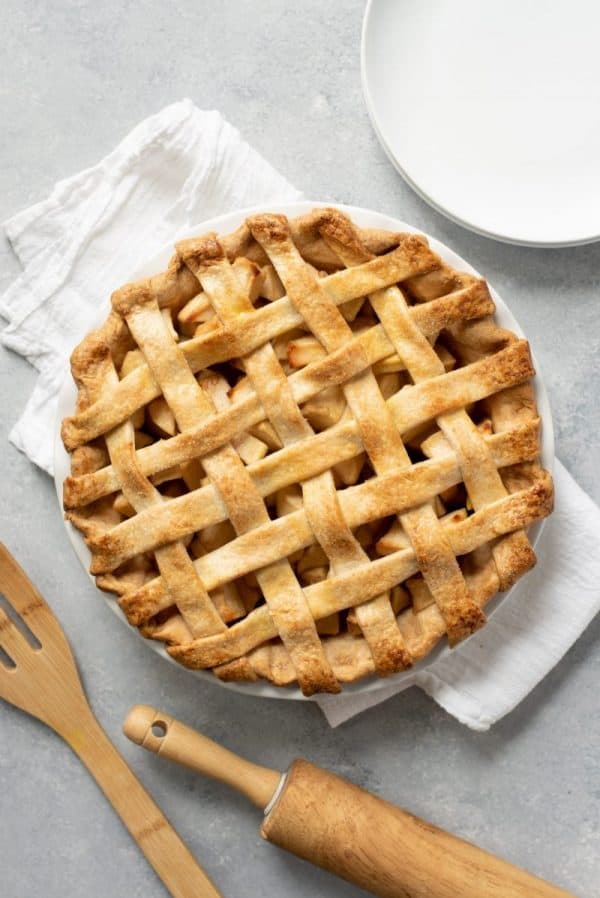 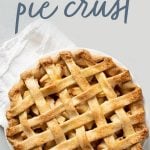 I used to be terrified of making my own pie crust. I’m not sure where the fear came from. Maybe I watched one too many Food Network shows where I was sternly lectured about the importance of using the exact right temperature of butter that was made from milk from a dairy cow raised only on sunshine and unicorn blood, but for some reason, I thought making pie crust was pretty much the hardest thing ever.

Newsflash: it isn’t. It’s not even close to hard. It’s actually pretty freaking easy. And it is definitely one of those things that is worth the extra time to make from scratch. Store-bought crusts do the trick, but a homemade pie crust is life-changing good.

With the holiday baking season coming up soon (or right now, if you live in Canada), let me show you how to take your pies to the next level. I promise, if you make your own crust, someone will say to you, “this is the best pie I’ve ever had.” Guaranteed. 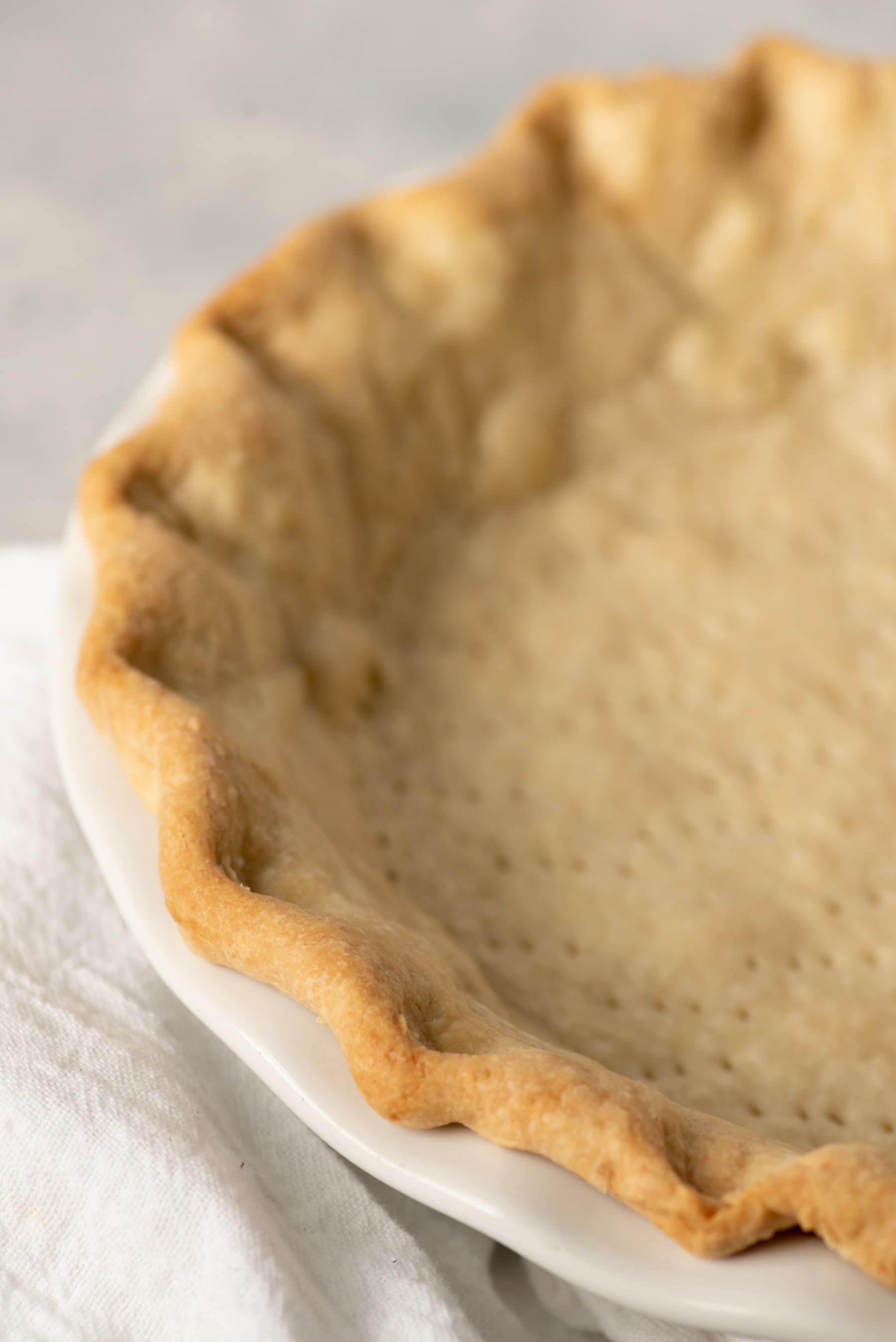 What kind of flour do I need to make pie dough?

My favorite part about home-making crusts is I have complete control over the flours. Almost all of my pie crusts are made with 100% whole wheat pastry flour. If you use a good whole wheat pastry flour, I’d venture a guess that you’d have a hard time telling the difference between it and its enriched white flour brother. I love this organic flour from Great River so much that I order it specially online. That’s love.

Other good options are white whole wheat flour (I really like the King Arthur organic one) or, honestly, just live life and use regular all-purpose flour. Never forget that there are two ways food nourishes us—our body and our soul. And I believe an occasional slice of butter, sugar, and gluten-filled pie is about as soul-nourishing as it comes. 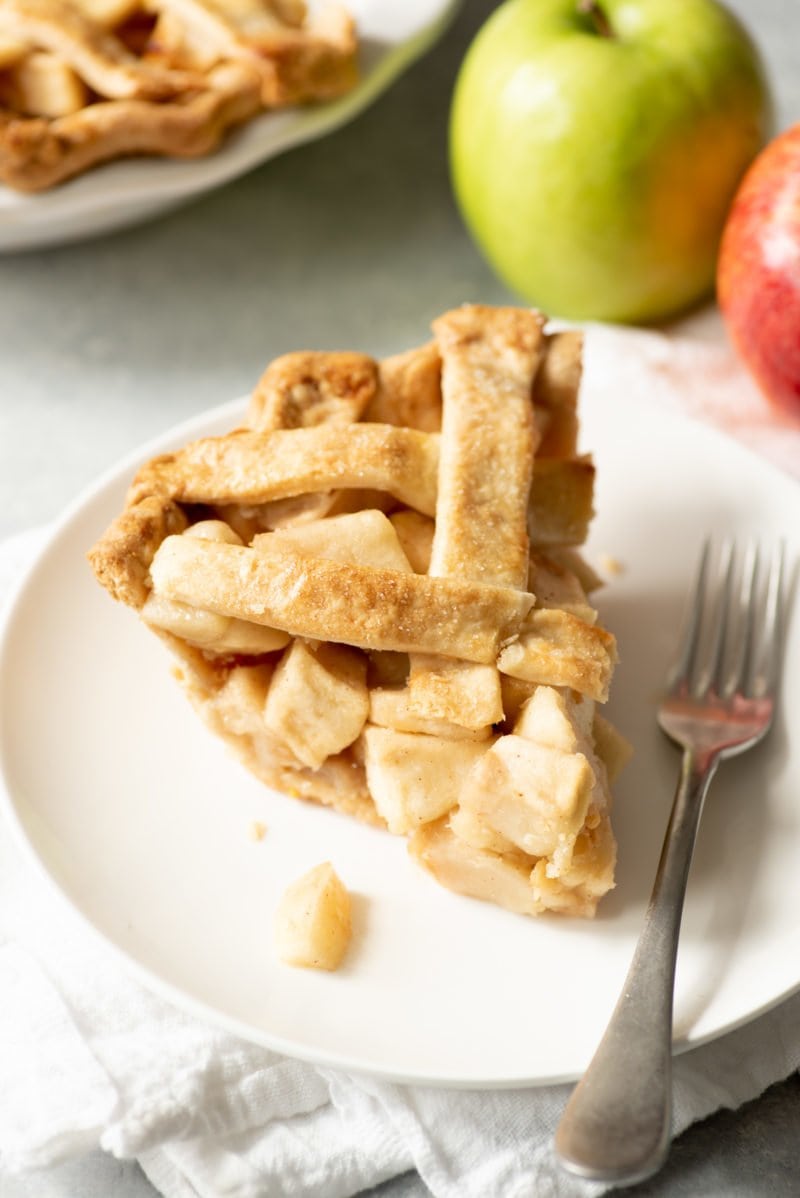 How can I make this crust gluten-free?

Rather than trying to make a one-for-one replacement on the flour, we recommend following a pie crust recipe that is specifically gluten-free. Lucky for you, we’ve developed a great gluten-free pie crust recipe—you don’t need a bunch of specialty flours and gums, and you’ll still end up with a buttery, flaky crust!

What ingredients do I need to make your pie crust recipe?

The ingredients for a perfect pie crust are painfully simple—flour, butter, salt, sugar, and ice water. Done and done. There is a full printable version of the recipe below, but I did want to talk through ingredients a bit before we dig into the tutorial: 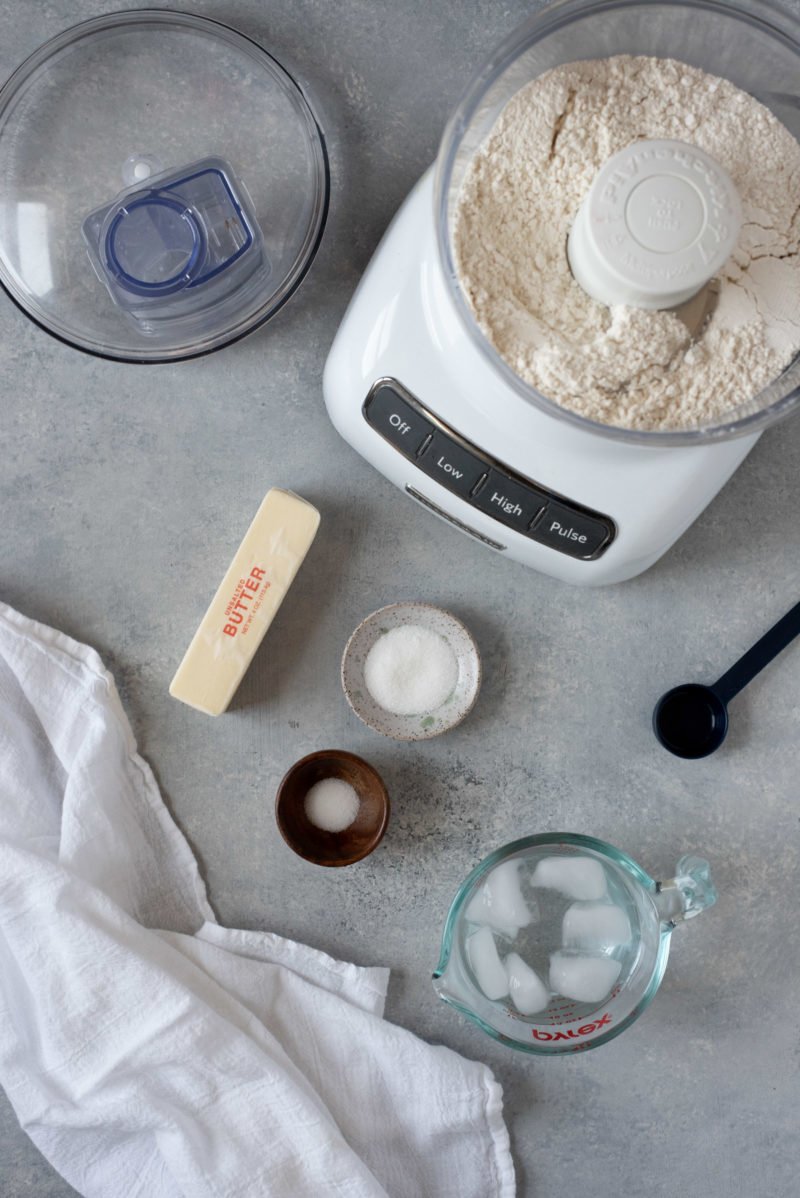 Do I need any special equipment?

The main tool you’ll need here is your handy-dandy food processor. I’ve been using my cheap-o Hamilton Beach food processor to make my pie crusts for a decade, and it’s been just fine. Nothing fancy is needed here. If you don’t have a food processor, you can definitely still do this by hand (and I’ll include instructions below)– just know that it’ll require a bit of elbow grease!

You’ll also want a board for rolling out your crust (a marble pastry board is great, though a silicone pastry mat works just fine, too), a rolling pin, and a pie plate. Alright, let’s get started! 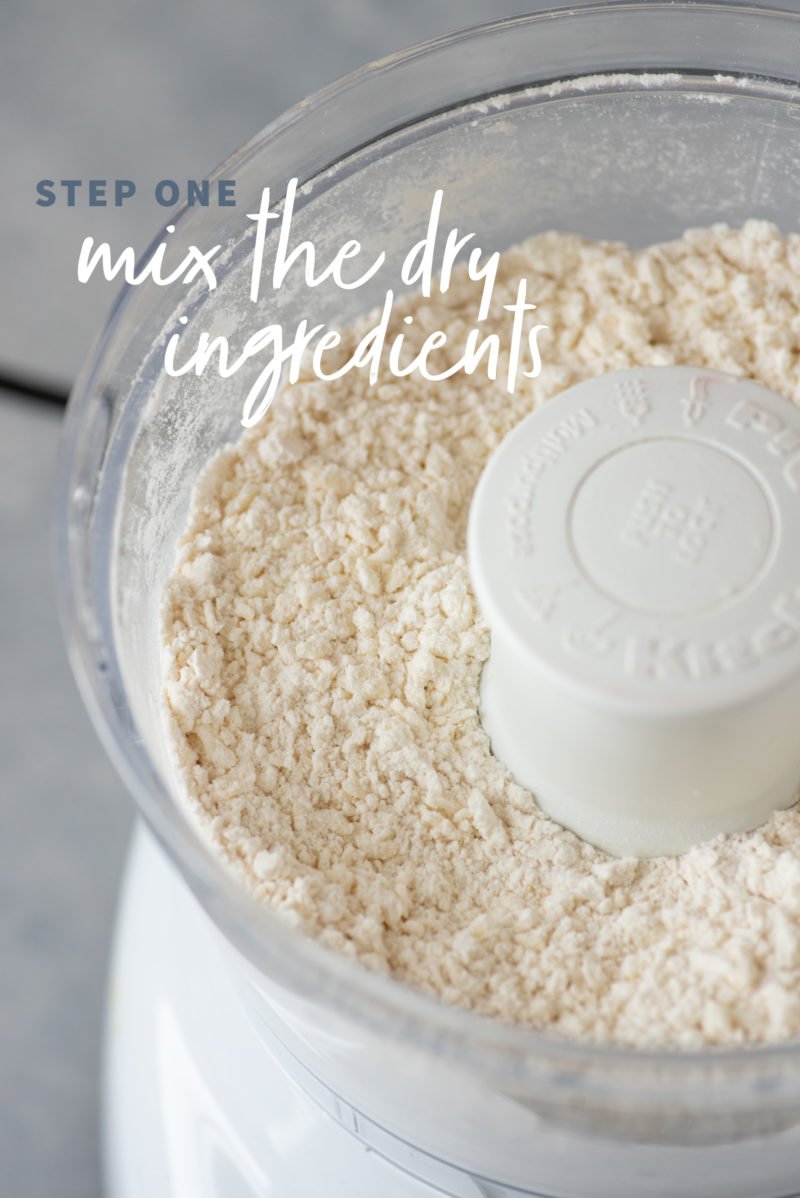 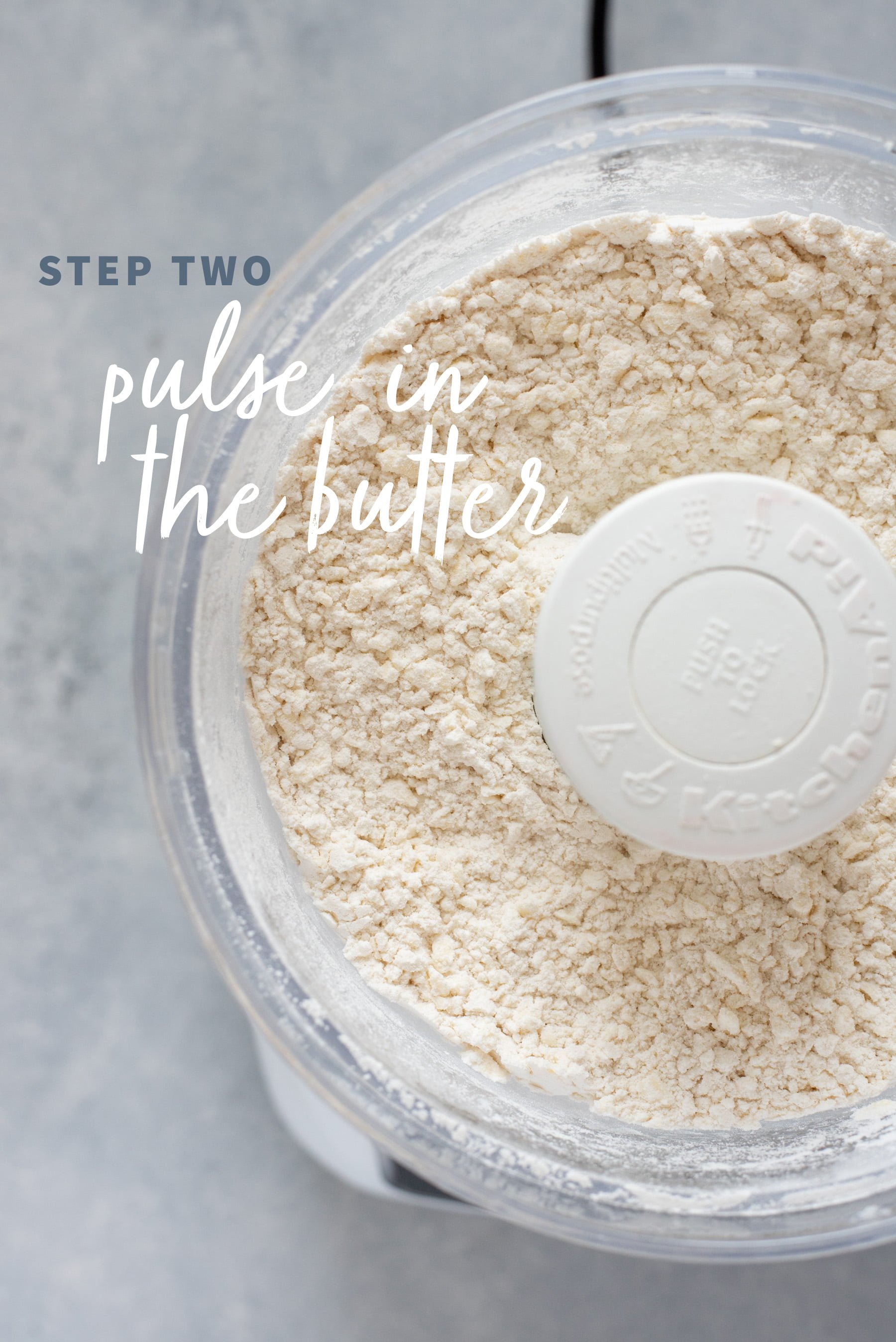 Now it’s time to add your frozen butter. You can take a sharp knife and cut the butter into small (about 1/2”) cubes, but I will say that cutting through rock solid frozen butter isn’t the greatest.

Instead, my favorite trick is to shred the frozen butter using a cheese grater! Just use the largest holes on your cheese grater and go to town (scroll down to the recipe to see a video of how we do this).

Add the cut-up or shredded frozen butter to the food processor and pulse until the mixture resembles the texture of small pebbles. Don’t worry about getting all the butter chopped up evenly. It’s more important for your butter to stay frozen than it is for the butter to be perfectly distributed.

If you are doing this by hand, you’ll need to go at the butter/flour mixture with a pastry blender or two butter knives, cutting in the butter until it’s the size of small pebbles. Work quickly (and in a cool space if you can)– you don’t want that butter to warm up. 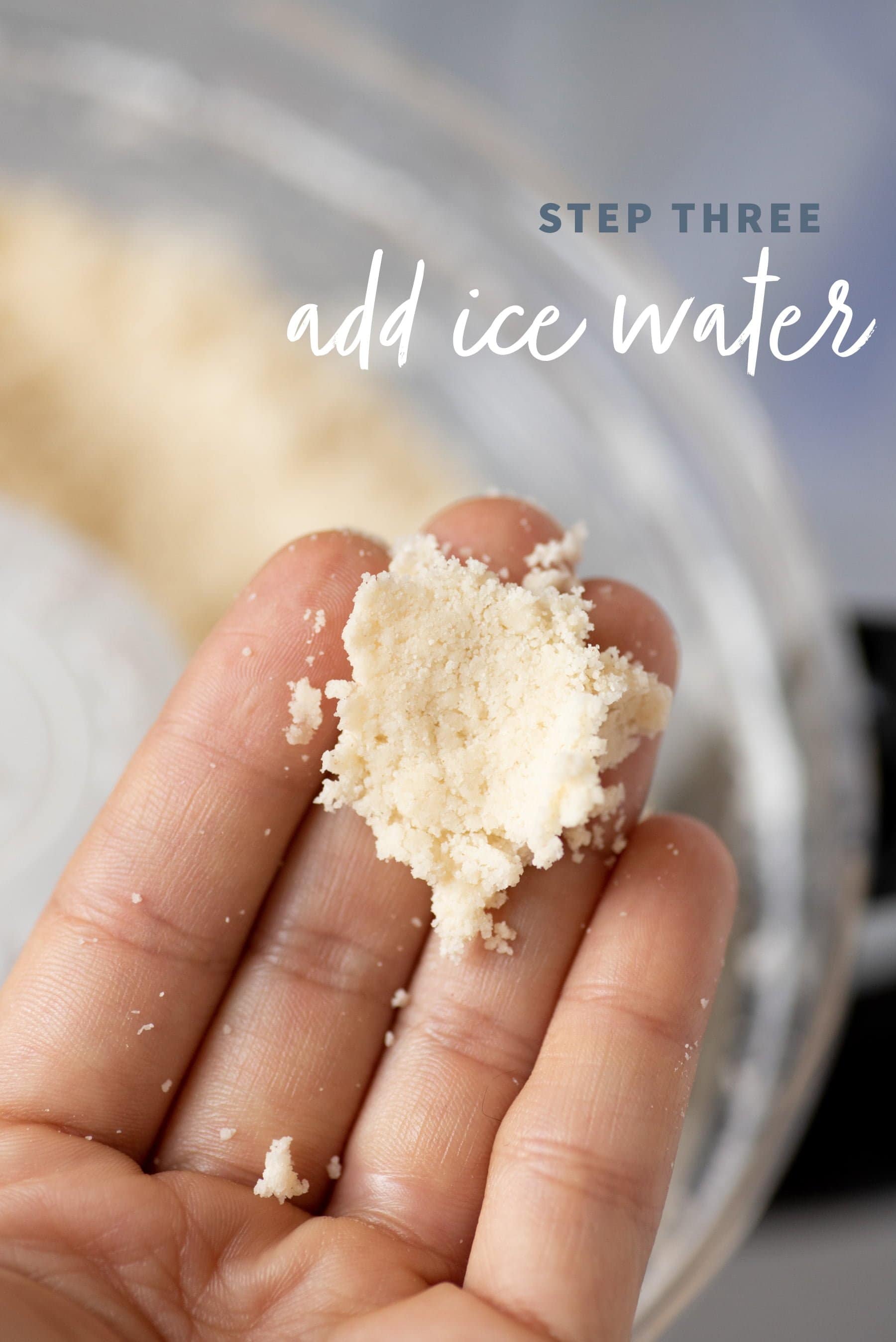 Working a tablespoon at a time, add in the ice water and pulse the food processor until combined. After each addition, grab a handful of the mixture and squeeze it together. When it stays together without crumbling (it usually takes about four tablespoons for me), you are done. If you are doing this by hand, follow the same method, except whisk vigorously between each tablespoon of water. 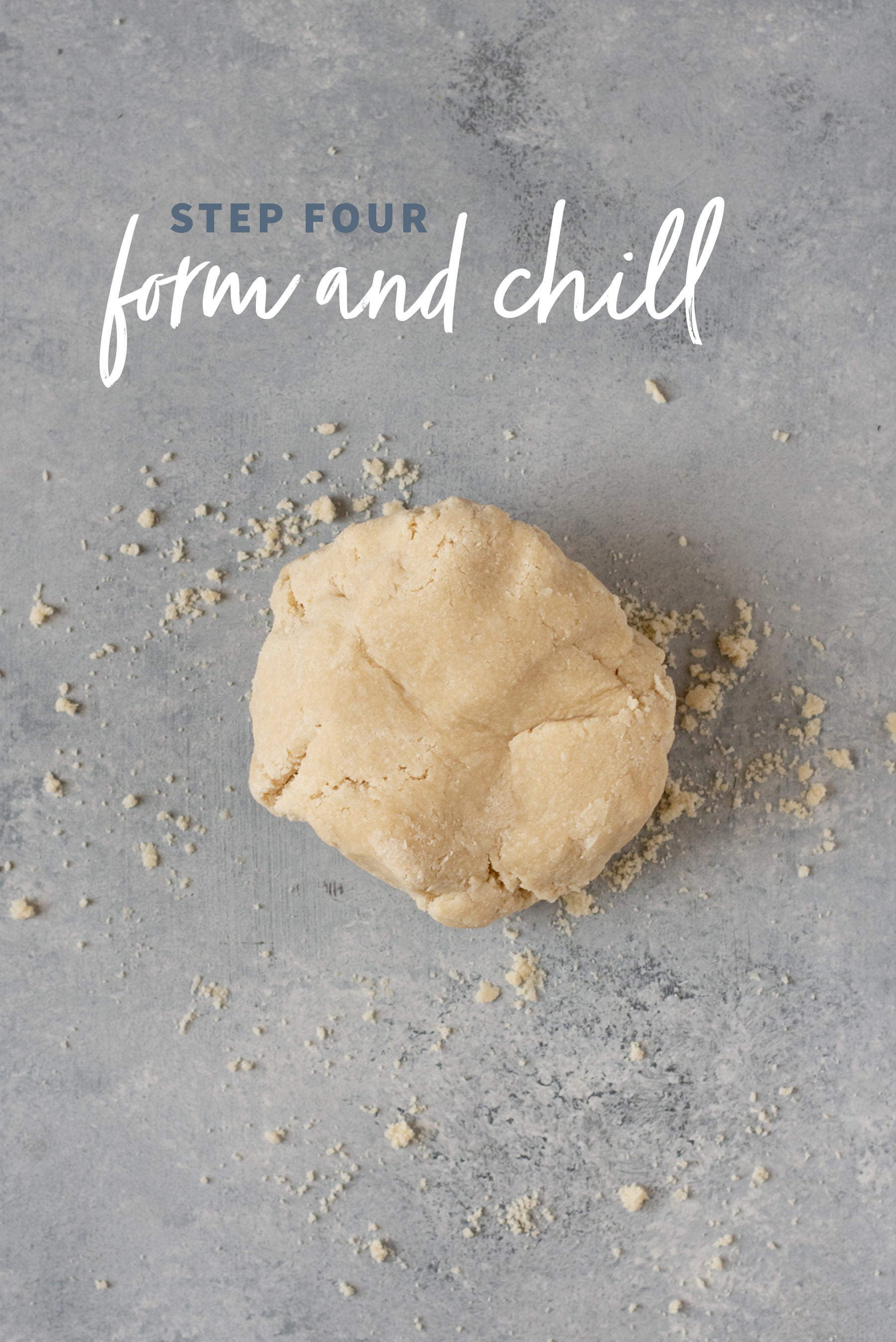 Yay! Your pie crust dough is done. So easy, right? Now dump the crumbly meal onto a clean work surface and, using your hands, form into a solid lump, then into a disc. Work as quickly as possible because the heat in your hands will melt the butter (which, as we’ve established, is a no-no). The disc doesn’t have to be perfect.

Wrap up the disc in plastic wrap and stash in the fridge. It’ll need to rest in there for about 20 minutes before you roll it out. If you’re in a rush, you can stick it in the freezer for 5-10 minutes. 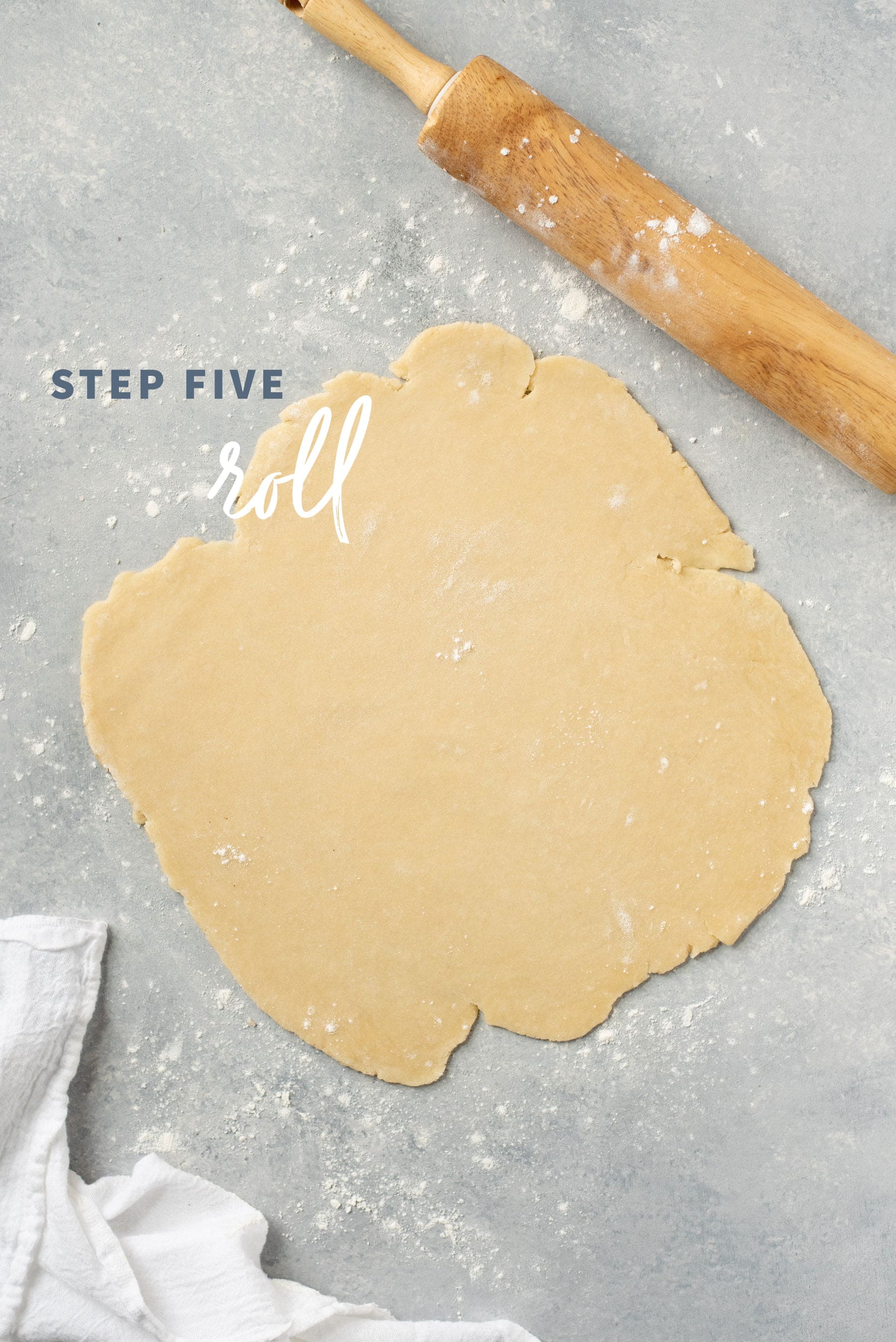 After the crust has chilled out in the fridge, let it warm up a bit at room temperature for just a few minutes. Roll it out on a lightly floured work surface until it is about 1/8″ thick and large enough around to cover your pie dish. Roll the crust around your rolling pin for easy transporting. 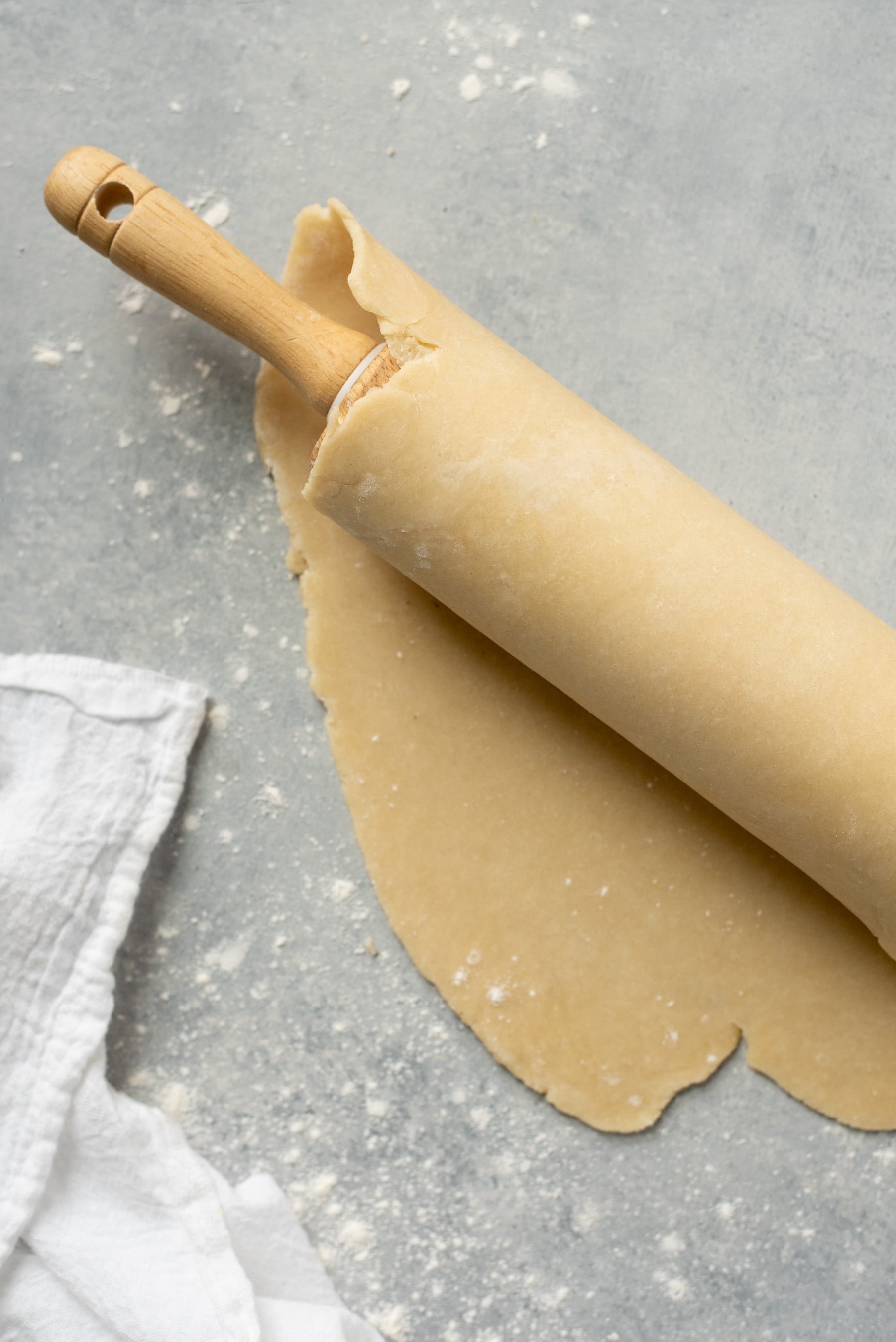 Unroll on top of your ungreased pie plate (don’t worry, there is enough butter in the pie crust to not stick). Gently push it into the plate to contour along the sides. 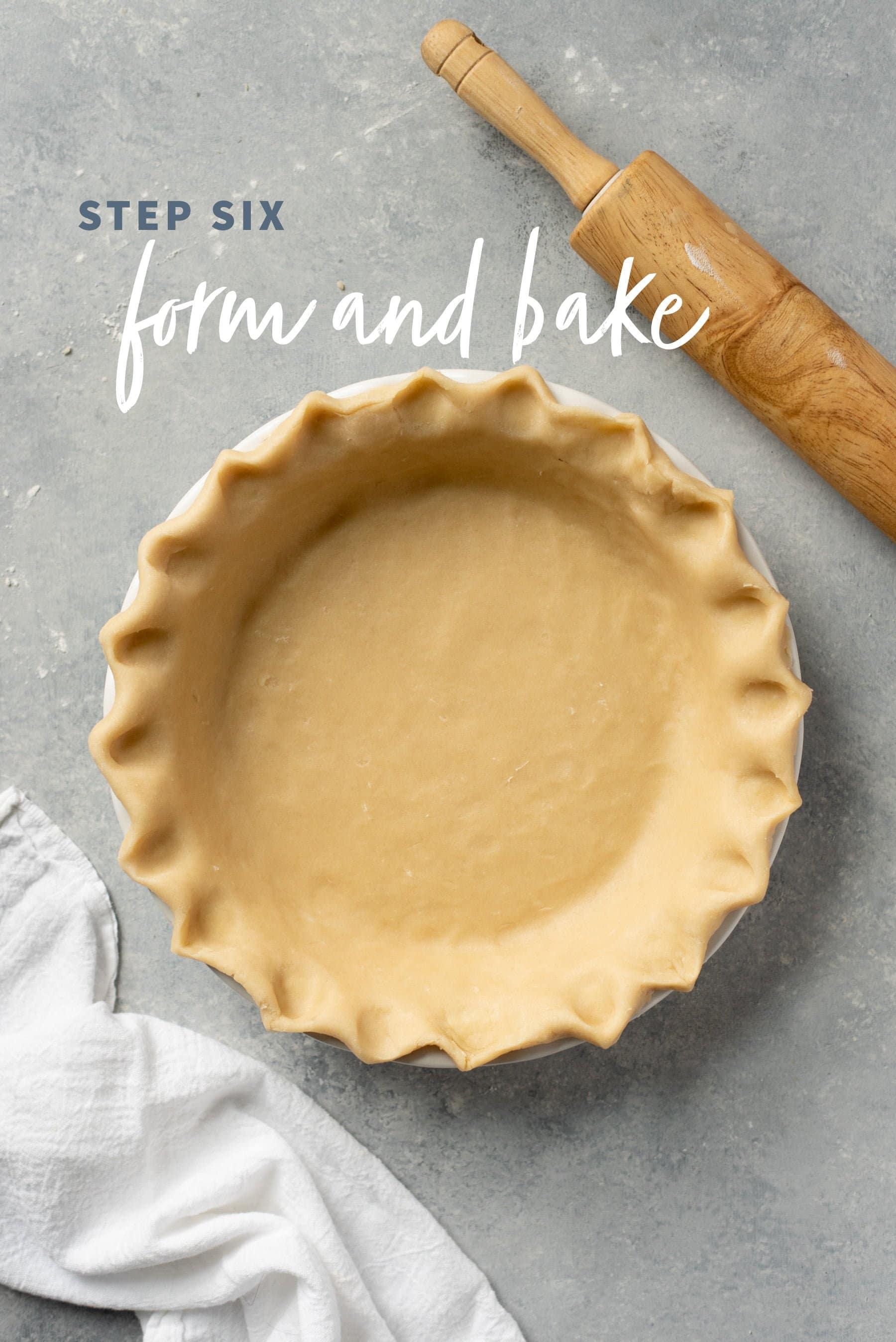 Leaving about 1/2″ all the way around, trim the extra crust, roll the 1/2″ under, and then flute or decorate the edge however you prefer. Tada!

How do I bake this pie crust? 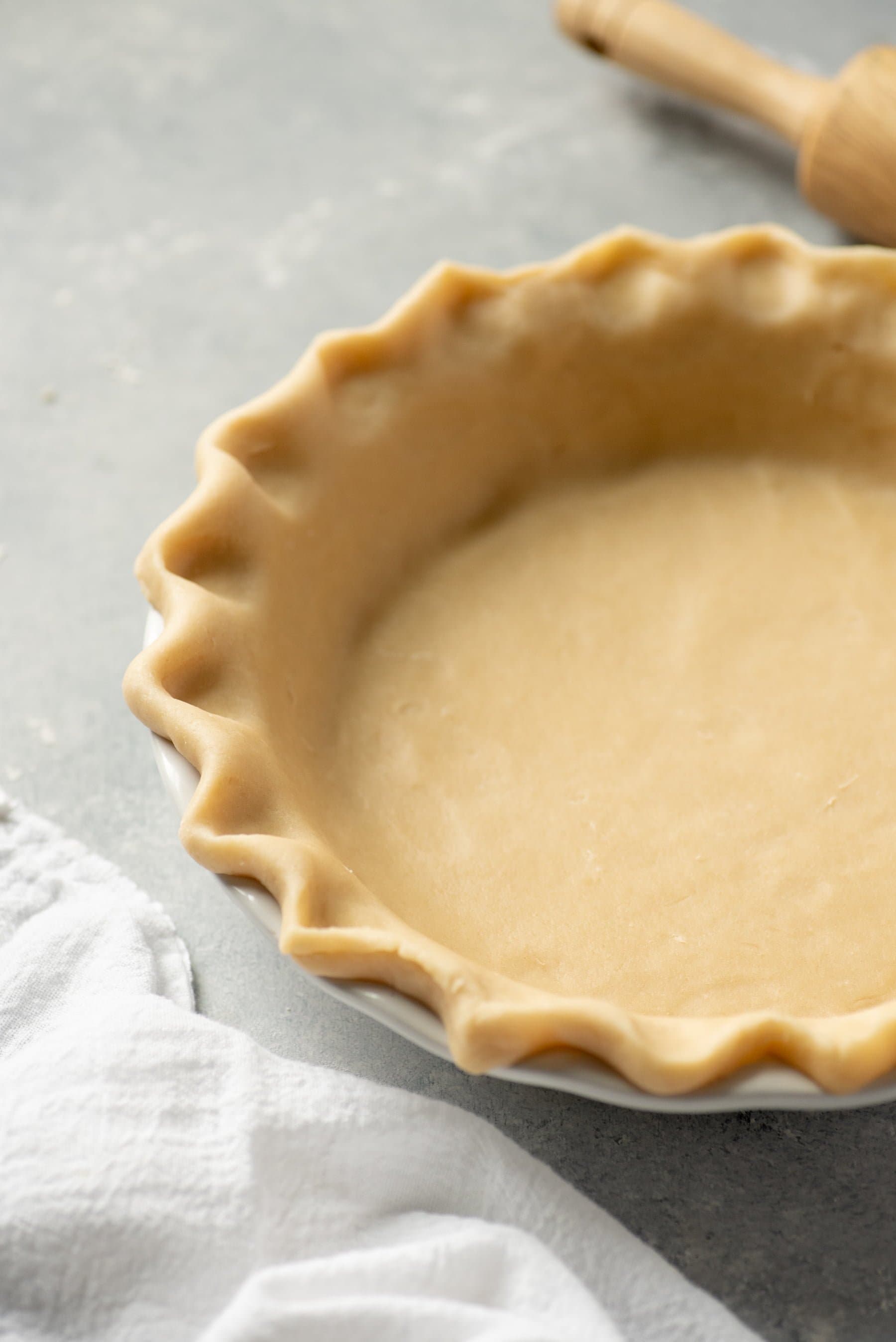 If your pie recipe calls for an unbaked crust, just fill and bake according to the directions in your recipe.

If you need a blind-baked crust (a crust that is already fully cooked—usually for no-bake pies), then here’s how you do that:

Line your crust with parchment paper, then fill either with pie weights or country-girl pie weights (AKA: dried beans). Place the whole contraption in the fridge for 30 minutes. Then bake in a 375°F oven for 20 minutes. Remove the pie from the oven, then lift the parchment and weights out. Using a fork, prick all over the bottom of the crust, and then pop back in the oven for an additional 15 minutes or so. 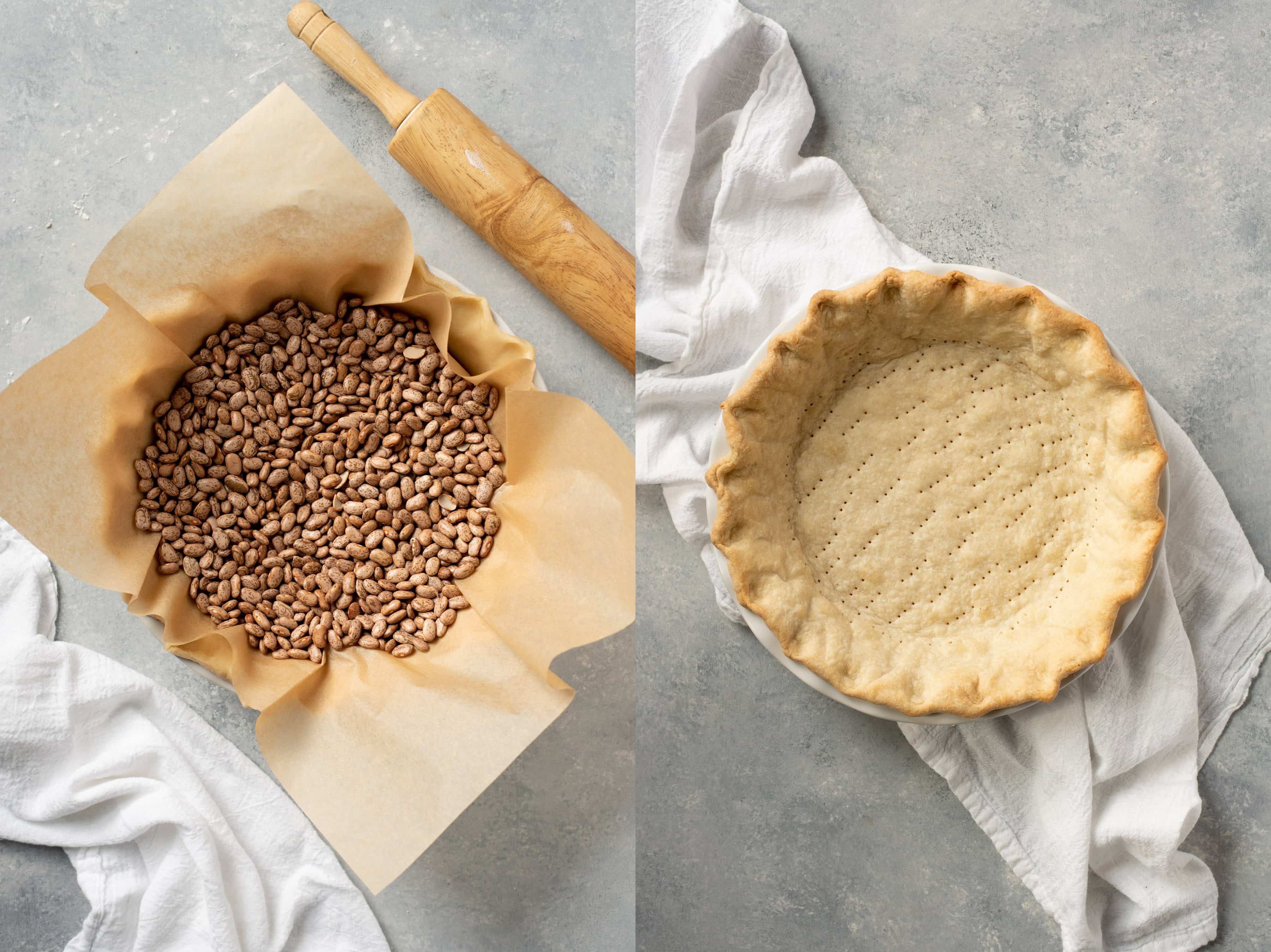 And that’s it! I promise that making your own pie crusts is the way to take your baked goods to the next level. Happy baking!

To Blind Bake (Pre-Bake) the Crust: