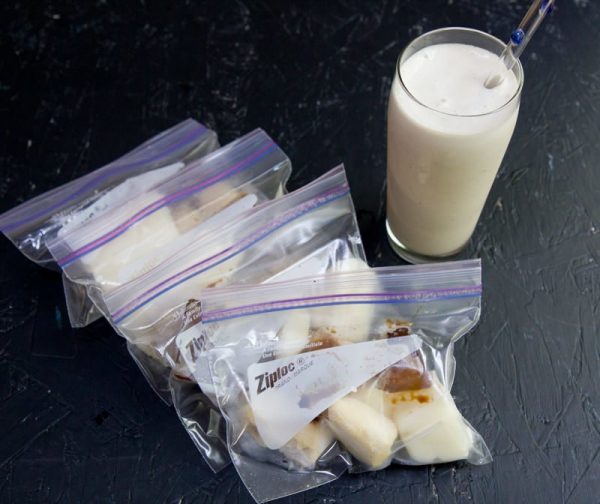 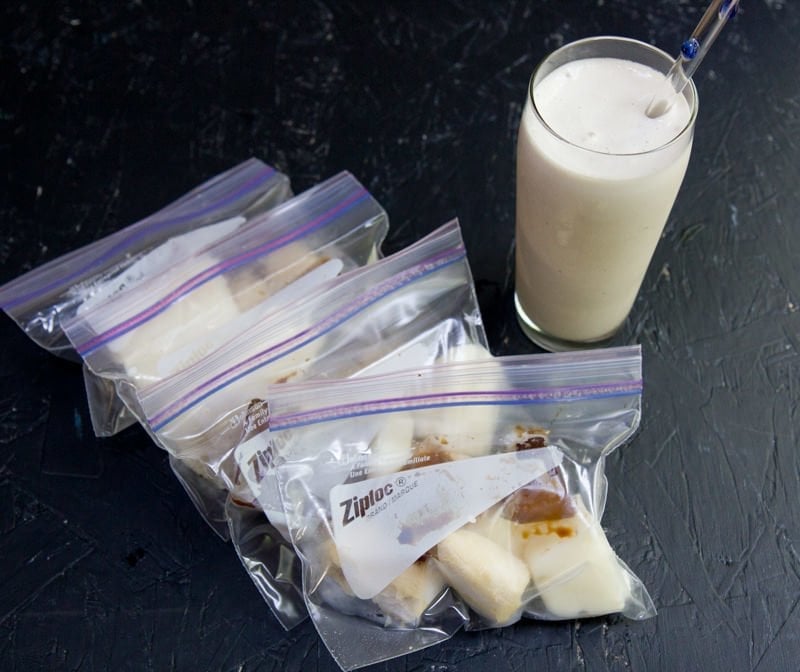 Smoothies are a new parent’s best friend. Seriously. Being able to pack tons of nutrients and goodies into something that can be “eaten” with one hand is pretty much life-saving when you’re busy taking care of a little one. I think all parents should register for a high-quality blender on their baby registry.

Thankfully, I had a sneaking suspicion that I might enjoy some one-handed eats and managed to whip up a big batch of smoothie packs before I went into labor. If you’ve never made a smoothie pack before, basically it’s all the ingredients for a smoothie portioned out for an individual serving, all ready for a trip in the blender. I’m the first to admit that there is nothing complicated about making a smoothie the regular way, but being able to shave a few minutes off with smoothie packs has been a total lifesaver during these itty bitty teeny tiny newborn baby days. All I do is open up one of these packs, dump it into the individual serving cup of my blender with some milk, and—bam!—smoothie. 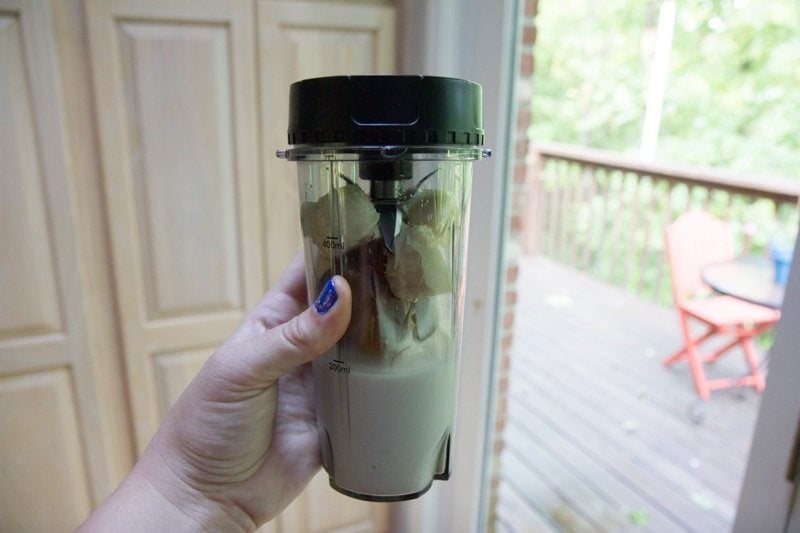 It probably comes as no surprise to you, but my favorite of the smoothie packs I made is this banana-yogurt smoothie that’s spiked with some fully-leaded coffee. I’ve always enjoyed coffee, but I’ve never been one of those folks that needed a daily jolt of java. But now, I’m quite liking the little bit of pick-me-up that I get from coffee, and being that it’s the middle of summer and hot as heck here in the Midwest, I really enjoy getting my burst of energy in cool, creamy, frosty smoothie form. 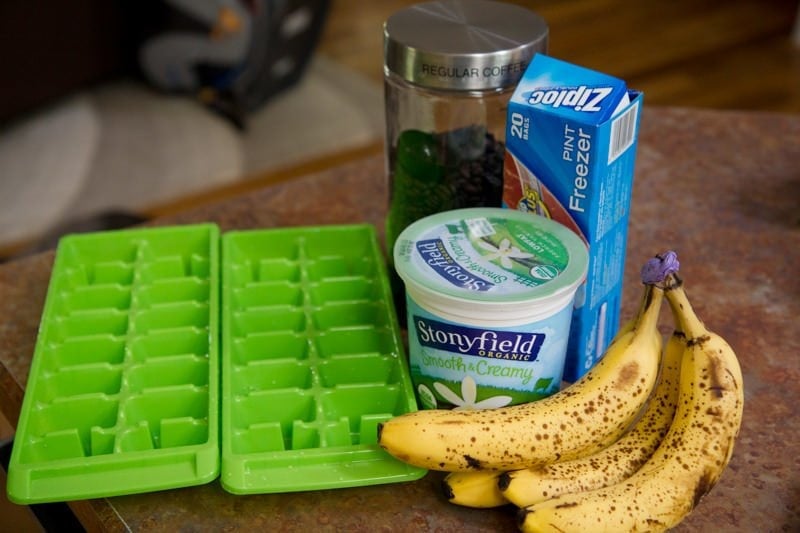 To make them, I first portioned out the yogurt into an ice cube tray. I went with vanilla yogurt because I like the added flavor and the little bit of sweetness, but you could obviously use plain yogurt or whatever else sounds good to you. 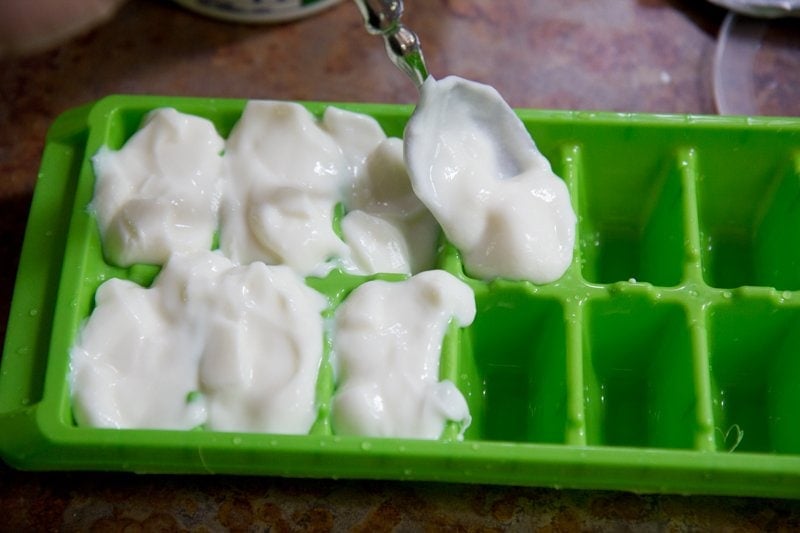 And then, in another ice cube tray, I froze some highly concentrated coffee. I made this coffee about twice as strong as it would be if I was just drinking the coffee, because I only put two coffee cubes per smoothie. I really wanted that coffee flavor (and well, the caffeine) to come through in the final smoothie. You could also make espresso and freeze it if you have an espresso machine. 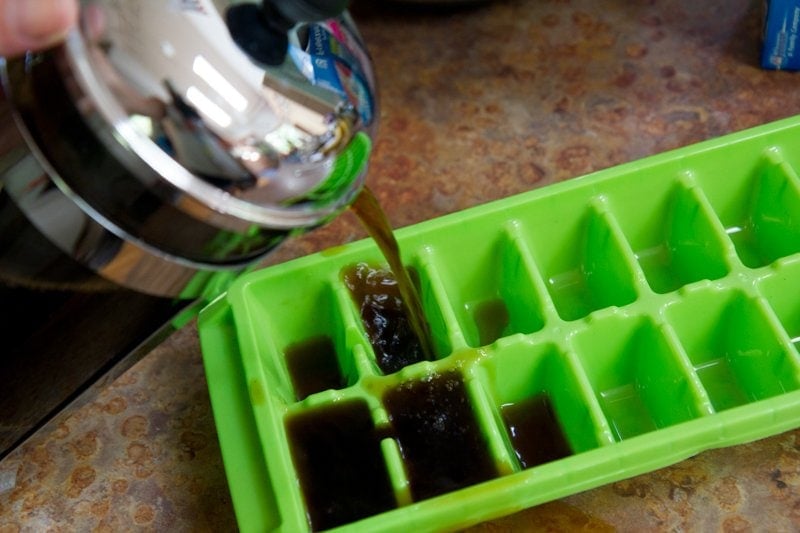 And then I also froze banana pieces into large chunks. For each smoothie pack, I put in two yogurt cubes, two coffee cubes, and about half a frozen banana into pint-sized freezer bags. 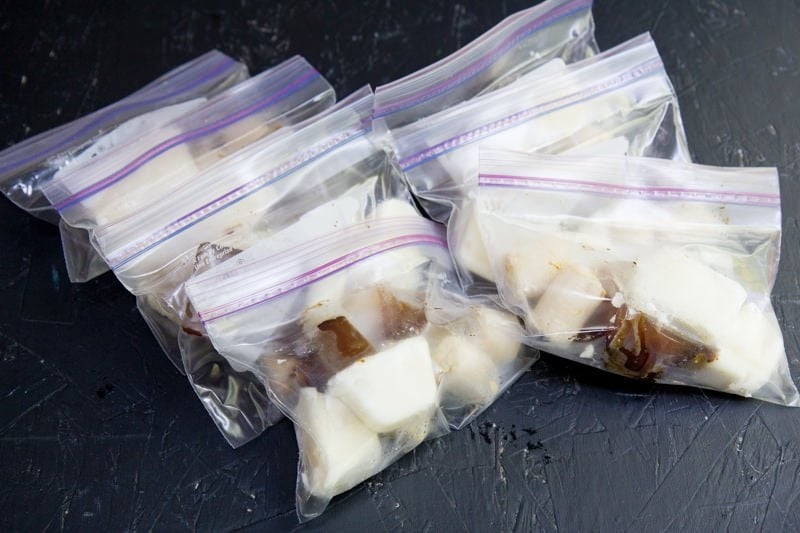 And then, when it’s time to make the smoothie, I just dump the pack into the blender with about a cup of milk and blend it all up until smooth. This gets me about a 12 ounce smoothie, which is a perfect hold-me-over option until I can procure a real meal. I then rinse out the freezer bag and hang it up to dry for the next time I want to make smoothie packs.

This method of smoothie pack making works for all kinds of flavors. I have other packs in the freezer with yogurt cubes, frozen strawberries, frozen bananas and these booster packs, which are nice for when I need to get in some real nutrition. I’m also thinking I might make some with chocolate milk (yum!), banana, and peanut butter.

What’s your favorite kind of smoothie?