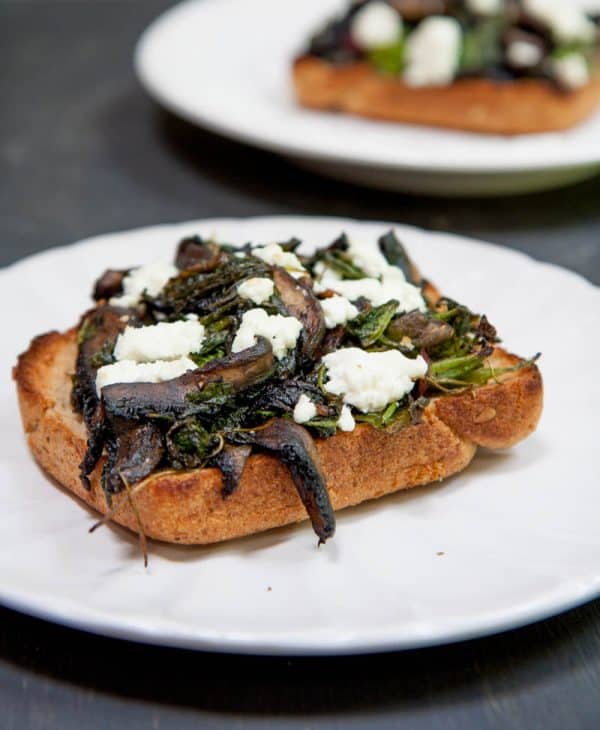 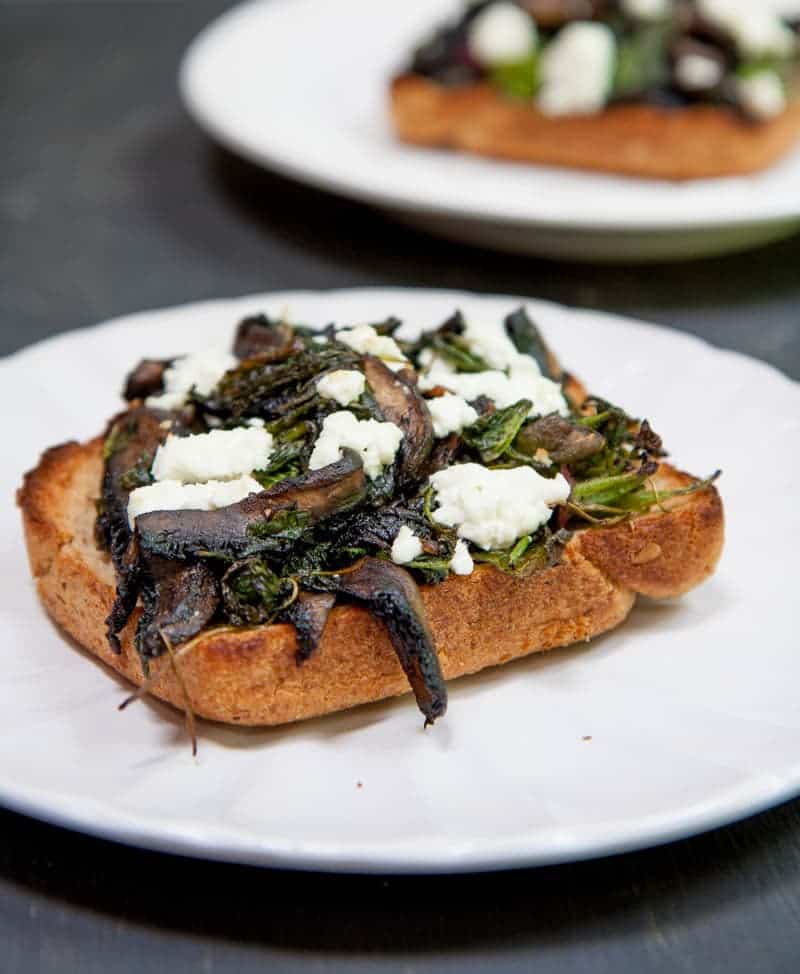 Radishes and I have an interesting history. I’ve never loved radishes. But I have always loved picking radishes. They were absolutely my favorite veggie to harvest when I was a kid. There is something insanely satisfying about pulling on those prickly, green tops and a scarlet red bulb (or long root in the case of the Cincinnati Market variety we’re growing this year) pops up and is just so beautiful and vibrant and exhilarating! 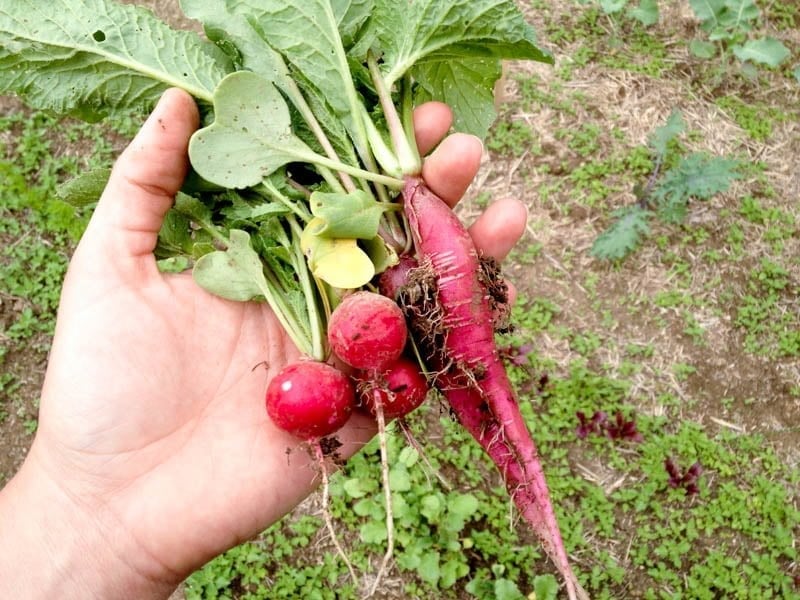 As a kid, I would pick radish after radish, but never eat them. They were just too spicy and too pungent for me. Even though that bias extended into adulthood, I’ve since learned to tolerate radishes. Especially when thinly sliced so I don’t have to bite into a huge chunk of the crisp spiciness.

Now that we’re growing our own radishes, I’ve found that I’m loving rediscovering this veggie that I’d previously put only in the “salad” box. We’re growing two varieties—Early Scarlet Globe and Cincinnati Market—and they are some of the sweetest and most mild radishes I’ve ever eaten. They have such a nice, delicate flavor compared to the radishes I’ve had from the store (or the ones from my childhood). I think I might like radishes? 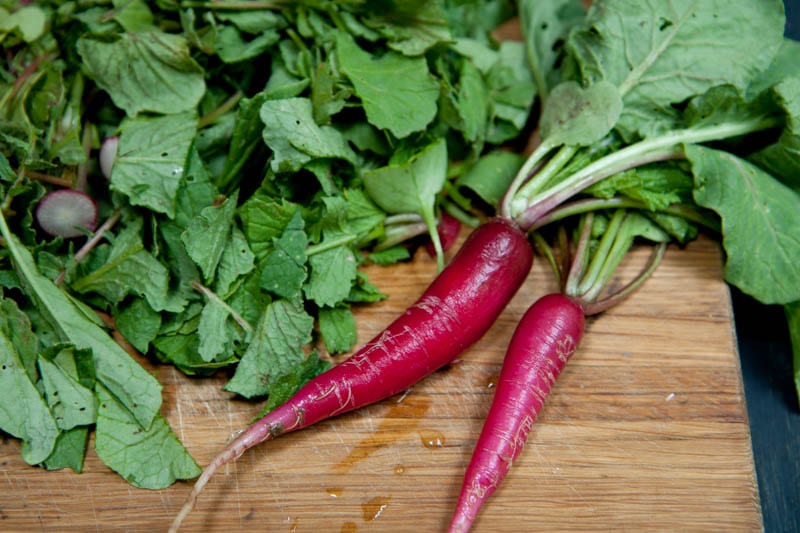 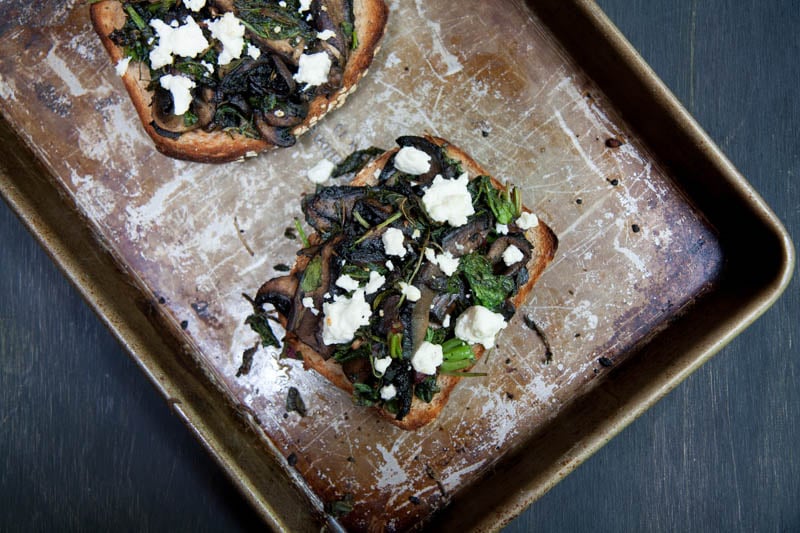 One of my favorite discoveries on my journey to radish love—you can eat the greens! For years, I’ve been tossing radishes greens in the compost, but it turns out, they are a flavorful, nutritious, tender green that you can use just like kale, spinach or chard. I expected the greens to have that spicy bite that radishes have, but the greens are mild and earthy. I think, if anything, they taste like a more mild spinach. They work beautifully as a base for other flavors (like, uh, butter and garlic, see below), and if you’re so inclined, they pair nicely with the spicier, more flavorful radish bulb.

I’m always a fan of figuring out a way to get more food out of the same plant, so I’m pretty giddy that I can eat the entire radish plant. Radishes are so insanely easy to grow and, from seed to harvest, are one of the quickest veggies in the garden. We planted our radish seeds about six weeks ago and we have more full-grown radishes right now that we know what to do with. 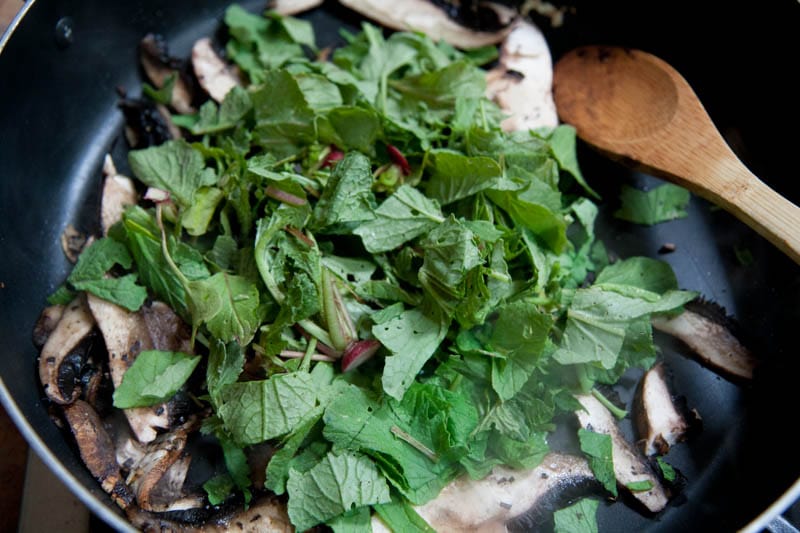 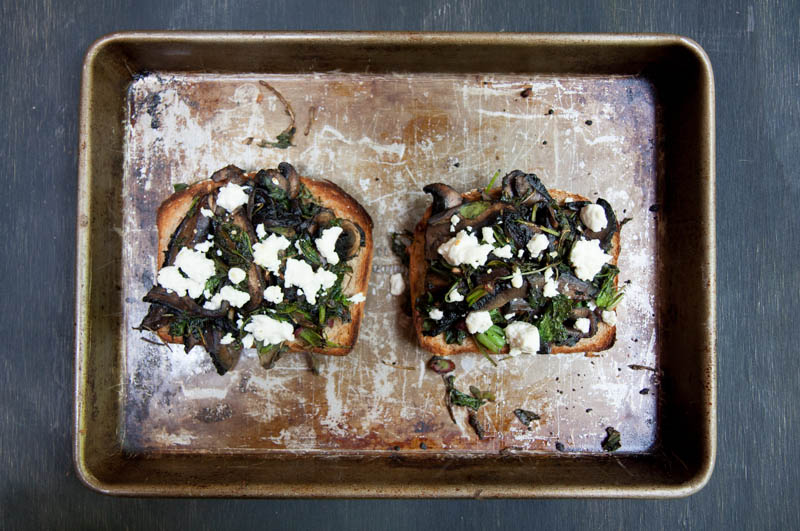 We’ve been eating our radish bulbs raw in a lot of salad (and in another radish-y recipe I have coming your way soon), but I’ve been stashing the greens in a baggie in the fridge until I had enough to make these toasts. We love eating veggie toasts like this—they are the perfect light lunch and super tasty and healthy.

If you don’t have access to a never-ending source of radish greens like I do, you can easily sub in your favorite dark, leafy green. I think this would be incredible with chard (and the rainbow stems would look especially beautiful). Ever had Brussels sprout greens?  They are rockin’ and would be delicious with these meaty portabellas and creamy goat cheese. If you feeling particularly decadent, you could put a runny egg on top of these and eat them with a knife and fork. Yum! 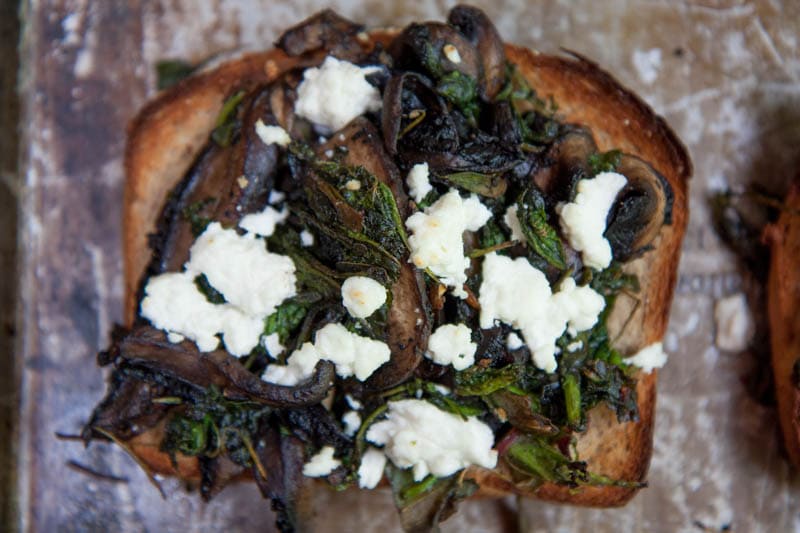 I hope I’ve convinced you to not toss your radish tops in the compost the next time you pick up a batch from the store or farmer’s market. Enjoy!

P.S. Sending a million hugs to all of this week’s tornado victims. I’ve been through a tornado or two in my life, and I wouldn’t wish it on my worst enemy. As sad as this week’s storms have been, they serve as a great reminder of how important it is to make your family an emergency kit. Trust me, it can be both a figurative and literal lifesaver.

Have you ever eaten radish greens before? What’s your favorite way to prepare them?