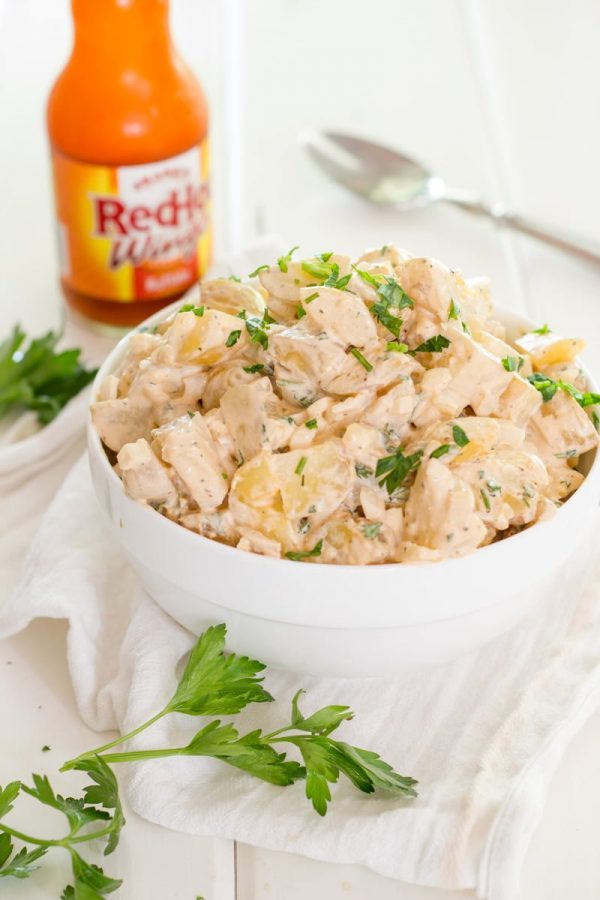 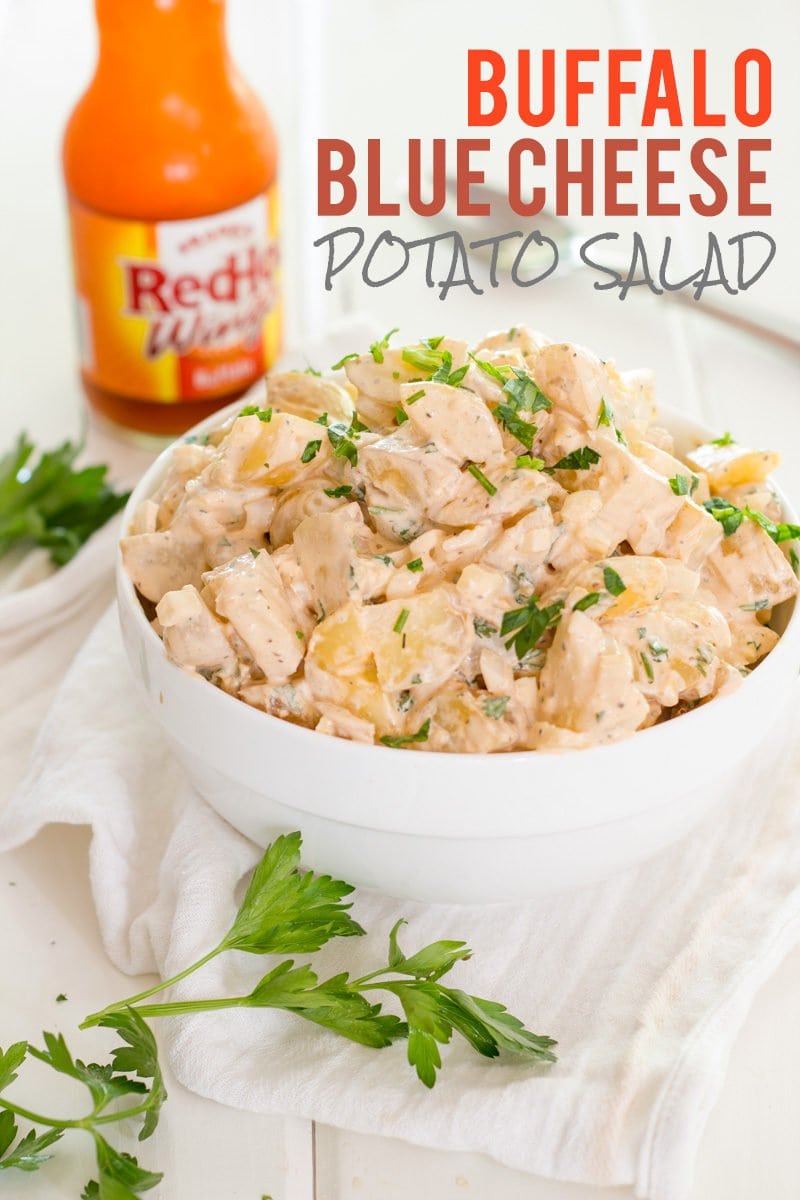 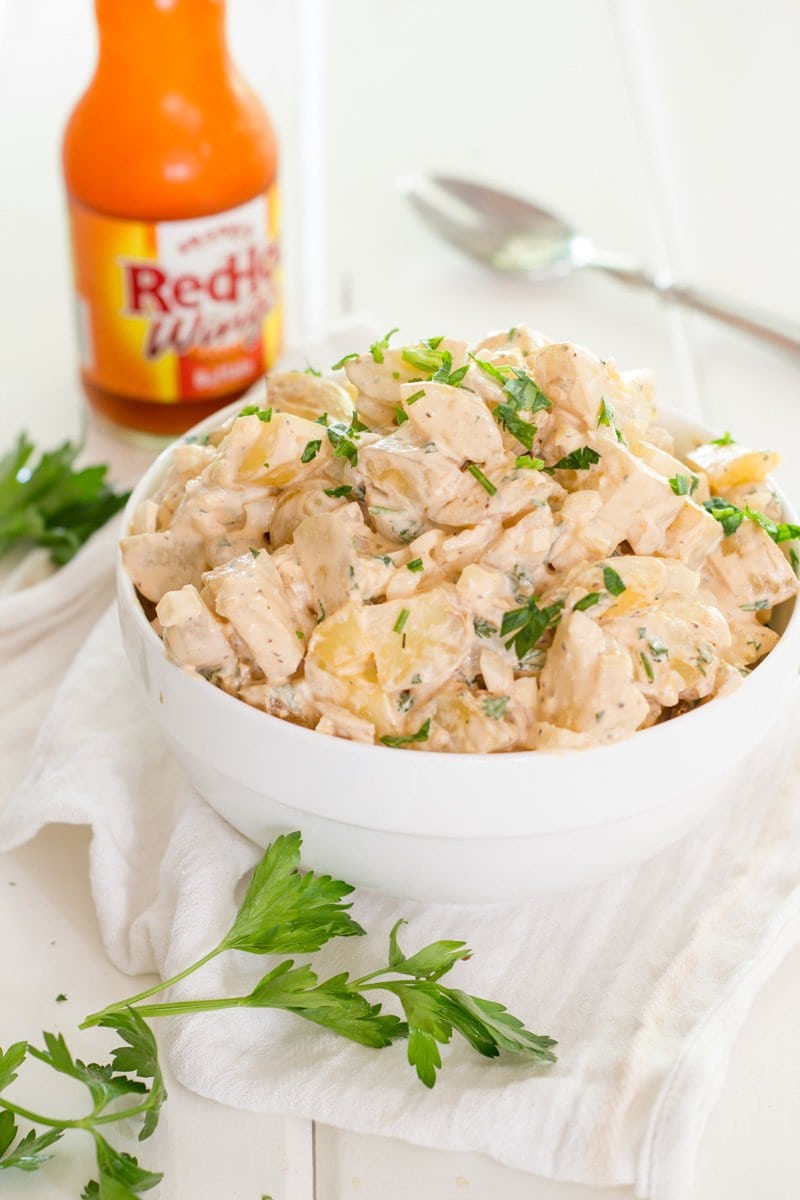 A little bit spicy, a lot a bit flavorful, this Buffalo Blue Cheese Potato Salad will knock the socks of the guests at your next pitch in!

I’ve told you guys before how big of a deal the 4th of July is in my neck of the woods, right? It’s huge. Like, if it’s a slow news day, you’ll probably see my hometown on the national news kind of huge. Which is saying a lot for a town in a flyover state (said lovingly, of course) with a population of 1300.

Why is our lil ole celebration newsworthy? Well, it’s because we have the oldest consecutive 4th of July party in the nation (some other towns in the country will try to tell you that they hold that title, but it’s generally accepted that we are the true home of the oldest celebration). Our 4th of July is a serious point of pride among residents here. We do it up right! 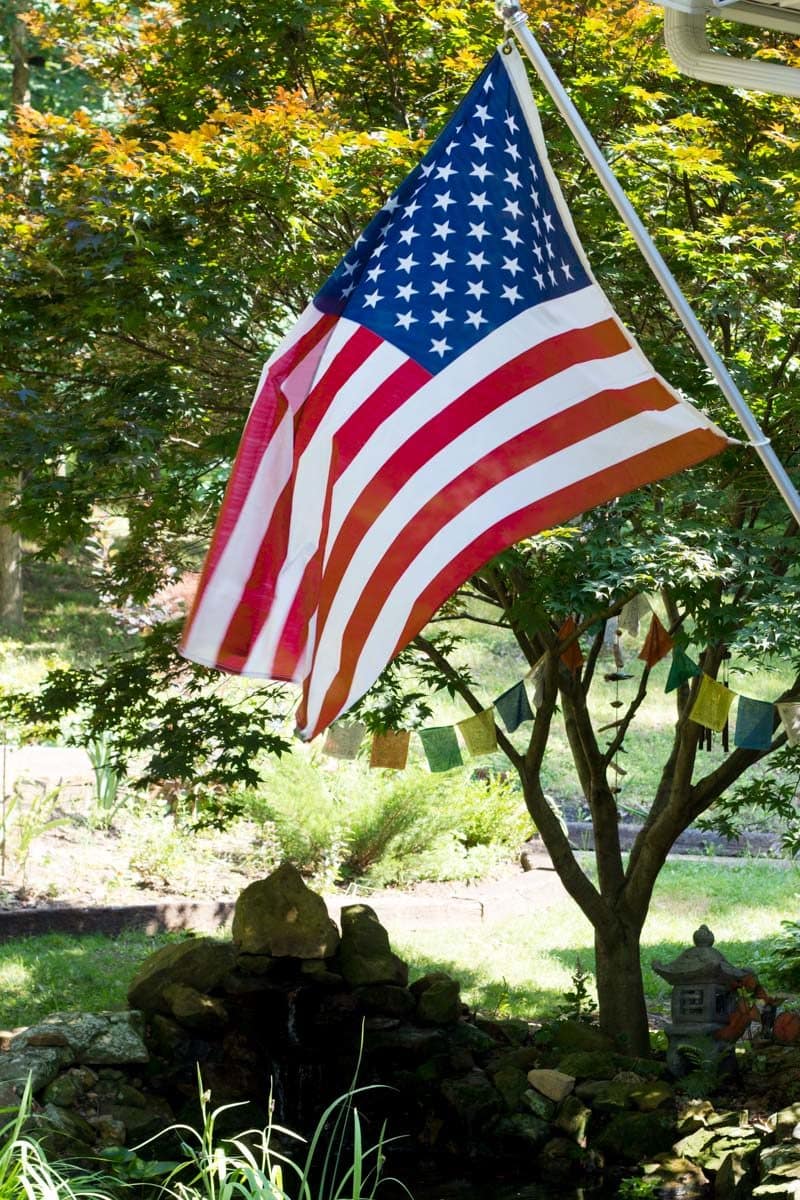 The parade is the cornerstone event of the week-long celebration. It happens on 4th of July morning, and the whole town shuts down (including the major state highway that runs through the middle of town). Thousands of people from all over the country come out to the parade, and most townies either march in the parade or have marched in the past (ahem, I did as a Brownie scout and in color guard in high school). It’s a rite of passage! We were *thisclose* to entering Juniper and her Radio Flyer wagon into the parade this year, but figure we’ll wait until she’s a little bit older. Maybe next year!

Anywho, our tradition has been to go to the parade in the morning, and then mosey on over to the town park to check out the flea market and eat some funnel cakes. Then we head home, crack open a beer, and start work on one heck of an impressive feast to celebrate our awesome country.

Food and major holidays always seem to go hand-in-hand, but there is something particularly special about food on the 4th of July, no? Eating glorious, delicious food with family and friends is such a wonderful way to celebrate all of the opportunities this country affords us. There are a lot of things I dislike about my country, but at the end of the day, there is no where else I’d rather live (although, Canada, I <3 you, too—happy early birthday!). And no way I’d rather celebrate my freedom than by noshing on some delicious, homegrown eats. 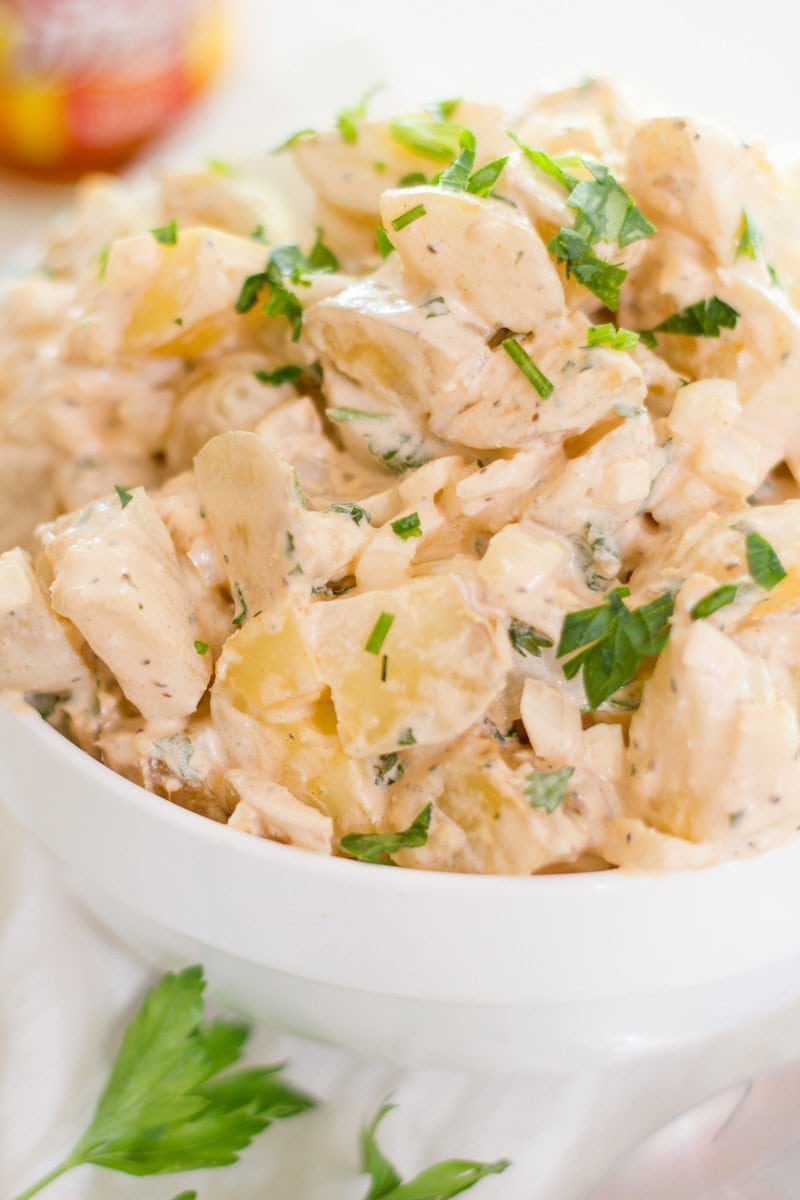 We planted a lot of potatoes this year. A lot. Like almost 200 feet of potatoes. And while our potatoes aren’t quite ready to harvest yet, they are starting to die back, and are getting close. So we’ve been harvesting a few plants at a time to sneak some potatoes for fresh eating.

We grew some amazingly fun potatoes this year. We have five different varieties in the batch, and all of them are super tasty, and some of them are even super beautiful. Check out this hot pink and purple (the picture doesn’t do them justice) spuds! How fun are these (they are Purple Vikings)? 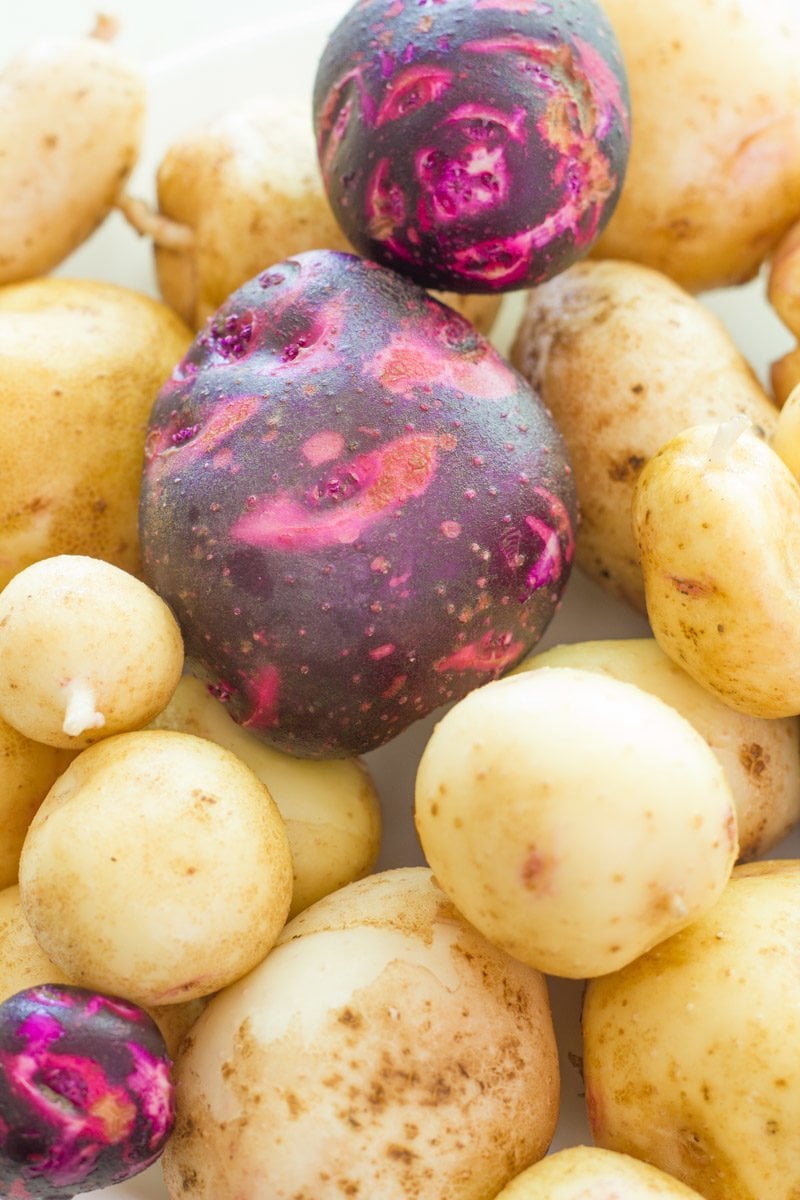 And while the Purple Vikings are mega cool, nothing beats a good old Yukon Gold potato for cooking with. They are creamy, tender, and packed full of potato-rific flavor. They are the perfect base potato for potato salads! Traditional potato salad is awesome, but I love getting crazy with potato salad flavors. It’s such a fun base to experiment with!

Last week, I had some leftover blue cheese (from these) that was just asking to made into something special. I love the combo of buffalo sauce spiciness and the cool earthiness of blue cheese—and I imagined it’d be a great friend to potato salad. And I was totally right! This buffalo blue cheese potato salad is insane. 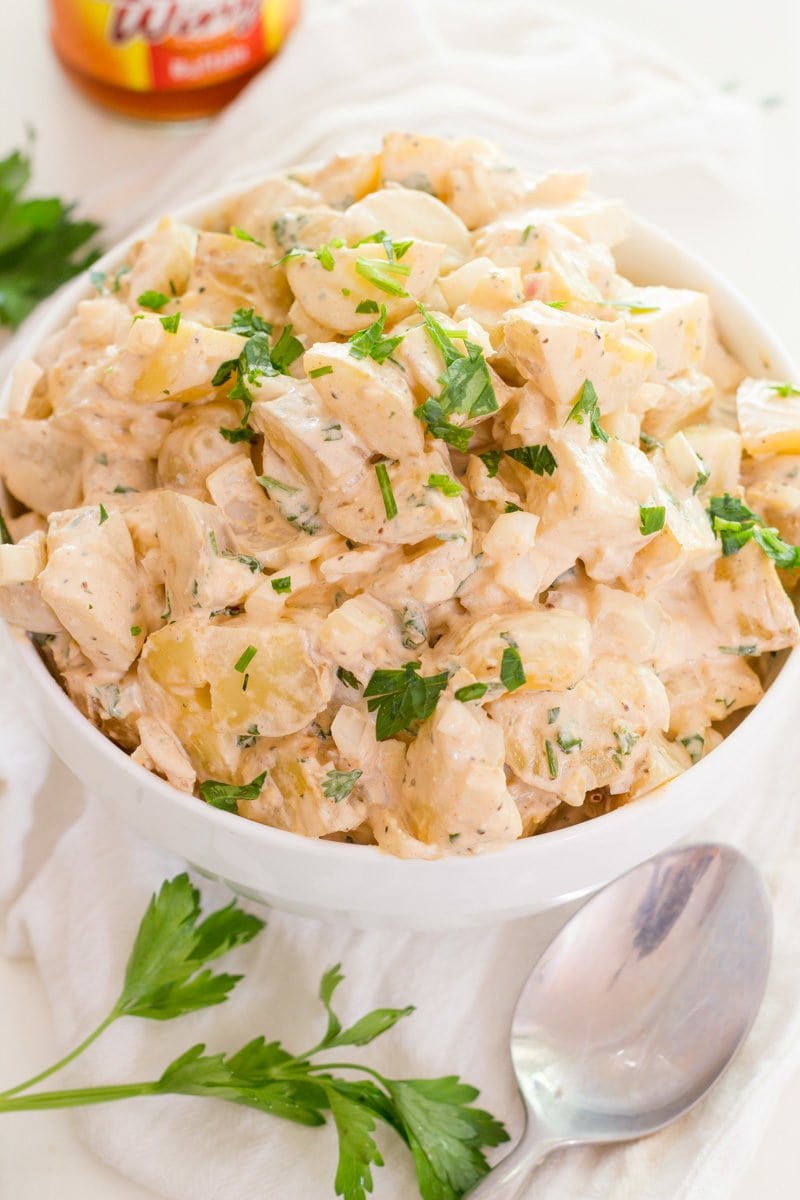 To make this potato salad trend healthier, I replaced part of the heapload of mayo that most potato salad recipes call for with protein-packed Greek yogurt. I’m not a mayo hater (not by a long shot), but it’s nice to mix it up with something a little lighter.

If you’re a cilantro hater, you can skip the cilantro (although, I’ll be sad, because cilantro is amazing—end of discussion). I recommend replacing it with some finely minced parsley or chives, just to add a little bit of color and a touch of fresh flavor. Enjoy!