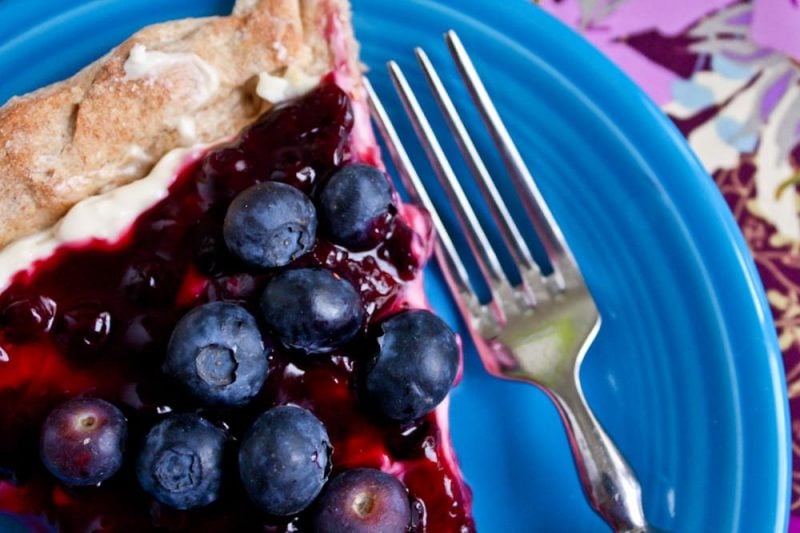 One of my very favorite characteristics of breakfast is its complete abandon of the typical savory-to-sweet meal rules and regulations. 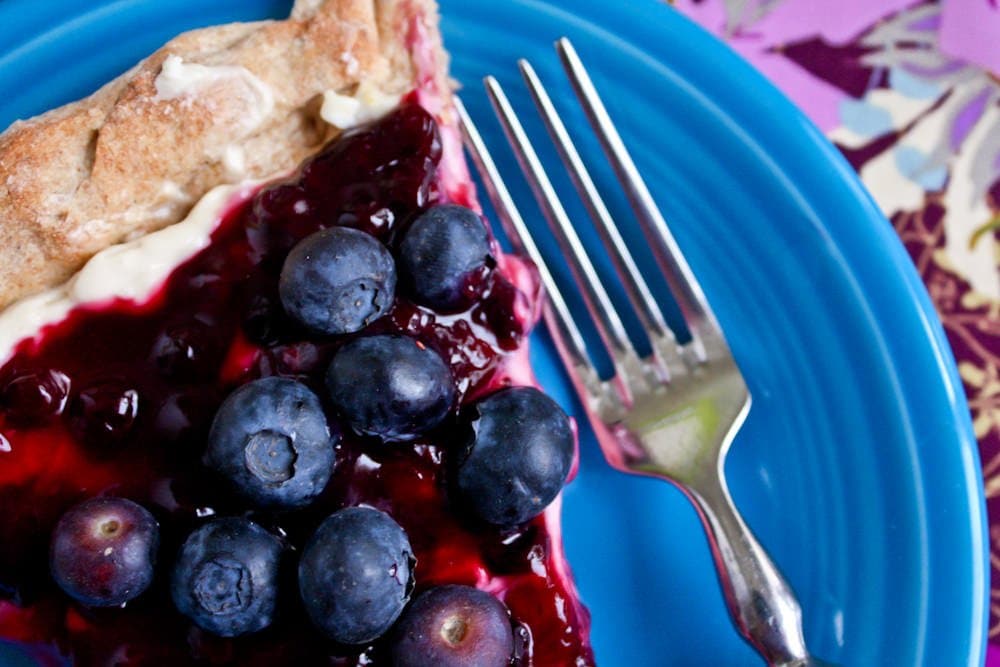 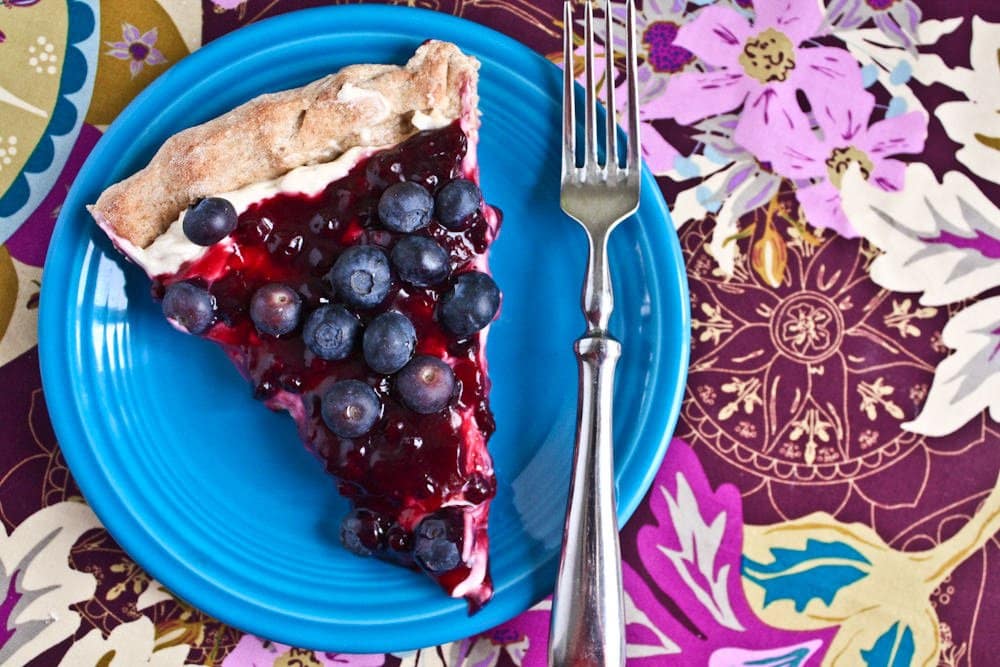 And really, who doesn’t want to start their day off with dessert? 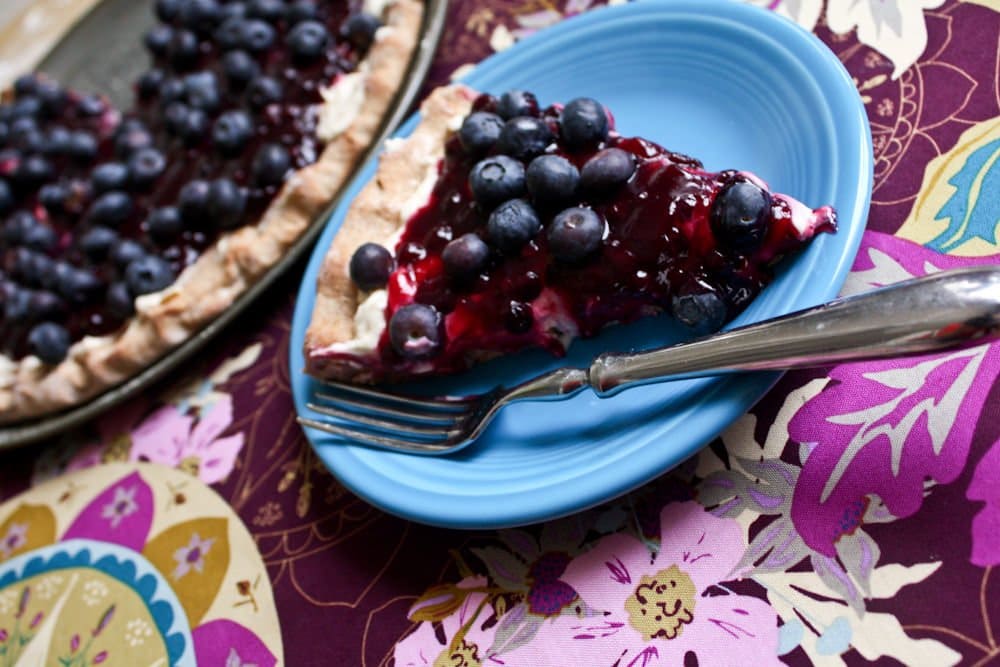 Despite its whole wheat crust and fresh fruit, this breakfast pizza doesn’t just straddle the line between breakfast and dessert, it jumps over the line and runs so far into dessert territory that the border isn’t even in sight anymore. 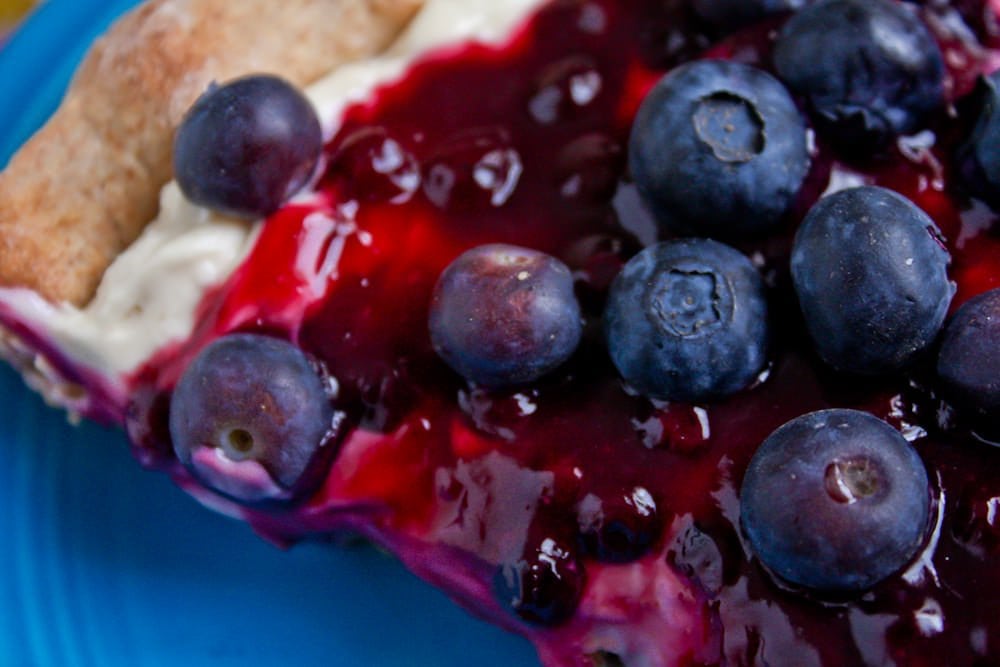 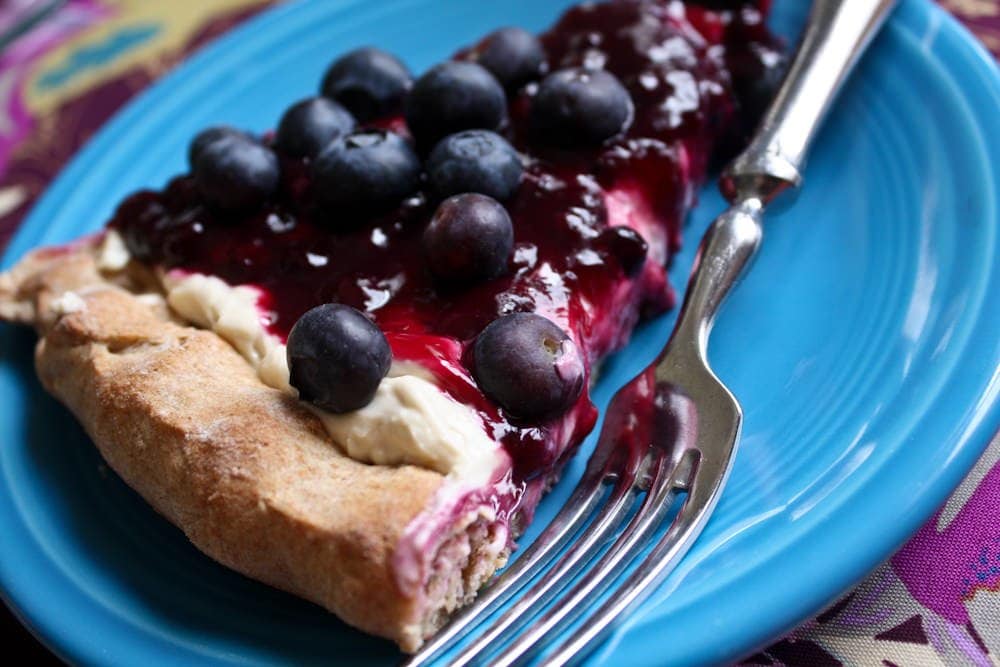 Plus additional fresh blueberries for topping, about 1/2 cup.

For crust: Preheat oven to 450°. Place all ingredients (in order) in the bowl of a mixer fitted with a dough hook. Turn on low until just combined, then increased speed to medium-low and let dough mix until soft and smooth, about 7 minutes. Form into ball, coat with cooking spray and return to bowl. Cover and let rise in a warm place for 10 minutes. After rising, form into disc and roll out on floured surface to fit a 14″ pizza pan. Place in greased pan and roll in edges if necessary. Cut slits into crust and bake for 10 minutes, or until the crust is golden brown and cooked through.

For blueberry syrup: combine blueberries, orange juice and sucanat in a saucepan over medium-low heat. Bring to a boil. Mix cornstarch and water in a small bowl, and then stir into boiling syrup mixture. Sauce should thicken immediately. Boil for 1 minute and then remove from heat.

To assemble: Spread cream cheese over cooled crust. Top with sauce and sprinkle with fresh blueberries. Cut into 8 slices. 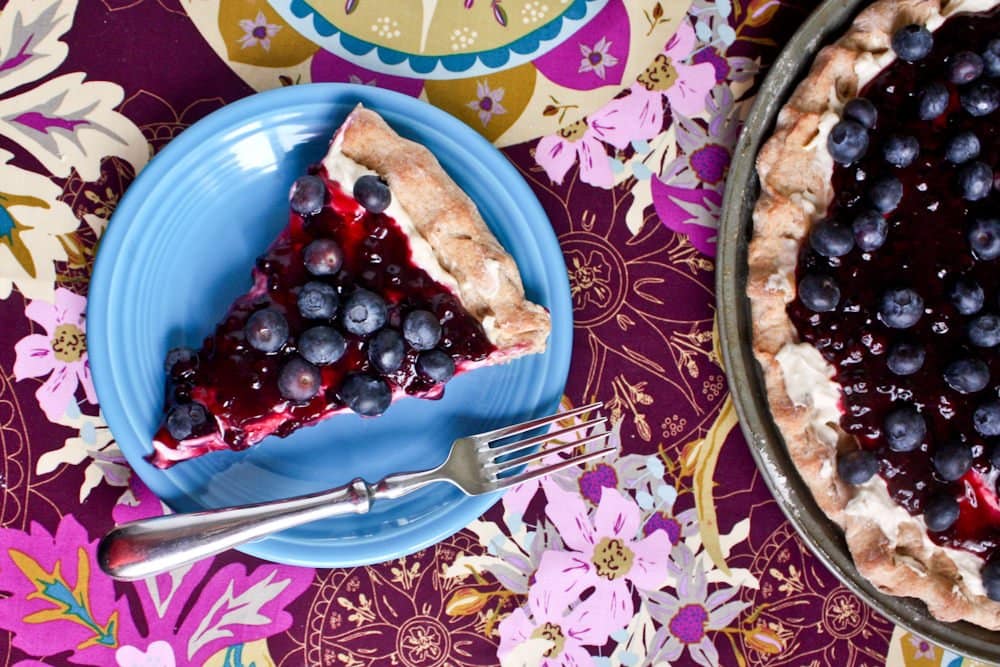 I know that recipe look complicated, but I promise you, it isn’t. I pulled the whole pizza together in under 30 minutes. 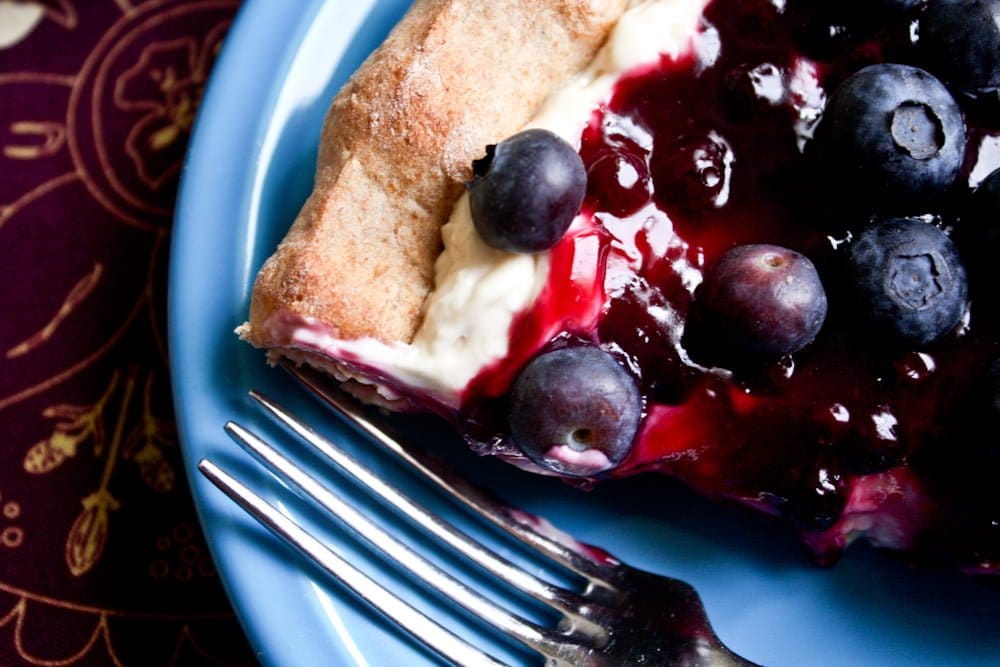 First step is to pull together the crust. I used my standard pizza crust but slightly modified to be sweet instead of savory (garlic blueberry lemon breakfast pizza just didn’t sound as appealing). 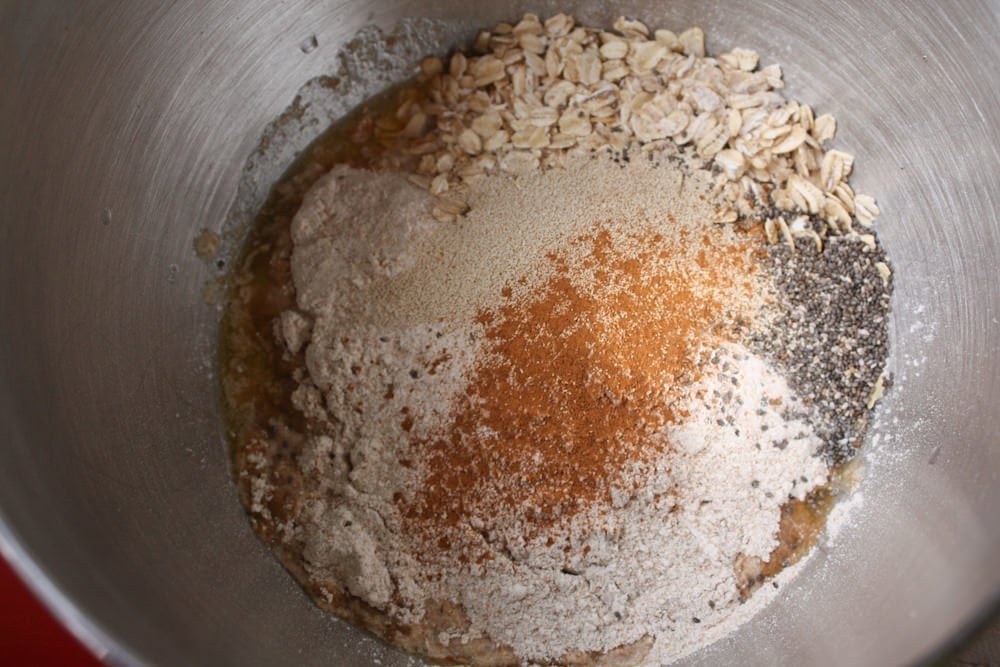 In place of garlic, I used cinnamon. In place of olive oil, melted butter. Honey for sugar. And replaced some of the flour with oats and chia seeds. Method is the same, though. Mix until incorporated. 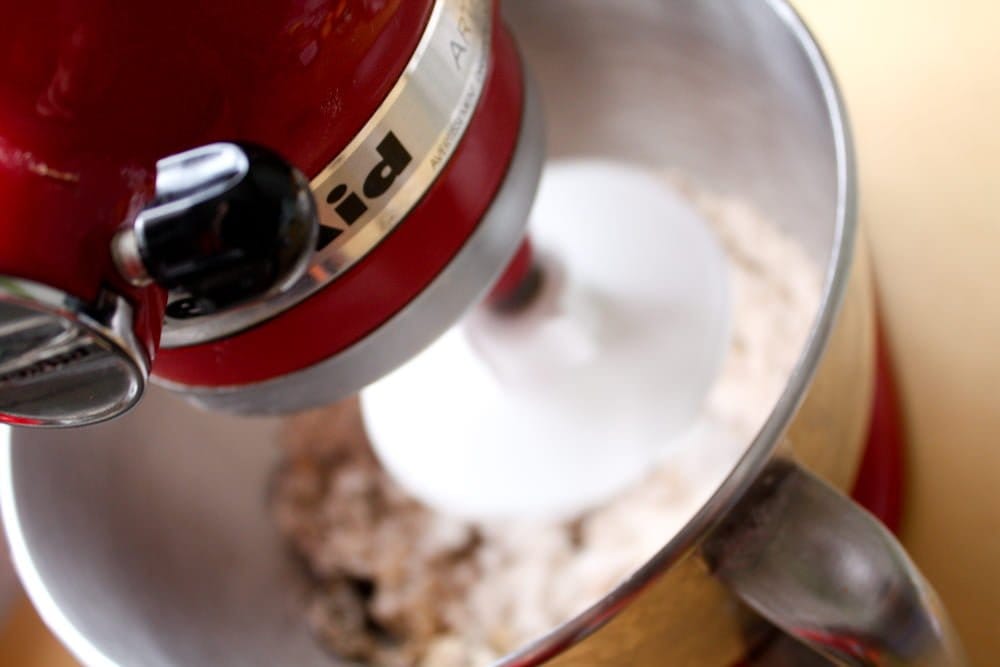 Then up the power and let the mixer knead the dough for 5-7 minutes, or until it is smooth and unsticky. 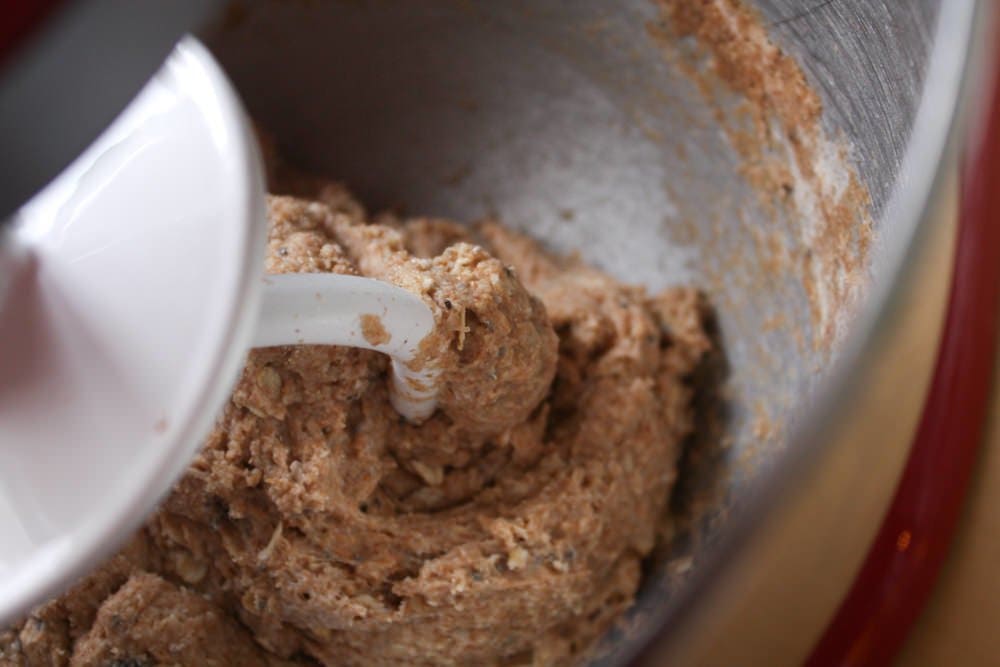 Form into a ball, coat with cooking spray, cover and let rise in a warm spot for 10 minutes. 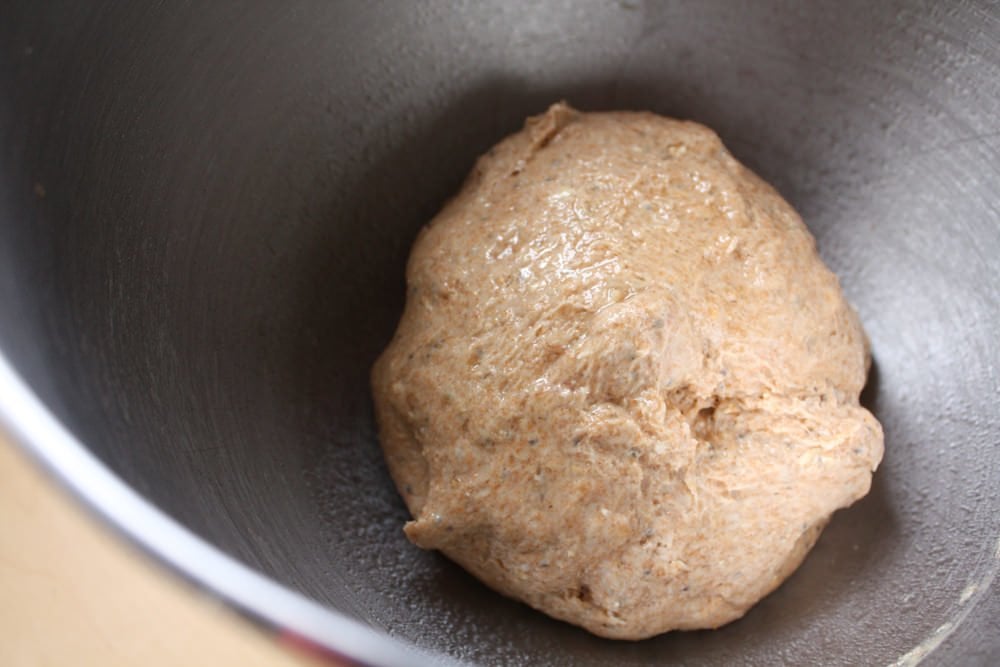 Meanwhile, we can make the blueberry sauce and cream cheese. Combine orange juice, frozen blueberries and sucanat in a saucepan. 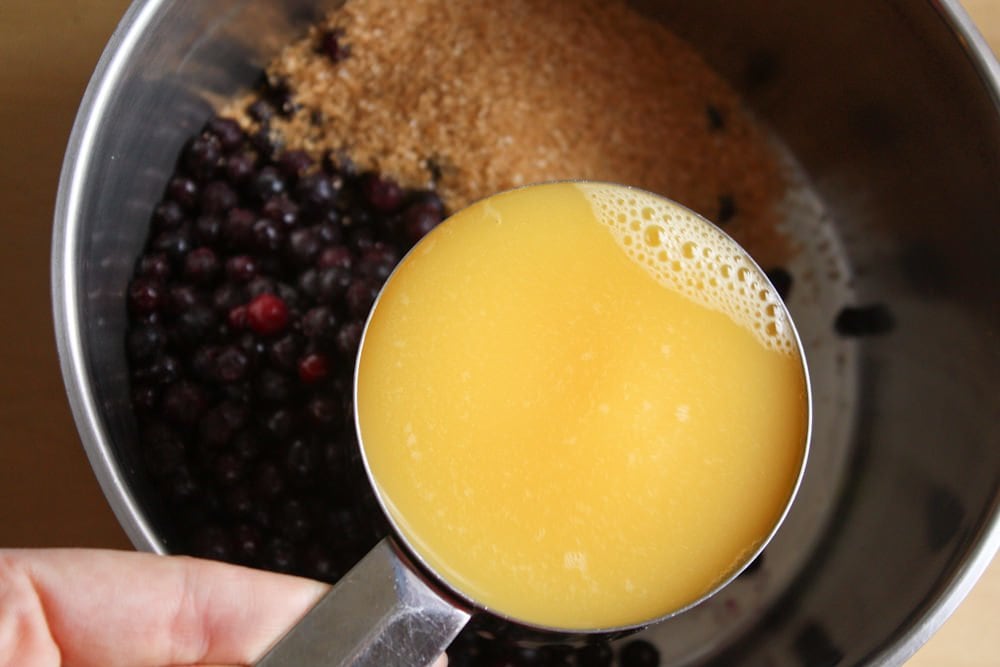 Heat on medium-high and bring to a boil. Mix some cornstarch with warm water and add to the syrup. Boil for another minute or so until it is nice and thick. Remove from heat. 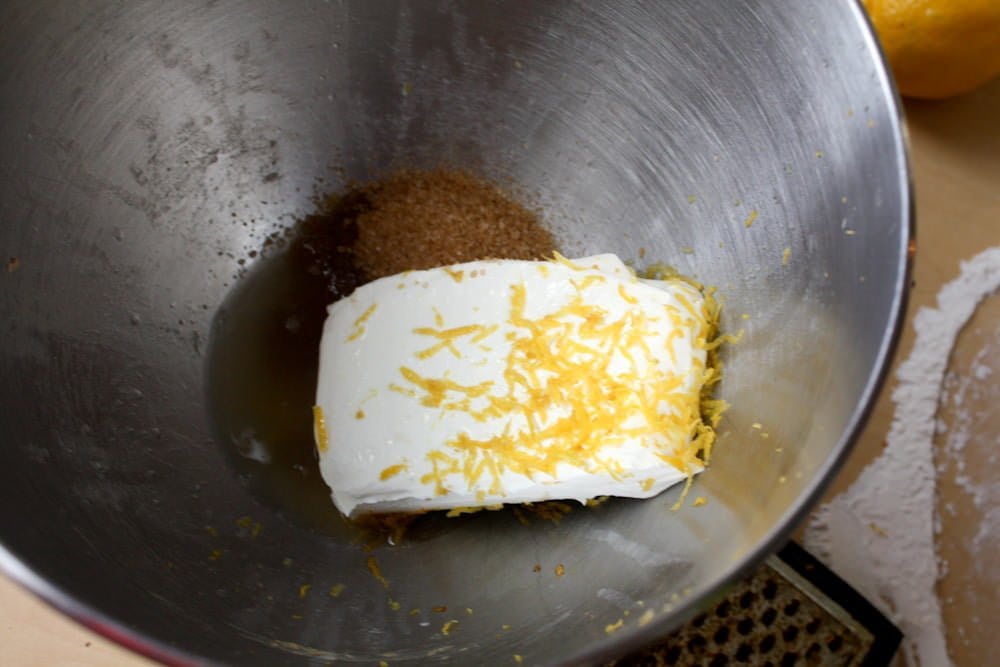 Whip at a hefty speed until smooth and fluffy, just a few minutes. 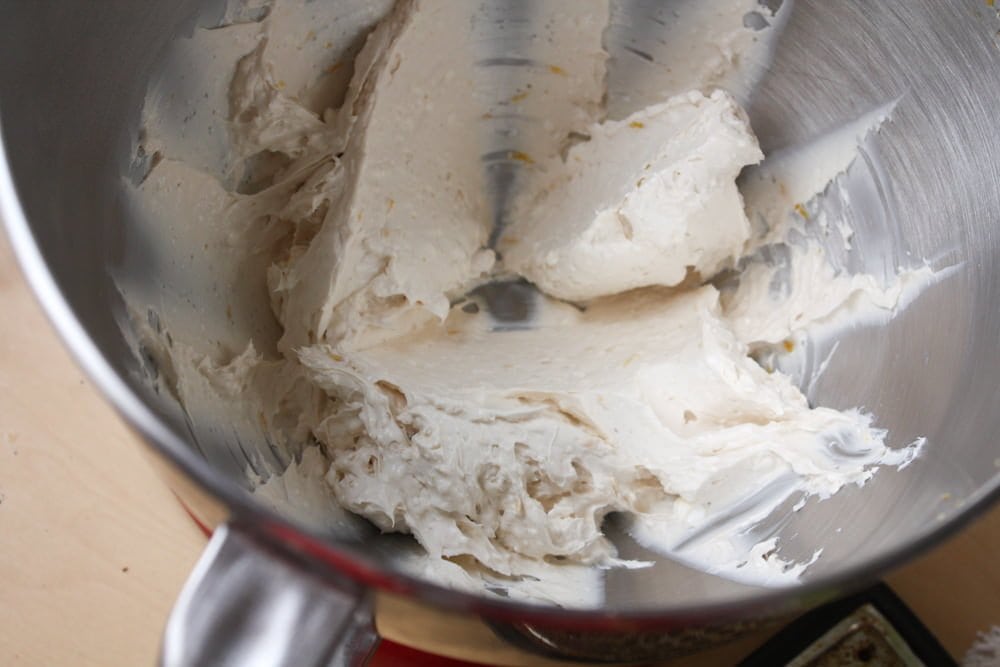 Set the cream cheese and blueberry sauce aside and move back to the crust. Preheat oven to 450° and form dough into a disc on a floured surface. 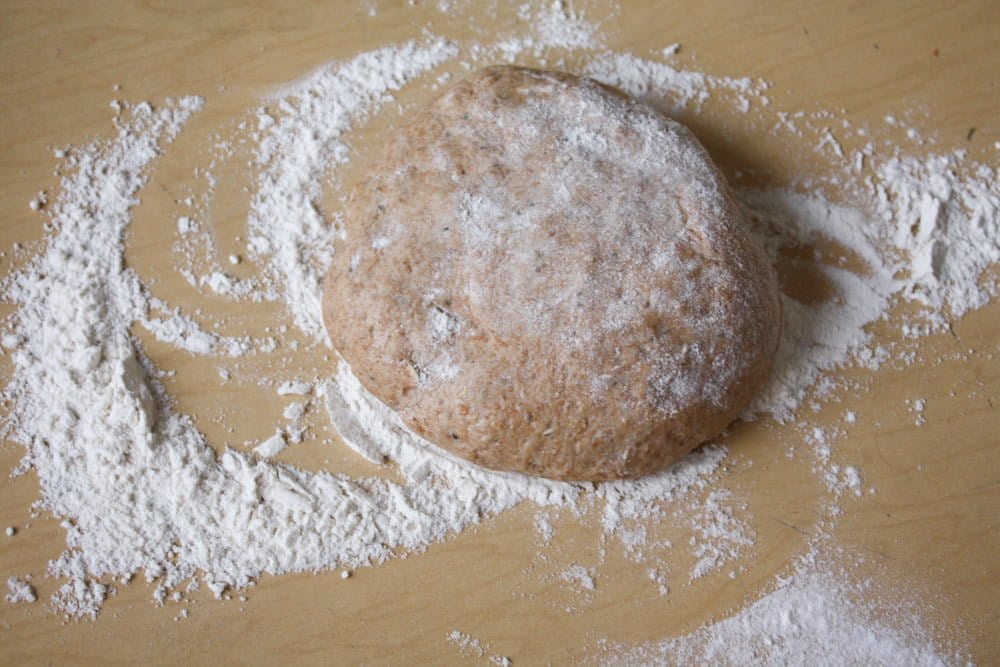 Roll out to be just a bit bigger than your 14″ pizza pan. 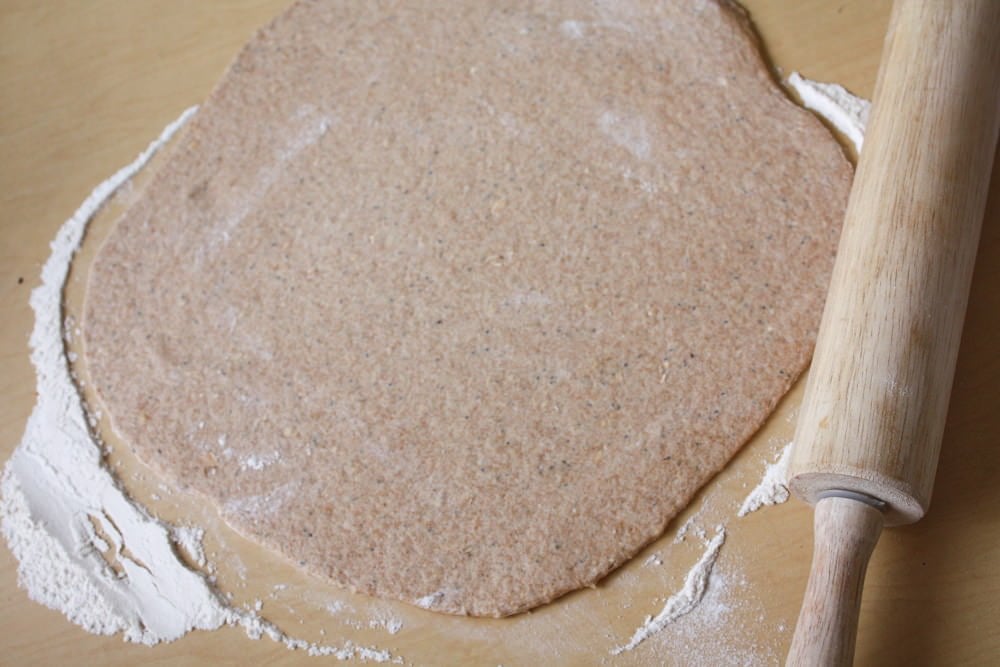 Place in greased pan and either trim, roll in or crimp the edges. 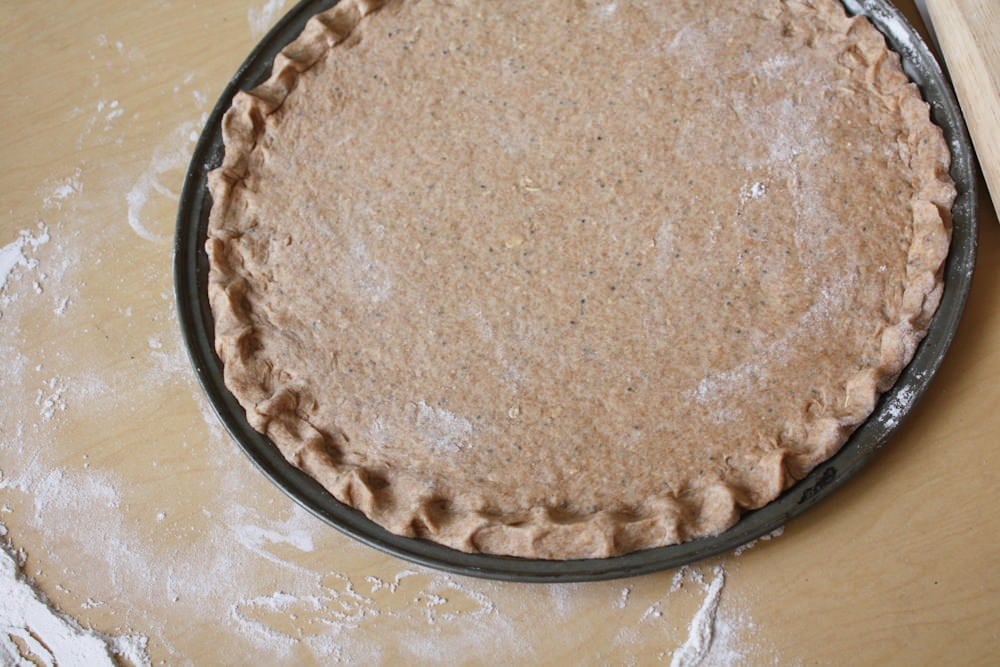 Poke holes in the middle of the crust with a fork, and then bake for 10 minutes in the preheated oven. Or until it is brown and looks something like this: 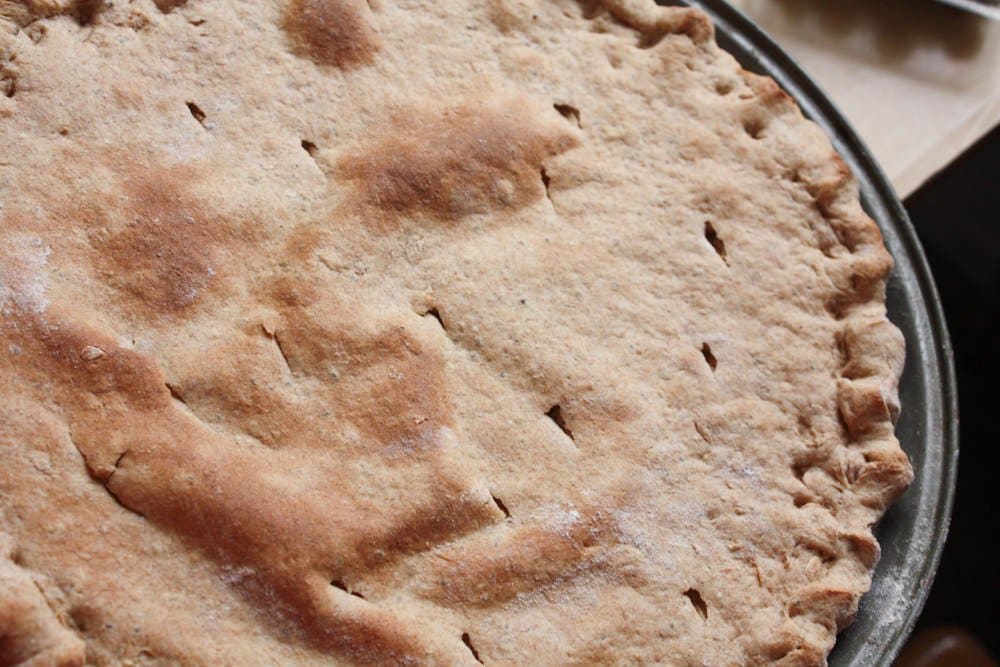 Now, assembly time! Spread on the cream cheese (and try to resist the urge to just eat it from the bowl with a spoon). 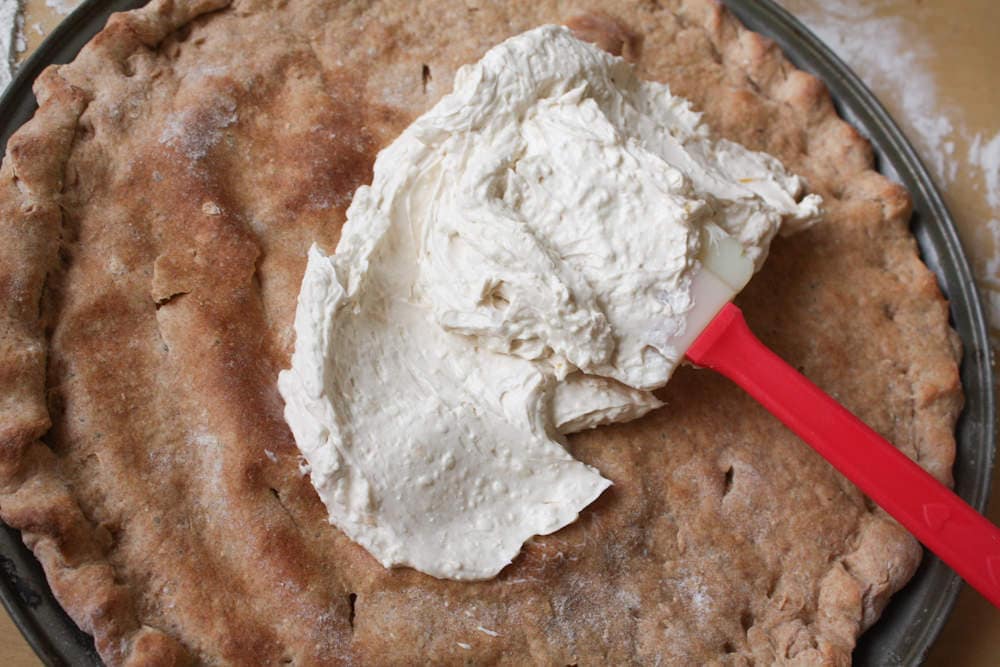 It doesn’t need to be perfect, just cover the crust nicely. 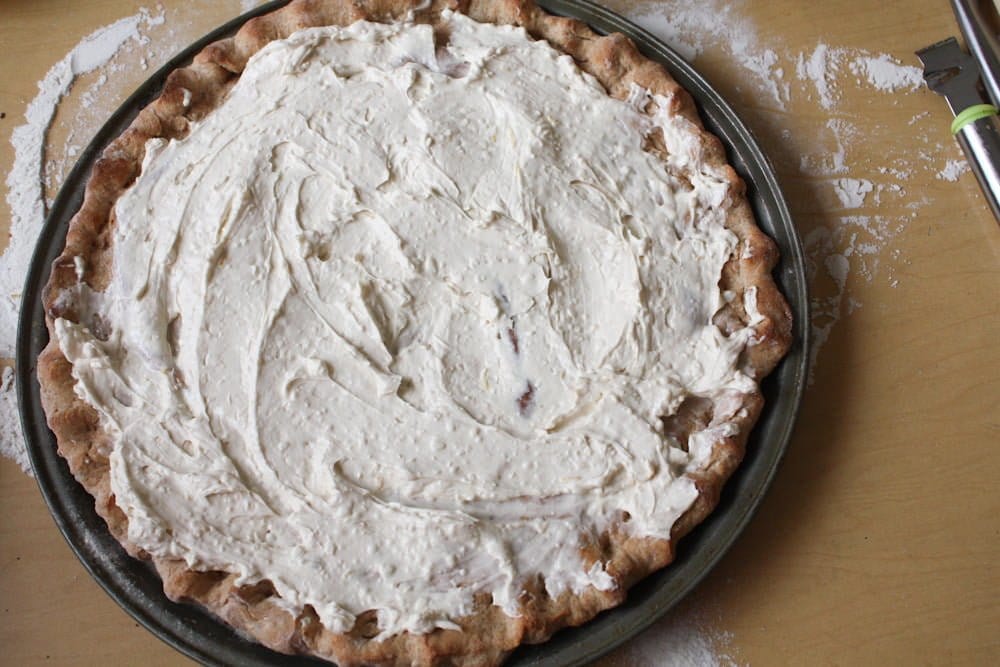 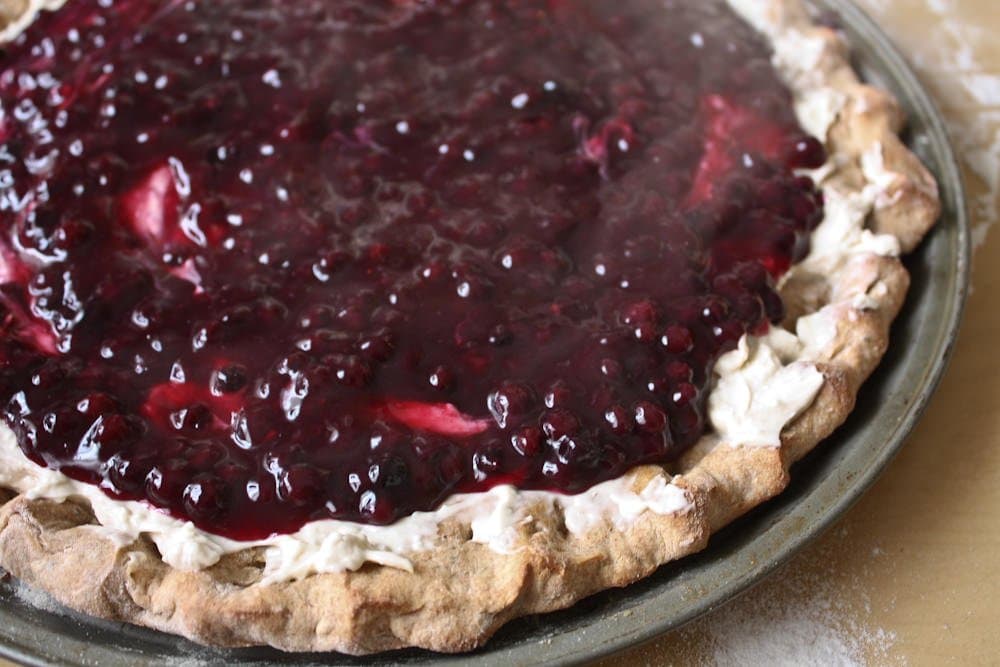 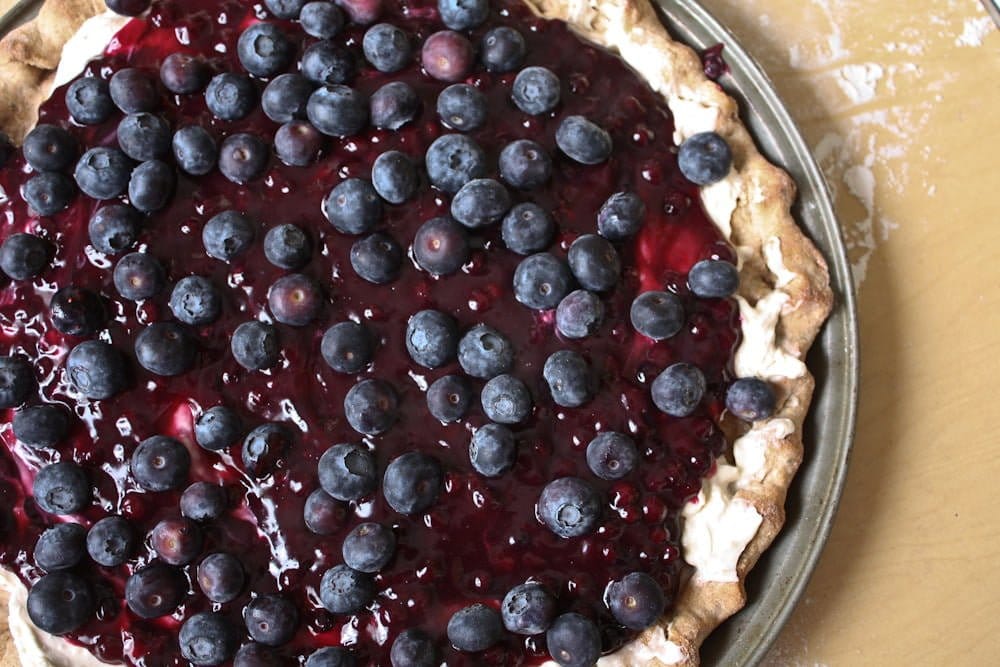 Marvel in your creation. 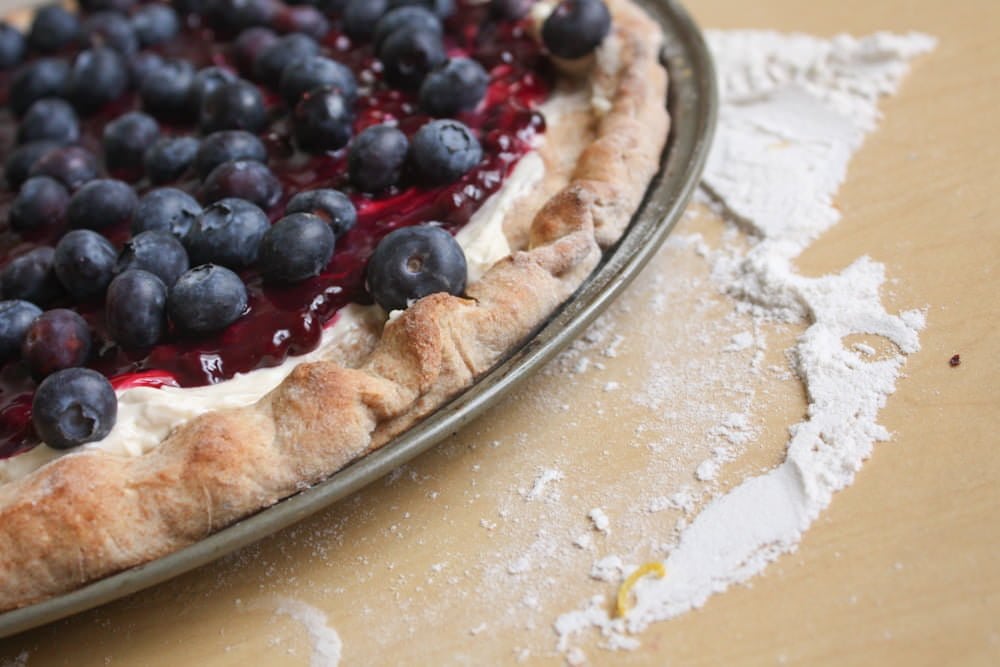 Cut into eight slices and prepare for the ground you walk on to be worshiped. 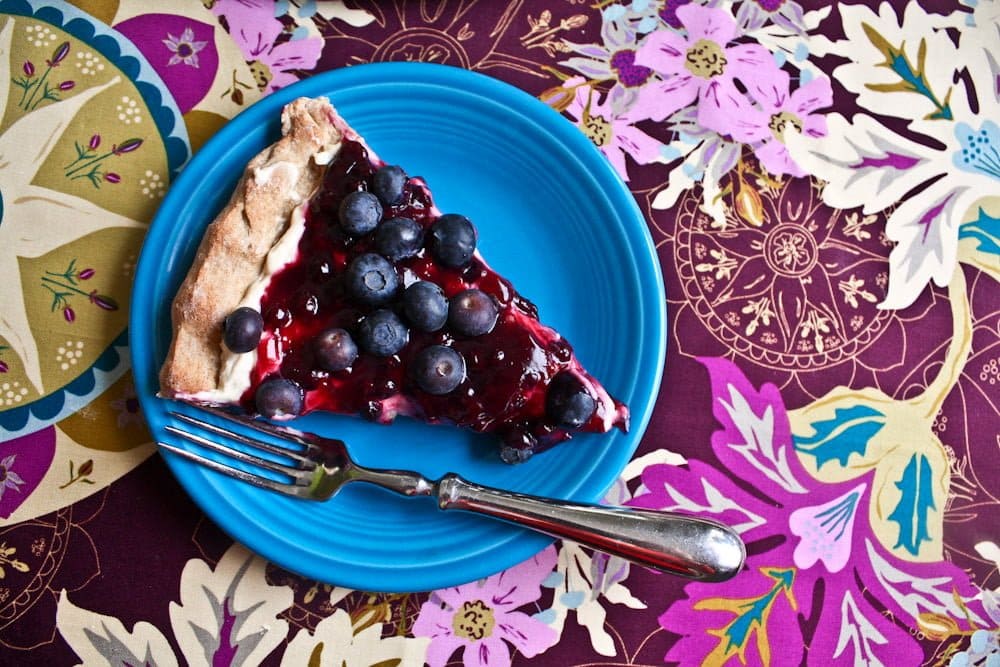 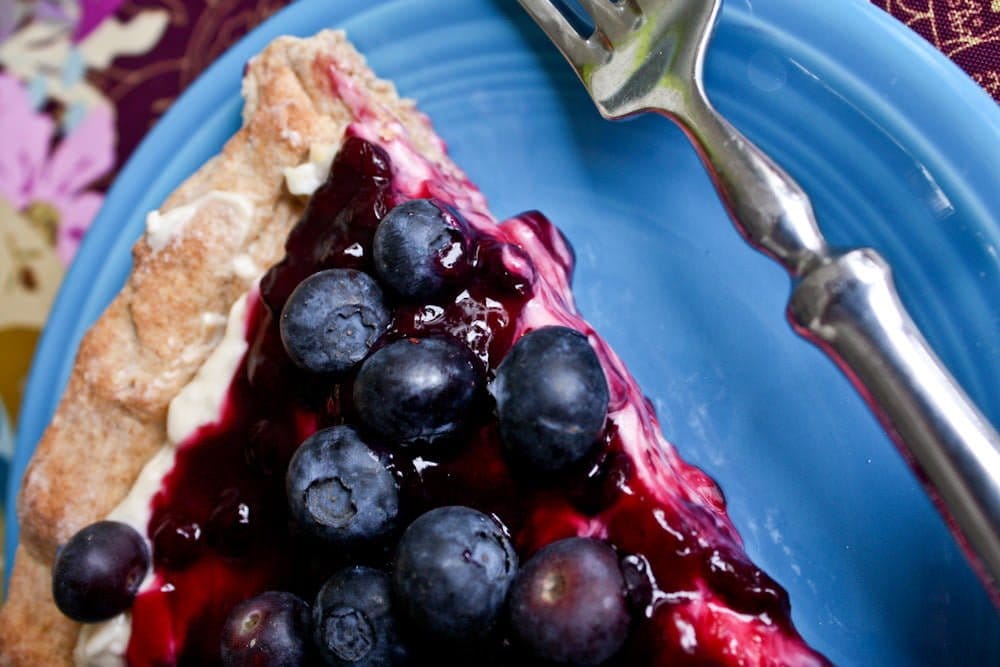 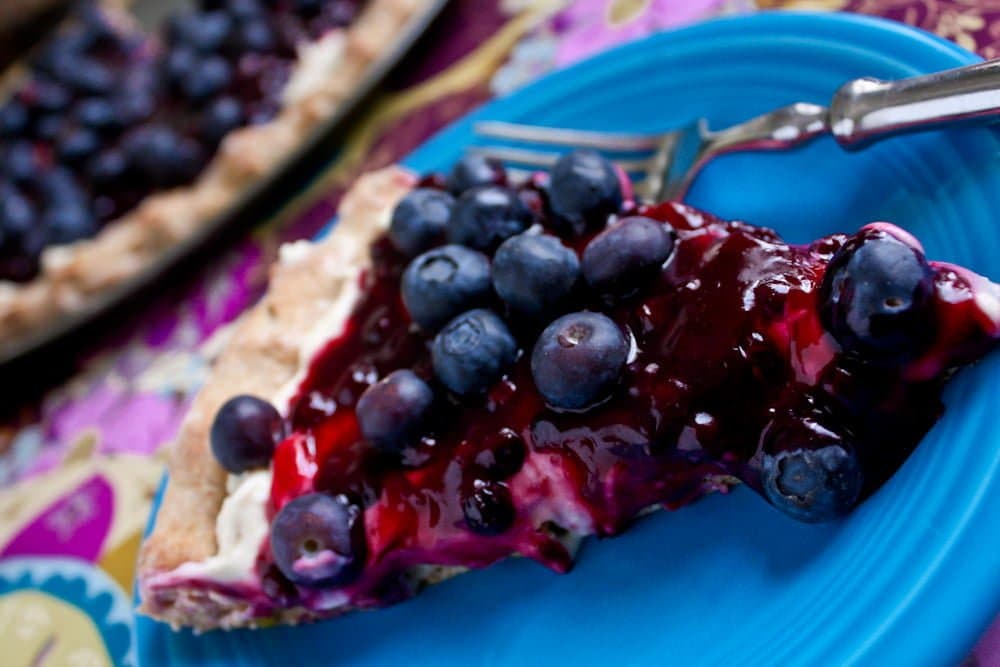 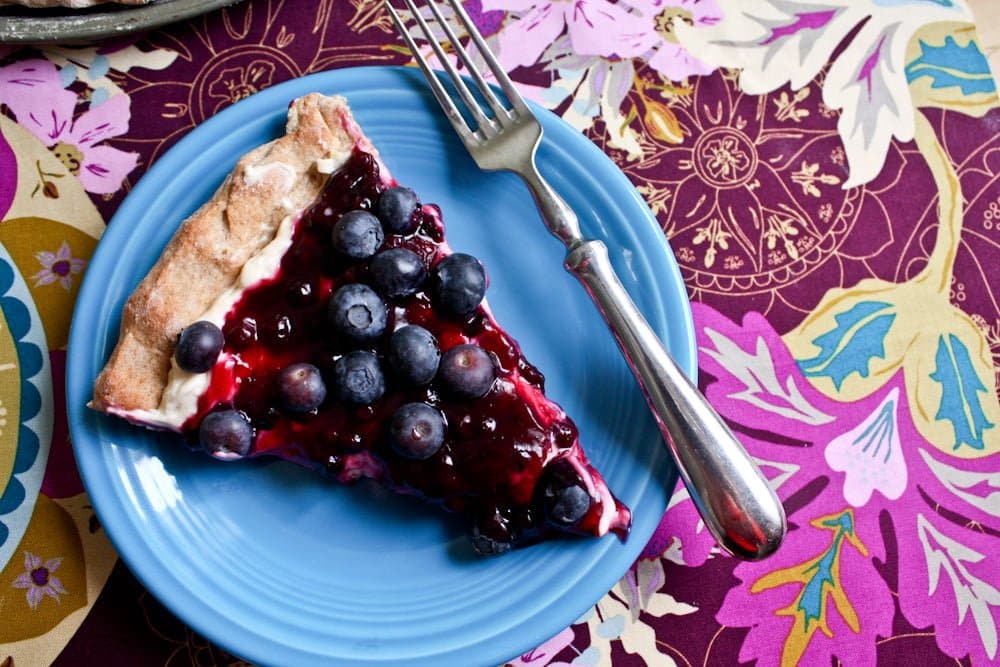