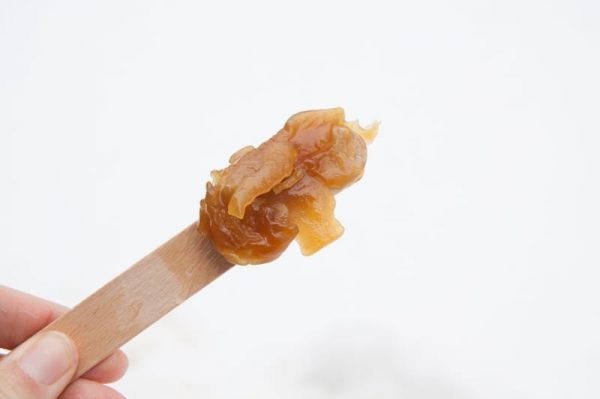 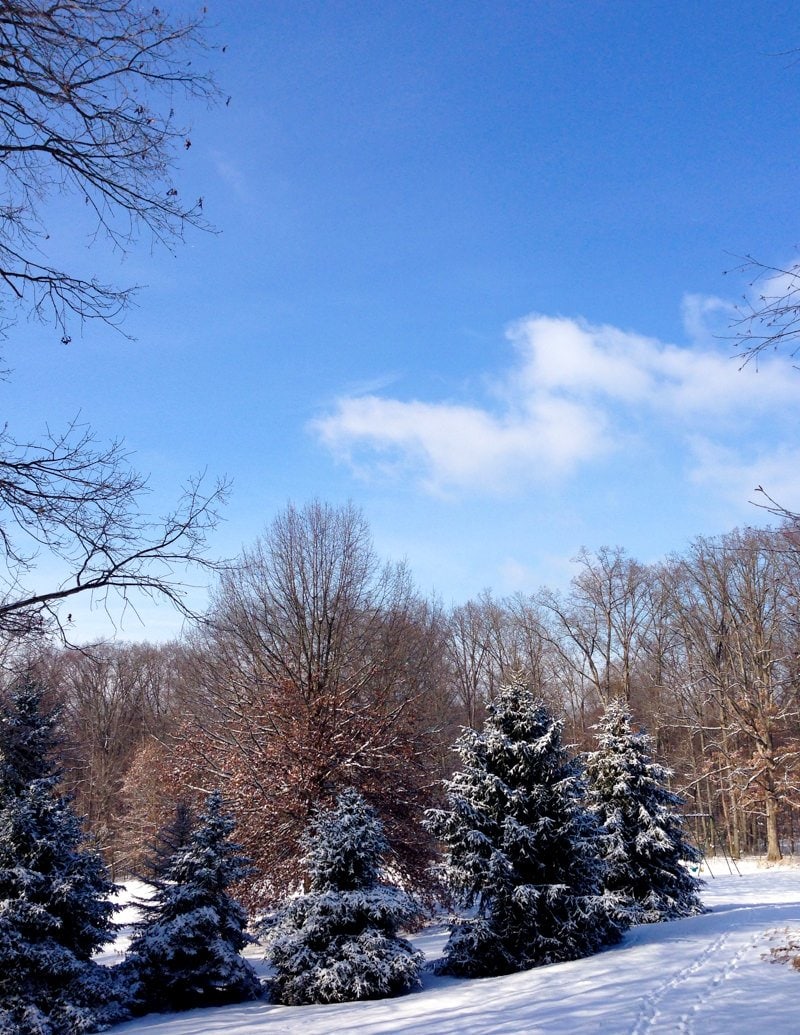 Man, what a fantastic snowed in weekend we had! We had a pretty nasty winter storm come through here on Friday, and after dropping a ton of ice and sleet, the storm decided to finally bless us with some snow. Some of the forecasts were calling for almost a foot of snow here—we only ended up getting about 6″, but that’s plenty enough to turn this place into a winter wonderland!

And definitely plenty enough (combined with the sleet and ice) to make the curvy country roads here totally impassable. Our county has been under a no-travel state of emergency all weekend (it was finally lifted to just a “travel advisory” last night). Fine by me. We didn’t have anywhere to go. In fact, it was kinda nice not to even be able to go somewhere if we wanted to. Snowed in, indeed. 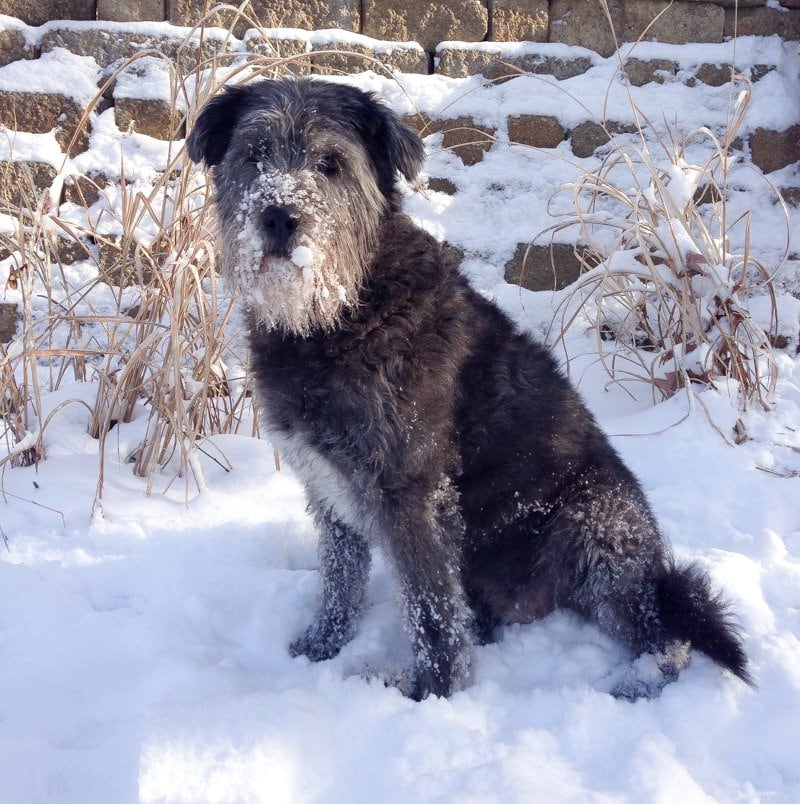 Growing up, snow days always meant making snow ice cream. But now that we’re fully ingrained in maple syrup culture (if you missed it, we make our own maple syrup), we learned about another awesome snow day treat—maple syrup taffy. It’s basically caramels made from real maple syrup that are insta-cooled by snow, making them ready to eat in just a few seconds. And it’s something that a lot of folks in the maple syrup regions are familiar with. 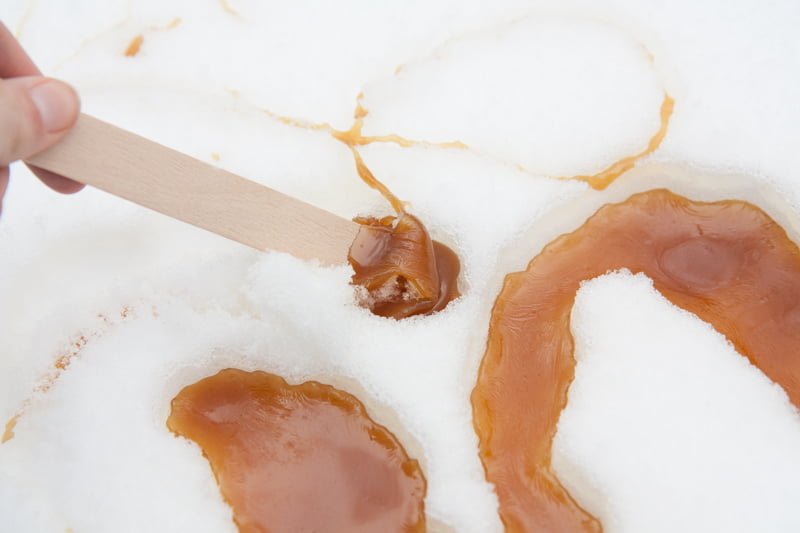 This was my first time making maple syrup taffy, and it was so fun! Caramels are absolutely one of my favorite homemade candies (see this recipe for yumminess), but I hate that they take so long. All the boiling and cooling means that it can be hours and hours before you actually get to eat a darn caramel! Thanks to the small batch of this candy, plus the insta-cooling action of the snow, you can go from no candy to candy in about five minutes. Win.

To make maple syrup snow taffy, in a heavy-bottomed saucepan, mix together 1/2 cup pure (the real stuff!) maple syrup, 2 tablespoons of butter and a pinch of sea salt. You can also go totally pure and just use maple syrup, but I love the caramel-y addition of the butter and salt. 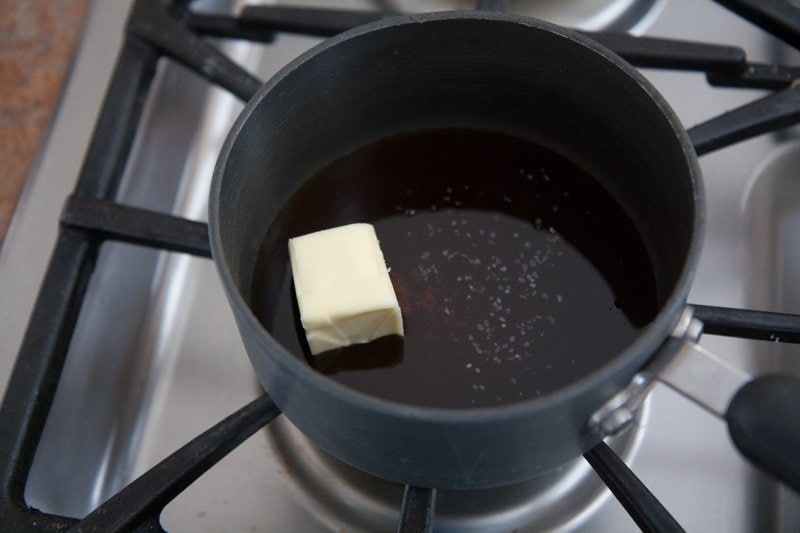 Bring it a boil, stirring frequently. You’ll want a pot that’s at least twice the size of your syrup, it’ll do a lot of bubbling. 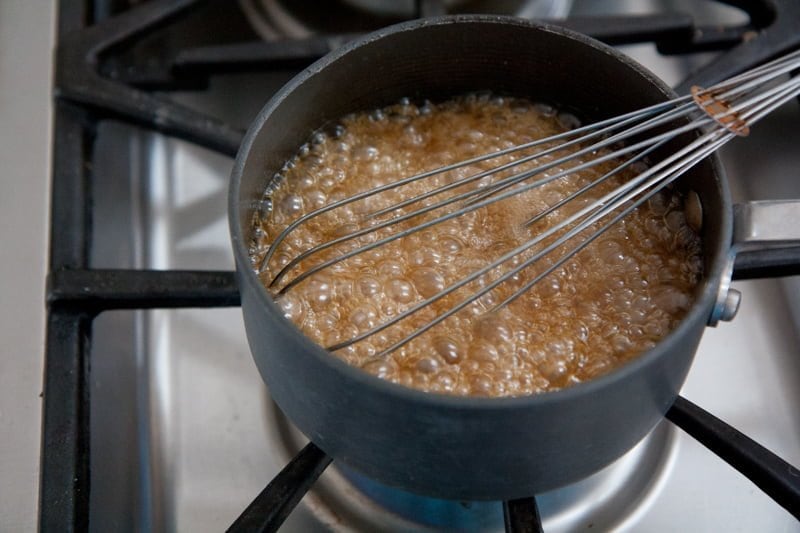 And then you pop in a thermometer, and once it hits 235° (soft ball stage), you can kill the heat, and go put on your snow boots. Since this is such a small amount of syrup, it’ll happen fast, it was less than five minutes from the time I turned on the burner to 235°. 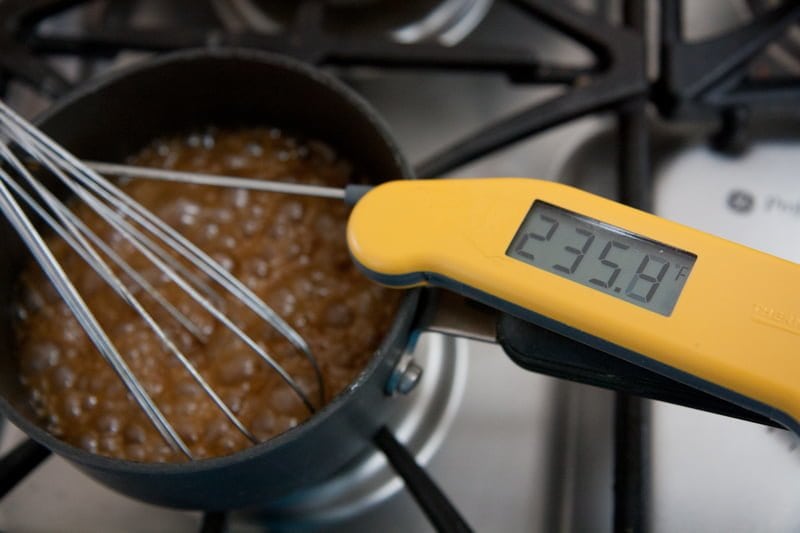 You’ll want to find a clean bank of snow for pouring. I just used the snow that had accumulated on our deck, mostly because it’s right outside the kitchen, but also because it was entirely untouched by animals. 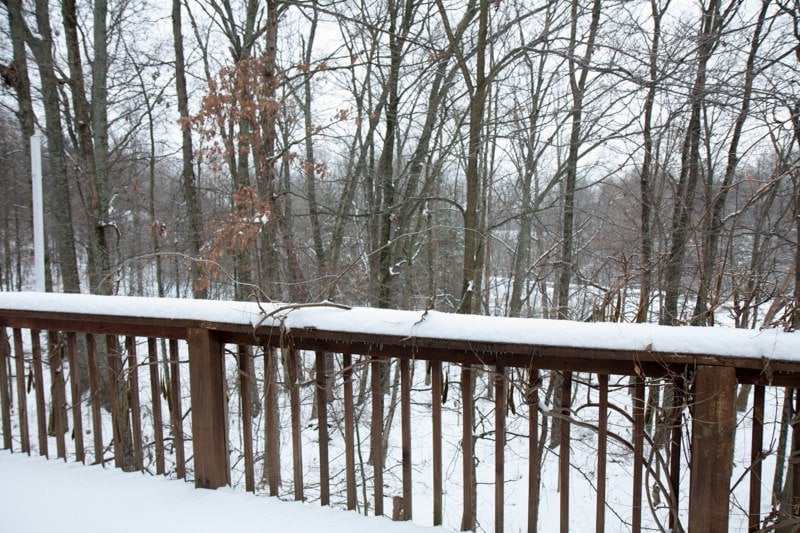 You could also scoop up a bunch of snow, put it in a pie plate, and do this part inside. But what’s the fun in that?

Next step is to slowly pour the syrup mixture onto the snow in ribbons. It might sink in a little bit, no worries. 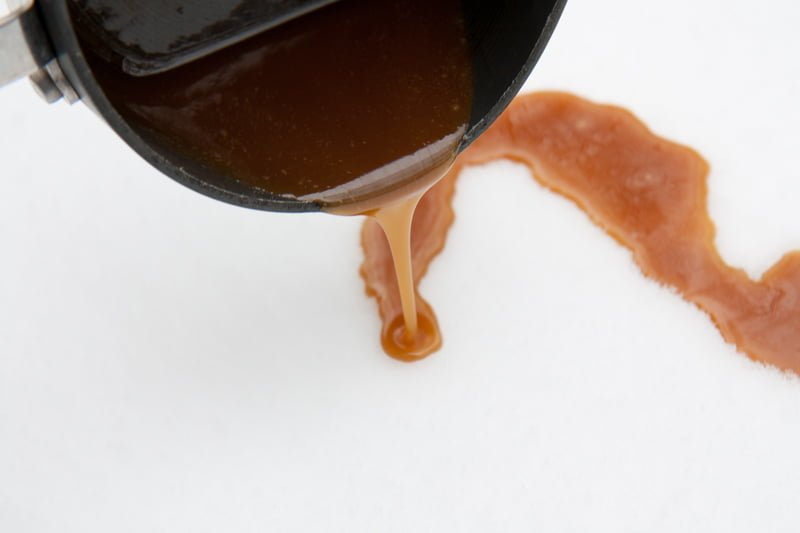 But for the most part, it’ll just stay right on top. And looks are deceiving, because it still looks like glassy liquid syrup… 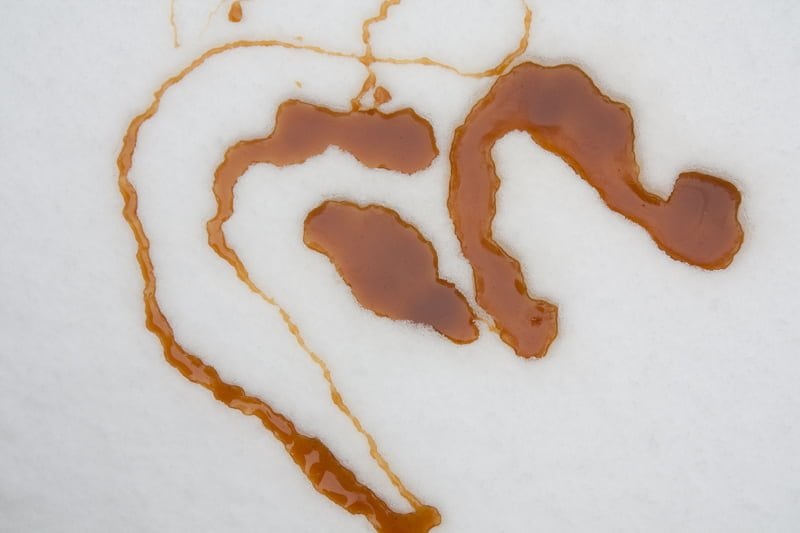 …but it isn’t! It’s been instantly transformed into ooey, gooey maple-flavored taffy. If you have a few popsicle sticks, you can scoop it up onto those. 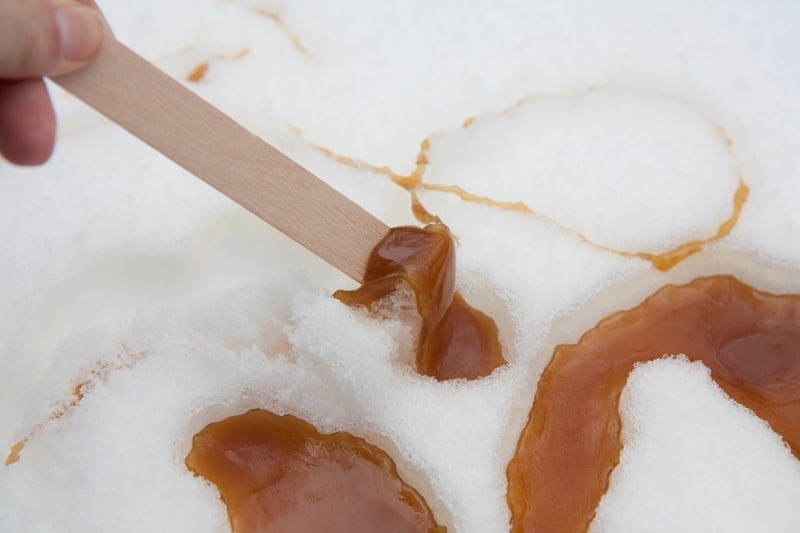 The taffy will be cold, but it will melt in your mouth, and be pretty much the best snow day treat ever. 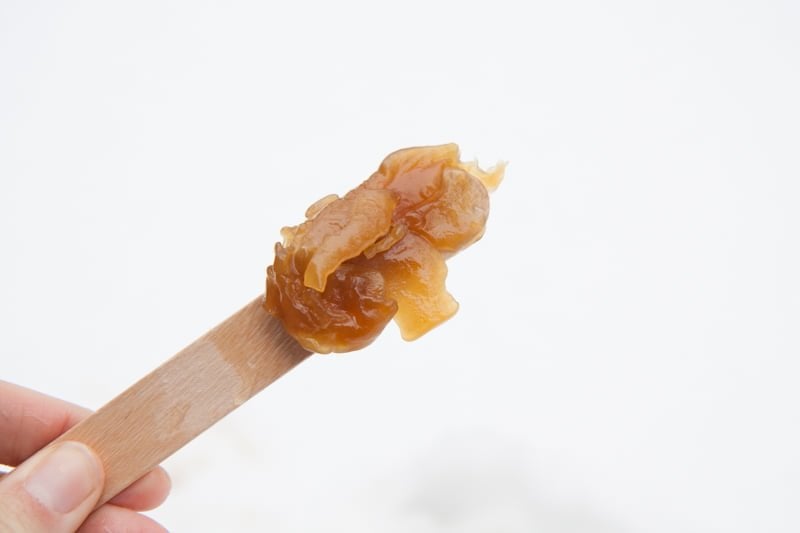 If there is any leftover, you can just pick it up with your hands, bring it inside and it’ll warm up and soften into a soft-set caramel. But trust me, it’s so good, it won’t make it that far. 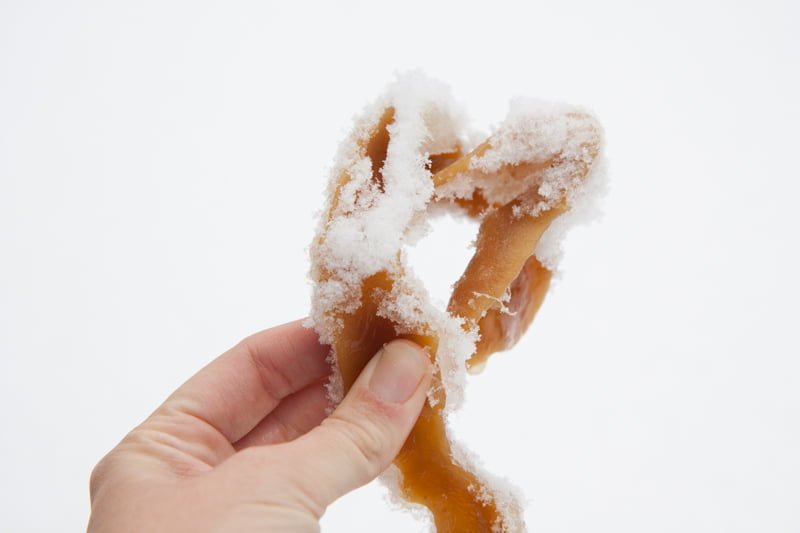 I love treats like this because they are so fleeting (at least in this region). We see a decent number of snowfalls each year, but it’s only a few times a year we get enough to make snow ice cream or maple syrup taffy, and it usually melts within a few days. Sure, you could make some shaved ice in the blender and fake it, but the whole appeal of snow day treats is that they’re reserved for those few days a year where everything slows down and simple treats like this are all you need to make a day special.

I hope you had an amazing weekend!

What’s your favorite thing about a snow day?