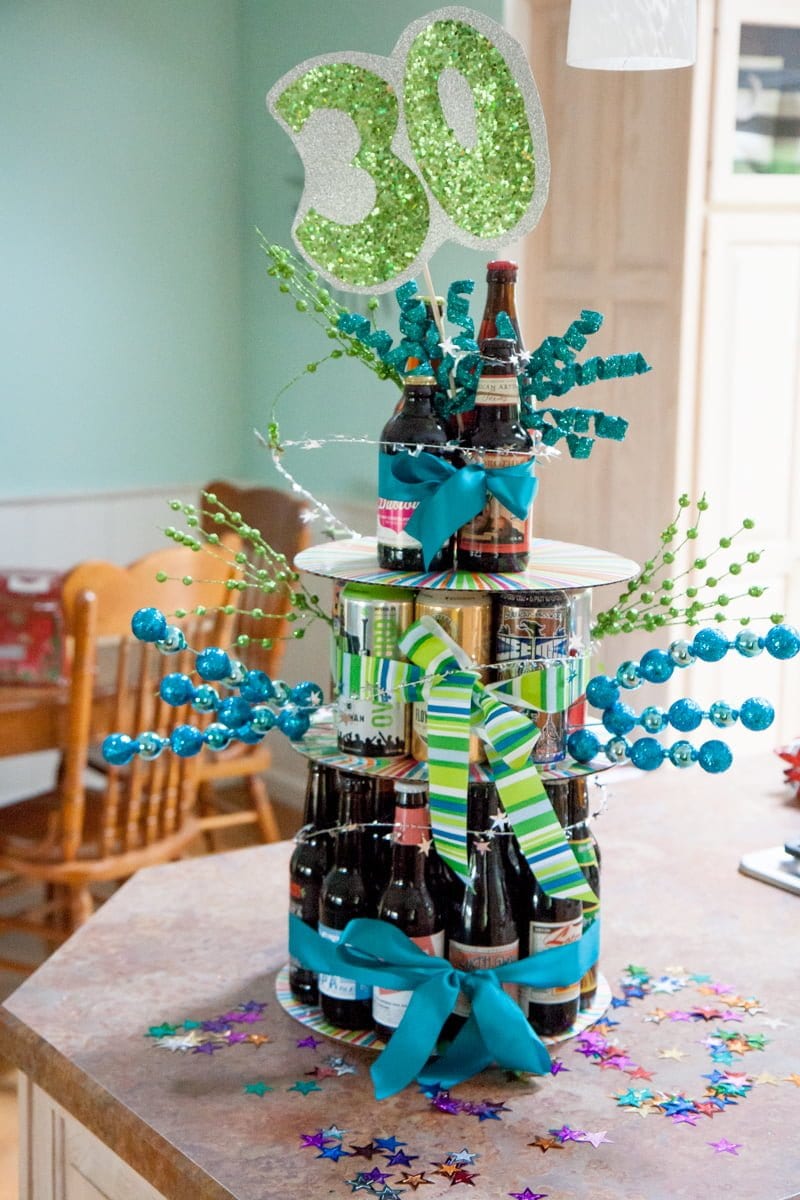 Earlier this week, I told you all about the actual birthday cake I made for my husband’s 30th birthday this past week. Now, it’s time for me to show you the other cake I made for him—a beer cake!

This was such a fun (and easy) gift to put together for him. We’re craft beer lovers, and I knew for a while I wanted to get him 30 different brews for 30 years on the planet—but I couldn’t quite figure out how to put it together in a fun way. Then, I saw a beer-can cake on display at some grocery store (made with crappy beer, but that’s not the point), and I knew I wanted to recreate it for him with a variety of craft brews. A few weeks later, Craig happened to pin a beer cake to his Pinterest wish list board, and I knew it was meant to be. 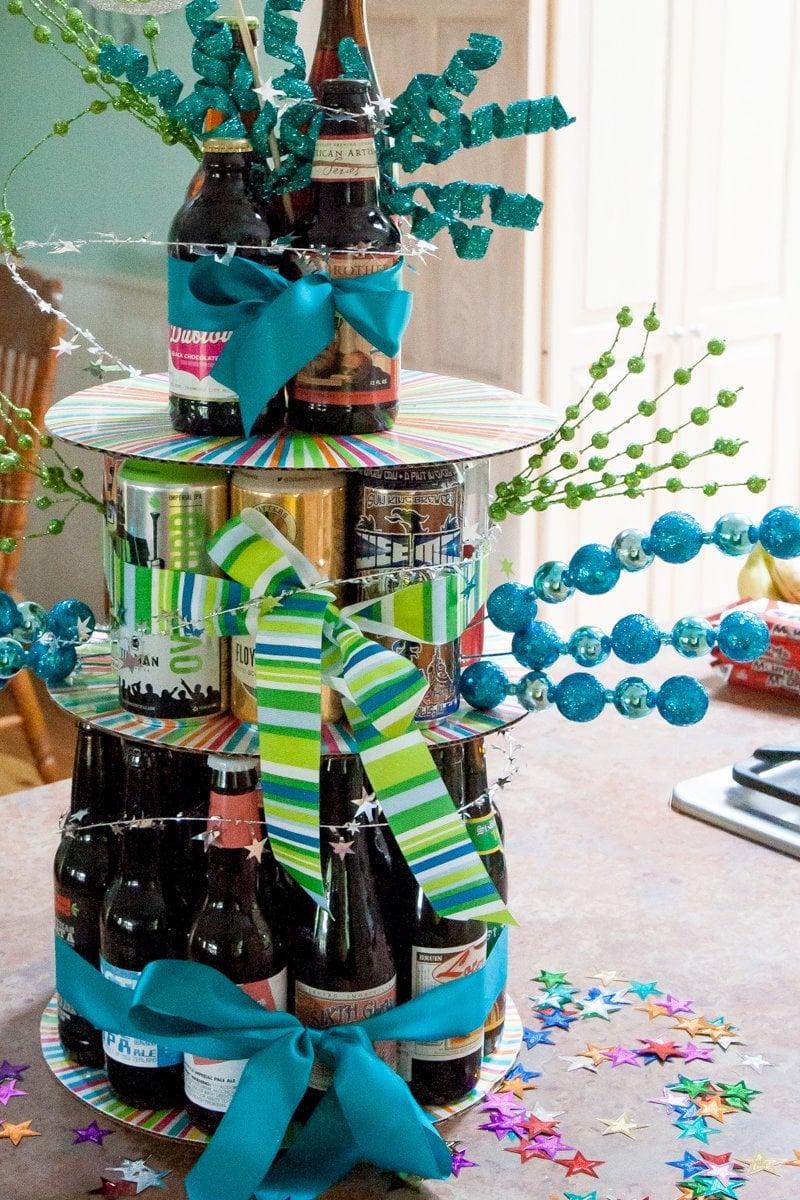 The first step was to do some beer shopping. We’re very lucky to have an awesome liquor store nearby that specializes in single-bottle sales of a huge variety of craft beers from around the world—narrowing it down to 30 was really hard! I also wanted to try and make sure to get bottles of even heights to keep the beer cake steady. I’m sure I looked like a total lunatic measuring beer bottles in the store. 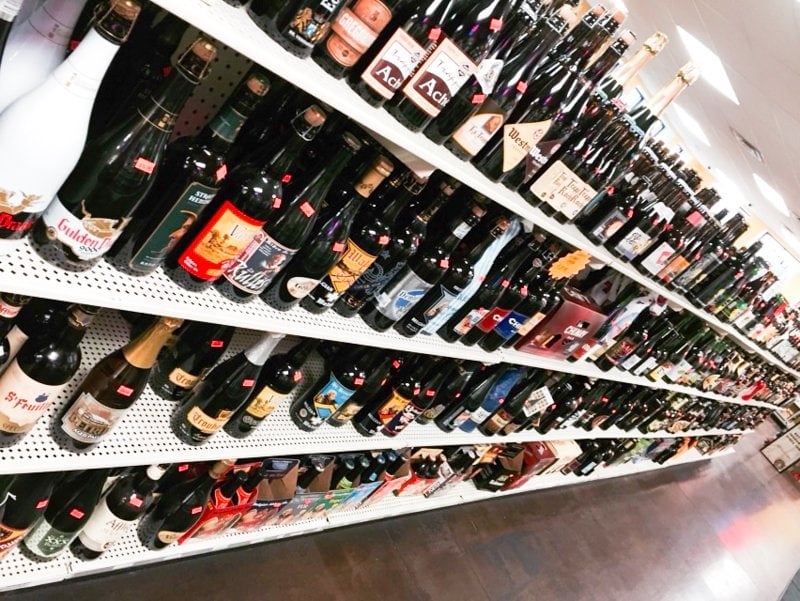 In the end, I decided to do three layers. The bottom layer was 16 bottles, the middle layer was 10 cans, and the top layer was four more bottles. There were quite a few brews I wanted to get that only came in cans, so instead of skipping them completely, I decided to devote a whole layer to canned beers. 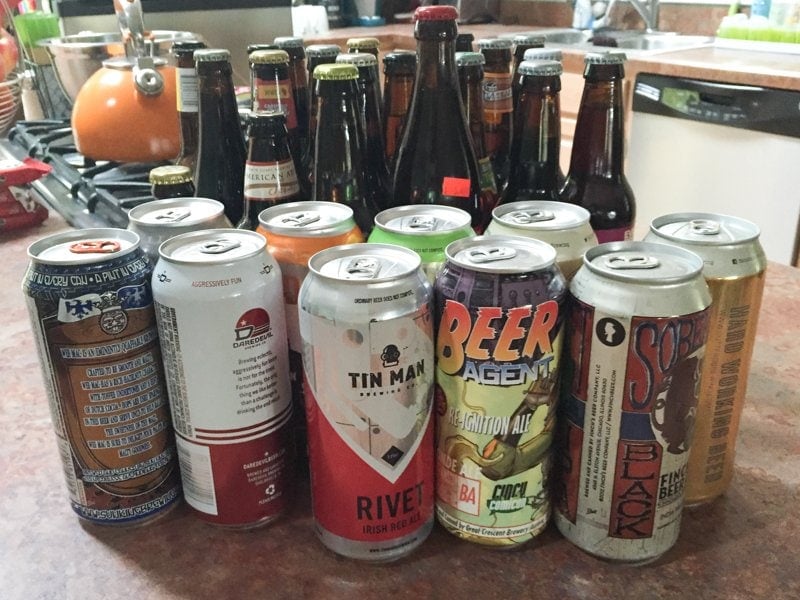 I also picked up 12″ cake boards from the craft store (to make the layers), plus ribbon, decorative floral picks, star garland, and glitter paper to make it all fun and festive.

First went down one of the cake boards. 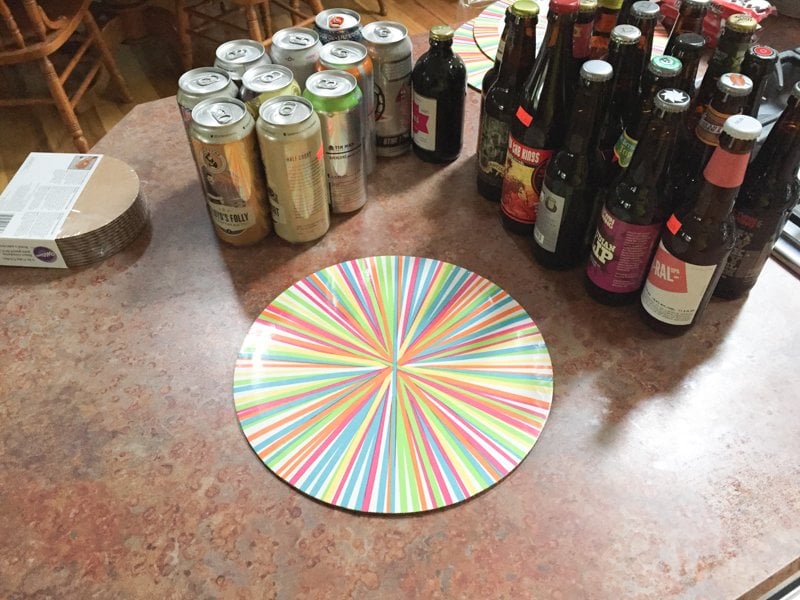 Then I arranged 16 beer all around the circle. 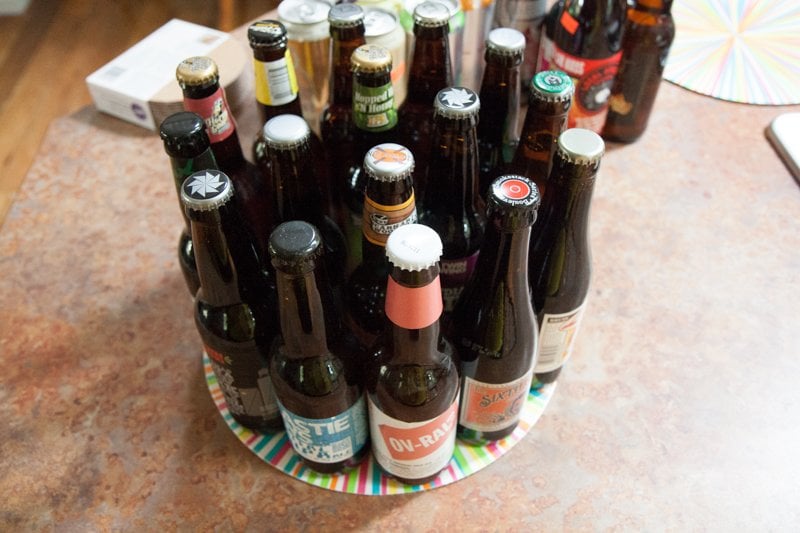 I wanted to make sure the cake had a nice sturdy base, and 16 seemed to do the trick. 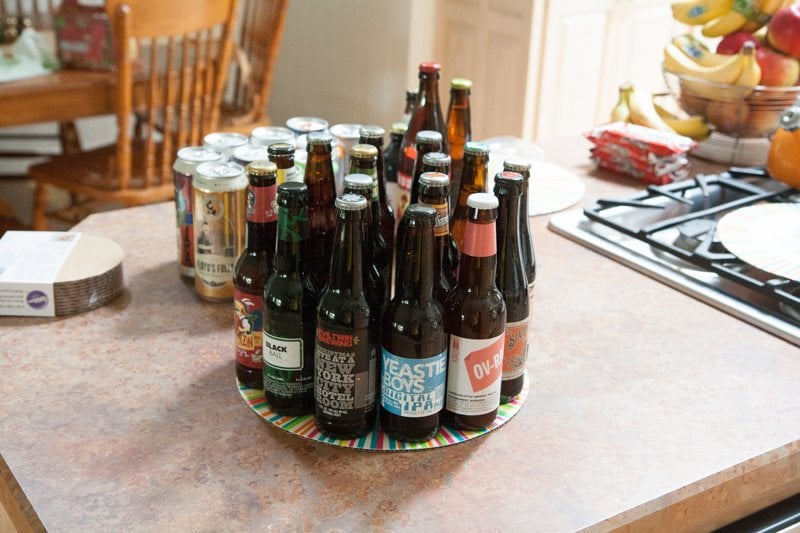 Next up went the second circle. 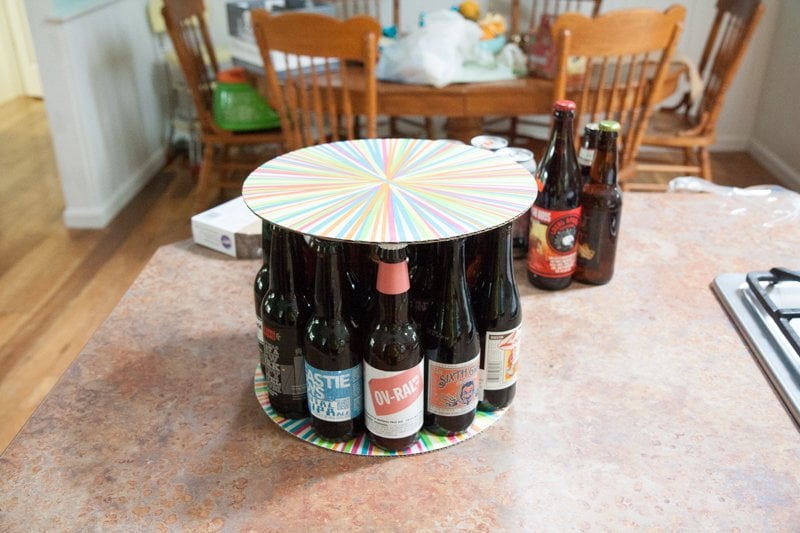 Followed by the canned beers. 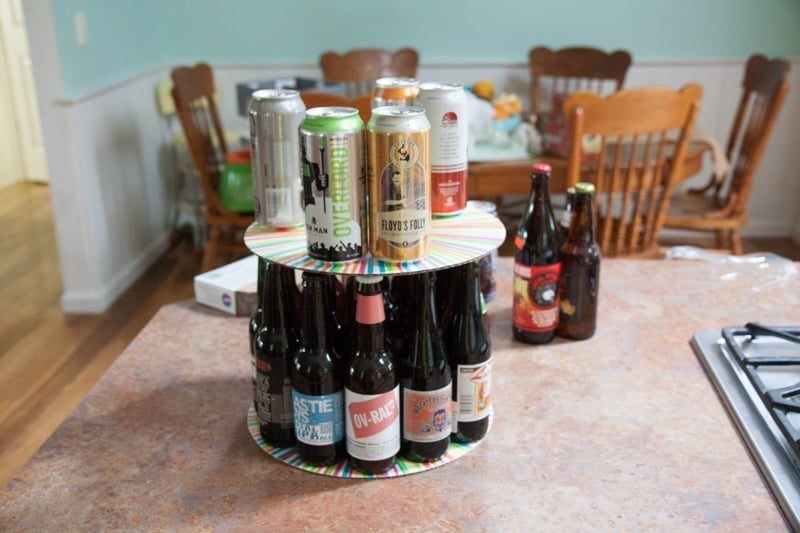 I used 10 canned beers, and it worked out, but I would have preferred one or two more on the layer for added stability. I’d say this cake would probably work the best with 33-35 beers.

Next up went the final cake board. 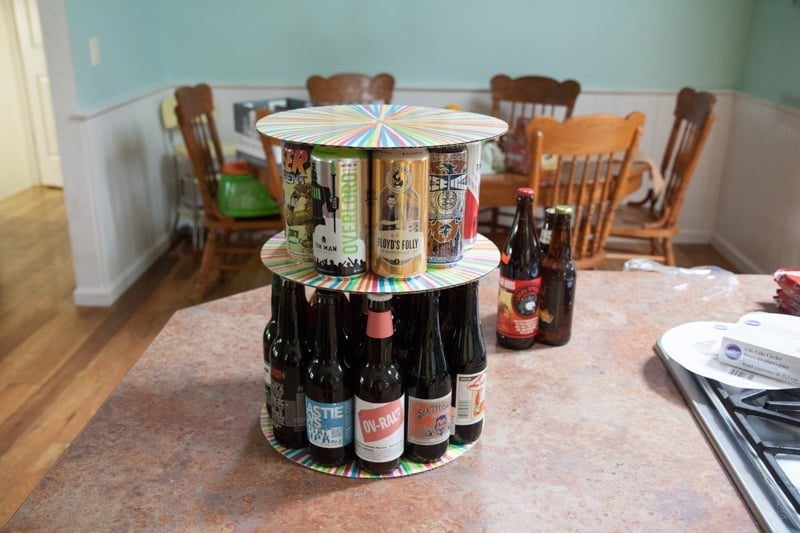 And then I topped it with four topper beers. These were the odd height beers I wanted to get him—they all went on top since there is nothing that needs to balance on them. 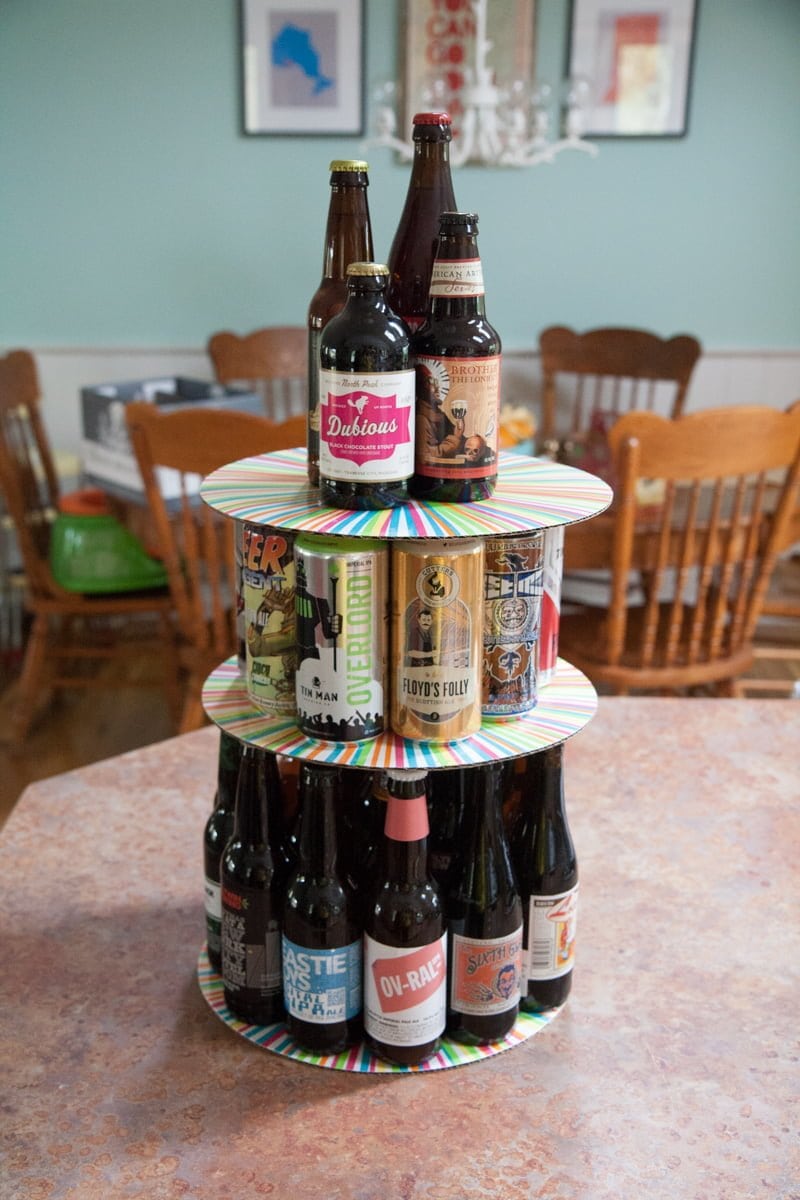 Then I wrapped each layer in ribbon, stuck in the decorative picks, and wrapped the whole thing in star garland.  I also cut “30” out of the glitter cardstock, attached it to a wooden skewer with tape, and stuck it in the top of the cake. 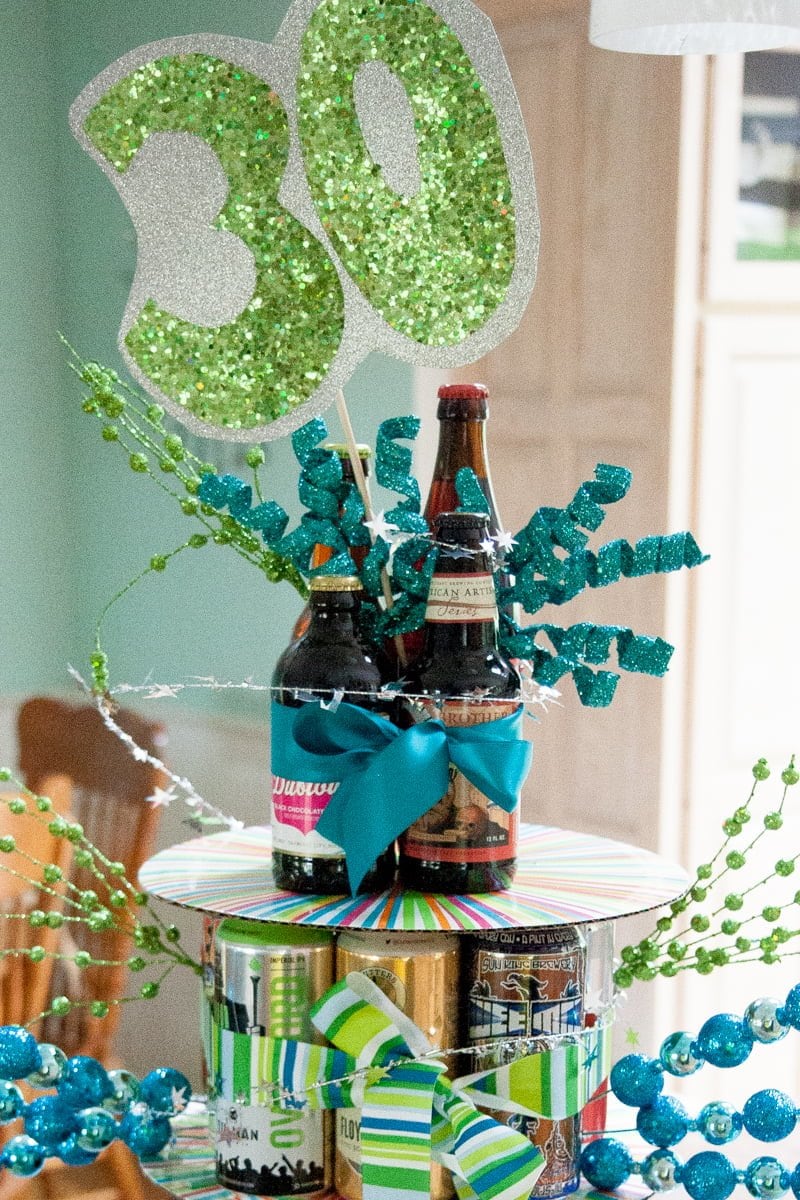 And then, just to be really nice and obnoxious, I spread confetti all around the cake (and promptly locked the cat in the basement—because I don’t even want to know what a cat does with a table full of confetti and a precarious stack of beer bottles). 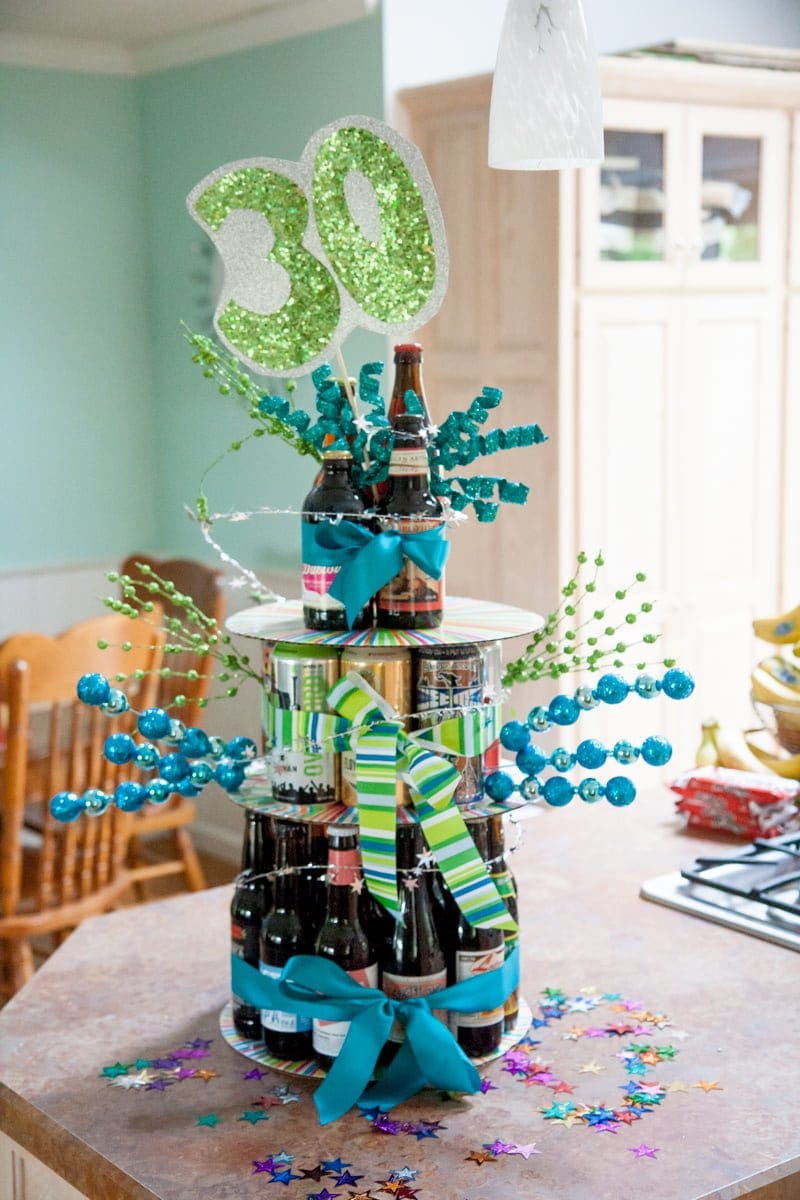 He was so excited about this! I’m sure he would have been just as excited if I plopped 30 beers in a box, but I think making them into a cake made his big, milestone birthday just a little bit more special. The most time-consuming part of the whole process was picking out the beers for him (which I loved doing, because I know I’ll be sipping on them, too). It was a great gift! He was so sad when we had to take it apart (see the previous cat comment), and he loved looking at all the different bottles so much, he didn’t want to put any of them in the fridge!