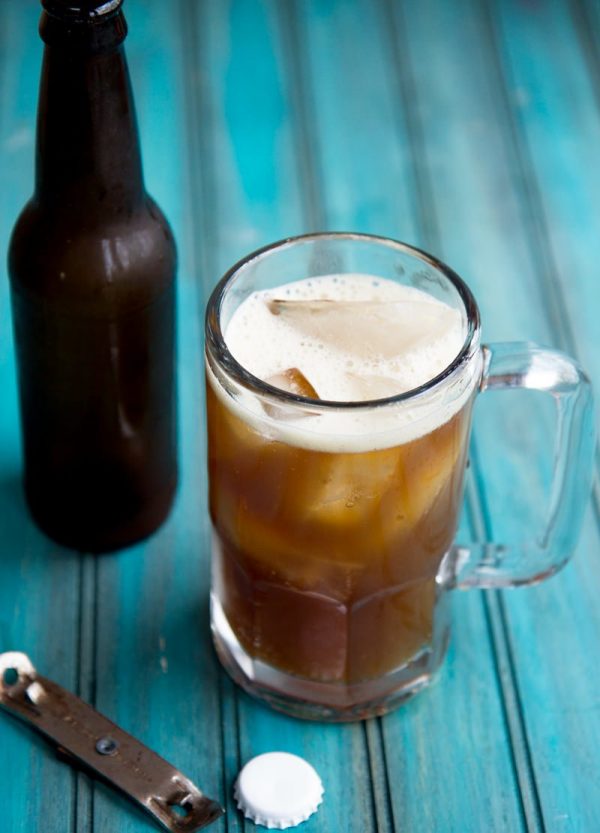 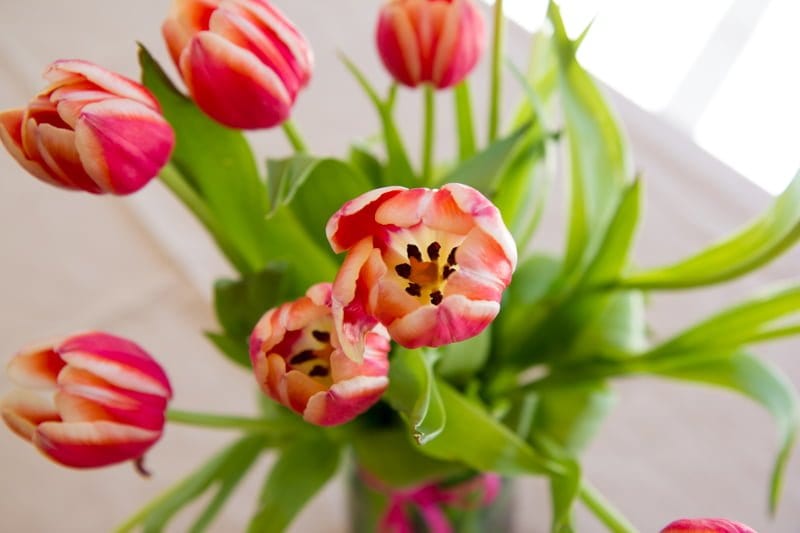 Not only is homemade root beer fun to make, but it’s also so much more flavorful than anything you can get at the store! Feel free to tweak this recipe to appeal to your tastes. We’re going to try a bit more cinnamon, vanilla, and orange zest next time.

We had an absolutely amazing time at our baby shower this past weekend. My Mama and sister really out-did themselves and managed to throw a party that was totally perfect for Craig and me! We’re not fussy baby shower type folks, so we requested early on that our shower be two things (a) a co-ed shower (Craig wanted to be part of the fun, too!) and (b) totally casual. 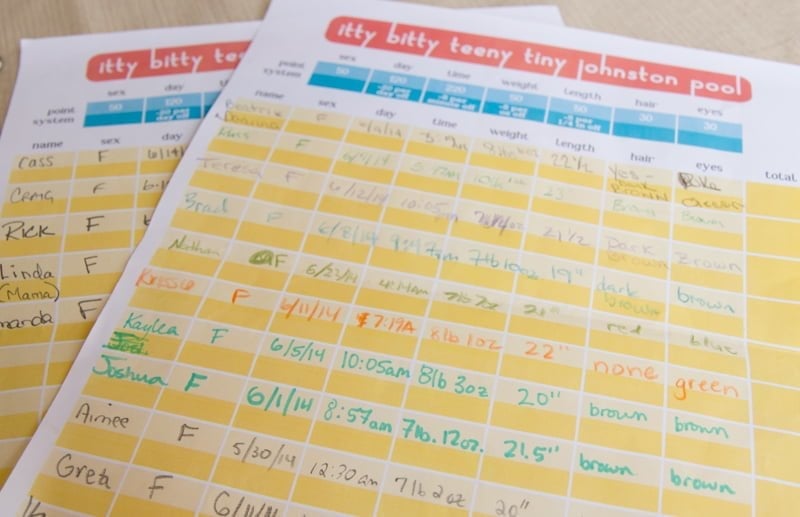 Honestly, we were mostly just looking forward to getting together with our friends and family one last time before Baby J shows up, and that’s what we wanted the day to focus on. And it did! We had beer (well, other people did), burgers, brats, and a ton of laughs. It was so amazing to see everyone. And everyone was so sweet and generous. We’re very spoiled! 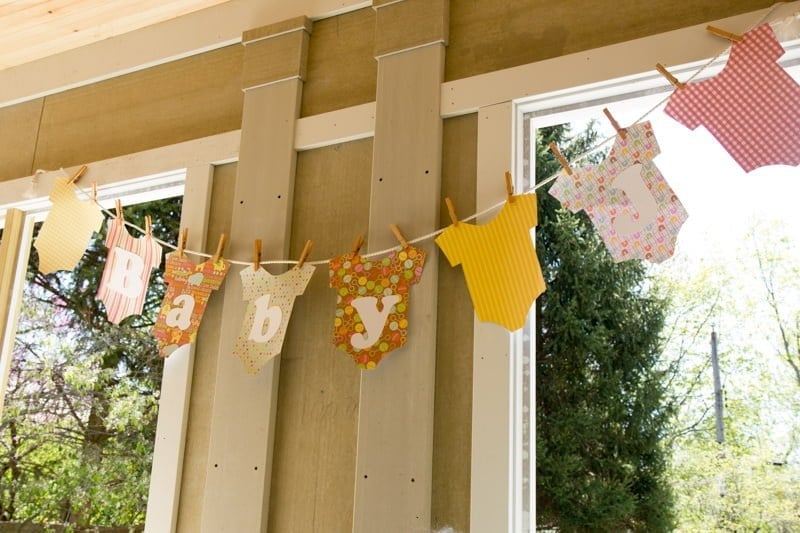 One of things I requested when we decided on a casual baby shower was root beer! Craig and my Dad have become master craft brewers over the past year, and packed up three of their homemade beers for party guests to enjoy (and everyone raved about them), but I didn’t want to be left out, so I requested that we try our hand at homebrewing some root beer, too. It took a few trials, but we managed to land on a crazy delicious homemade root beer that everyone seemed to enjoy! It was so good I almost didn’t miss the real beer. Almost. 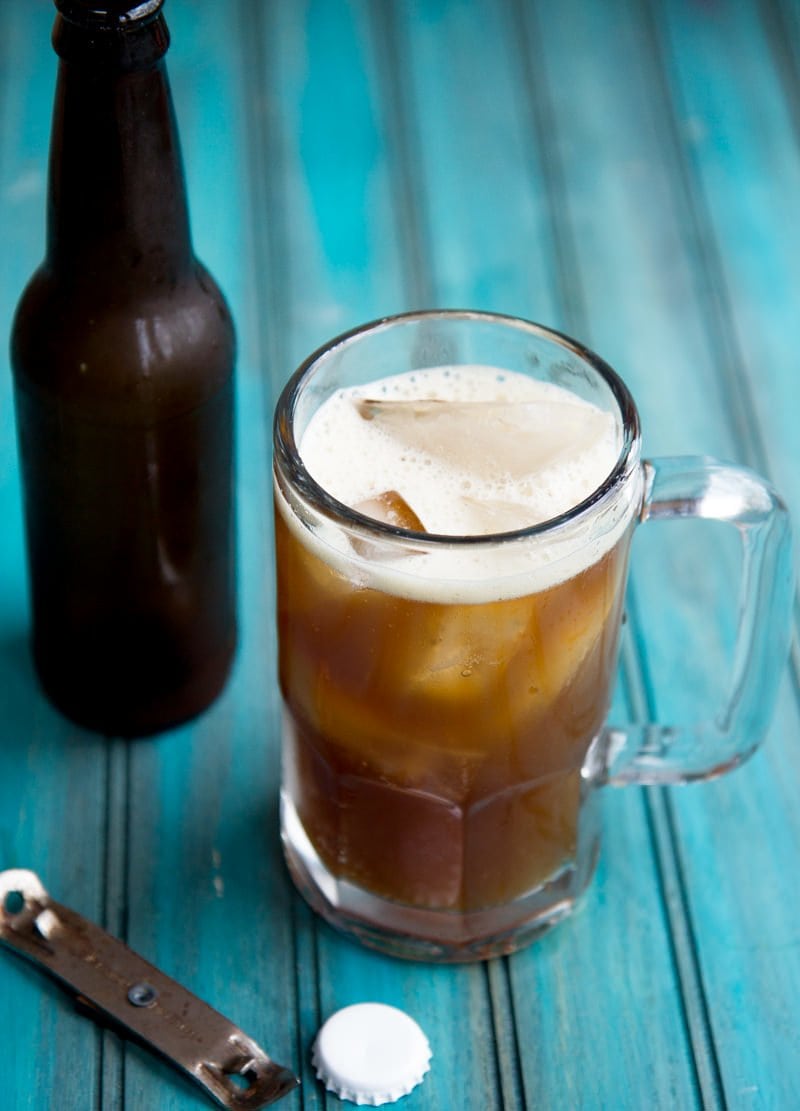 Brewing root beer at home seems complicated, but it was actually a pretty simple process. Basically, you just make a big batch of tea using roots and spices, add a sweetener and yeast, and then let it carbonate by sitting at room temperature for a few days. Admittedly, it helped that we have all the equipment from homebrewing beer, but that’s definitely not a necessity. 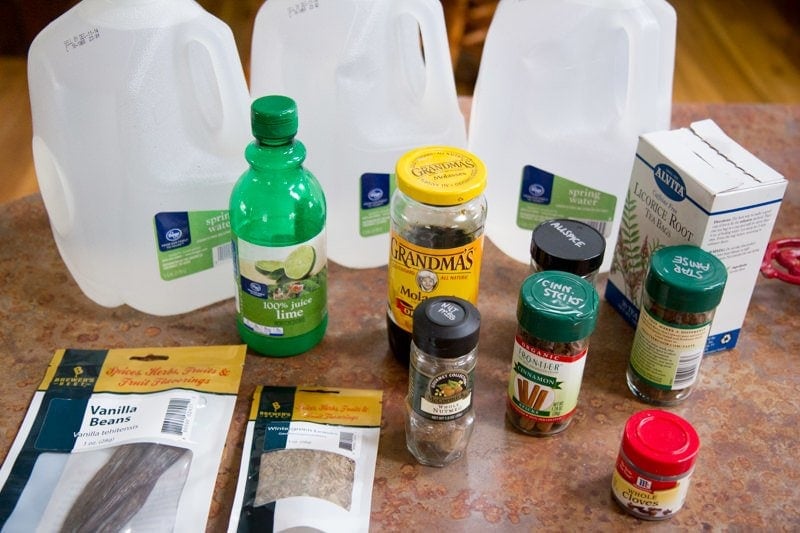 We loved being able to do this ourselves because we could control the amount and kind of sugar, and we could control the flavors and spices. In fact, we actually scrapped our first batch because it was too heavy on the licorice flavor. We landed on a pretty delicious final combination, but I can still see us tweaking it more in the future. I think I might add a bit more vanilla and a touch more cinnamon (to add some bite to it!) in our next batch. 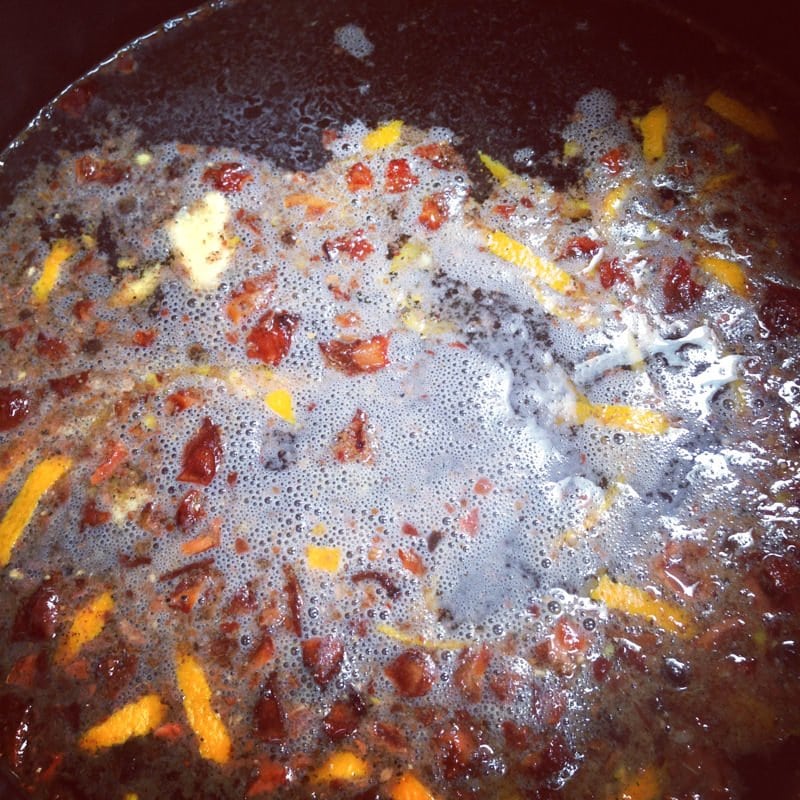 Traditional root beer is made using the root of the sassafras tree. But back in the 60s, the FDA banned sassafras root from commercially-made root beer because of a (what I think is flawed) study that found that ridiculously high amounts of a compound from sassafras injected in rats caused a higher risk of cancer (it was basically the equivalent of drinking 32-12 ounce root beers a day for an extended period of time). The irony is, the FDA never tested it on humans, and in fact, many independent studies show that regular, but moderate, consumption of sassafras in humans actually lowers cancer risk. Humans have been consuming sassafras root tea for centuries for its health benefits, even! But that’s up for you to decide on your own. 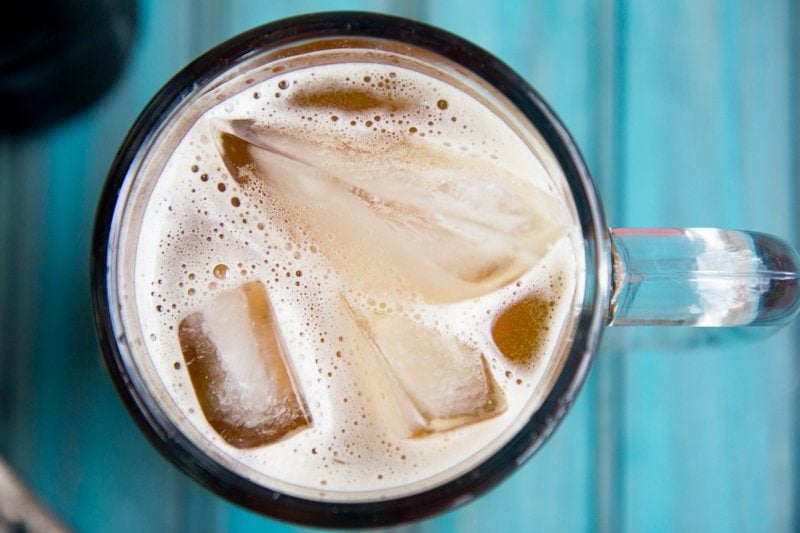 Anywho! You’d think after a rant like that, I’d go into saying that there is sassafras root in our root beer recipe, but there isn’t any. But it’s not because of the FDAs ruling, it’s because buying sassafras root is mega expensive! And while sassafras trees grow rampant in our area, it’s best to harvest sassafras for brewing in late summer or early fall—i.e. not now. Just like we learned with sugaring, when trees are budding and leafing out in spring, the sap becomes bitter. And no one wants bitter root beer!

We’ll probably tweak this recipe come summer or fall to include sassafras root from our property, but for now, we’re using an affordable mixture of spices and roots that approximate the flavor of sassafras. Bonus is, this recipe works for folks who don’t have sassafras trees growing rampant (I’m looking at you, West Coasters). And if the FDA ruling on sassafras worries you, you can make this recipe without concern. 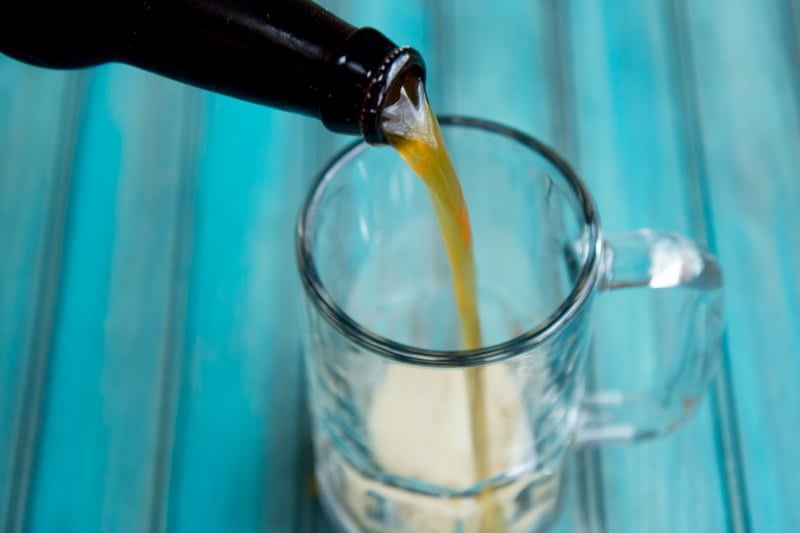 A note about bottling: because of the high levels of sugar in root beer, it carbonates really quickly! Many home root beer brewers actually recommend you store root beer in plastic bottles because glass ones have been known to explode from the rapid carbonation. Quite frankly, we don’t store any of our food in plastic, and we weren’t about to start with our homemade root beer, so we chanced it and bottled it in regular ole beer bottles with regular caps. To prevent a mess, while the bottles were carbonating, we wrapped each one in bubble wrap, and put them in a large cooler. That way, if one went off, it hopefully wouldn’t cause a chain reaction. And at the very least, it would keep the mess contained. But, thankfully, we didn’t have any issues. 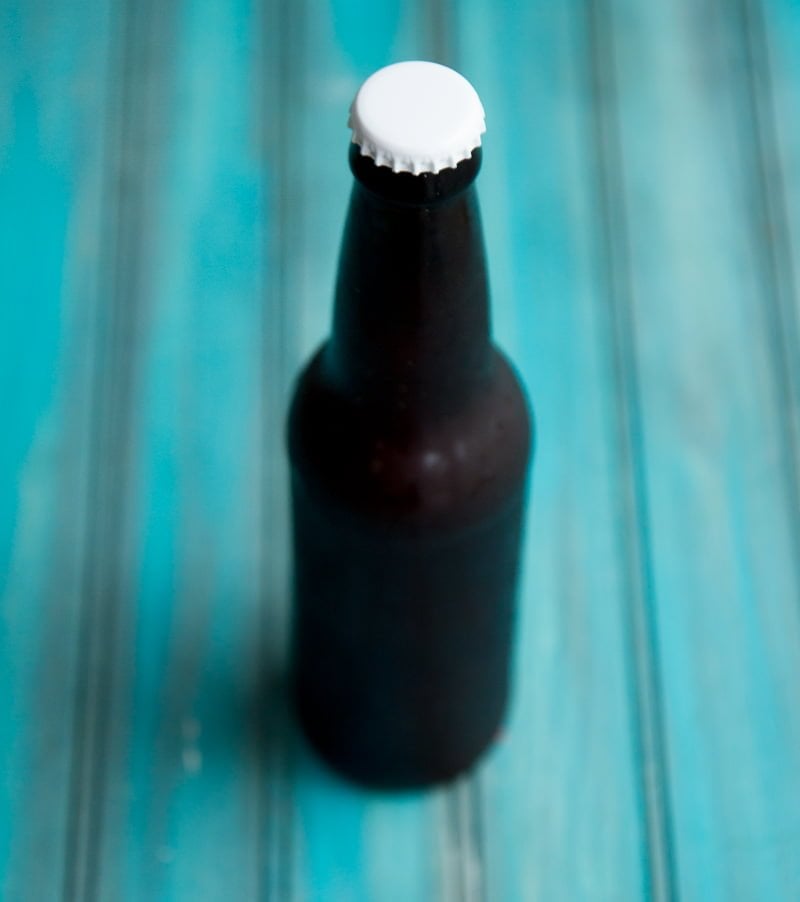 Some folks also use flip-top style bottles (they help release a touch of the pressure) or even canning jars with the lids not 100% tightened. We just liked living on the edge by using regular bottles. We also checked our bottles every 12 hours after brewing for carbonation. Once it hit the sweet spot (it took about 48 hours in our 70° house), we popped the bottles in the fridge to slow the carbonation process down and prevent them from getting overcarbonated.

Have you ever made your own homemade soft drinks?