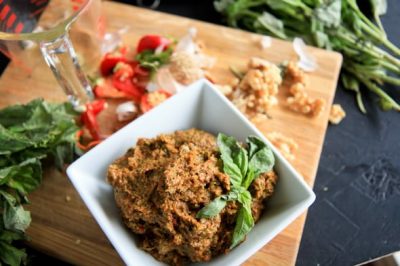 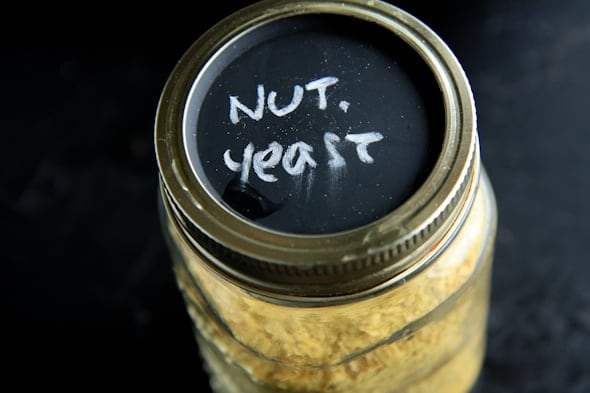 Or “Nut. Yeast” as Babyface so eloquently labeled the jar in our pantry.

I’ve seen nutritional yeast pop up on numerous vegan and vegetarian blogs for years and scoffed at the stuff. It felt like a ridiculous ingredient. Obscure. Weird. And seriously, who needs things to taste “cheezy” when you can use actual, honest-to-goodness cheese?

Plus, the stuff looks like fish food. And fish food is not good eats. 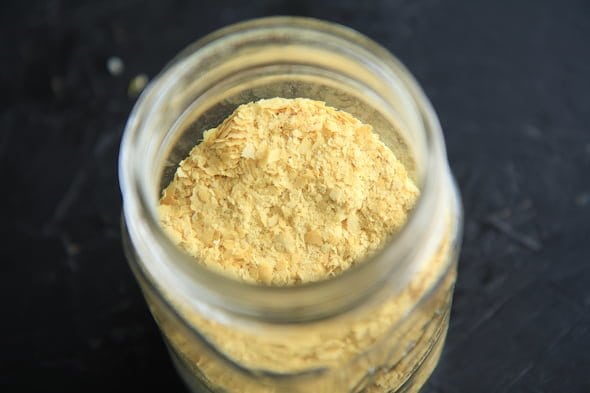 And then, just like my sudden desire to wear leggings as pants after years of mocking the trend, I came around. The elimination diet was in full swing. I needed something cheesy. And well, “cheezy” would just have to do.

The best way I can describe the flavor of nutritional yeast is like buttered popcorn. The texture is flakey and fragile. Which makes it a great candidate for adding to recipes where the flavor needs to stand out, but the texture shouldn’t. For example, we’ve been making vegan, gluten-free garlic “cheeze” bread by spreading soy-free vegan margarine on gluten-free bread and the sprinkling on some garlic powder and nutritional yeast. It tastes buttery and cheezy, but the texture is just like buttered toast.

As much as I’ve learned to like nutritional yeast, I don’t plan on making it a staple of our diet or of the recipes you see here. Even though I’ve learned to love it, I still think it is a weird and obscure ingredient (although, admittedly, it was not at all hard to find in my town). If you are feeling adventurous or curious, go ahead and grab some from your closest bulk bin. If you aren’t? Just sub in equal amounts of Parmesan cheese in this pesto and you’ll never have to venture into the world of “cheezy” fish food. 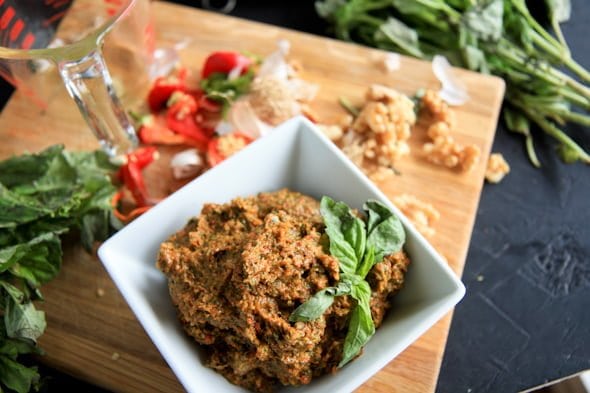 I was really hoping this pesto would look prettier. Bright red. Vibrant. But alas, green basil + red peppers = brown. You’d think I’d know that was going to be the result considering I have a fine arts degree, but I chose to ignore the expertise my expensive education gave me.  I promise it tastes incredible! I’ve been slathering this stuff on and in everything that goes into my mouth. It is so full of flavor and is a great way to use up the last few bunches of basil from the farmer’s market. And it works incredibly well with some chickpea flaxseed pasta, if you were so inclined. 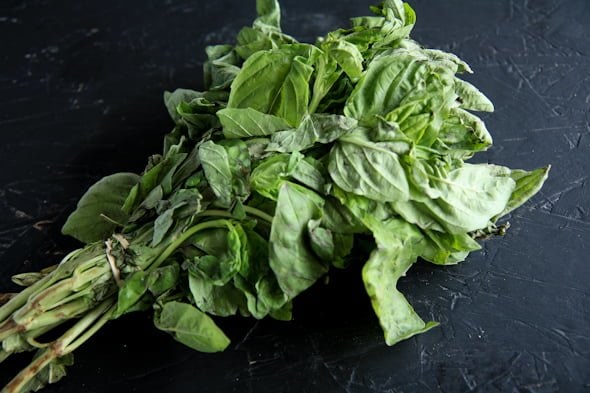 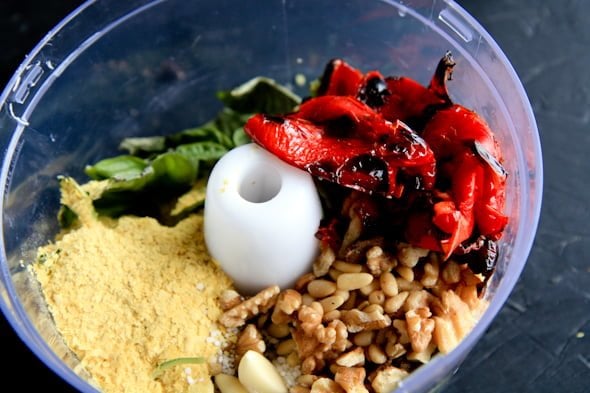 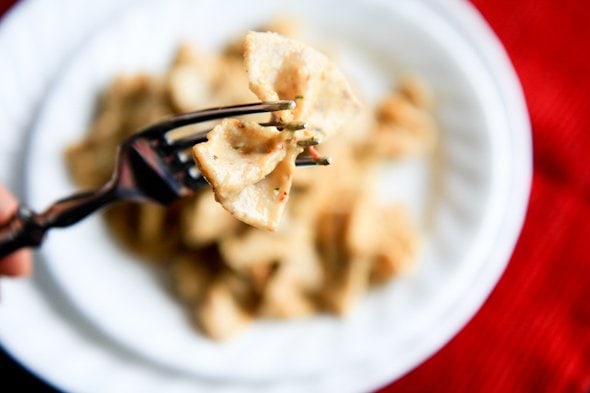 There are a million guides out there for how to roast red peppers. My favorite method is sticking them under a blistering (literally) hot broiler until the skin is charred and the meat of the peppers is soft. I know, I know, you are supposed to painstakingly peel every little bit of skin off the pepper once they cool, but I’m really impatient. I peel off the big chunks and leave the rest. If someone is looking over your shoulder and judging your method, just do what I do and tell them that you leave it in because it gives a smoky note to the otherwise brightly flavored pesto.

Or something else pretentious sounding. 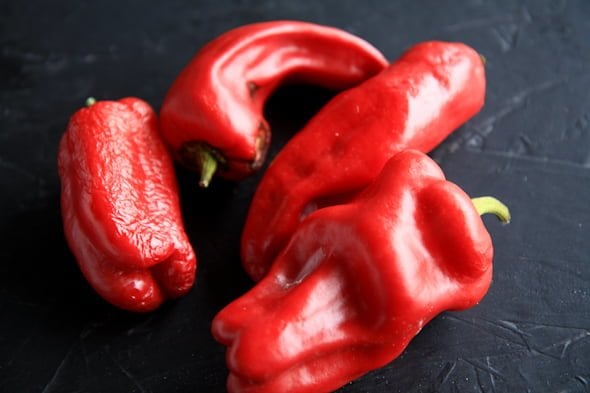 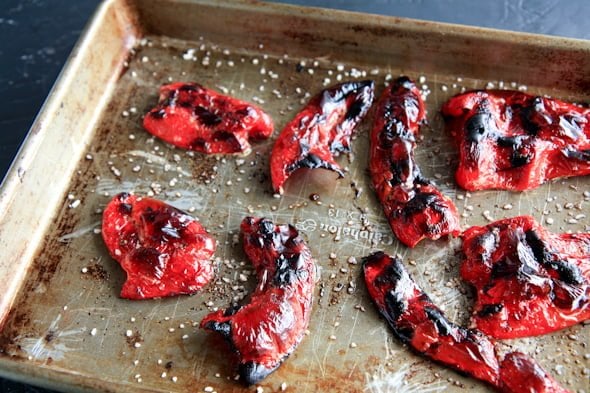 If you aren’t a fan of tracking down nutritional yeast and don’t care about the vegan-ness, go ahead and sub in Parmesan cheese in the same amount. Toss a few tablespoons of this pesto with your favorite pasta and you have a quick and delicious dinner.

Makes about 1 cup of pesto 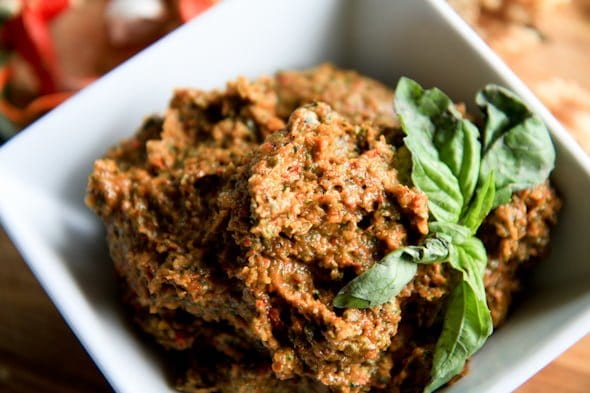 Do you like trying obscure ingredients? Or are you a fan of pantry staples?