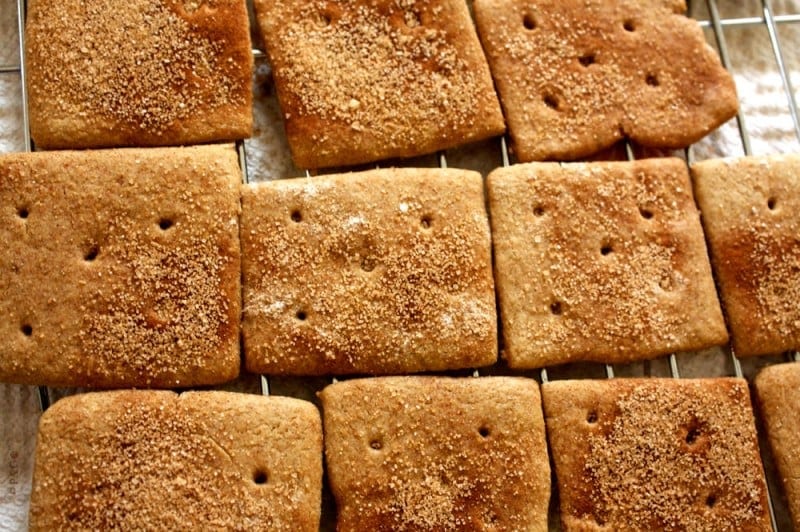 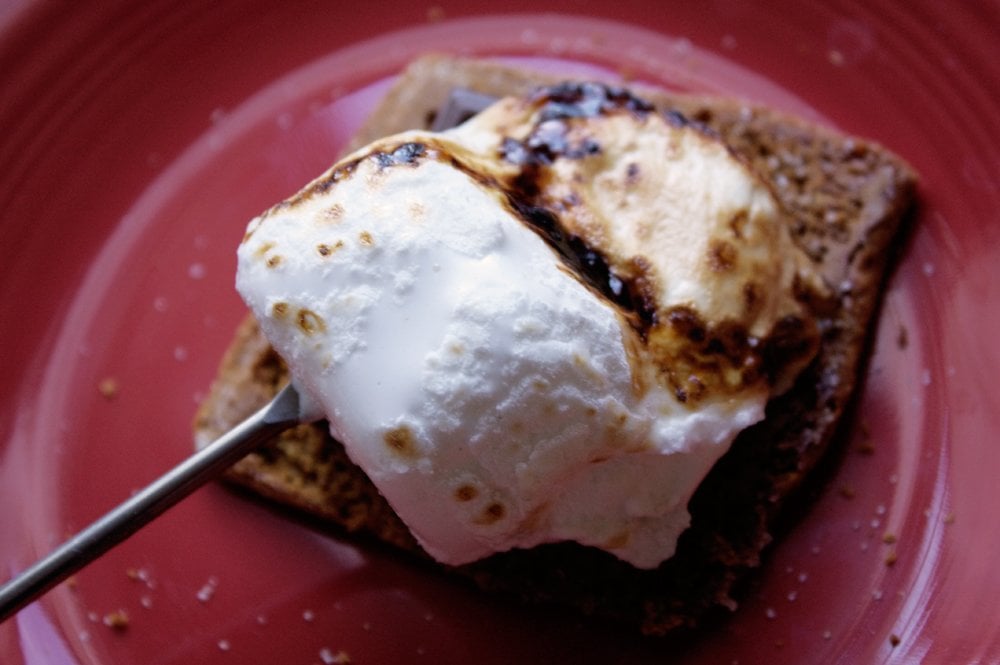 Onto the second part of my talks about the perfect s’more. If you missed the first part of the series, you can check out how to make corn-syrup free marshmallows here. Today, let’s talk about the graham cracker. 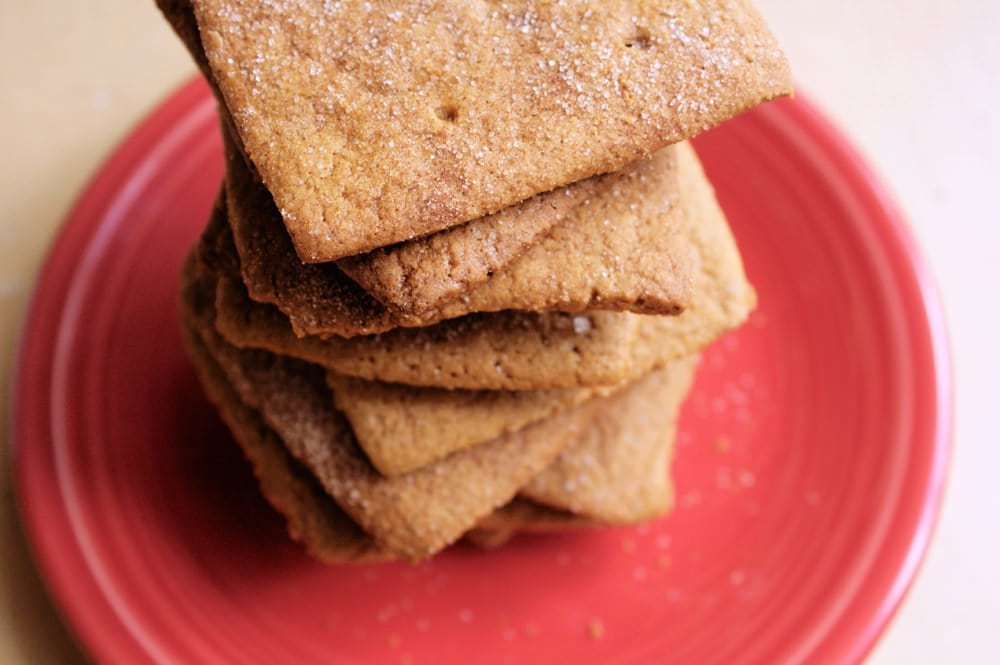 Just like we did with mallows, let’s talk about the problems with store-bought grahams:

Graham crackers are a little time consuming to make, but the results are definitely worth it. And the possibilities are nearly endless. Let’s get to crackerin’. 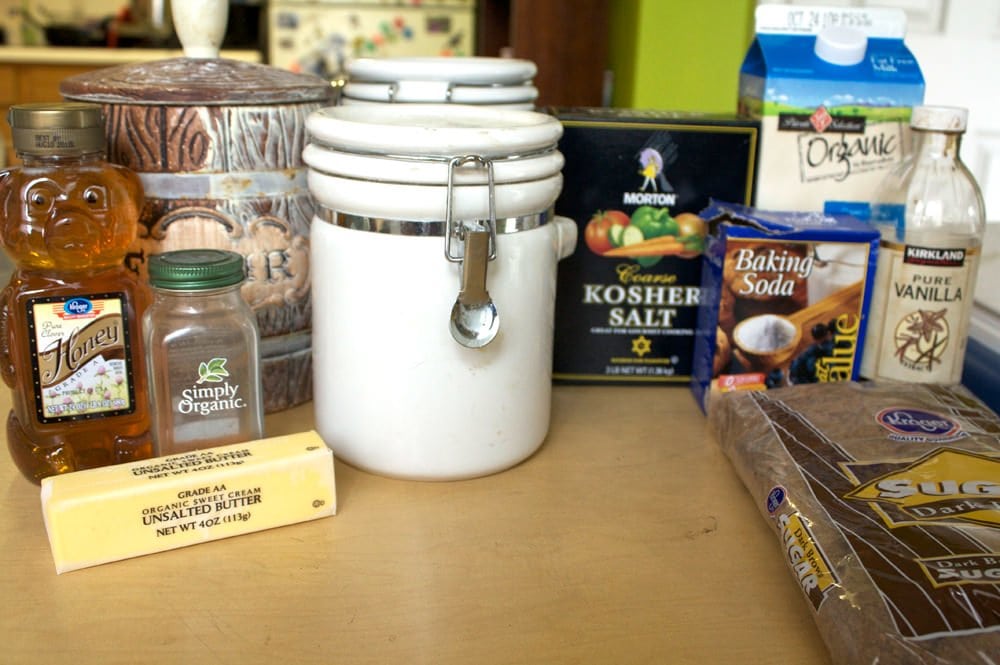 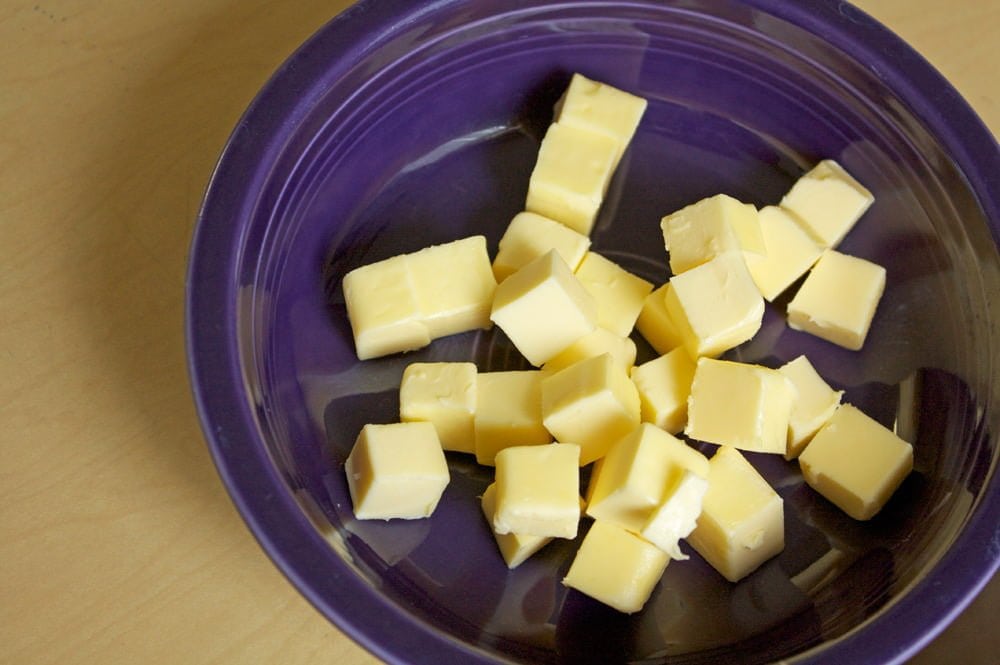 First, chop up the butter into cubes and plop it into the freezer. 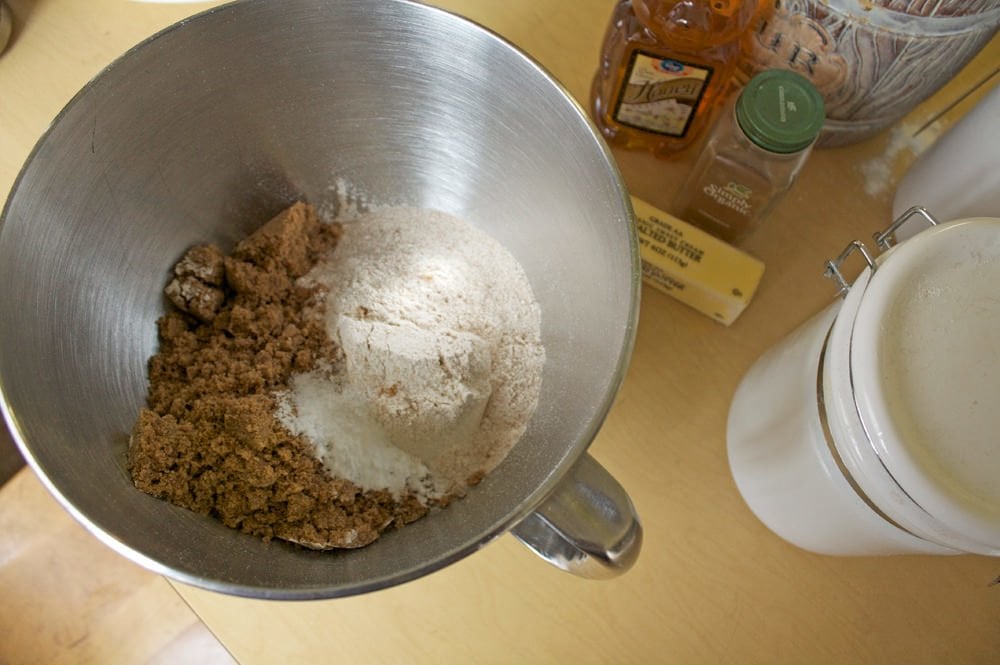 While the butter is getting chilly, dry ingredients into the bowl of your mixer. On the mixer goes your paddle attachment. Or if you are fortunate enough to own one of these awesome tools, use it instead. Mix dry ingredients on low until just incorporated. 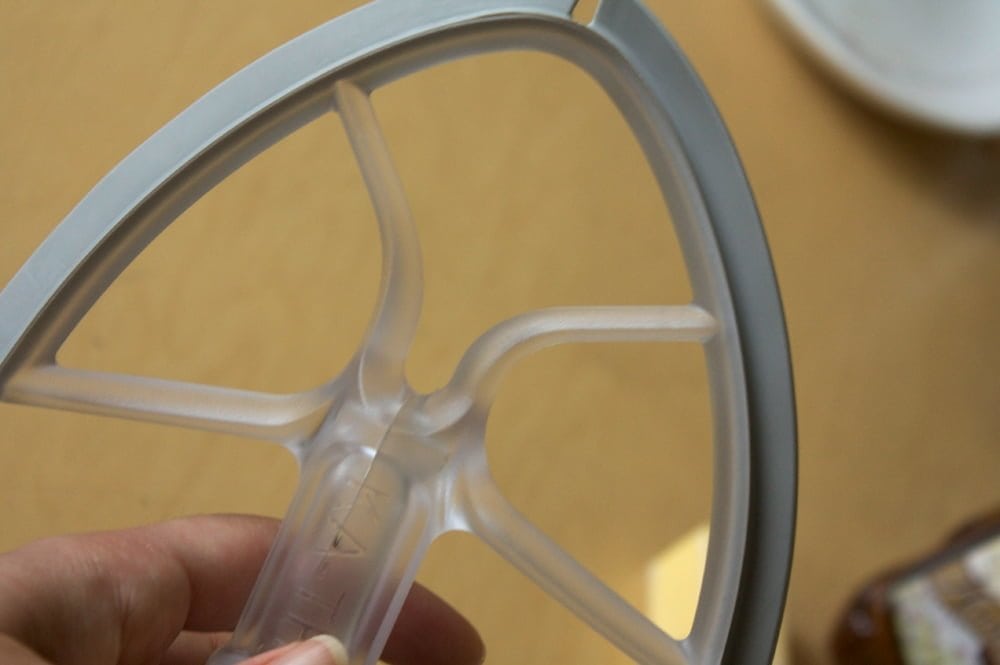 Let’s go ahead and mix up the wet ingredients so everything is ready to go. Honey, milk and vanilla. 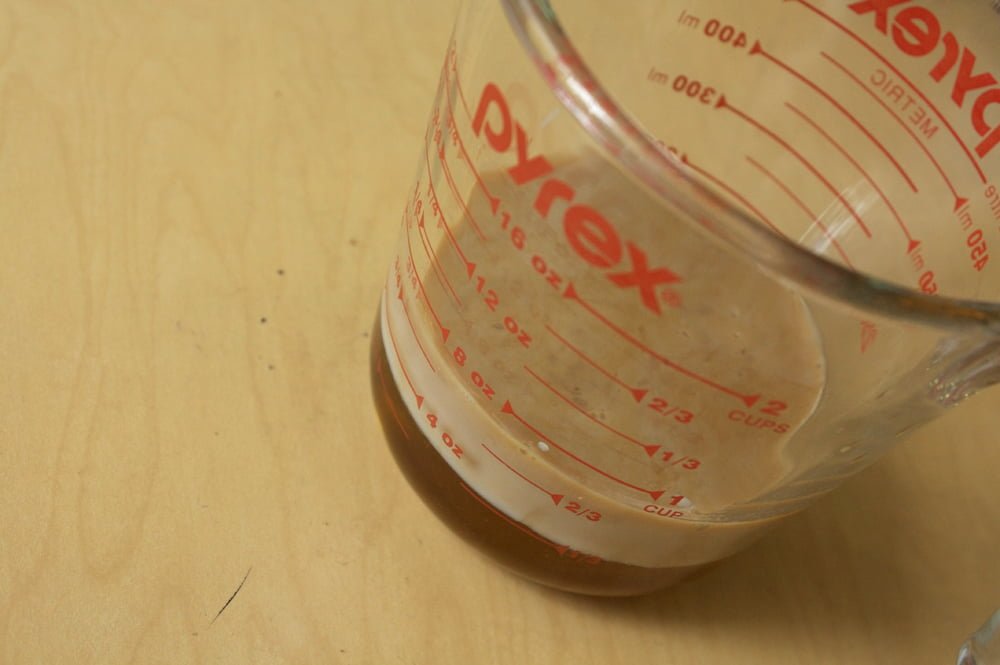 And yes, you read the recipe right, that is 2 WHOLE tablespoons of vanilla. Go ahead, do it. 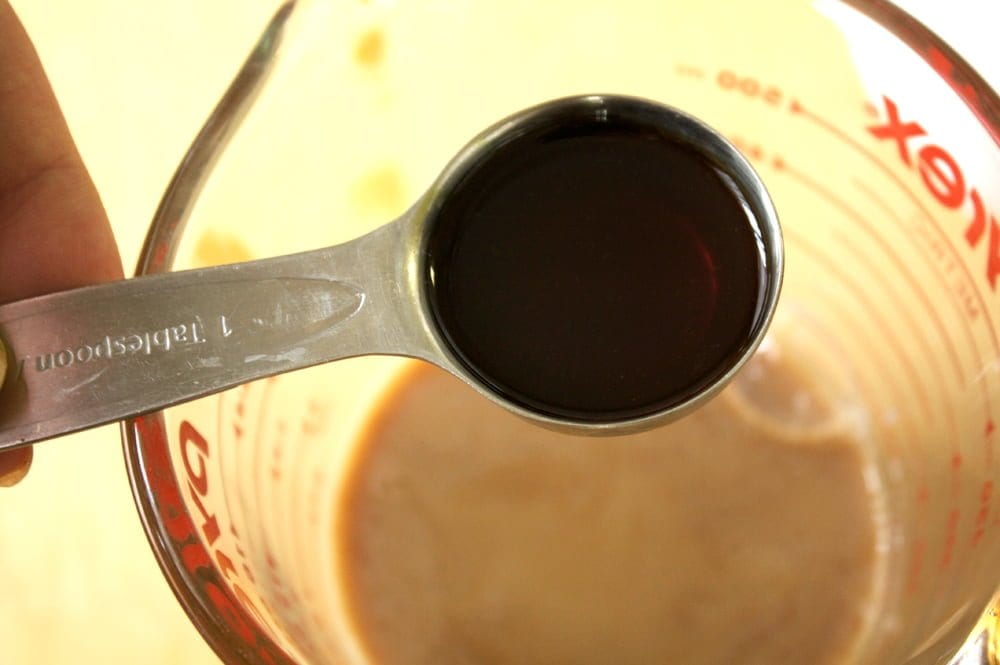 Now, let’s put all the parts together. Into the mixer goes the frozen butter. 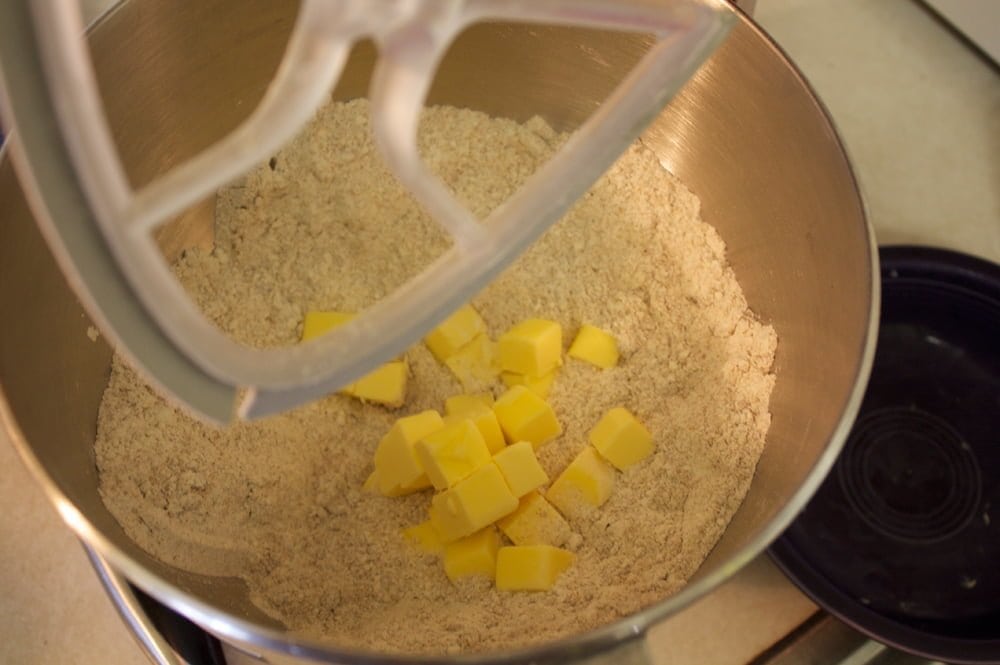 Turn the mixer on low and let it cut in the butter until it looks like a coarse meal. Like this: 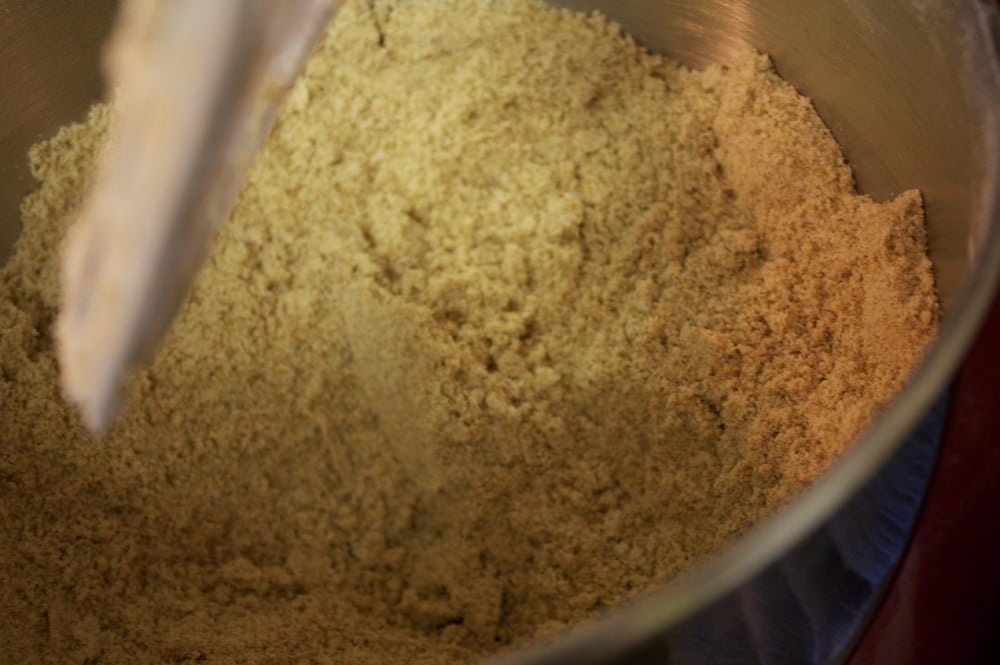 Next up, stream in the wet ingredients while mixer is on low. Flour on my mixer adds character. 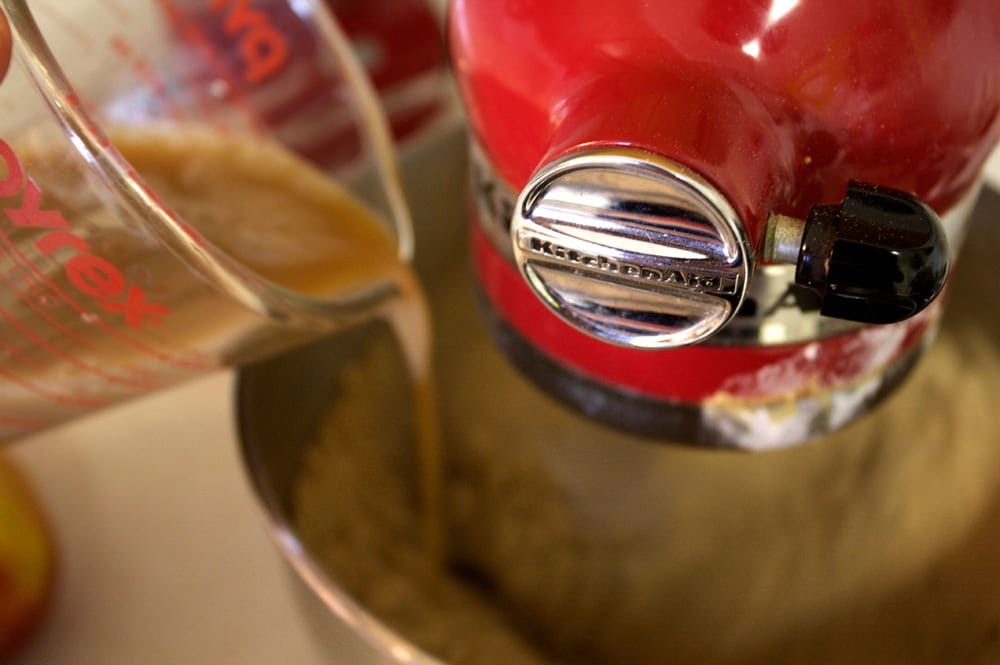 The dough will come together pretty quickly, and will be sticky.

Divide into two disc, wrap in plastic wrap and place in the fridge for an hour or, if you are particularly impatient like me, throw in the freezer for 15 minutes. 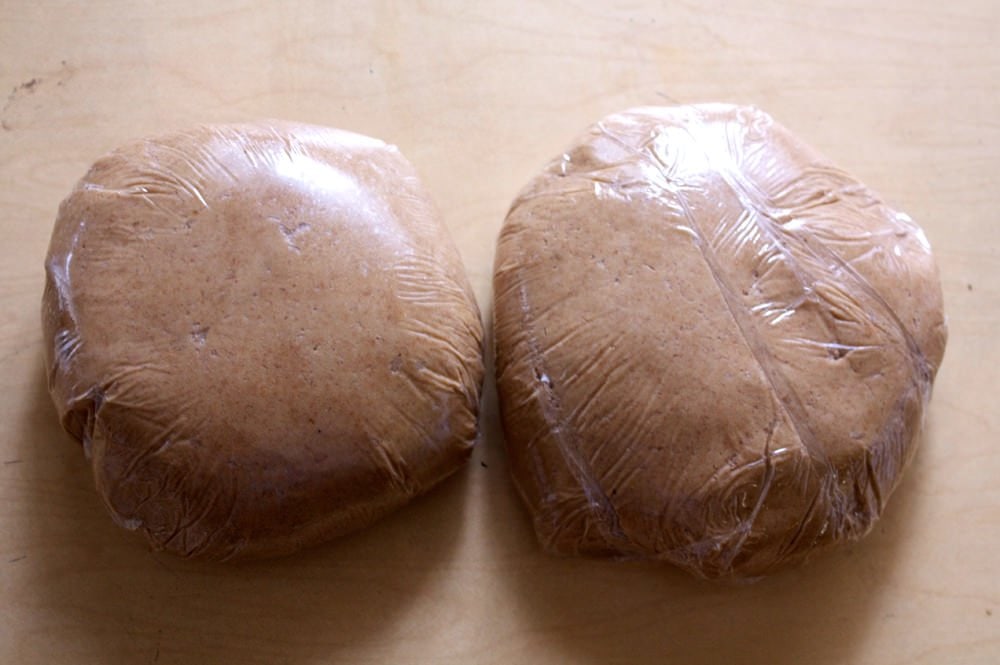 While your dough is chillin’, let’s mix together a little topping. Cinnamon and sugar, for the win! 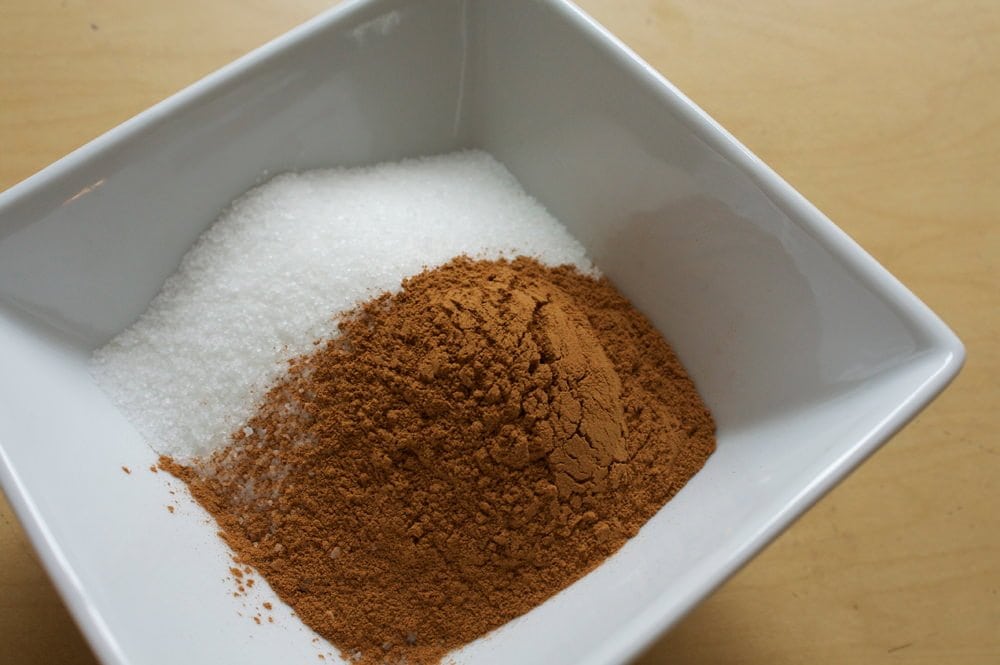 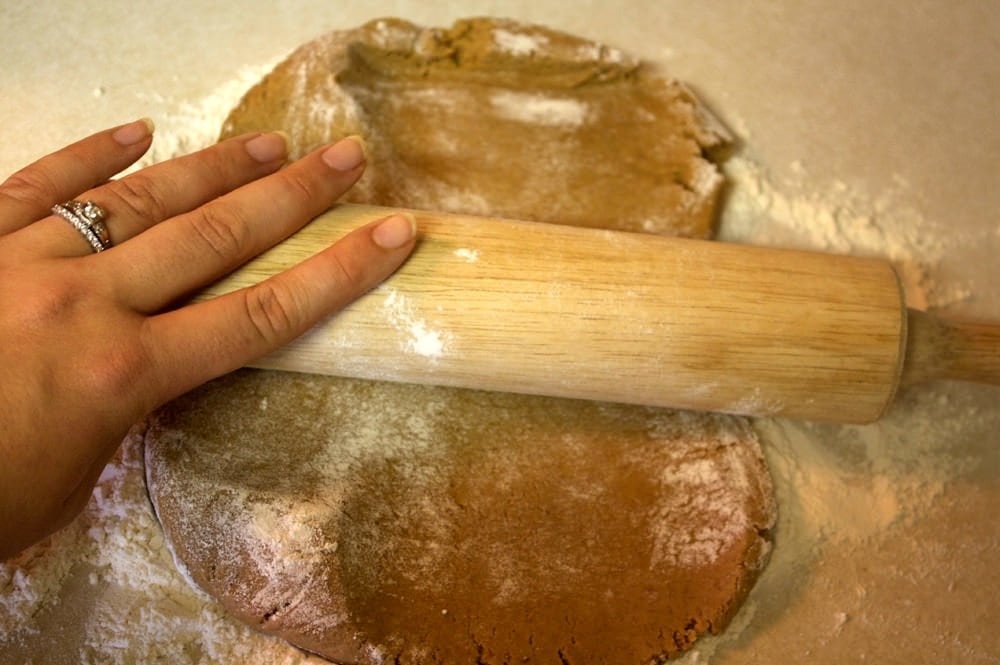 Don’t be shy with the flour here, this is a pretty sticky dough.

Now here is where you can go a few different directions. Want classic square graham crackers? Use a pizza cutter (*ahem* a pastry cutter) and cut them into even squares. 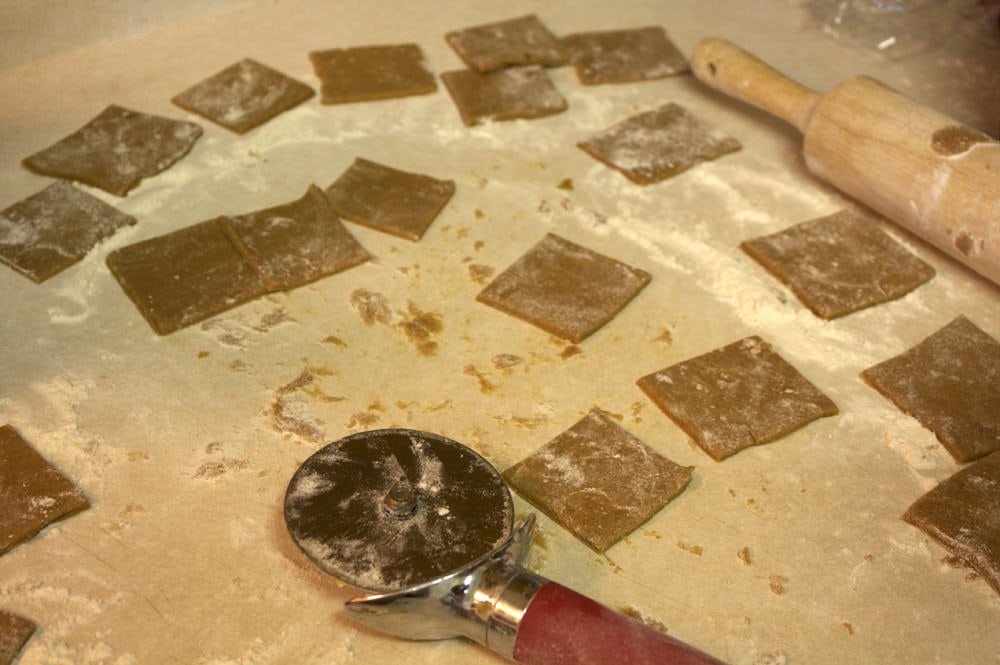 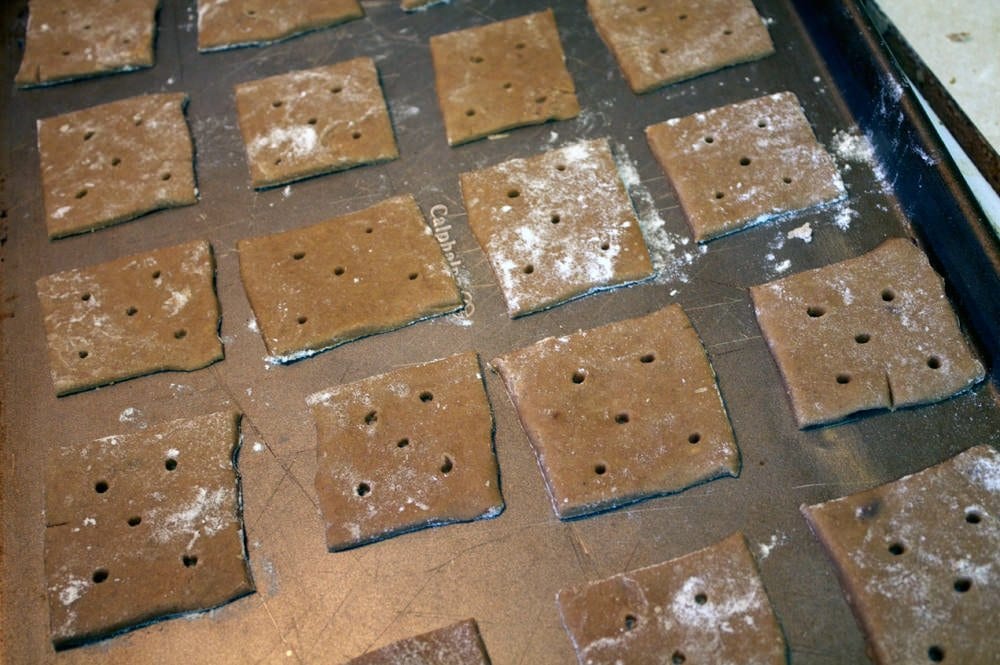 Those are what we use for s’mores.

The Husband also requested a few crackers for snacking during our road trip. Any excuse to use my cookie cutters. 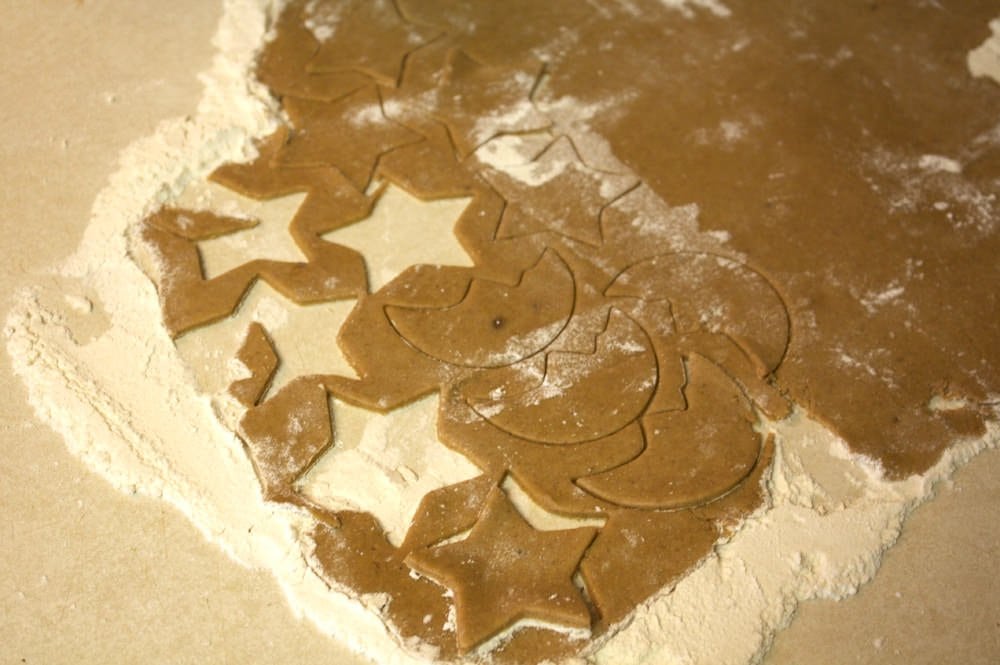 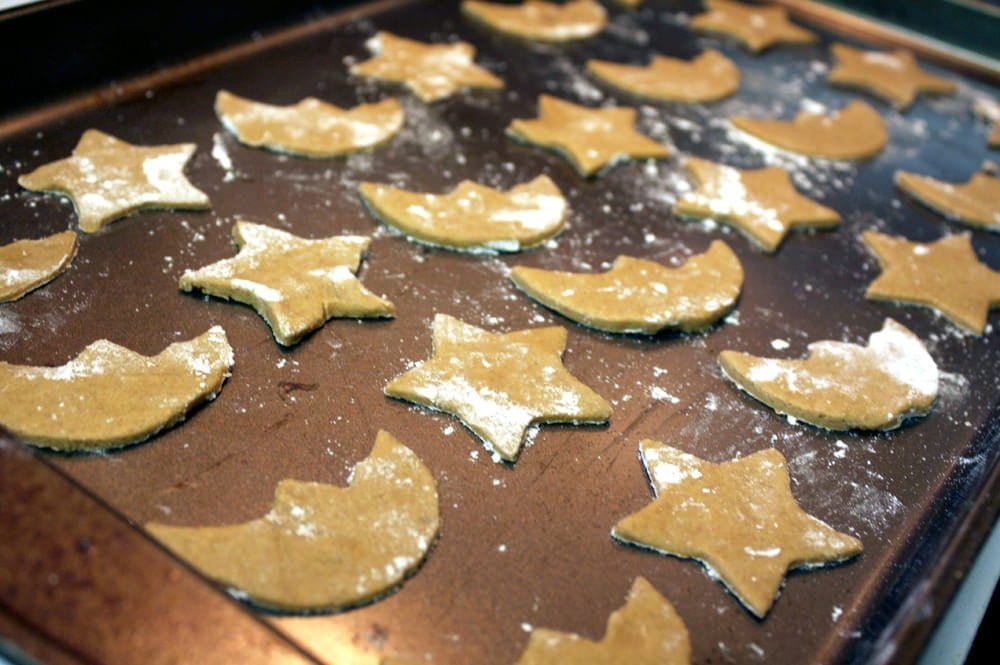 And I decided I wanted some little ones similar to Annie’s Bunnies. Let’s call these Cassie’s Squares. 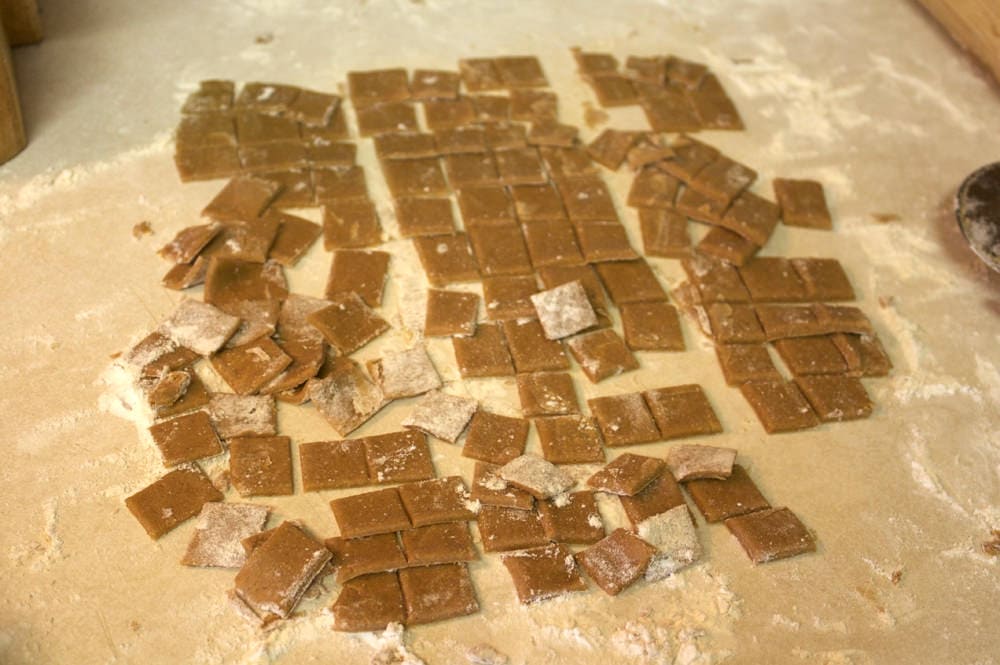 Before baking, slather those babies in the cinnamon sugar mixture. 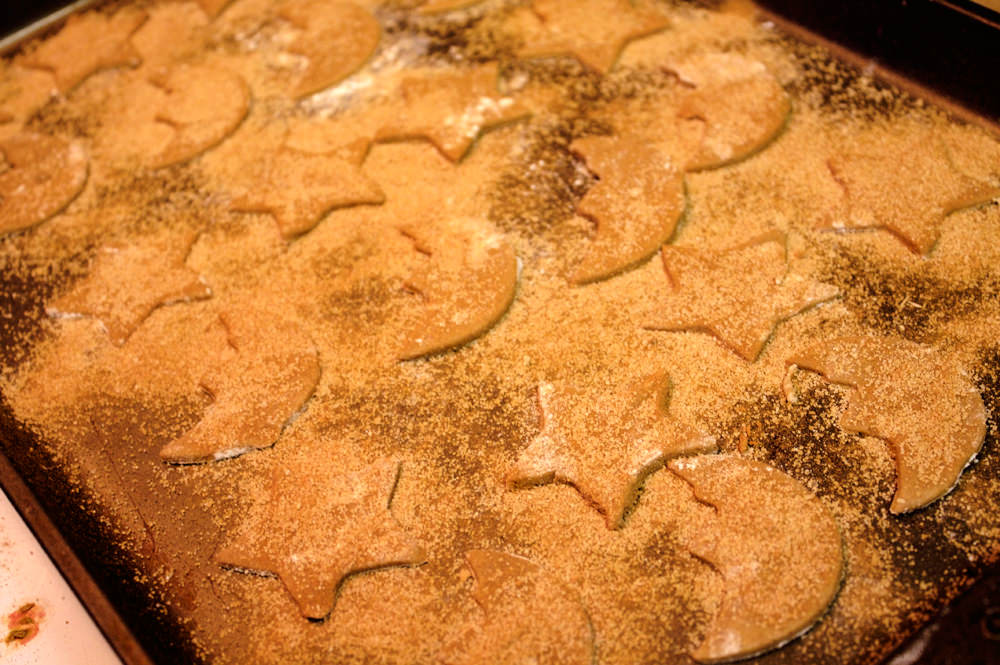 Now baking time greatly varies depending on what size and shape of cracker you are making. For the square, s’more sized ones, I baked at 350° for 12 minutes, for a nice chewy cookie. For the moons and stars, I baked them at the same temperature for 15 minutes for a very crispy cracker. For the little squares, same temperature, for 10 minutes and they came out crunchy (just like Annie’s bunnies). Keep a close eye on these! If you want a chewy cracker, remove them as soon as the middles of set firm. If you want something crispier, keep in the oven until they are golden brown. 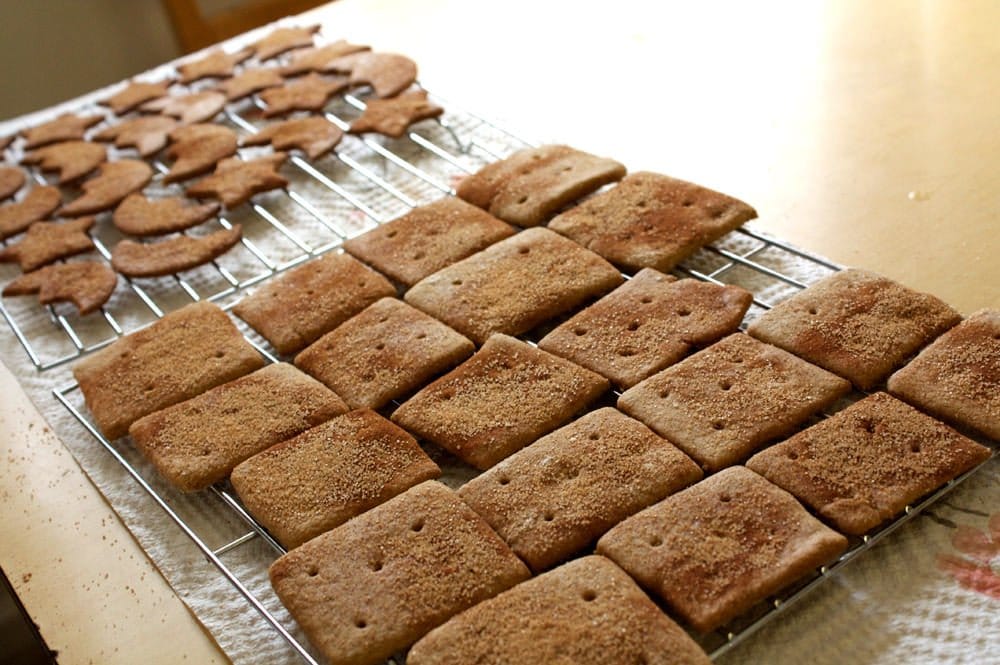 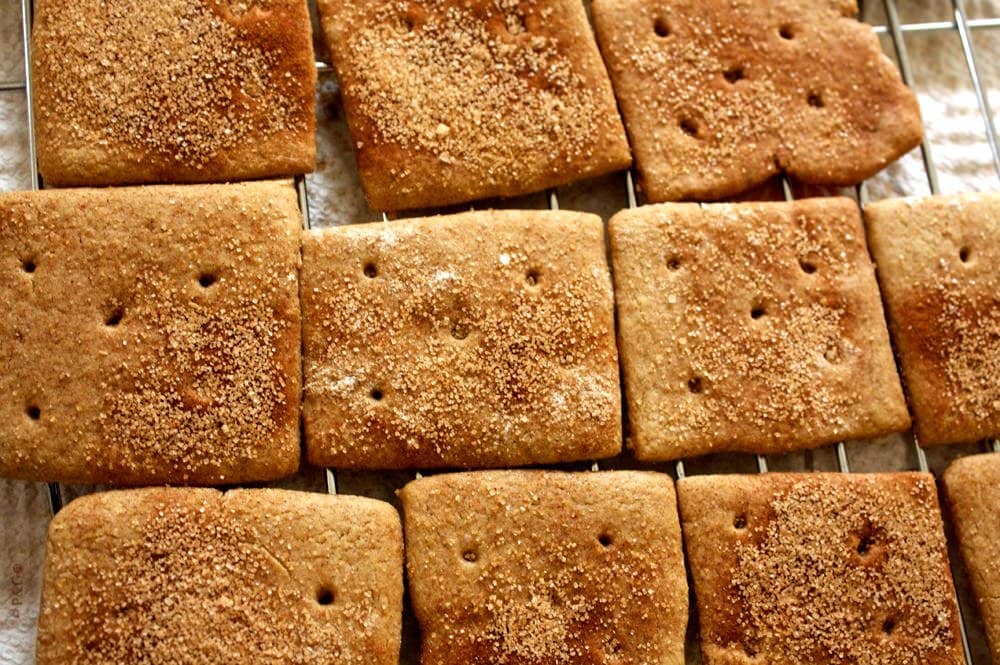 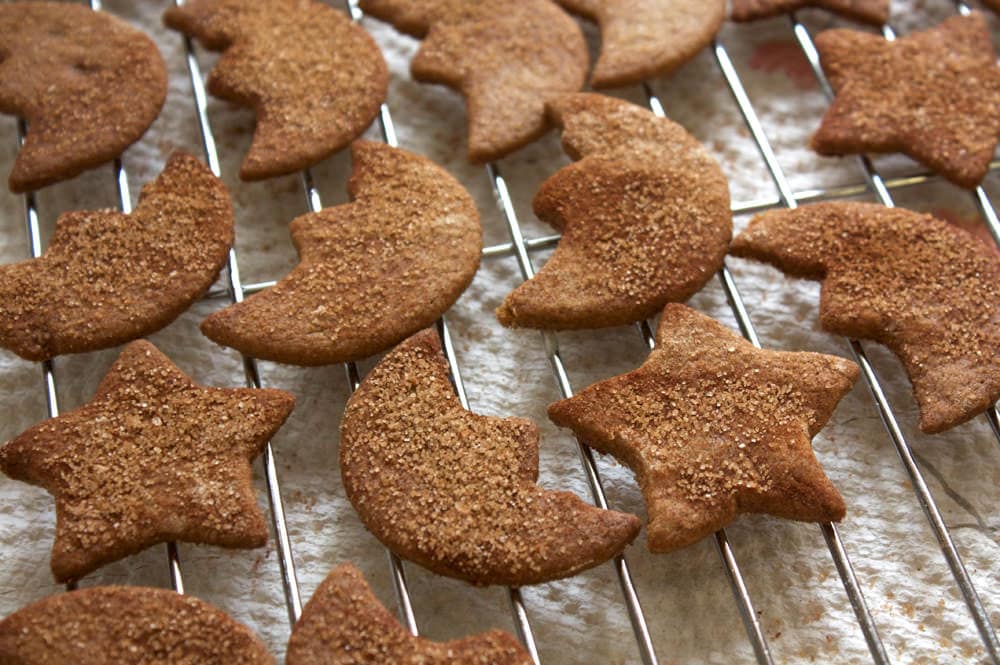 Decided the Cassie’s Squares looked a whole lot like cereal. 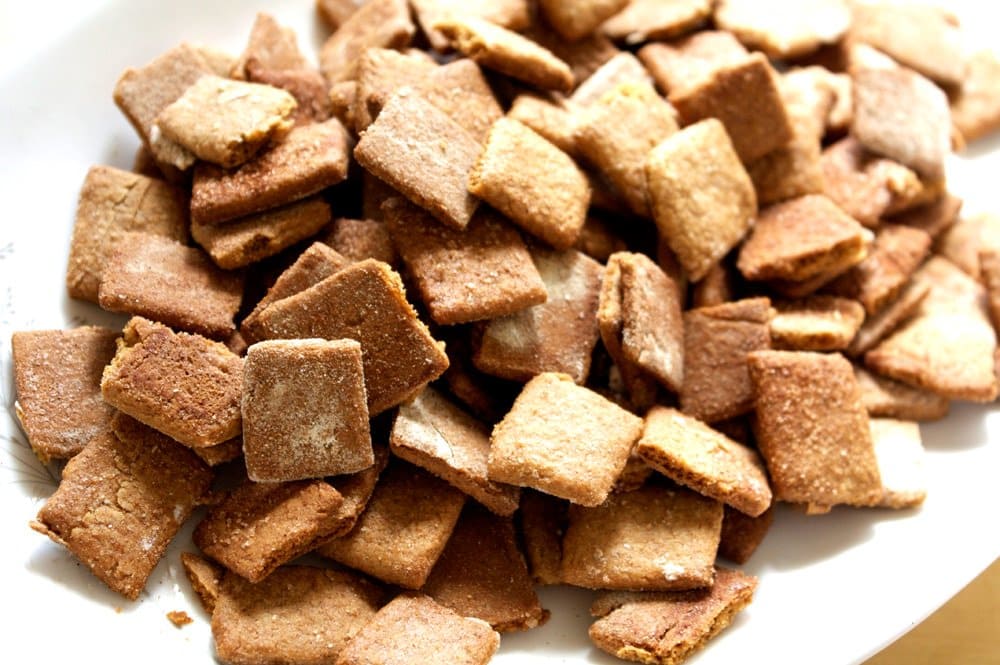 So into a bowl with some milk, they went.

It was good, but they go mushy very fast. Might try making this again and baking them longer. Never thought of making my own cereal before (other than granola). 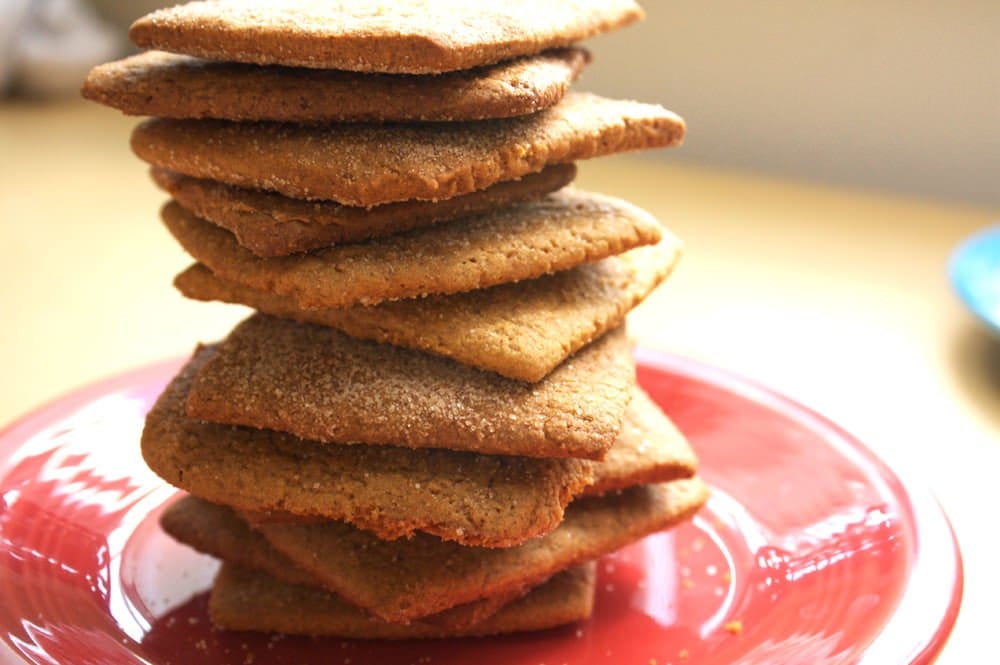 Combine the flour, brown sugar, baking soda, and salt in the bowl of an electric mixer fitted with the paddle attachment. Mix on low to incorporate. Add the butter and mix on low, until the mixture is the consistency of a coarse meal.

In a small bowl, whisk together the honey, milk, and vanilla extract. Add to the flour mixture and mix on low until the dough barely comes together. It will be very soft and sticky. Divide dough in half and form into discs. Wrap in plastic wrap. Wrap it, then chill it until firm, about 2 hours or overnight. Meanwhile, prepare the topping, if using, by combining the sugar and cinnamon in a small bowl and setting aside.

Sift an even layer of flour onto the work surface and roll the dough into a long rectangle about 1/8 inch thick. The dough will be sticky, so flour as necessary. Using a pizza cutter or cookie cutters, cut into desired shapes.

Place the crackers on ungreased baking sheets and sprinkle with the topping. Repeat with the second batch of dough. Finally, gather any scraps together into a ball, chill until firm, and re-roll.

Bake for 10 to 20 minutes (depending on the size and thickness of the cracker), until browned and slightly firm to the touch. 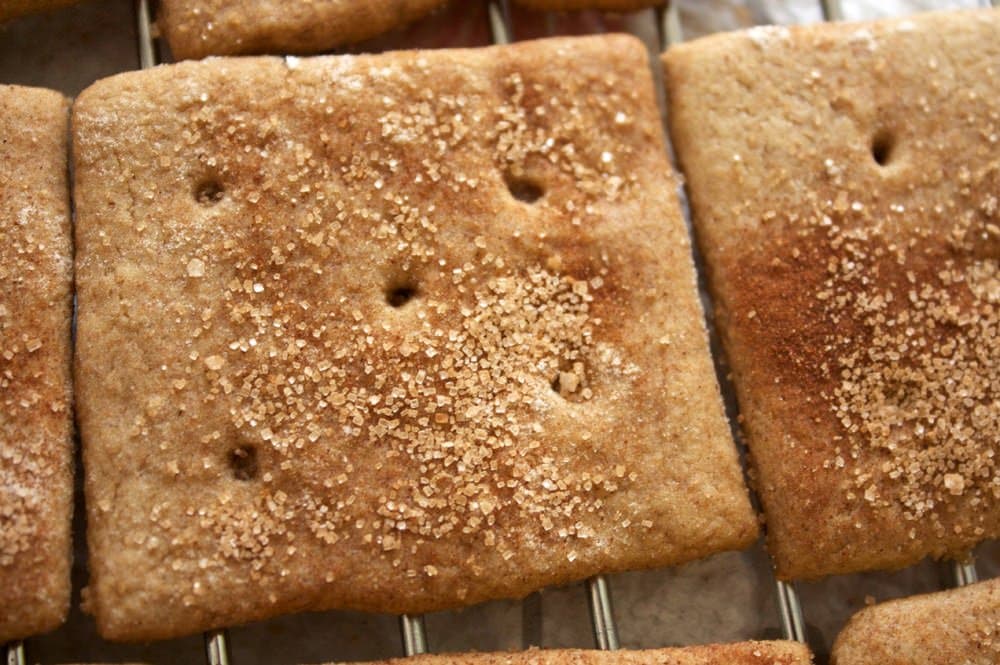