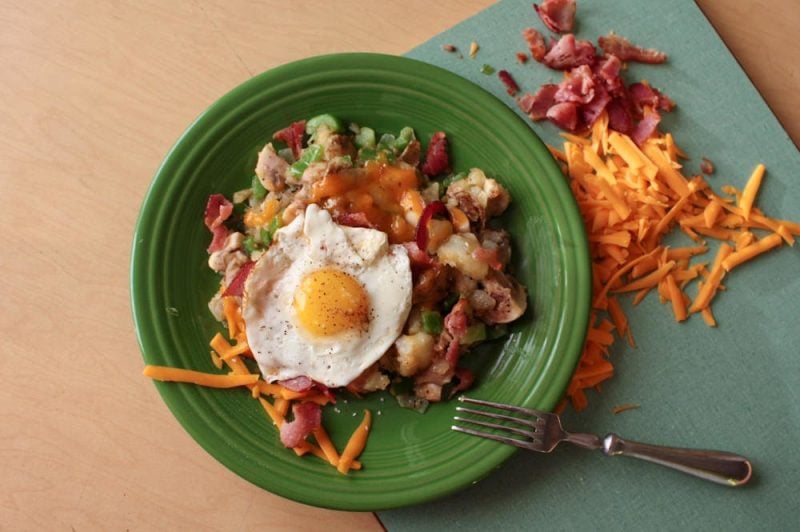 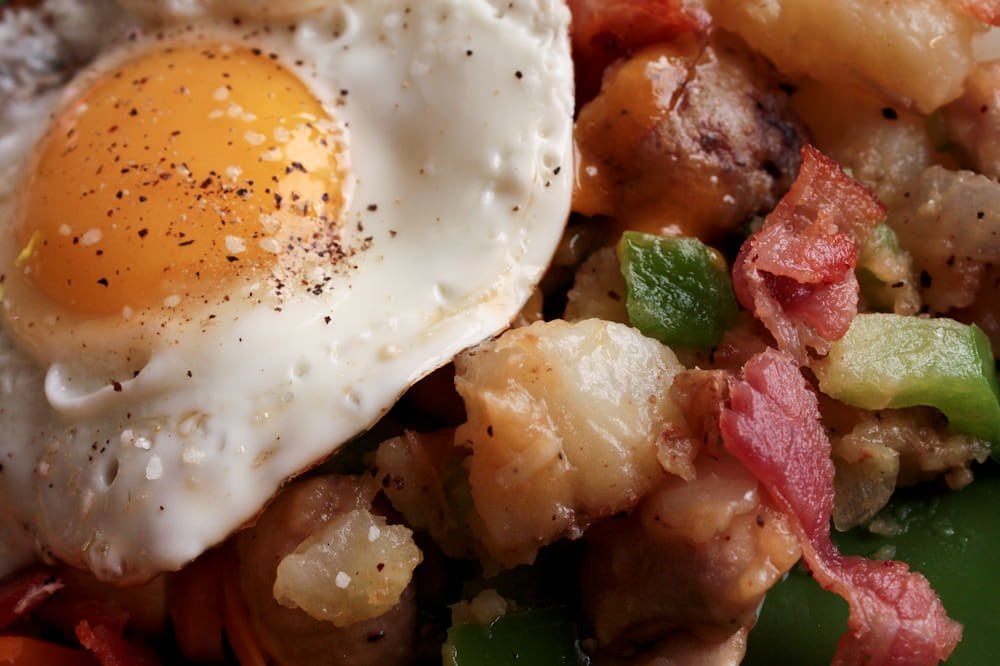 I was talking with a few of my co-workers the other day, and one of them mentioned that her husband hated it when food was “mixed together”. She said she always had to make dinners that had very distinct elements.

I’d hate to have that limitation when cooking. Some of my favorite foods are one-dish meals! Magic happens when you combine all the food groups into a well-orchestrated dish. 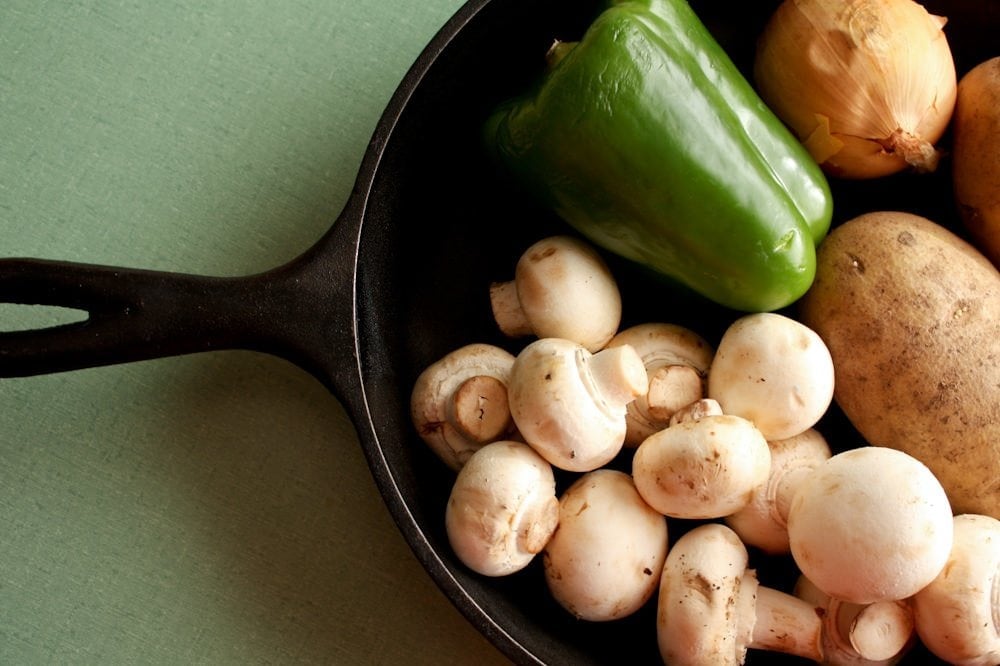 I really like being able to focus on one dish in a meal. Sure, a burger and fries are great, but it seems like your attention is split between two distinct (but complementary) foods. They are competing for your culinary love. 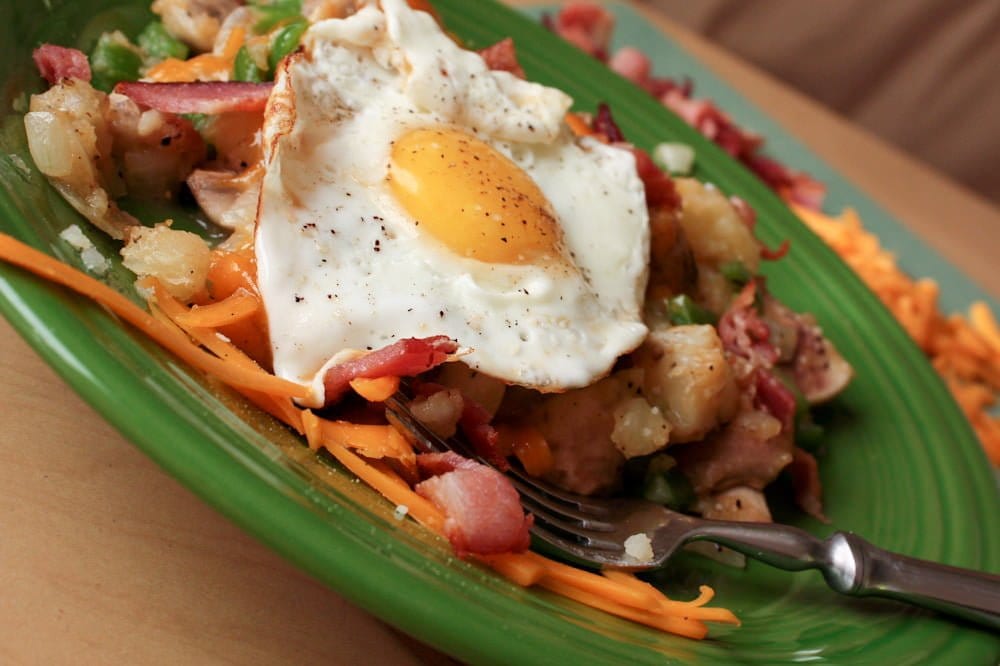 A good one-dish meal lets you give your undivided attention to the symphony of deliciousness before you. 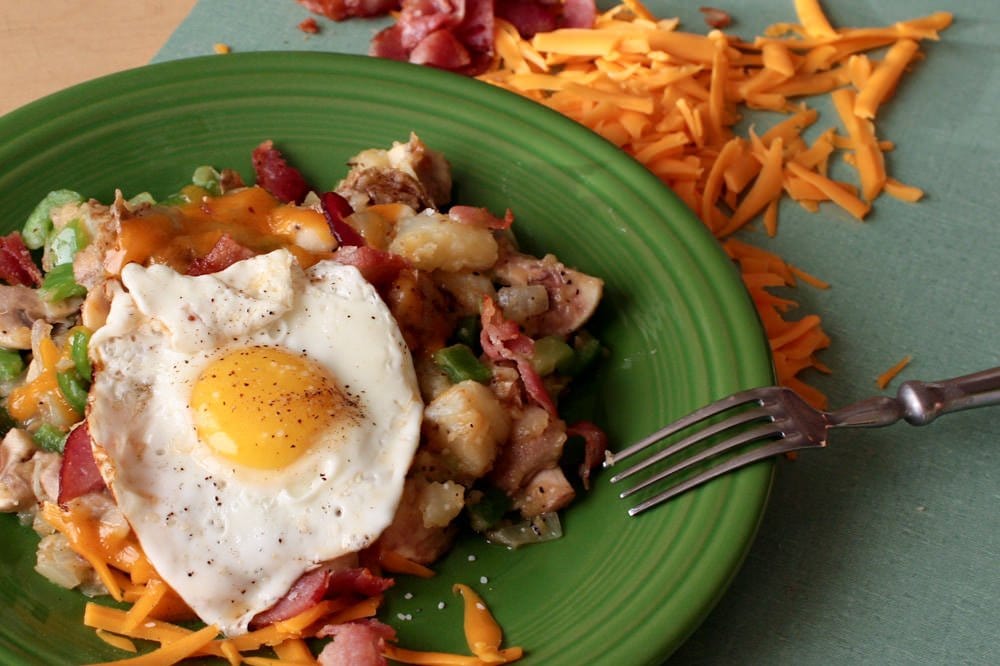 For breakfast, the quintessential one-dish meal is hash. 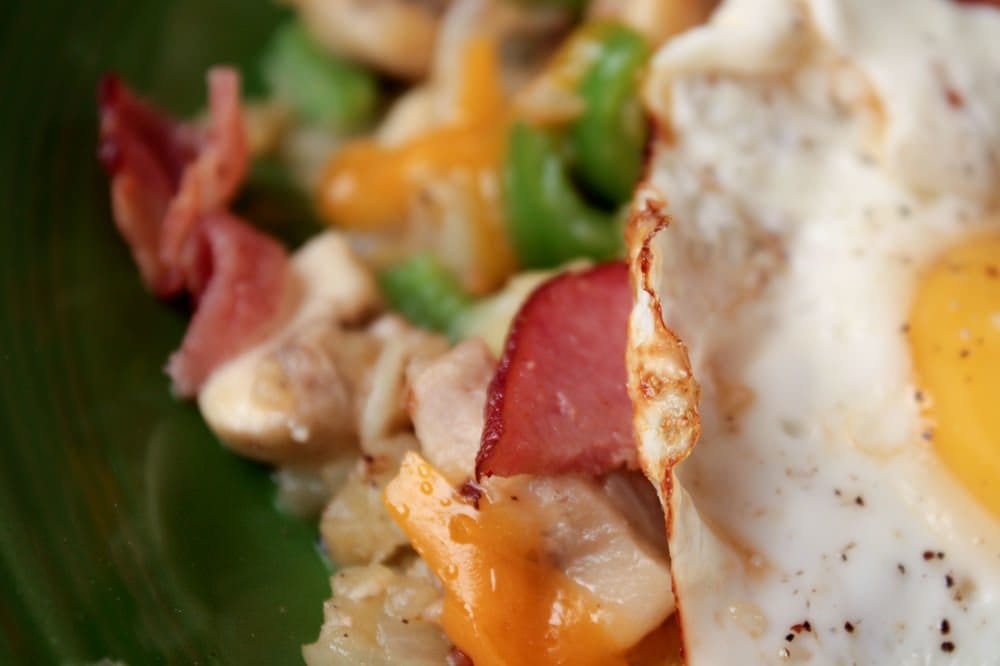 The word hash actually refers to the act of chopping up the vegetables. Usually a hash has some combination of meat, potatoes and other vegetables. 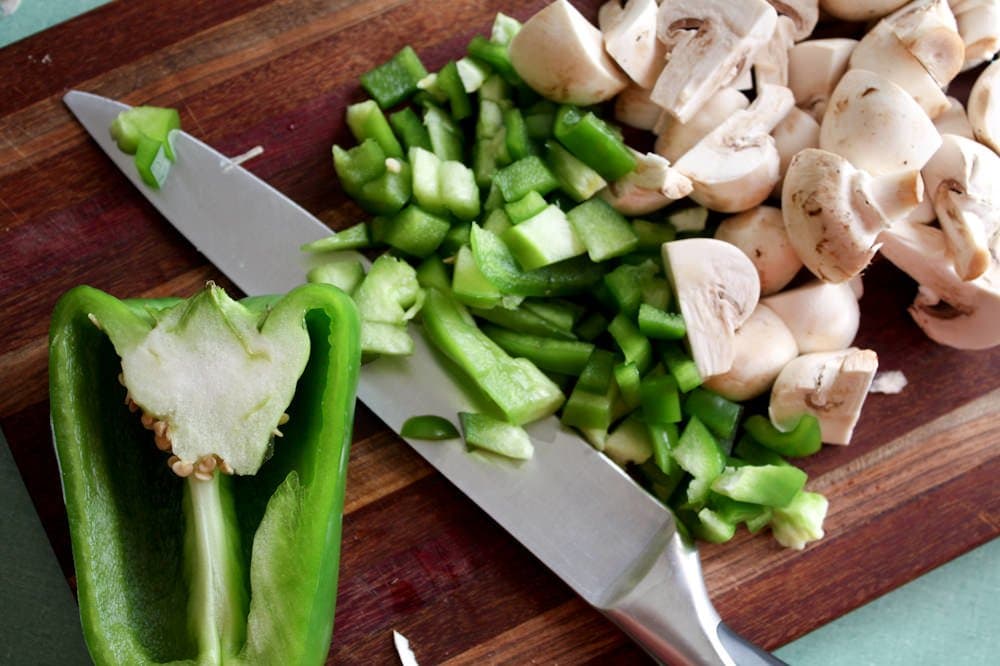 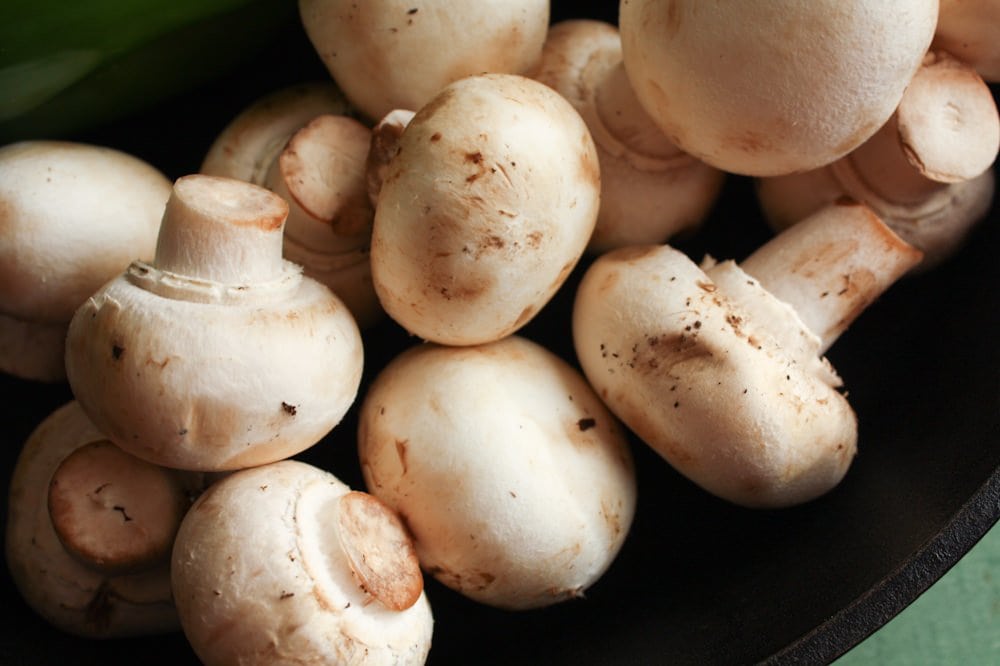 And it is all smothered in melted cheddar cheese and a delicious and gooey fried egg. 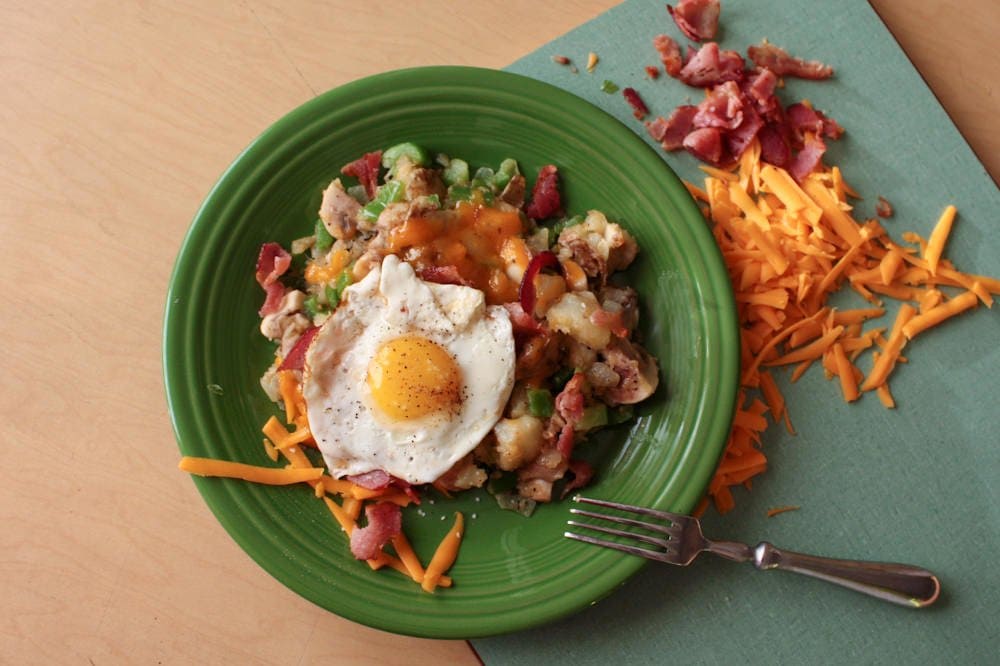 . My sister calls this her “house seasoning.” If that means you put it on pretty much anything and everything that crosses through the kitchen, then it is our house seasoning, too. 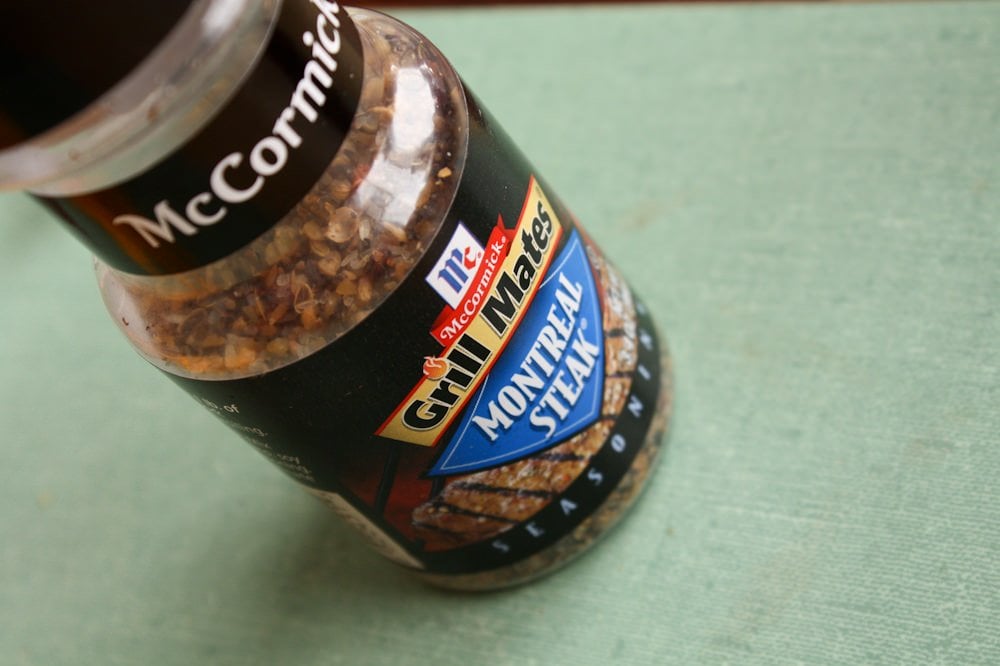 To speed up the cooking process, the potatoes get a little bit of a tanning session in the microwave to soften them before going onto the stove. Two minutes in the microwave can equal 15-20 minutes on the stove for potatoes. 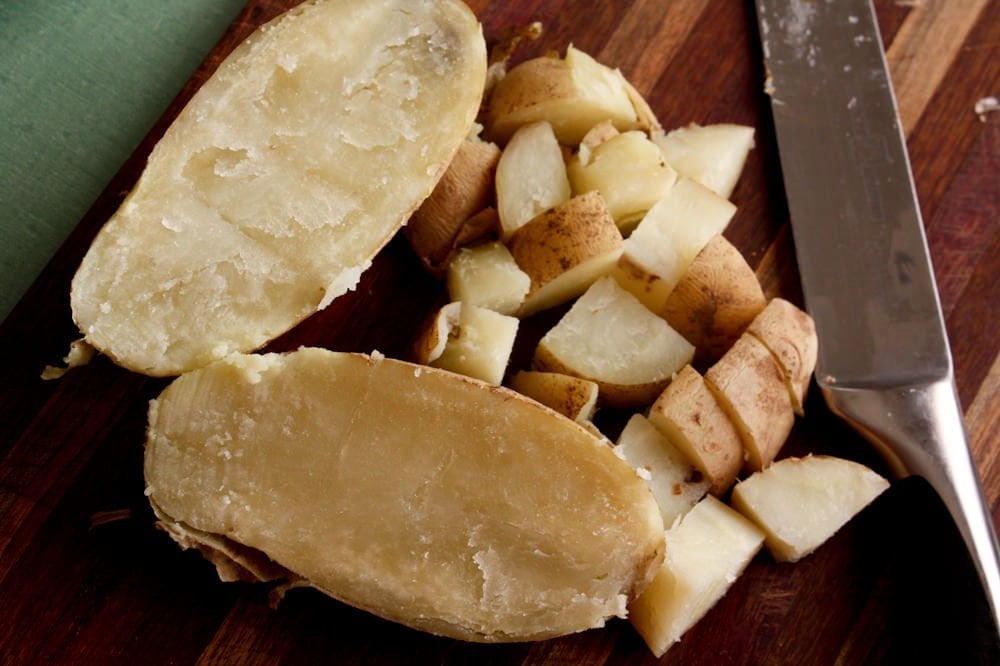 This meal comes together fast and is hearty as they get. It is definitely a Sunday meal. Make sure you use Sunday bacon. 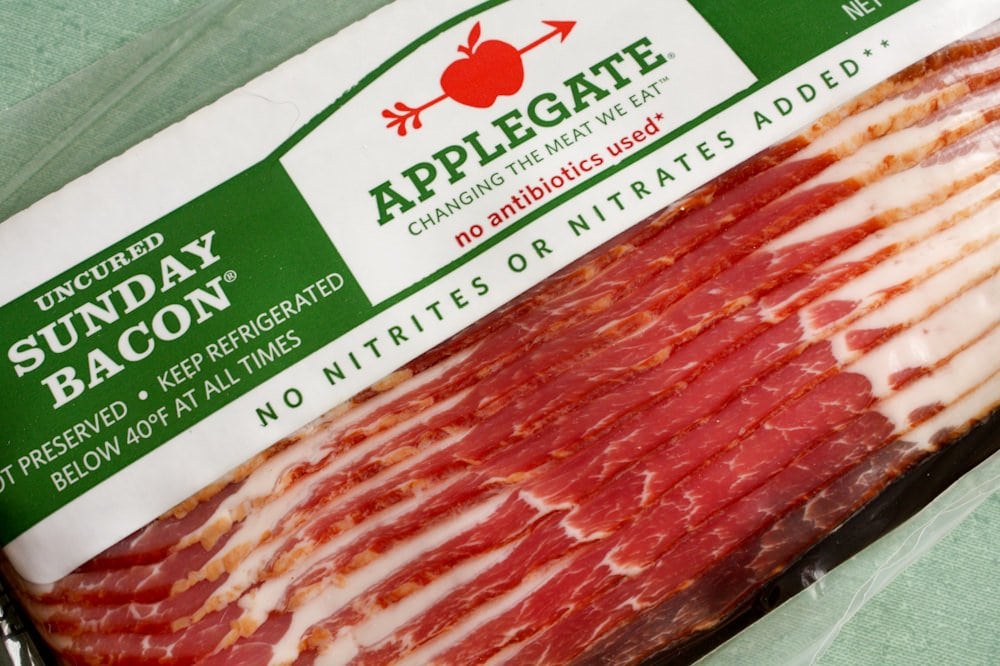 Or don’t. Really. I have no idea what “Sunday bacon” even means. I DO know that nitrites and nitrates are very, very bad if you are headache prone, like I am. Once I cut out nitrates and caffeine, my headaches dropped at least 75%.

I digress. Hash is delicious! 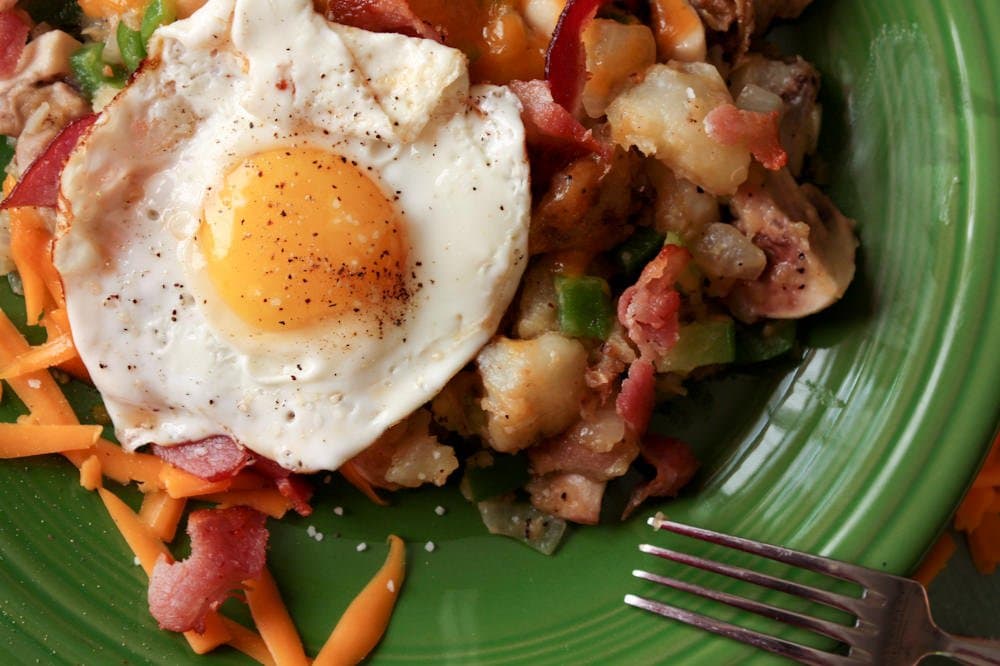 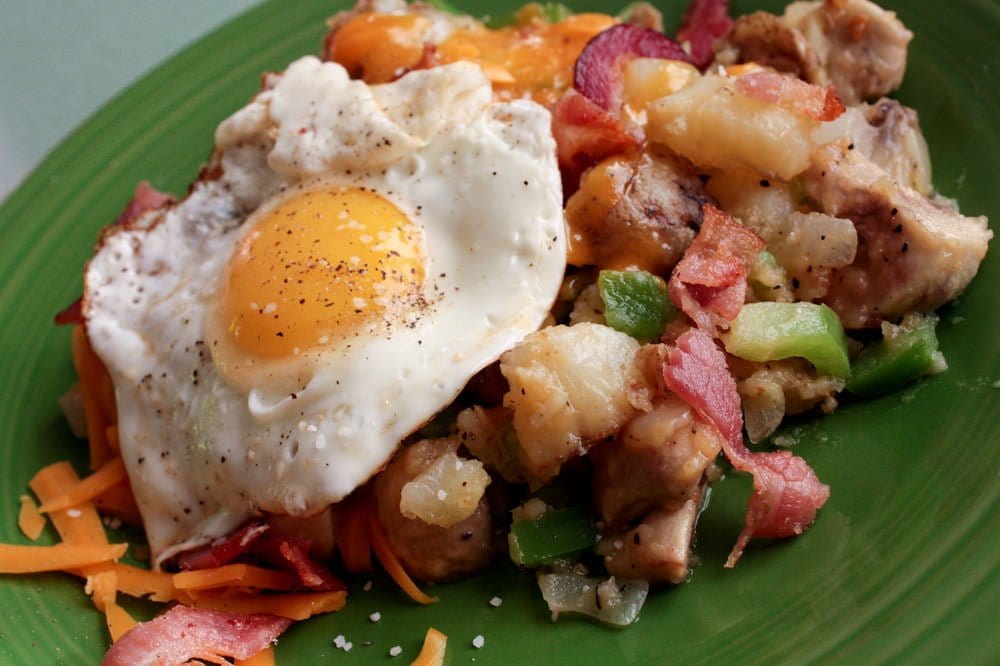 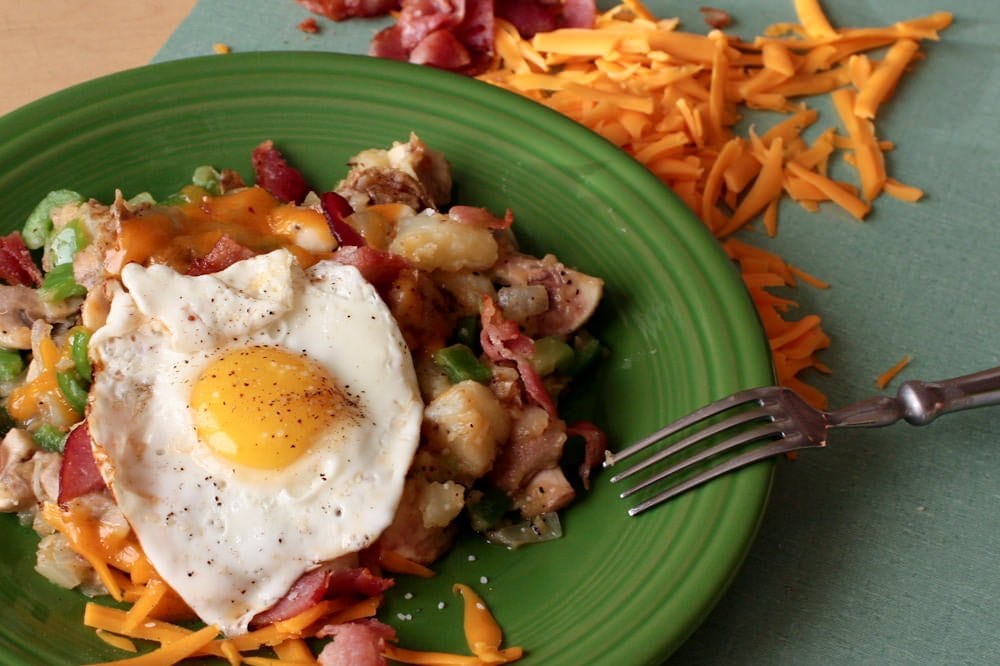 In a dutch oven over medium-low heat, cook bacon until crisp. Meanwhile, pierce potatoes with fork and cook in microwave for 3-4 minutes, or until just soft. Roughly chop. Remove bacon from dutch oven, drain over paper towels, and crumble. Set aside. Melt butter with bacon grease in dutch oven, add potatoes and cook for 2-3 minutes or until lightly browned. Add onion, green pepper and mushrooms. Salt and pepper to taste. Cook until vegetables are just soft, about 7 minutes. Meanwhile, fry eggs in separate skillet until whites are just set and yolk is soft and runny. Set aside. Remove potato mixture from heat, mix in hot sauce and grill seasoning. Divide potato mixture onto two plates, sprinkle with cheese and bacon. Top each plate with an egg. Enjoy! 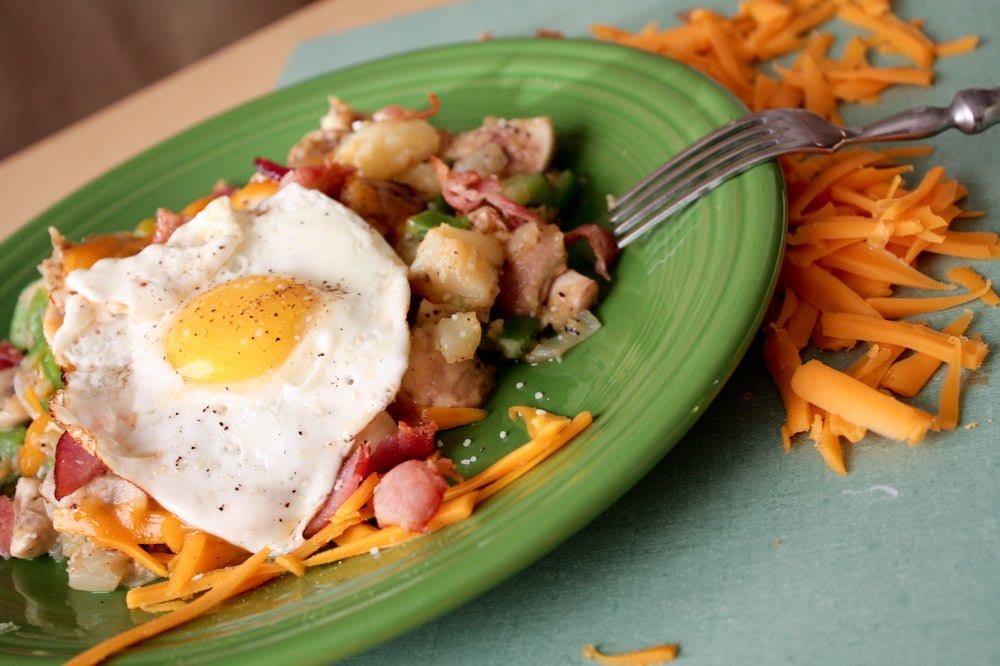 This post was created as part of the Denny’s Foodbuzz BACONALIA challenge and is an entry for a chance to win.