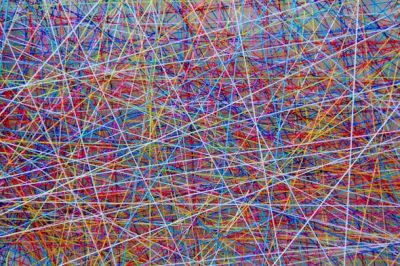 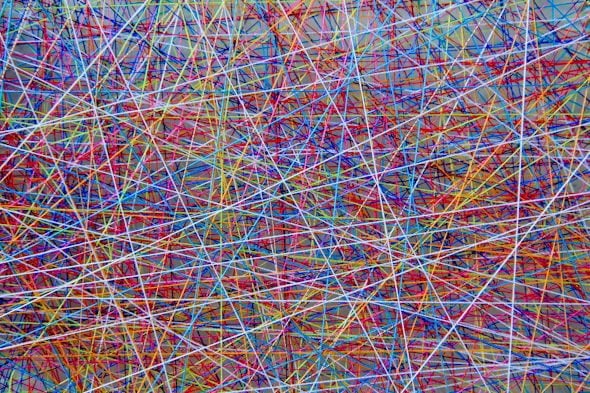 Yay! It’s time for another Pinterest Challenge—the monthly post where I talk about a project I dug out of the depths of Pinterest stagnation and brought into the light of reality. Pinning is awesome, but doing is even better.

As usual, I hit up my Must Make board to peruse all the crafty objects that really moved me to action. I narrowed it down to three pins that really spoke to me this month—a car trash bag, state nail art and a simple silk scarf top. 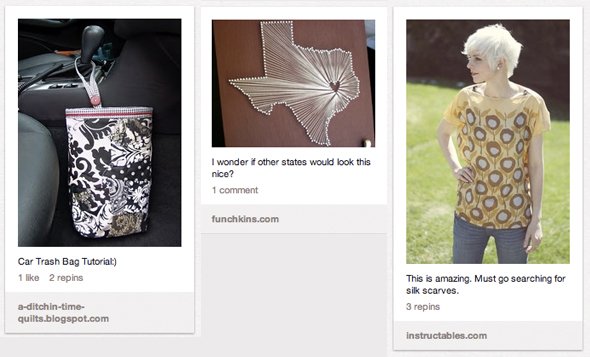 I’d all but landed on the car trash bag—I’m incredibly sick of seeing a Target bag hang off my gear shifter—but then I remembered something kinda important—my sewing machine wasn’t here. We’re slowly moving stuff into our new house and the sewing machine was one of the first things to go. So…state art it was! No sewing machine required.

I started off gathering materials by heading to Michael’s in search of the perfect base. I found my way to their wood-working section and hit up the area of the aisle with ready-to-finish plaques and boards. 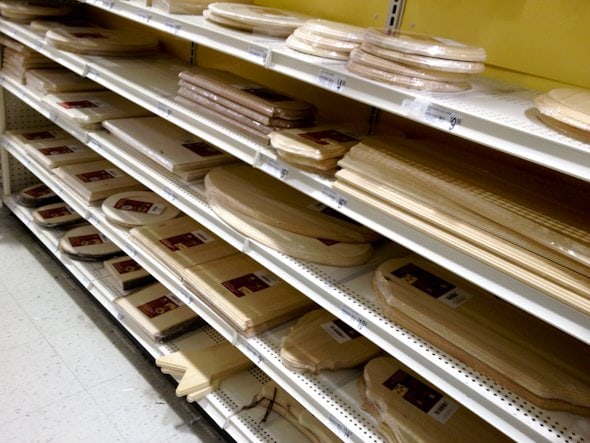 I had gone in thinking I wanted square bases, but for some reason, the only square bases Michael’s had were $9.99 each! I wanted to do both Indiana and Ontario (where Babyface is from) and I wasn’t about to spend $20 just on the bases. Especially considering I had other materials still to buy. 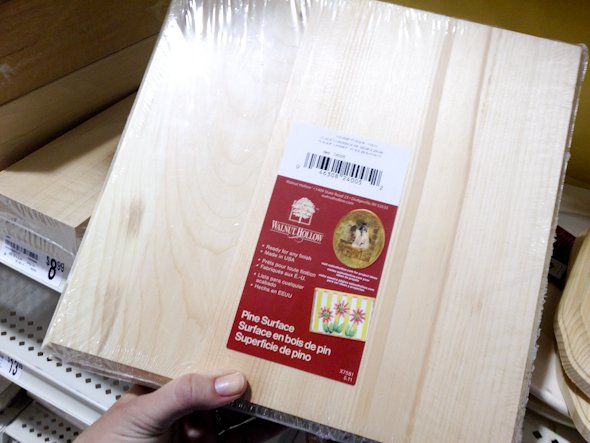 Fortunately, they had a bargain bin of not-so-fancy plaques and inside I found these rectangular ones with ornate corners. They weren’t exactly what I had in mind, but I liked their $1.99 price tag enough to make the sacrifice. The quirky, beveled edge grew on me as I worked with them, anyway. 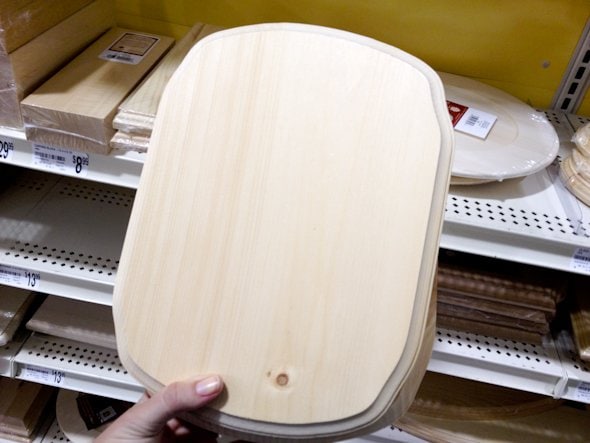 Once home, I took a fine grit sandpaper to the face of each plaque. Because of the bargain bin quality, I felt like they needed a bit of clean up. Plus, sanding with the grain helps stain soak in better (spoiler alert: I’m going to stain these). 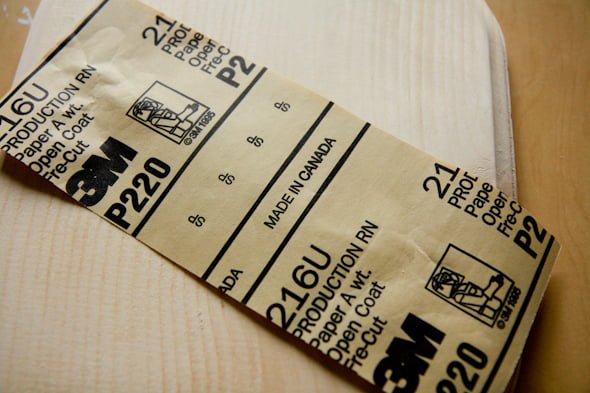 After sanding, I went ahead and printed out my state outline templates. First up, I measured the face of the plaque and decided about what size I’d like each outline to be. 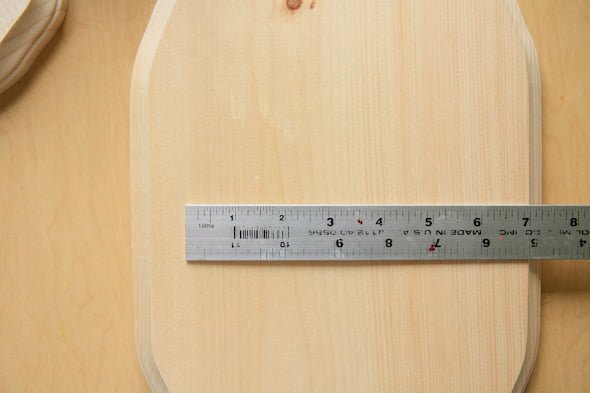 Then, through the magic of Google and Photoshop, I had myself two nice (although completely inaccurately scaled) outlines. 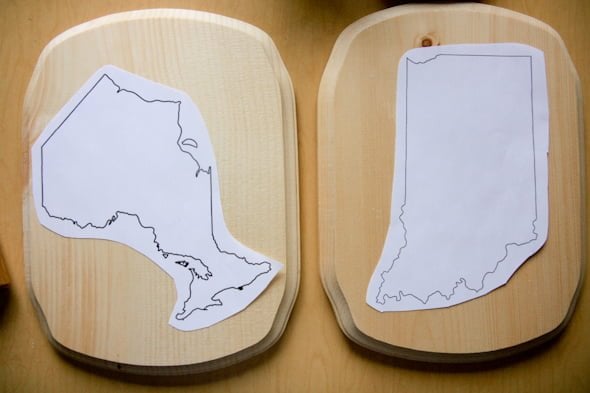 I set those outlines aside and started work on the base color. Almost all of these types of art out there that I’ve seen use brightly-colored, solid backgrounds and while that is swell, I wanted something that looked a little more classic. I decided a stain was where it was at and landed on this sunbleached shade. 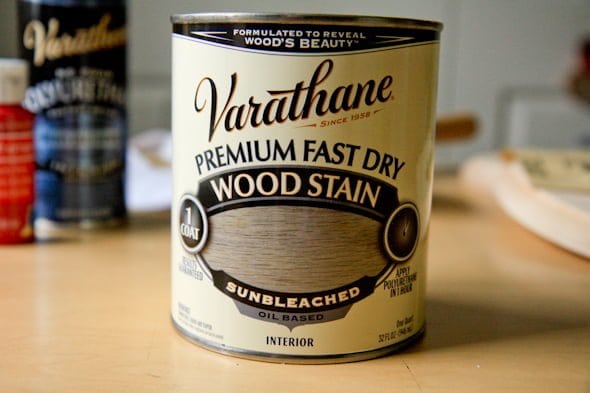 I followed the manufacturer’s directions and applied one, thick coat with a sponge brush. Then I let it seep into the grain for a few minutes, and then I wiped the excess away with a clean cloth. 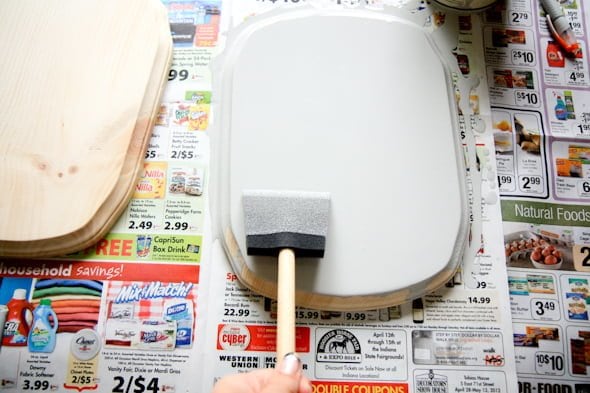 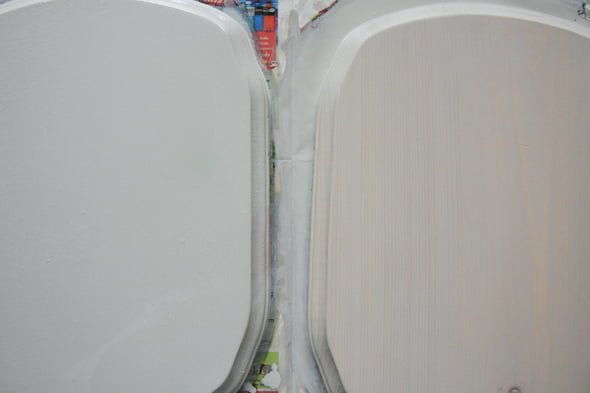 After an hour of drying, I pulled out my hand-dandy can of spray polyurethane (LOVE this stuff), took the plaques outside and gave them a couple of coats over the course of the afternoon. I chose satin because I wanted a nice, weathered-wood look, but there are semi-gloss and glossy versions that could look very cool as well. 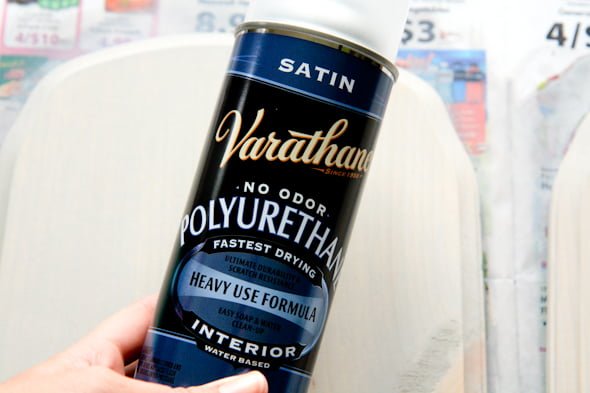 After a few hours of dry time, I brought the plaques back inside and taped down each of the outline templates with masking tape.

And drew on the hearts where we both grew up geographically. This caused a bit of a problem, because both of our hometowns are on the borders of our state/province. This sucks. You’ll see why later. 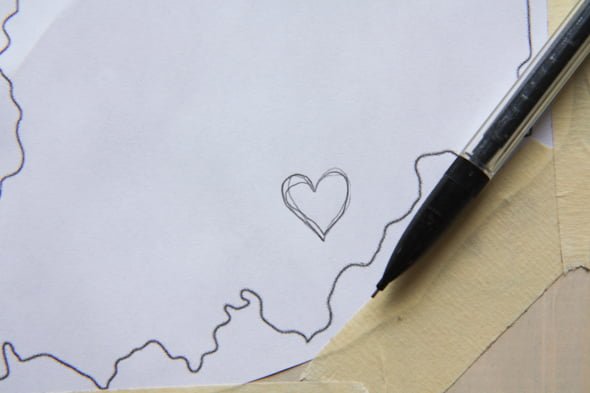 I very, very quickly decided the heart was way too cutesy for my blood, and switched it over to a circle. 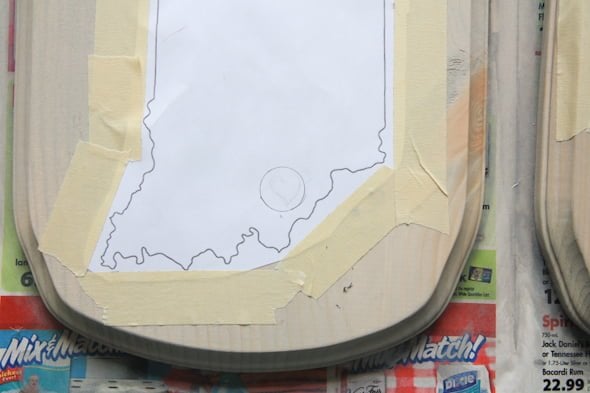 Once the templates were ready to go, I pulled out the nails and got to hammerin’. These little suckers were in the section with upholstery tacks. There were quite a few different metals and colors to choose from, but I went with a glitzy brass for a bit of visual interest.

The nailing part actually didn’t take nearly as long as I thought it would. I just eyeballed the spacing, tried to hammer them in halfway straight and try not to bust my thumb open. I wasn’t too terribly worried about it being perfect. I think the appeal of these kinds of handmade art pieces is that they look handmade. 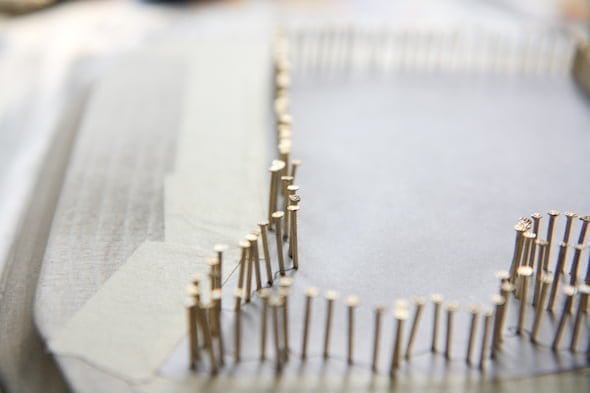 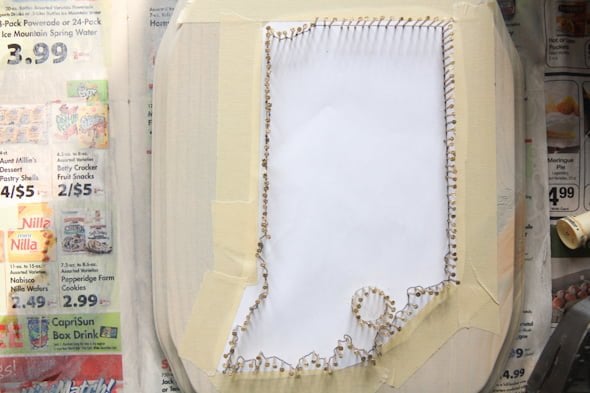 I then tore up the masking tape and paper and pulled out my string of choice. I got this stuff in the jewelry-making section of Michael’s. I really liked that it was a little shiny, but still thin and pliable. 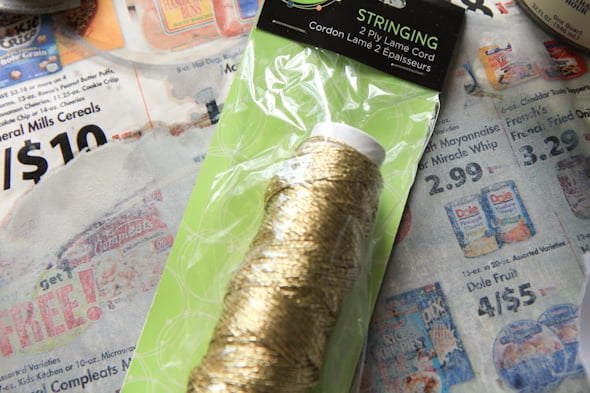 I tied off the end of the string in one corner (in Gary, Indiana, actually) and then started working my way around the nails—connecting to the middle circle after each one. It was going really well. Until I got to Southern Indiana. Then it got all cray-cray and messy because of the odd shape of the river border and how close the circle was to the edge, but I kept going and ended up with this: 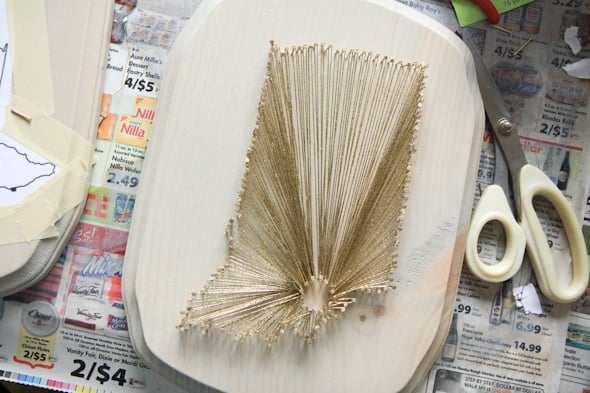 I tied off my knot, cut off the excess string and immediately turned to Babyface and said, “I hate it.” And I did. I hated how messy it looks down by the Ohio River. I hated how the threads were so thick in some places because I had to wrap 20-30 times around some of the nails in the circle. After hours of nailing and wrapping, I was not happy. 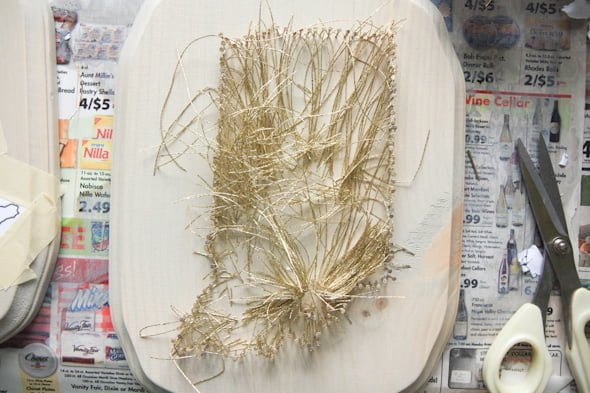 I was pretty much ready to give up on them, but then I glanced over and saw my stack of sewing threads and inspiration struck! I had Babyface take out the circle nails (I was too frustrated to touch it, yet) and then I sat down in front of an SVU marathon after dinner with my plaques and stacks of thread. 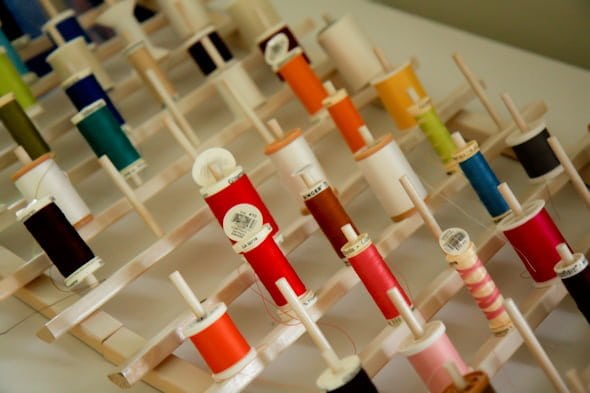 I started winding color after color onto the nails, not paying any attention to patterns or arrangements. I went North to South, East to West, up and down, diagonal, all around. I used metallic thread, white thread, neon green thread. I went all kinds of crazy pants. 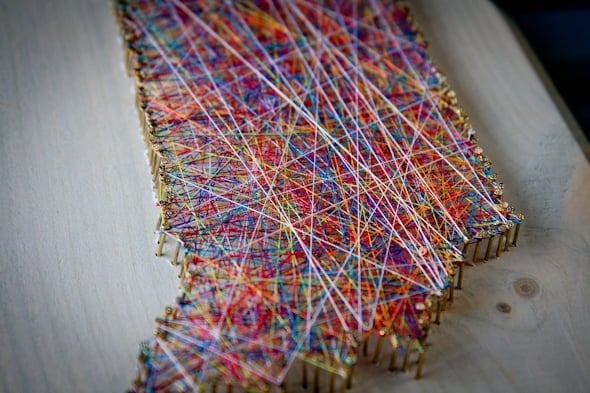 I kept going until it was thick enough to where you couldn’t see the old nail holes from the circle o’ nails. I stepped back, took one look at it, and jumped up and down with excitement. I loved it! Perfect! 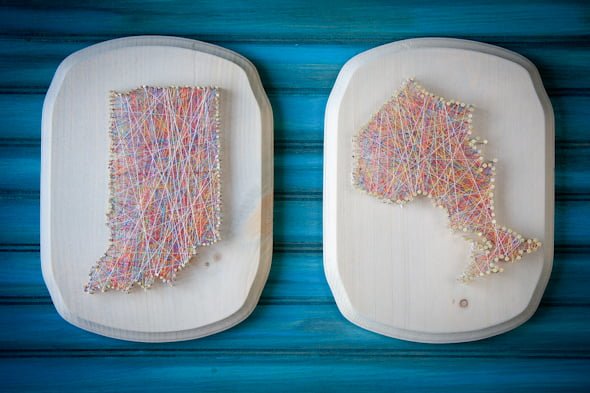 I couldn’t put my finger on it, but there was something about the original state art that I didn’t love. Now that I see my version, I think I get it. I think the original version was too perfect and cutesy for me. I love the chaos contained in the metal outline in this version. I love all the colors. I love that they look simple and plain from far away, but complicated and layered up close. I’m so glad I ended up hating the other version, because if I hadn’t, I would have never discovered how much I love this one!

I am not entirely sure they are finished. I’m going back and forth about a border. Part of me wants to paint the beveled edge of each plaque a metallic gold, but part of me, again, loves the simplicity of how they are now. Anyone have any opinions either way?

I can’t wait to find a spot for these in the new house.

Have you ever had a project that you were unsure of at first but ended up loving?