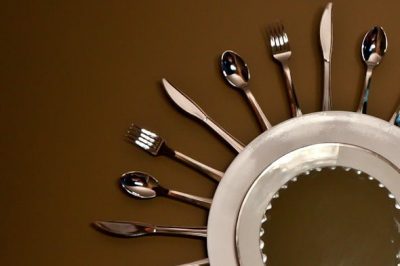 I’ve had a few folks ask me what is going to happen to the monthly Pinterest Challenge now that I’m co-writing a whole other blog specifically focused on DIY. For those of you just tuning in, the Pinterest Challenge is a monthly post where I actually stop pinning, get off the computer and go do a project that was inspired by Pinterest.

I’m happy to announce that the Pinterest Challenge is here to stay on Wholefully! We’ll be co-opting the idea over at The Broken Plow. But you’ll still see a monthly post here revolving around my own personal Pinterest projects. I’ll be focusing on food, kitchen decor, health and beauty over here and we’ll try to keep the hardcore homeowner’s stuff over at TBP. Sound good? Sounds good! Onto this month’s project!

The inspiration for this particular project started offline, inside a Target store. Babyface and I were in there browsing and stumbled upon this really amazing sunburst clock made out of forks and spoons. I thought it was such a cool idea that I snapped a photo, but we weren’t too keen on the $40 price tag or the fact that the bright colors made it a little too juvenile for our tastes. I stashed the photo in my iPhone determined that we were going to make our own version. 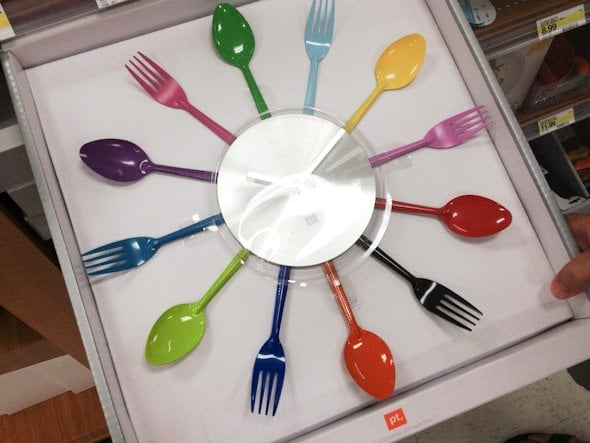 Then all-destiny-like, the very next day, this pin popped up as I was browsing Pinterest. It was exactly what we wanted! Quirky and interesting, without being juvenile. I also loved the idea of a mirror instead of a clock. I knew that very second that this was going to be my next Pinterest Challenge. 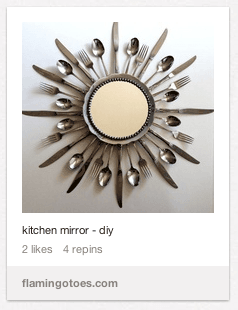 The original pinned post had very clear instructions for their method, which helped greatly, but I went kinda off on my own with this one. I really wanted something that was sturdy, but light, beautiful, but simple and most importantly (isn’t it always?) cheap!

To get started, I gathered my supplies. I bought an unfinished 8″ circular mirror from Joann’s, a nice white china plate with silver trim and a gold plastic charger plate from Goodwill, plus some hanging wire from a hardware store. I was all ready to use regular old silverware when I found out…the Goodwill doesn’t sell flatware. So we headed over to Meijer to find some cheap flatware, and the cheapest they had was about $1 per piece. This definitely didn’t fit my “cheap” rule. I was about ready to give up, when we headed over to grab some paper towels, Babyface turned around and saw these: 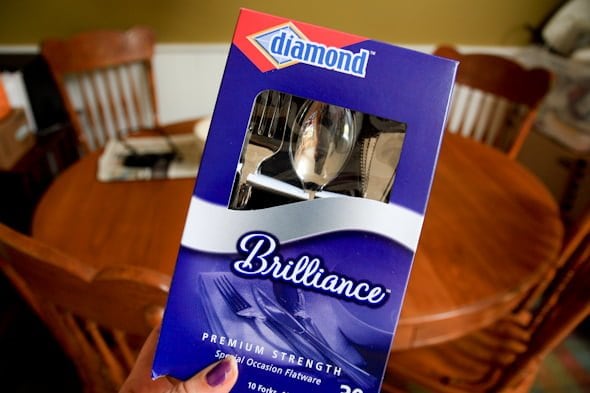 Plasticware that looks remarkably convincing. And definitely convincing enough up high on the wall. Plus, they were light, which meant I wouldn’t have to worry about loading down the mirror with 10 pounds of flatware. Plus, at $3.49 for a box of 30, they were definitely the right price. Score!

The mirror assembly was actually really quick and painless. First of all, I super glued the mirror to the china plate from the Goodwill. I just eyeballed it for center. It’s a little off, but not enough to notice unless you are looking at it straight on. That’s pretty much the whole story with this mirror. It’s a little bit off, but it adds character, right? 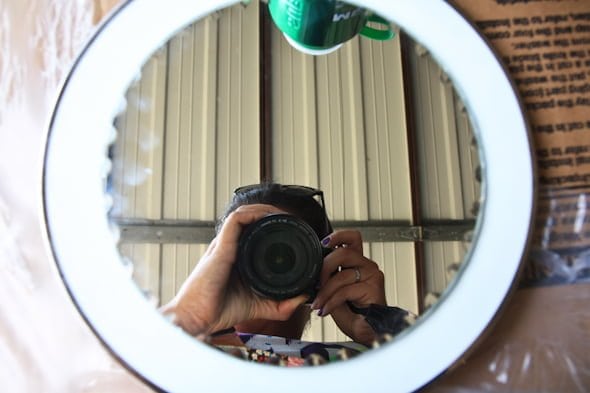 While that was setting up, I took to the gold plastic charger with some white spray paint. I thought for a hot second about leaving the charger gold, but I figured white and silver is a pretty timeless combination. After a few coats and overnight dry, I had a white charger.

Next up, I punched a couple of holes in the back of the charger to run my hanging wire through. Since my charger was plastic, I just used an icepick to make the holes. 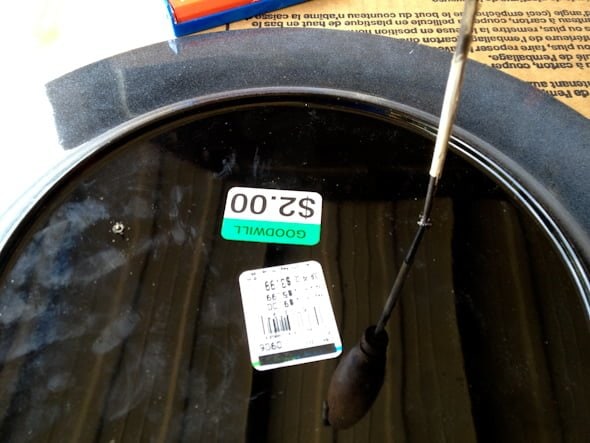 Next step was to get down my silverware arrangement. I did a few different patterns and practices before I landed on this layout. Which I snapped a photo of with my phone for reference. 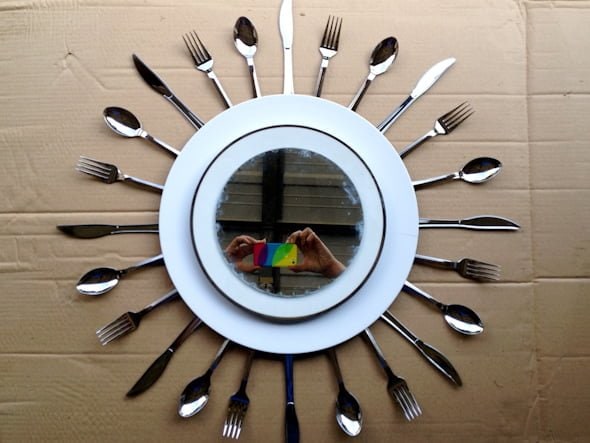 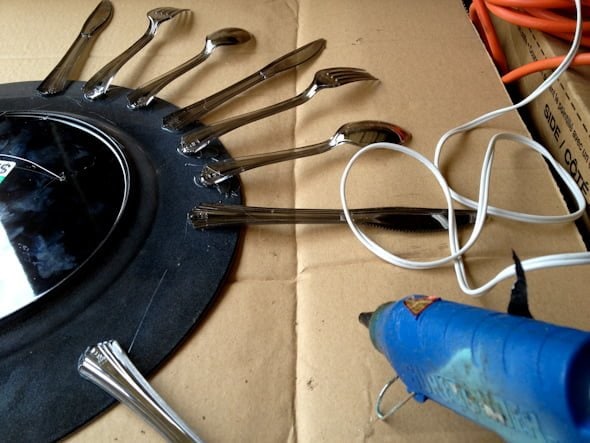 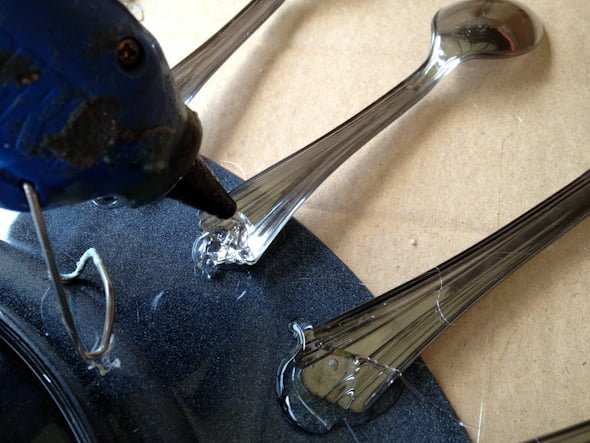 After the glue had dried, I loaded up the back of the ceramic plate with hot glue and pushed it solidly onto the front of the plastic charger. I was originally going to use super glue for this step, but I though it’d be worth a shot to try the hot glue and it feels really solid, so I stuck with it! 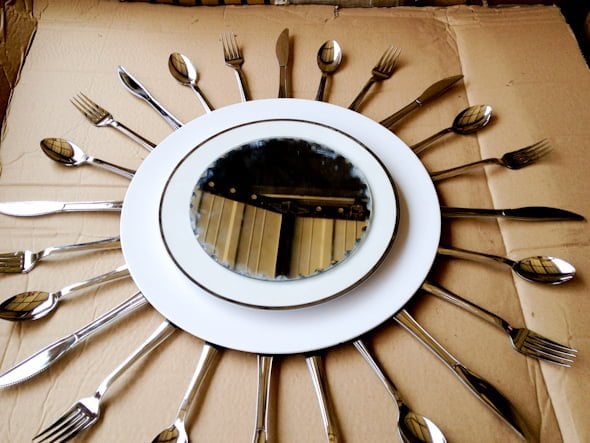 Then I cleaned it up and hung it up in my dining room nook! 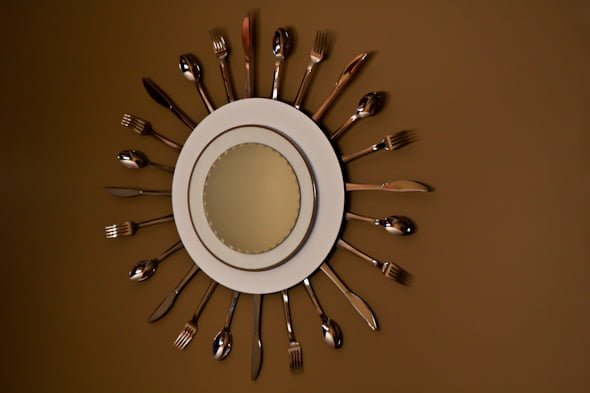 I doubt this is the permanent home for it (and that certainly isn’t the permanent paint color of this room) but for now, it adds a fun bit of quirky elegance to the space. I absolutely love it! 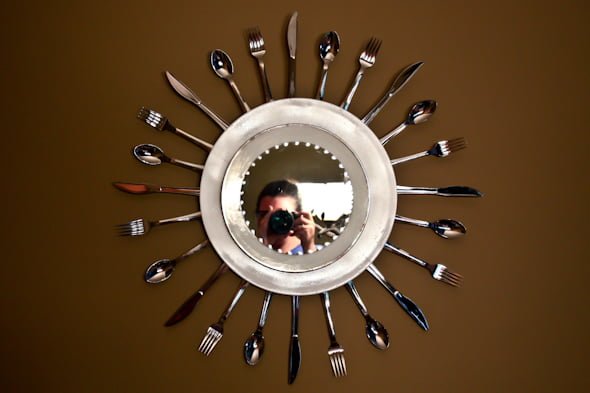 Ready for the price breakdown?

I like that price tag a heck of a lot better than the $40 one! Plus, I like my mirror even better. I say we can call this another successful challenge!

Have you ever seen an item in store and decided to make it yourself?