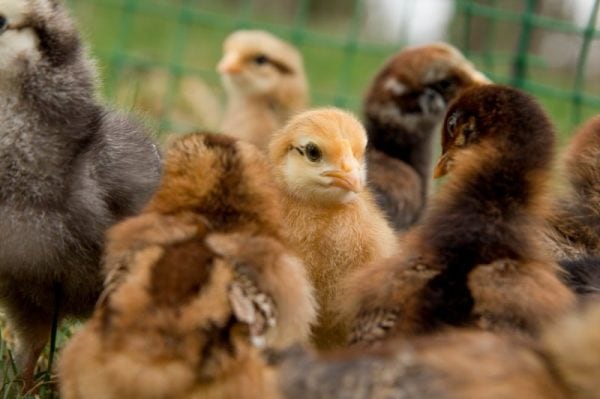 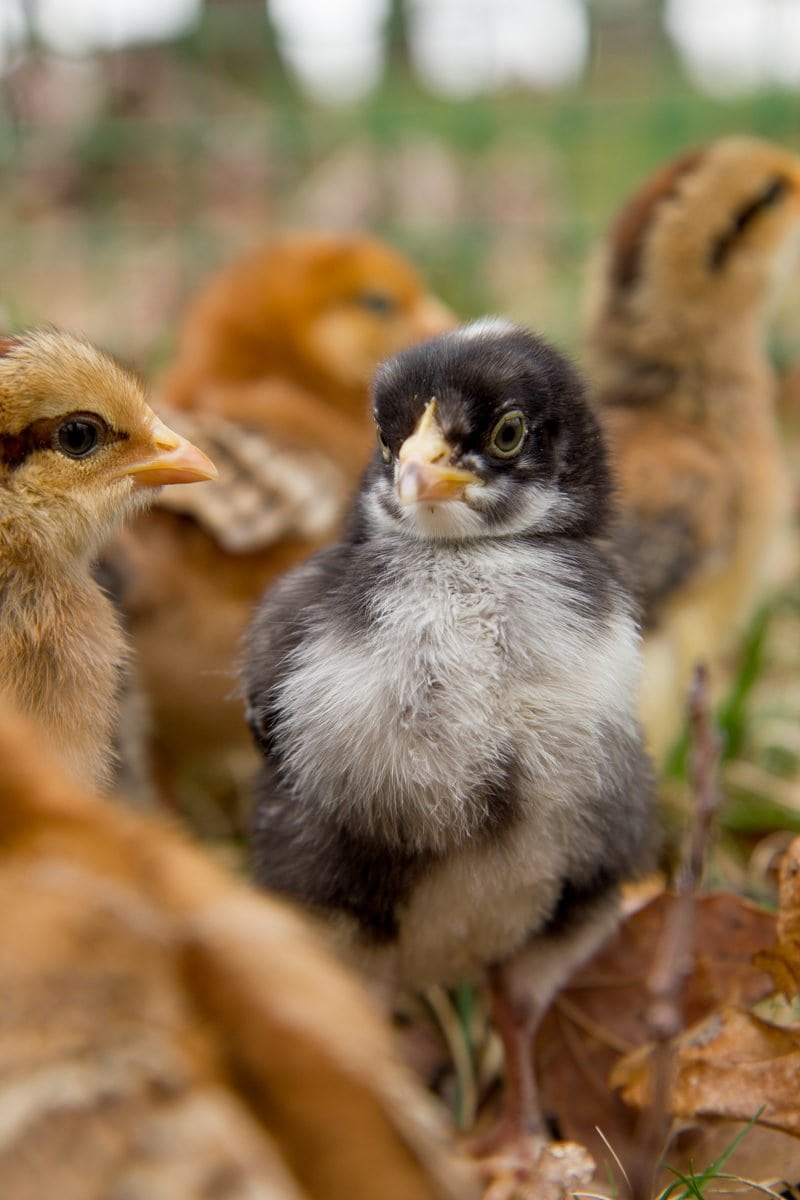 No, this post isn’t a pregnancy announcement (no, just no), it’s to introduce you to the 12 newest residents of the Broken Plow. We got chickens!

We’ve been talking for years about getting chickens, and for one reason or another, we kept putting it off. Our biggest hesitation recently has been that we really aren’t tied down by anything—my work can travel with me anywhere, Craig is a stay-at-home-dad, and Juniper isn’t in school yet. If we wanted to, we could literally pick up tomorrow and go spend a month on an island somewhere. We liked that possibility. But there is one flaw with that logic—we’d never do it.

Seriously, it sounds amazing, but that jet-setting lifestyle just isn’t our thing. We’d have lots of fun for the first few days, and then miss our bed and our backyard. What is our thing? Building a beautiful, comfortable, welcoming homestead right here. So, we put aside our traveling pipe dream and placed an order for baby chicks late last month. I’m all about living fearlessly in 2015, and ordering a bunch of baby birds on a whim is me being fearless!

I’m so glad we pulled the plug. It feels incredibly right to have baby chicks running around on the Plow. Gosh, they are adorable. 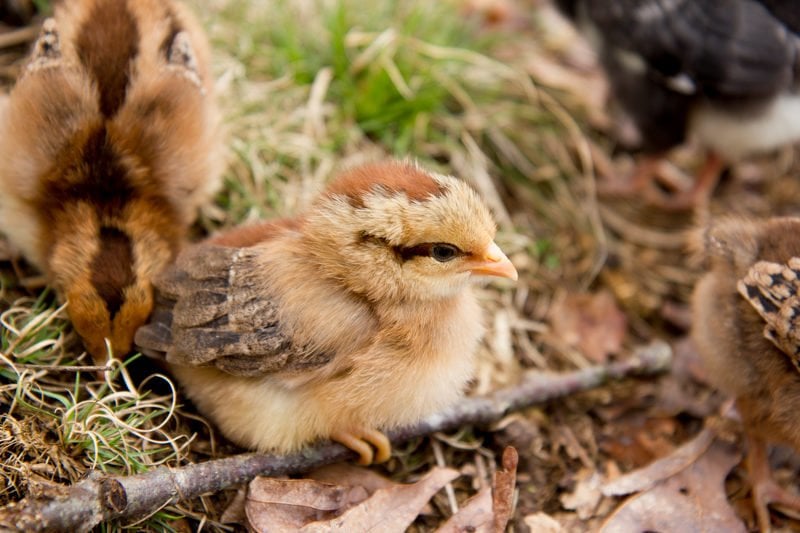 Because we made the decision to get chickens so late in the normal chick hatching season, all of our local hatcheries were out of stock. The local feed stores had some chicks in, but they were all straight run chicks (meaning you get what you get—both hens and roosters), and we didn’t really want to deal with a half-dozen roosters on our first go of it.

We ended up ordering from an online hatchery—Meyer Hatchery. We liked them because they were still relatively local to us (Ohio), and they had really great reviews online. A lot of people had really great luck with them. 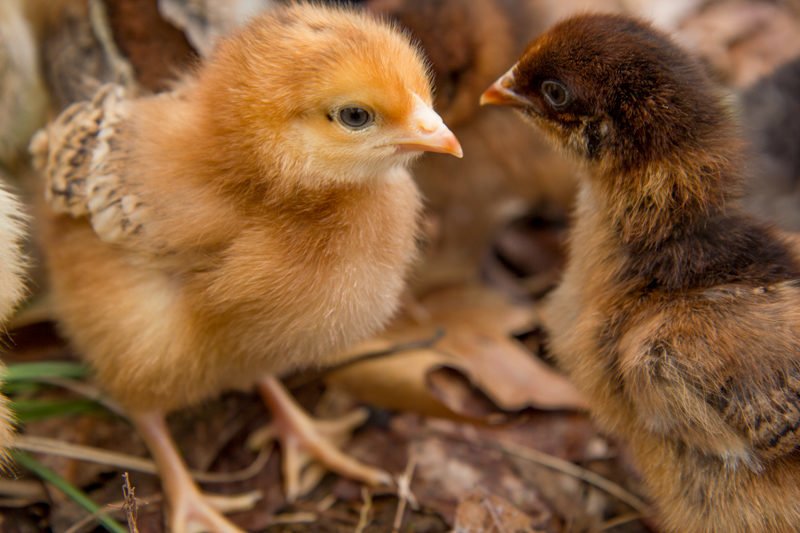 Because we like living on the edge, we ordered a rainbow pullet pack—it’s basically like the grab bag of female baby chicks. The hatchery grabs a few of the nice looking chicks from each variety that is hatching that day and sends them to you. They guarantee you’ll get at least five different varieties, and a mix of brown egg-layers, white egg-layers, and colored egg-layers. And they guarantee 90% female birds. Perfect for us! 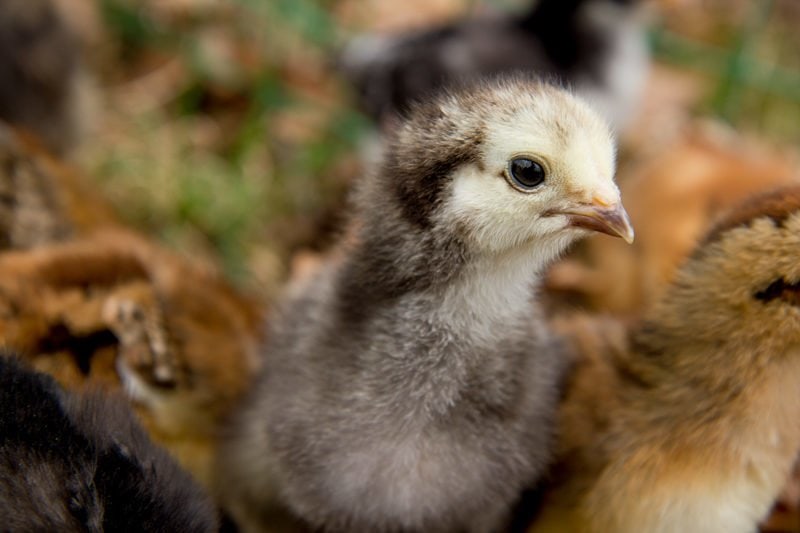 We placed an order for 15 birds, which sounds a little crazypants for first-timers, but we knew we wanted to go big. If all 15 birds produced “normally,” we could get between 7-8 dozen eggs per week during prime production. Craig, Juniper, and I go through 2-3 dozen per week on our own, plus we’ll be providing eggs for my parents (who live on the other side of our lake, if you didn’t know), and we’d love to be able to donate some each week to our local food pantry.

Unfortunately, there were some delays with shipping the birds, and we lost one in transit. It’s okay to ship freshly-hatched chicks because they can survive off the egg yolk in their tummies for 48-72 hours. We thought that shipping from Ohio to Indiana would give them plenty of time to get here, but by the time I picked them up from the post office (at 7am, in my jammies, after driving at not-so-legal speeds on country roads), they were going on 75 hours since hatching. Plus, the temps had dropped during those few days, and even though the chicks were boxed up with heat packs, it was just too much for one to handle. 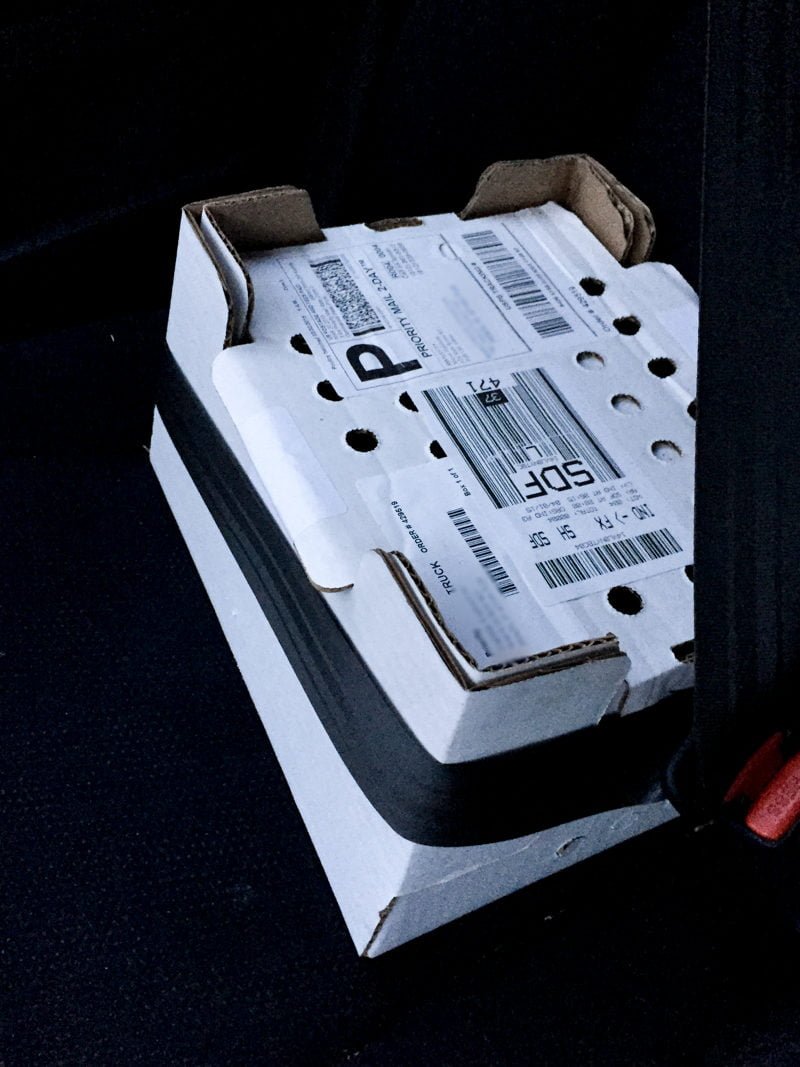 There were two other birds that were very weak in the box, and we tried our darndest to nurse them back to health. We were literally dropping water in their beaks with an eye dropper to try to bring them back from the brink, but we ended up losing both of them. They were the chicks that were in the corner of the box, furthest away from the heat pack. The travel stress was just too much for them. It’s easy to think if we were more experienced chicken farmers, we might have been able to save them, but I know we did everything we could do. They just weren’t strong enough to make it through the three-day trip across state lines.

Thankfully though, the remaining dozen chickies are super healthy, super happy, and growing like weeds. Whenever you take on animal husbandry, you know you are going to eventually have to deal with death, and we got a primer on it pretty quickly. It’ll never be easy to deal with a sick or dying animal, but I’m proud of how both Craig and I handled it.

I’m glad all of our other ladies are doing so well. And, next time we bring in new chicks, I think we’ll skip the shipping process and instead hit up one of our local hatcheries. I know a lot of people have success with shipped chicks, but it just isn’t worth the variable for us. 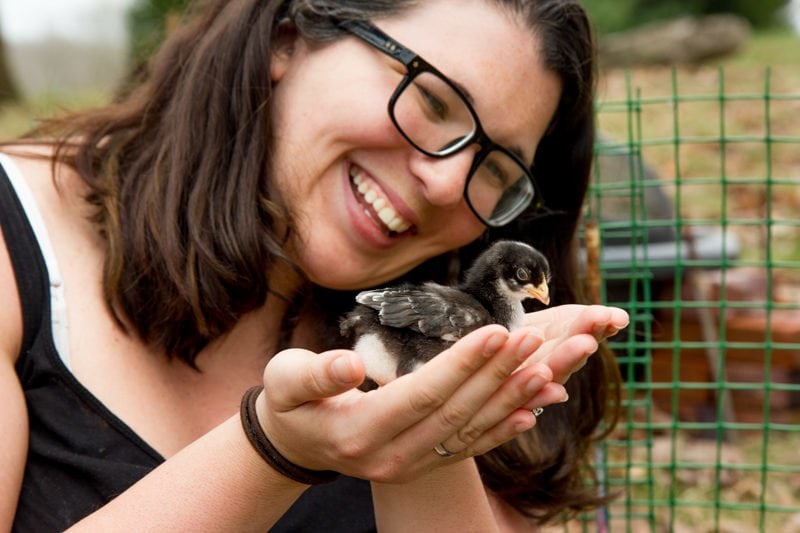 We did things backwards, and we are just now starting to build the ladies a coop. Right now, they are living in a large brooder in our basement (after originally living in a cardboard box for a few days). Craig is working every free second to get the coop done, and I can’t wait to show you the finished product! Right now, I’ll tell you that we are going bigggggg. Everything I read about coops is that you want to go as big as you can. Most people will tell you that becoming a chicken parent is really addictive, so you want space to grow your future obsession. And if you don’t get obsessed, it won’t hurt to give your chickens some more breathing room. 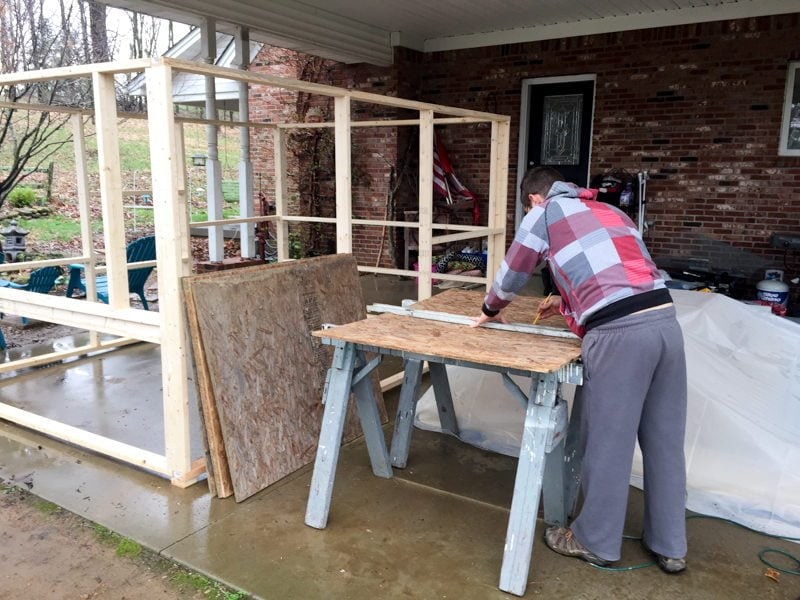 We’re still working on identifying all of our chicks, and it will get much easier as they get older and older. More experienced chicken wranglers, please chime in! We’d love to hear your thoughts on what breeds we have. Here is what we are thinking as of right now: 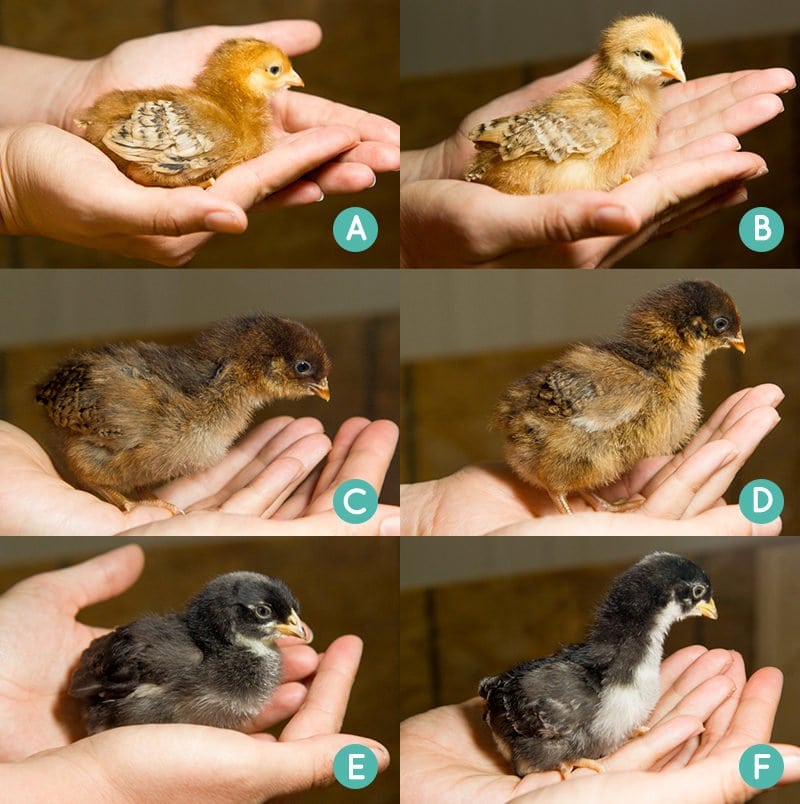 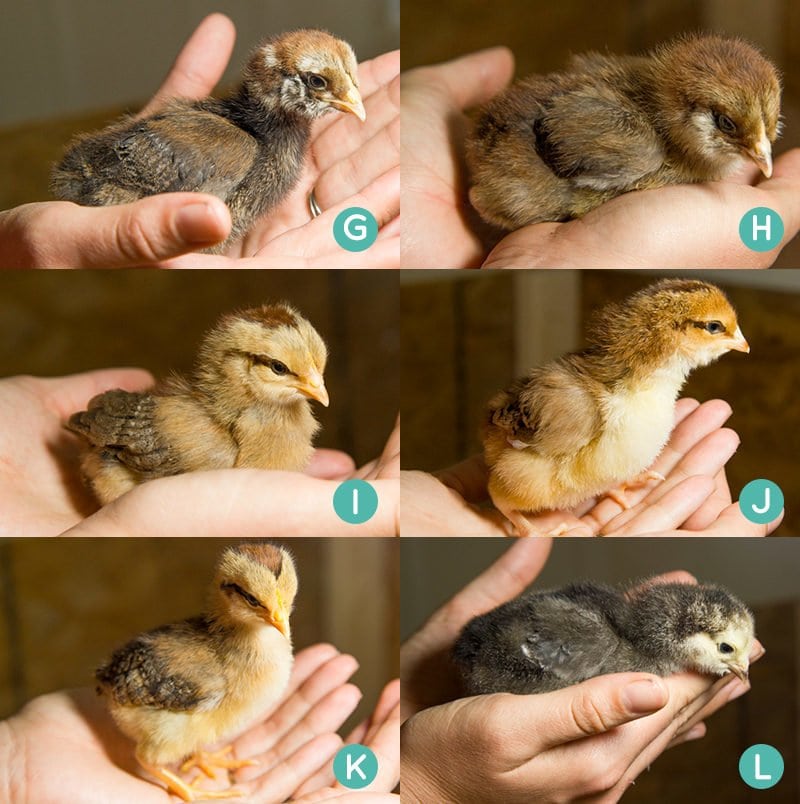 Like I said, it’ll be much easier to identify them once they are a bit older, so I’ll keep you posted!

If you’re wondering how Miss Juniper is taking to the chicks, she is absolutely fascinated by them! We take her down to the basement to visit the brooder a couple of times a day, and she just hangs over the side and stares at them as they run around going about their chicken business. 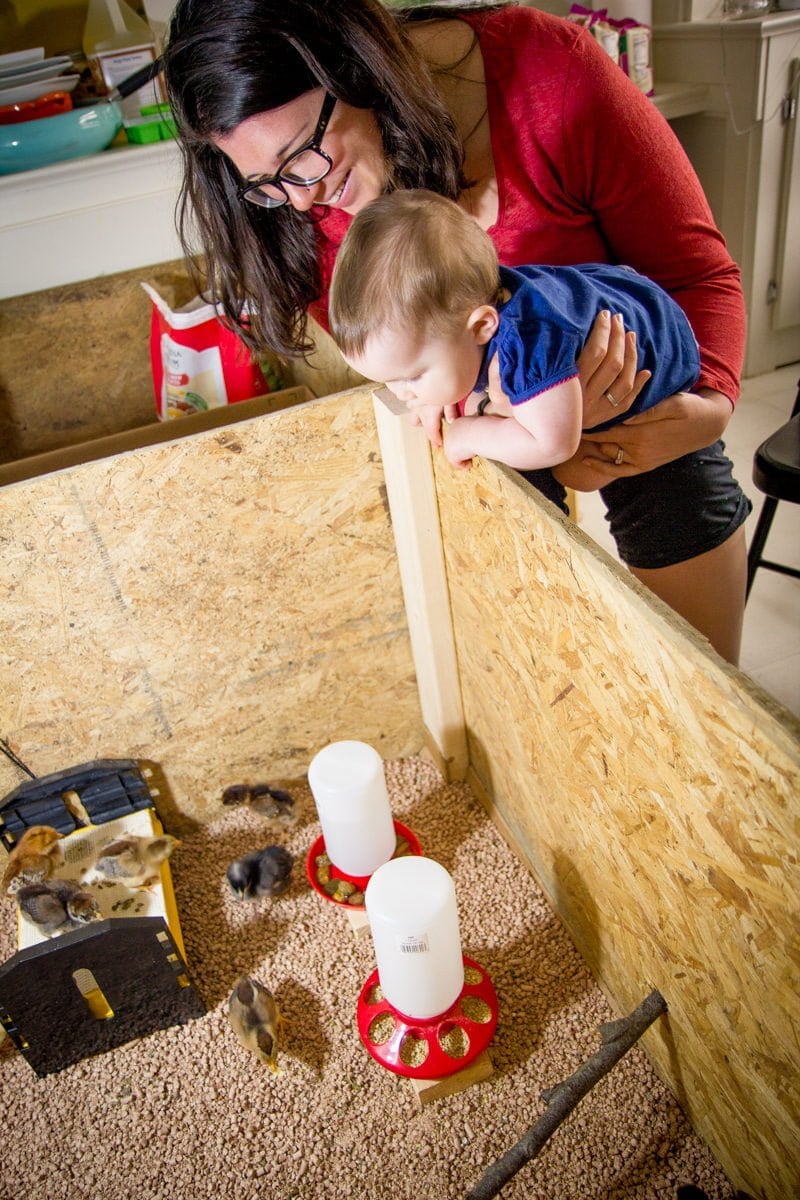 She doesn’t really reach out for them or try to touch them, and she’s still too young to handle them at this tiny, fragile size, but we hope that by exposing her to the chickies and the chickies to her, they will be great friends for years to come!

We’re trying to make sure we handle each chick everyday to get them used to human interaction (it can be a little difficult to keep track, so we pet and snuggle one, and then move it to a second brooder box so we can keep track of who has gotten love and who hasn’t). These are definitely more production birds for us than pets, but it would be nice to have some of them (if not all of them) okay with human contact. I’m sure Juniper would be very happy to have pet chickens as she gets older. 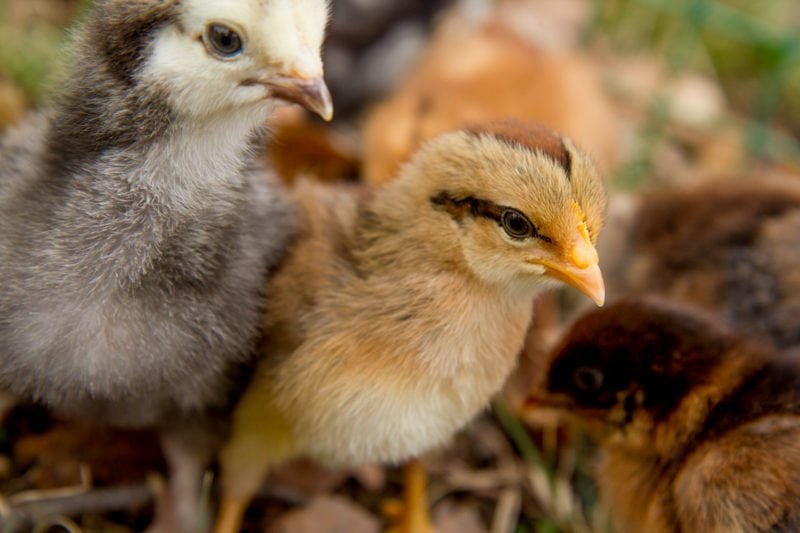 Other than our chick losses in the first two days, it’s been going really well with the chicks! During their first few weeks, you have to keep a close eye on them to make sure they’re settling in well and make sure they don’t have pasty butt (yup, that’s actually what the condition is called). Basically, we’ve been wiping each of our pullets’ bums twice a day to make sure their vent is all clear. It sounds gross, but it really isn’t. Changing a baby’s dirty diaper makes wiping a tiny bit of poo from a chicks bum seem like a walk in the park, in comparison.

The only other hiccup we had was when our power went out during a thunderstorm! We had to pack up the ladies and take them over to my parents’ house (because they have a whole house generator) to make sure they stayed warm during the power outage. Have chicks, will travel. 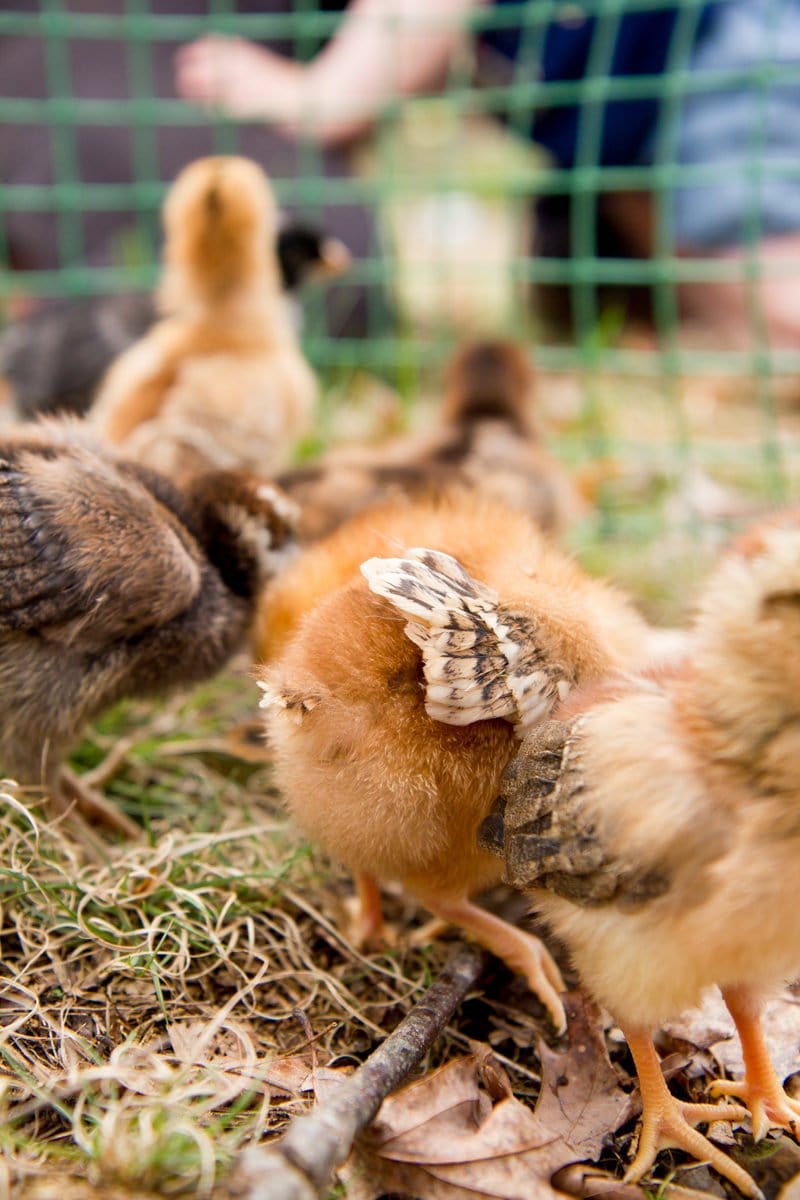 One of the reasons I think our chicks are doing so well is because we sprung for the much-coveted EcoGlow Brooder at the recommendation of my chicken farming friend, Grace. Typically, you use a 250W red light bulb and lamp in a brooder to help keep the chicks warm, but it’s hard to keep the heat consistent with those, which can cause issues with your chicks (including lots more pasty butt issues). 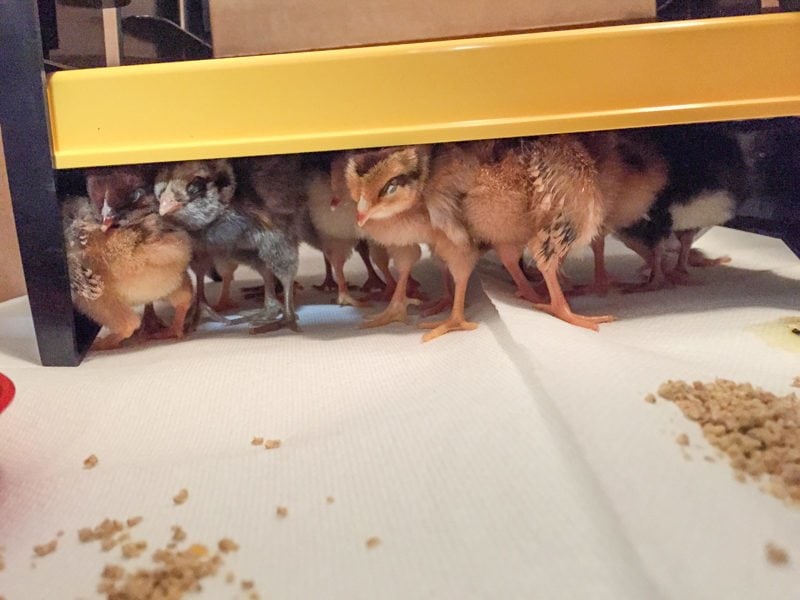 The light is also a huge fire hazard. One Google search will render you thousands of stories of chicken farmers who have had their brooders, coops, barns, and even houses burned to the ground by a lamp that was knocked over by a chick. I knew I wouldn’t be able to sleep at night with the lamp on. The brooder doesn’t get hot to the touch, and is just warm enough to keep the ladies warm. They use it like an electric mother hen! They run under it when they need to warm up, and run out when they want to explore. We love it (and no, I’m not being paid by the company that makes them).

The brooders are a bit expensive, about $80 each, but they are much more energy-efficient and pretty much pay of themselves compared to two of the heat lamps in one go of raising chicks. Totally worth it for my peace of mind! 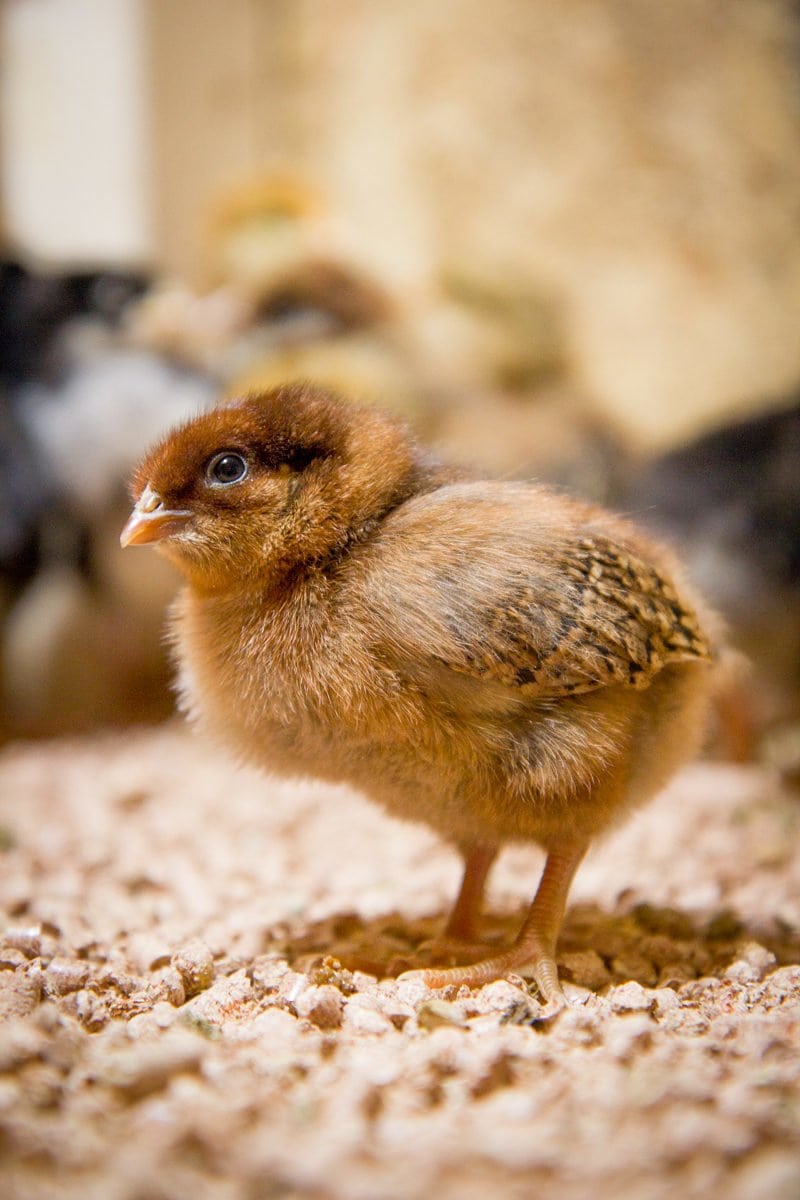 I love that instead of us artificially adjusting the heat in the brooder (by raising or lowering a lamp), the chickens are regulating their own heat. They spent a lot of time under the brooder in the early days, and now, a lot of them sleep on top of it, or just pop under it when they need a little bit of warmth. Eventually, they’ll get to the point where they stop using it, and we’ll know they are ready to head outside.

Alright, enough about the brooder already (seriously, I love it, though). 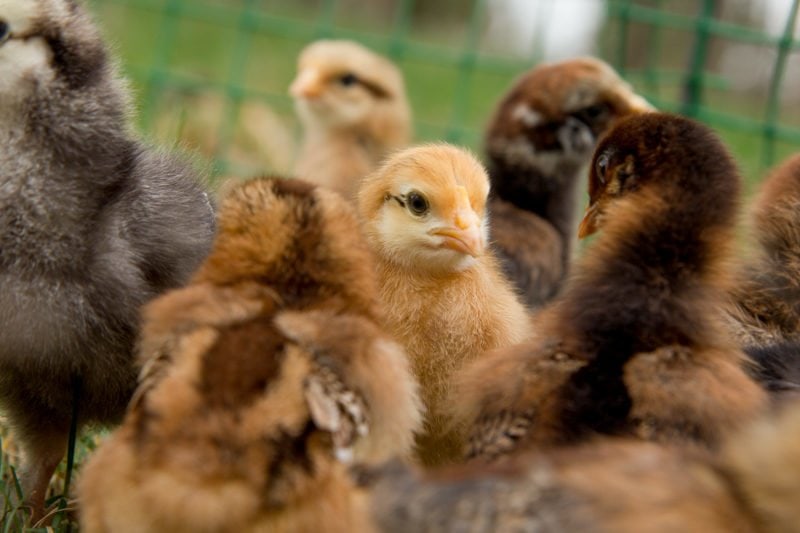 I think that pretty much brings you all up to date on our first 10 days of chicken wrangling.

Where my other chicken wranglers at? Give me all your tips, tricks, and secrets! Teach me. Teach me!