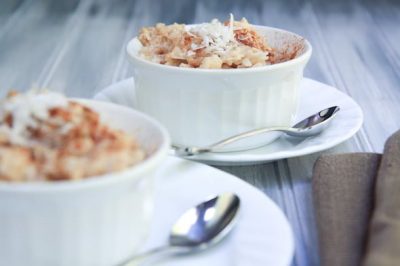 Growing up, rice pudding was relatively frequent dessert in our house, although it was never a planned one. It was always the result of my Dad’s heavy hand when making rice. He’s not much of a measurer, so every time he made us rice, he’d pour a couple of cups of dried rice in the pot and by the end, we’d have a gallon or so of rice. Even though we only needed enough for three or four.

We couldn’t let all that rice go to waste. 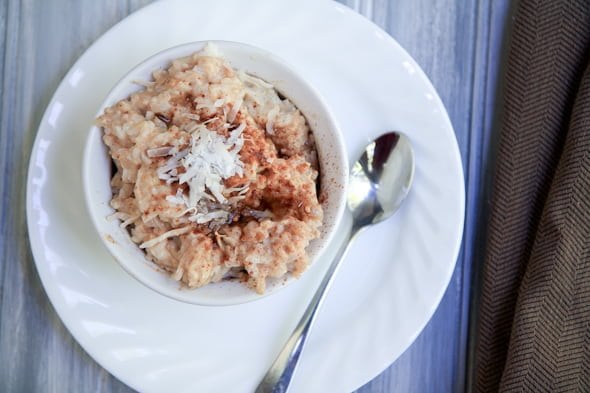 So after dinner, we’d head back to the kitchen and mix the remaining rice with milk, sugar, cinnamon, and vanilla. We’d stuff ourselves silly on the sweet, warm rice. We didn’t always have desserts in the house growing up (my parents mastered the whole healthful moderation thing way before it was hip), so rice pudding nights were a real treat. It was so simple, but that was part of the beauty of it. I guess, technically, we were eating the rice as more of a cereal, but the results were the same—wholesome, sweet and a perfect way to use up an extra boatload of rice. 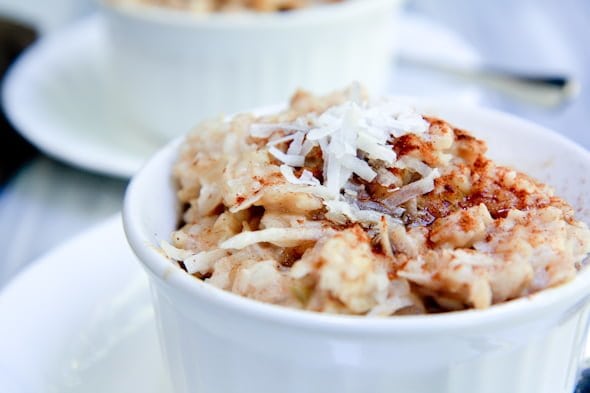 This recipe is a bit different from the one we had growing up. This rice is cooked with the sole-purpose of pudding. Instead of cooking the rice in just the standard water, I added creamy coconut milk and a full cup of flake coconut. And then, once the rice has absorbed all the coconutty yumness, I stirred in a little bit of evaporated milk, some pure maple syrup, and cinnamon. The end result is a creamy, smooth, chewy pudding that reminds me so much of my childhood, it’s ridiculous. 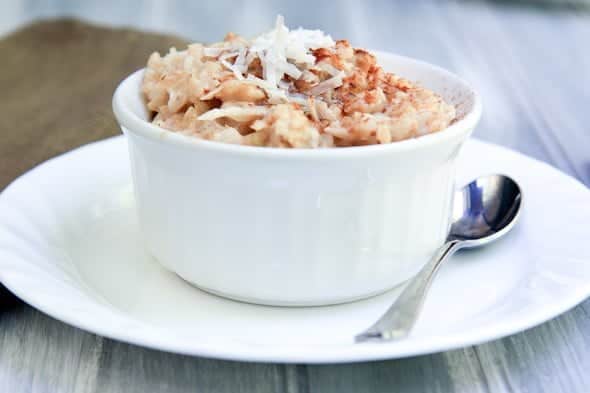 Because this weekend was so chilly and Fall-like, I served this hot out of the pan, but this pudding is equally delicious if it’s allowed to cool. If you can’t decide how you like it, do like I do. Have some hot out of the pan, and then squirrel some away in the back of the fridge to have the next day cold. Just make sure you hide it well enough that none of your family members will sneak in and gobble it up. It’s that good.

Do you have any desserts that you remember from your childhood? What were your sweet staples growing up?