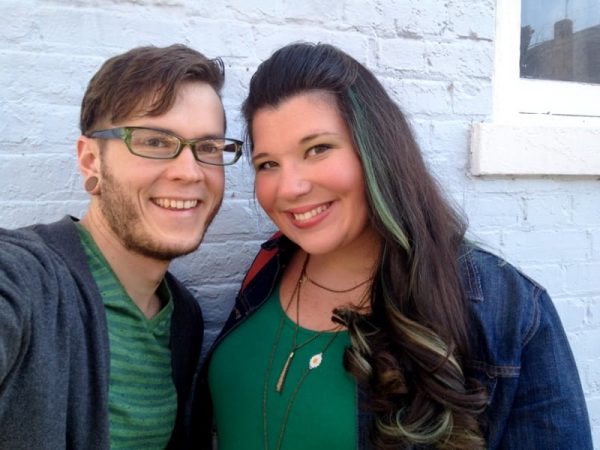 In general, Craig and I are pretty rotten at celebrating holidays, anniversaries, and birthdays. It’s not that we don’t see the value in those days (we do!). But we both really try to celebrate the everyday awesomeness of life, instead of pumping all of our effort into those certain dates on the calendar. Honestly, it’s a nice way to go through life and a marriage.

That being said, it can be nice to get out of our comfort zone every now and again and actually do something special for a special event. Like when we went on a nice beach vacation for our fifth anniversary. And, like I mentioned on Monday, our seventh anniversary was this week—and we took the opportunity to hit up a new-to-us local tapas restaurant. 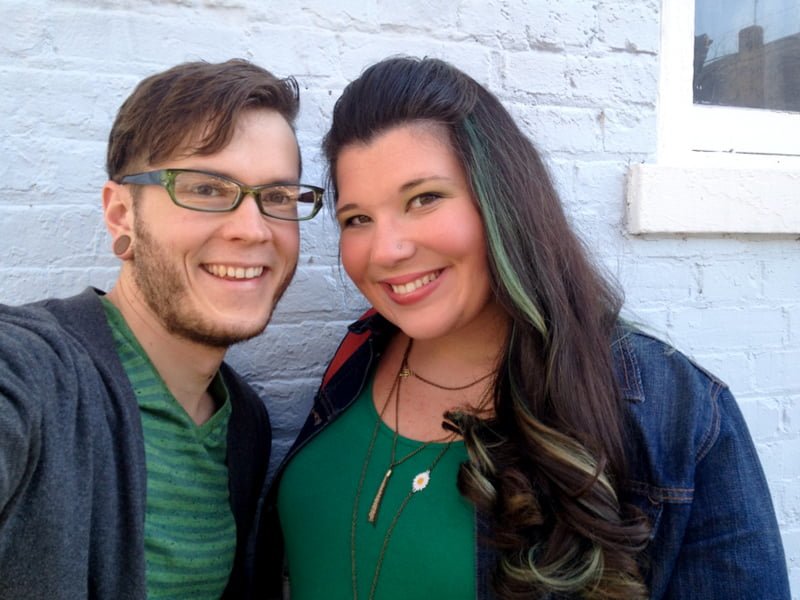 I know that going out to dinner isn’t really a special thing for a lot of folks, but it’s something we very, very rarely do (like, uh, I literally can’t remember the last time we went out to eat before Monday night), so it’s a super special treat for us! Because we rarely go out to eat, we’re super picky about the places we do chose to spend our time and money. And after lots of research, we landed on spending our anniversary dinner at Habana Blues. 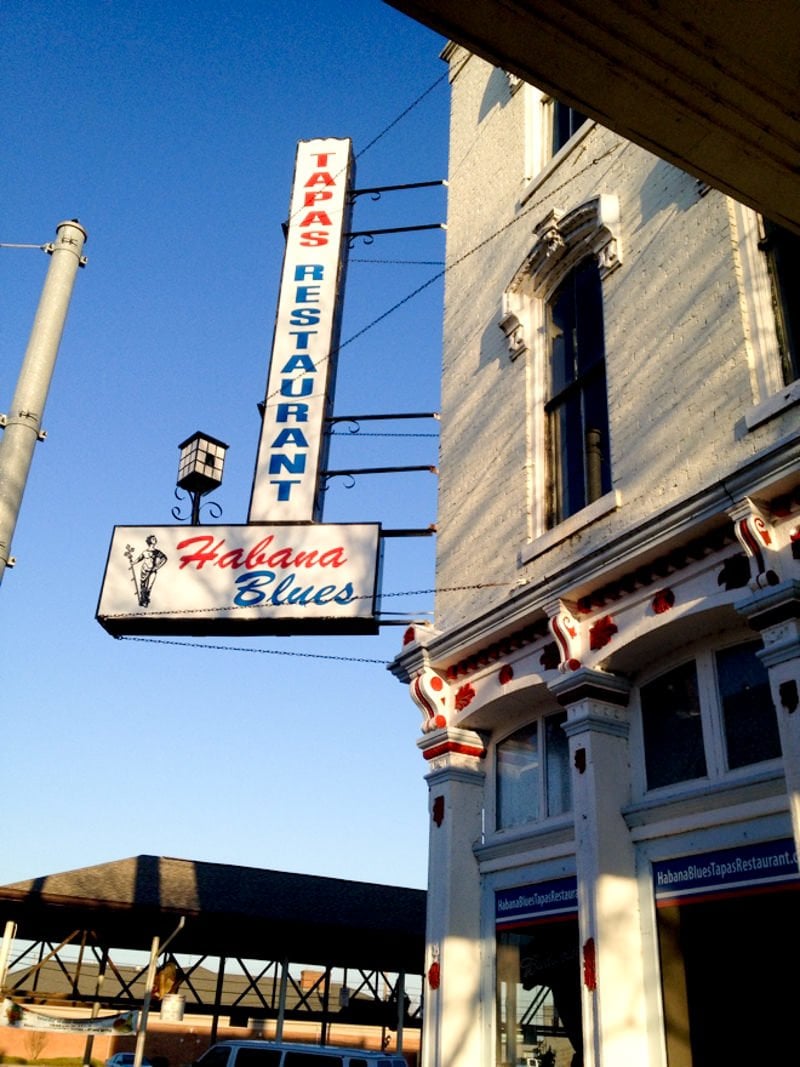 If you think it’s strange that a Cuban tapas restaurant is located in Southern Indiana, you should come hang out here—we’re more than just cornfields! We have such a great selection of awesome cultural restaurants. And in particular, this area (Downtown New Albany) is super hip and amazing. It’s an old downtown, right next to the Ohio River, that has had a renaissance over the past decade or so. It’s now full of incredible little shops, a wide variety of restaurants, a few wineries, a brewery, and one of the better open-air farmers’ markets in the area.

Anyway, Habana Blues came highly recommended, and we figured since it was St. Patrick’s Day, we probably would have our pick of the place since most folks would be hitting up the Irish bars and restaurants in the area, and we were right! We started off with drinks. I ended up with a virgin cucumber mojito, which was insanely delicious. I have to recreate this one at home! 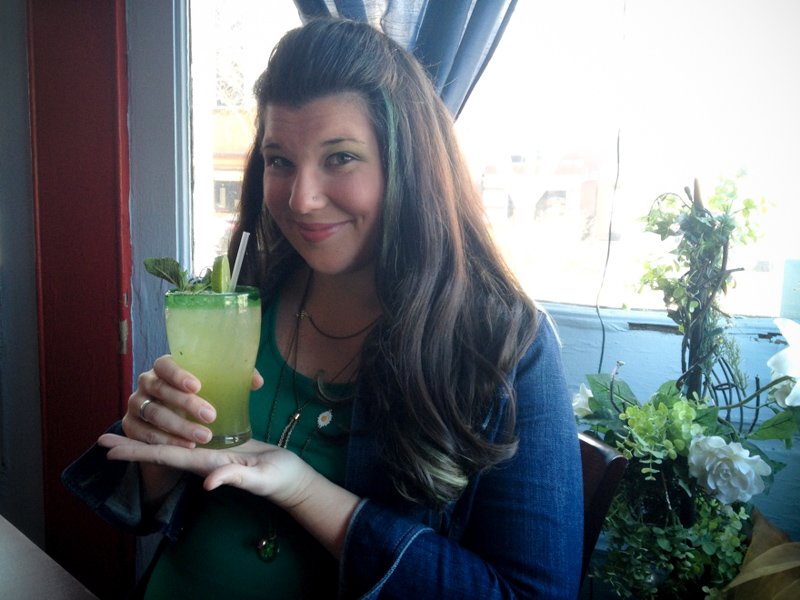 We started perusing the menu and were crazy overwhelmed by all the choices. I love tapas-style dining (and tend to order tapas-style from the appetizer menu even when a restaurant isn’t a tapas restaurant) because I hate having to make the decision to stick with one thing. That’s one of the issues of never going out to eat! When I do, I want to try it all. 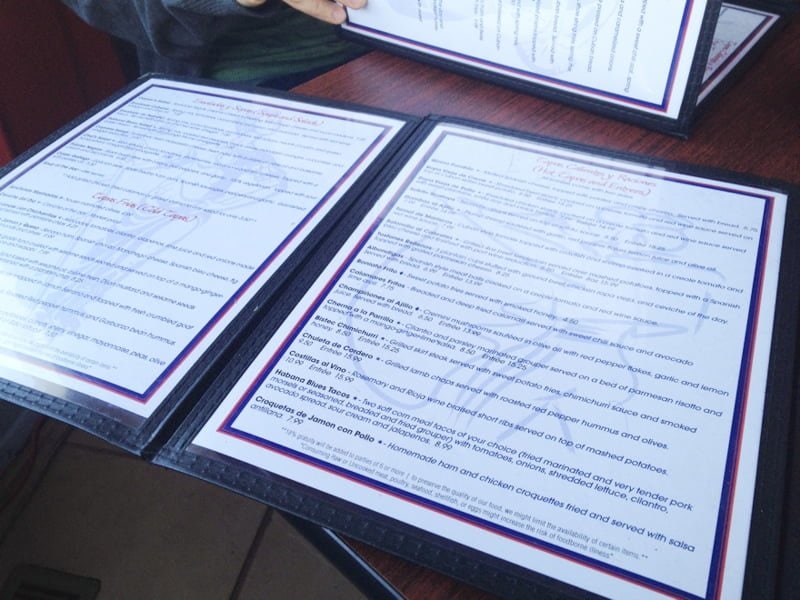 We ended up landing on five dishes. And man, it was so tough to narrow it down to that. We started off with a caprese salad and some fresh guacamole with plantain chips. The caprese salad seems random at a Cuban place, but the dressing wasn’t your typical balsamic drizzle, it was a balsamic reduction that had a bit of spice and some Latin flavor to it. Delicious! I just wish tomatoes were in season, as I’m sure it would have been a million times better in July with some Indiana heirlooms. 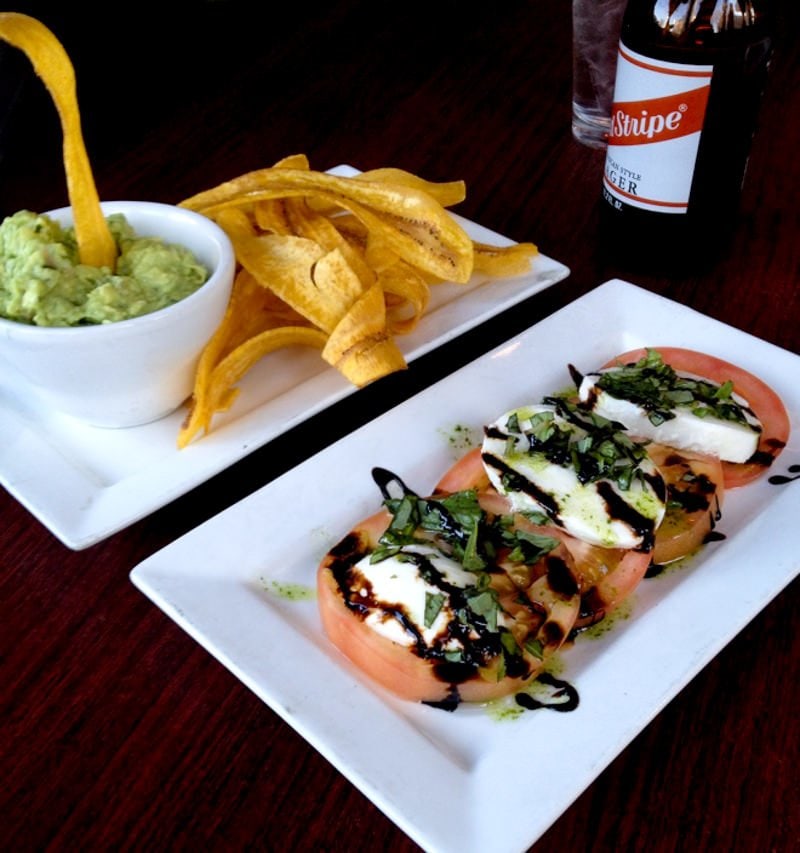 Next up, we had Ropa Vieja de Pollo. It was slow-cooked shredded seasoned chicken on top of beans, rice and skillet sweet potatoes. This reminded me a little bit of cajun food, and it was insanely good! And it was served with two grilled plantains, which added a really incredible sweetness to the dish. 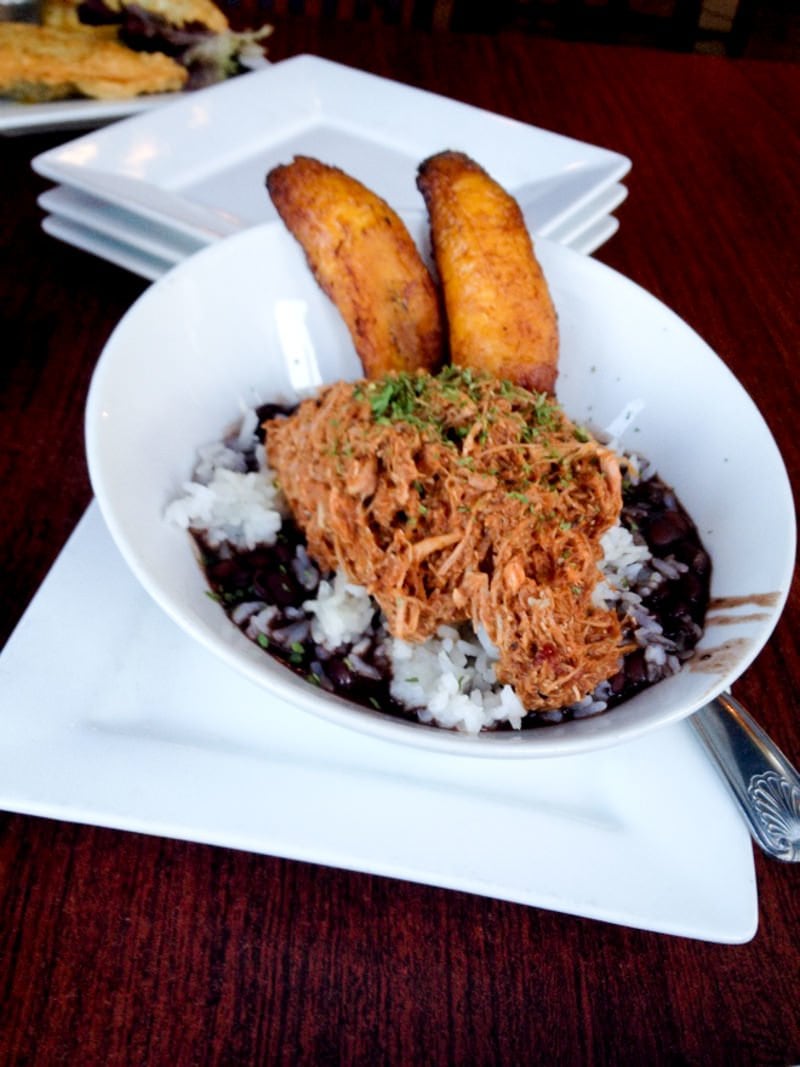 We also got two veggie empanadas. The empanadas were awesome, but the dipping sauce was absolutely killer. It was some sort of spicy, strawberry sour cream-y concoction that I ended up dipping pretty much everything in.

The last of our tapas were two pulled pork tacos. Craig said these were the absolute best tacos he’d ever had. The pork was slow-cooked and absolutely fell apart. And there was a sweet avocado-lime salsa on top, which was a really nice balance to the heaviness of the pork. They were darn good. 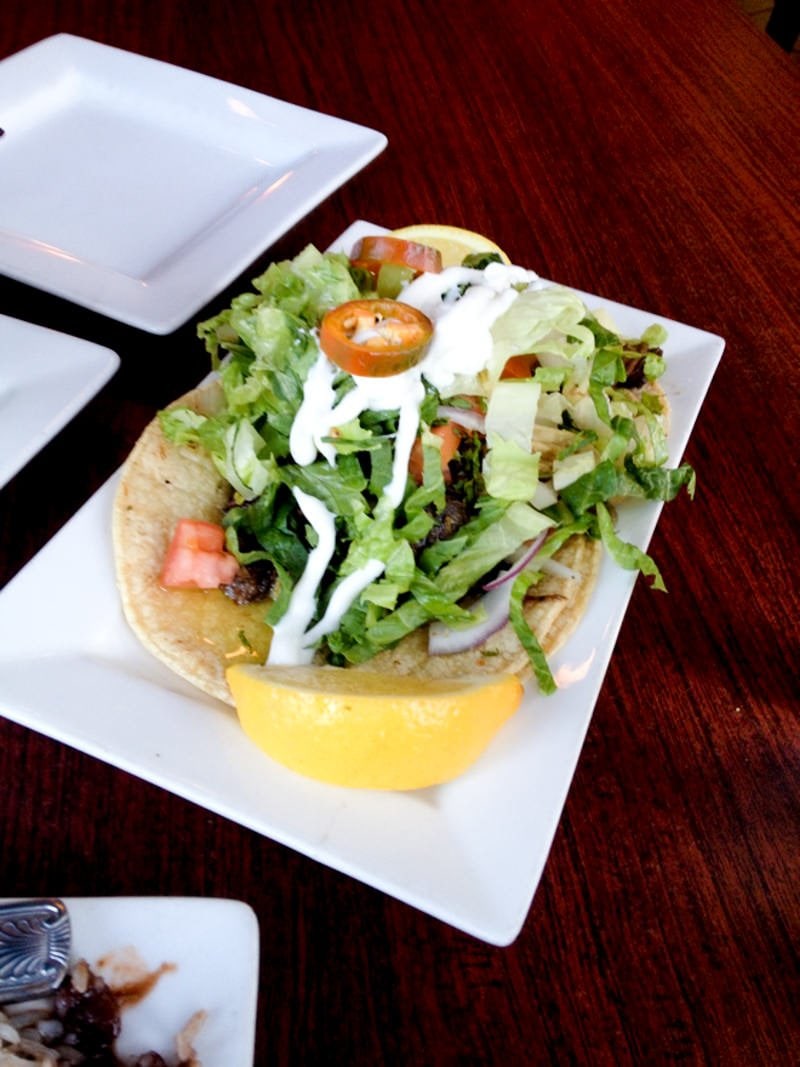 And, of course, it wouldn’t be a proper celebration without some dessert! Craig and I both have a “thing” for key lime pie, and the second we heard they make theirs in house, we knew we were gonna be all over that. I’ve rarely met a key lime pie I didn’t like, but this one was particularly spectacular—it was like a combination of key lime pie and key lime cheesecake. YUM. 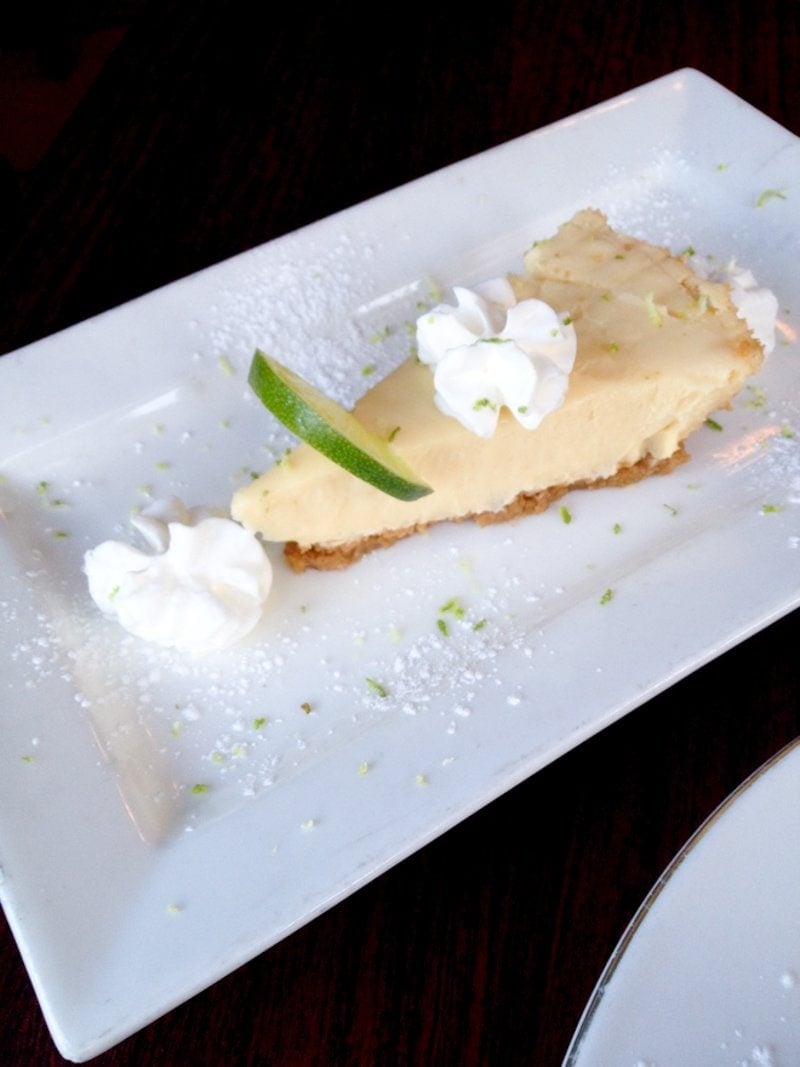 We also got a chocolate tres leches, which was good, but we should have known that compared to our shared love of key lime pie, it didn’t have a chance. 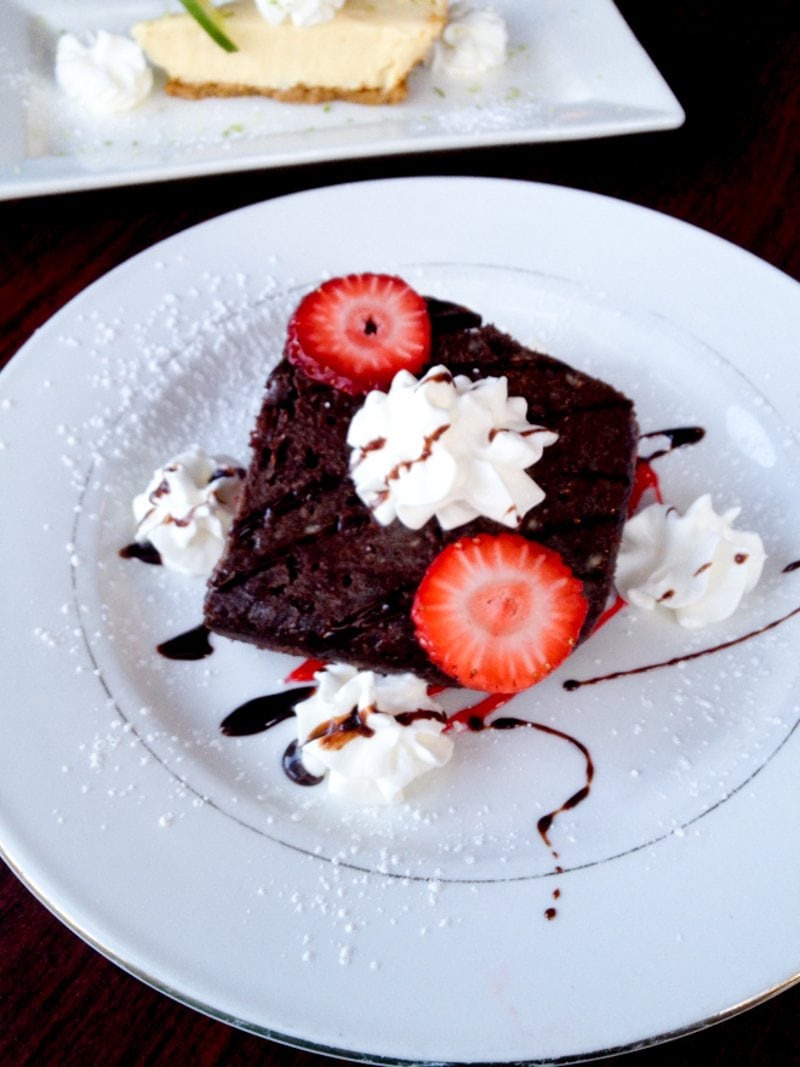 We left dinner absolutely stuffed full. And totally happy. It was a great way to celebrate seven years!

Do you go all out for birthdays, holidays and anniversaries? Or are you a bit more reserved with your celebrations?