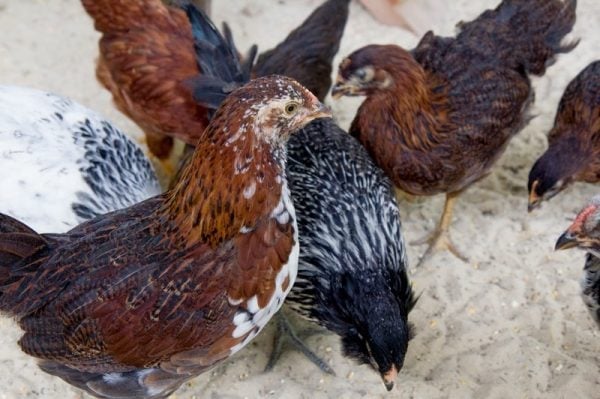 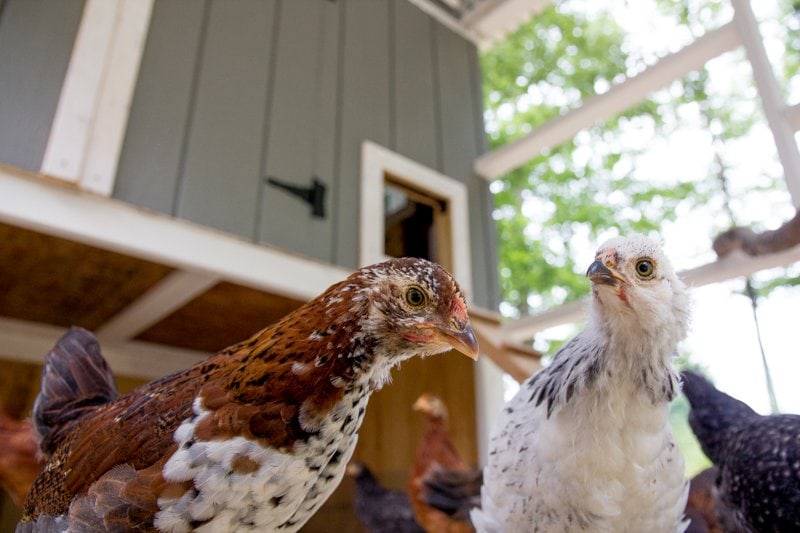 I caught you guys up on the happenings out in our garden last week, and this week, it’s time to update you on our other big Springtime project—the chickens! If you missed it, back in early April, we got a dozen chicks (supposedly all hens, but that ain’t the case, as you’ll learn in a moment) on a whim. We didn’t have a brooder, we didn’t have a coop, but we did have a passion for taking care of our cute little balls of fluff!

Over the past eight weeks, we’ve nurtured and loved our little ladies, and seemingly overnight, they went from little baby chicks, to full-on chickens. They still have a lot of growing to do, but they look a heck of a lot more like chickens now than the last time I talked about them. 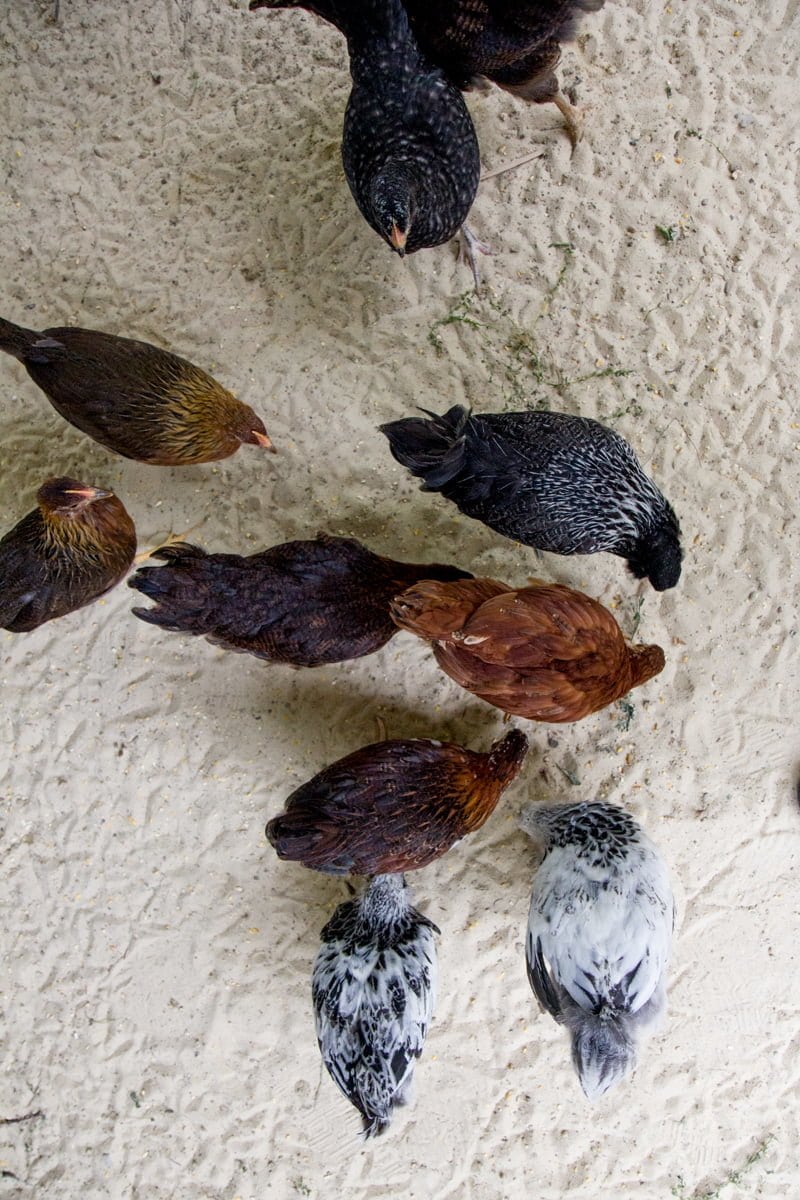 A lot has happened on the chicken front in the last two months (and not just the girls growing). Probably the biggest event was the coop building! We now have a beautiful, mostly complete chicken coop that sits just off of our front porch (our house is now coop adjacent!). We still have a lot of cosmetic things to tweak, but the coop is all secure, sturdy, and livable—in fact, the chickens “moved in” last week! And they seem very happy to have more space to spread out. We made the coop large enough to comfortably hold 15 birds full-time, and even more than that free-ranging (which we plan to do), so our dozen birdies are very comfortable. 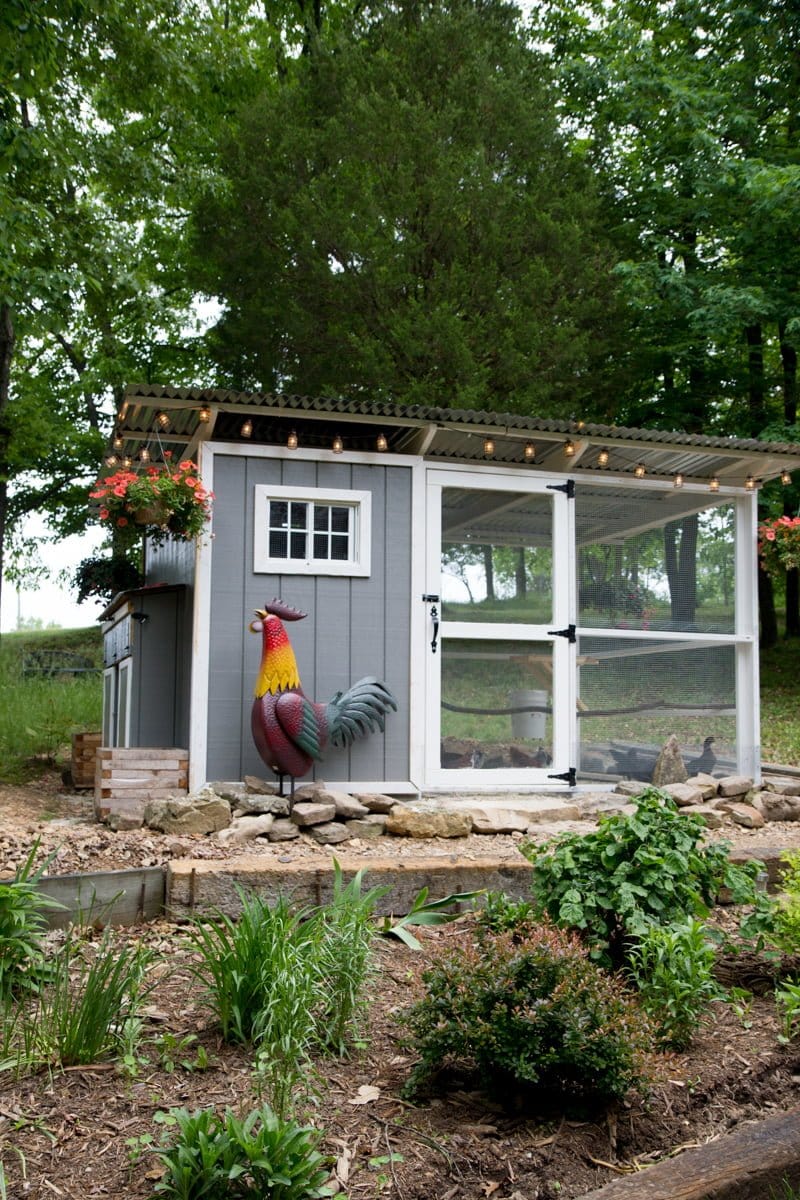 I’m planning on writing a whole big post about building the coop once it’s all finished, but in case you were wondering, we did a modified version of The Garden Coop. The plan was amazing and totally worth the cash we dropped on it. We made a ton of modifications to it (the biggest one being making it about twice the size the original plan calls for), but having the plan was super helpful, and the owner of the company is really helpful if you have any questions. I highly recommend using one of their plans (there are multiple sizes) if you want to build your own coop. 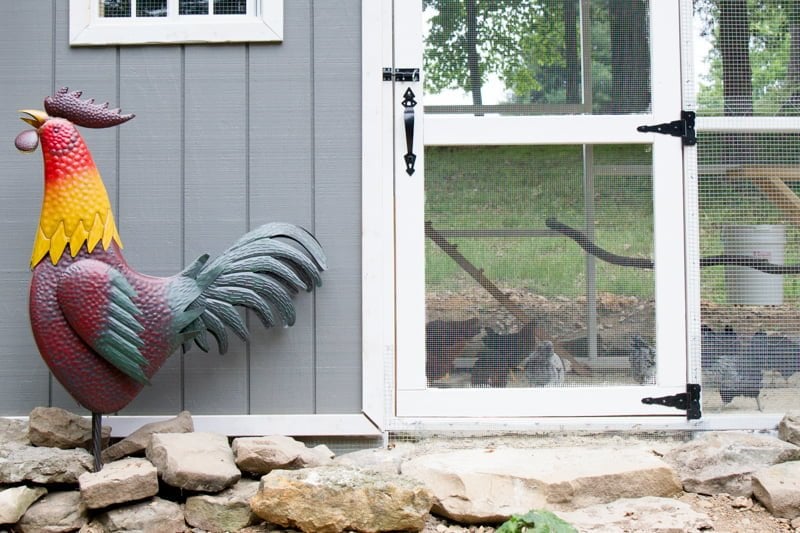 Like I said, the girls moved in last week, and so far, so good. Our plan is to free range them, but we’re keeping them locked in the coop for a few weeks to train them where home is. There are a lot of predators where we live, and we’re doing our best to give them protection while they free range, but it’s good to know that if we end up deciding free ranging isn’t for us, they girls are comfortable living in their coop. 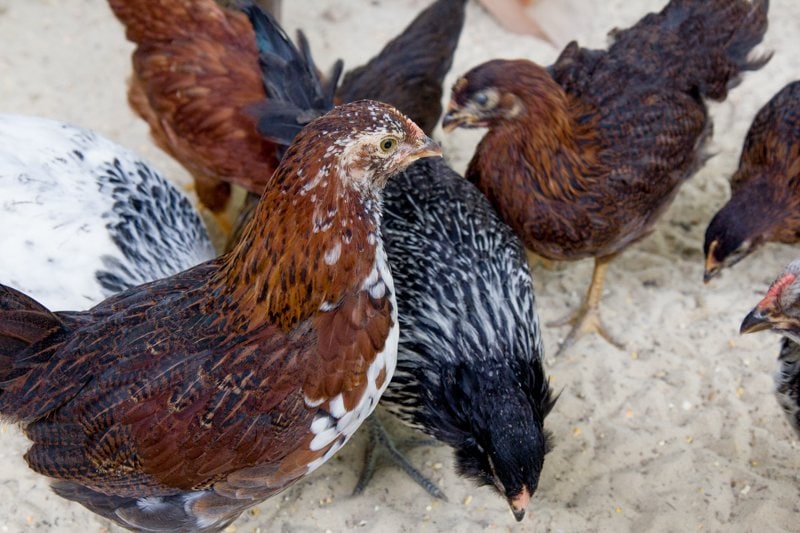 And I know I keep saying “the girls” but that’s not fair, because they aren’t all ladies. We’re positive we have one rooster (his teenage, puberty crowing is hilarious), and think we might have a second one. Roosters are bad news for a lot of people (especially people living in cities that outlaw them), but we’re stoked to have a rooster! Not only will he help protect our flock while they are free ranging, but we’re also excited to have fertilized eggs that we can hatch for future flock additions. And, honestly, I love the fact that we have a rooster crowing every morning. It feels like a real hobby farm now, you know?

I hope we just end up having one rooster, because I’ve heard more than one rooster in a small flock is bad news, but we’ll cross that bridge if/when we come to it. 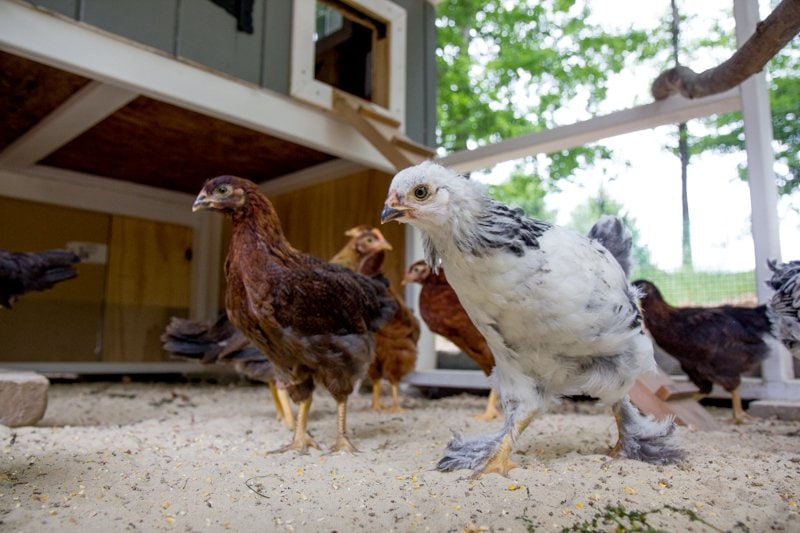 Now that the girls (and guy) are feathering out, we’ve gotten to the point where we’re pretty sure we can positively identify the breeds for most of them. A few of our predictions from the first post were spot on, others, not even close! Ha! Because they are also sporting their feathers, we also felt like we could finally give them names. If you know the name of our dog (Rory) and cat (Sookie) it is probably not a surprise where we got the names of our chickens from. Meet our flock: 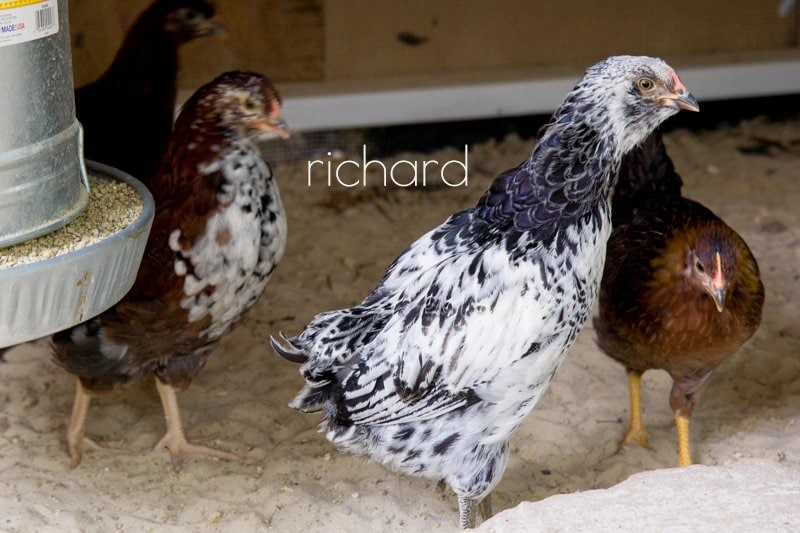 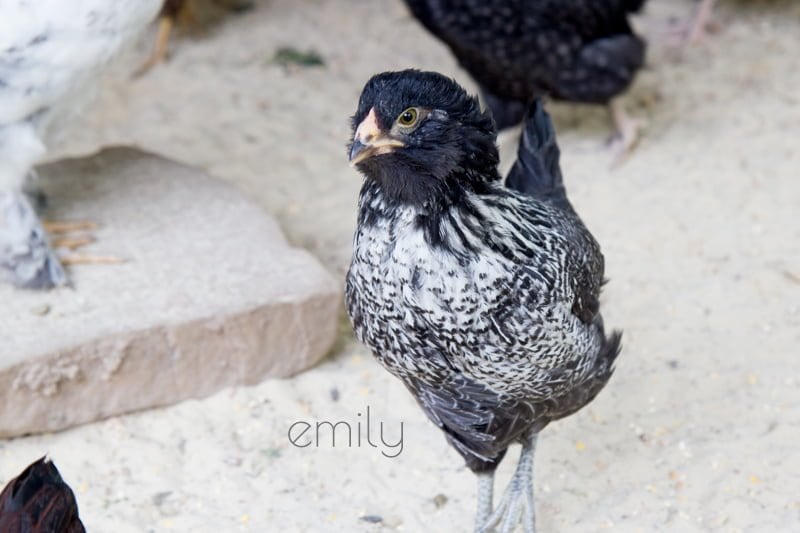 We’ll start off with our pair of Easter Eggers—Richard (the rooster) and Emily. I’m a little bummed that we only have two Easter Eggers (and that only one is a hen), because I was super jazzed to have some kooky colored eggs, but that’s cool! Future generations of hens made from a Richard and another hen should make for some interestingly colored eggs. 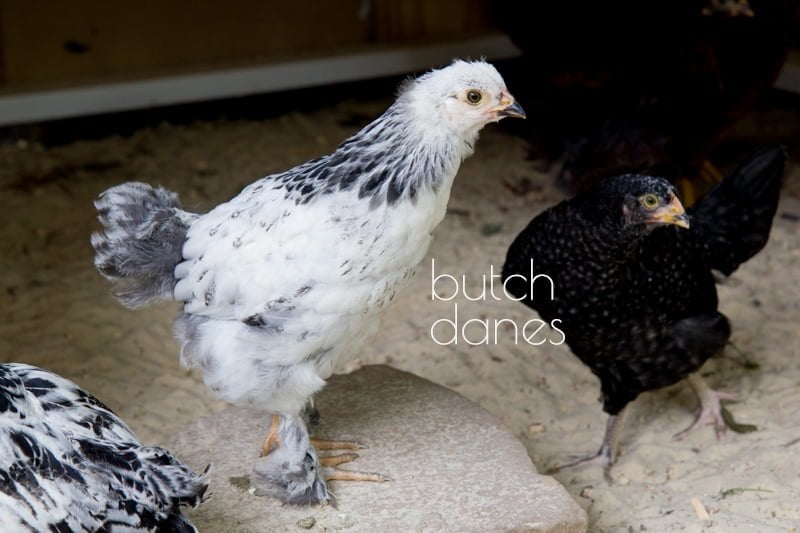 We were 99% sure Butch Danes was a rooster from early on (so much so, he got his name weeks ago), and now, we aren’t so sure. We do know that Butch is a Light Brahma. 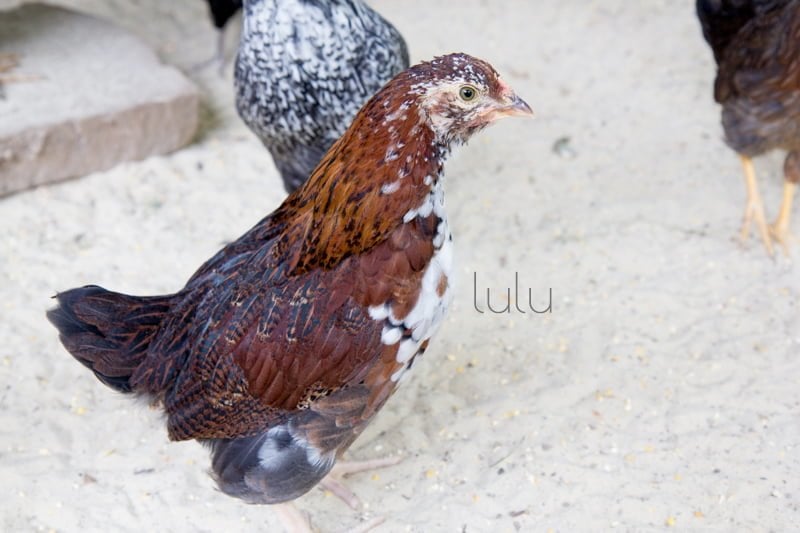 Oh Lulu, you confuse us. You are absolutely beautiful, but we aren’t quite sure what you are. We’re thinking maybe a Speckled Sussex? Or possibly another (not black and white, obviously) Easter Egger? 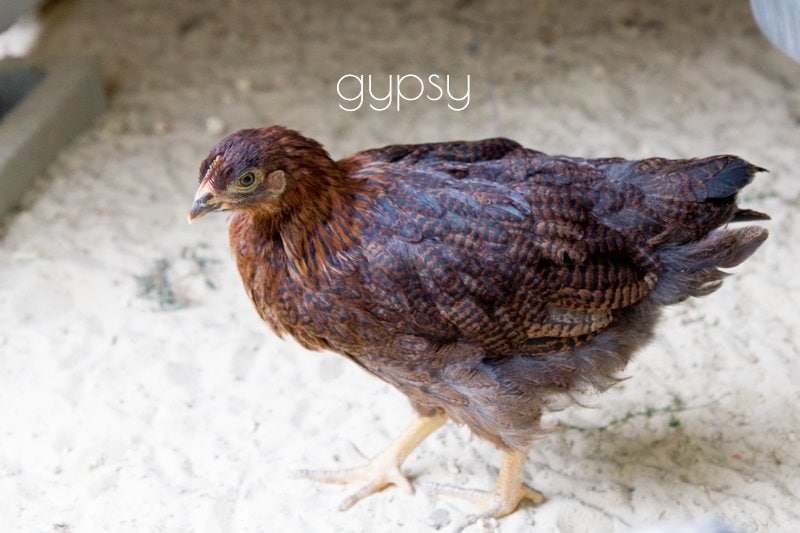 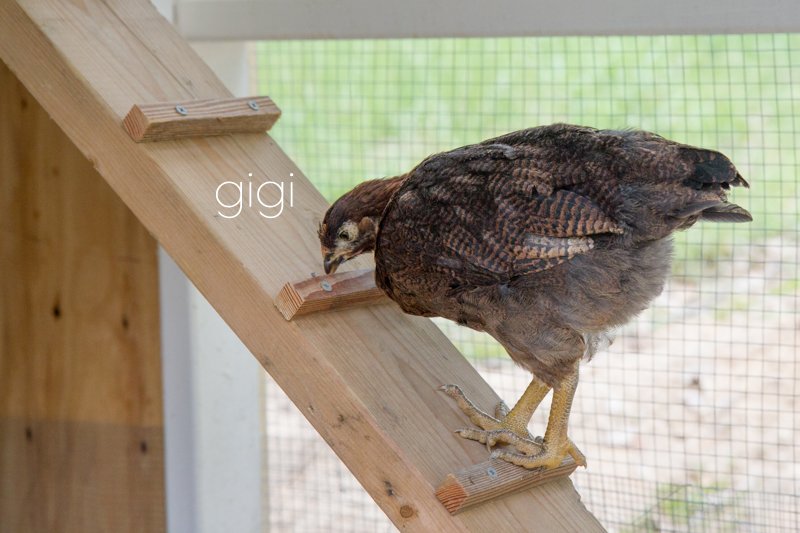 Our two Partridge Rock ladies have the most beautiful auburn feathers! I want my hair to be the color of their feathers. They also have a lot of the same coloring as Lulu. Again, Lulu, you confuse us. 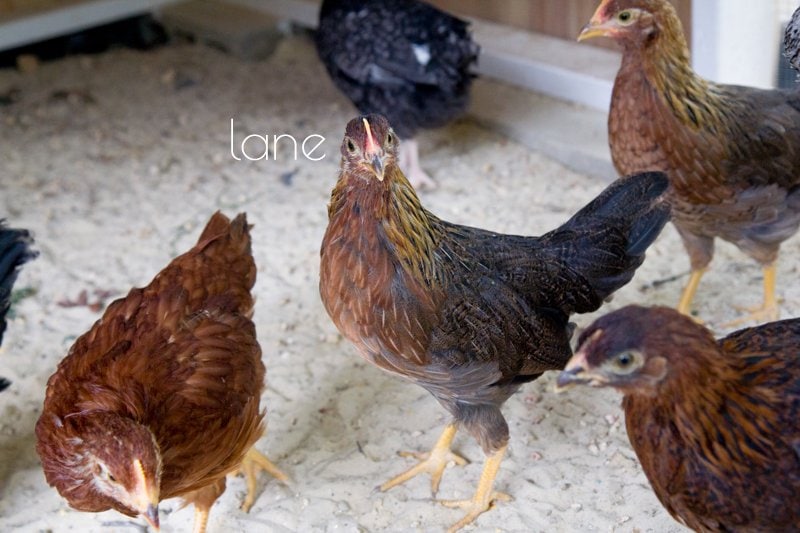 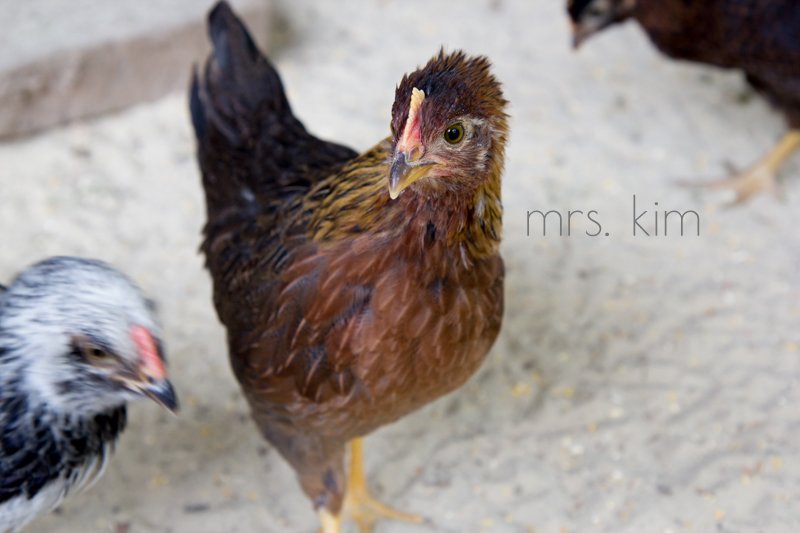 We’re excited that we got two Light Brown Leghorns! They are typically really great white egg producers, and generally pretty problem-free. The one issue with LBLs is that they can be a bit skittish, and we are already seeing that. Lane and Mrs. Kim are so fast! It’s almost impossible to catch them (or get a good picture of them). 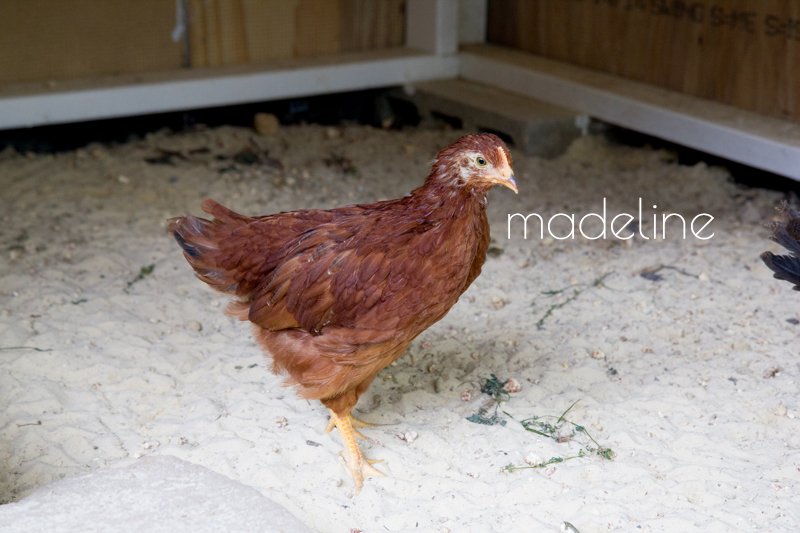 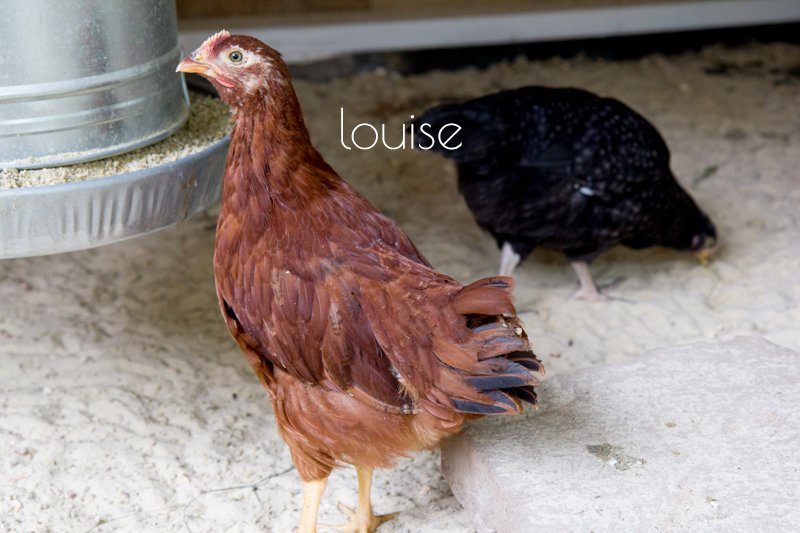 I have a soft spot in my heart for M & L! They are Rhode Island Reds, who are supposed to be excellent brown egg layers. They are super chill and go with the flow (or so it seems to far). 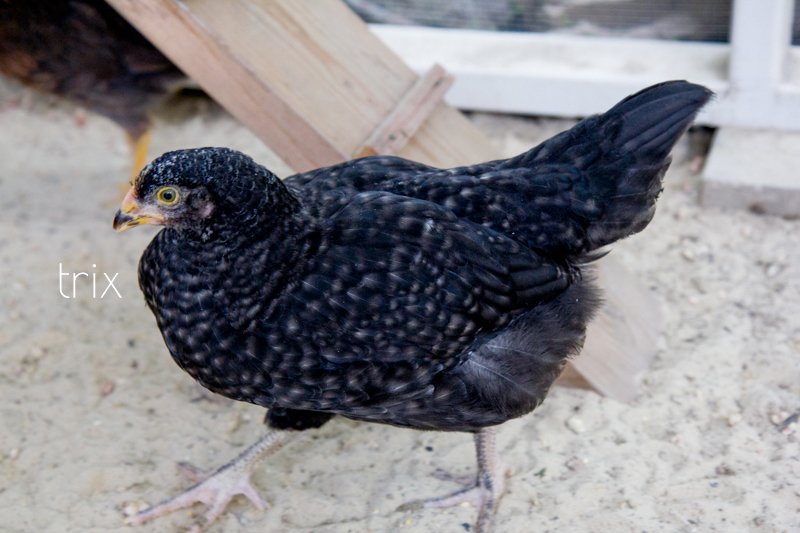 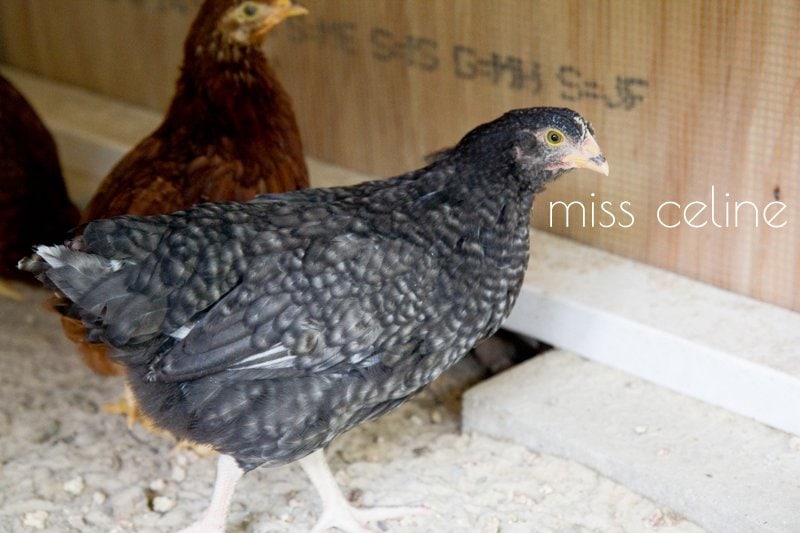 These two ladies have been my favorites from the get-go, and I’m still thinking they are Barred Rocks. Although I’m not as sure I used to be—they aren’t displaying the white feathers as much as I expected, and their eyes don’t really look like Barred Rocks. They might be Cuckoo Marans. Time will tell for these two (and hey, maybe they are two different breeds, even!). They are both pretty shy (especially Miss Celine), they like to hide under the hen-house.

That’s our flock! Aren’t they beautiful? I love them all so much. 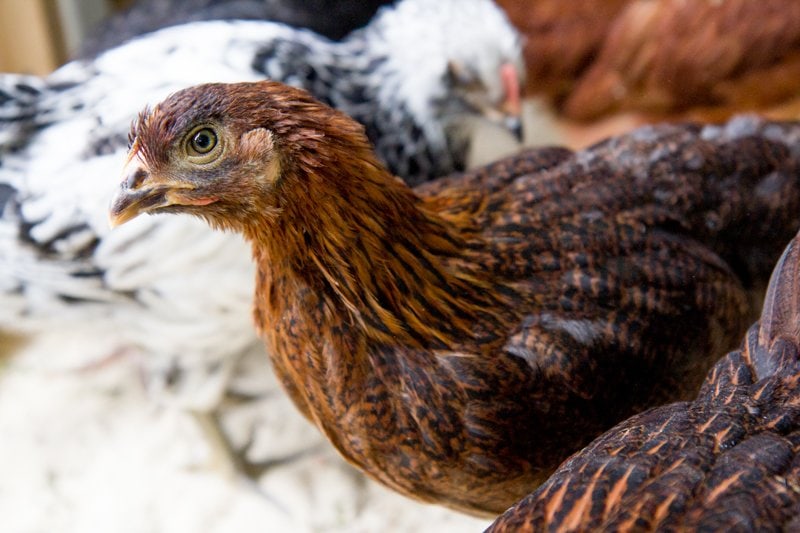 Next up for the chickens will be letting them out into the big, bad world to explore. And then, we wait for the day we see an egg! We won’t see eggs until late Summer or early Fall, so now we play the waiting game. That’s alright, they are super fun and entertaining even without the eggs. Chickens are seriously hilarious! Chicken TV is so fun to watch.

They are getting so friendly now that we can get out there any walk in the coop to visit them. Lulu, Butch Danes, and Richard are particularly interested in us. Lulu loves to peck at my flip-flops, and Richard is a big fan of pecking at my shiny wedding ring. And they all love eating treats out of our hands—a great way to get them more comfortable with us. 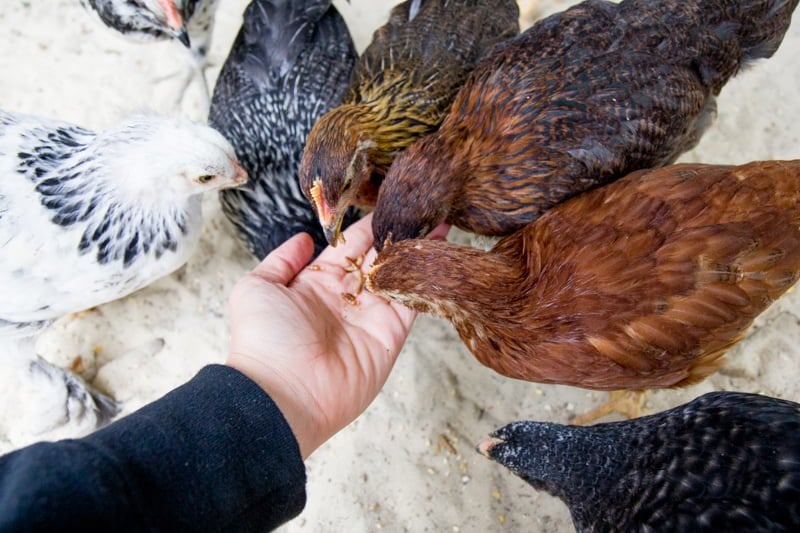 We’re a touch concerned about introducing the chickens to our dog. We’ve been trying to get her used to them from a far, but we’re not 100% sure she’s ready to be let loose while the chickens free range. We’ll be carefully increasing their supervised visits together, until hopefully, they can become friends. Or at least co-exist peacefully.

Our puppy has had a lot of changes over the past few years (a move, a new cat, a baby), and we don’t want to rock her world too hard by forcing her to co-mingle with a dozen birds, too. She’s done great with all the changes, but we want to be respectful of her needs, too. We’ll take it slow, and, hopefully we’ll have a livestock guardian dog by the time it’s all said and done. 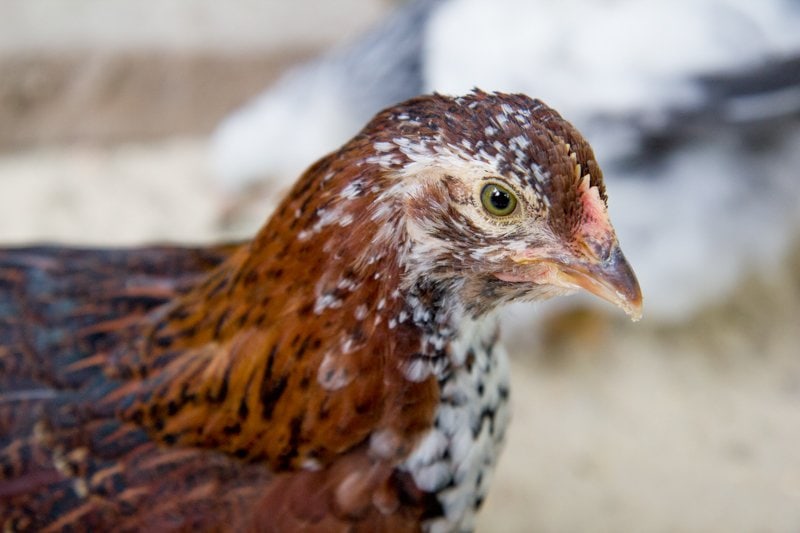 I think that brings you up to date on the chicken goingson. I’ll start working on a post that talks all about the coop and our other chicken-y logistics (our waterer, feeder, etc.), so feel free to chime in and ask any questions you want to see answered in that post. Cluck, cluck!