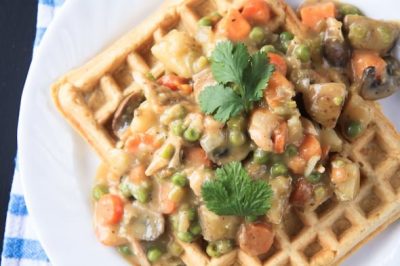 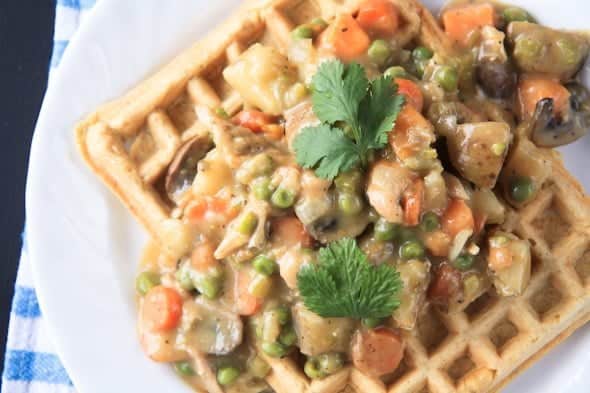 When I told Babyface that we were having chicken and waffles for dinner on Saturday, he turned to me and said, “Wait. That’s a real thing? Like with real waffles?” Canada and the States have a lot of cultural similarities, but chicken and waffles are a concept uniquely American. But once he took a bite, my favorite Canadian was happy to be turned onto this American dish. It was love at first creamy, flavorful bite.

There are a few different variations on the chicken and waffles theme. Most typically, when you hear someone talk about “chicken and waffles” they mean fried chicken and waffles, which I’ve never actually had, but as with all things fried chicken, I’m assuming it’s delicious. There is also a lesser known version that pairs the waffle with a creamy, chicken gravy. The crispy, fluffy waffle is an amazing partner to the smooth, creamy gravy.

Oh, and you veggies, out there, don’t fear! This sucker could very easily made into a vegetarian dish. Just use veggie broth instead of chicken and leave out the chopped chicken. The flavor will be nearly identical, but you’ll have to come up with a new name for it, obviously.

Have you ever had chicken and waffles before (either version)?