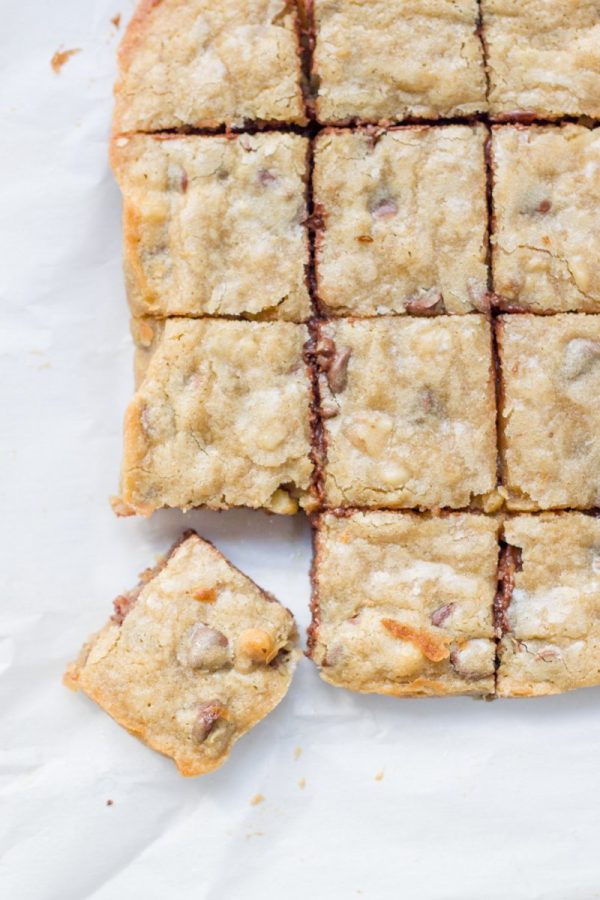 Recipe At-A-Glance
...
DessertReady in 25 min
Inspired by the classic Kentucky Derby dessert, these Bourbon Chocolate Chip Blondies are rich, decadent, and flavorful without any of the fuss or muss of a Derby Pie!
Jump Directly to Recipe

When my husband first moved to the States, he asked me if it was weird growing up in a place that was so close to two of the biggest sporting events in the world (the Kentucky Derby and Indianapolis 500). It honestly never occurred to me that it was weird!

Truthfully, I don’t think I knew they were a big deal to anyone else outside our area. I had no idea that they were national (and international) events. To me, it was just the way the month of May was every year—we did Derby stuff at the beginning and 500 stuff at the end.

Now that I think about it,  I guess it is a bit weird that our month of May is packed with celebrations around these two huge sporting events. We’re lucky to have two of the world’s biggest events right in our own backyard! 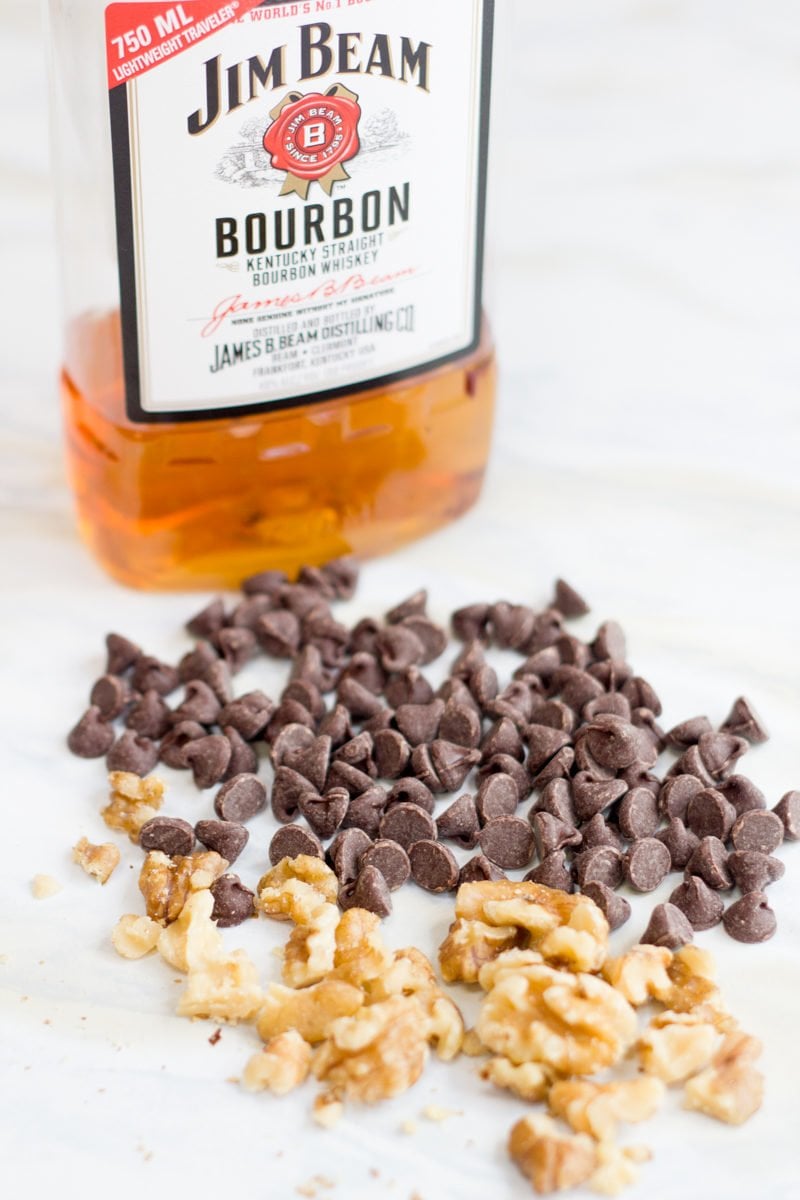 The Derby has never really been my thing (I’ve never been to the race itself), but even so, the events surrounding it and the cultural parts of it were a huge part of my childhood and continue to be part of my life. I place my $2 bet on the gray horse (always the gray horse), drink a mint julep, and happily eat big, rich slices of my family’s not-quite-derby-pie—a Chocolate Bourbon Pecan Pie that is absolutely to die for. It’s been served at every one of my family gatherings for as long as I can remember! The recipe has been passed down for generations in my Louisville-based family.

The recipe for Derby Pie® is a family secret created by the Kern family in 1954, and sold throughout the area (particularly during Kentucky Derby season). It’s also a registered trademark of Kern’s Kitchen in Louisville Kentucky. This regional classic is a chocolate-walnut pie, and contrary to popular belief, there’s no bourbon in it. So our chocolate bourbon pecan pie has a similar flavor profile but is definitely not the same!

But enough about pie. This year, I’ll be toasting Derby Day with these bourbon chocolate chip blondies. And then I’ll sing a happy cheer when the race is over, because it officially means it’s time for Indianapolis 500 practice to start (and Mama loves her some fast race cars). 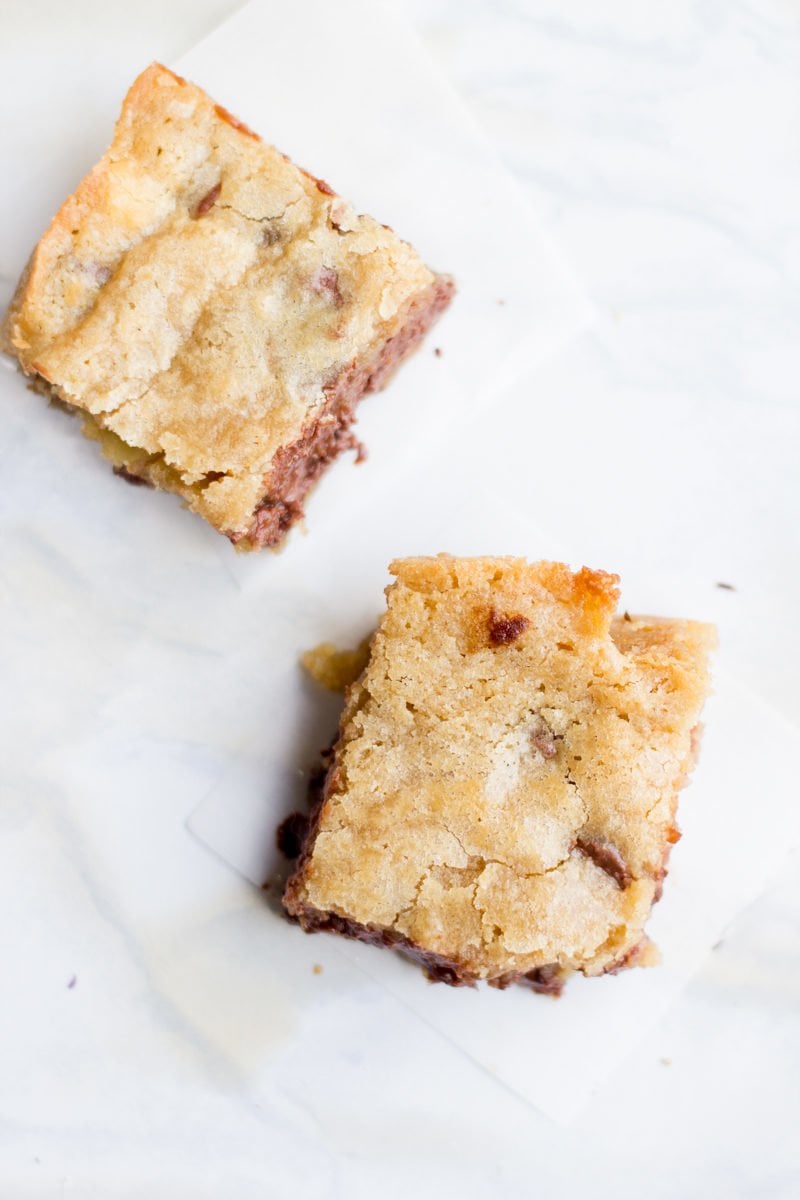 I’m on a huge blondie kick right now—especially if you add chocolate chips to them. They are like if you took the best chocolate chip cookie dough you ever had taste-wise, and combined it with the fudgiest brownie you’ve ever eaten texture-wise. I actually think I’m going to ask for a plate of bourbon chocolate chip blondies with some candles it in (32, to be exact) for my birthday “cake” this June. That’s how much I am in love with blondies.

One of the things that makes me love them so much is how incredibly easy they are to whip up. I can literally have a pan of blondies in the oven in less than five minutes. And that includes some very important bowl licking time. They are so fast! And they aren’t fussy at all. You can’t mess these up, I promise. 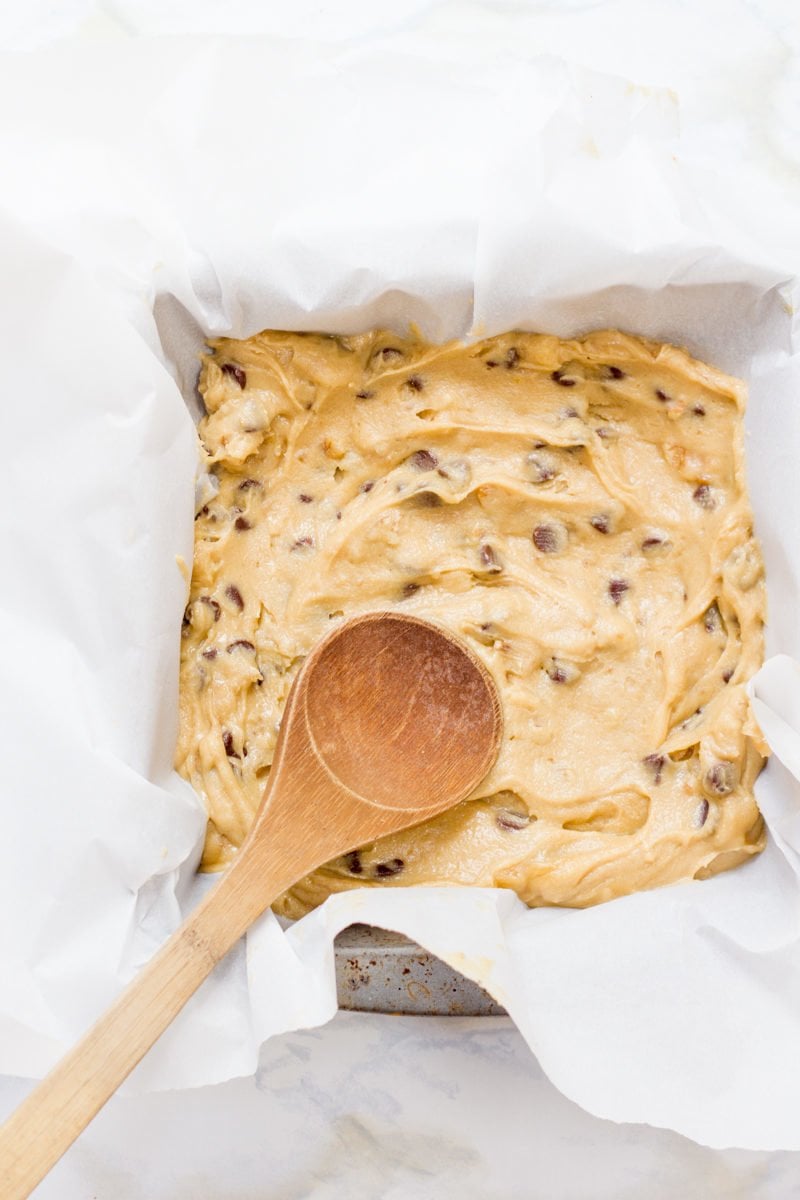 Because these are Derby-inspired, I added bourbon, chocolate chips and walnuts, but you can leave these blondies au natural, too, and they are deliciously simple. You could also play with what mix-ins make you happy—butterscotch chips, peanut butter chips, other nuts, dried fruit, pretzels, whatever!

Oh, and a word about the bourbon I used here before I get flamed by a Kentucky bourbon snob out there. We have two bottles of bourbon in our house at all times, one for drinking and one for cooking. If you want to use your $70 bottle of bourbon to cook with, be my guest, but I’m perfectly happy with using my bottom shelf bourbon for blondies, and saving my top shelf stuff for sipping and cocktail-making.

If you are making these blondies for a crowd (maybe for your Derby party this weekend?), I recommend slicing them into very small squares—1-2″ square. These suckers are rich as all get out, and you really don’t need more than that unless you are looking for a major sugar crash later on. Also, if you are doubling the recipe, instead of baking it in a rectangle baking dish, split the batter between two square dishes and bake them separately. If you try to pile it all into one large dish, the edge pieces will be done way before the middle is—and you’ll end up with half crunchy blondies and half blondies that are so gooey you can’t even pick them up. Two pans it the way to go.

My vote is always to err on the side of underbaking blondies (and brownies and cookies)—so keep a close eye on them as the cooking time nears. The blondies will solidify a lot as they cool, so just as long as they seem a little solid, you'll be good.