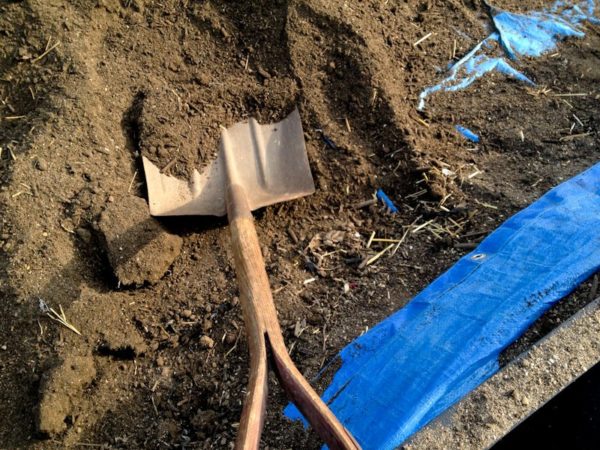 Happy Monday, friends! I hope you all had the most excellent of weekends. Craig had a rare full weekend off, so we made sure to make the most of it.

The weather was calling for off-and-on rain all day Saturday, but we decided to chance it and just head outside early in the morning and get to working before the rain started. We slammed a couple of smoothies for breakfast, slapped on our work clothes and were out in the garden before 9 am. I met up with Mr. Shovel, who is very quickly becoming one of my most frequent companions. I don’t think I’ve shoveled nearly as much in my entire life as I have in the past few weeks. 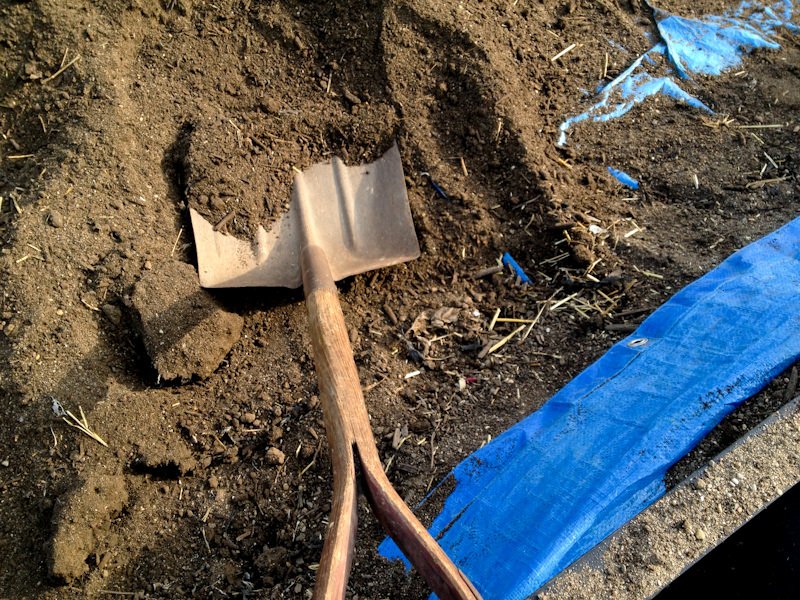 Our first goal was to fill in some of our raised beds with topsoil, which meant, you guessed it, shoveling. Lots of shoveling. Puppyface supervised. 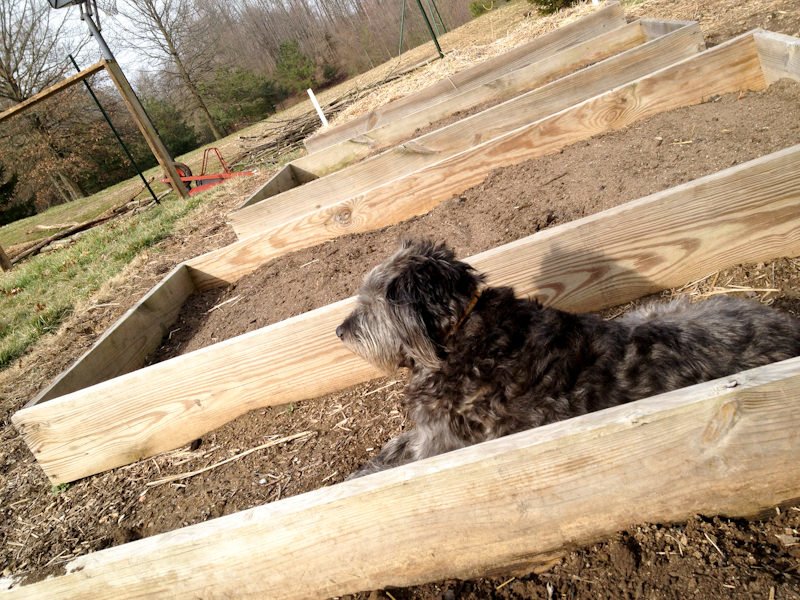 Once the raised beds were filled up, I took to taming our wild grapevines with the pruning shears. 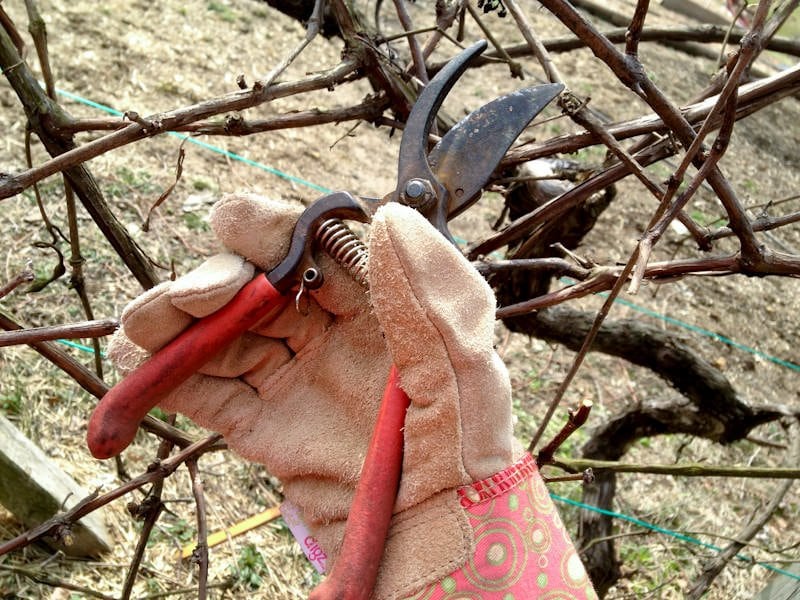 The vines produce super well each year, and this year, we’d really love to put the grapes to good use. I had to keep reminding myself of all the delicious jams and jellies and (maybe even) wines we’d be consuming, because man, trimming grapevines is one annoying, tedious job. There be lots of vines in these here grapevines. 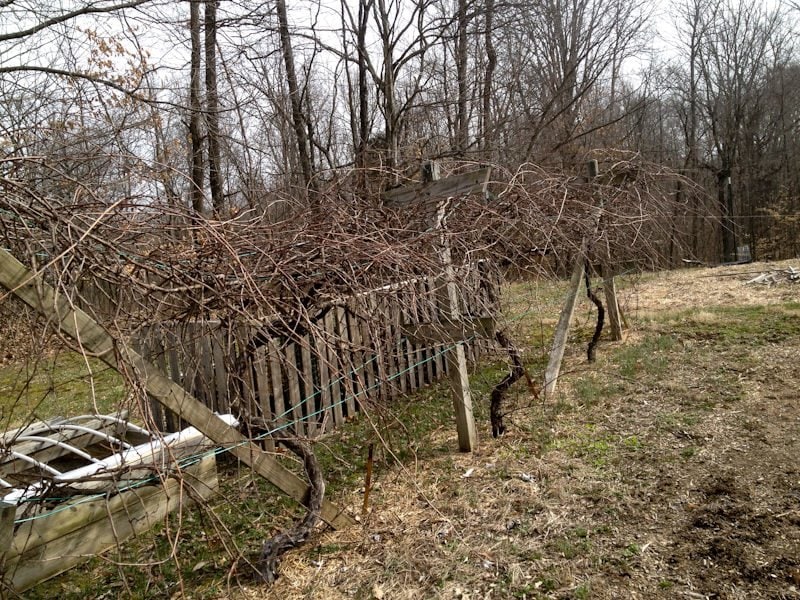 While I was tackling the grapes, Craig was spending some time working with our cold frame. I’d filled it up with top soil (more shoveling) and planted some seeds in it on Friday, but we had some cold weather coming in and we still had to figure out the covering to keep the plants all warm and toasty. After some stapling, nailing and rolling, Craig had fashioned a nice little cover to help our cold-weather crops start producing early. 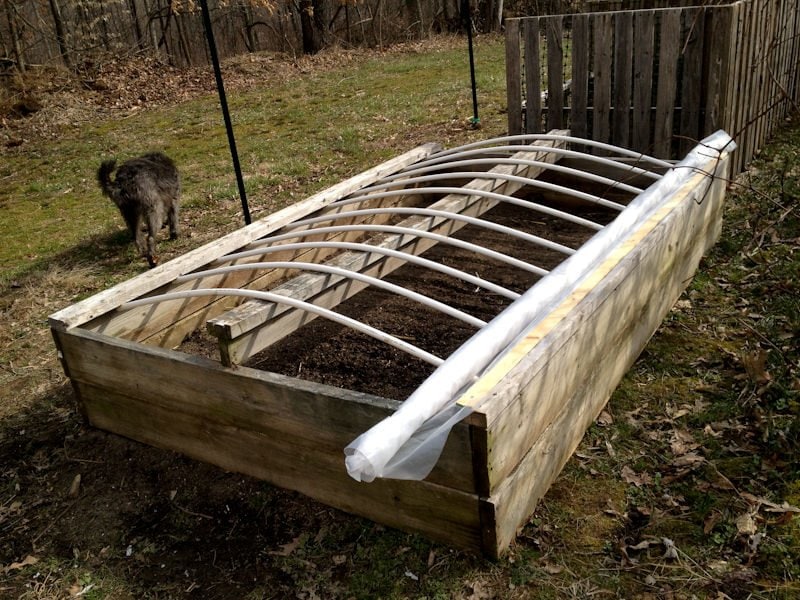 If all goes well, in the next few weeks, we should be eating salads with fresh lettuce and spinach from the cold frame. Woohoo! I can’t wait! 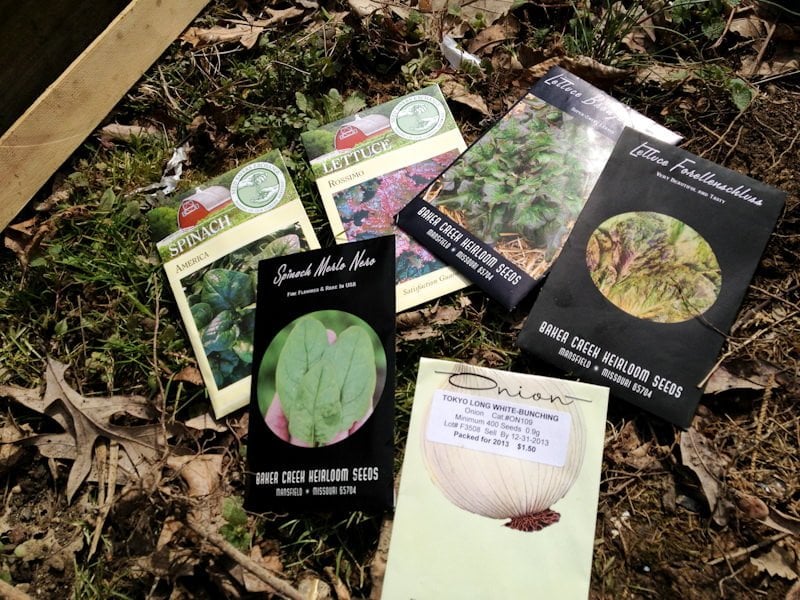 Craig headed inside and grabbed us some lunch (reheated pizza, plus some veggies and dates), and we ate our meal right by the garden. 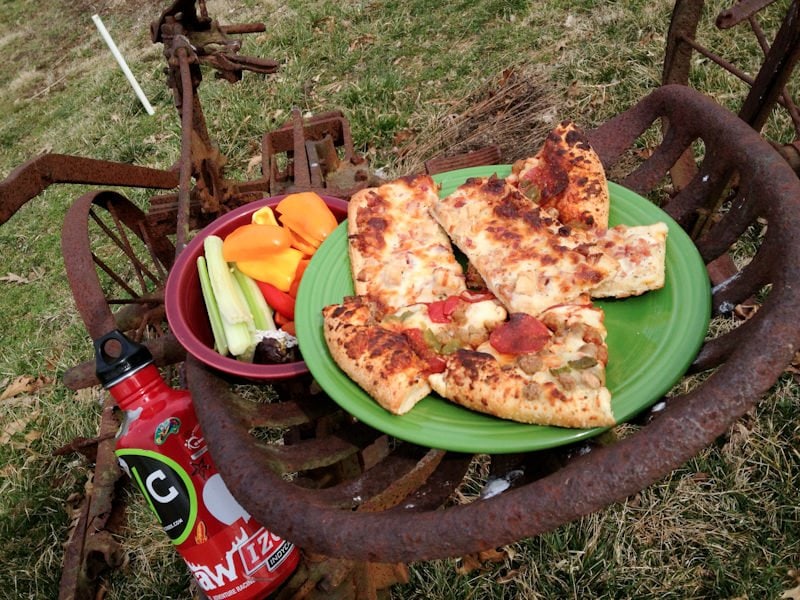 After lunch, we went to tackle some dead grasses around the pool, which meant I spent a lot of time behind our little garden tractor, towing trailer after trailer full of brush to the compost pile. 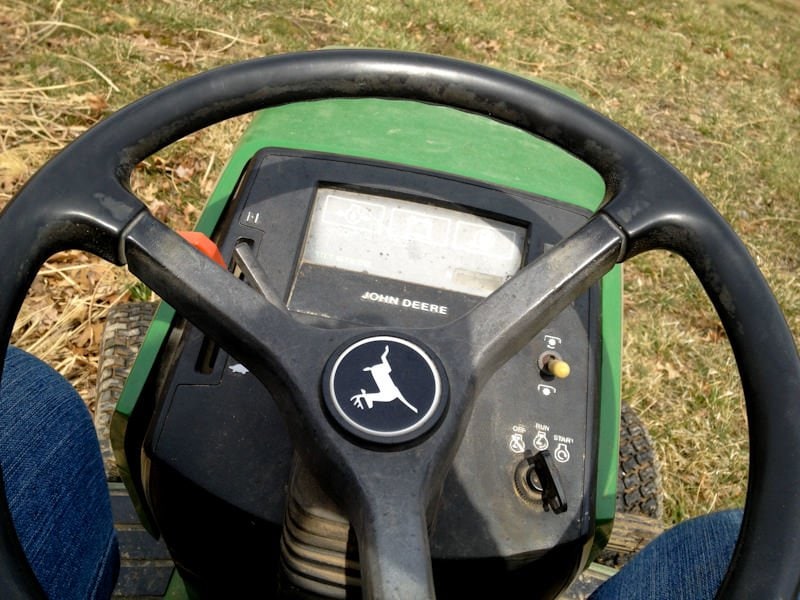 The grasses ended up taking longer than expected, so we had to break in the middle of them and head inside for some very important mid-Saturday TV. IU basketball, son! 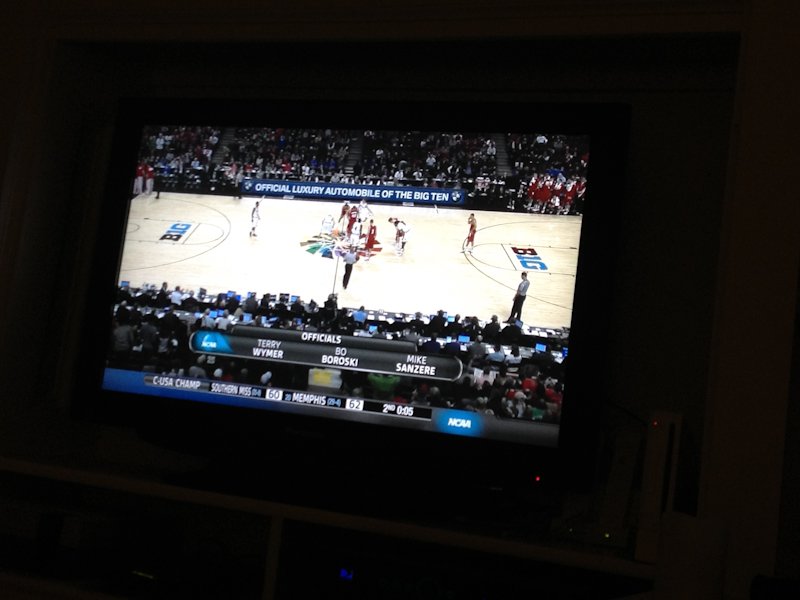 Unfortunately, the Hoosiers ended up losing (boo!), but we couldn’t wallow too long because we still had a lot of daylight to use and a lot of work to do. So we headed back outside. This time in sunglasses and a tanktop because it became very sunny and very warm while we were inside. Rain? What rain? 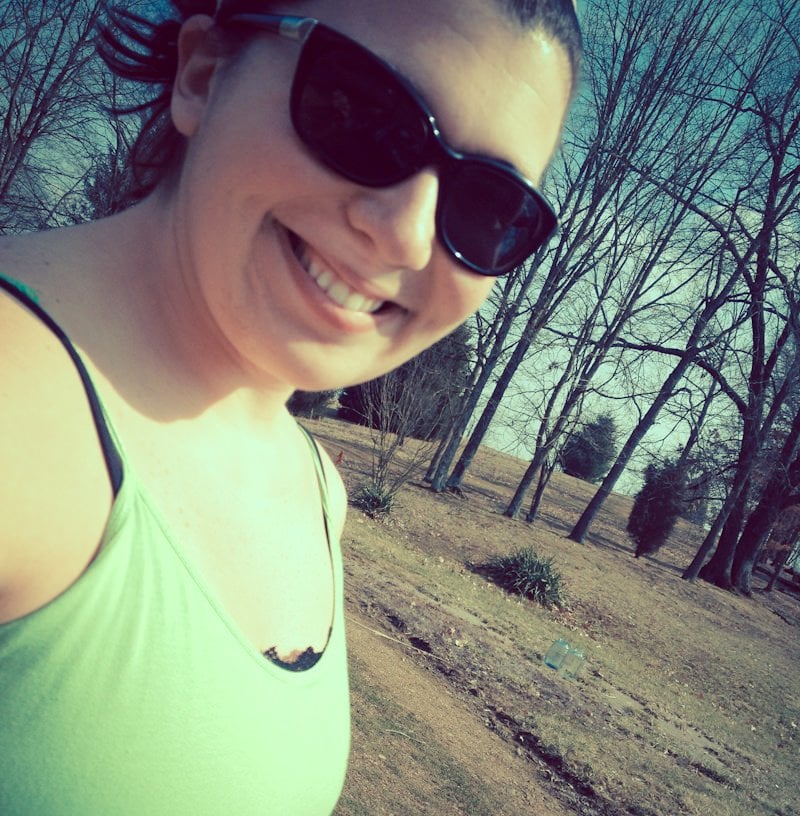 We hacked on the grasses for a little while longer until we were finally finished. And then it was time for pretty much my least favorite task in the whole wide world—sap collection. 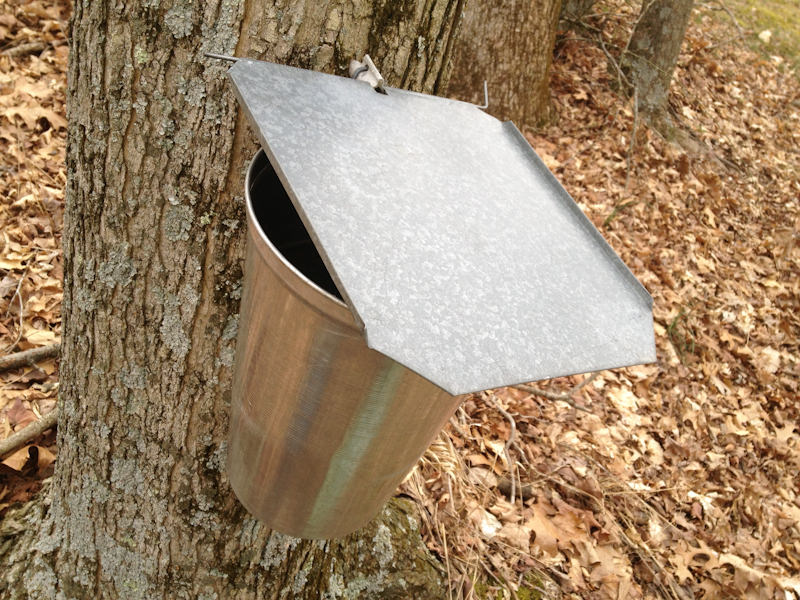 We already have plans in the works for how to streamline this process next year, but this year, we didn’t want to buy more equipment than necessary (especially since we didn’t know if sugaring would work out for us), so we’ve been using things we have kicking around the house for sap collecting. Which means these giant, glass, heavy-as-hell containers are our sap buckets. When full, they’re about 30 pounds each. And the walk back up to the house is about a 1/4 mile of straight uphill pain. 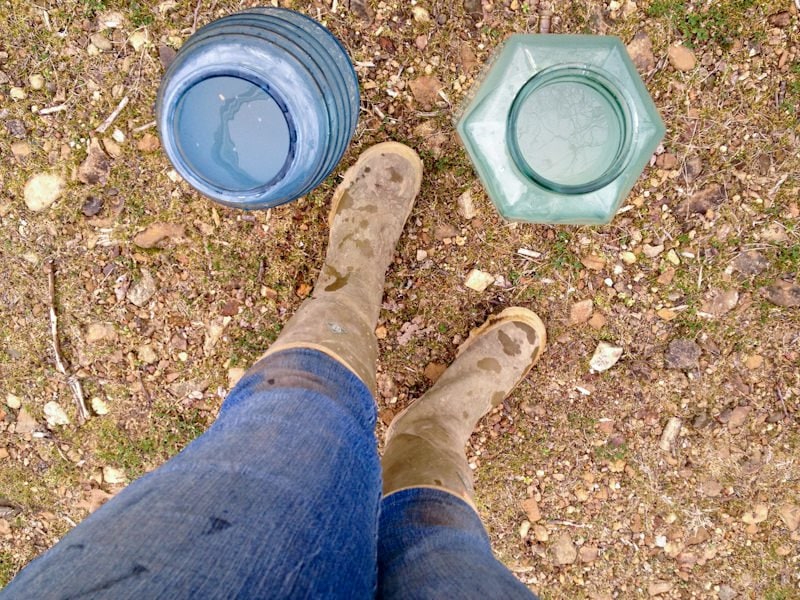 Two trips later, and I was done for. We were planning on starting to work on finishing up our garden fence, but the clouds were starting to roll in and the temperature was dropping, so we decided to call it a day and relax with some drinks and fishing on the lake. Once the temperature got too cold to handle (you know, dropping 20° in an hour, hello, weird Indiana weather) we headed in for some dinner and TV to end out the day. 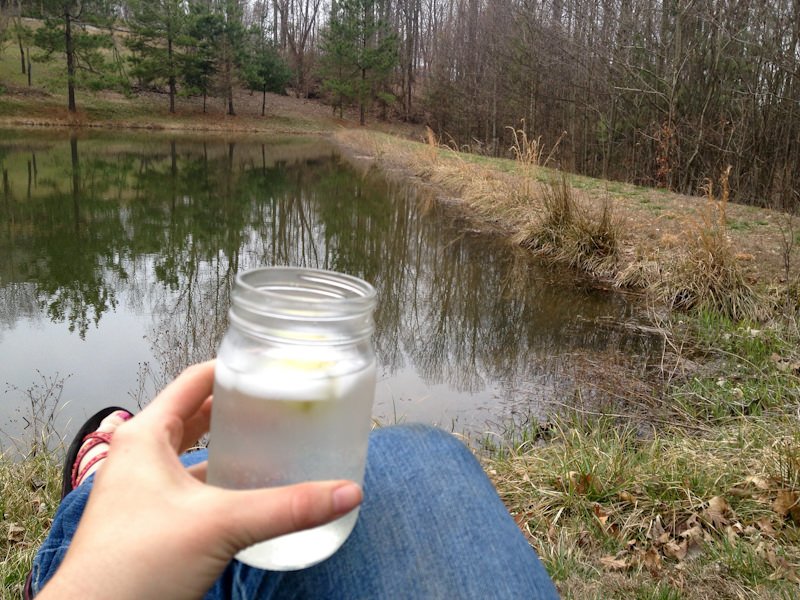 Sunday was a big day for us! Not only was it St. Patrick’s Day, but it was also our 6th anniversary! For our previous five anniversaries, we have absolutely beautiful weather. Sunny, warm, perfect for outdoor adventures. We’d pretty much banked on the nice weather and had planned on going on a hike and picnic, but those plans were squashed when we woke up on Sunday to this. 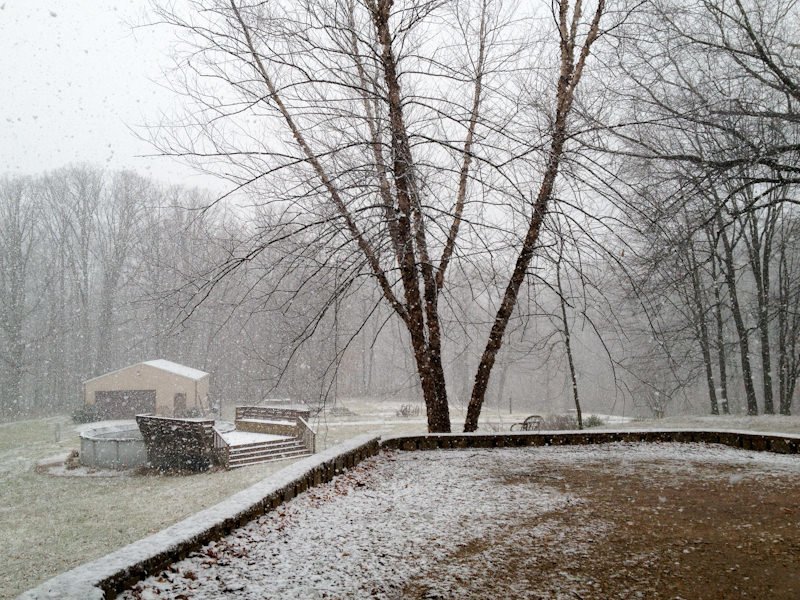 Yup, sun and 72° on Saturday. Snow and 30° on Sunday. We also had thunderstorms on Sunday night. Go home Indiana weather, you’re drunk. 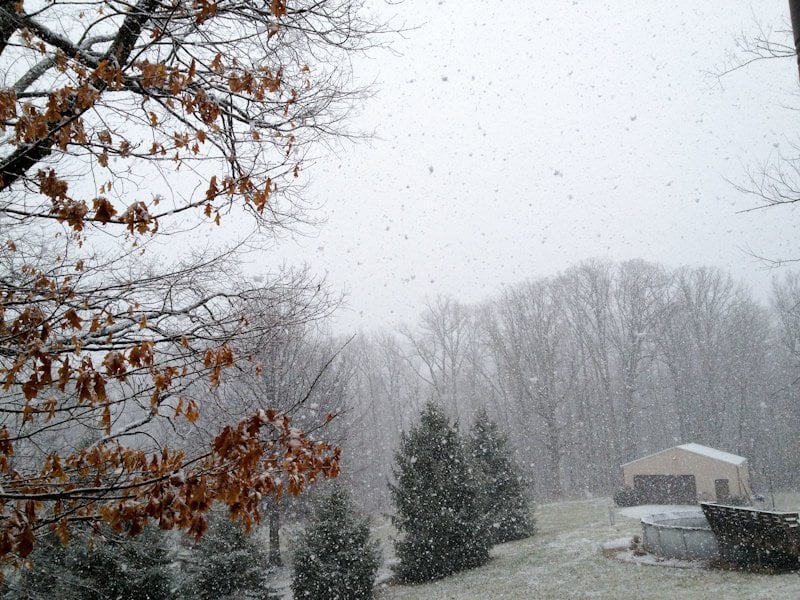 So, instead of heading out in the weather, we decided to clear off our to-do lists and just have a chill day. It turned out to be a blessing-in-disguise that the weather wasn’t cooperating. If it had been nice and sunny, chances are, we would have felt guilty about spending the day on a hike instead of working in the garden. The yucky weather gave us no choice but to just spend a day enjoying our anniversary.

Craig lit us a fire and, for most of the morning, we just laid on the couch in front of the flames drinking tea, listening to NPR and watching the snow fall. I even managed to get some reading in. This may have been one of our last fires for the season, so it was nice to enjoy it together on a lazy Sunday morning. 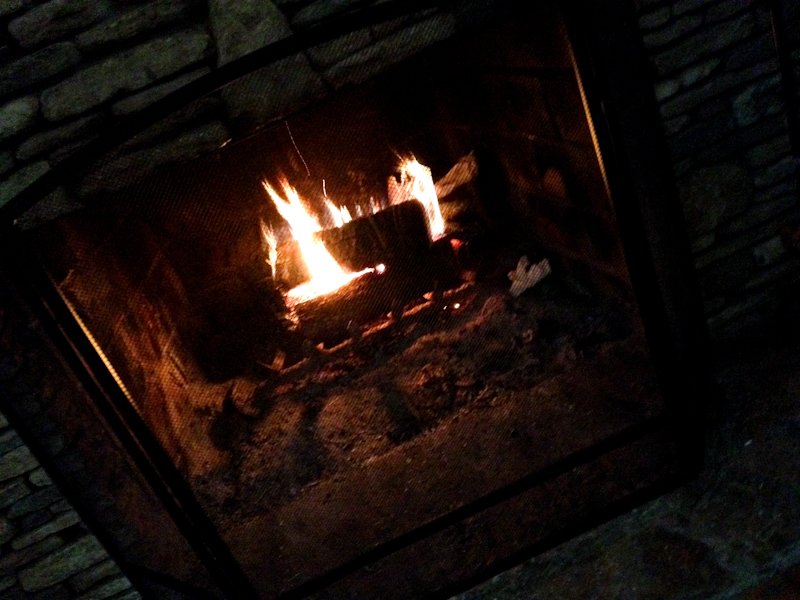 Around lunchtime, I finally pulled myself off the couch and started to pull together our picnic. Just because the weather was yucky didn’t mean we were skipping our picnic! Craig cleared off the coffee table, and we put out a picnic blanket and our spread—meats, cheese, crackers, fruits and wine and champagne. We nibbled and talked and enjoyed the fire. And we were warm and cozy inside. I’d say it was a pretty successful picnic! 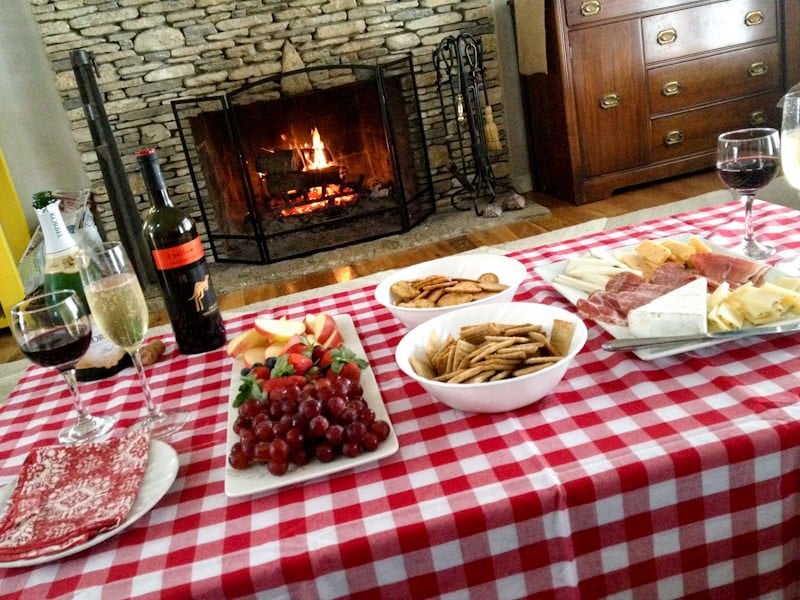 Once our bellies were full, I did a little more reading and Craig did a little video-gaming before we both ended up dozing off into a nap. I hardly ever nap anymore, and dude, I forgot how much I love it. Once we woke up, I did have a little bit of work to do, so I headed to the kitchen. First up, I made maple sugar using our maple syrup. It’s so crazy! You heat it to a certain temperature, and then stir it like crazy (I used my mixer) and that makes it all crystallize and the water evaporate. In the end, you’ve got granulated maple sugar. Science! 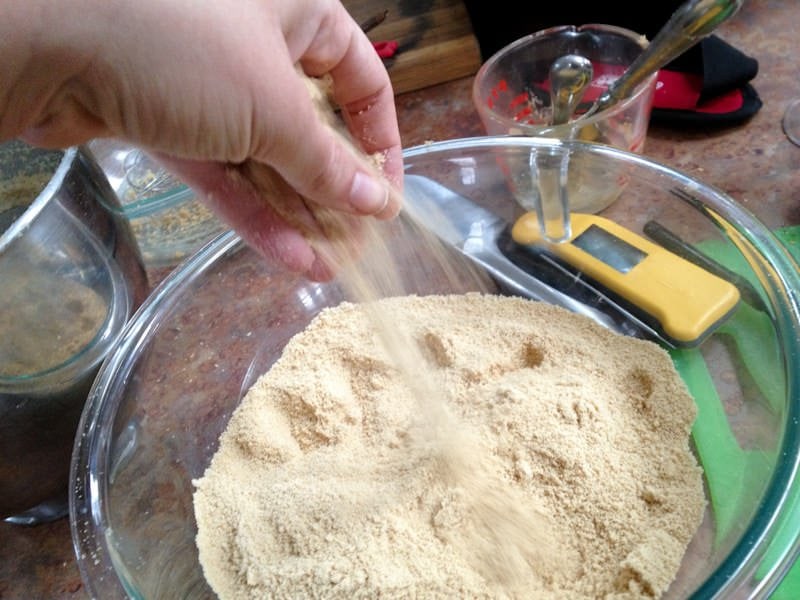 Then I started to work on a recipe you’ll see tomorrow! We had some very important TV viewing that was going to happen that evening, and I wanted to make sure we had a good dinner to go along with it. 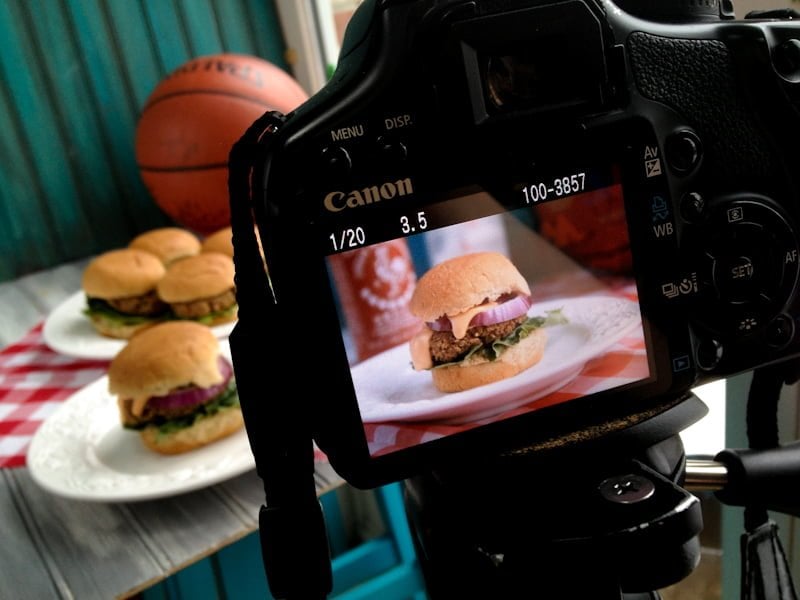 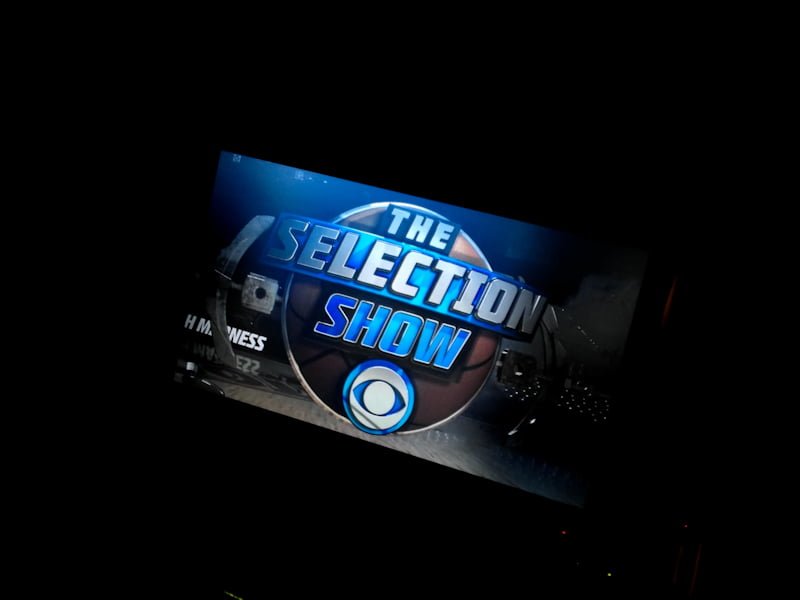 If you’re a basketball fan, you know this is one of the biggest days of the year. If you aren’t, Selection Sunday is where the brackets get announced for the NCAA tournament. You find out when you’re playing, where you’re playing, and who you’re playing. My beloved Hoosiers are a #1 seed, y’all! And we ended up getting a pretty good regional draw. Overall, I’m really happy with how our Selection Sunday went. As tradition, Craig and I both went up to the office right after the show was over (and dinner was eaten) to fill out our brackets. Of course, I have Indiana taking it all, but it’s not going to be an easy road. Not. At. All. 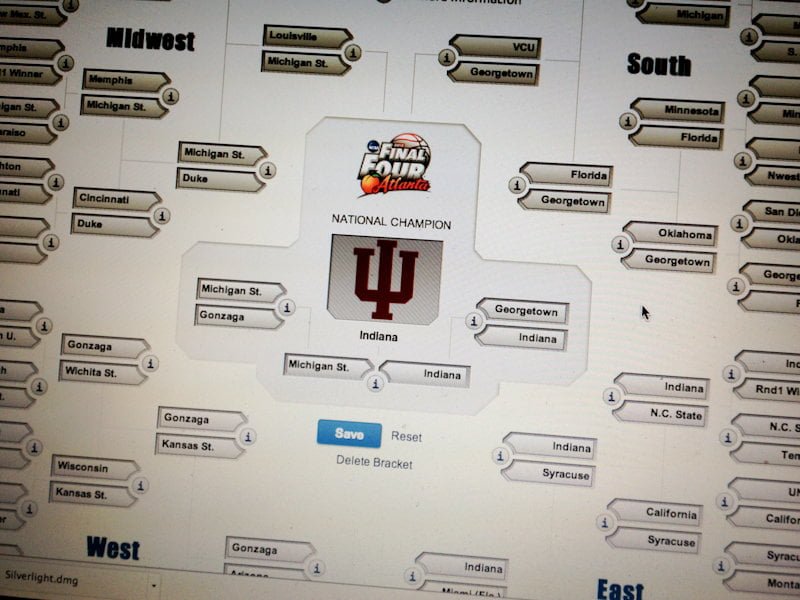 We worked on our brackets for a few hours (and may or may not have filled out a bracket on behalf of Puppy and Kittyface—they pick the teams with the animal mascots), and then it was time for bed. Craig had to get up early in the morning for work, and I had to get up early to catch up on all the dishes that I neglected over the weekend.

Overall, maybe it wasn’t the most exciting way to celebrate our sixth year of marriage (and definitely not like last year’s celebration), but it was still so perfectly us and full of so much love. 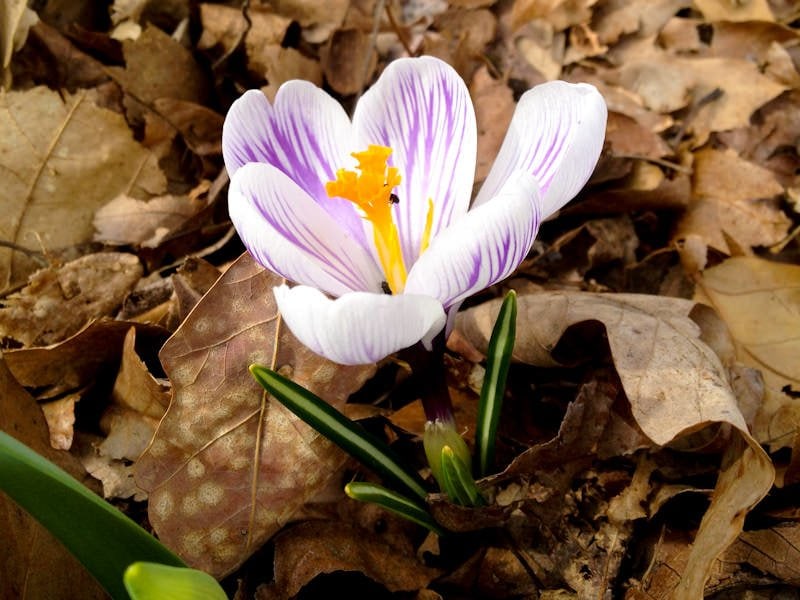 If the weather ends up holding out, this week is going to be super busy for us. In the Spring (and maybe all Summer long) there is a seemingly never-ending list of outside tasks that need to be finished. It’s crazy how much time is devoted to just baseline upkeep and maintenance of 10 acres, and, when you add onto that all the projects we want to accomplish, it’s a lot of work. Good thing we are young, naive and able-bodied, right?

I gotta go shovel something.

How was your weekend? Did you do anything fun? How’d the weather treat you in your neck of the woods?